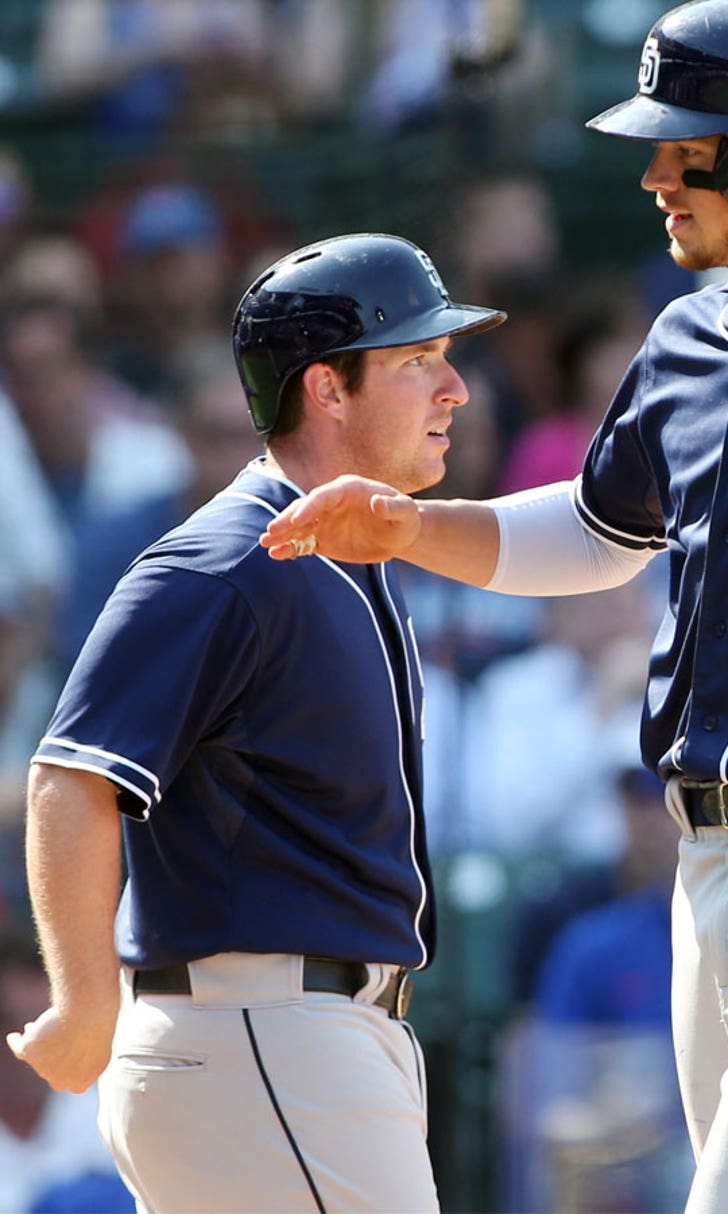 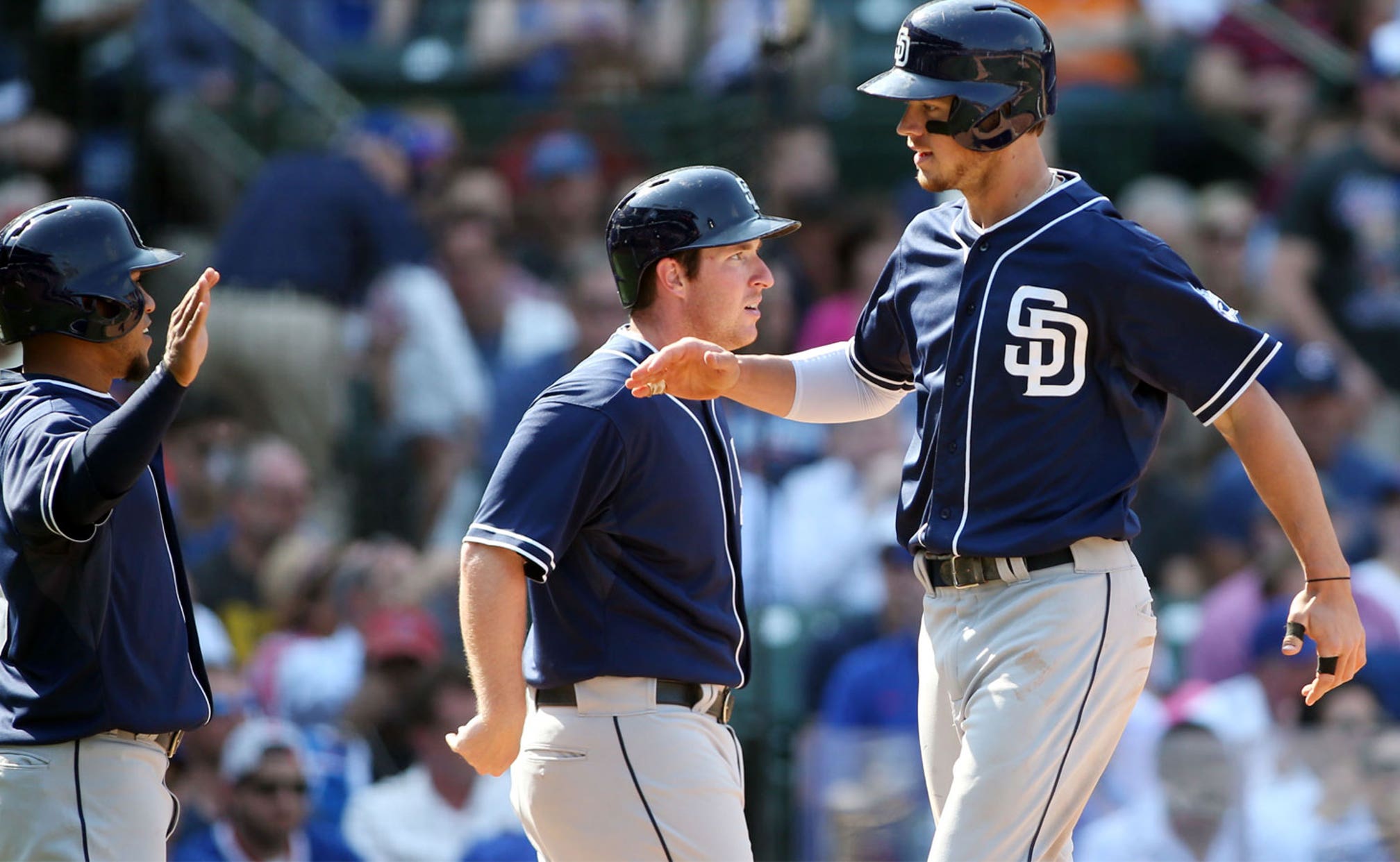 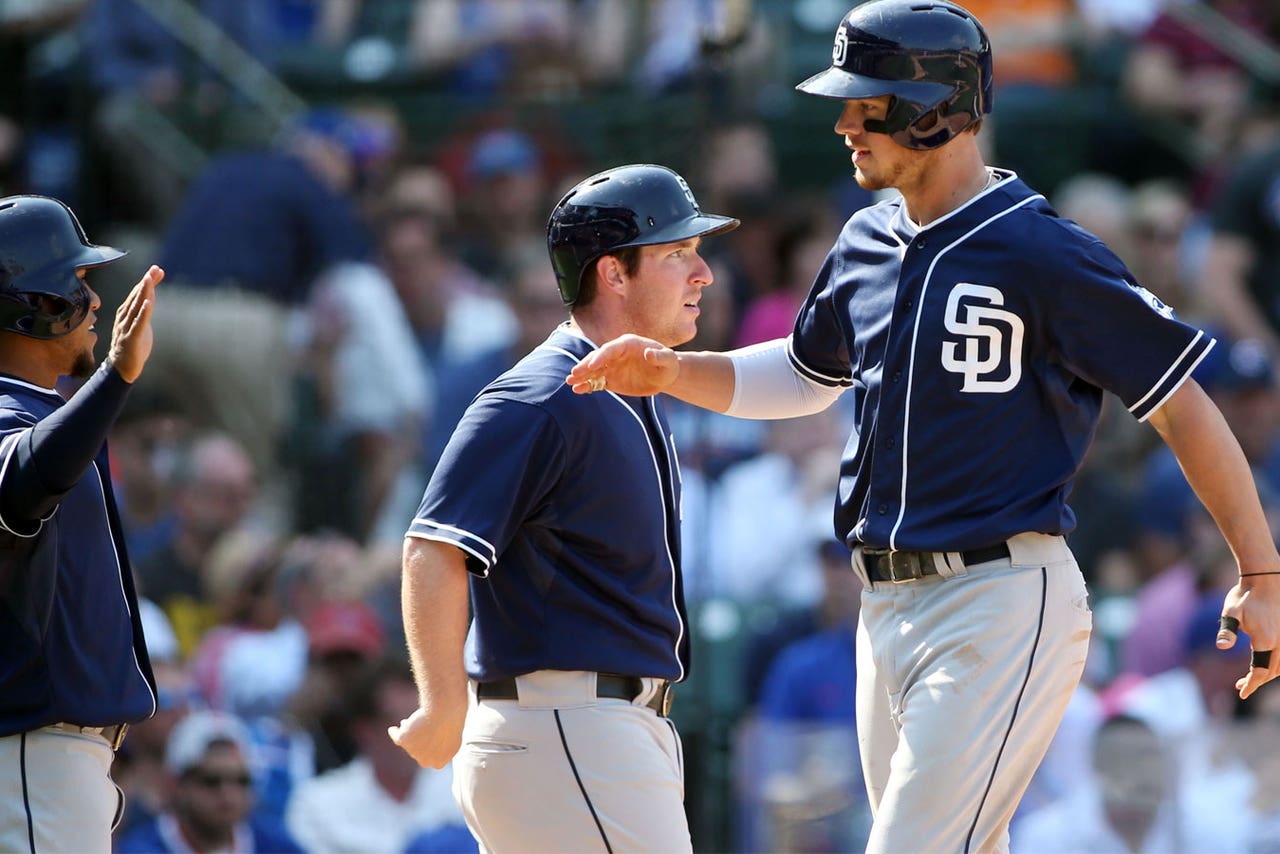 CHICAGO (AP) -- Kris Bryant had such a Chicago Cubs-like start to his major league career.

Called up one day after the team ensured he can't be eligible for free agency until 2021, the prized prospect struck out in his first three at-bats against James Shields and went 0 for 4 in a 5-4 loss to San Diego Padres on Friday.

Seeking their first World Series title in 107 years, the Cubs selected Bryant's contract from Triple-A Iowa and inserted him into their starting lineup as the cleanup hitter and third baseman.

Bryant cleanly handled Derek Norris' sharp first-inning grounder, starting a 5-4-3 double play. Following a two-out walk to Anthony Rizzo in the bottom half, Bryant was given a standing ovation as many in the crowd took photos.

With fans still on their feet, Bryant swung through three pitches for an inning-ending strikeout. He foul-tipped an 89 mph cutter on the low, outside corner, then swung over a pair of changeups.

Bryant fell behind 0-2 when he batted leading off the fourth, worked the count full and then swung over another changeup. With a runner on first and two outs in the fifth, he made a diving playing to his right to snag Norris' liner, keeping the score 2-all. After the Cubs scored twice in the bottom half, he struck out on a cutter with runners at second and third.

Wil Myers' three-run homer off Brian Schlitter (0-1) put San Diego ahead 5-4 in the seventh -- Cubs manager Joe Maddon was ejected by plate umpire Sam Holbrook in an argument that followed. In the bottom of the inning, San Diego intentionally walked Anthony Rizzo, and Bryant hit an inning-ending forceout to third with two on.

Shields (2-0) allowed four runs -- three earned -- and five hits in six innings with nine strikeouts. Craig Kimbrel pitched a one-hit ninth for his fourth save, retiring Jorge Soler on a game-ending groundout with the potential tying run on second and Bryant on double deck.

San Diego has won three straight and six of seven.

On the field before the game, Bryant embraced his father, former Boston minor league outfielder Mike Bryant. His dad watched from the stands next to his son's agent, Scott Boras.

Kris Bryant said he got only three hours of sleep before Friday's game.

"Time of my life really," he said. "Can't really put into words how good of a feeling this is to work for this your whole life and finally get that chance."

Friday was Day 13 of the season, which means Bryant could at most accumulate 171 days of major league service. Because 172 days of service count as a year, he could have been eligible for free agency after the 2020 season had he been on the big league roster earlier.

"I said my expectations are that you play hard and enjoy yourself," Maddon said.

When Bryant was sent to the minor leagues on March 30, players' union head Tony Clark said "this decision and other similar decisions made by clubs will be addressed in litigation, bargaining or both." After Bryant was brought up Friday, Clark said in an email to The Associated Press: "nothing new to offer at this point."

Chicago third baseman Mike Olt was put on the disabled list Friday with a broken right wrist, a move retroactive to Wednesday. Cubs president of baseball operations Theo Epstein said Bryant would not have been called up if Olt had been able to play.

Epstein said the Cubs would have preferred Bryant's debut to come on the road.

"We would have done it a little bit later," Epstein said, "but you can't script everything out in baseball."

Selected by the Cubs with the second overall pick in the 2013 amateur draft, Bryant joins a young core that includes Rizzo, Soler and Starlin Castro.

"I think the journey's just starting. This isn't where I want to end. I want to win a lot of games and win for the Cubs," Bryant said. "I think this is a good starting point."

Chicago also placed reliever Neil Ramirez on the disabled list with right shoulder inflammation, a move retroactive to Thursday, and activated outfielder Chris Denorfia from the disabled list following his recovery from a strained left hamstring.

Padres: RHP Ian Kennedy, on the 15-day disabled list with a strained left hamstring said he "felt great" following a 30-pitch bullpen session on Friday and will make a rehab start in an extended spring training game Monday in Arizona. He is expected to throw 70-90 pitches, manager Bud Black said.

Cubs: While Ramirez was placed on the DL, Epstein said "all things considered, we got really good news" from an MRI that didn't show structural damage.