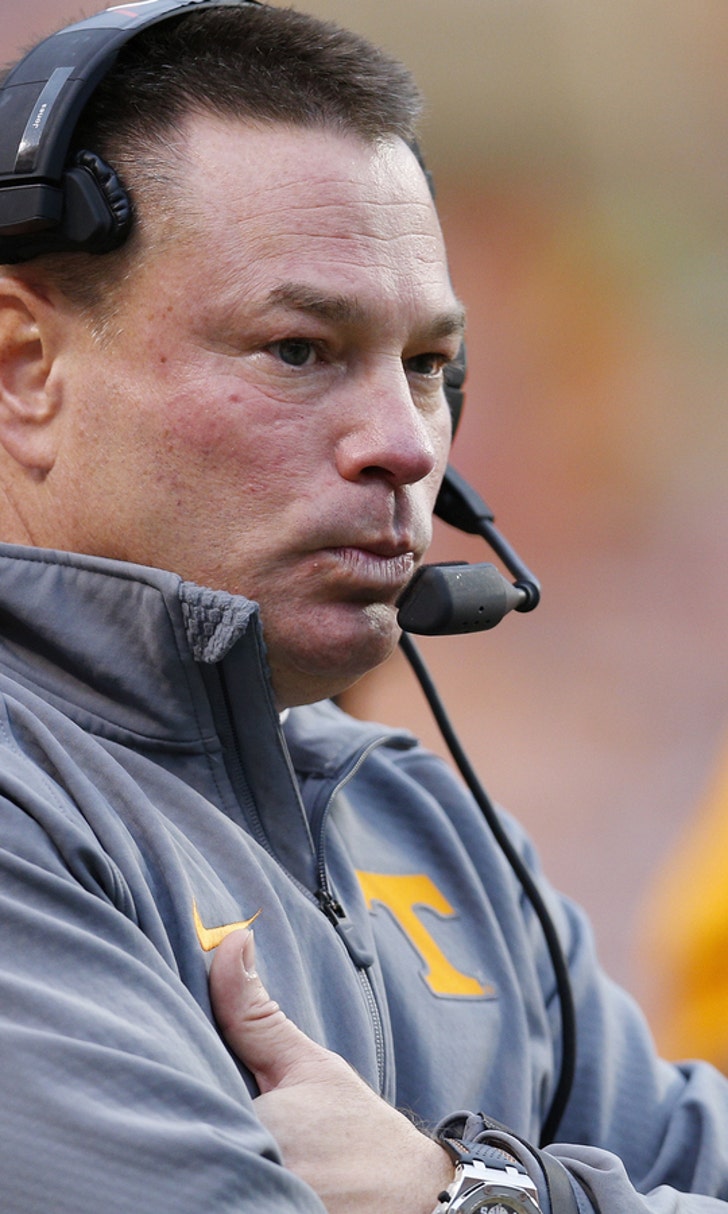 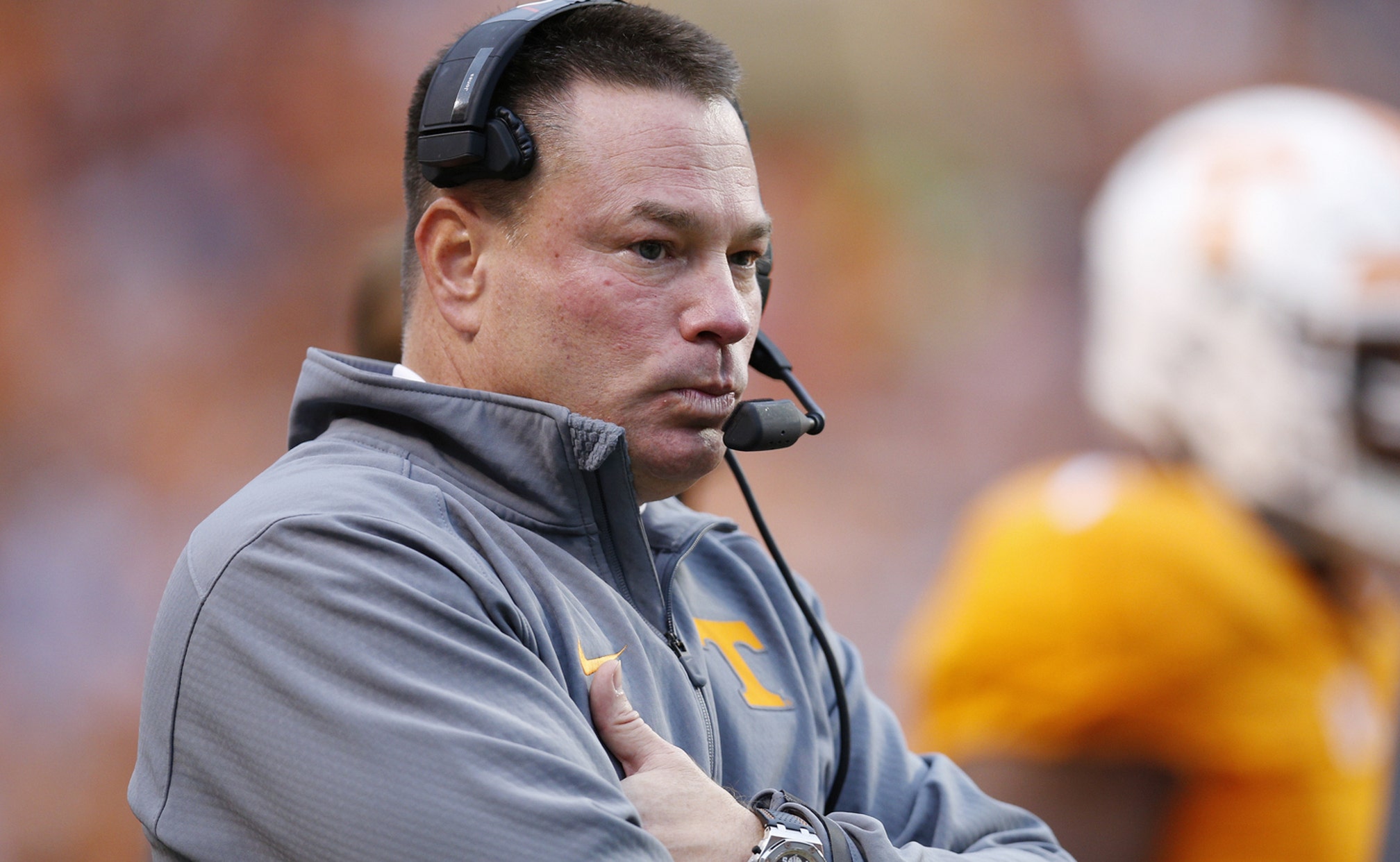 Making Sense of the Mess at Tennessee 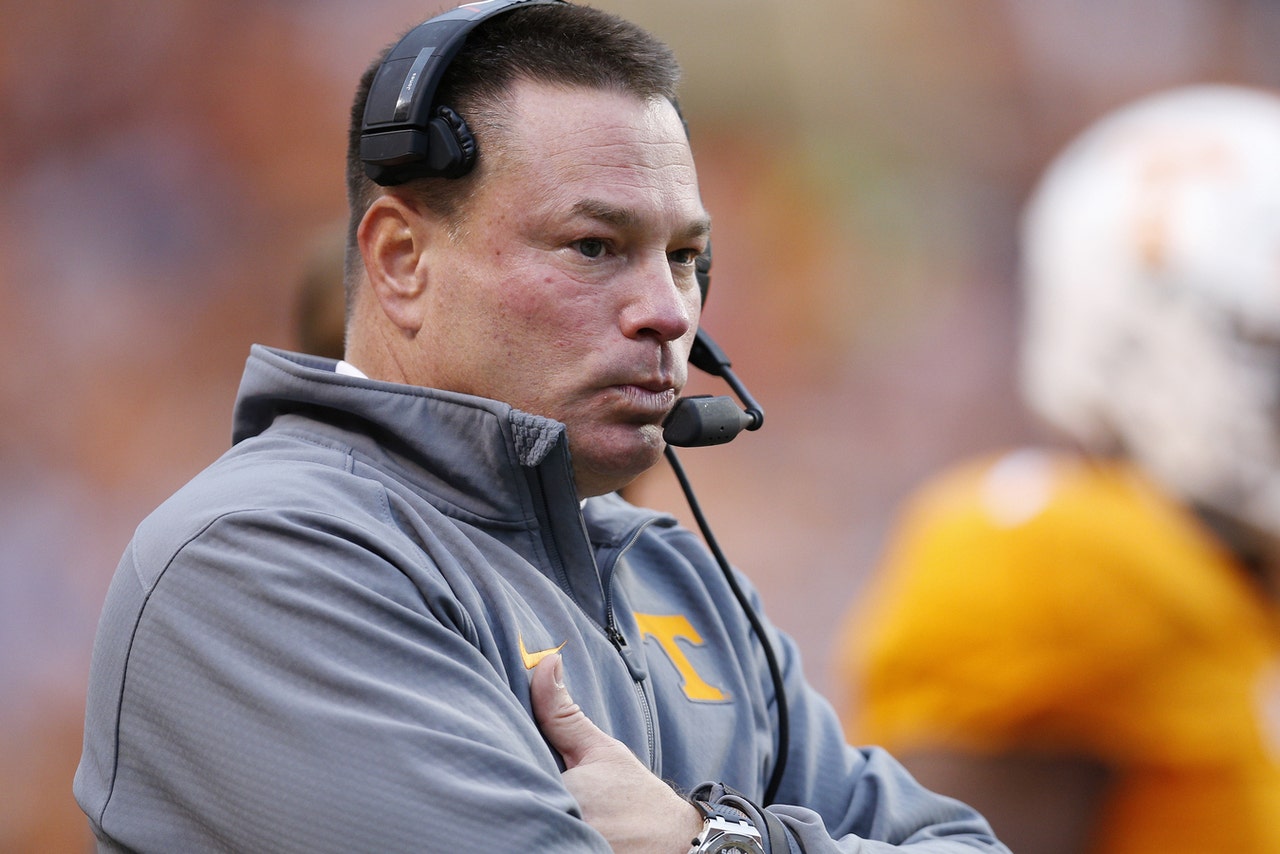 Last night Jones fired back at the allegations stating:

"The assertion that I ever attempted to belittle or demean a young man for taking action to help another person is absolutely false.

To the contrary, I did all I could to assist the former student in question. During the course of the judicial process, campus officials, as well as the young man's own words, will clearly establish that I have done nothing wrong. I will fight all of these false attacks on my character, and I know that once this process has been completed, my reputation will be affirmed."

I know everyone wants an immediate opinion on the case, but this isn't like the Peyton Manning mooning incident because all of the facts have yet to be laid out in the public arena. The criminal case is under seal and the civil case is just beginning. So there are hardly any detailed facts out in the public purview to analyze. This means despite the fact that everyone in a social media era immediately wants to accept allegations as facts, we really don't know very much at all. It's going to take time to determine what actually happened and whether anyone is at fault in a criminal or civil context. Given that these cases are complicated and contain serious allegations, this means Twitter and Facebook run wild with rumor, innuendo, and harebrained theories taking center stage.

So here is my attempt to make sense of what's happening and answer the most common questions I saw.

There are now two cases involving Tennessee athletics winding their way through the court system, one criminal and one civil. On its most basic level criminal cases are prosecuted by the state and jail time is at stake for a defendant charged with a crime. In civil court cases, just about always, money is at stake. The plaintiff is seeking monetary damages for an alleged wrongdoing and the defense is seeking to argue the plaintiff is not entitled to money and no wrongdoing occurred. In a criminal court a defendant must be guilty "beyond a reasonable doubt." In a civil court a jury applies the preponderance of the evidence standard, that is, just more than 50 percent of responsibility would make a defendant obligated to pay damages to a plaintiff.

The criminal case concerns former Tennessee players A.J. Johnson and Michael Williams, both of whom have been charged with rape stemming from a November of 2014 off campus incident. The two men were suspended from the football team the moment the investigation went public, and neither man played for Tennessee after the incident in question. Presently Williams is scheduled for trial on June 27 and Johnson is scheduled for trial on July 18th. Assuming these cases go to trial, many of the uncertain issues discussed below will be resolved in their criminal trial. Johnson and Williams are the only former players facing criminal charges.

The civil case was filed this month and alleges that Tennessee's Title IX process for sexual assault investigations is flawed. Under Title IX schools are required to conduct their own investigations into alleged campus sexual assaults. It's a well intentioned goal -- protecting women from campus assault -- but most schools are just learning how to conduct these investigations. Unlike a criminal court -- which requires a defendant be guilty beyond a reasonable doubt -- a Title IX investigation applies the civil court standard -- a preponderance of the evidence standard. If you want to know more about Title IX investigations, I wrote several thousand words about them two weeks ago. Just as universities don't investigate murder, kidnappings or bank robberies, I do not believe they should be investigating alleged sexual assaults. I believe investigating alleged felonies should be the job of the police and the police alone.

The Title IX lawsuit was filed by a plaintiff's attorney on behalf of alleged victims of sexual assault at Tennessee. A plaintiff's attorney typically makes money on a case based on what's called a contingency fee. That is, the plaintiff's attorney is typically only paid if he receives a jury verdict or a settlement for his client. Most plaintiff attorneys take around 35% of the damages their client receives. The plaintiff lawyers and their clients want Tennessee to pay damages because they believe they were wronged by the university's handling of Title IX case. The only part of this case that involves both criminal and civil lawsuits concerns A.J. Johnson and Michael Williams.

2. Drae Bowles, a former Tennessee player, is a witness in both the criminal and civil cases.

It was his allegations against Butch Jones that became major news yesterday.

There are several questions about what Bowles said. First, did Bowles testify in front of the grand jury? That's unclear since grand jury proceedings are sealed. If he did testify in front of a grand jury then he would be in major trouble if his sworn affidavit didn't match his testimony. That's at issue because the Knoxville News Sentinel interviewed Bowles after the grand jury proceeding and his responses to the reporter's questions were different than the affidavit he filed yesterday. You can see those responses here.

Did Bowles testify to grand jury? And did newspaper misquote him or is his story different now? This is messy. pic.twitter.com/BJYwoYQTGN

Now, Bowles can lie to the newspaper and it doesn't implicate the veracity of his filed affidavit, but it does call into question why he's telling two different stories. (If you represented Bowles you could argue he was fearful for his safety and lied for that reason.) So a big question here is this: How many different version of the same story has Bowles told and who has he told them to?

3. How much trouble is Butch Jones in?

That depends on a couple of things.

First, can anyone prove that Butch said what he's alleged to have said? How could you prove it? Via text messages -- if Jones texted these things his college coaching career would probably be over -- voice or phone recordings, live witnesses who saw Jones make these comments, or email. The Bowles affidavit says Jones spoke them aloud, that probably means it would be hard to prove Butch ever said these things.

Second, Jones didn't just deny making these comments, he specifically said that Bowles' own words would prove he didn't say them. ESPN's Chris Low reported Tennessee conducted its own independent investigation into this incident. Were witnesses taped during this investigation? If so, did Bowles give a different statement then than he did in his affidavit? If he did then the legitimacy of Bowles's comments could be questioned in civil court depositions.

Importantly, we could have a resolution of exactly what Bowles said when the criminal trials of both former Volunteers happen this summer. He's likely to testify there.

4. Did Tennessee conduct its own independent investigation of this issue? And if so, what were their findings?

ESPN's Chris Low says that Tennessee conducted its own investigation and found no wrongdoing by Butch Jones. How independent was this investigation and what did Tennessee uncover? That will be a major part of the university's defense in the Title IX case.

5. When will we have clarity on any of these issues?

Keep in mind, however, that the vast majority of civil cases never go to trial. I still think it's likely this case ends up settled.

6. Does the outcome of the two criminal court cases impact the civil court case?

Yes, but not necessarily in a direct way.

If the two Tennessee players are found not guilty then it undercuts the plaintiff argument that Tennessee's Title IX system is flawed. Remember, the Knoxville police department investigated all of these cases and only brought criminal charges against two defendants. That means the police didn't believe crimes occurred that could lead to convictions beyond a reasonable doubt in the other cases. If juries find these men not guilty then it would help Tennessee argue that their Title IX policies are adequate.

Moreover, from a public perception perspective, having no one convicted of a crime would go a long way towards arguing that Tennessee's campus culture, while far from perfect, is not toxic as the plaintiff's allege.

7. So has Tennesssee done anything wrong?

You'll just have to wait and see.

And if you're a fan of another school running around gleefully Tweeting or Facebook posting about this case, be careful, your school either is already being sued for this too or will be soon. Baylor and Florida State recently settled Title IX lawsuits, plaintiff's lawyers are smart legal sharks and there's blood in the water here. Most schools aren't capable of conducting adequate investigations into sexual assault allegations because most schools can barely conduct investigations into Chemistry lab cheating allegations. There's lots of money to be made off these lawsuits right now and every major school is going to end up being sued before all is said and done.

Tennessee had an opportunity to settle these cases and chose not to do so because the school believes it has done nothing wrong. The allegations in this complaint have proven damaging, but keep in mind that they're just that, allegations.

Unlike the New York Daily News in the Manning case and ESPN in its subsequent coverage of that case, Outkick doesn't assume that everything in a single plaintiff's filing is true.

Also keep in mind this plaintiff's lawsuit is ultimately about money, Tennessee has it and the plaintiff's and their lawyers in this case want it.

Do they deserve monetary damages for Tennessee's handling of Title IX cases?

Barring a settlement, a jury will decide that a couple of years from now. Until then, we wait.