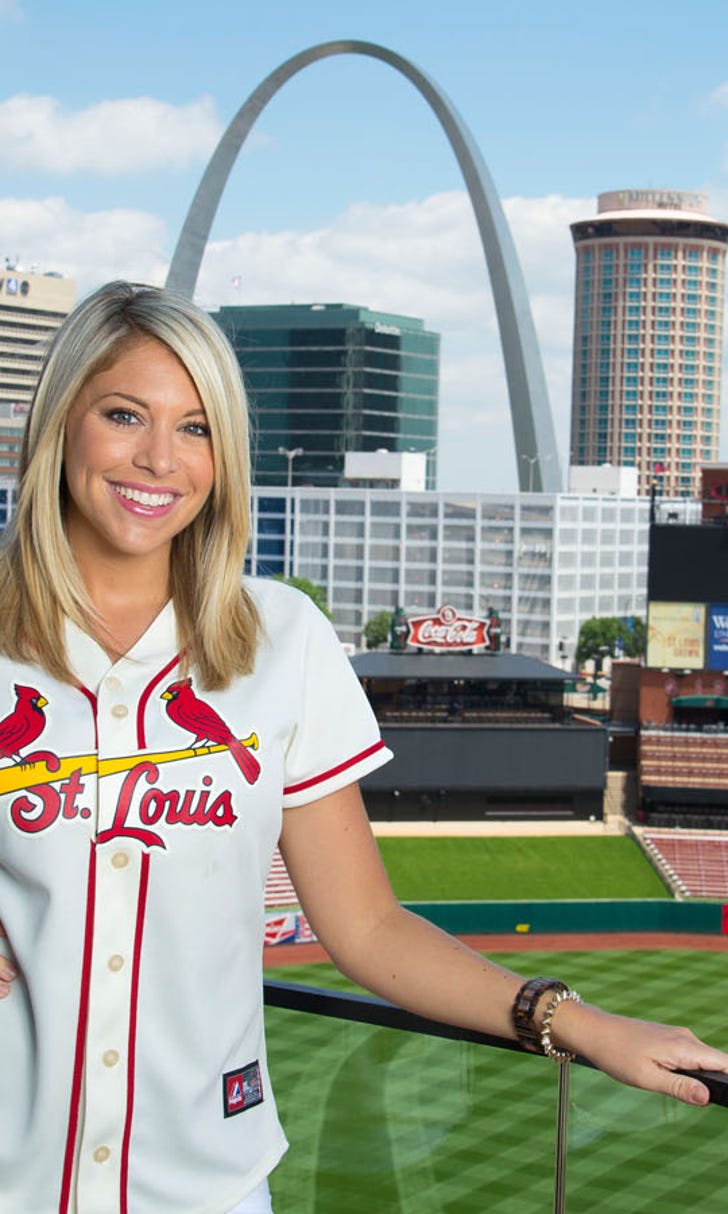 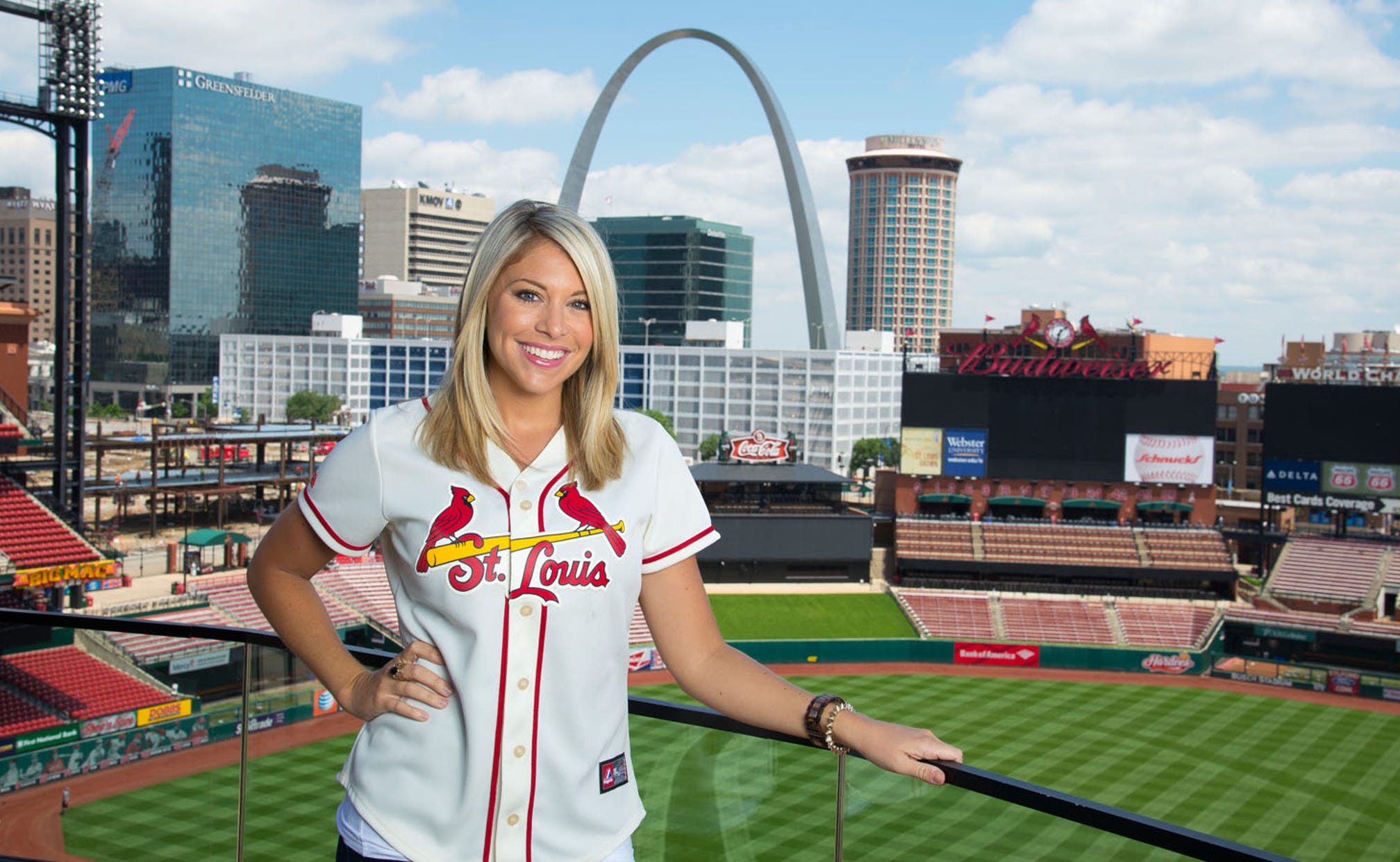 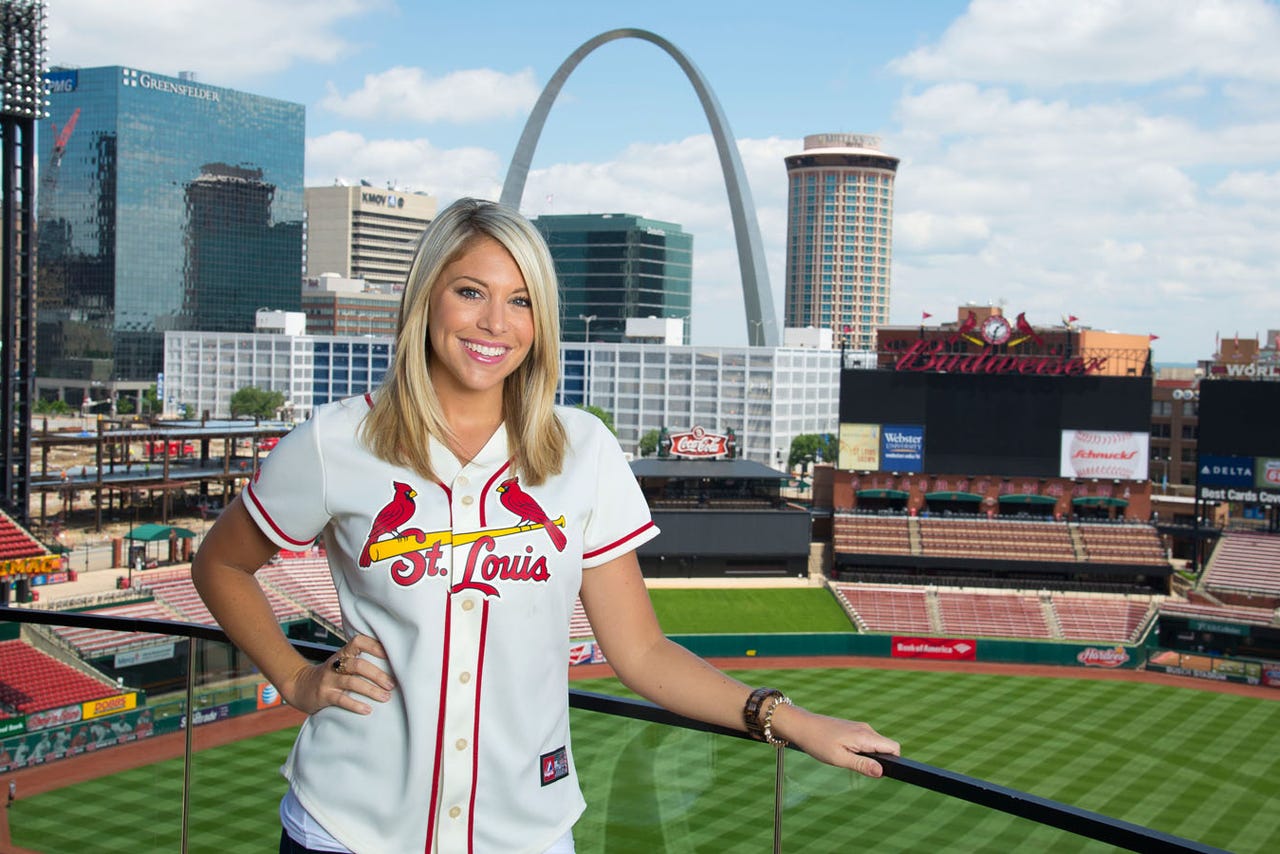 Where were you born: Columbia, Missouri

Tell us how you became a FOX Sports Girls

My story is a little unique. Upon graduation from Mizzou I moved out to Los Angeles to purse a career in the entertainment industry. While living in LA I had the opportunity to assist in several national sporting events. After working these events I realized I wanted to work in the sports world which was my true passion. I contacted my college dance coach to see if she knew anyone at FOX Sports Midwest because I remembered seeing them at Mizzou games. She said she didn’t know of anyone but would ask around. Five hours later that same day she received an email from the Mizzou Athletic Department about this position. I immediately emailed back inquiring about the FOX Sports Girls role. Two interviews and a screen test later I got my dream job! I moved back to St. Louis within three weeks and the rest is history!

What has been your favorite experience as a FOX Sports Girl?

I have had the most AMAZING experiences while being a FOX Sports Girl; it is nearly impossible to pick one.  However nothing beats getting to hang out with our service men and women! I have had the honor of representing FOX in ‘Spring Training to the Troops’ at U.S. Garrison Grafenwoehr in Germany as well as Fort Bragg, North Carolina. We also made a stop at Fort Campbell, Kentucky on our FOX Sports 1 road trip! Getting a glimpse into the daily lives of those serving our country and participating in their training is the most humbling and rewarding experience I have ever had. Seeing the sacrifices our troops and their families make day after day, took my appreciation and respect to a whole new level, which I didn’t think was possible!

What is your favorite sports memory?

My sophomore year in college, Mizzou Football beat KU at Arrowhead Stadium, which put us #1 in the nation. Being a dancer on the Golden Girl dance squad, I got a front row seat to the whole thing.  It was such an incredible experience!  There is nothing like beating your biggest College Football rival!

For the ultimate sports fan, what are the three things you recommend them to experience in your city?

Busch Stadium- You simply cannot come to St. Louis without stopping by for a baseball game at Busch! It is something we Cardinal fans like to call “Baseball Heaven”. Not only will you enjoy the incredible views of downtown St. Louis, but also amazing ballpark food and great games! All while being among the best fans in baseball! It doesn’t get better than that.

Anheuser Busch Brewery- Not only is AB historic to St. Louis but it is also deeply rooted in America and baseball! I highly recommend taking a brewery tour of the world headquarters right here in St. Louis.  My favorite part includes meeting the World- Famous Budweiser Clydesdale's! An added bonus is free beer samples at the conclusion of the tour.

Ballpark Village- The newest addition to St. Louis is our beautiful Ballpark Village! It includes restaurants, shops, nightlife, the Cardinals Hall of Fame & Museum, a 40-foot TV, rooftop seating, as well as our new FOX Sports Midwest Studio! Whether you’re a Cardinals fan or not, this new attraction is a must see!

Who has been the greatest influence on you being a sports fan and why?

Hands down, my father. From as early as I can remember my dad has been the most passionate, live and die by your team, kind of fan. He is the fanatic that every team hopes for; bandwagon is not a term in his vocabulary.  I even recall leaving church early on some Sundays so we wouldn’t miss a noon kickoff. I am 100% the sports fan I am today because of his enthusiasm, knowledge, and love of the game.

If you could play any position/role on any team what would it be and why?

Without a doubt I would play Quarterback. While it can be stressful job I work best under pressure and I think I have the coordination it would take. Not to mention, for a girl, I can throw a mean spiral!  As a backup I would choose Kicker/Punter. With my dance background I feel that is a natural fit.

Girls are involved in many community and charitable initiatives.  Please tell us about your experiences and if you have a favorite charity or group that you work with.

I love how involved FOX is with countless charities on a national and local level. Several that we work with here in St. Louis are, The Mission Continues, Girls on the Run and the Red Cross. The Mission Continues empowers veterans facing the challenge of adjusting to life at home to find new missions. We do service projects with them throughout the summer.  The Girls on the Run organization encourages girls for a lifetime of healthy living. We participate in the 5Ks and attend events throughout the year. We also partner with the Red Cross through Blood Drives with the Blues, Cardinals and Rams.  While every charity is unique in its own way, I absolutely love working with Girls on the Run. Their message is to promote healthy living by taking care of your body and staying active. In this day and age it is so easy for insecurities to creep in due to always comparing yourself to others through the increase in social media. Girls on the Run says that confidence is being exactly who you are and taking care of yourself. I love that!

The FOX Sports Girls participate in the annual Spring Training to the Troops trip.  What ties to the military do you have?  (Family, friends?)

The military is something close to my heart. My grandfather, Norm, is my best bud and a WWII vet.  He was stationed in Korea towards the end of the war. He still has his army hats, canteens and jackets that we used to play dress up in as kids. I love hearing his stories about the war.  My Great Uncle Joe, also served in WWII. He was a paratrooper and fought in D-Day on the beaches of Normandy as well as Battle of the Bulge. He has since passed but I enjoyed hearing his stories about his time serving from my Great Aunt, Flora.

First game you ever attended?

The first professional sporting event I can remember attending was a Kansas City Royals game.  With my dad being from Kansas City, my brother and I had no choice but to be raised on Royals Baseball and Chiefs Football.  Don’t worry, my mom is from St. Louis so we were well-rounded Missouri fans! My first NFL game was between the Chiefs and Raiders at Arrowhead. You can’t ask for a better atmosphere and fan base in the NFL. I even got a kiss from Belly Boy!

Who is your favorite person to follow on social media and why?

I have so many favorite people I follow so picking one is rather difficult. Anyone who can make me laugh is always a favorite. Some include Johnny Hekker and Chris Long with the Rams. While Chrissy Teigen can be outrageous, I find her to be hysterical. I also love following all the sports channels/ shows (specifically FOX Sports Live)/ broadcasters/ writers & experts.  I spend every morning getting caught up on what’s going on in the world of sports.

Are you superstitious? If so, what are some of your pre-game/during the game rituals?

I’m not very superstitious but I do say a lot of prayers! If we win and I’m wearing a certain shirt then obviously its good luck and I must wear it again!

What sports did you play growing up?

Growing up I played a little of everything: T-ball, softball, basketball, volleyball, golf, gymnastics, dance, etc. I never really excelled at sports like I did dance. I took 15 years of classical ballet and Pointe. I then went on to dance as a Golden Girl at Mizzou. We performed at every home football and basketball game as well as Bowl Games. Being apart of the Golden Girls was by far one of the most fun and memorable experiences I’ve ever had!

This one has to go to longest rivalry west of the Mississippi, Mizzou and KU! Although these teams don’t play games against each other anymore (for now) the disgust towards one another is still very real. In college nothing beat a Mizzou/KU game especially in basketball. It’s always anyone’s game when those two teams play. I’ll also throw in the Cardinals and Cubs, it doesn’t get much better than that!

What is your go-to super bowl dish?

Buffalo Chicken Dip! My mouth is watering just thinking about it!

Do you have any sports events on your bucket list?

I am so thankful for the major sporting events I have been able to attend, but I still have a few on my bucket list! Some of those include: The Masters, Super Bowl, Duke vs North Carolina at Cameron Indoor and I literally think I would pass out if I ever had the opportunity to watch figure skating at the Olympics!

What is your favorite sports movie?

Wait. Just one? I have way too many, most of which make me cry. Favorites include: Remember the Titans, A League of Their Own, The Rookie, Little Giants, Rudy, Mighty Ducks, The Sandlot and The Blind Side.

What # would you wear if you played sports?

I would wear 3 because it has always been my favorite number. I was born on the 3rd of December, and it just stuck. However, in the event that 3 were taken I would go with 33 in honor of Tim Riggins…. Friday Night Lights anyone?

What would your walk up song be?

Super Bass by Nicki Minaj, no question! If that doesn’t make fans dance in their seat I don’t know what will. Plus, as an added bonus, I can rap the whole thing!

Name the local sports heroes from your hometown.

Stan Musial- I think it goes without saying, when you think of Cardinals Baseball you think of  ‘The Man’.  Not only was he an incredible talent, he was class on and off the field. Number six is beloved by Cardinals fans young and old and his memory lives on in all of the hearts of Cardinal Nation.

Kurt Warner- Part of “The Greatest Show on Turf” what’s not to love about number 13? His “rags to riches” story is an inspiration. He brought the ST LOUIS Rams a Super Bowl win in 1999 and took them back in 2001. During his time in St. Louis he was awarded two NFL MVP's as well as Super Bowl MVP.

Ozzie Smith- Mr. Back flip himself is and will always be a fan favorite! He is a Hall of Famer and a true Cardinal legend. I have even had the honor of interviewing him. He is so kind and down to earth, you can’t help but love “The Wizard.”

T.J. Oshie- Oshie has always been a St. Louis favorite but after the 2014 Olympics he became America’s darling! He helped Team USA propel to a 3-2 victory over Russia in the preliminary round after the infamous shootout. Off the ice, his fun-loving personality and calm demeanor makes him likeable by all.