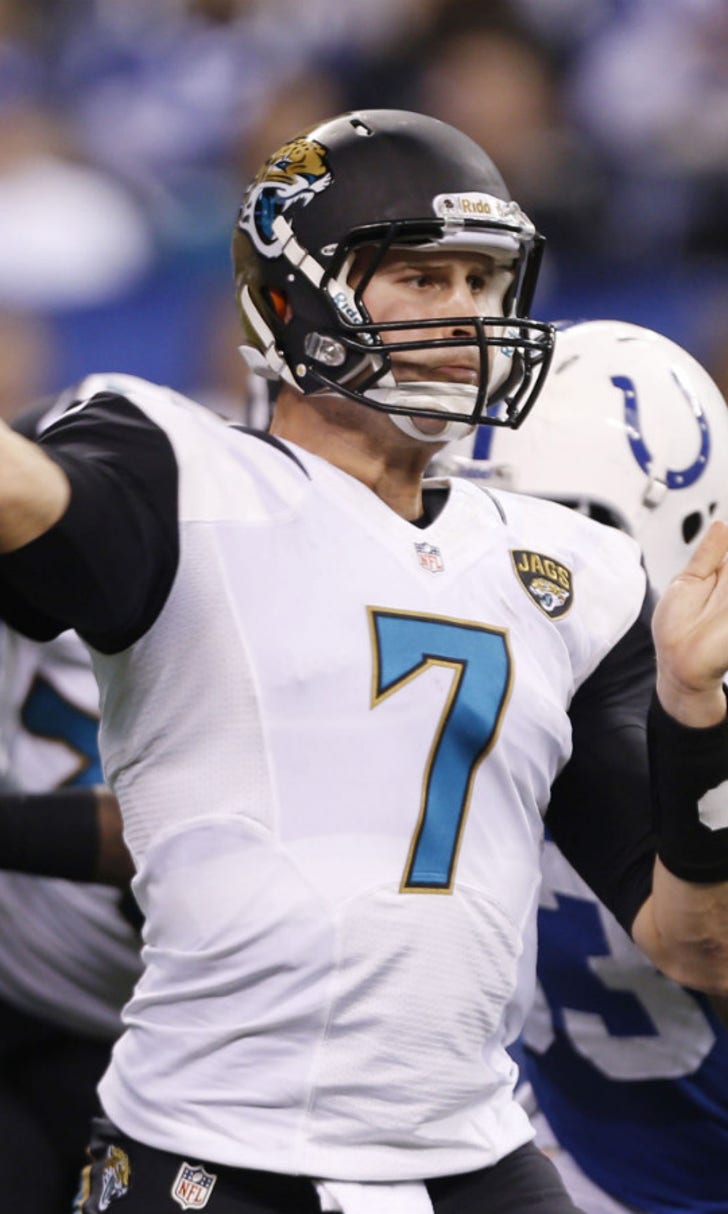 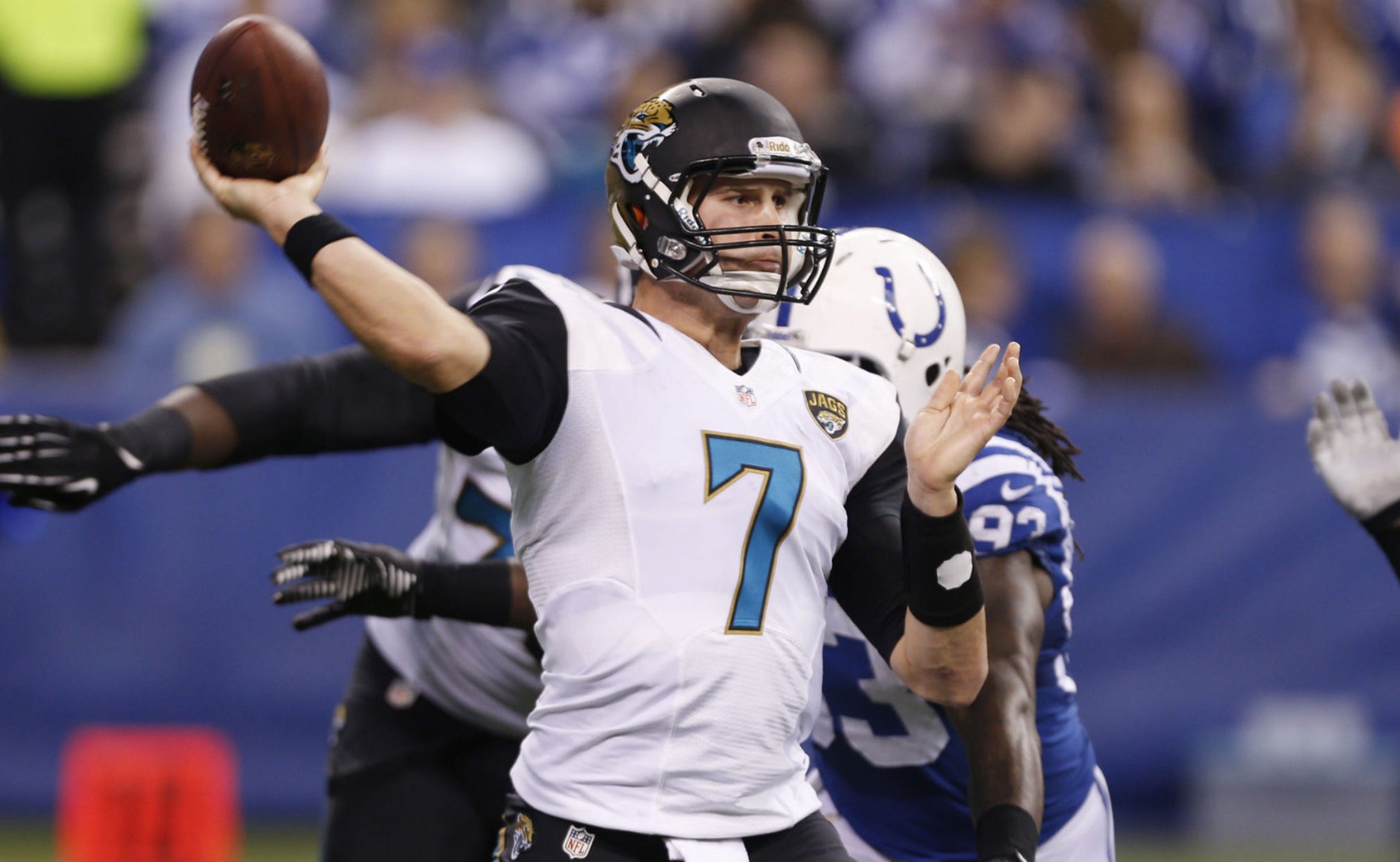 Jaguars have decision to make at quarterback 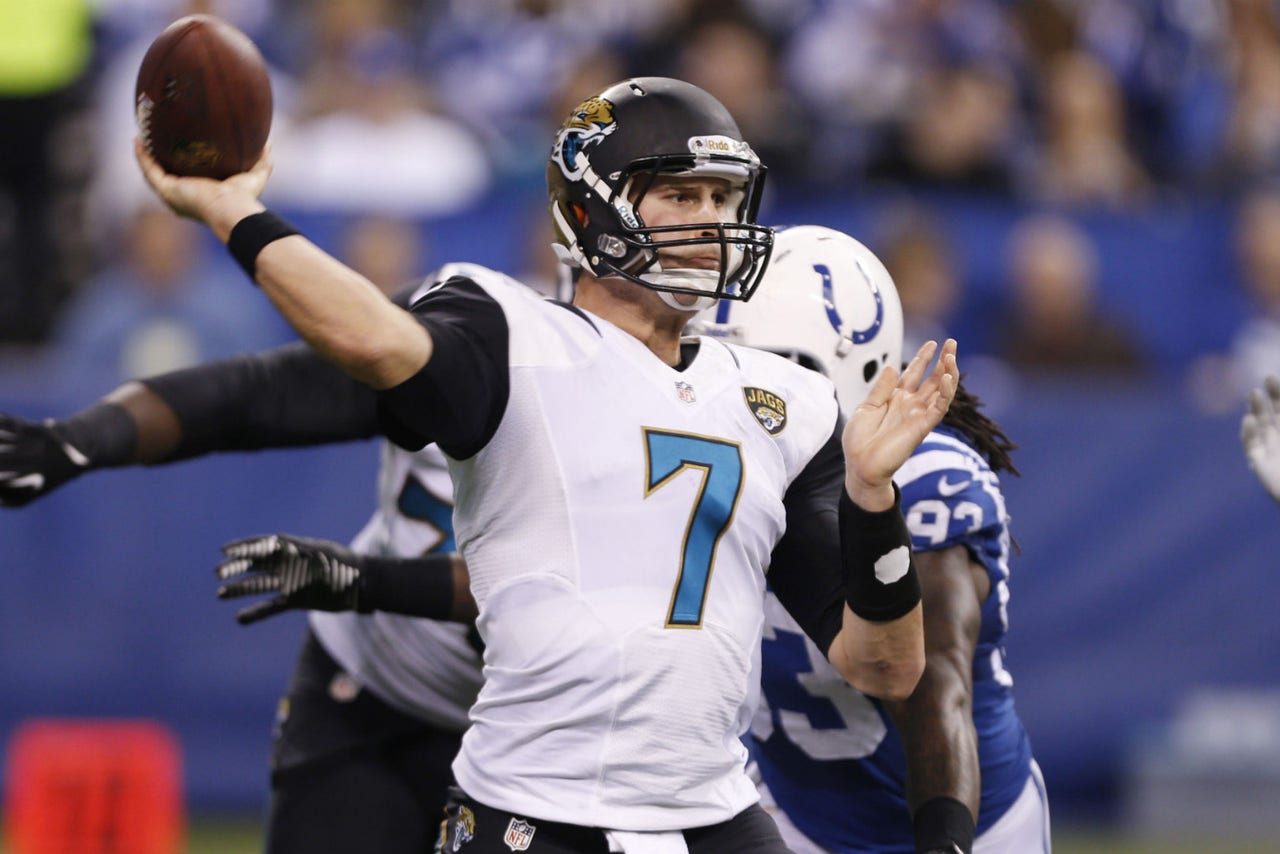 The 2013 season was one of transition and massive personnel turnover for the Jacksonville Jaguars.

But at the most high-profile position of all, the Jaguars finished their first year under coach Gus Bradley the same way they did the previous year -- with Chad Henne.

Ignoring the small but extremely vocal cries by some fans to give native son Tim Tebow a tryout, Jacksonville chose to stick with the two quarterbacks from Mike Mularkey's ill-fated one season as coach.

When the Jaguars failed to score a touchdown in any of their first three regular-season home games and ended October with an 0-8 record, the wisdom of Bradley and general manager Dave Caldwell was being called into question nearly everywhere except inside the team's locker room.

While the Jaguars finished the season as one of two teams (the other being the Tampa Bay Buccaneers) to average less than 300 yards of total offense, they showed tangible signs of progress over their final eight games.

Henne threw for 10 of his 13 touchdowns during that stretch despite operating behind an offensive line that was forced to go without its two starting tackles from Week 1.

Jacksonville ranked 22nd in the NFL in passing, down one spot from the year before. That dropoff was due in part to the unit's failure to throw for as many as 250 yards in any of the first four games. The Jaguars' group of receivers didn't include tight end Marcedes Lewis (calf) for most of the first six weeks and wide receiver Justin Blackmon (suspension) for 12 games.

The Jaguars would like Henne, a free agent, to stay. However, Caldwell said after the season that this is a position which needs upgrading, with the question of whether they'll use the third overall selection in the draft on a quarterback being very much a hot topic.

Chad Henne -- The sixth-year pro completed more than 60 percent of his passes for 3,241 yards, numbers which were almost identical to the ones he compiled in 2010 with the Miami Dolphins. But as was also the case that season, Henne accounted for more interceptions (14) than touchdowns (13).

After throwing for 318 yards Oct. 20 against San Diego -- with most of those coming in the second half after the Chargers had built a sizeable lead -- he didn't record another 300-yard game until the final week at Indianapolis. In an era when NFL quarterbacks are known for their ability to stretch the field with their arms or legs, preferably both, Henne is not a deep threat and will seldom take off running.

Blaine Gabbert -- It's almost impossible to imagine a scenario where the Jaguars would still keep their first-round pick from 2011. In the three games he started over the first five weeks, two ended with injuries and the other saw the Colts hold the Jaguars to 205 total yards and no rushing first downs. A change would do both him and the Jaguars good, in spite of all the complimentary things Bradley has said about Gabbert.

Ricky Stanzi -- After being claimed off waivers Aug. 27 from the Kansas City Chiefs, the third-year pro out of Iowa never took a snap in game action and spent most of his time on the inactive list.

Except for Josh McCown or Michael Vick, a strong case can be made that Henne is the most attractive quarterback on the market. The Jaguars were not overly aggressive in free agency last year, and all indications are Caldwell will maintain that approach in the weeks and months ahead.

Here's where things get interesting: Some mock drafts are projecting Teddy Bridgewater of Louisville to be available when it's the Jaguars' turn to pick May 8, while others have them snatching up Johnny Manziel of Texas A&M.

There has also been a groundswell of support for UCF's Blake Bortles in the wake of the Knights' upset of Baylor in the Fiesta Bowl, although in light of the deaf ear the Jaguars turned to Tebow's avid supporters, don't expect them to spend the No. 3 pick on Bortles solely in the hope of drumming up interest locally and around the state.

All three of them possess the sort of mobility that Henne lacks.

If South Carolina defensive end Jadaveon Clowney and UCLA linebacker Anthony Barr aren't the first two players chosen, the Jaguars could select whoever's still available and take a chance on a quarterback prospect like AJ McCarron of Alabama early in the second round.

Gabbert and Byron Leftwich are the only quarterbacks the Jaguars have drafted with a first-round pick. Odds are that list will soon grow by one.