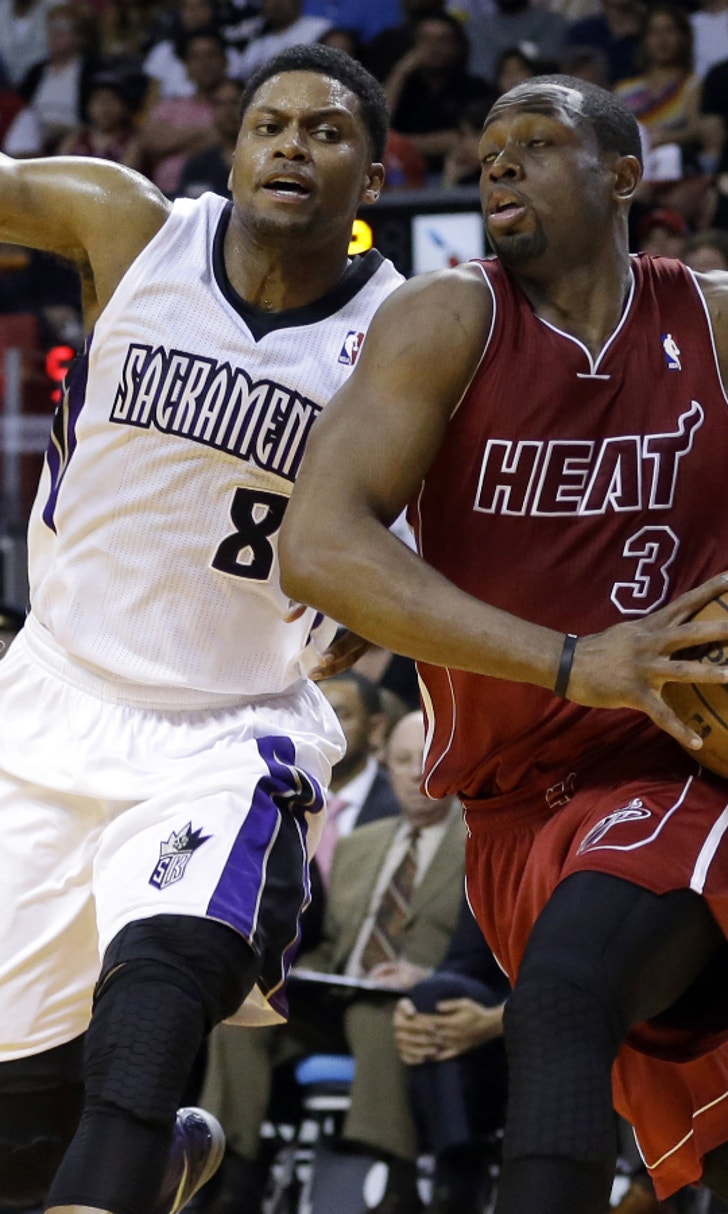 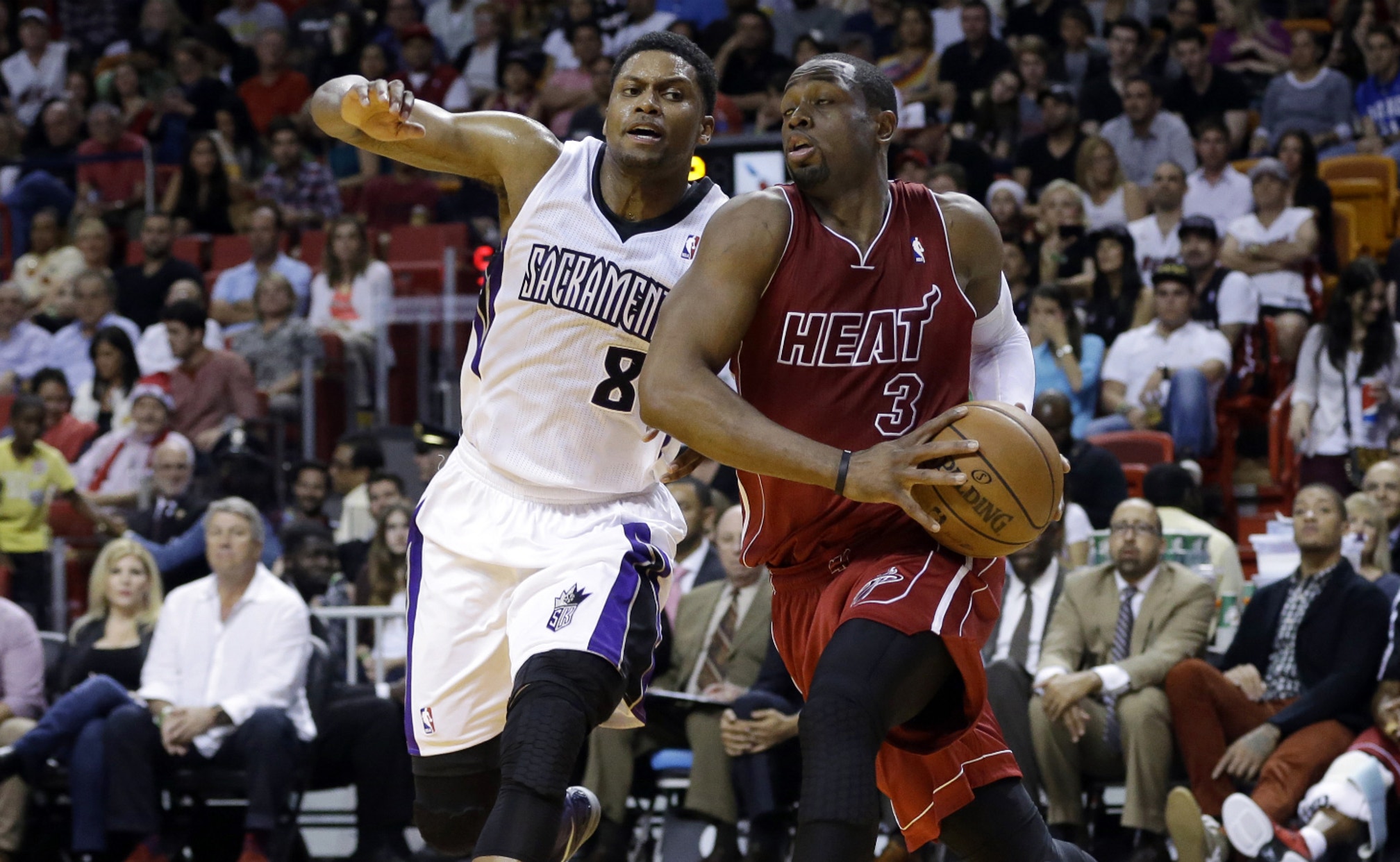 MIAMI (AP) -- Even when the Sacramento Kings did things right, they stood little chance against the Miami Heat.

James was driving to the rim in the first quarter and McLemore decided to try to take the charge, which was quite admirable and predictably futile. James' knee was at roughly the same height as McLemore's chin as he dunked the ball, the most spectacular of the 51 often-easy baskets the Heat got while rolling past the Kings 122-103 on Friday night.

"Sucks that it was him, too," James said. "I like him. I've been talking to him since he was in high school."

Now they have something else to talk about. McLemore ended up on his back, the Heat bench went into hysterics, and it was just one example of how even the right play wasn't going to be enough for the Kings.

They shot 58 percent -- and lost by 19 points. Shooting that well and losing by that much simply doesn't happen in the NBA, or at least, hadn't happened since April 5, 1986, when Phoenix shot 61 percent and lost to Sacramento 119-100.

"Every day in practice, every shootaround, every team meeting, every film session, all we talk about is our defense and obviously the message isn't getting through," Kings coach Michael Malone said. "They're not accepting it. They're not willing to accept it. I'm not sure what the problem is, but I have to find five guys (Saturday) night starting in Orlando who are willing to compete on the defensive end of the floor."

The Heat set a season high for points and flirted with a franchise record for shooting, finishing at 61 percent.

Chris Bosh scored 25 points, Dwyane Wade added 20 and James had 18 points, eight assists and six rebounds while sitting out the fourth quarter for Miami, which has won four straight overall and 18 of its last 19 against the Kings. Ray Allen added 18 and Mario Chalmers scored 16 for the Heat.

"I think we're picking and choosing our spots pretty good right now," Bosh said. "We're doing a really good job of seeing where we can be aggressive and it's working out. If we can continue to pick and choose our spots, keep moving the ball like normal, then things will work out."

DeMarcus Cousins led Sacramento with 27 points and eight rebounds in 32 minutes. McLemore scored 20 and Rudy Gay added 14 for Sacramento, which has now dropped the first three games of its four-game trip.

"It's a great learning experience for me as a rookie going out there and playing the great wings out there," McLemore said. "D-Wade especially and Ray Allen, a great shooter, and especially LeBron, it was a great challenge for me."

Miami has now won 18 straight games over Western Conference opponents, two away from matching the longest regular-season streak ever posted by an Eastern Conference team. Boston won 20 straight over the West during a nine-month span of 1973.

Bosh had 12 points midway through the opening period, the Kings scored more points in the first quarter (36) than anyone had against the Heat since March 2011 and Miami had seven dunks in the first 15 minutes -- two of them by Allen, who entered the season with exactly zero slams and had not dunked twice in the same game since February 2011.

The Heat had 29 baskets in the first half; 21 were either dunks, layups or tip-ins. There were 10 ties and nine lead changes in the half, one where no team ever led by more than seven.

By halftime, it was 67-61 Miami. The Kings shot 66.7 percent in the half and were actually trailing, a somewhat odd and difficult feat.

Bosh, James, Wade and Shane Battier combined for 22 points on 9 for 14 shooting and Miami outscored Sacramento 31-21 in the third, building a 98-82 edge to take into the fourth. The Kings had five turnovers in that quarter, and Miami turned them into 11 points.

NOTES: The games on Christmas Day will have teams wearing short-sleeved jerseys, which is getting mixed reviews in the Heat locker room. "I haven't actually worked out in them too much. I know my shooters are already upset," James said. ... Wade has 24, 27, 32 and 20 points in his last four games, all Heat wins. ... Cousins shot 11 for 15 for the Kings, adding to his strong start this season. ... Sacramento gave the Heat 32 points off turnovers and was outscored 70-60 in the paint.