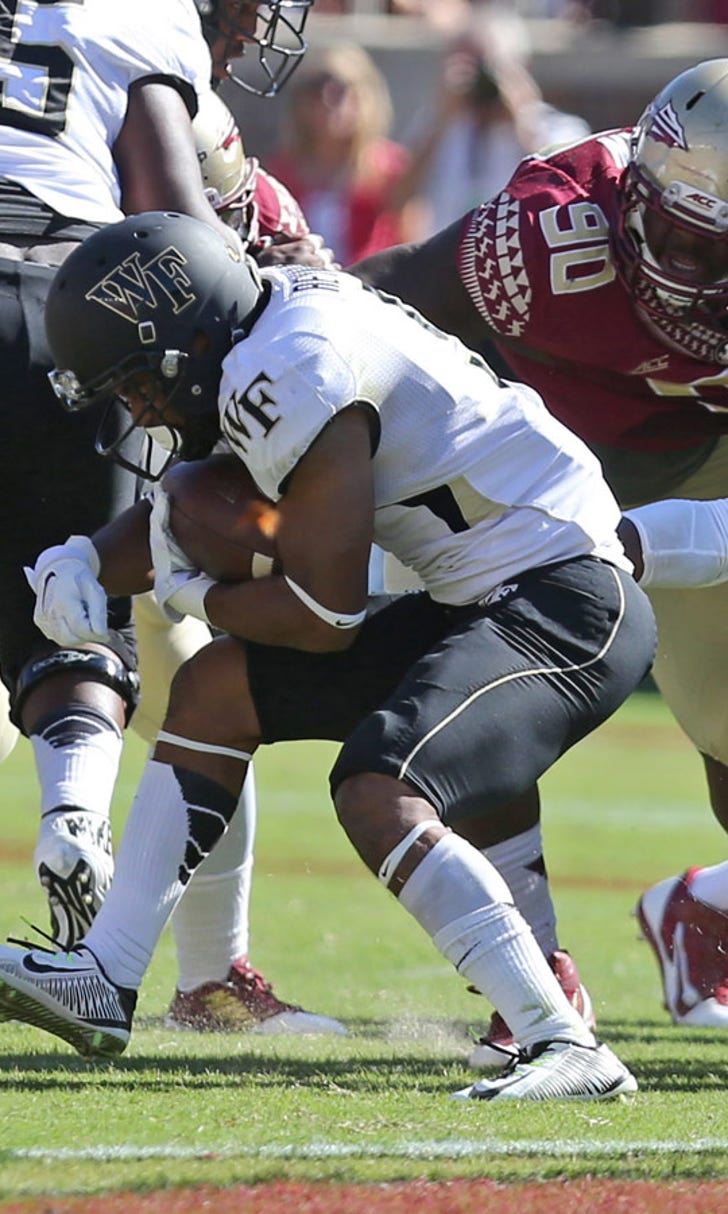 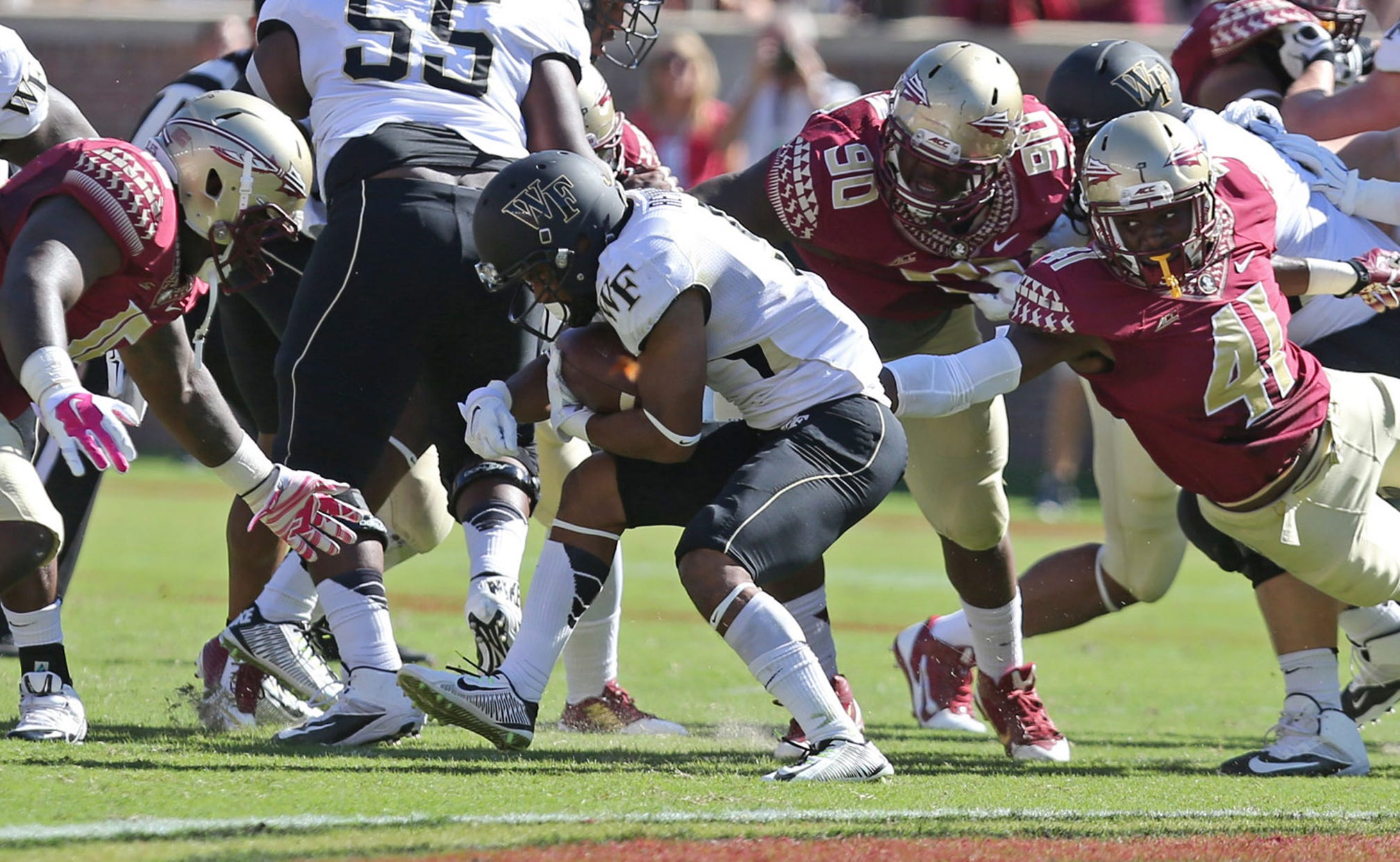 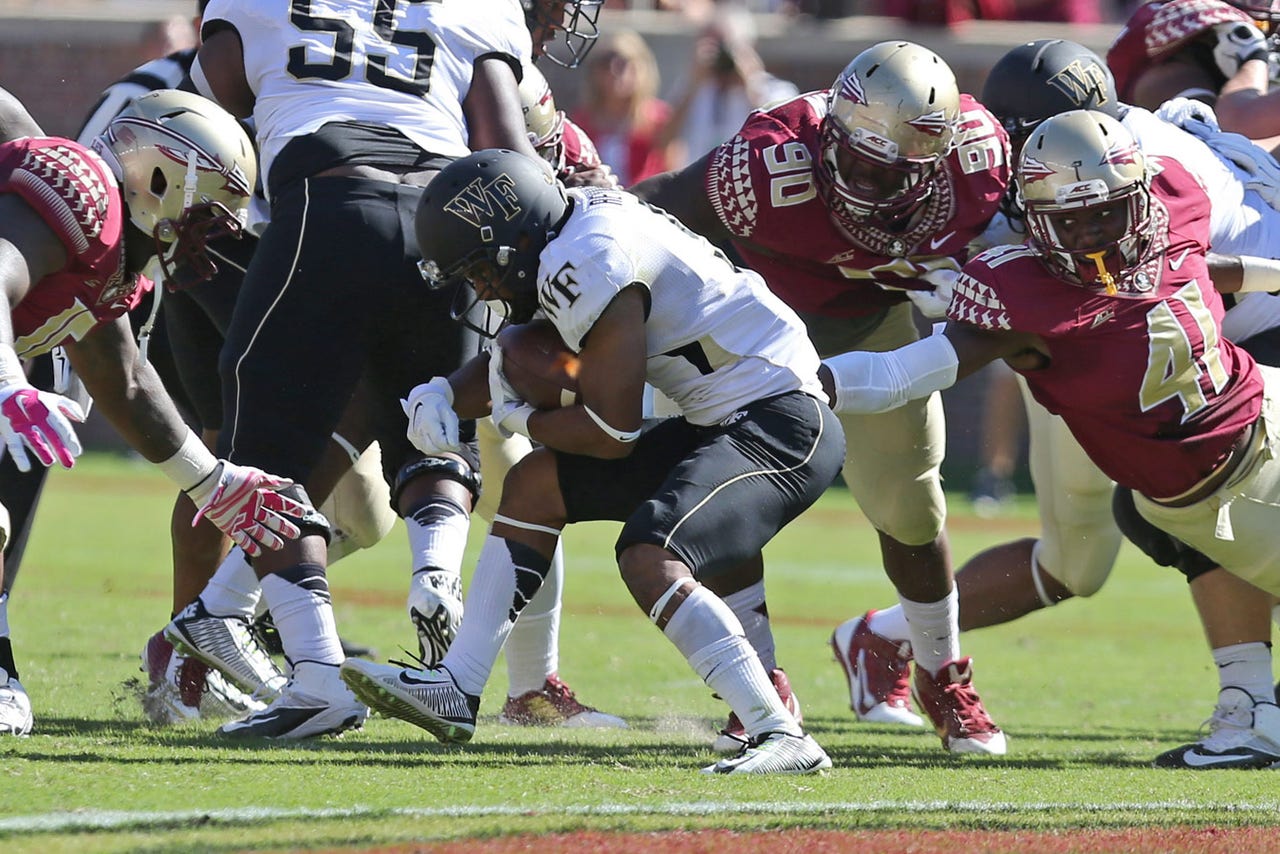 TALLAHASSEE, Fla. (AP) -- The Florida State defense had not looked capable of keeping the top-ranked Seminoles in contention for a realistic shot at a national title through the first four games. Turnovers have been absent and FBS opponents had been racking up the points.

Until Saturday, when Wake Forest traveled to Tallahassee.

The FSU defense ruled the day as the Seminoles eased to a 43-3 victory over the Demon Deacons.

"Totally dominated the game," Florida State coach Jimbo Fisher said. "Defense got some turnovers, which we've been waiting on.

A lackluster effort from quarterback Jameis Winston and the offense allowed kicker Roberto Aguayo and the defense to star.

Winston threw for 297 yards with a touchdown and an interception while Aguayo kicked a career-high five field goals in a single game. The reigning Lou Groza Award winner also set a school record with 21 consecutive field goals.

"I didn't know (about the record) until after the game," Aguayo said. "I did think about it three weeks ago ... but I didn't think about it coming into this game."

The FSU defense simply overmatched the Demon Deacons (2-4, 0-2 ACC) and held them to 126 offensive yards, including 40 rushing. Linebacker Reggie Northrup had the highlight of the day when he forced and recovered a fumble and ran it 31 yards for a touchdown in the third quarter. That put FSU up 30-3. It was the first time the Seminoles held a team to three points or less since a 59-3 win against Syracuse on Nov. 16, 2013.

"At the end of the day when Florida State starts playing Florida State football and defense and offense is all on the same cylinder, we're going to be fun to watch."

Wake Forest quarterback John Wolford was held to 58 yards passing and an interception.

The game took its toll on Florida State (5-0, 3-0) as leading receiver Rashad Greene (concussion) and starting center Austin Barron (arm) both left and did not return. Defensive lineman Derrick Mitchell Jr. and linebacker Terrance Smith did not play due to injuries.

"When our offense struggles a little bit, we definitely come in strong," FSU cornerback P.J. Williams said. "We know we have to make a play for them so they can get back on the field."

Freshman defensive end Lorenzo Featherston was a surprise star for the Florida State defense after making his first career start. He posted seven tackles, including 2 1/2 for loss and a fumble recovery. Wake Forest could not block him early in the first half.

Wake Forest entered as the worst offense in the ACC and one of the worst in the country -- and that was exactly what Florida State needed to work out some bugs. The Seminoles missed more than 30 tackles last week and had allowed 300 yards passing in two of three games against FBS opponents this season. That didn't happen at all in 2013.

"We played well enough on defense and created some plays to stay in the football game," Wake Forest coach Dave Clawson said. "We're struggling on offense. We've struggled all year.

"Florida State has some talented kids up front. We struggled to block them and when we blocked them we struggled to get open. Again, it's not for a lack of effort."

The Seminoles were their own worst enemy in the first half as the offense racked up the yards, but failed to capitalize at the end of drives. The turnovers didn't help, either.

Winston tried to force the ball into tight coverage on Nick O'Leary and safety Thomas Brown tipped the ball to corner Merill Noel, who recorded his second interception of the game.

Wake Forest quickly gave the ball back when Mario Edwards forced a fumble by Wolford that was recovered by Featherston. Four plays later, FSU running back Karlos Williams gave it back on a fumble.

The Demon Deacons responded with their only score of the first half as Mike Weaver finished the seven-play drive with a 36-yard field goal with 1:20 left in the first quarter. Those were the first points Wake Forest has scored in Tallahassee since 2008.

Florida State dominated the rest of the day despite a clunky effort by the offense. The floodgates opened in the second half as Mario Pender punched in a three-yard touchdown and freshman Travis Rudolph caught a 59-yard touchdown from Winston.