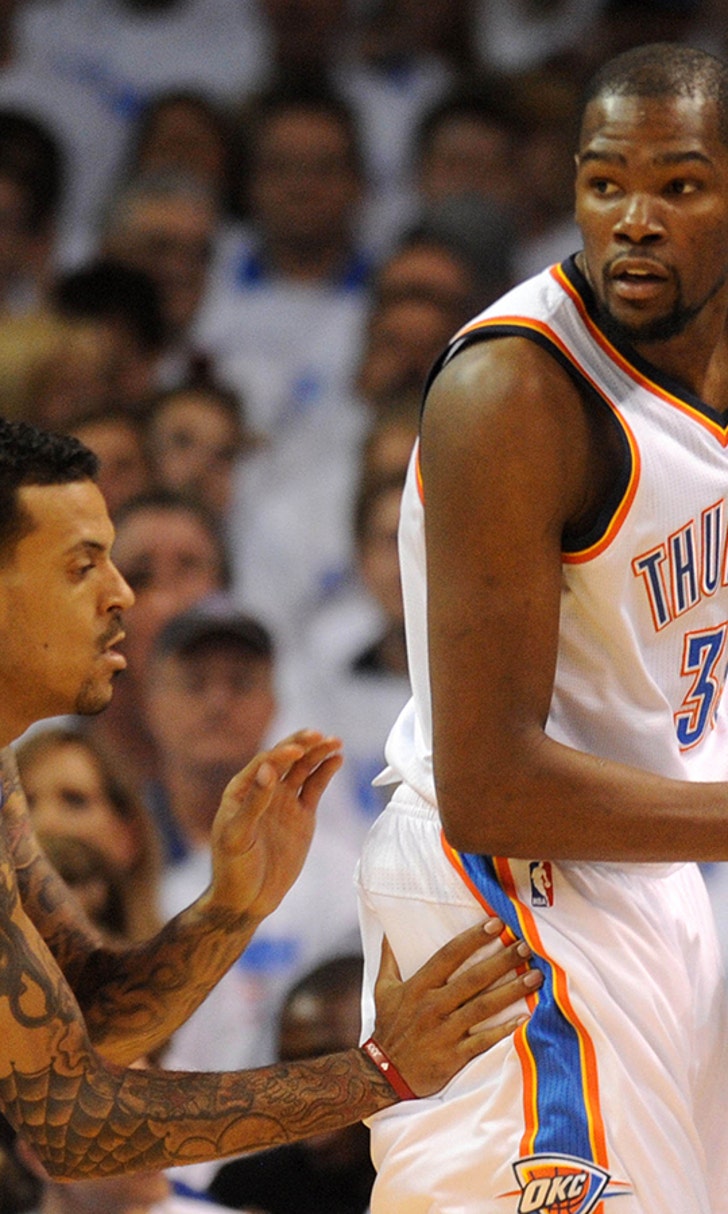 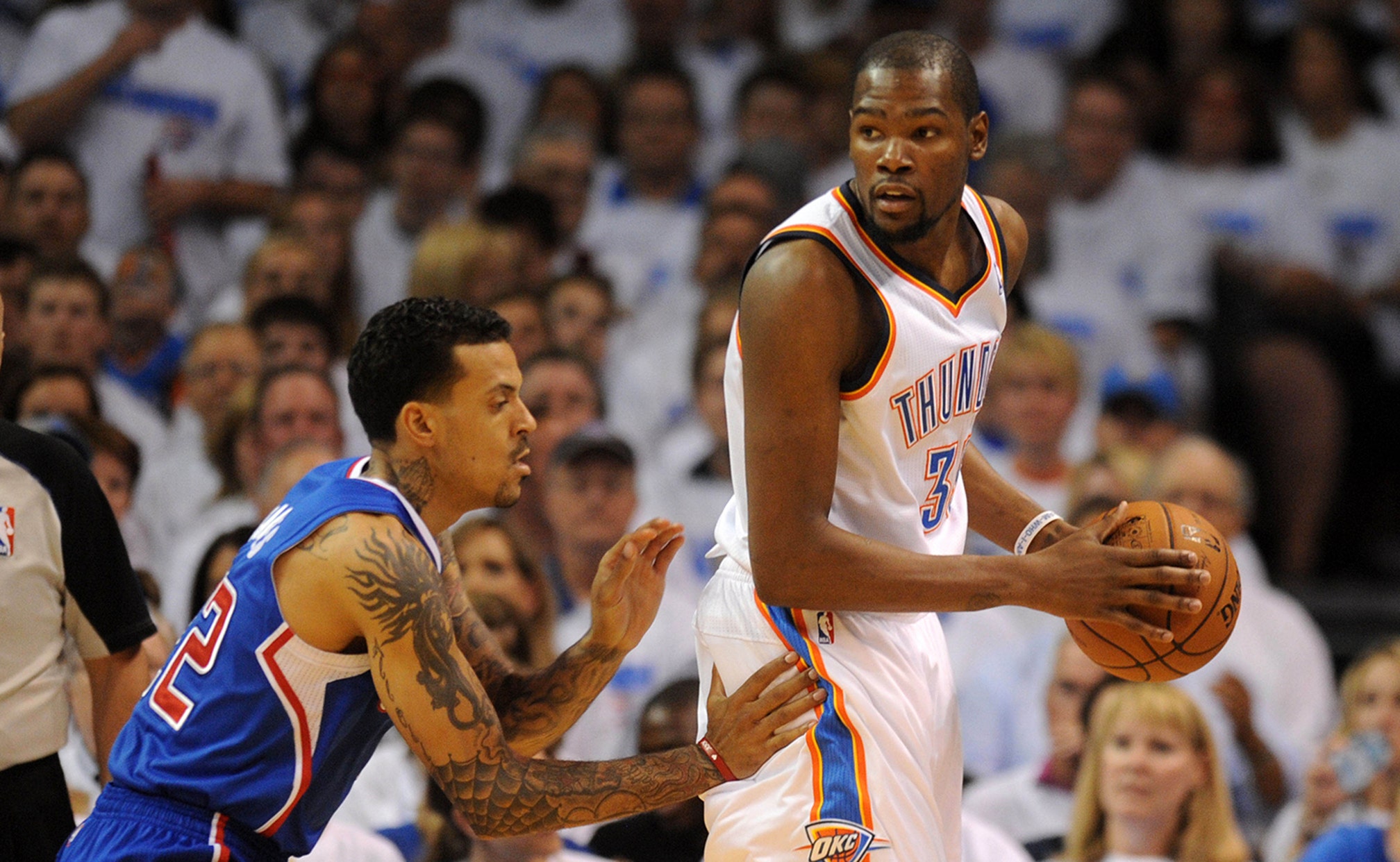 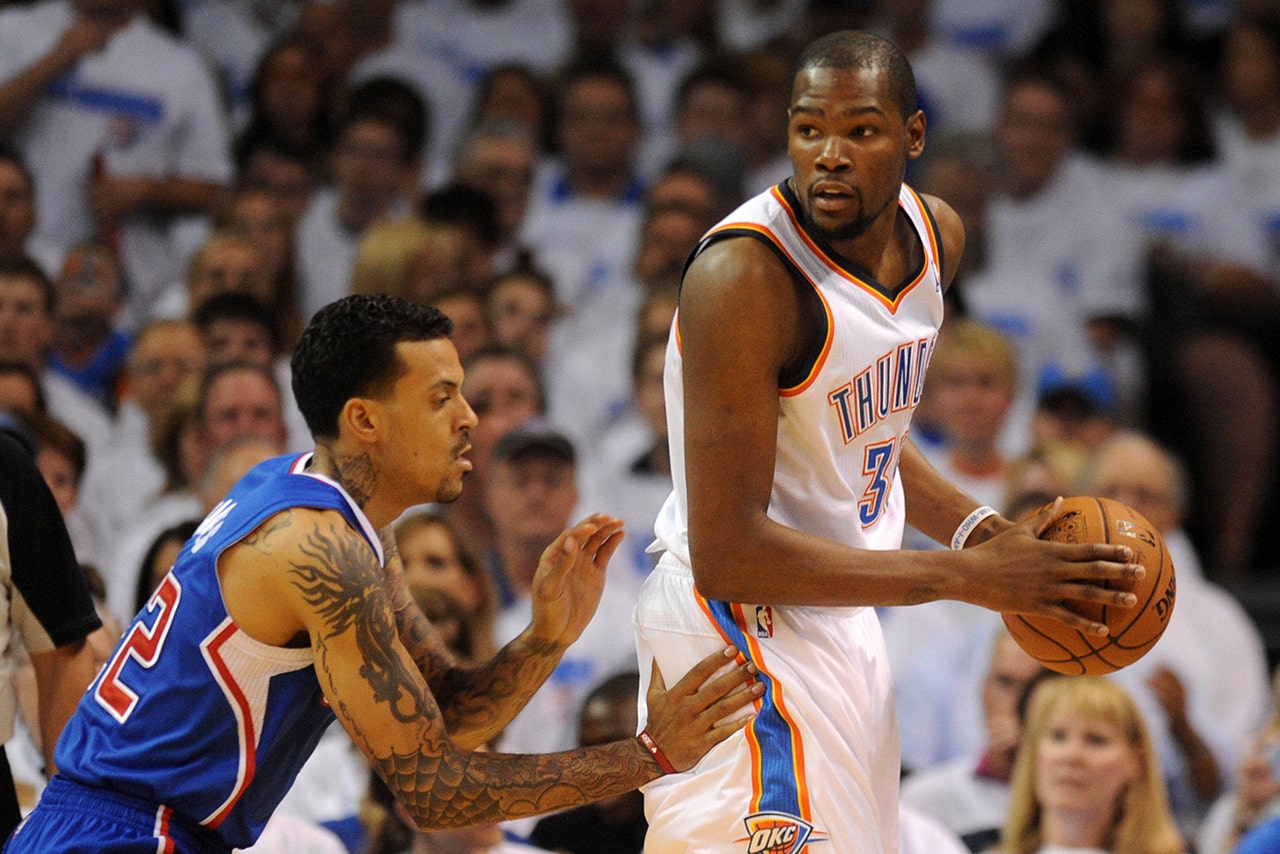 OKLAHOMA CITY - When Russell Westbrook and Kevin Durant show up and show out the Thunder are the best team in the NBA.

When Russell Westbrook and Kevin Durant each chase down triple-doubles, the Thunder aren't going to lose.

But when Russell Westbrook and Kevin Durant get help, any kind of real help from anyone else on the team, starters, bench players, role players, whoever, the Thunder win playoff games.

That's the formula. Simple as that. Some nights even less than that works just fine, but the Thunder certainly don't need more.

Wednesday, a game after the help went missing – as it often does in Oklahoma City – the Thunder got equal parts Kevin and Russ and a better-than-good contribution from Thabo Sefolosha, Serge Ibaka and Kendrick Perkins, took the lead early and won easily, 112-101. Now the series is tied at a game apiece.

See, here's the thing with the Thunder: Since Westbrook and Durant have teamed up, the Thunder have been good enough to win a championship, but since James Harden left right before the season started a year ago, Oklahoma City has been on the hunt for someone, anyone, to be that consistent threat.

When it happens, the Thunder win.

When it doesn't, it's touch and go.

"We can win if they both have good offensive games," Clippers coach Doc Rivers said of Westbrook and Durant. "What we can't do is give them that, plus everything else."

Everything else came from the most unexpected of places on Wednesday. Perkins had eight points and nine rebounds and Sefolosha, who came in averaging just 3.7 points per game in the postseason and didn't even get a minute of playing time in games 6 and 7 against Memphis, had a season-high 14  points on six-of-nine shooting. Ibaka had 14 points on 6-of-10 shooting.

"We've beaten them before when they both have great games," Rivers said of Durant and Westbrook. "Today we were not locked in, I thought it was because of the clutter. We were upset at the officials. We were upset at everything. Tonight we didn't have it, but give them credit."

Credit goes to Durant and credit goes to Westbrook  – win or lose - in November or in the playoffs. Credit because the two have earned it, but blame often goes to the bench and beyond. If Westbrook and Durant come up short, the opposing team game planned correctly, but if no one else contributes, the pressure on OKC's twosome builds. If only Durant or only Westbrook plays well, it's even harder for the Thunder to overcome.

See, that's what the Thunder have done since they turned a franchise from floundering to flourishing. They haven't done it with ball movement or crazy, stifling defense. They've done it by Durant scoring prolific amounts, earning the love of a city and then the MVP. They've done it with the raw energy of an un-guardable Westbrook, his attitude and emotion.

They are triple threats," Brooks said of Durant and Westbrook. "That's what makes us a good team. When our other guys are ready to make shots, it's a pretty good advantage. They play well together and they've been doing it for a lot of years."

It happened against Wednesday.

No one in the NBA, except for Westbrook, who has done it now three times, has a triple-double this postseason. And no one, except for maybe Justin Timberlake,  gets more attention than Durant.

The two combined for 63 points, and if Durant had managed another another assist, both would have had triple-doubles. Durant had 32 points and 12 rebounds and Westbrook had 31 points, 10 rebounds and 10 assists. Beyond that, the Thunder did just fine, too.

"We can't let the other guys get going," Paul said.

Because when the other guys get going, Durant and Westbrook become close to unstoppable.

"Those guys did a great job with confidence," Westbrook said.

"They are focusing on me and Russell," Durant said. "We tell them (Sefolosha, bench players) to shoot the ball with confidence. The best thing we can do is keep passing them the ball. He (Sefolosha) was able to come out and be effective. We have to continue to trust him."

Sefolosha was two-of-three for five points in 16 minutes in Monday's Game 1 loss. Perkins had three points and three rebounds in 16 minutes. Caron Butler was one-for-seven. Reggie Jackson was one-for-eight and while Durant and Westbrook combined for 54 points, it was the perfect example of the two not being able to do quite enough in the face of the rest of the team doing nothing at all.

It's not mandatory Westbrook and Durant get help. They may not have even needed it Wednesday because the two were so good.

But they got it, and the Thunder were better because of it.