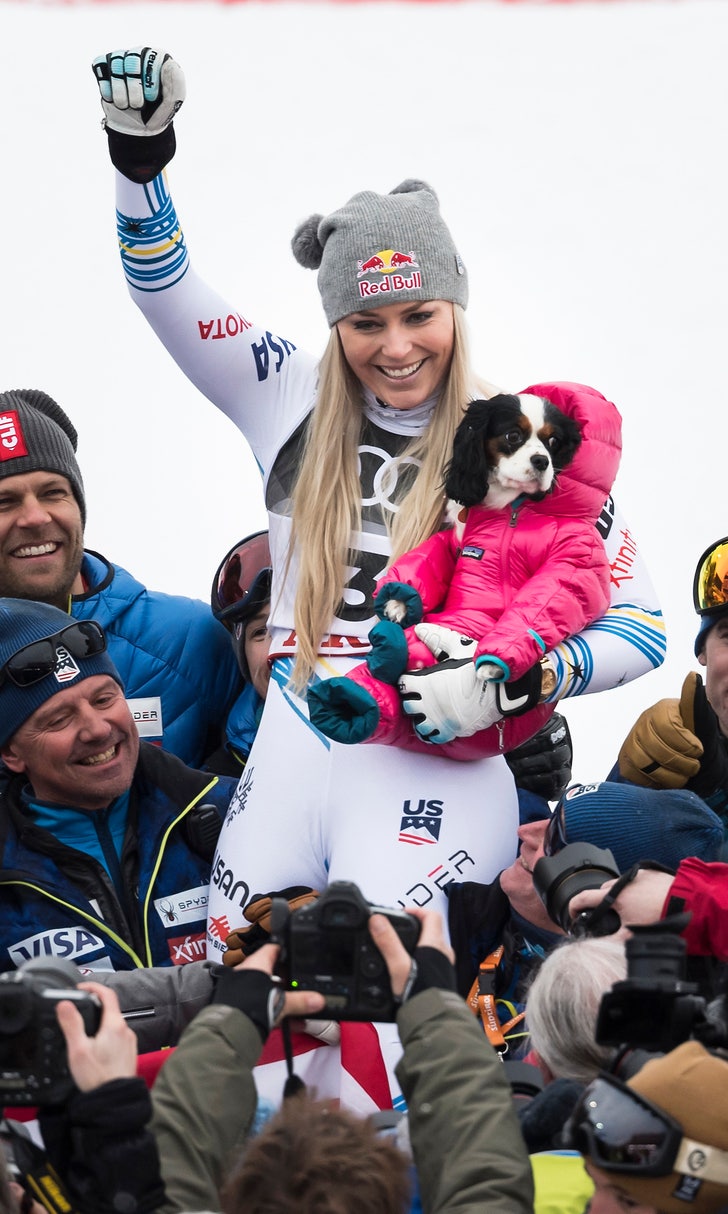 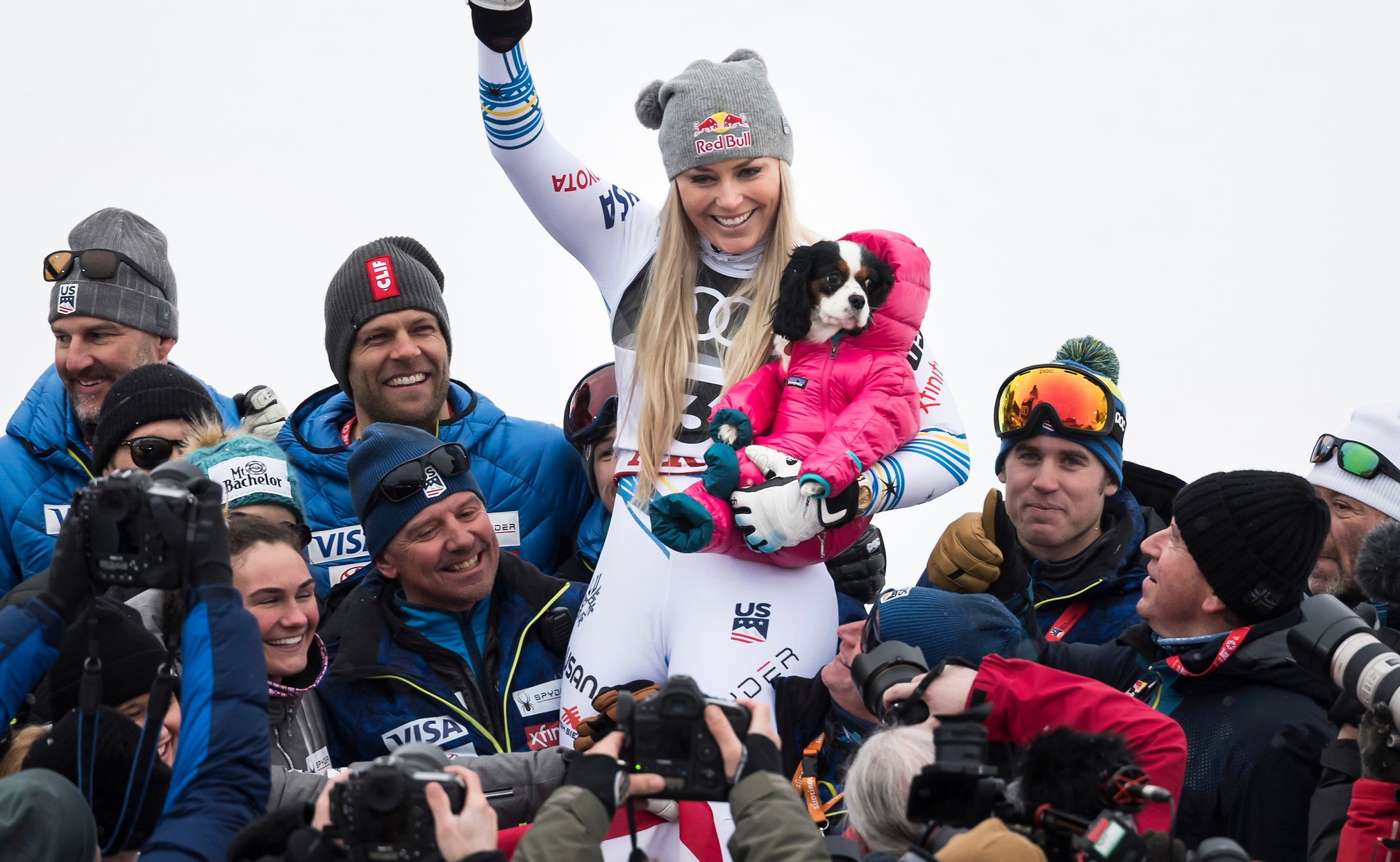 The temperature: absolutely freezing. The time: barely after sunrise.

The place: the bottom of a training hill in Vail, Colorado, waiting for Lindsey Vonn to finish a few runs to test her surgically repaired knee just before the 2014 Sochi Games — an Olympics she ended up missing because of that troublesome knee.

"Why on Earth would you wait in this?!" an incredulous Vonn asked me as she threw on her parka.

That one needed no answer.

If you've waited in the bitter cold, pressed against the fencing waiting for an interview, or, as a fan, planned your entire day around seeing Vonn — even if for just that magical split second when she sped by you on the mountain — then you were not alone. You were lucky. Freezing, perhaps. But lucky.

In an unscientific survey of fans, friends, family members and rivals to uncover the perfect word that best captured her , each person answered with a variation of three — a podium of sorts to describe the most winningest female World Cup skier ever.

Maybe that's why she kept going even after every outward and inward sign told her to stop.

At 34 and with her knees simply refusing to cooperate anymore, the 2010 downhill Olympic champion and the four-time overall World Cup title winner pushed out of the start gate for a final time at the world championships Sunday in Sweden. It was vintage Vonn as she roared through the downhill course to earn one last podium spot — a bronze medal that felt like pure gold. Before exiting the stage, she waved to the crowd and took one final bow.

A well-deserved moment over a career filled with crashes and comebacks, celebrations and triumphs, broken bones and broken hearts, red carpets and golden opportunities.

"The compelling nature of Lindsey's story is not her victories or medals. It is her daring, her willingness to work extraordinarily hard, and her grit," said her father, Alan Kildow, who moved the family from Minnesota to Colorado to help nurture his daughter's talent when she was young. "Without failure there can be no true victory, and Lindsey represents the willingness to risk failure to ultimately achieve her dreams."

The image was jarring: Vonn whisked away from the mountain by a helicopter after a violent crash.

The first copter ride was after a downhill training crash before the 2006 Turin Games. Two days later, and with a bruised hip, she finished eighth in the downhill. The other, February 2013 at the world championships in Austria when she tore her ACL and MCL. It took her months to get back — she re-injured the knee and it cost her the shot at defending her downhill title at the Sochi Games — but return she did.

Comebacks and toughness have always been her thing. Her dad compared her to Rocky Balboa because she's the "everyman who climbs into the ring, takes a beating, and gets back up off the canvas to win the bout."

That ability to bounce back served her well over a career that included torn knee ligaments, broken bones, a sliced thumb and so much more.

Her first World Cup start was Nov. 18, 2000, in a slalom race in Park City, Utah, and she didn't qualify for the second run. She was known as Lindsey Kildow then, until she changed her name to Vonn after marrying her now ex-husband, Thomas, in 2007. They announced their divorce in 2011 and she never changed her name back because, well, the world knew her as Vonn. During her marriage, she was estranged from her father, but they have mended the relationship.

She'd win 82 World Cup races — four behind the all-time mark held by Sweden's Ingemar Stenmark, who showed up Sunday at her request — and drew comparisons to compatriot Bode Miller, who was revered for his high-risk approach.

"What she's done for the sport, inspiring so many youth, girls and boys, and showing you can compete with the big superstars in Europe, we're all proud," American racer Daron Rahlves said.

As the U.S. ski team doctor for more than 20 years, Dr. William Sterett can't help but marvel at her resiliency.

"I don't know anybody in any other sport that's had to bounce back as many times as she has," Sterett said. "She's come back just as tough and just as driven as she ever was."

Word of caution — don't tell Vonn she can't do something. It fires her up.

"Once something is in her mind she's going to do it," said her sister, Laura Kildow.

Vonn's sister has been by her side through many of her surgeries. She's seen the determination to get back on the slopes.

"I have this image of her a few days after having surgery where she's sitting on the floor in front of the TV trying to raise her foot off the ground," Laura Kildow recalled. "She was so concentrated, her leg was shaking. But she just physically couldn't do it. But the look in her eyes was like you knew she wasn't going to stop trying until she did it."

That's why stepping away was so difficult. She planned to go until December and couldn't wrap her mind around leaving early.

Her body finally convinced her. Two last races at the world championships and no more. In the super-G, she crashed and suffered more bruises. But she returned even more determined Sunday in a downhill where she momentarily had the lead.

"I put the nerves aside and just enjoyed it," she said.

A bigger bonus: "I made it down safely," she cracked.

Vonn was among the first women to regularly use men's downhill skis, which were longer and tougher to control but generated more power. Given her renowned workout routines — upside-down sit-ups anyone? — she didn't have a problem. She also wanted to race against the men , something that never came to fruition.

She opened eyes to what's possible, especially to a youngster named Mikaela Shiffrin , who has 56 World Cups wins and turns 24 in March.

"I wrote book reports about her," Shiffrin said. "I was Lindsey's biggest fan."

Vonn's success wasn't limited to the slopes. The spotlight always found her, a crossover athlete who appeared on magazine covers, dated famous sports stars — once golfer Tiger Woods and now Nashville Predators defenseman P.K. Subban — and wore elegant outfits at gala events. She also has set up a foundation to help future generations find their "grit within."

All part of her plan to raise the profile of ski racing — much like Serena Williams did for tennis .

"I try to be dynamic and powerful and really creating speed where most people can't," Vonn said before the Pyeongchang Games last February, when she earned a bronze in the downhill. "In that way I hope to leave a powerful impact on the sport and hopefully raise the level of women's skiing."