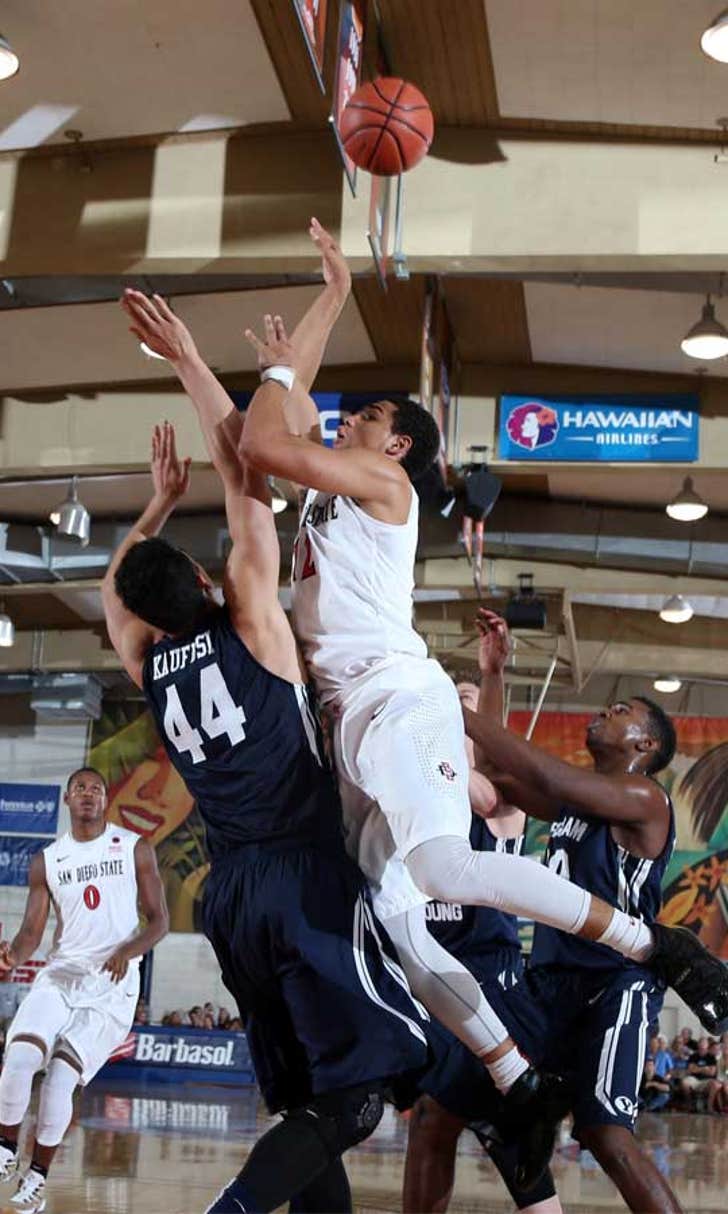 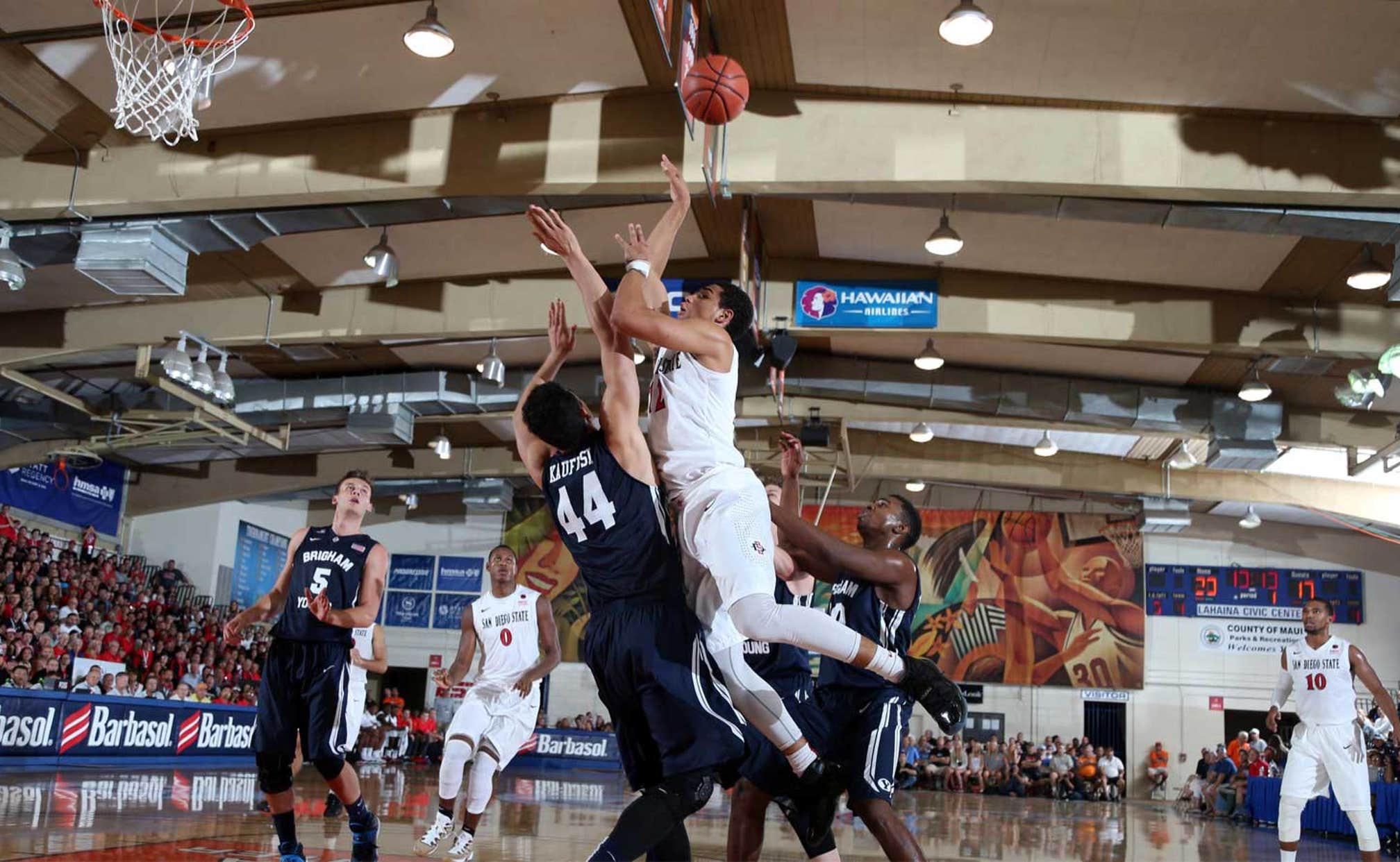 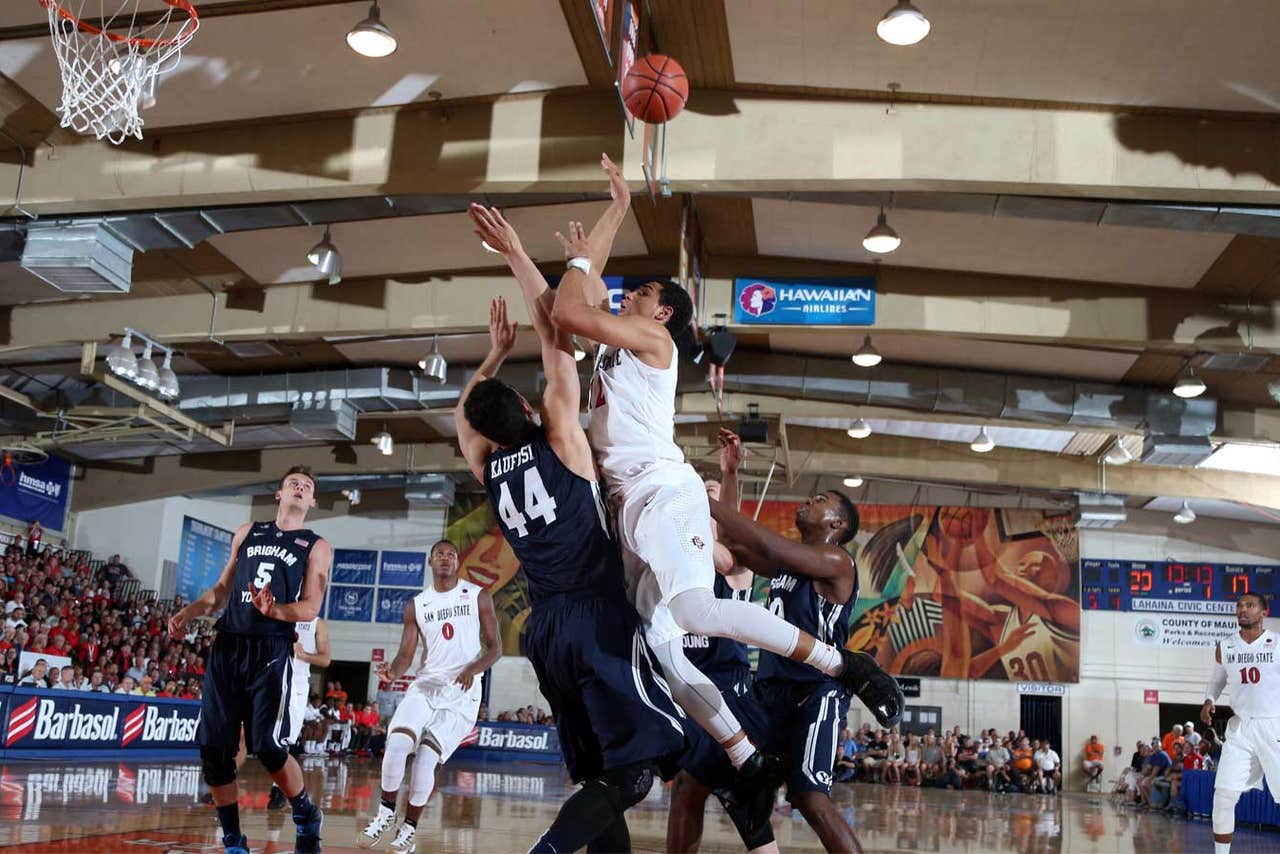 LAHAINA, Hawaii (AP) -- San Diego State senior Aqeel Quinn launched a potential tying 3-pointer, only to have the shot come back at him.

Instead of panicking, he grabbed the blocked shot, calmly gathered himself and dropped in the 3-pointer he intended to make the first time.

Quinn scored 22 points and hit a big 3-pointer in each overtime, helping No. 15 San Diego State outlast BYU 92-87 in the first round of the Maui Invitational on Monday night.

"I just looked down to see if I was behind the 3 and let it fly," Quinn said.

So did both teams in a wild second half and pair of overtimes.

BYU (3-1) trailed nearly the entire way before rallying behind Tyler Haws. The senior guard scored 20 of his 26 points after halftime, including a pull-up jumper to put the Cougars up 76-71 in the first overtime.

The Aztecs fought back and tied the game on a 3-pointer in the closing seconds by Quinn, who had his first attempt swatted by Corbin Kaufusi.

That sent the game to a second overtime, where Quinn hit another 3-pointer in the second overtime and scored on a hard drive to put San Diego State (4-0) up 85-82.

Winston Shepard added 18 points for the Aztecs, who pulled out yet another close game against their former Mountain West Conference rivals.

"This is the kind of game we've had for a lot of years with BYU," San Diego State coach Steve Fisher said.

BYU gave the Aztecs everything they could handle.

The Cougars made 13 of 30 from 3-point range and trailed until Haws tied the game at 67-all on a 3-poitner with 90 seconds left.

BYU took the five-point lead in overtime, but couldn't keep up with the Aztecs in the second overtime. Kyle Collinsworth had 21 for the Cougars.

"We had a hard time getting the lead and protecting the lead once we got it late," BYU coach Dave Rose said. "We'll have to bounce back from a disappointing loss."

The Aztecs have been dominating defensively this season and were at their swarming best the last time out, holding Cal State Bakersfield to 27 points, the lowest in school history in the 45 years the Aztecs have been in Division I

The downside for the San Diego State has been its offense. The Aztecs scored no more than 53 points their past two games and shot an ugly 25 percent in the win over Bakersfield.

Coach Steve Fisher said his team was getting good shots, it was just a matter for some of them starting to fall.

The Aztecs certainly got shots to fall early against BYU, scoring the game's first 11 points and hitting 16 of 33 in the first half.

BYU kept up from behind the arc, hitting 6 of 9 from 3-point range.

The Cougars fought their way back behind Haws, who had six points on 2-of-8 shooting in the first half.

Haws pulled BYU within 59-57 with just over eight minutes left on a 3-pointer, setting up a tense back-and-forth finish that left the Cougars just short.

"This one just hurts, Haws said. "We had our chances in the second half and could pull it off."

San Diego State: The Aztecs were 19 of 31 on free throws, but hit big ones down the stretch.

San Diego State moves on to Tuesday's semifinals against Pittsburgh.

Fisher hit a couple of milestones with the victory. The win was his 500th overall as a coach and his 316th at San Diego State, tying George Ziegenfuss' school record.