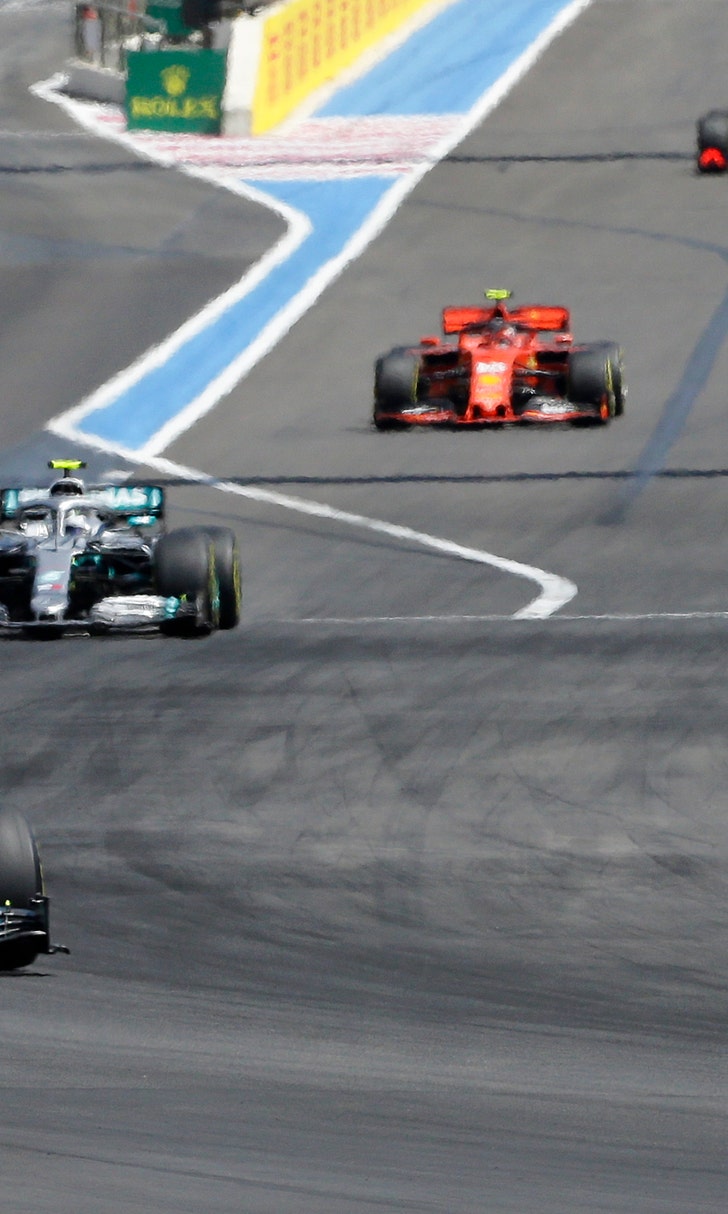 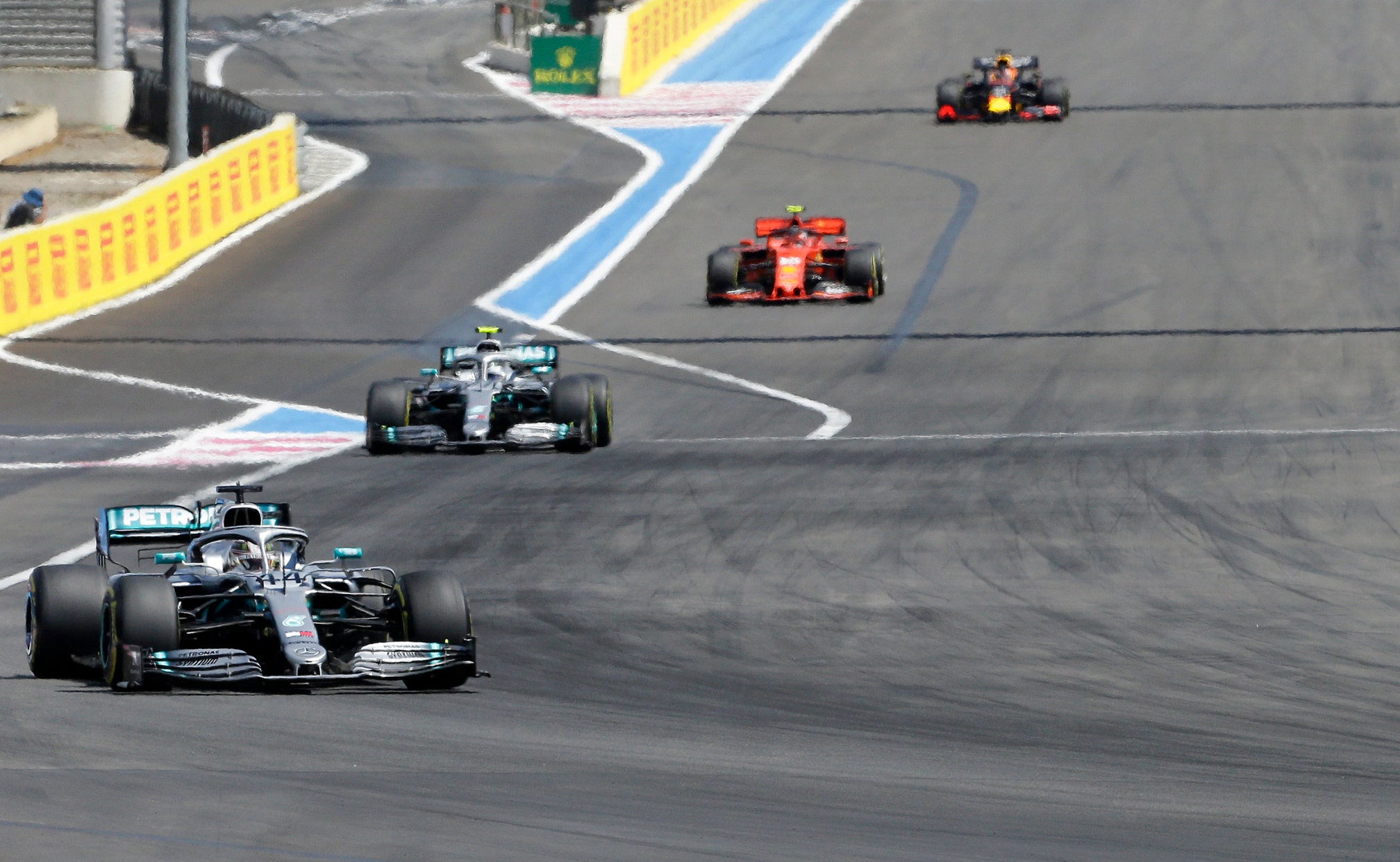 Once he accelerated away from pole position, leaving Mercedes teammate Valtteri Bottas trailing, Hamilton was not challenged over 53 laps.

It moved Hamilton 36 points ahead of Bottas and a massive 76 points clear of Ferrari's Sebastian Vettel in a quest for a sixth title which is looking increasingly likely for the British driver. It remains a highly unlikely feat but, if Hamilton wins the remaining 13 races this season, he will break Michael Schumacher's record of 91 F1 wins.

Yet despite his imperious dominance, Hamilton has sympathy for F1 fans who want more exciting racing, and long for the overtaking duels of old which gave races an unpredictable edge.

"If you say it's boring, I totally understand it," Hamilton said after his win. "Don't blame the drivers. We don't write the rules. Put the pressure on the people at the top, who should be doing their jobs. They have made mistakes for many, many years."

Hamilton's Mercedes team is favorite for a sixth straight drivers' and constructors' double. From 2010-13, Red Bull did the same when Vettel won his four F1 titles.

But Hamilton's wider point is that — although Ferrari pushed Mercedes during 2017 and 2018 — the seasons are somewhat resembling each other in terms of one team's overwhelming dominance over the rest.

To remedy this he wants more drivers consulted in the decision-making process leading up to 2021, when new rules will be approved.

Those rules have yet to be defined by governing body FIA, amid the diverging interests of teams.

Drivers should have a greater influence in such matters, Hamilton says.

"We are trying to get in the door ... for many years they have not wanted us in the room," Hamilton said. "They have to make serious changes to their idea of what 2021 should be."

Fans want more wheel-to-wheel racing and more overtaking, yet the inflexibility of zealously applied rules works against that.

Vettel thought he had won the Canadian GP two weeks ago, crossing the line first. But he was hit with a five-second time penalty for swerving off and back onto the track when under pressure from Hamilton chasing him.

Ferrari's request for the penalty to be overruled was turned down flat on Friday.

Sunday's win was all rather comfortable for Hamilton, especially after he clinched a record-extending 86th pole on Saturday.

The bad news for Hamilton's fading challengers is that he feels he's just warming up.

"The car's improving the more I get into the season," he said.

Leclerc provided late excitement, at least, when he almost caught Bottas on the last lap.

"I saw an opportunity but unfortunately there weren't enough laps left," Leclerc said after his third career podium.

It was a consistent race weekend from the 21-year-old Leclerc, who was third in all three practice runs and qualifying.

By the end, Bottas was relieved Leclerc ran out of time.

"It became a bit close with Charles," the Finnish driver said. "Closer than we wanted."

Red Bull's Max Verstappen placed fourth ahead of Vettel, who took a point for the fastest lap in what was otherwise another disappointing performance from the four-time world champion.

Vettel, who started seventh after a poor qualifying stint, has not won for 16 races dating back to the Belgian GP last August.

When Hamilton won here at the same stage last year, he regained the championship lead from Vettel.

Now he leads third-placed Vettel by 187 points to 111 — in what looks like becoming yet another disappointing season from the German driver, who lost the last two titles to Hamilton due to mistakes under pressure.

Hamilton appears much better than Vettel at keeping his cool.

But aside from the heat, there was little for Hamilton to sweat about.

Scottish Premier League
share story
those were the latest stories
Want to see more?
View All Stories
Fox Sports™ and © 2020 Fox Media LLC and Fox Sports Interactive Media, LLC. All rights reserved. Use of this website (including any and all parts and components) constitutes your acceptance of these Terms of Use and Updated Privacy Policy. Advertising Choices. Do Not Sell my Personal Info