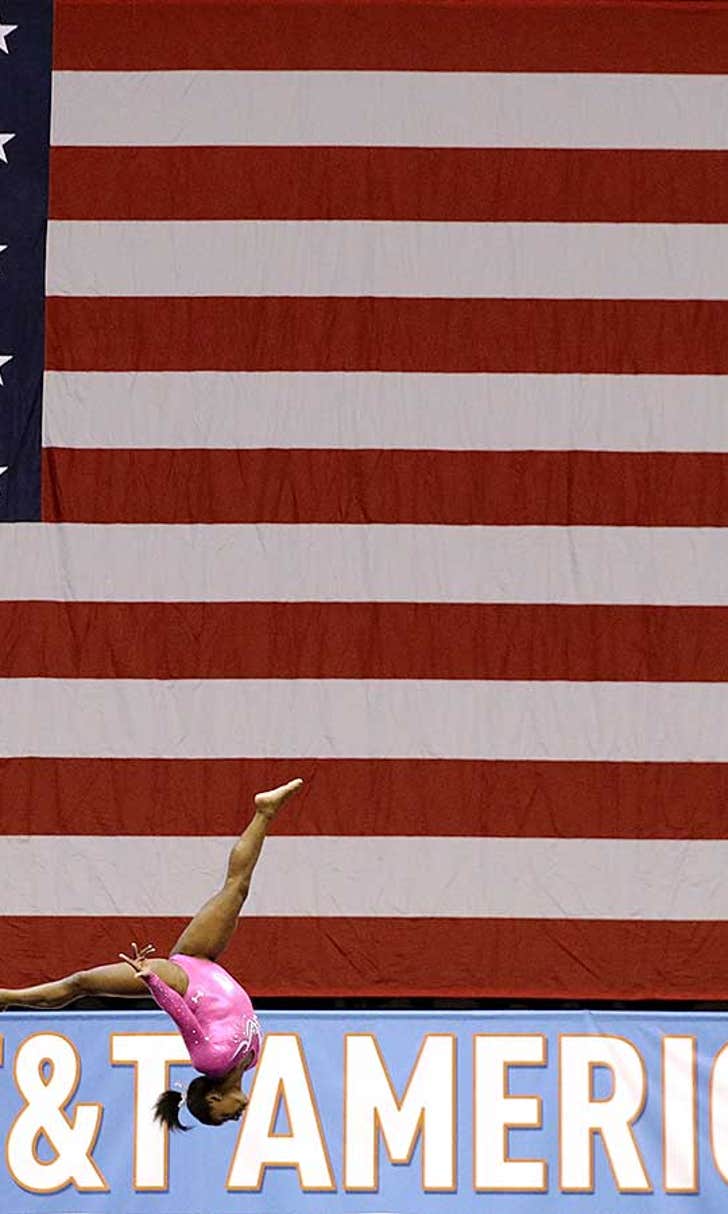 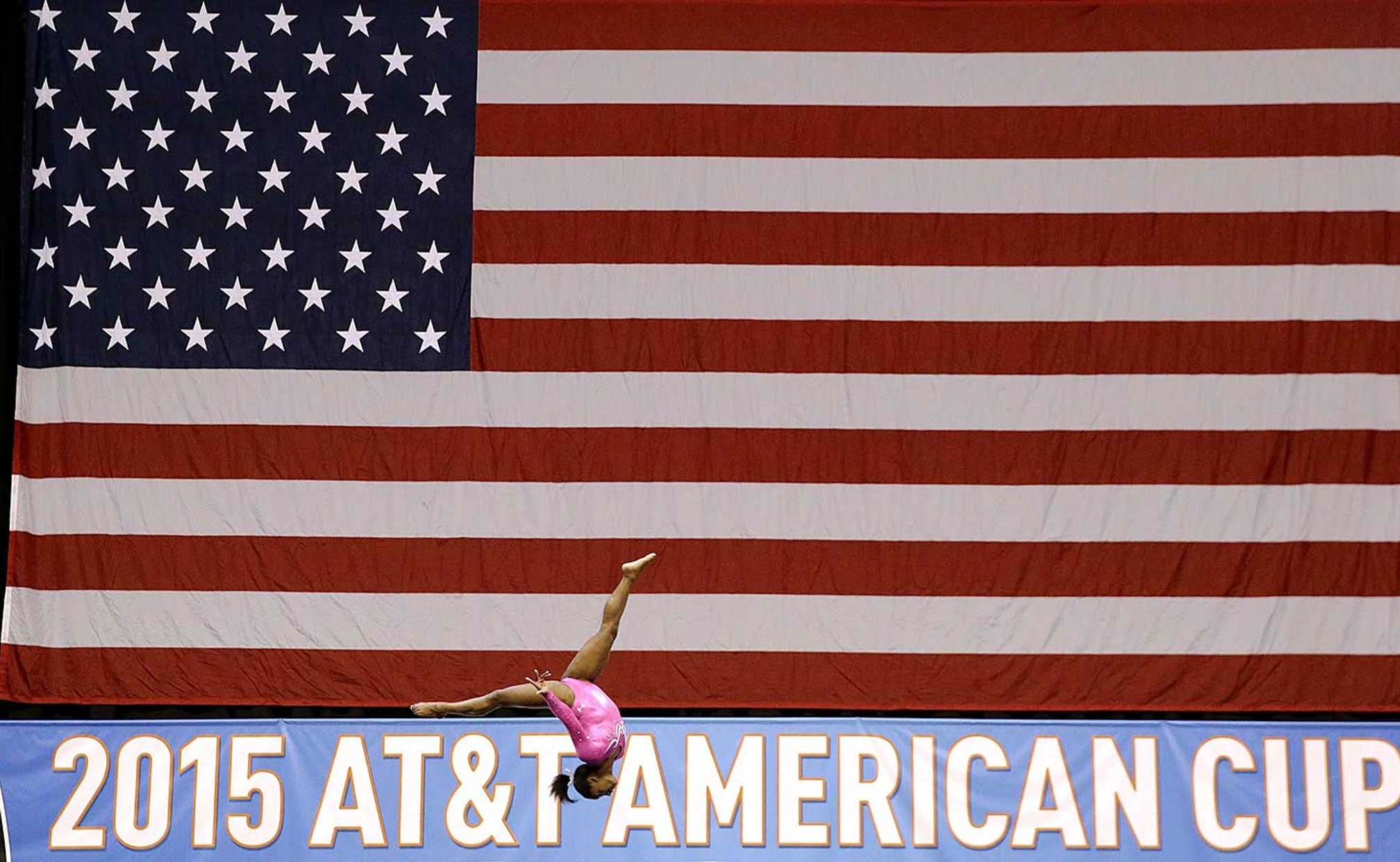 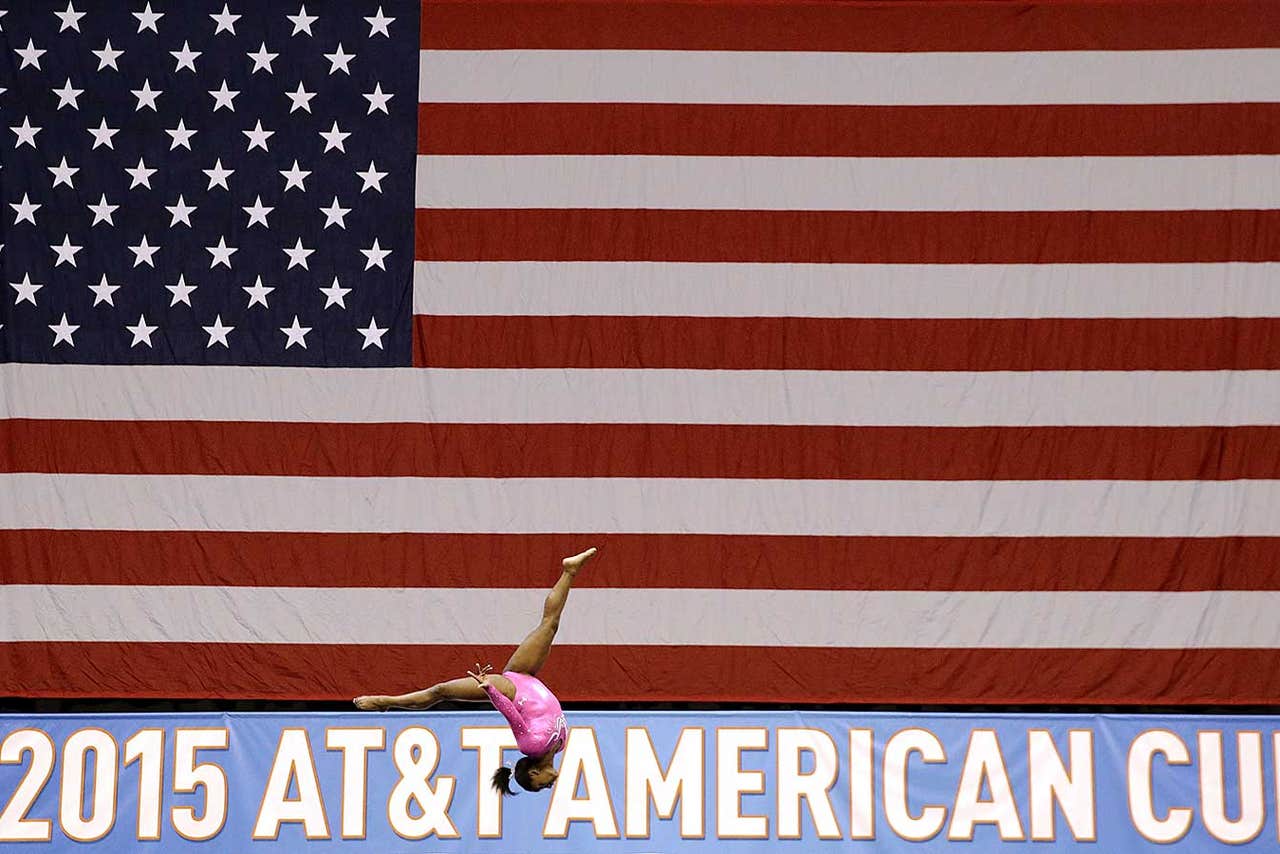 ARLINGTON, Texas -- Simone Biles nailed her first landing and flashed a wide grin to what amounted to a hometown crowd in her return to competition.

The two-time defending world all-around champion was on her way to a record-setting win in the American Cup on Saturday, flourishing in a rare chance to compete in front of some home fans.

The 4-foot-8 dynamo was the star of the first gymnastics event in the huge $1.2 billion home of the Dallas Cowboys, about 230 miles from where she lives and trains in the Houston suburbs.

"It's just really exciting because they haven't gotten to see me compete," said Biles, later pointing to a spot in the stands where she said her best friend was joyfully screaming back at her. "Most of my meets are international, so it's really hard. So for this one to be so close, it was a good opportunity."

Two-time U.S. men's champion Sam Mikulak fell in each of the first two events, the floor exercise and pommel horse, and finished fourth. Oleg Verniaiev of Ukraine was the men's winner, and Mikulak's teammate Donnell Whittenburg was third.

The crowd of 10,383 on one sideline of the NFL stadium got a life-sized view of all the gymnasts on the giant video board hanging about 50 feet above the floor. Huge black curtains closed off the other side of the 80,000-seat venue.

"It was definitely cool," Whittenburg said. "I kind of saw, corner of my eye, like, myself on TV. And I was like, `All right, try not to look at it.' Just tried to just look forward and stay in my bubble."

Biles had a couple of hundred supporters from the area that includes her hometown of Spring, Texas, and they watched the widest margin of victory at the American Cup at 4.467 points under a scoring system that was adopted in 2006.

It was the 17-year-old's first event since darting off the first-place podium after she was spooked by a bee in her flower bouquet at last year's world championships in Nanning, China. She's set to go for a third straight world title in October in Glasgow, Scotland, but will first compete in the U.S. event in June in Greensboro, North Carolina.

There was little doubt Biles would join previous American Cup winners such as Olympic all-around gold medalists Mary Lou Retton, Carly Patterson and Nastia Liukin, who was the unofficial host of this event in the area where she trained and still lives.

Biles had the highest score on each event, including 16.033 on vault and 16.0 on her finishing floor routine, for 62.299 points to 57.832 for MyKayla Skinner of the United States. Biles beat the previous record margin by more than two points.

The only glitch was a slight bobble on beam, and she was reaching for her back after the routine. She said she "tweaked" her back but was fine soon afterward. Beam was her lowest score at 15.066.

"I had consistency and I think I showed consistency," Biles said. "My beam irritated me, but then it was still pretty good."

Whittenburg led the men's field for most of the day, but Verniaiev overtook him in the final event with a solid showing on high bar. Verniaiev scored 90.597, and Whittenburg slipped to third at 89.932 behind Japan's Ryohei Kato (90.098).

Verniaiev put himself in position for the win with the day's highest men's score at 15.9 on parallel bars. He's the defending world champion in that event.

"He's been hitting that set ever since world championships," Whittenburg said. "I didn't really care where I finished. I just wanted to hit all my sets the best that I can. I feel like I definitely did that."

After two early mistakes, Mikulak's goal became having fun. He showed it before each of his remaining routines by smiling and motioning to the crowd to make noise, and shouting encouragement to Whittenburg during the close finish on high bar.

"You could either sulk and be sad and upset or you can go out and have fun," said Mikulak, who bounced back with the top scores on vault and high bar. "What's the point of living the next four events with being miserable when I could go out and have fun and put on a show."

NOTES: Jordyn Wieber, the 2011 world all-around champion and a member of the "Fierce Five" U.S. team that won gold in London, announced her retirement Friday. Wieber, a native of DeWitt, Michigan, entered the 2012 games as one of the favorites but did not qualify for the all-around finals. Her coach later revealed she had been competing with a stress fracture in her leg. The 19-year-old is a sophomore at UCLA. ... Italy's Erika Fasana finished third on the women's side, and 29-year-old Venezuelan Jessica Lopez was fourth.