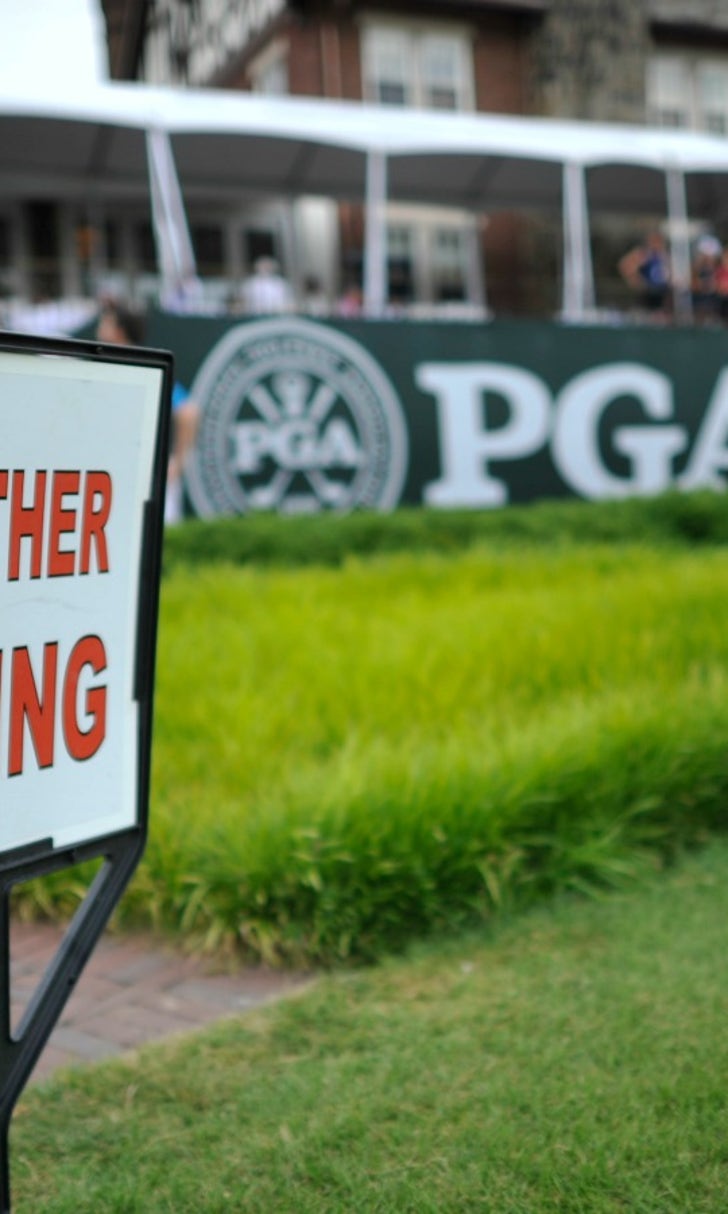 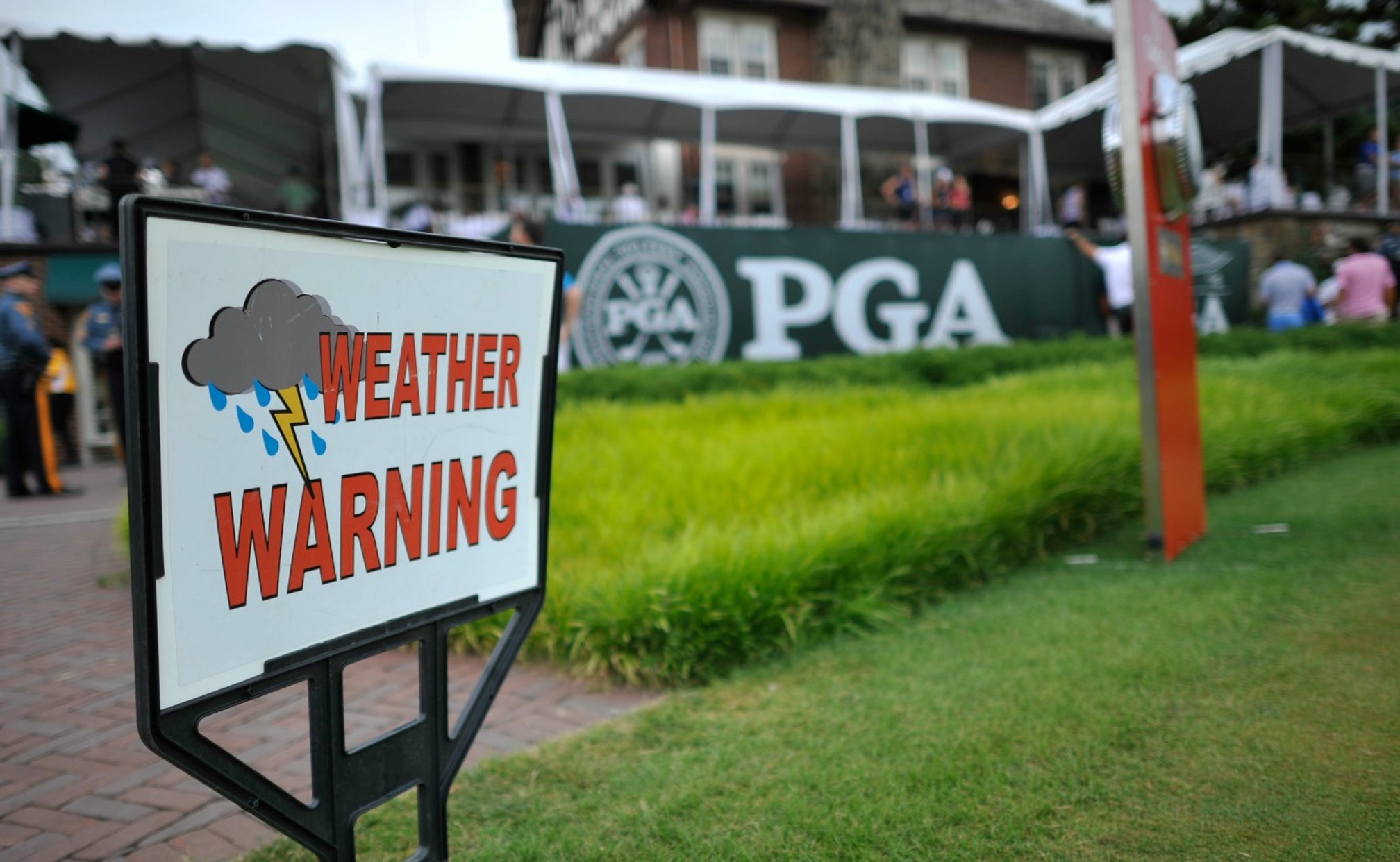 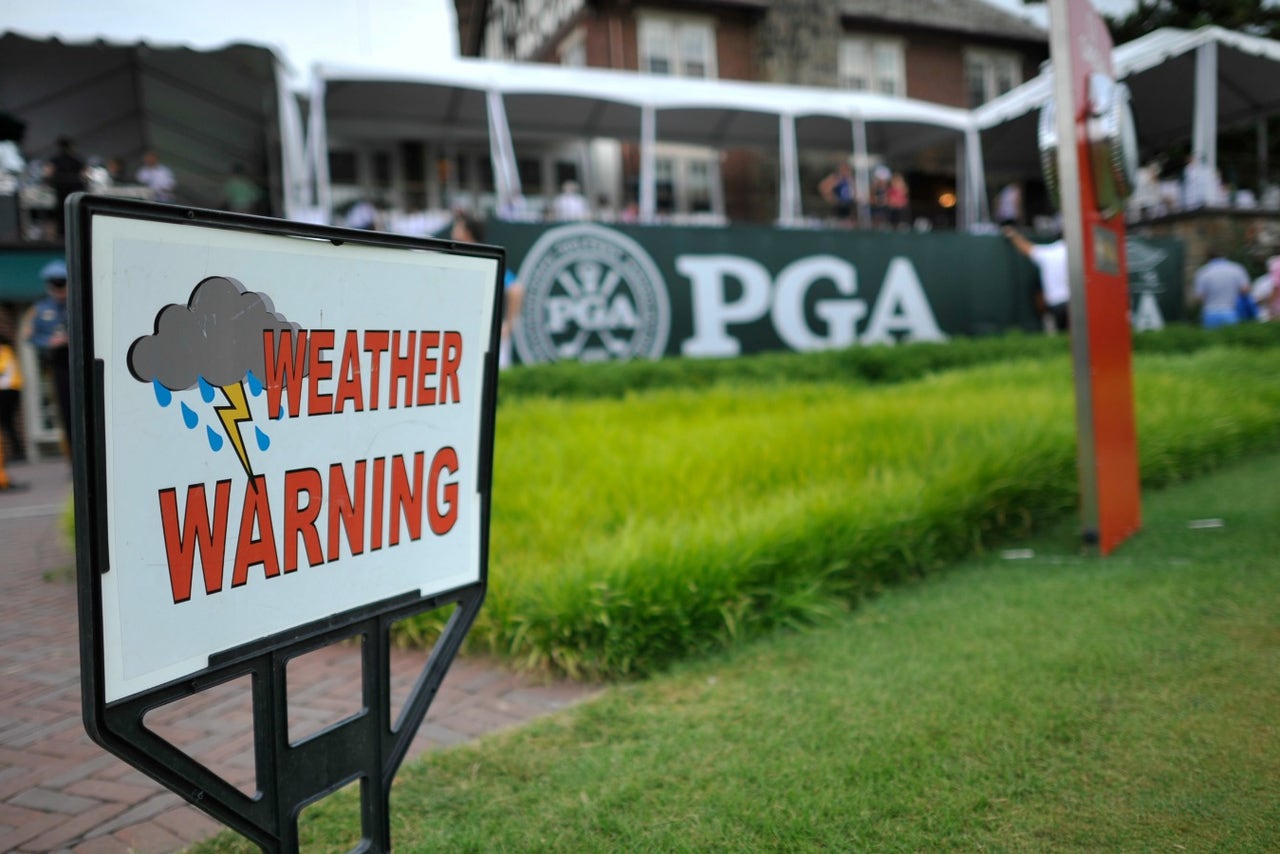 SPRINGFIELD, N.J. -- Thunderstorms shut down the PGA Championship on Saturday before 10 players could even hit a shot, setting up what could be a long, wet and wild conclusion to the final major of the year -- whenever it ends.

Jimmy Walker and Robert Streb made it as far as the practice range before clouds gathered, the sky rumbled and storms dumped more rain on an already saturated golf course at Baltusrol. Tied for the lead at 9-under par, they faced a 36-hole Sunday, provided the course could be ready by 7 a.m.

Otherwise, another Monday finish loomed, and that was only part of the unpredictable nature of this PGA Championship.

Kevin Kisner had seven birdies in his round of 5-under 65 and was at 5-under 205. He was one shot ahead of Padraig Harrington, who also had a 65. They were among only 37 players of the 86 who made the cut to complete the third round.

That's all, folks. Round 3 will resume at 7 a.m. Sunday morning. pic.twitter.com/uewO0UGpWT

The plan was for the third-round pairings to go right back out Sunday morning, meaning they would finish before the last group even began the fourth round.

"That will be an interesting dynamic, for sure," said Kerry Haigh, the PGA of America's managing director of championships. "Add to the excitement, actually."

It was the second time the PGA rolled the dice at Baltusrol and failed.

In the 2005 PGA Championship, they chose not to move up the tee times on Sunday with a high possibility of storms in the forecast, and Phil Mickelson had to return to play five holes to secure a one-shot victory. 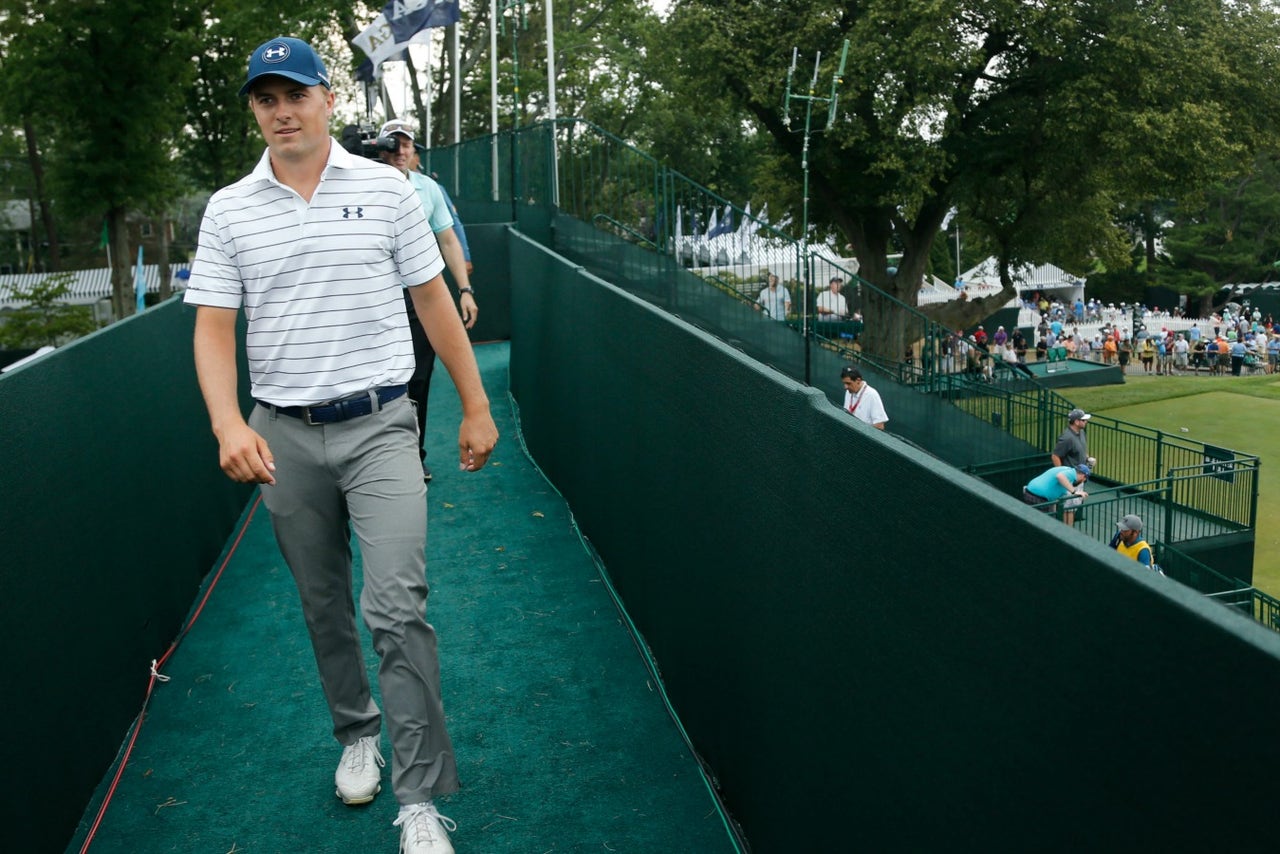 With storms in the forecast for Saturday afternoon, Haigh said the PGA did not "significantly" consider a two-tee start Saturday morning in threesomes.

"The forecast is similar to what it has been the previous two days, with a chance of rain in the afternoon, summer showers. And that's exactly what we got," Haigh said. "Unfortunately, today they hit us. And yesterday, they missed us."

It was the third time in five years that weather messed with the PGA Championship. The final round was played in threesomes off both tees at Kiawah Island in 2012, and Valhalla was a quagmire in 2014, though the last two rounds were played in twosomes and barely finished. Rory McIlroy won both of them.

The current condition of the putting green at @PGAChampionship. pic.twitter.com/W7PGOGgs5Q

Haigh could not think of the last time the players were not paired according to their 54-hole score for the final round.

Russell Knox lagged a 65-foot birdie attempt on the 18th hole, tapped in for a par and a 67 to reach 3-under 207, and then heard the horn as Marc Leishman was getting ready for his 12-foot birdie attempt. Leishman has to return at 7 a.m. for that putt, and then wait two hours to start his final round.

Knox couldn't resist a playful dig on Twitter in which he told Leishman that he had "grub, showered and feet up now." 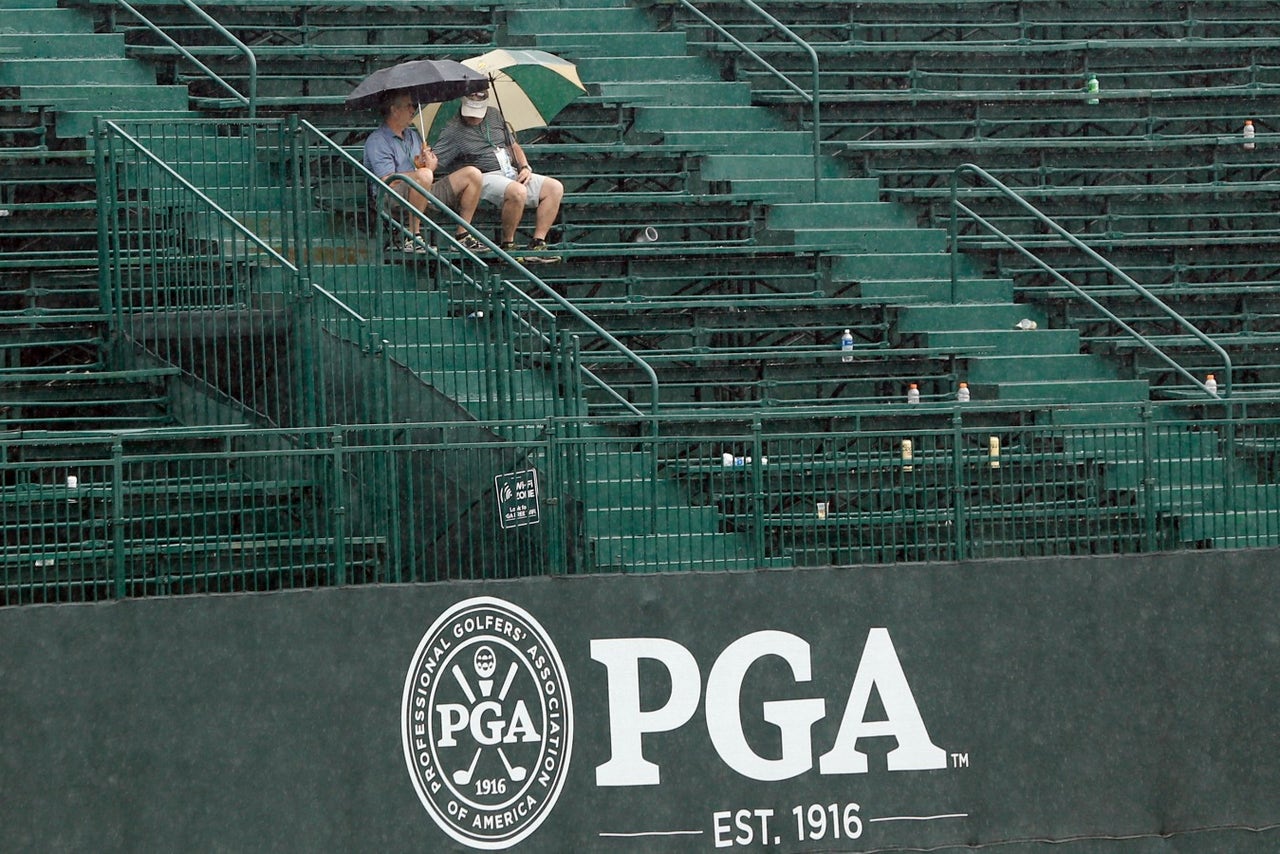 They could use plenty of rest, and a break in the weather.

Baltusrol already had about 3 inches of rain this week, and Haigh didn't have a report on Saturday's damage because it was still raining. There is no defense for soft greens, however, and it showed.

Streb posted the 30th round of 63 in a major on Friday. Kisner and Harrington took aim Saturday before the rain, each with 65s. Harrington didn't even think he played that well and still shot a 65, his lowest ever in a PGA Championship.

"Hit the right shots at the right time and any of the shots that I didn't hit well didn't do me any harm," Harrington said. "So it was one of those days. It's nice when you score better than you play. It was just an average day, as I said. Thursday was the day I played well. It was amazing, the best I played Thursday, is the worst score I shot. That's the nature of the game."

Kisner was slowed by a pair of bogeys on the front nine, though he bounced back with two straight birdies and finished with three birdies in his last four holes.

"You keep it in the fairway, you can attack," Kisner said. "The course is receptive enough. You can make a lot of birdies."

Mickelson made the cut with one shot to spare on Friday, rallying from an opening tee shot that went out-of-bounds and onto a side street. He shot a 68 on Saturday and was at 1-under 209, and he predicted far lower scores to come.

"There is a low 60s round," Mickelson said when he finished. "I think somebody is going to break that 63 record in these next two days. The greens are pristine. You can make a lot of putts. They are soft, so you can get the ball very close. I think that there's that 61 or 62 out there that I was probably trying to chase a little too hard."

Haigh was only hopeful for good weather, as soon as possible.

He said the course had so much water it was unplayable even if it stopped raining, and more rain overnight would make a 7 a.m. start unlikely. When it does get back into shape, the greens will be soft. Baltusrol's strength is measuring the right bounce on the greens because of the contours. This might be more like lawn darts.