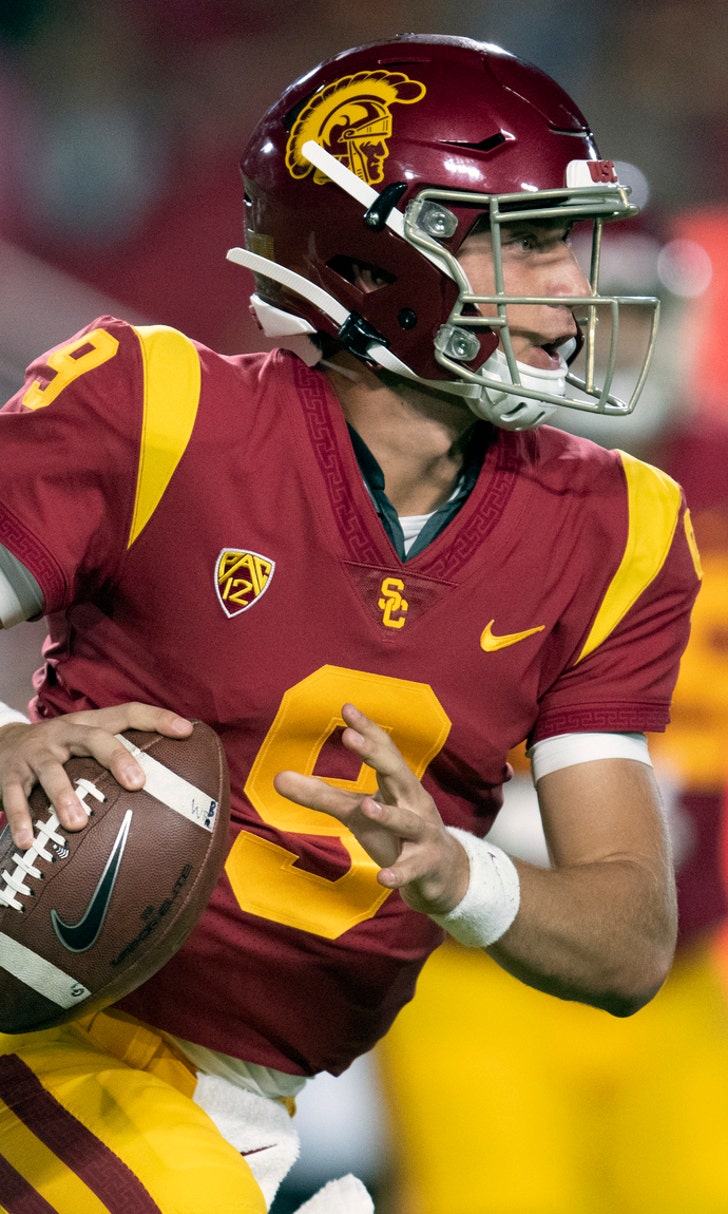 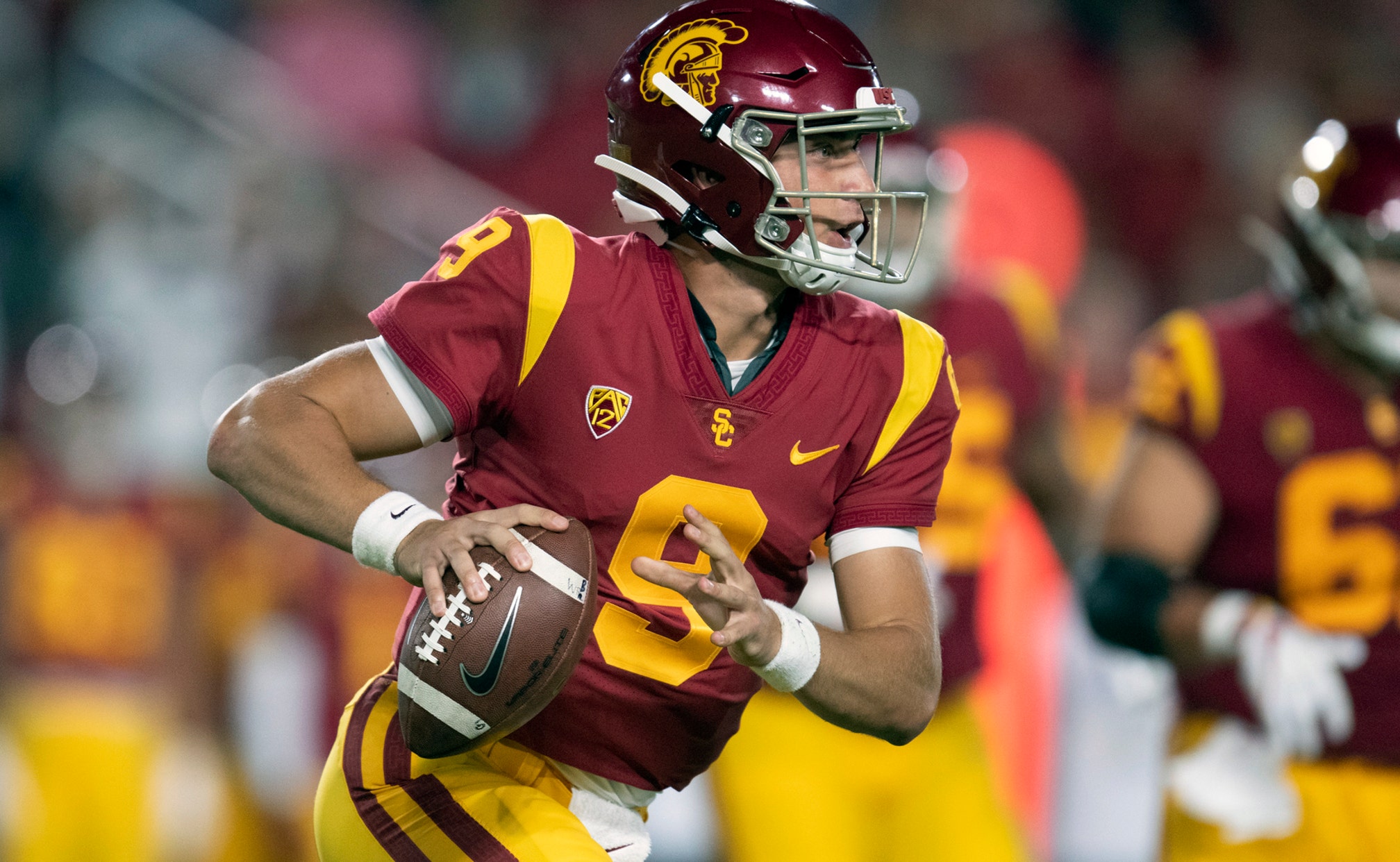 LOS ANGELES (AP) — Southern California and Stanford always face each other early in the regular season these days, usually before either team is playing its best football.

On this particular way-too-early Saturday night in September, the Trojans and the 23rd-ranked Cardinal will be led by quarterbacks who also might not be ready for the rivalry game.

USC's Kedon Slovis and Stanford's Davis Mills are expected to make their first career starts when the Trojans (1-0) host the Cardinal (1-0) in the first matchup of the Pac-12 season.

Slovis and Mills are in the Coliseum spotlight because of injuries to both starting quarterbacks in the schools' season openers. J.T. Daniels is out for the year after injuring his knee in USC's win over Fresno State, while K.J. Costello will miss at least this game after incurring a head injury against Northwestern. He was ruled out Thursday night.

"It's a dream you have as a little kid to play," Slovis said. "Having this week of preparation is really beneficial to me. I'm excited to go out there."

Ready or not, the two inexperienced passers will take charge when USC and Stanford open conference play against each other for the sixth consecutive year. The performance of the players around them could determine which first-time starter emerges with a win. The schools are determined to protect their young passers with strong game plans.

Both quarterbacks produced mixed results in relief during their openers. Slovis had an interception among a 6-for-8 performance, including just one major pass. Mills fumbled twice during his 7-for-10 performance to finish off Northwestern.

"He'll learn from his mistakes," Stanford coach David Shaw said. "He has to hang onto the ball. He did a good job of making decisions in the pocket. It's about taking it to the next level."

Here are more things to know about the 99th meeting between the California private schools in a rivalry that dates to 1905:

The Cardinal will be without vaunted left tackle Walker Little, who is out for several weeks with a leg injury. Freshman Walter Rouse is expected to replace him, and the Trojans hope to exploit the backup with a pass rush that shows early signs of promise. USC got three sacks against Fresno State, with Christian Rector and freshman phenom Drake Jackson generating consistent pressure. Rattling Mills could help the Trojans.

Stanford throttled Daniels and the USC offense in a 17-3 win on The Farm last season, holding the Trojans to their lowest-scoring performance in 21 years. The result foreshadowed a miserable offensive season for the Trojans, who eventually got rid of most of their offensive coaching staff and replaced it with a unit run by offensive coordinator Graham Harrell, whose Air Raid offense had good and rough stretches last week. Harrell claims he won't change his game plan or play-calling decisions with a new, inexperienced starting quarterback.

While Slovis is an 18-year-old freshman coached by Kurt Warner in high school at this time last year, Mills is a junior with two years of offensive study and brief playing experience last season. Slovis is new to the Trojans' offense, but so is everybody else after the wholesale changes made by Harrell. Stanford believes Mills' experience could give them an edge — if he can avoid more fumbles. "Davis is a talented player and makes big throws," running back Cameron Scarlett said. "I've seen him making plays, and he was getting into a groove. We need better ball security. Turnovers will lose us games."

Slovis and Mills largely handed off in the second half last week while USC and Stanford grinded out their victories. Both teams have ample talent in the running game, with USC tailbacks Vavae Malepeai and Stephen Carr both producing outstanding season debuts for the Trojans. Scarlett rushed for a career-high 97 yards for Stanford. The Air Raid isn't known for its hard-nosed running prowess, but coach Clay Helton has praised Harrell for adapting to defensive weaknesses. Stanford held Northwestern to 93 yards rushing. USC's run defense gave up 206 yards to Fresno State.

Both teams have a St. Brown receiver in their lineup from the famed Orange County family of former bodybuilder John Brown. USC's 19-year-old Amon-Ra St. Brown is beginning his promising sophomore season, while his 21-year-old Osiris is a junior at Stanford. Amon-Ra had 60 catches for 750 yards as a freshman. Osiris made eight catches last year for the Cardinal after sitting out 2017. Their older brother, 22-year-old Notre Dame product Equanimeous St. Brown, went on injured reserve in Green Bay last weekend, ending his second NFL season.