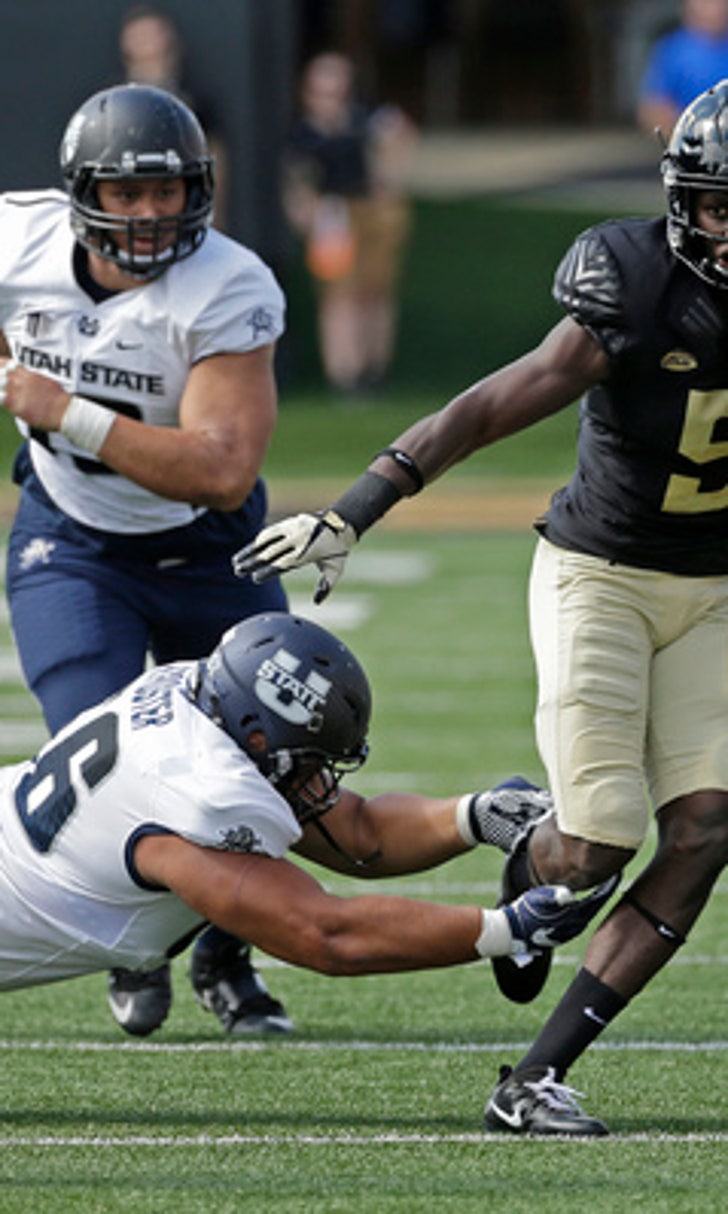 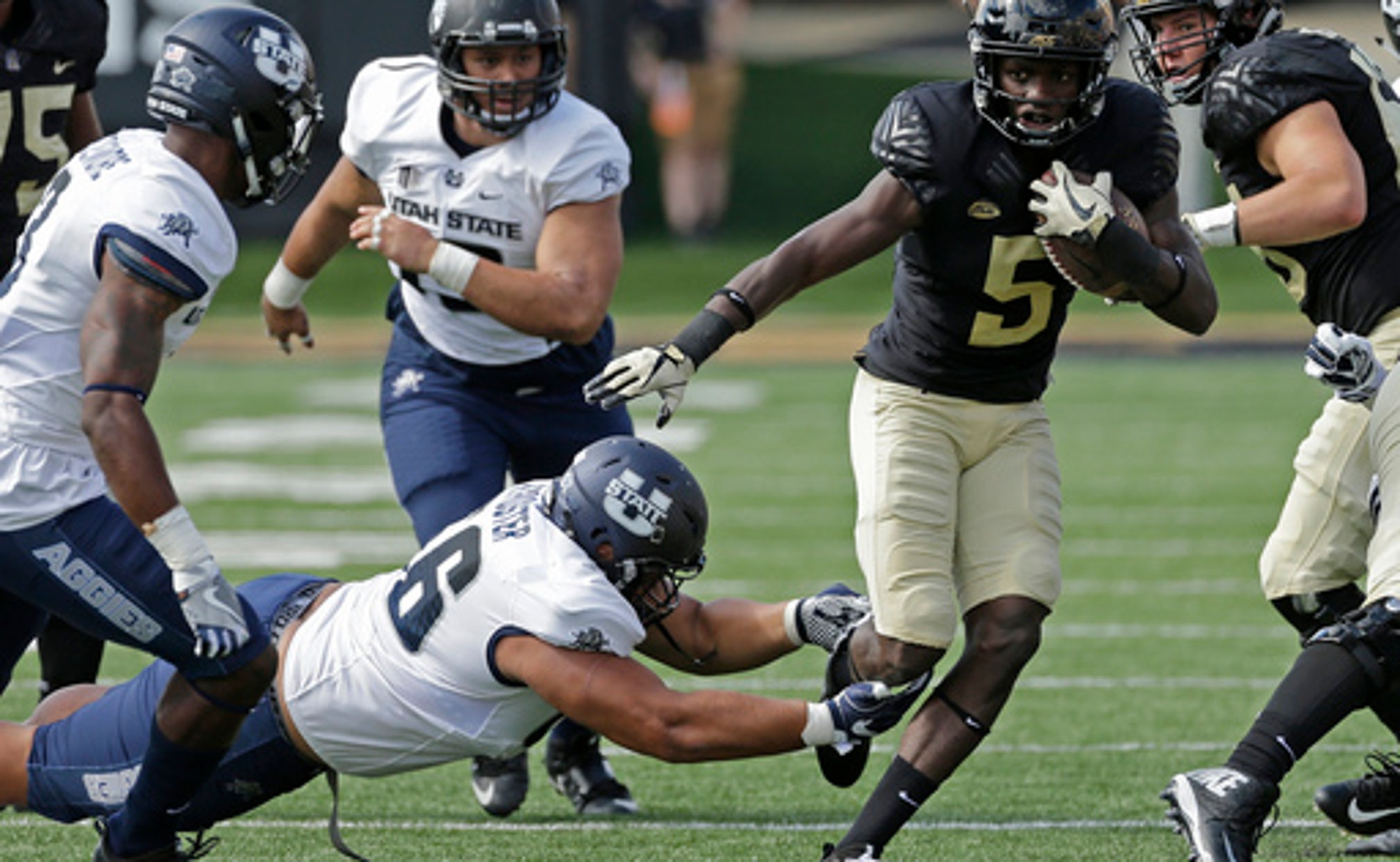 He felt dramatically different on Saturday.

The 6-foot-1, 200-pound senior threw for 242 yards and two touchdowns and ran for another score as the Demon Deacons dominated Utah State 46-10 to start 3-0 for the second straight season.

''They have surrounded me with some really good skill (players) now, but the big jump is the offensive line,'' Wolford said. ''Three years I got drilled a few times. I don't want to knock the O-line back then but I remember coming off the field hurting. ... This is the best I've felt after a game in a while.''

Utah State coach Matt Wells said Wake Forest is a much improved team since the Aggies beat them 36-24 in 2014 when the Deacons fielded an offensive line consisting mostly of underclassmen.

''The biggest improvement I've seen from these guys is in the trenches,'' Wells said. ''They got experience now. They're strong and they're big.''

Arkeem Byrd had 120 yards rushing including a 59-yard TD scamper and Tabari Hines had a career-high 129 yards receiving for the Demon Deacons. It's the first time in six years Wake Forest has had a 100-yard rusher and receiver in the same game.

Wake Forest led 30-0 at halftime after outgaining the Aggies 397-77 in the first half.

Demon Deacons coach Dave Clawson liked what he saw from this team all around.

''We're better since we went to Utah State a few years ago,'' Clawson said. ''Three years ago we were totally dominated on the line on both sides of the ball and they had more explosive plays than us. We've gotten better.''

Wake Forest seized the momentum early as Cameron Glenn intercepted a Kent Myers pass on Utah State's first possession and returned the ball 43 yards for an apparent touchdown. The play was called back for an illegal block, but it didn't matter as Wolford hit freshman Greg Dortch on a slant route on Wake Forest's first offensive play for a 43-yard touchdown. Wolford made it 14-0 on the next series finding a wide open tight end Cam Serigne on a seam route for a 45-yard TD and the rout was on.

They limited Utah State (1-2) to 1.98 yards per play in the first half and Boogie Basham recorded a safety.

KNOCKED OUT: Myers was 9 of 23 for 54 yards before being knocked out of the game in the third quarter when he was hit on the return of a pooch punt. Wells said he ''got dinged'' and is uncertain if he will miss any time moving forward. Jordan Love replaced Myers and threw a 75-yard touchdown pass on his second throw.

DORTCHED HIM: Dortch became the first freshman in school history to catch a touchdown pass in his first three games. It was Dortch's team-high fourth TD catch of the season and he leads the Demon Deacons in yards receiving.

NEW STREAK BEGINS: Serigne had his 37-game streak of consecutive receptions snapped last week at Boston College, but started another on Saturday when he showed his speed by exploding down the seam and hauling in a TD catch in the first quarter.

SUPER SPECIAL TEAMS: Wake Forest gave up a first down on a fake punt, but otherwise dominated on special teams. Punter Dom Maggio pinned Utah State at the 1-inch line leading to a safety on Utah State's next possession and Jessie Bates had a 75-yard punt return that led to a 1-yard run by Matt Colburn.

Utah State: The Aggies looked like a jetlagged football team that simply didn't show up one week after a 51-13 win over Idaho State. They were beat up front on both sides of the ball. The Aggies couldn't get anything going on offense and their defense did little to stop the Demon Deacons, who averaged 7.6 yards per play in the first half. Myers struggled at quarterback, but Love provided some spark.

Wake Forest: The Demon Deacons may be a little better than some are giving them credit for this season. They've opened the season with three straight 200-yard rushing games and have outscored their opponents 141-27 so far. Their other wins came against Presbyterian and Boston College.

Utah State: The Aggies look to get back on track when they travel to face San Jose State next Saturday.

Wake Forest: The Demon Deacons pack up and head to Boone, North Carolina to face Appalachian State on Saturday.