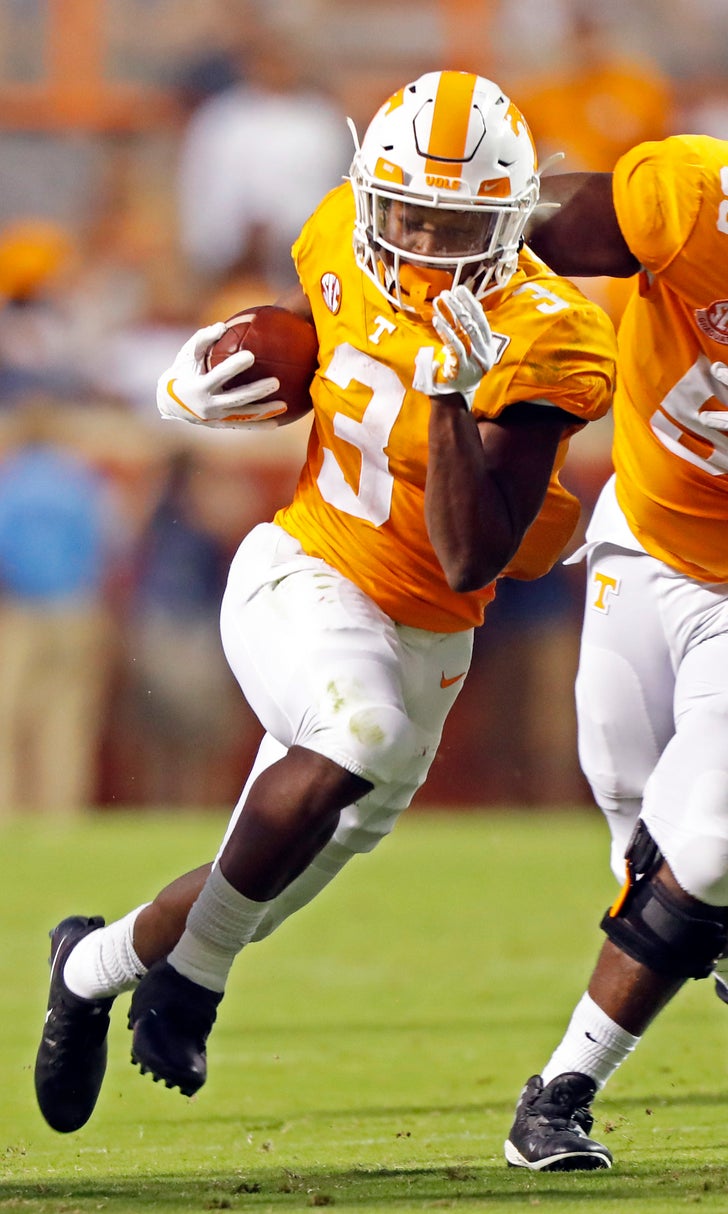 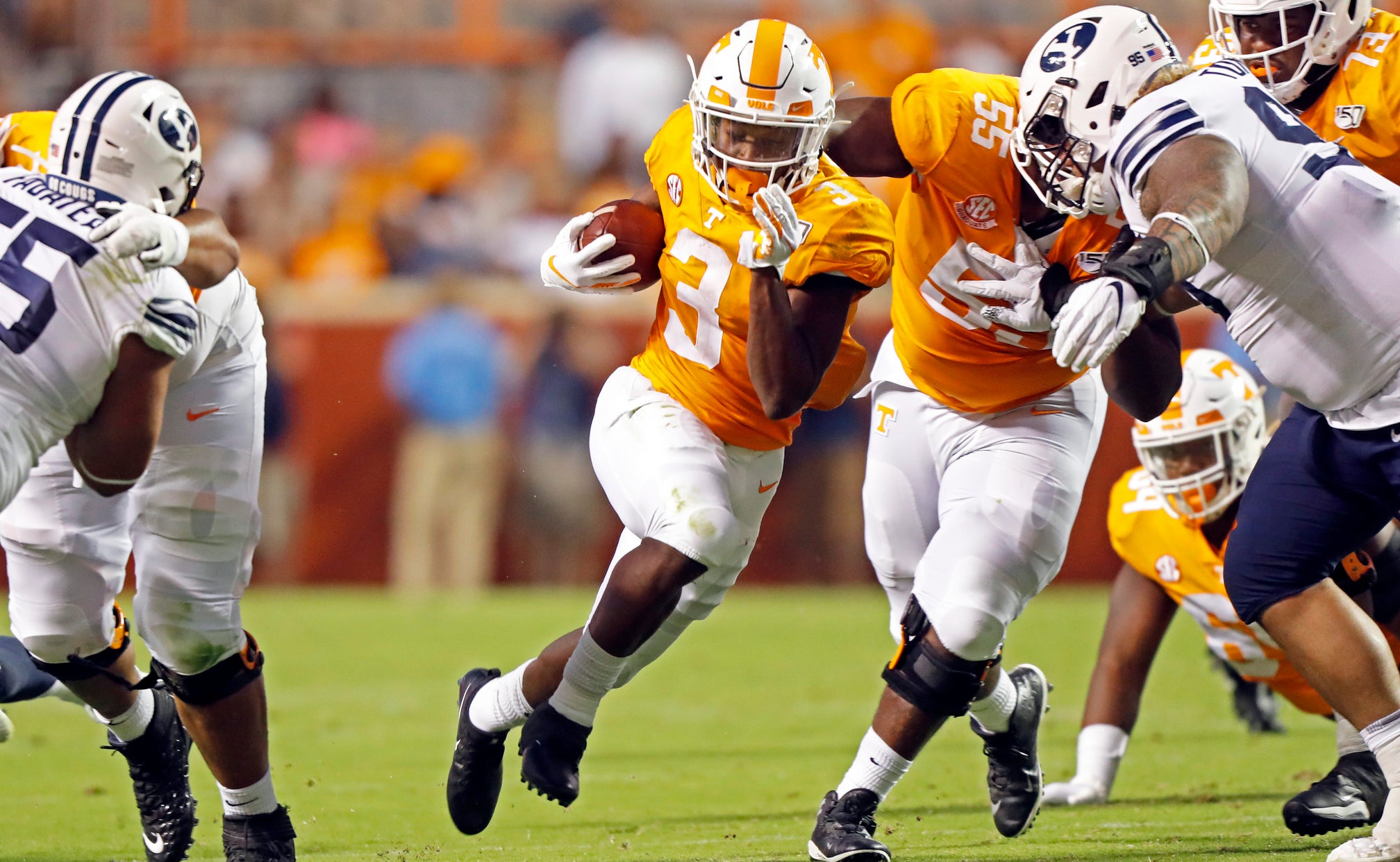 Tennessee turning to younger players except at quarterback

KNOXVILLE, Tenn. (AP) — Tennessee coach Jeremy Pruitt will be relying more and more on younger players to help the Volunteers bounce back from their worst start in over three decades.

But he's sticking with experience at the most important position on the field.

Tennessee already has freshman linebacker Henry To'o To'o (pronounced Toe-o, Toe-o) tied for the team lead in tackles, and Pruitt said more underclassmen are likely to get featured roles as well. Tennessee needs some kind of boost as it tries to turn things around after its first 0-2 start since 1988, when the Vols dropped their first six games before finishing 5-6.

"That's kind of where we're at as a program — there's lots of opportunity here," Pruitt said. "We'll continue to play some young guys, and we'll play more and more as the year goes."

One exception is at quarterback.

Pruitt said he's sticking with struggling junior Jarrett Guarantano. Tennessee's only other scholarship quarterbacks are redshirt freshman J.T. Shrout and true freshman Brian Maurer, neither of whom has taken a snap in a college game.

Tennessee hopes to give Shrout and Maurer opportunities to play Saturday against Football Championship Subdivision program Chattanooga (1-1), but Pruitt has made it clear that Guarantano remains the starter.

"There's no doubt, if you've been around our program the last six months, who the best quarterback on our team is," Pruitt said, "but there's also no doubt that sometimes after you get under the lights a little bit it's interesting to see how the guys play. We got to get both (Shrout and Maurer) live game opportunity, so we can see."

Although Tennessee's starting lineup has predominantly consisted of juniors and seniors the first two weeks, plenty of freshmen already have made major contributions.

Cornerback Warren Burrell was rated as a three-star prospect by most recruiting services, yet he's been an immediate starter and has played effectively. To'o To'o, a former top-50 recruit, already has made 15 tackles. Running back Eric Gray has shown elusiveness while splitting carries with junior Ty Chandler.

Other freshmen to earn ample playing time through the first two weeks include offensive tackles Wanya Morris and Darnell Wright and outside linebacker Quavaris Crouch.

"It's kind of one of the reasons I came here, the opportunity to play early here in the SEC," Gray said.

Pruitt showed his faith in this freshman class by having To'o To'o and Gray speak to reporters Tuesday. Last year, no freshmen were made available to the media all season.

To'o To'o, who is from Sacramento, California, said his relationship with Pruitt factored into his decision to come all the way to Tennessee.

"I had seen coach Pruitt's vision," To'o To'o said. "I trust in coach Pruitt, and I still do. I love what he has going on and the things he tells us are going to happen."

Not much good has happened for Tennessee so far this season. The Vols opened the year by falling 38-30 to 26-point underdog Georgia State and followed that up by collapsing down the stretch in a 29-26 overtime loss to BYU.

The poor start has led to increased scrutiny for Pruitt, who has gone 5-9 in 14 games at Tennessee and already has exceeded his loss total from his five seasons as a defensive coordinator at Florida State (2013), Georgia (2014-15) and Alabama (2016-17).

When Pruitt made a passing remark at a Knoxville Quarterback Club speech this week comparing guys leaving the program to mice who run to the top of a sinking boat during the movie "Titanic," he got roasted on social media for referencing that disaster while talking about his own team.

Tennessee badly needs a win to change the narrative surrounding this season, particularly since the Vols follow the Chattanooga game by facing No. 9 Florida, No. 3 Georgia, unranked but unbeaten Mississippi State and No. 2 Alabama.

These freshmen say they're ready to provide a spark.

"Everyone's saying we're going to get better," Gray said. "You can feel it in the atmosphere that we're on the verge of something special."