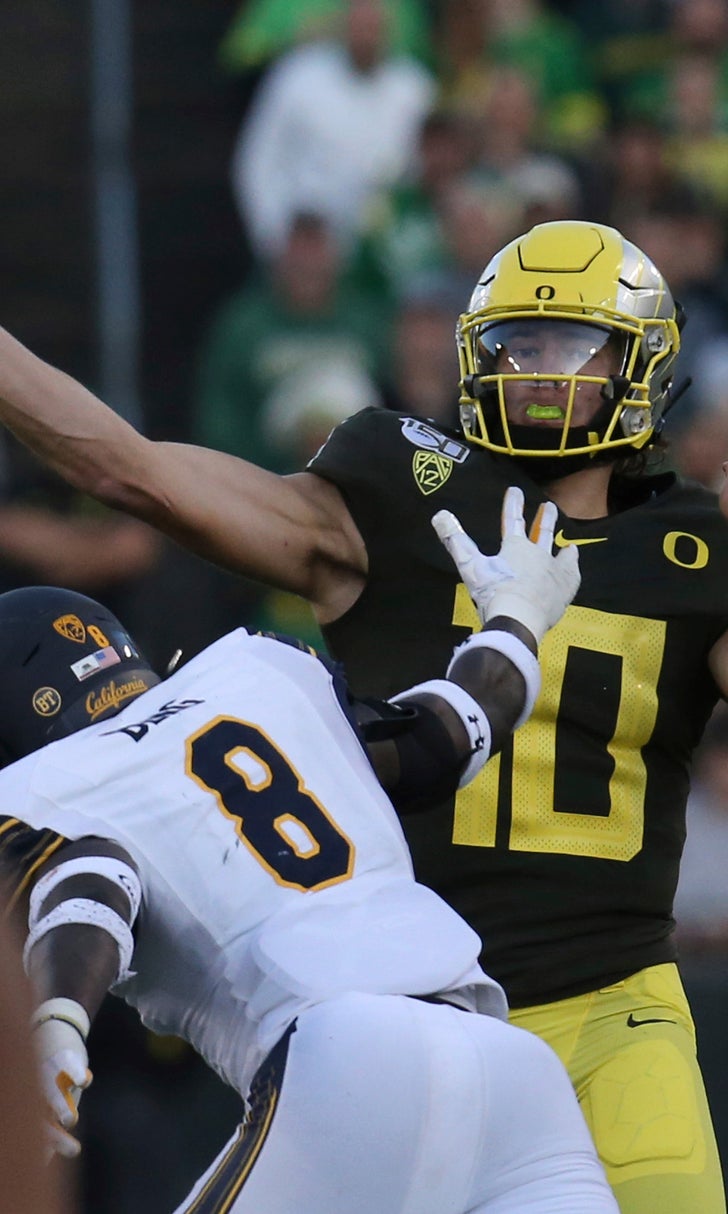 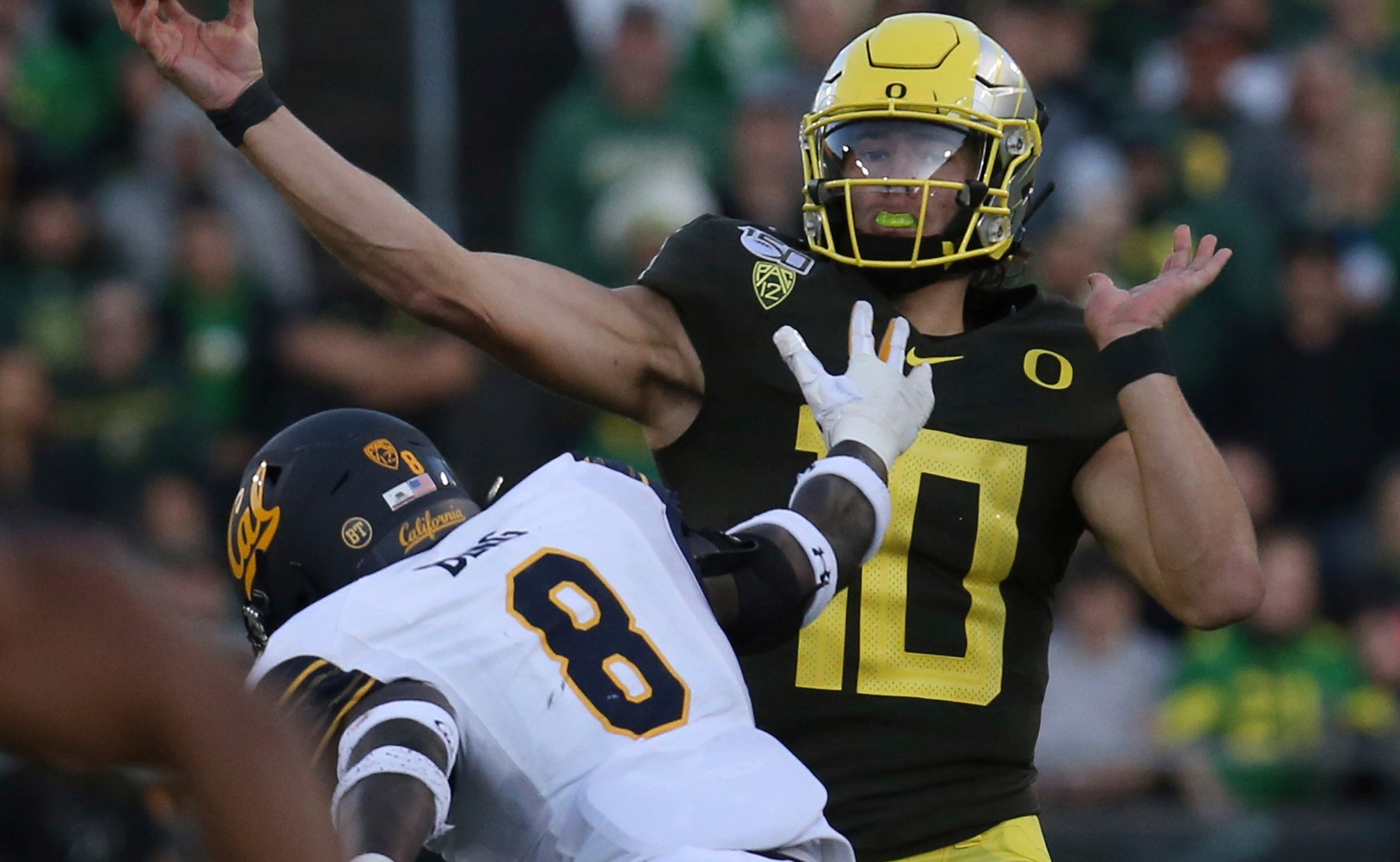 PORTLAND, Ore. (AP) — When Oregon found itself uncharacteristically scoreless at halftime against California, senior linebacker Troy Dye took it upon himself to deliver a halftime speech.

The No. 13 Ducks went on rally for a 17-7 victory over California on Saturday night.

"Before I could say anything Troy Dye had addressed the team, with words that were powerful, that made it really clear we were not playing up to our standard, what we are capable of and what we must do," coach Mario Cristobal said.

Oregon (4-1, 1-0 Pac-12) trailed until Cyrus Habibi-Likio's 1-yard touchdown run with 1:38 left in third quarter made it 10-7. Justin Herbert extended his streak to 33 consecutive games with a touchdown pass, connecting with Jaylon Redd with 7:14 to go in the game.

The Ducks, whose only loss this season came in the opener against Auburn, were held scoreless in the first half by the surprisingly resilient Golden Bears (4-2, 1-2).

Junior Devon Modster made his first start for Cal in place of injured quarterback Chase Garbers. After struggling last week when Garbers got knocked out of Cal's loss to Arizona State, Modster fared better against Oregon's defense.

Modster threw for 190 yards and a touchdown against the Ducks, who hadn't given up a TD since the game against the Tigers.

Herbert's streak of games with at least one touchdown pass is the longest in the nation among active players. He was tied for seventh nationally with 14 touchdown passes this season going into the game.

Herbert threw his first interception of the season on Oregon's opening drive. He went into the game on a streak of 174 consecutive passes without a pick.

Cal senior safety Ashtyn Davis snagged the interception. Cal's secondary, dubbed "The Takers," has amassed 27 career interceptions, but just three this season. The Golden Bears went on to score on the drive when Modster connected with Chris Brown on a 22-yard touchdown pass.

The Ducks got to the Cal 11 at the end of the opening quarter, but Travis Dye — Troy Dye's younger brother — fumbled and Cal recovered for Oregon's second red-zone turnover of the game.

After Herbert's 27-yard pass to diving receiver Johnny Johnson III in the end zone was ruled incomplete, Camden Lewis missed on a 45-yard field goal to keep the Ducks scoreless. But Lewis made a 28-yard field goal with 7:32 left in the third quarter and Oregon was finally on the scoreboard.

Troy Dye intercepted Modster on a tipped ball in the final period. Herbert got a key first down with a 26-yard scamper but was pushed into the sideline camera stand and a late hit call moved the Ducks to the Cal 13. The drive ended with a 1-yard scoring pass from Herbert to Redd.

"Troy and the rest of the leaders did an excellent job, it was really rewarding to watch the growth of a football team at halftime," Cristobal said. "From our opinion, that's a huge step for our program."

It was a surprisingly sloppy game for the Ducks, who were coming off an off week after a 21-6 victory at Stanford. The Ducks were known for fast starts this season, outscoring opponents 84-15 in the first halves of their four games this season. Herbert had 10 first-half touchdowns.

"It's something that's been a lot better this year; we're communicating, we're talking, and we know that's not our type of football so we corrected that, and we did our best and fortunately we won," he said.

California: Cal was undefeated heading into the ASU loss game and ranked No. 15 — the team's highest spot in the AP Top 25 since 2009. ... Cal has lost six straight games at Autzen Stadium. ... Thomas also missed a 46-yard field goal late in the fourth quarter. ... Cal was hurt when center Michael Saffell was injured and had be carted from the field. Freshman Matthew Cindric was pressed into duty. "It hurts to lose him, his communication, just all-around player," Cindric said. "But we have a next man up mentality. Every week I work on center snaps, and center plays."

Oregon: The Ducks' streak of three games without allowing a touchdown was its longest since 1933. ... The Ducks were hurt in the opening half when they lost running back CJ Verdell to what appeared to be a right ankle injury. Verdell had 10 carries for 46 yards when he was hurt. ... Starting defensive end Gus Cumberlander had to be carted to the locker room midway through the final period with an apparent knee injury. ... Oregon saw the season debut of senior wide receiver Brenden Schooler, who started. Freshman Mycah Pittman also made his first appearance of the year.

FAN THWARTED: Habibi-Likio tackled a fan that burst on the field during the game, but felt bad about it afterward: "If he has Instagram or Twitter, you can follow me and message me and we can go get ice cream," he said. "He was having fun but we had to go. We had to get going."

California has a week off before hosting Oregon State on Oct. 19.