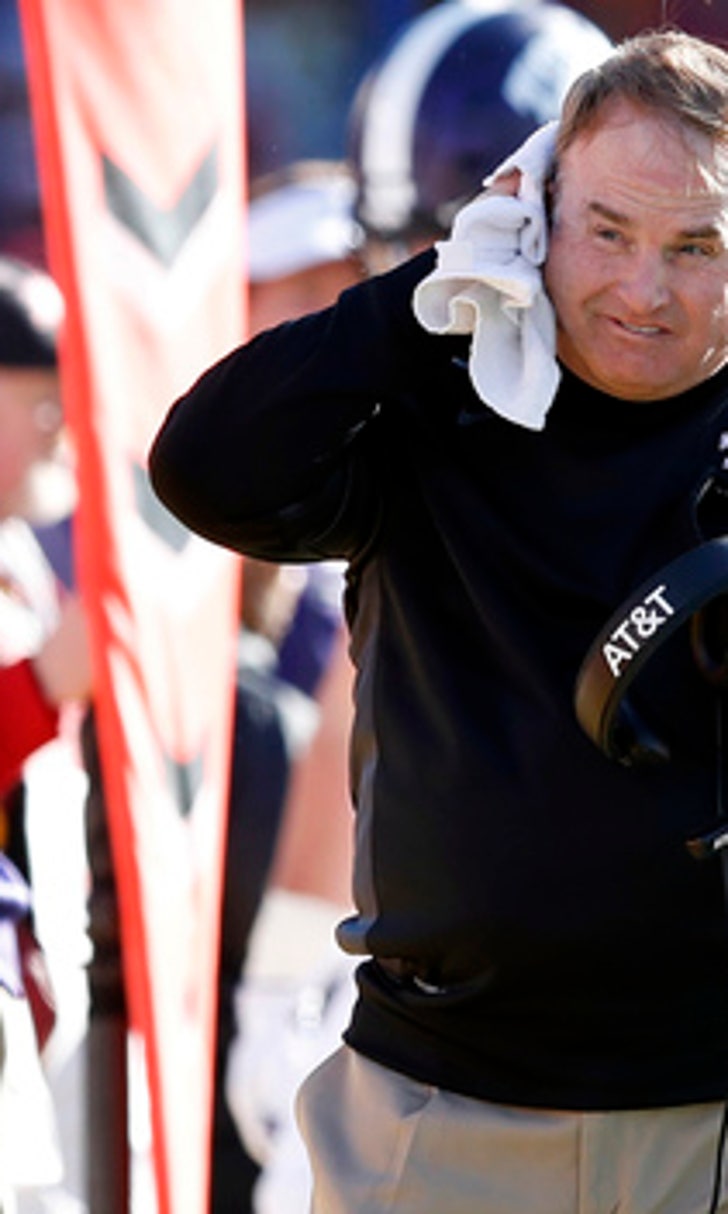 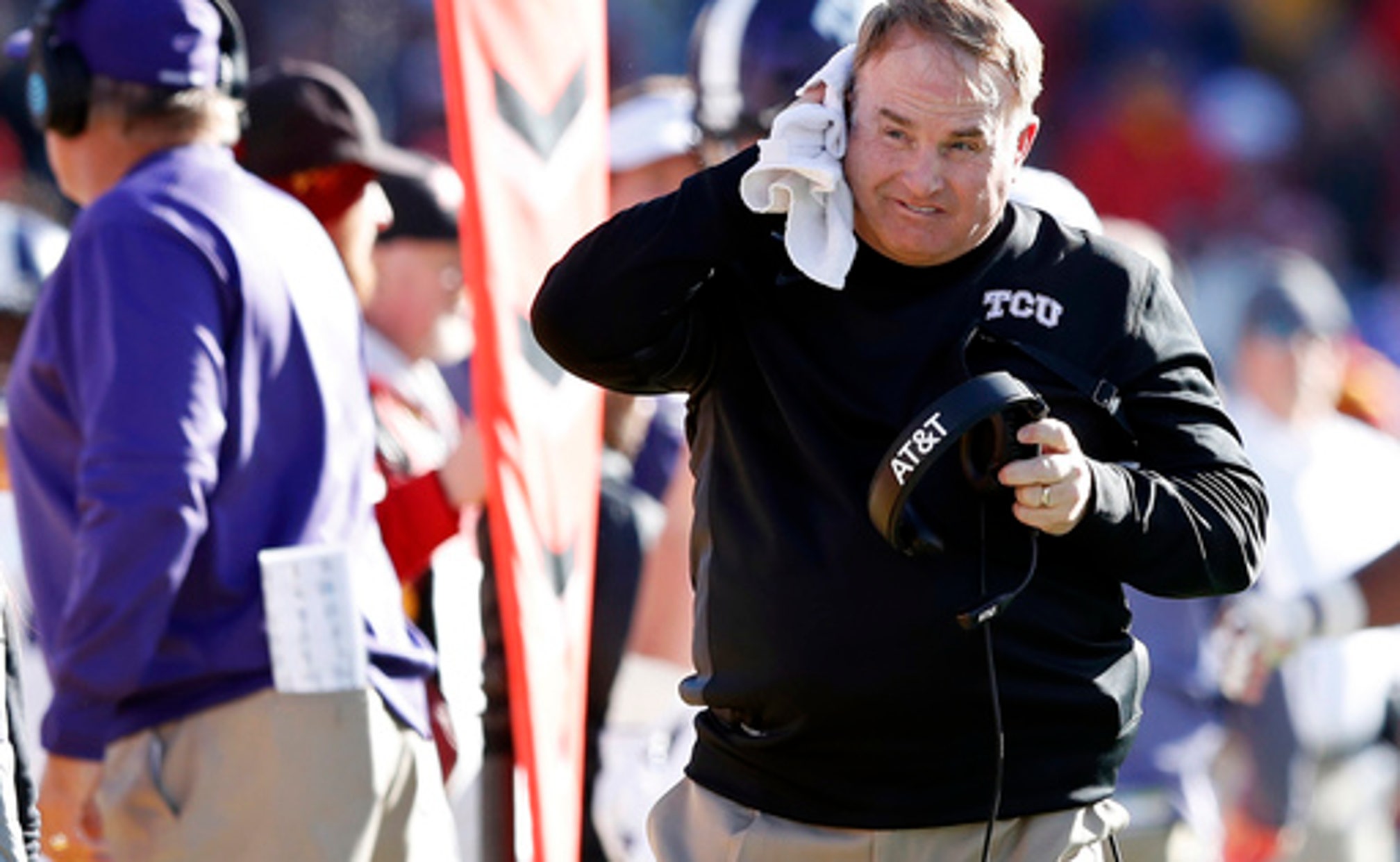 Emotional part of season for No. 10 TCU starts against Texas

FORT WORTH, Texas (AP) Now is when things start to get emotional for TCU, and not because the No. 10 Horned Frogs are coming off their first loss .

The Frogs (7-1, 4-1 Big 12) are still tied for the conference lead and still in contention for a spot in the College Football Playoff - they were eighth in this week's initial CFP rankings. There are four games left in the regular season, starting Saturday night at home against Texas (4-4, 3-2).

Coach Gary Patterson calls this final segment of the regular schedule ''emotional games'' since TCU plays the three other Texas schools in the Big 12. The Frogs only leave the state next week to play at No. 8 Oklahoma, the lone Big 12 team ahead of them in CFP rankings at No. 5.

As for all the possibilities still in front of the Frogs, the coach had a clear and concise message for his team.

''Win or lose from last week, we control our own destiny,'' defensive tackle Chris Bradley said when asked what the coach told them. ''We have to take each game, same way, same approach and we're got to go out there win each and every week.''

Texas is still looking for a signature victory under first-year coach Tom Herman after several near-misses.

Before last week's 38-7 victory at winless Baylor, the Longhorns had consecutive losses to Oklahoma and No. 11 Oklahoma State by a combined eight points. There was that double-overtime loss at then-No. 4 USC in September before a 17-7 win at Iowa State. The Cyclones have since won four in a row, including over Oklahoma and then 14-7 last week over TCU, going from unranked to No. 14 and part of that four-way tie for the Big 12 lead.

The Longhorns are only one game out of that first-place logjam, already with a win against one of the co-leaders and a chance Saturday to get another one. But Herman isn't talking to his team about the Big 12 race.

Some other things to know when the former Southwest Conference rivals play in the Big 12 for the fifth time (TCU is 4-1 in the Big 12 matchups; Texas was 61-20-1 before that):

TCU has the Big 12's top defense, allowing 287 total yards and 14.8 points per game. Texas is giving up 21 points (third) and 371 yards (fourth) per game. The Longhorns are tied for the league lead with 10 interceptions, and returned four for touchdowns.

Texas freshman quarterback Sam Ehlinger was back at practice this week after missing the Baylor game while in concussion protocol. Shane Buechele completed 27 of 34 passes for 256 yards in only his fourth game this season. Ehlinger has missed two of the last five games. Herman acknowledged that the lack of quarterback continuity has been hard.

''It would be foolish of me to say otherwise,'' the coach said. ''The one thing is they're not complete departures from each other.''

Patterson said both are ''hard chargers'' who run the same offense will ''try to do whatever they have to do to win.''

HE WENT ALL THE WAY - TWICE

KaVontae Turpin has returned kicks for touchdowns in each of the last two games for TCU. Turpin's 94-yard kickoff return opened the second half against Iowa State, a week after a 90-yard punt return for a score against Kansas. Turpin's four career special teams TDs matched the school record.

PUT IT BEHIND HIM

Frogs QB quarterback Kenny Hill had three turnovers against Iowa State. One of his two interceptions and his lost fumble came after halftime when TCU was inside the Cyclones 10. TCU had a season-low 307 total yards and didn't have an offensive touchdown. He was 12-of-25 passing for 135 yards. Patterson said Hill was understandably upset after the game, but was fine by Sunday.

TCU is 4-0 at home this season, including two shutouts, and are 80-19 at home in Patterson's 17 seasons. Texas won there four years ago, 30-7 in a game that included a three-hour weather delay and ended after midnight.