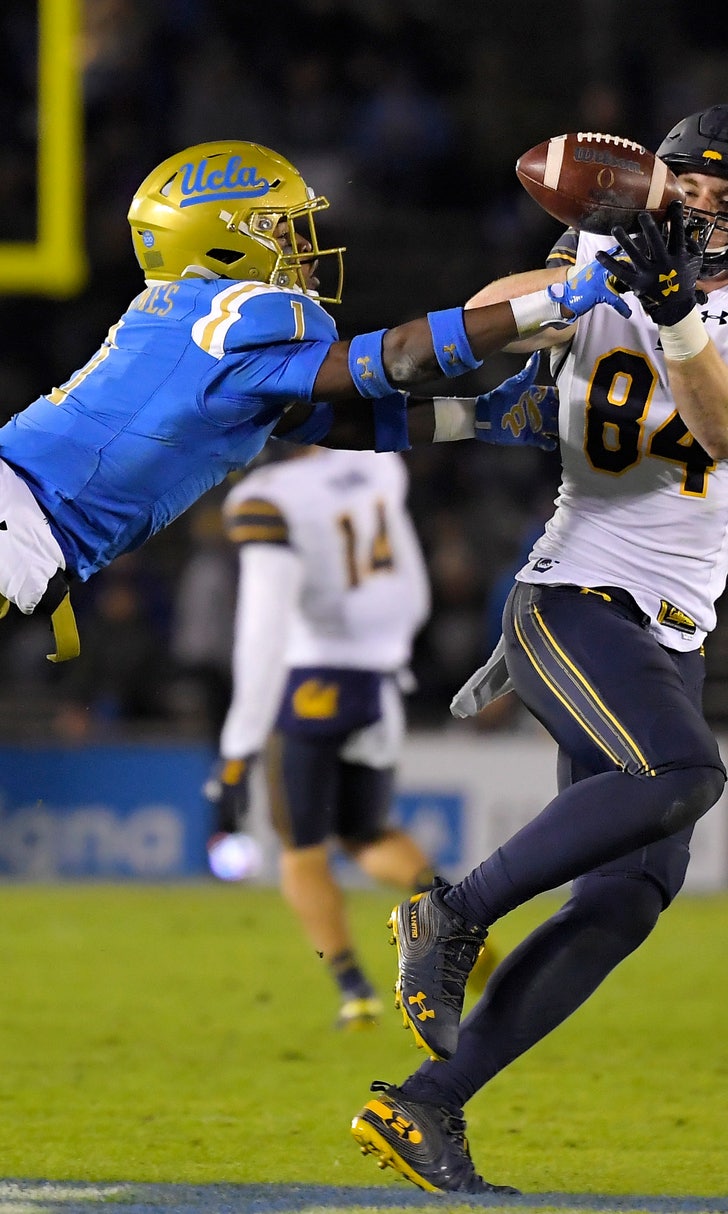 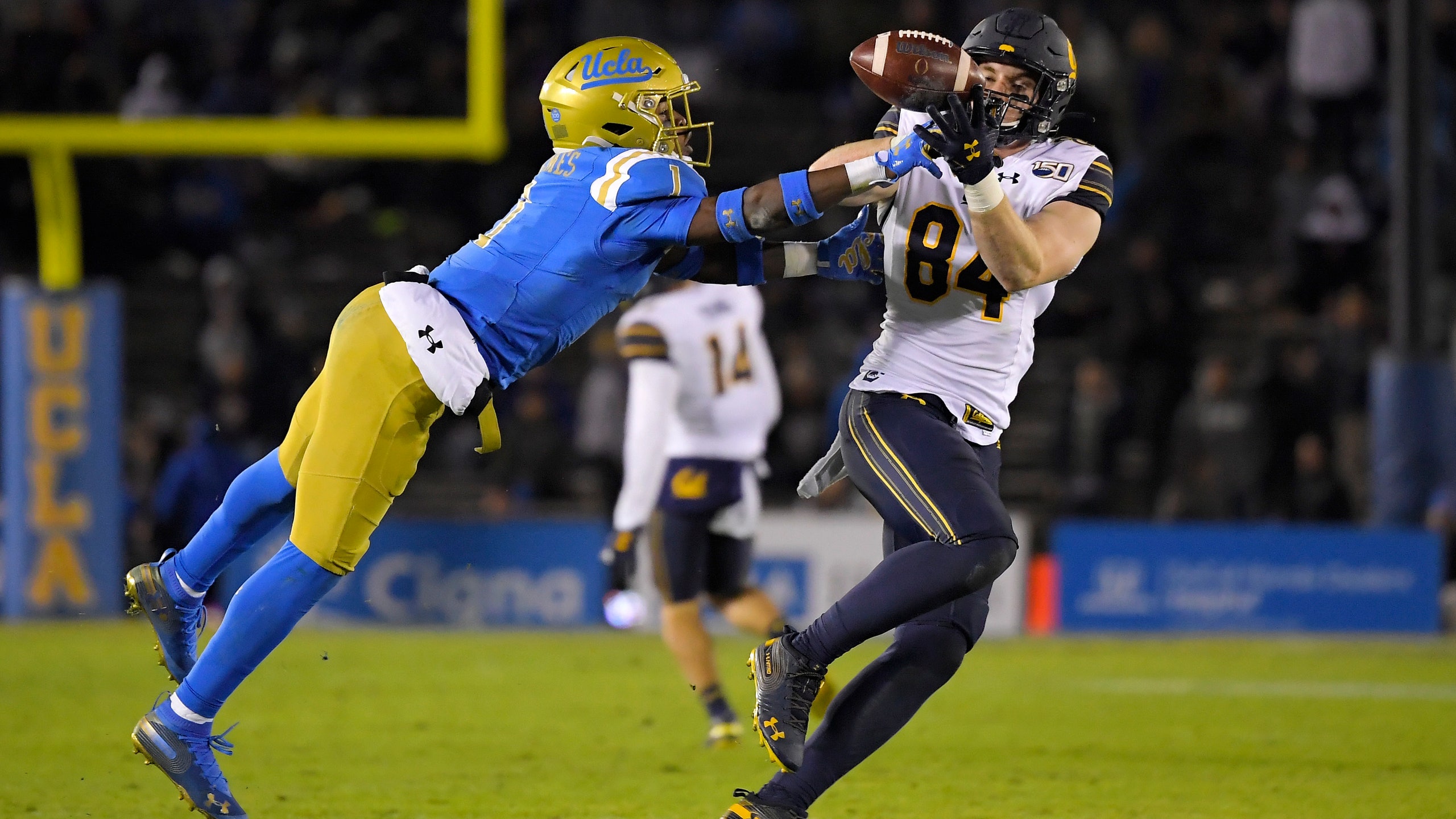 PASADENA, Calif. (AP) — Chase Garbers and California were determined not to rest on their laurels after last week’s win over Stanford in The Big Game.

The Golden Bears showed no signs of a letdown as they defeated UCLA 28-18 on Saturday night at the Rose Bowl. Cal (7-5, 4-5 Pac-12) was led by Christopher Brown Jr.’s 111 yards rushing and two touchdowns while the defense had a season-high six sacks and held the Bruins to 58 rushing yards.

“Many people might have seen this as a trap game coming off the win over Stanford, but I think we came out and imposed our will on them. We had that mindset during practice all week,” said Garbers, who completed 17 of 29 passes for 230 yards with a touchdown and an interception.

Brown — who had his second 100-yard game of the season — scored both of his touchdowns in the second half as the Golden Bears completed the regular season with wins in three of their last four.

Cal led 14-10 at halftime before they went up by two scores with 5:38 remaining in the third quarter on Brown’s 1-yard run up the middle. After UCLA responded with Joshua Kelley’s 1-yard TD run and Dorian Thompson-Robinson’s pass to Delon Hurt for the 2-point conversion, Brown got another huge hole and went 11 yards to give the Bears a 28-18 advantage 7 seconds into the fourth quarter.

“I thought our offense did a real nice job of getting into a rhythm. Chase did some good things with his feet,” Cal coach Justin Wilcox said. “Defensively we did enough. We got some good negative plays with the pass rush but did not tackle well in the secondary.”

UCLA’s Dorian Thompson-Robinson completed 23 of 39 passes for 278 yards with a touchdown and an interception but was sacked five times. The sophomore was forced out of the game during the fourth quarter due to a nagging ankle injury. Austin Burton was 8 of 9 for 65 yards on the final drive.

Kelley gained 76 yards on 19 carries in his final game as he became the eighth running back in school history to record back-to-back 1,000-yard seasons.

“Obviously we wanted to win this game for our seniors. We don't have many of them, but we've talked about what they've done,” UCLA coach Chip Kelly said. “I thought we fought and we battled, but we didn't do enough to win.”

UCLA (4-8, 4-5) got on the board first when Thompson-Robinson found Jaylen Erwin for a 19-yard touchdown with 8:26 remaining in the first quarter. Cal went three-and-out on its first two drives before getting touchdowns on its next two. Makai Polk tied it when he caught a screen pass from Garbers and went 44 yards with 3:04 remaining in the first.

The Golden Bears then took a 14-7 lead with 9:56 remaining in the second quarter on Garbers’ 1-yard sneak. JJ Molson brought the Bruins within 14-10 at halftime with a 31-yard field goal on the last play of the first half.

Cal linebacker Evan Weaver had nine tackles and broke the school’s single-season record that had stood for 34 years. Weaver, a finalist for the Butkus Award, finished with 173 tackles during the regular season, surpassing Hardy Nickerson’s mark of 167 set in 1985.

Weaver leads the nation in tackles and has reached double digits in 17 of his last 19 games. The senior has 403 career tackles and is the fourth player in school history to have 400 or more.

Kelley went over the 1,000-yard mark for the season by hurdling over Cal safety Jaylinn Hawkins for a 20-yard gain during the first quarter. That run made him the first Bruins back since Paul Perkins in 2015 to record consecutive 1,000-yard seasons.

“It feels pretty cool, because there's been so many incredible running backs here. Maybe something I can reflect about,” Kelley said. “For me individual-wise, I think it's humbling, but it showed anybody can come in here and do it.”

California: With Saturday’s win and a 15-14 victory at USC last year, the Bears have won games at the Southern California schools in back-to-back years for the first time since the 1970-71 seasons.

“Growing up I watched games at the Coliseum and the Rose Bowl. To get wins at both places is big,” said sophomore wide receiver Nikko Remigio, one of many Southern California natives on the roster.

Rumors are swirling about Kelly’s future in Westwood, but he said he emphatically denied that he is seeking an exit.

“My commitment level is the same since I've been here. It's been 100%. We go to work every day and give everything we have to this program,” he said.

California: Will play in a bowl game for the third straight year.