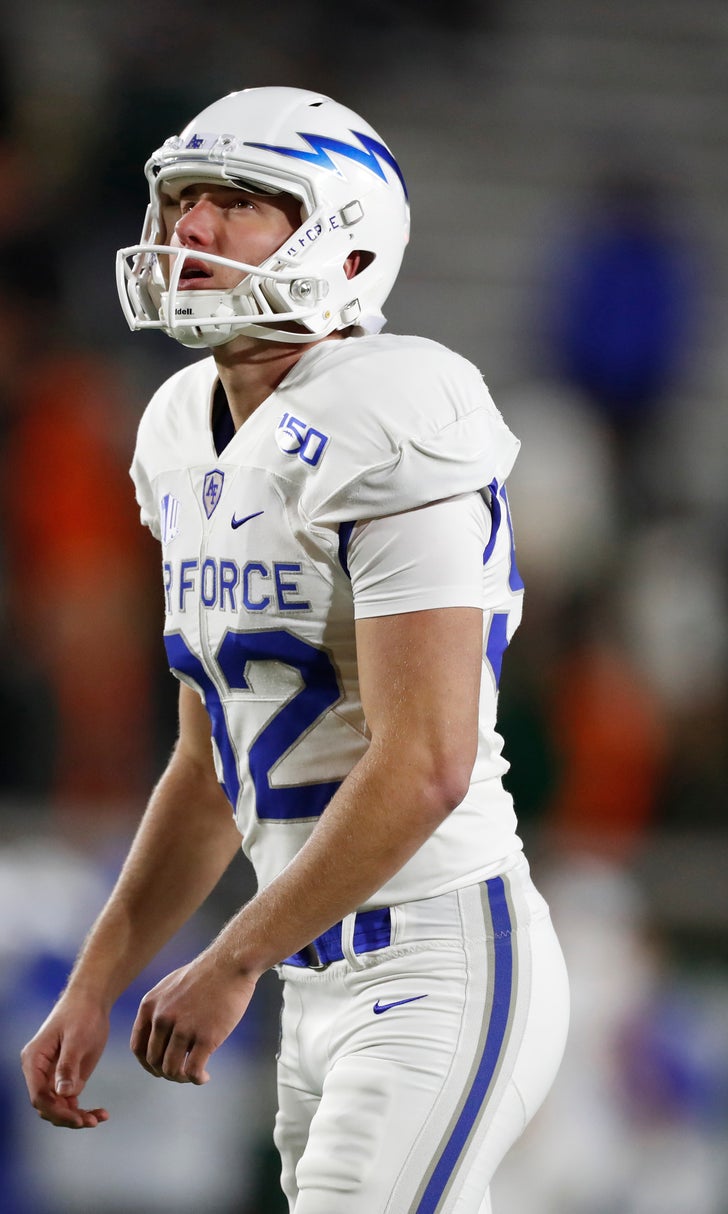 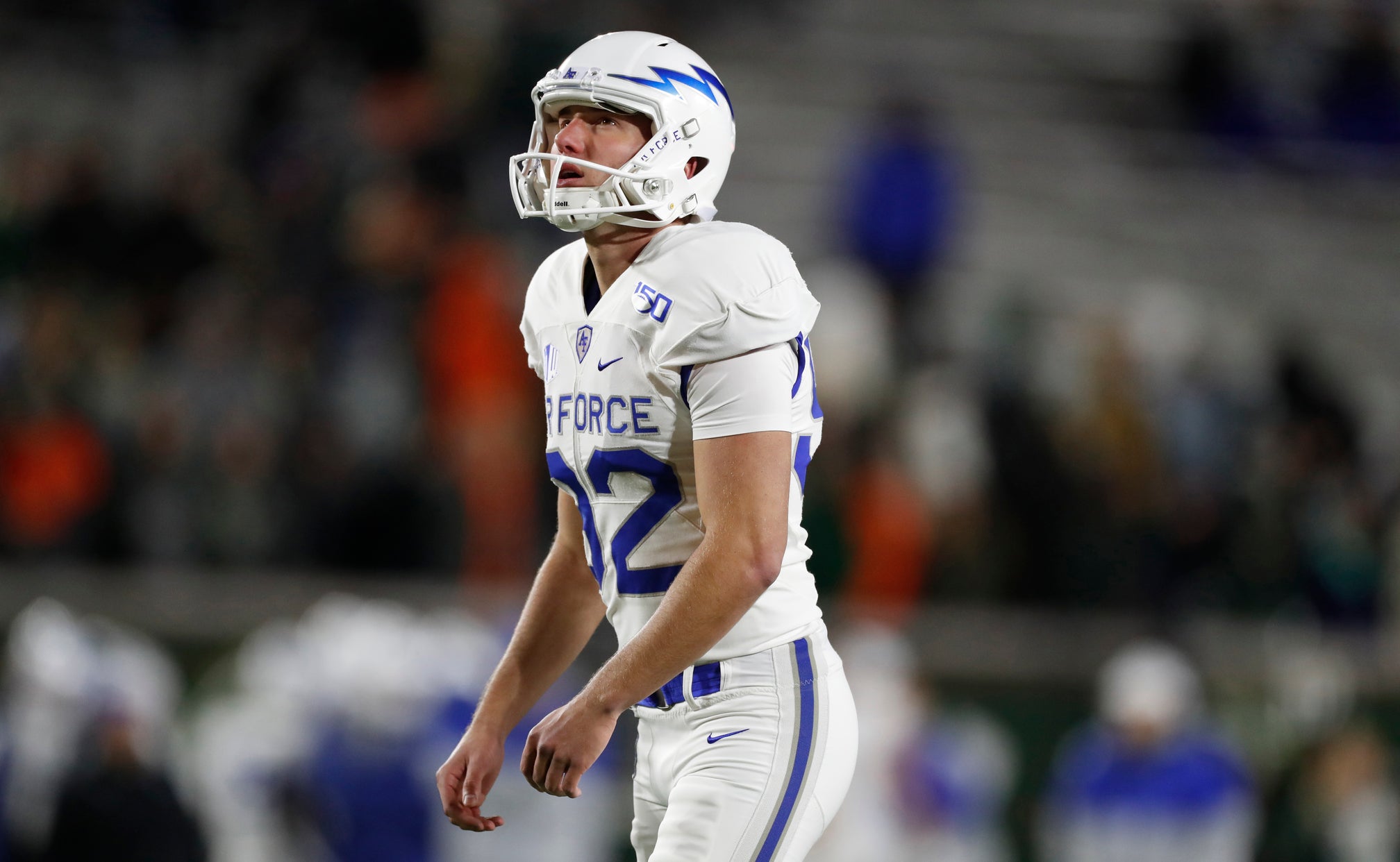 AIR FORCE ACADEMY, Colo. (AP) — Air Force kicker/guitarist Jake Koehnke hasn’t missed a beat all season — or so much as a field goal.

He is jammin’ these days, a senior from Carlsbad, California, who has hit all the right notes between his rock-steady performance for the Falcons and his side project of rocking out with a band set to locally tour after the season. And while his guitar-strumming fingers are no longer relegated to playing second fiddle, his powerful right foot still takes center stage.

Koehnke is 10 for 10 this season and was recently named a semifinalist for the Lou Groza Award, which recognizes the nation’s top kickers. The list also includes names such as Georgia senior Rodrigo Blankenship, who’s in contention for a spot on The Associated Press All-America team presented by Regions Bank.

“It’s been super-exciting for me because I just love being able to make an impact,” said Koehnke, who’s 45 of 49 on extra points for an Air Force team that’s 9-2 heading into the regular season finale this weekend against Wyoming. “Every game, I look forward to hoping to be able to contribute and put some points on the board.”

The nerves when he kicks are nearly nonexistent. For that, he credits holder/punter Charlie Scott, who always has a quip to lighten the mood before a big boot. There’s also the advice of Scott’s older brother, JK, a punter with the Green Bay Packers.

“I heard an interview with JK once where he’s like, ‘We're just kicking a football,’” said Koehnke, who handled the kicking duties, including field goals, extra points, kickoffs and punting at the end of last season. “So, when I go out there, my mind goes blank. I just try to do what he said — kick the football.”

The nerves when he takes a stage? Now that will be a different tune. Leading up to the first practice with his modern/alternative rock band, “ Between the Heart,” he grew more and more anxious than for any kick of his career.

“It's funny to think about, because I've been kicking for so long and I’m used to all eyes on me,” said Koehnke, who hit a 57-yarder against Utah State on Oct. 26. “But being part of a band is something so new and sure, it should be the same as kicking. But the thought of playing at a gig, it makes me a little more uneasy than kicking a field goal.”

How this came to be: Koehnke attended a karaoke night in nearby Colorado Springs. Some of the band members were on stage performing Fall Out Boy’s “Sugar, We’re Goin Down,” which happened to be one of Koehnke’s favorite songs as a kid.

After the performance, Koehnke approached them and said he was a guitarist, too — should they ever need one. A few months later, Koehnke posted some clips on social media and the group reached out to him.

Turns out, their guitarist was enlisting in the Air Force.

“Ironic, right?” said Koehnke, whose band intends to play gigs in Colorado Springs and Denver. “I tried out and they said I was good enough to be part of the group.”

As for his upcoming plans — after a bowl game, obviously — Koehnke hopes to become an Air Force pilot. Or maybe an NFL kicker, especially with Defense Secretary Mark Esper issuing new guidelines that paves the way for athletes attending the nation’s military academies to seek waivers to play professional sports upon their graduation.

Down the road, possibly even a music career.

“For right now, I’m just trying to focus on going 1 for 1 with every kick,” Koehnke said.

Remember that sophomore slump? It’s over. Lawrence has not thrown an interception in his last four games to go with 13 touchdown passes. He has completed 77.5% of his passes and averaged 11.7 yards per attempt. Yes, the competition has been far from elite, but Lawrence is rolling heading toward the postseason.

Fromm was never going to put up the gaudy passing stats that some other elite quarterbacks do, but this year even his efficiency is way down from 171.22 last year to 144.05. He has been under 50% completions his last three games, none of which cracked 200 yards passing.

The 330-pound, second-year starter has been pivotal in LSU’s ability to combine some power running with its potent passing game.

“Lewis was dominant in a record-setting win over Arkansas,” Cubelic said. “Very physical in pass protection and excellent working combo blocks in the run game.”

The Sooners defense has improved this year and Murray is leading the way with 79 tackles, including 12 for loss. Hubbard is leading the nation in rushing at 166.55 yards per game. The Cowboys might have to lean on him even harder in the Bedlam showdown with their starting quarterback and star receiver both sidelined. Expect Murray and Hubbard to see a lot of each other.