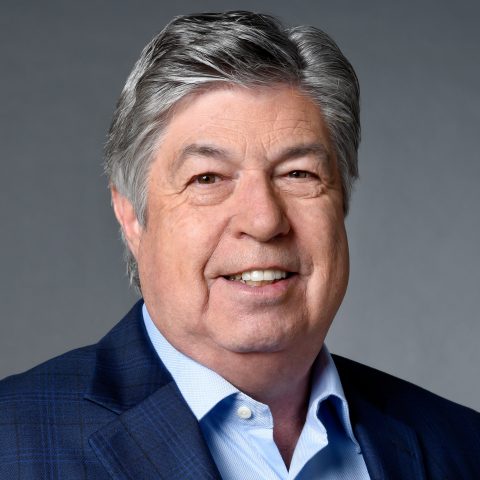 Broadcasting veteran Mike Joy brings 50 years of motor sports experience to the booth as lead race announcer for FOX NASCAR in 2020, his 20th consecutive season with the network, alongside NASCAR Hall of Famer Jeff Gordon. Joy has led the network’s broadcast team since 2001, FOX’s first year as a NASCAR broadcast partner.

Joy has broadcast most major forms of American motorsports for television and radio. Prior to joining FOX in 2001, Joy anchored CBS Sports’ coverage of the DAYTONA 500 from 1998-2000 after earning his stripes as a pit reporter for 15 years. In addition, Joy called the “Great American Race” for Motor Racing Network (MRN) Radio from 1977-’83 (as a turn announcer and anchor). The season-opening DAYTONA 500 marks the 41st DAYTONA 500 for which he has been part of live TV or radio coverage. In 2020, Joy covers his 45th Daytona Speedweeks.

He is a charter member of the prestigious NASCAR Hall of Fame Voting Panel, and in December 2013, was named sole media representative on the Hall’s exclusive Nominating Committee. Joy previously served on the voting panel for the International Motorsports Hall of Fame.

Joy was the 2011 recipient of the esteemed Henry T. McLemore Motorsports Journalism Award, recognizing career excellence in the field, as well as the 2018 North Carolina Motorsports Association (NCMA) Jim Hunter Memorial Media Award. A former vice president of the National Motorsport Press Association, Joy joined Chris Economaki as the first racing journalists to receive major recognition for their work in all three major disciplines: radio, television and print. In 2019, he was inducted into the New England Auto Racers Hall of Fame.

He hosted FSN’s Formula One coverage from 1998 to 2000. At CBS Sports, Joy contributed to the 1992 Olympic Winter Games coverage and called NCAA championship events in soccer, swimming and diving, track and field, gymnastics and lacrosse. He also served as a sideline reporter and halftime host for CBS college football. In 18 years with CBS, Joy called such diverse events as the Hambletonian, Pro Beach Soccer and World Cup skiing.

His career began as a public address announcer at Riverside Park Speedway in Agawam, Mass., in 1970 while attending the University of Hartford and Emerson College. He spent 14 years with MRN (1977-‘90) and anchored the first live NASCAR CUP SERIES telecasts on ESPN (1981) and TNN (1991). Joy has been a race track promoter and advertising executive, and co-owns the New England distributorship for Sunoco Race Fuels.

Joy is an accomplished sports car racer, winning races at Lime Rock, Pocono, Watkins Glen and New Hampshire, and has competed in the Rolex 24 at Daytona, America’s premier endurance race. Joy is well-known as TV host of the Rolex Monterey Motorsports Reunion and as on-the-block expert for TV coverage of Barrett-Jackson collector car auctions for more than a decade. In August 2012, his drive in Historic Trans Am at Laguna Seca won the Bonham’s Cup, and in September 2013, he won a Historic Trans Am race at Lime Rock.

Joy was born in Chicago and raised in Connecticut. He served four elected terms to the Windsor, Conn., town council. Joy and his wife, Gaye, reside in North Carolina with children Scott and Kaitlyn. Follow him on Twitter at @mikejoy500.