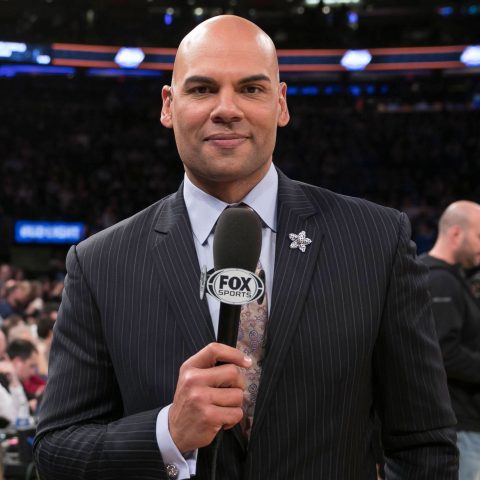 Former UConn star Donny Marshall is a studio and game analyst for FOX Sports’ college basketball coverage. He has also served as an analyst for the Jr. NBA Global Championship since FOX Sports first televised the event in 2018.

Marshall played for the University of Connecticut from 1991-95 and was named a team co-captain in his junior and senior seasons. A member of the program’s All-Century team, Marshall was drafted by the Cleveland Cavaliers in the second round of the 1995 NBA Draft. He played five seasons in the NBA and was a member of the New Jersey Nets’ back-to-back NBA Finals teams in 2002 and 2003.

Marshall joined FOX Sports prior to the 2013-14 season – the network’s first covering college basketball, and worked as a game and studio analyst. He also works as an analyst during Brooklyn Nets telecasts on the YES Network and calls NCAA Men’s Basketball Final Four games for Westwood One’s national radio broadcast. Marshall has served as an analyst for NBC Sports, NBA TV and ESPN, covering college hoops and the NBA, also calling men’s basketball games during the 2012 Summer Olympics in London for NBC. Marshall worked as a color commentator for the Boston Celtics on Comcast SportsNet in New England from 2005-13, working both in studio and courtside for over 600 games, including the team’s 2008 championship season.

A native of Seattle, Wash. … Began playing basketball at the age of 15 and was part of the No. 2 recruiting class in the country at UConn in 1991…Received a bachelor’s degree in business management from the University of Connecticut… Serves on the university’s Board of Trustees and is a board member of First Tee of Connecticut … Holds youth basketball camps in Massachusetts and Connecticut during the summer months.