King Corbin got a taste of his own medicine (a.k.a. dog food) after teaming with Dolph Ziggler & Robert Roode and coming up short against Roman Reigns & The Usos in the main event of Super SmackDown. Elsewhere, Braun Strowman finally got his opportunity to take on Shinsuke Nakamura for the Intercontinental Title, and The Monster Among Men made the most of it. 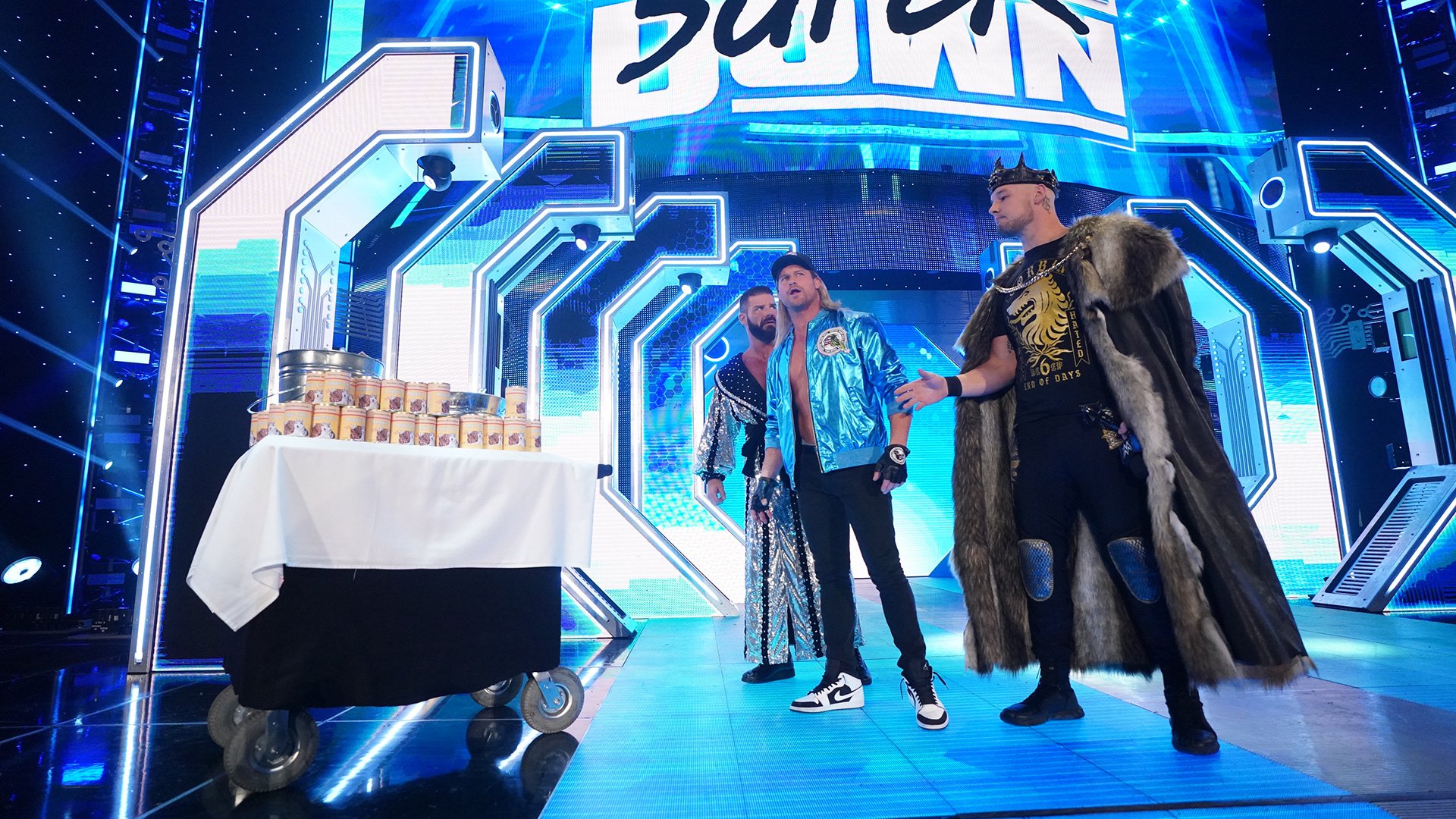 Roman Reigns and The Usos arrived to address the WWE Universe ahead of their Six-Man Tag Team Match against King Corbin, Dolph Ziggler & Robert Roode, but they were quickly interrupted. Corbin was still furious over his loss to Reigns at Royal Rumble and claimed that The Big Dog never would have won if The Usos hadn’t gotten involved. Corbin replayed the footage of him embarrassing Reigns by showering him in dog food several weeks ago, leading to The Big Dog making a massive challenge to Corbin and crew tonight: The losing team in the Six-Man Tag Team Match would have to eat dog food. The table was now literally set for a high-stakes main event.

The Miz & John Morrison def. Heavy Machinery, The Revival and The Lucha House Party to earn a SmackDown Tag Team Title Match against The New Day at WWE Super ShowDown 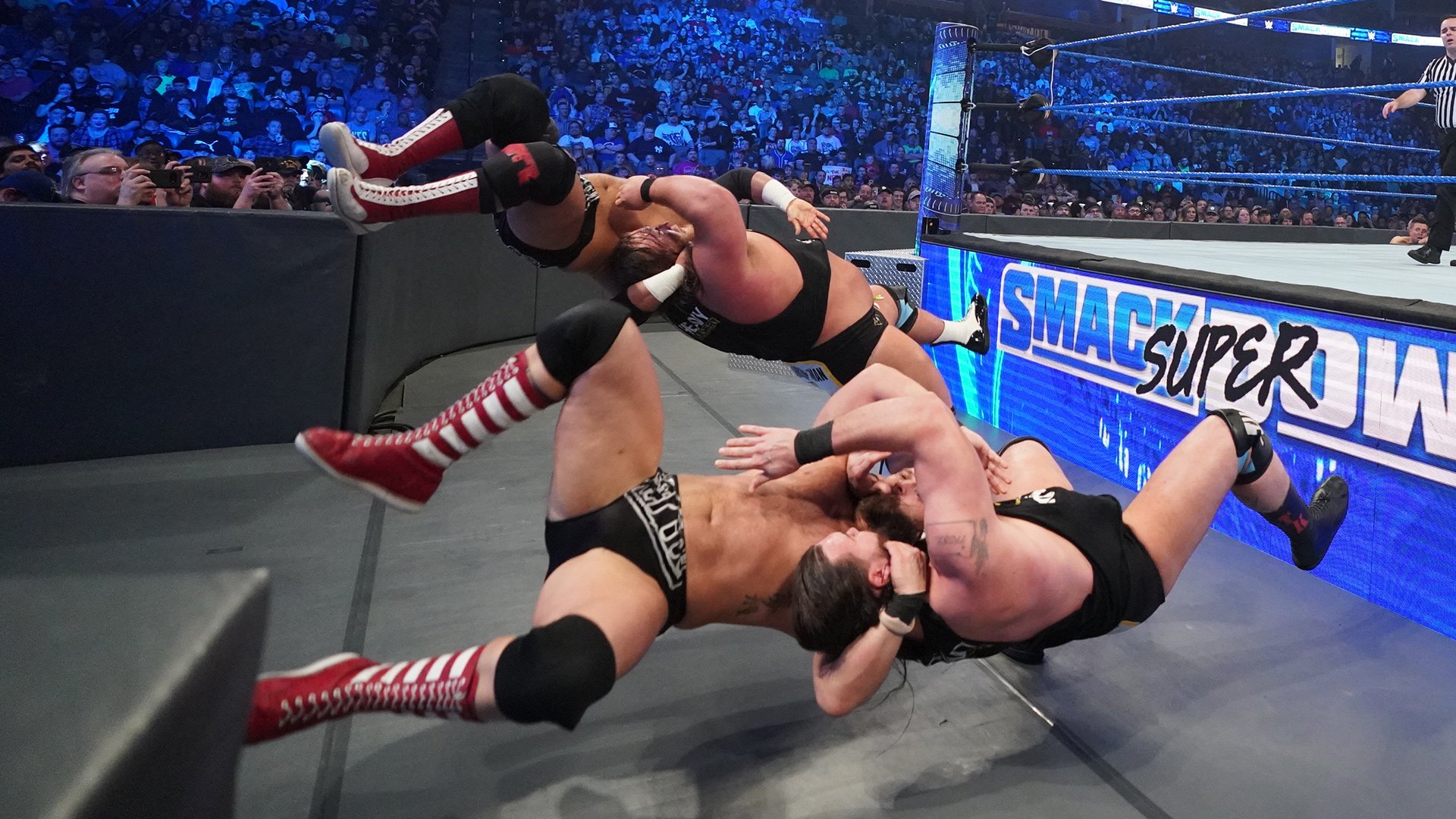 With the opportunity to challenge The New Day for the SmackDown Tag Team Titles at WWE Super ShowDown on the line, Heavy Machinery, The Lucha House Party, The Revival and The Miz & John Morrison collided in a Fatal-4 Way Tag Team Match.

All four teams looked to gain the edge in a match that allows you to tag in anyone, not just your partner. In the pivotal moments, The Revival seemed moments away from returning to their winning ways, but Miz & Morrison made their move, and Morrison connected with Starship Pain to Scott Dawson for the Super ShowDown-clinching victory. 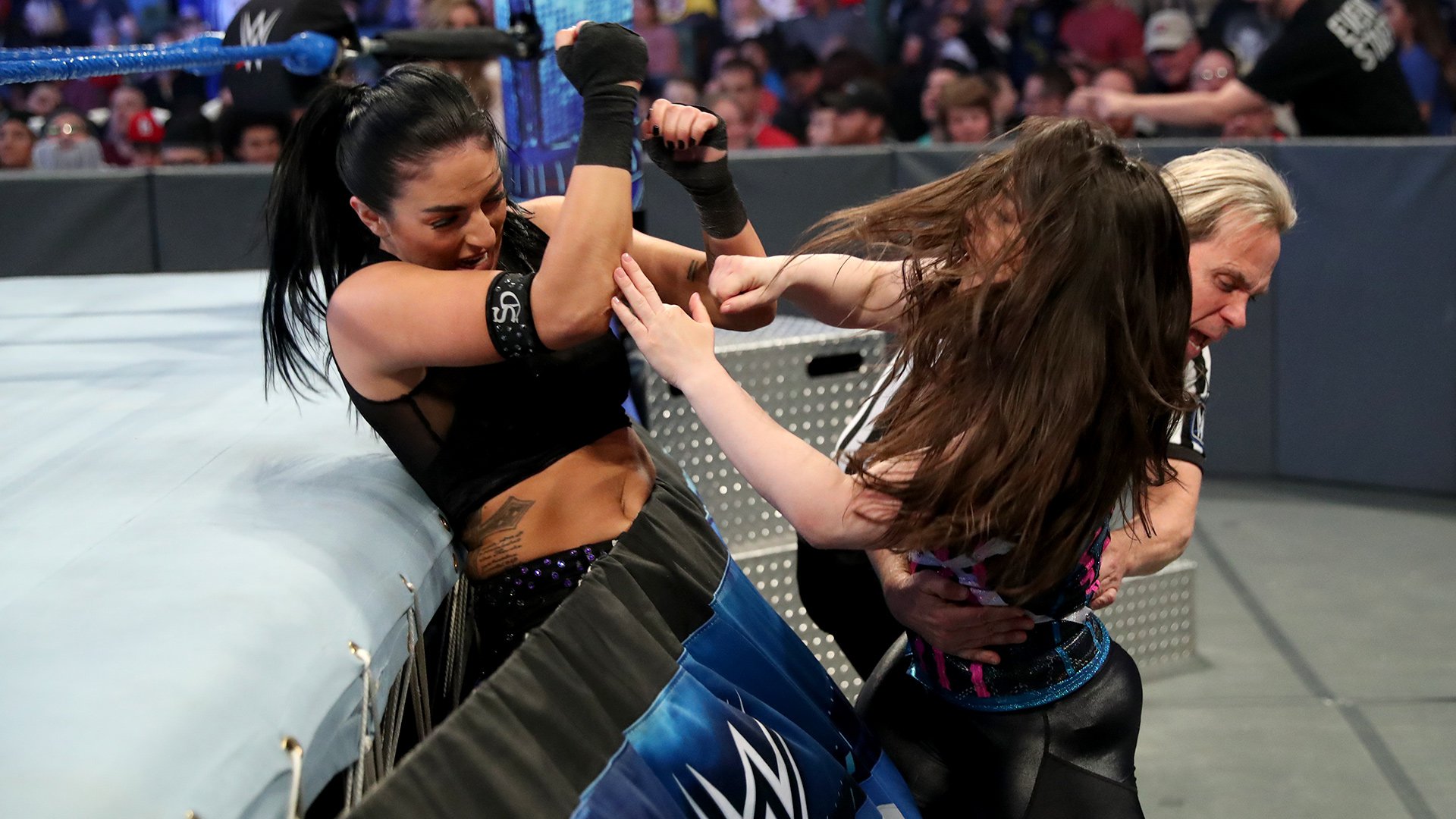 With there being a lot of talk that the winning team could be on the fast track to soon get a WWE Women’s Tag Team Titles Match, both teams came out the gates with intensity. In the clutch, Cross connected with the Swinging Neckbreaker to Rose, and The Goddess finished off God’s Greatest Creation with Twisted Bliss for the win. 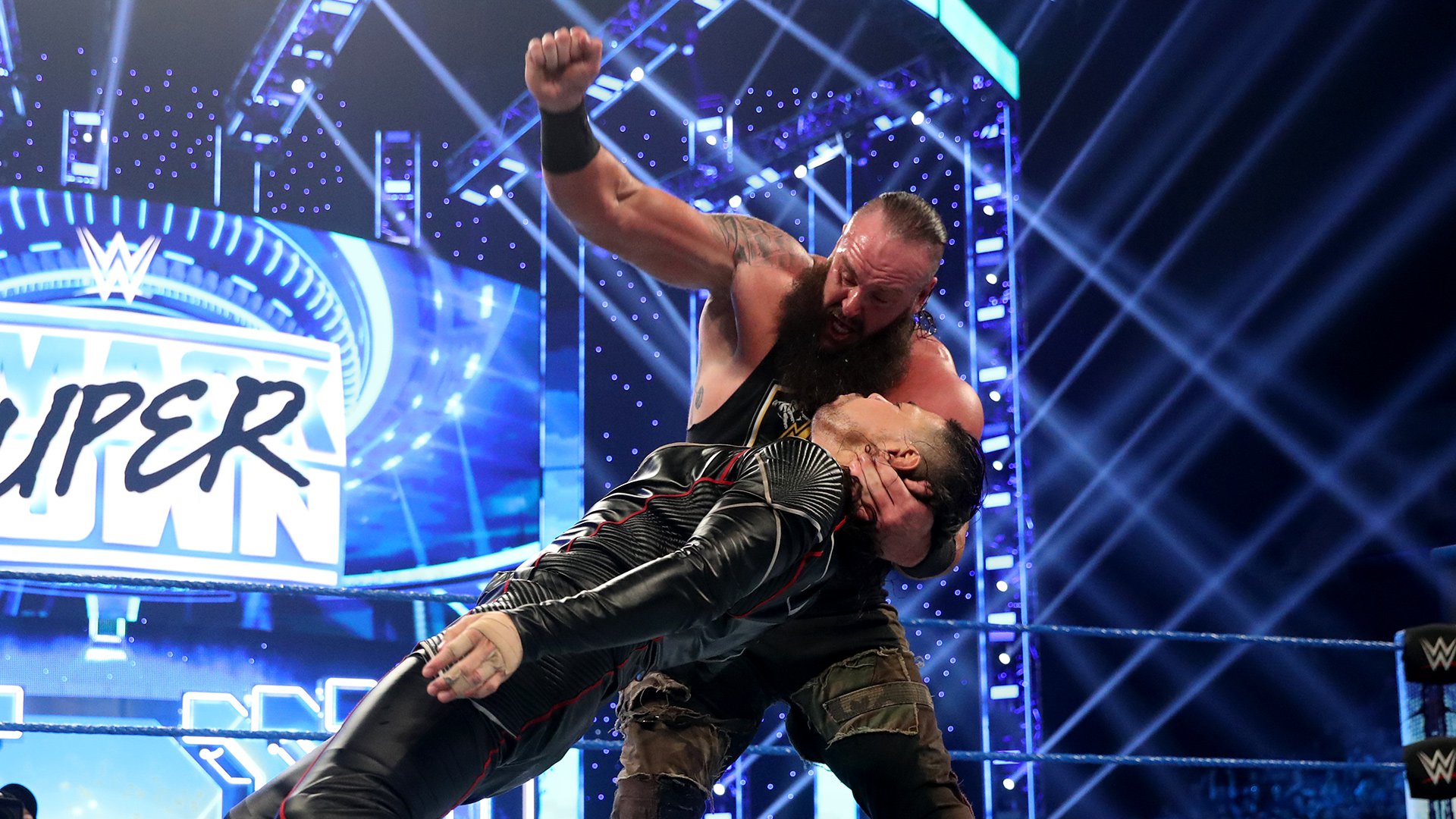 Braun Strowman finally had his one-on-one opportunity to capture the Intercontinental Title from Shinsuke Nakamura here on Super SmackDown… and he didn’t seem keen on wasting it.

Forced to also deal with Sami Zayn and Cesaro at ringside, Strowman fought valiantly to overcome the odds in attempts to capture the first singles championship of his WWE career. The Great Liberator and Swiss Cyborg interfered on a nearly constant basis, setting up The King of Strong Style to attempt to smash Strowman’s head into an exposed turnbuckle, but The Monster Among Men was ready. He blocked the attempt and turned the tides by doing the same to Nakamura before finishing him off with the Running Powerslam to capture the Intercontinental Title!

Zayn attempted to make sense of the defeat during a backstage interview, but he was interrupted by the soothing tones of an Elias performance in the ring. The Great Liberator sent Cesaro out to attempt to silence Elias, but Cesaro found no such luck, with Elias vanquishing the ring of The Swiss Cyborg and any trace of Zayn’s hyperbole.

Sheamus got the leg up on Shorty G this past Sunday at Royal Rumble, which prompted Shorty G to waste no time tonight on Super SmackDown, getting the jump on Sheamus from behind before the contest began.

The attack only proved to anger Sheamus though, and despite Shorty G’s incredible tenacity, The Celtic Warrior withstood Shorty G’s signature moonsault and finished his rival with the Brogue Kick for the emphatic victory.

Naomi made a statement and took down Bayley 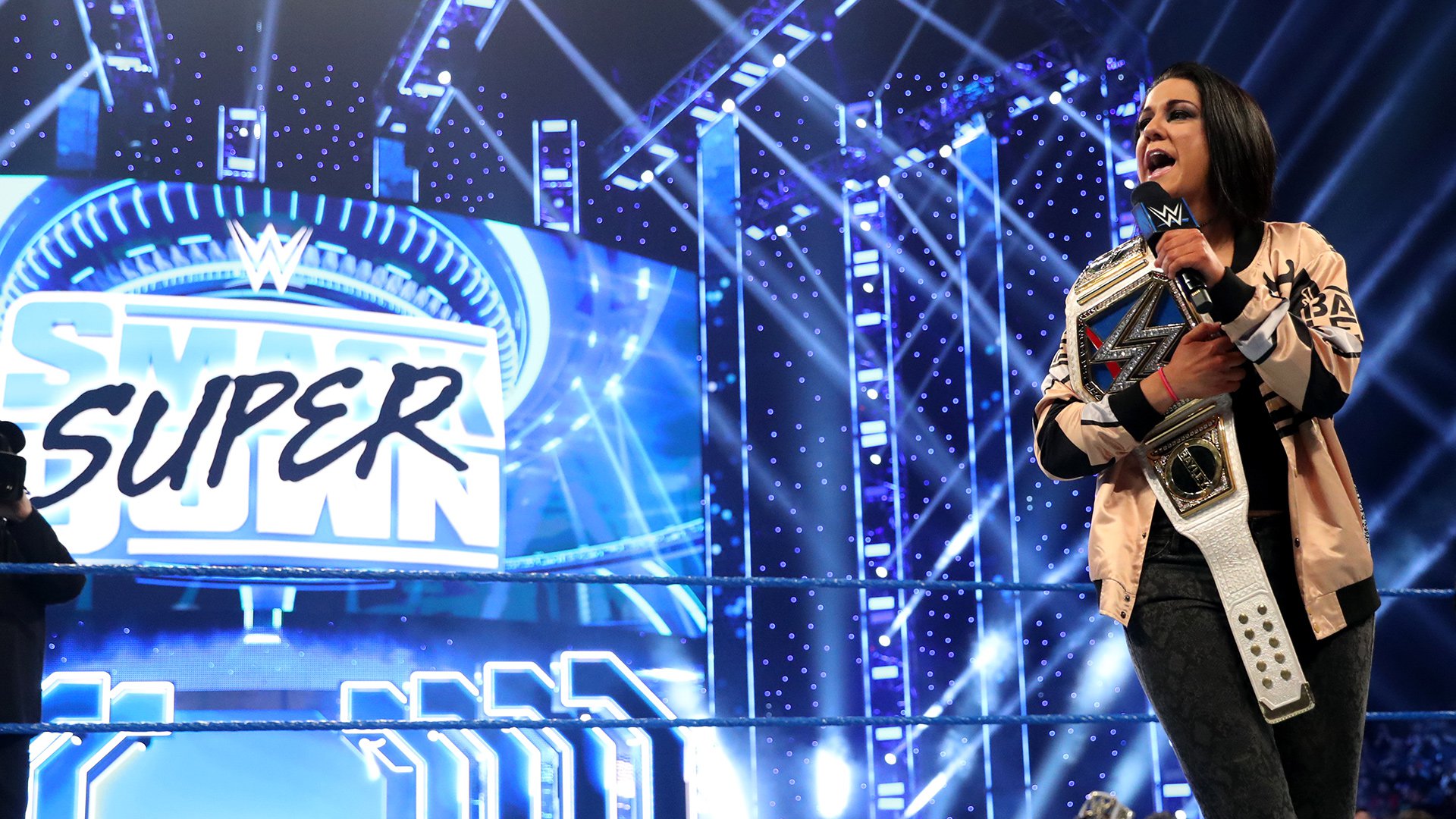 SmackDown Women’s Champion Bayley was ready for her victory lap after defeating Lacey Evans to retain the title at Royal Rumble, but the newly returned Naomi wasn’t with it.

Bayley was waxing poetic about how Women’s Royal Rumble winner Charlotte Flair was inevitably going to choose Bayley as her opponent for WrestleMania, but Naomi took that as her cue to interject. The GLOW shined bright, calling out Bayley for all her bravado and reminding Bayley that she has never defeated Naomi.

However, before Naomi could complete her next sentence, Bayley struck with a sucker punch once it was clear that Naomi was eyeing the SmackDown Women’s Title. Bayley’s upper-hand was short lived though, as Naomi battled back and dropped Bayley to send a message to the champ. 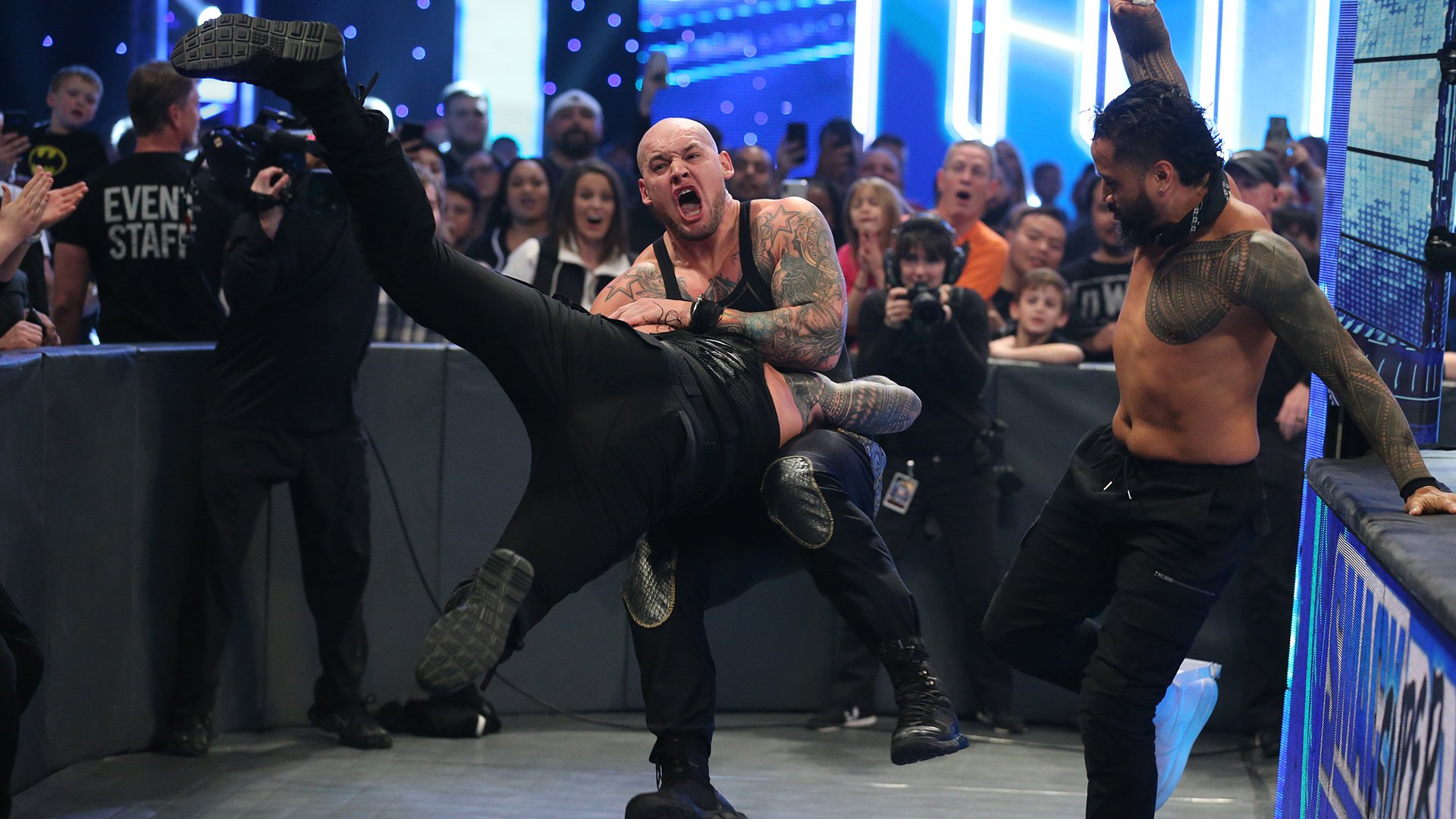 With the penalty of having to eat dog food on the line (you read that correctly), Roman Reigns & The Usos squared off against King Corbin, Dolph Ziggler & Robert Roode in the main event of this special Super SmackDown.

The two sides went at it tooth and nail for the duration of the contest, with neither group wanting to go anywhere near the dog food. Reigns and The Usos weathered Corbin and company’s best, with The Big Dog finally catching Corbin with a rollup for the win.

Following the defeat, The King of the Ring, predictably, attempted to get away, but The Bloodline stopped any such escape, handcuffing Corbin to the ring post (turnabout is fair play) and pouring buckets of dog food onto Corbin before posing for a picture, as King Corbin experienced the most humiliating moment of his career.