Becky previews “heart vs. skill” as Baszler looms in the distance 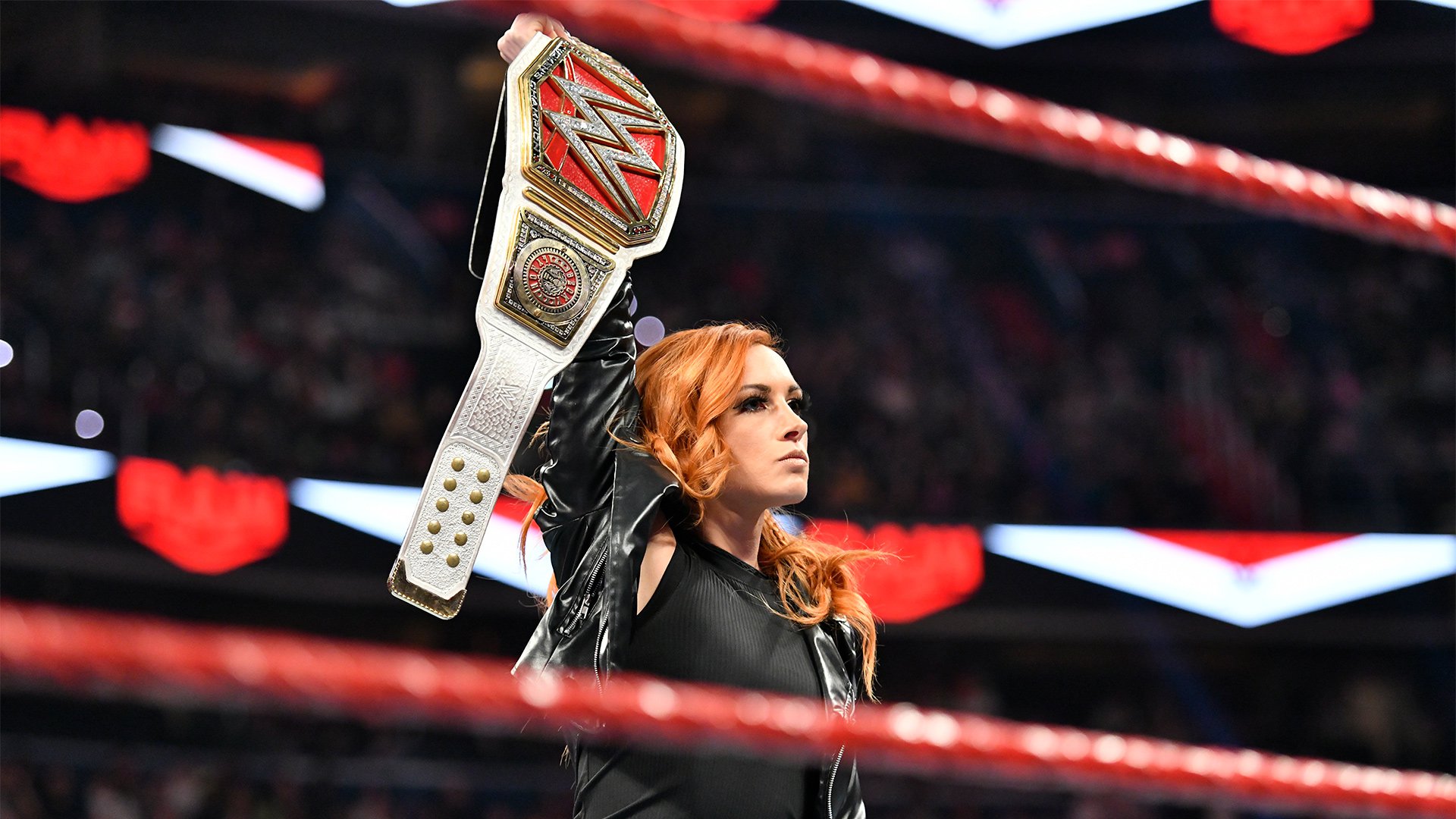 WASHINGTON, D.C. — For weeks, Becky Lynch has been begging the universe to deliver Shayna Baszler as her WrestleMania opponent. The fates have obliged, and The Man is ready to go.

Responding to some fighting words by Baszler in the wake of the Elimination Chamber pay-per-view, Lynch threw some of her trademark insults at The Queen of Spades and christened the WrestleMania match as a battle of “heart vs. skill,” where Baszler would make her move to rewrite history and prove that Becky isn’t the type who beats trained killers. But as Becky said in the kind of retort that will make highlight reels until the sun burns out, “I do, I did, and I will.” Here we go.

Could Mysterio put Garza in his place? 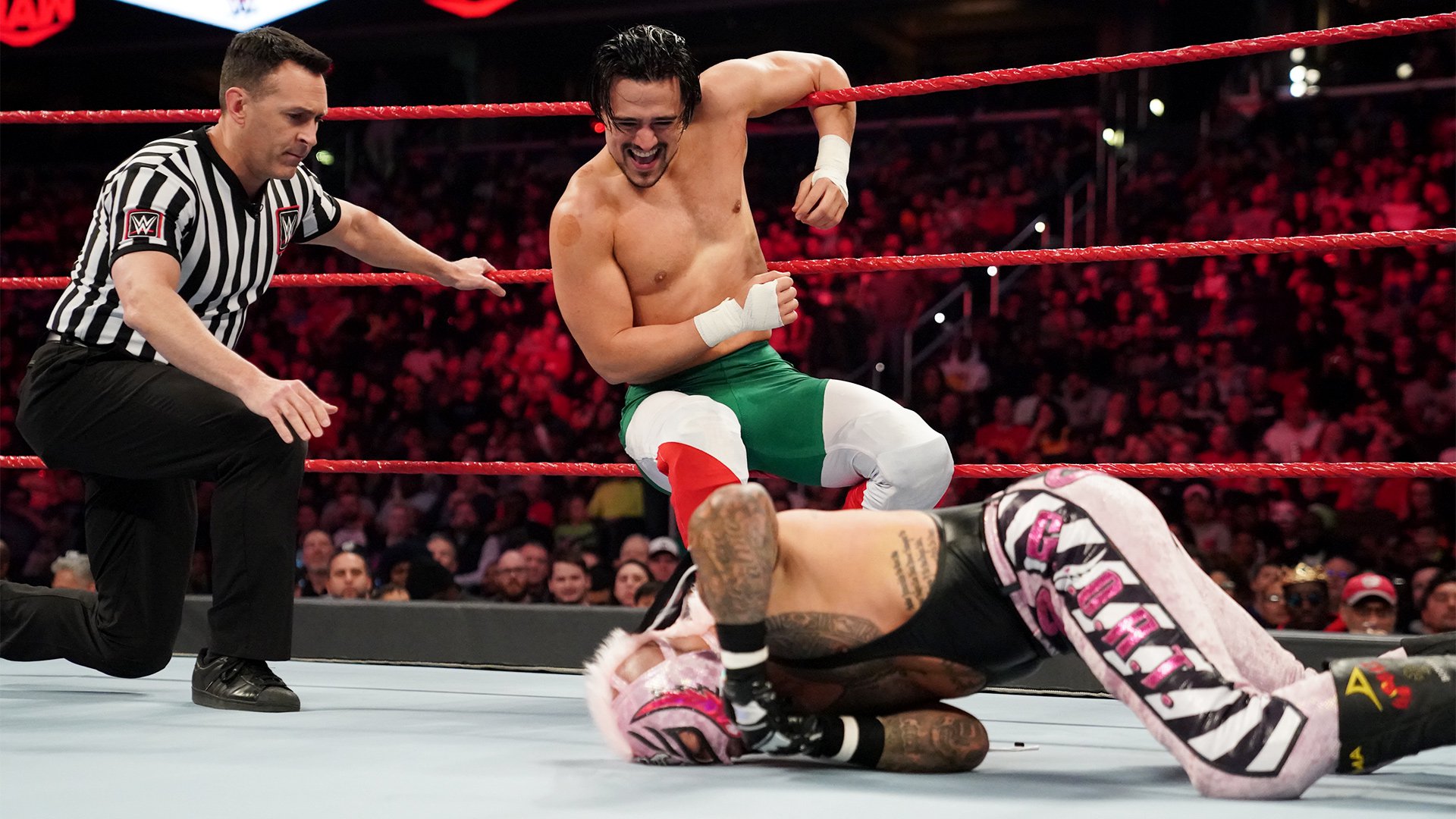 It took a little while longer than expected, but Rey Mysterio got his man. One month after Angel Garza put The Ultimate Underdog out of action with a thunderous DDT on the concrete, Mysterio earned long-awaited retribution by delivering Garza some much-needed humility in the form of a singles loss.

Okay, so maybe not humility. Garza’s self-confidence is … healthy, to put it mildly. But he was certainly outclassed by The Master of the 619, who seemed to take issue with Garza’s attempt to steal the 619 and answered the disrespect with a flurry of offense that put the former NXT Cruiserweight Champion on the defensive. A true 619-Dropping the Dime combo put the match to bed, as Mysterio schooled a Superstar who has all the talent in the world and yet still has much to learn. 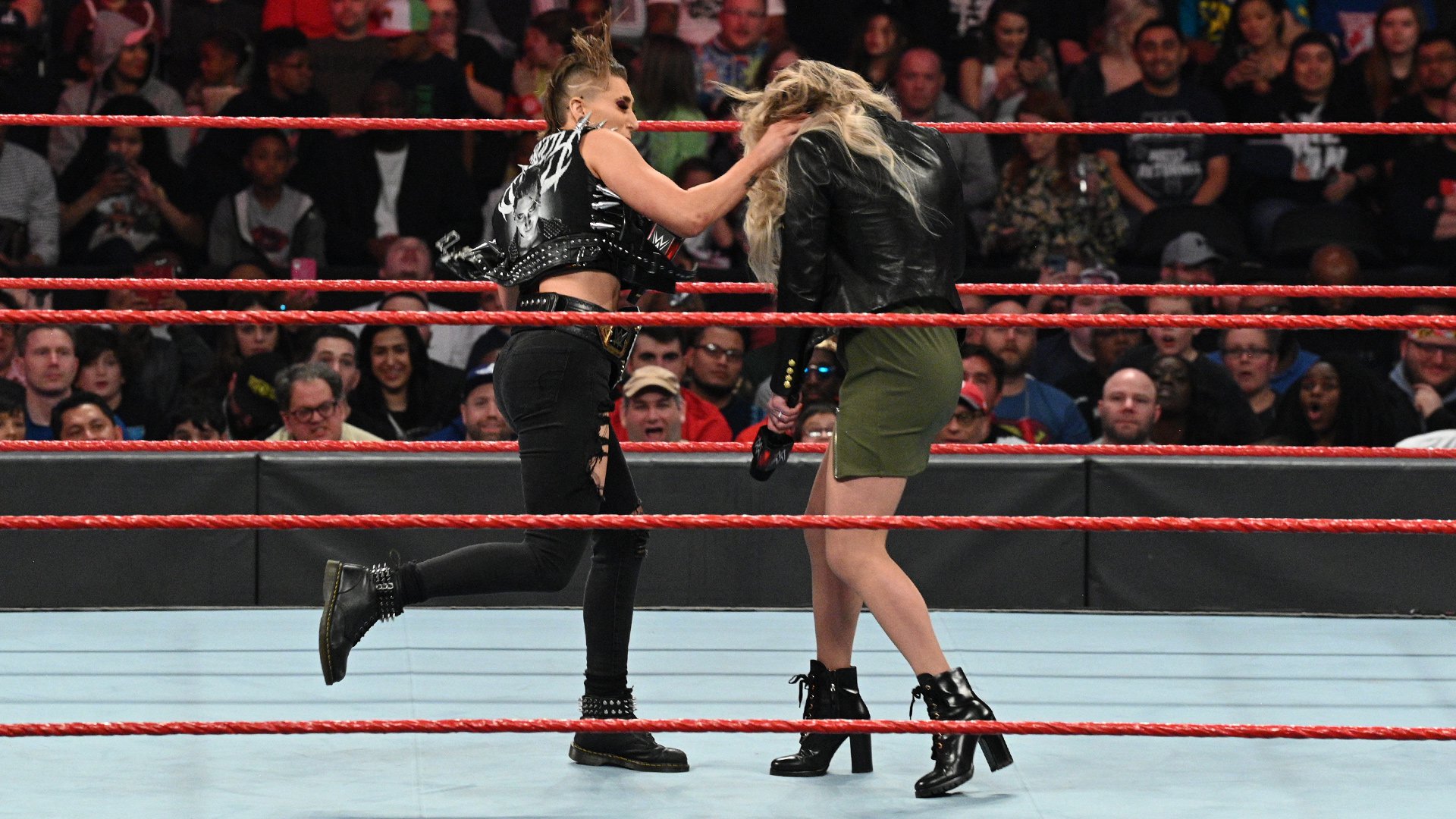 Two weeks ago, Charlotte Flair waltzed into NXT and narrowly avoided throwing hands with Rhea Ripley. This week, the NXT Women’s Champion returned the favor, confronting her WrestleMania challenger on The Queen’s own turf. Unlike last time, the meeting got physical in short order.

Seemingly taking issue with Charlotte’s warning to her — “You are not me, you will never be me, and there is only one of me” — Ripley stepped to Charlotte and attempted to issue a retort before being cut off by the 10-time Women’s Champion. So, Ripley did what any challenger worth her salt would do and smashed Charlotte in the forehead with a right cross. For all their differences, it’s promising that these two seem to be of the same mentality in one aspect: The time for talking is just about over. 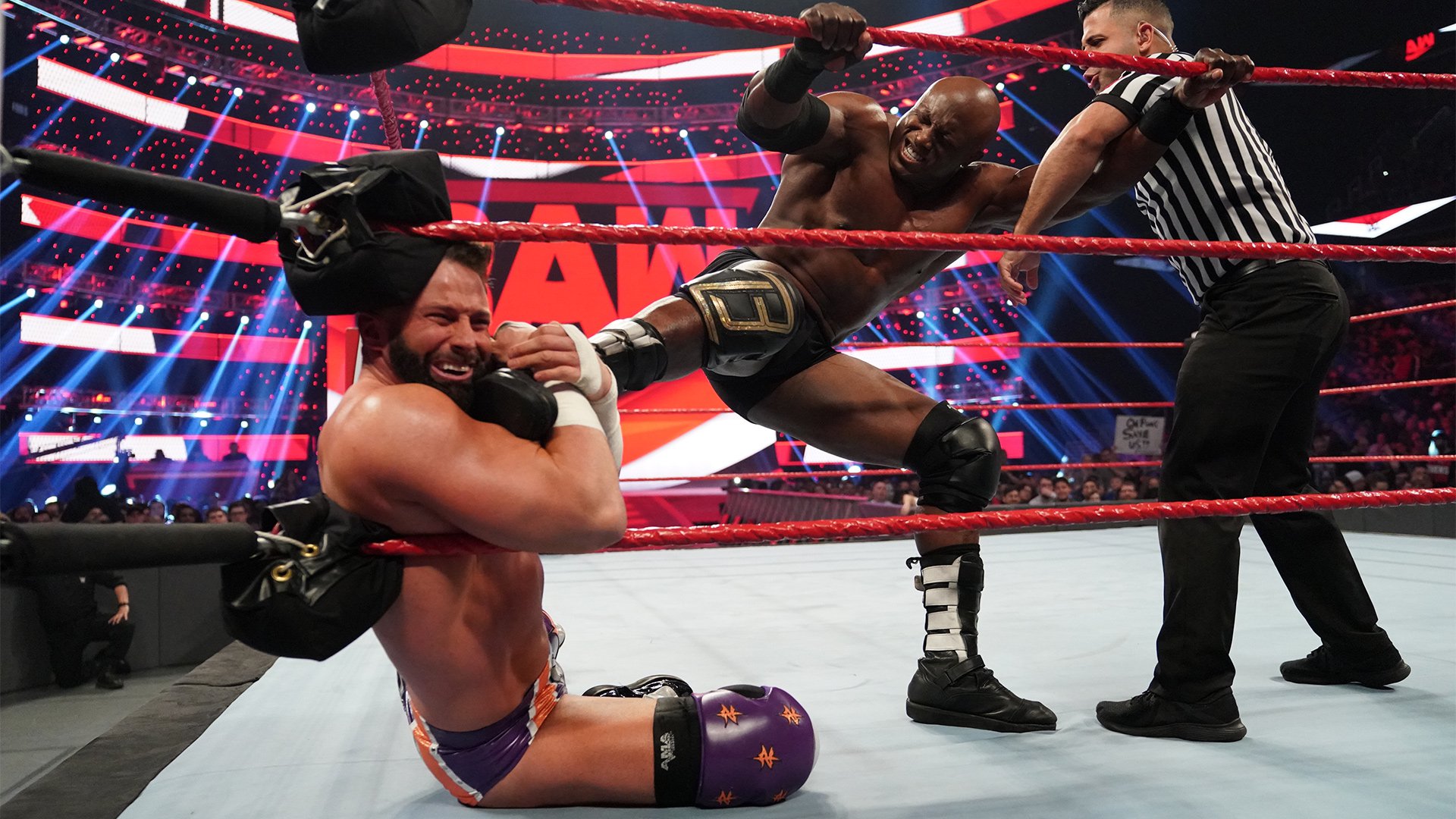 If you’ve been thinking, “Bobby Lashley should be contending for more championships,” Bobby Lashley agrees with you. With Lana off filming a movie, The All Mighty got back to business and back to basics, trouncing Zack Ryder in a matter of minutes in a brutal, physical manifestation of his recent frustrations following a slump of sorts. Jerry “The King” Lawler all but quoted Lashley in saying he’s looking for a title match, so someone give this man what he wants. The well-being of the roster may depend on it.

McIntyre brings down the hammer on Rowan’s cage 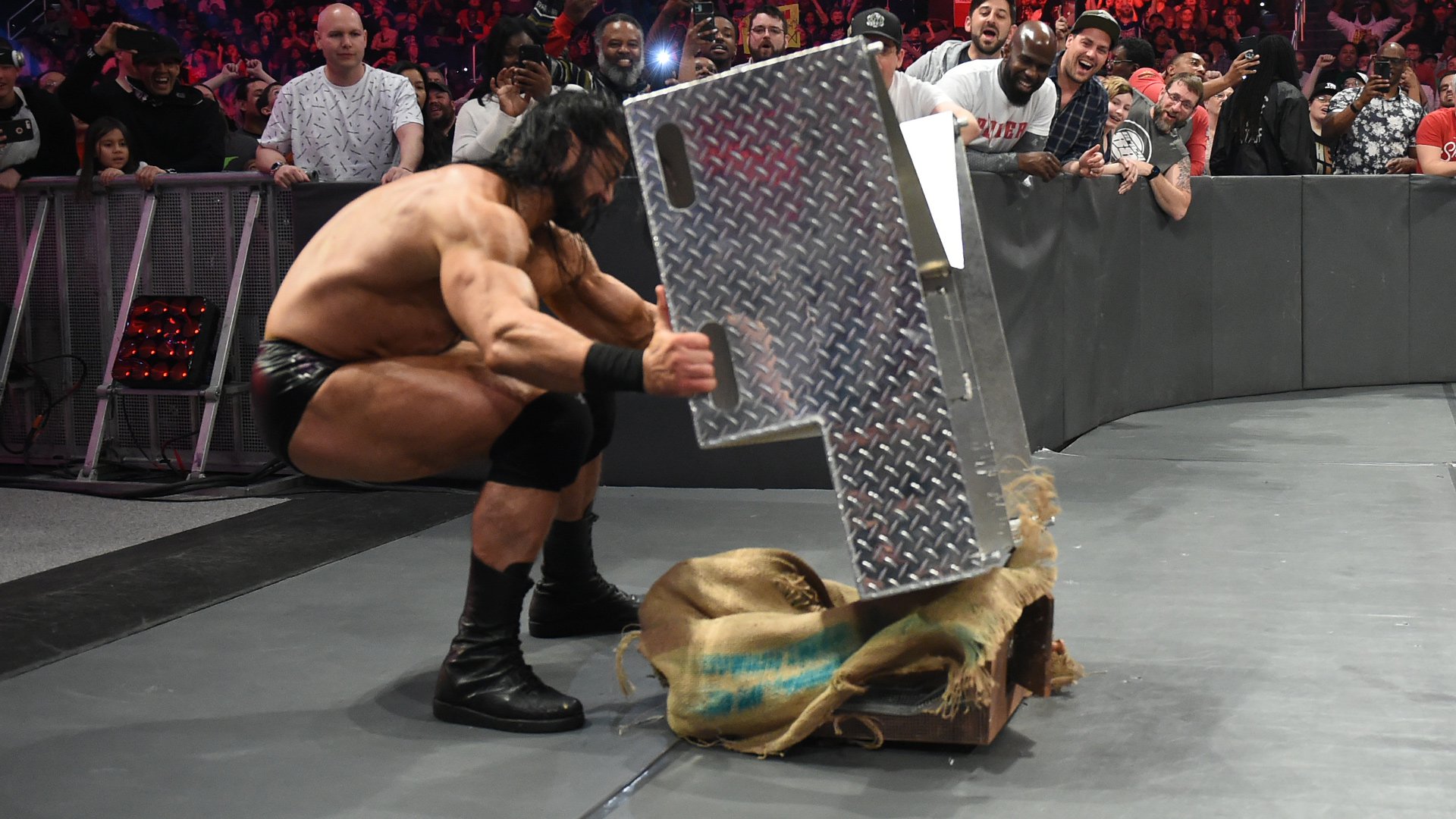 If there’s one thing we’ve all learned, it’s that beating Brock Lesnar is as much a mental game as it is a physical one. Drew McIntyre seems well-suited to the task, following up his unmanning of The Beast with a dagger to the heart of Erick Rowan, destroying that which was most precious to the former SmackDown Tag Team Champion.

Drew destroyed the cage and presumably its contents, crushing the whole lot with the steel steps in the middle of his bout with Rowan. It’s as strong an indication as any that the Scottish Superstar is prepared to cross any and all lines to win the WWE Title. McIntyre claimed the win with a Future Shock DDT and Claymore to the distraught Rowan, and he didn’t seem all that broken up about it, a potential preview for what awaits at WrestleMania: No options left unexplored, nothing off the table, no regrets.

The Kabuki Warriors get back on track 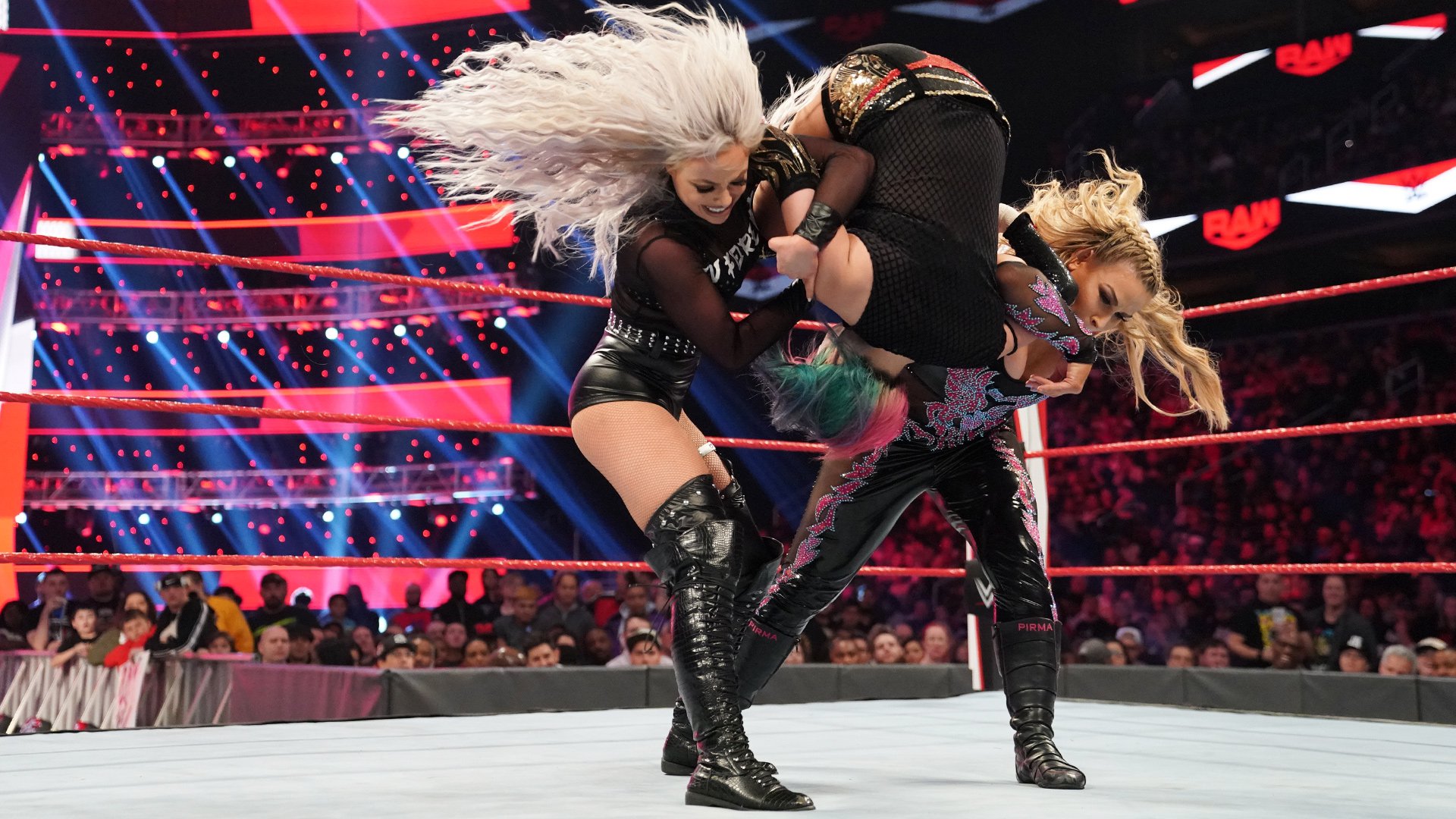 With Becky Lynch and the Elimination Chamber in the rearview, The Kabuki Warriors are back to the business of a Women’s Tag Team division they more or less rule with an iron fist. The impromptu pairing of Natalya & Liv Morgan, while certainly an enticing option on paper, didn’t do much to challenge that dominance.

In fairness, Natalya & Liv were starting at two disadvantages. One, Asuka was raring to beat somebody up (oddly enough, SmackDown’s Alexa Bliss got namechecked here), and a ringside brawl between Ruby Riott and Sarah Logan quickly pulled Liv into the fracas. Still, the result is what matters, and The Kabuki Warriors took advantage of Natalya’s solitude, pinning her after Asuka booted her in the back of the head. Mission accomplished.

AJ Styles lays a challenge to The Undertaker at WrestleMania 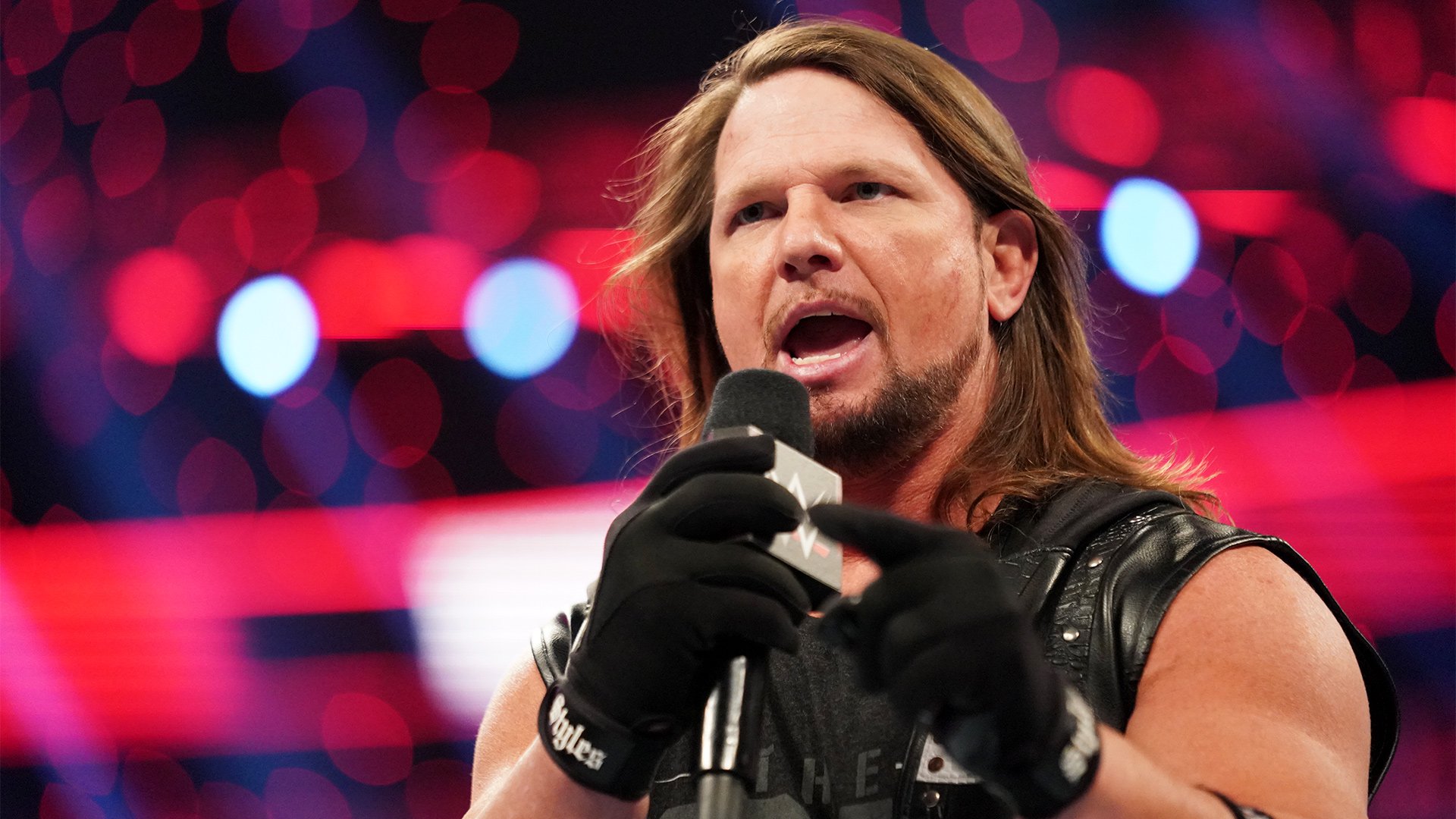 Getting chokeslammed is all well and good, but to AJ Styles, The Undertaker’s recent attacks represent a far greater offense to the man who calls himself the greatest of this or any era: He stole his moment. And so, Styles showed up to Raw with Aleister Black’s footprint still on his face and vowed to take The Deadman’s soul.

In a challenge to The Undertaker that got personal and got personal in a hurry, Styles declared The Undertaker has desecrated a beautiful moment at WrestleMania 33 by continuing to compete for the past three years, implied he was at the beck and call of his “conniving” wife, Michelle McCool, and promised to put the final nail in The Deadman’s coffin by challenging him to a WrestleMania match. The Phenomenal One certainly got his moment this time. For all the good it may well end up doing him. 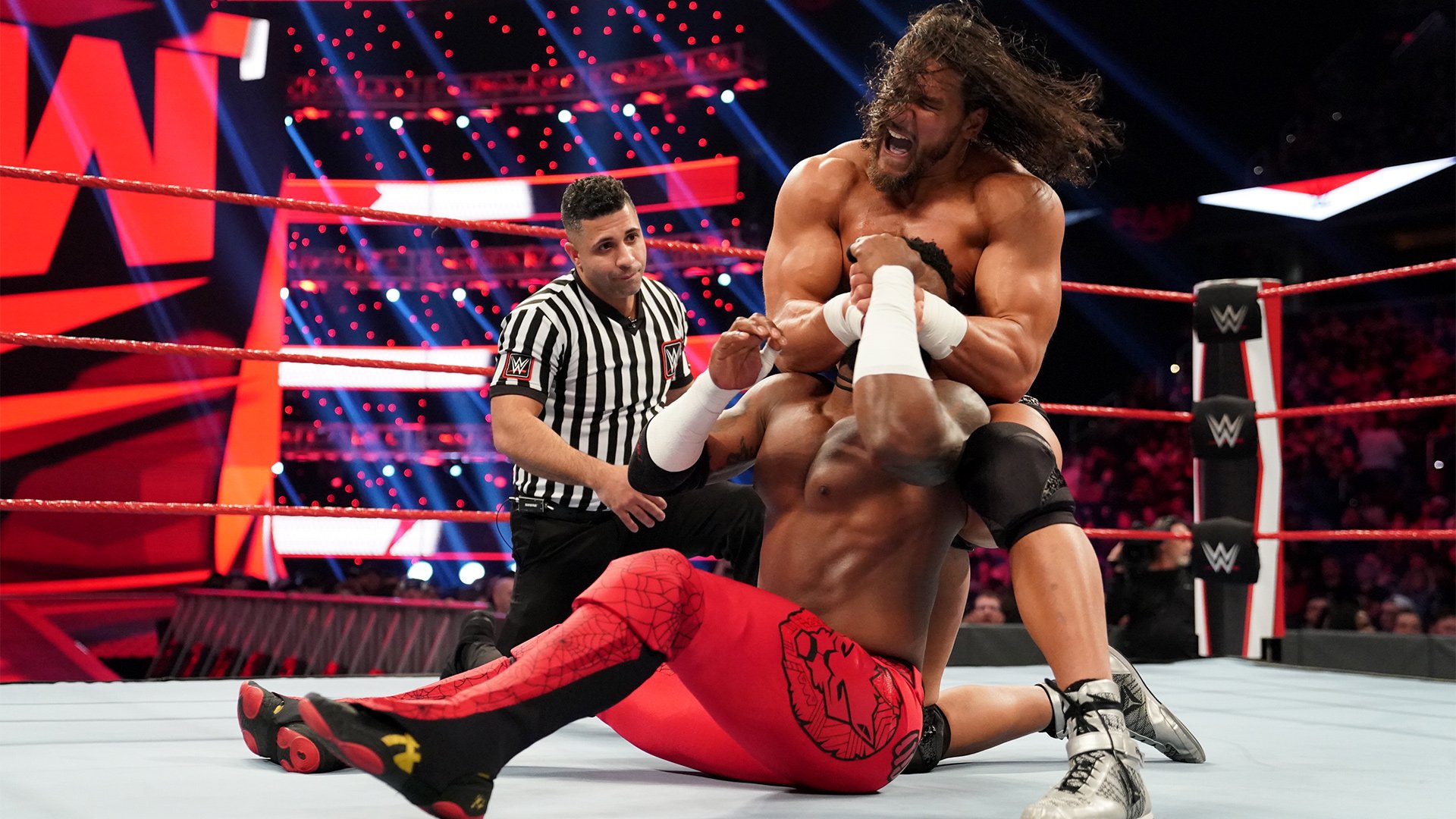 Taking the 24/7 Championship off of Riddick Moss is turning out to be easier said than done. The NXT graduate that came out of nowhere to become the longest-reigning 24/7 Champion in history added another victory to his list by defeating Cedric Alexander, a former champ himself and the second high-flyer to fall to Moss in consecutive weeks.

Alexander seemed primed to make good on Ricochet’s mistakes from last week, but he almost never got out of the blocks. Moss tossed Cedric around the ring with impunity, catching him with that nasty neckbreaker to retain the title. And with several straight-up defenses and retentions under his belt, Moss has steadily rebuilt the reputation of the 24/7 Title, to say nothing of his own. 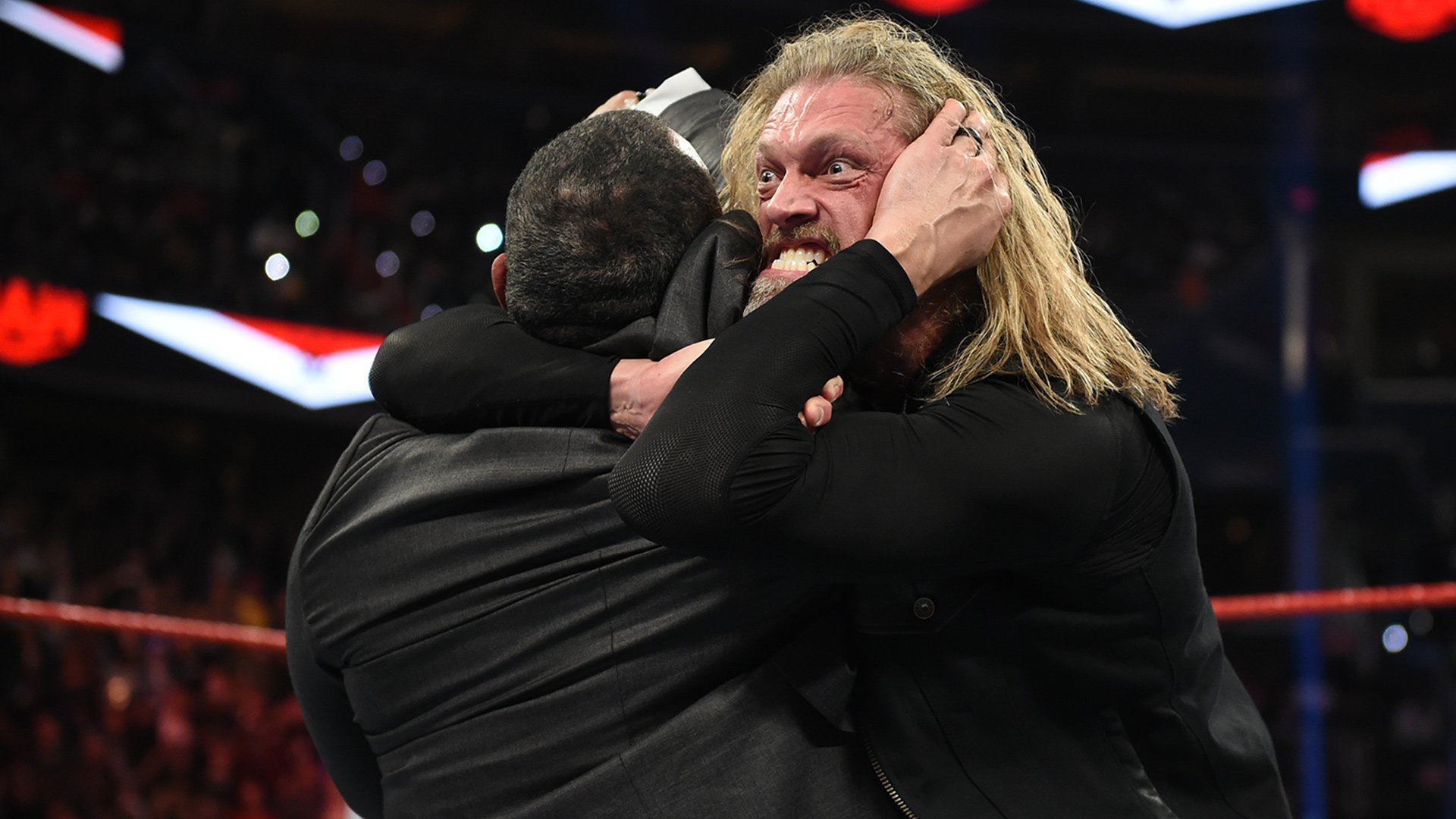 For weeks, Randy Orton’s aggression has been running unchecked, from a Con-Chair-To that put Edge back on the shelf to an RKO to Beth Phoenix. And in The Rated-R Superstar’s first return to Raw since that first attack, he gave The Viper a taste of his own medicine.

In a brief, furious brawl, Edge took down Orton with his own RKO, sending The Viper into a quick retreat. And while Orton evaded further punishment, Montel Vontavious Porter wasn’t so lucky. The would-be manager had offered to mentor Edge and redeem his lack of “focus” before Orton made his move, and Edge used him as an example after The Apex Predator made his retreat. With Orton looking on, Edge subjected MVP to a standing arm triangle, an RKO onto a steel chair, and finally a pair of Con-Chair-Tos before chasing Orton on foot out of the arena. Question his stability if you must — it has certainly been a running theme of Edge’s career — but as far as focus goes, it certainly seems like he knows what he wants. 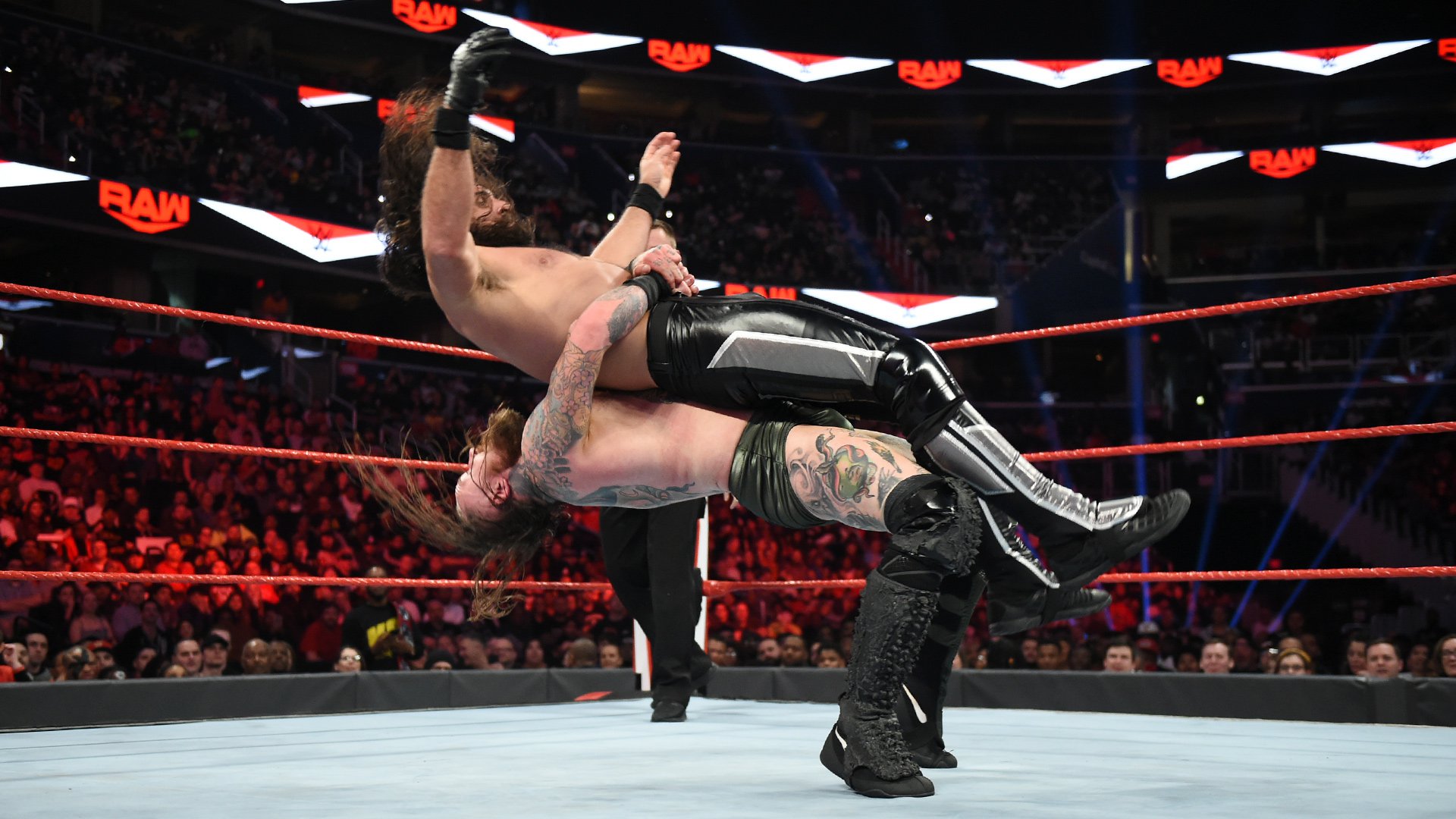 In terms of sales pitches to join Seth Rollins’ flock, the offer to Aleister Black made a certain kind of sense. In the wake of several attacks by The O.C., it would presumably be nice to be on the other side of the numbers game. Unfortunately, the confab led to “fighting words” and a singles match that Black won, albeit in a way that ironically proved Rollins’ point.

The Ominous Man From Amsterdam had Rollins dead to rights when Murphy attacked, breaking up a would-be pinfall and handing Black the win by disqualification. Rollins quickly called in reinforcements in the form of AOP, who dispatched Black just as The Viking Raiders and, finally, The Street Profits arrived to even the odds. And even though The Dutch Destroyer was seemingly out of the running, the Raiders and the Profits had a sales pitch of their own: an Eight-Man Tag Team Match. As ever, Rollins seems to have trouble recruiting allies to his cause, but you have to admire his knack for making enemies. 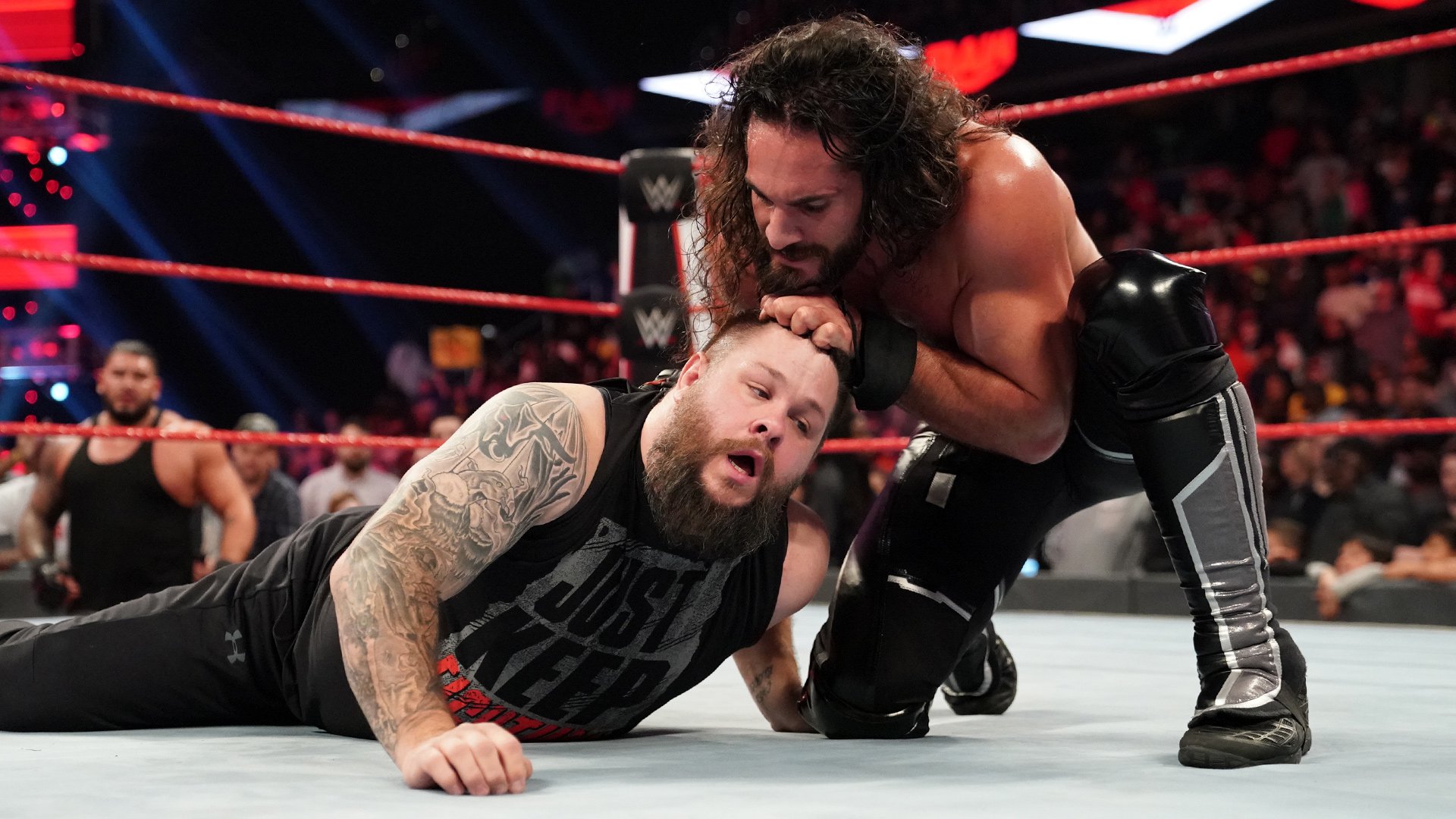 If the mark of a movement is the strength of its resistance, then Seth Rollins might really be onto something. The Monday Night Messiah and his three disciples barely defeated The Street Profits and The Viking Raiders in an Eight-Man Tag Team Match, despite exploiting every loophole and referee distraction that came their way.

Rollins claimed the win by a razor-thin margin with a Stomp on Montez Ford and even got one over on Kevin Owens, who had been mugged by Rollins and his crew earlier and came calling for payback. The Monday Night Messiah caught Owens with a Stomp after KO had Stunned his entire flock, administering two more after the bell to make sure his message was heard. If he can’t convert a soul willingly, there’s clearly always another path.