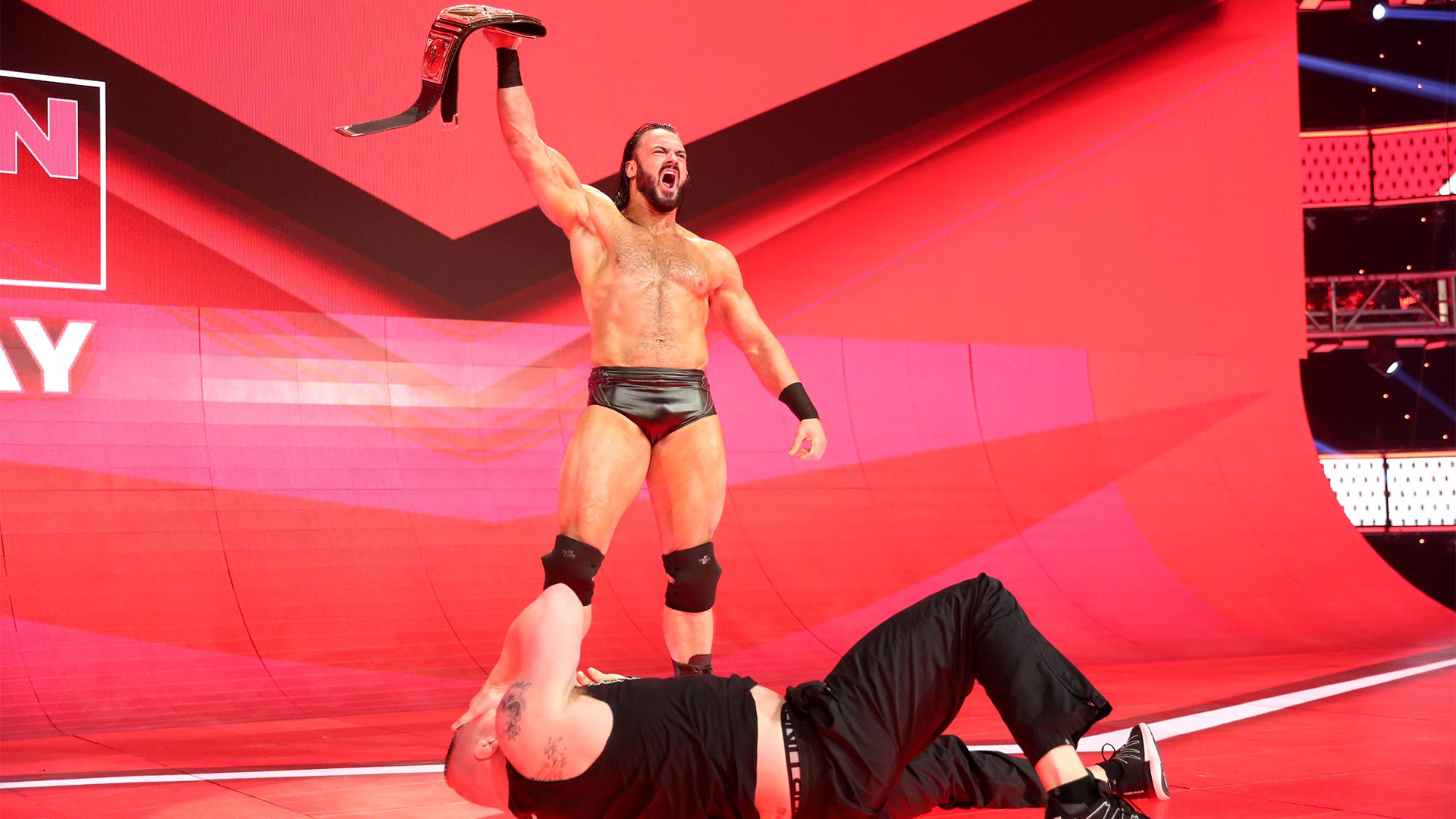 BROOKLYN — According to Paul Heyman, the difference between Brock Lesnar and Drew McIntyre is that the WWE Champion got where he is through an extended campaign of merciless destruction (salute to Ricochet’s gritty but futile campaign for the title), while McIntyre owes his success to an ability to capitalize on single moments of vulnerability. McIntyre didn’t seem to mind, leaning into the strategy during a show-opening confrontation weeks in the making.

After going face-to-face with Lesnar, McIntyre dropped the champion with a Claymore when The Beast attempted to charge him, emphatically poking a hole in Heyman’s slander of the challenger as a “hyped-up fraud.” As if to prove that precision is the name of the game, McIntyre dropped Brock with a second Claymore on the ramp (plus a third at the crowd’s request), signifying a new narrative as WrestleMania approaches. The WWE Title bout is not quite unstoppable force vs. immovable object, but a game of inches, with McIntyre showing more than enough skill to thread the needle. 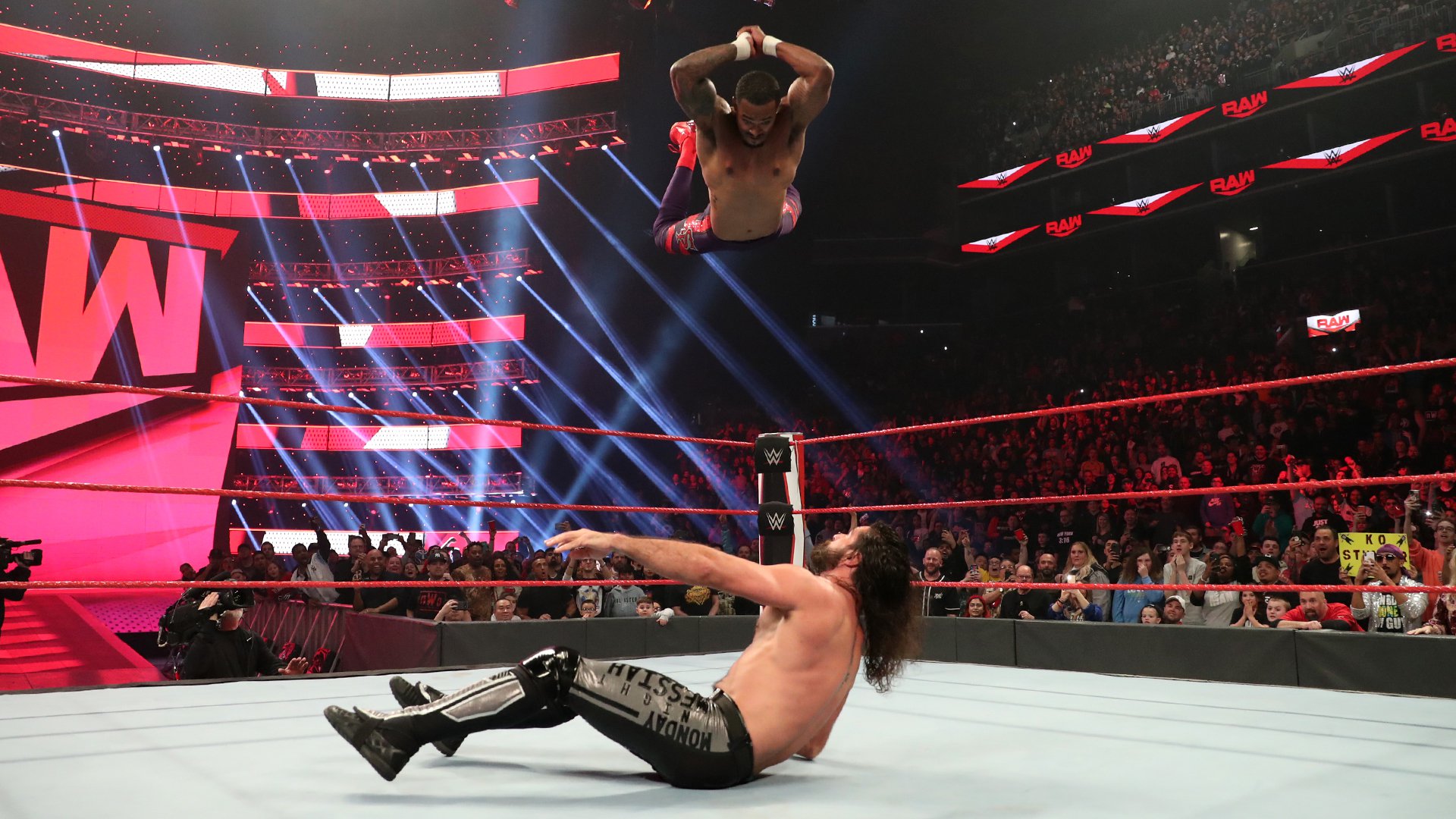 The Street Profits have never lacked a sense of urgency, but there’s something to be said for putting it in fine print. Montez Ford & Angelo Dawkins defeated Seth Rollins & Murphy to win the Raw Tag Team Titles by converting on a crucial “Now or Never” stipulation that would have barred them from future championship matches had they come up short.

Rollins & Murphy certainly had the right idea, stationing AOP atop the ramp to act as an insurance policy/distraction for the referee. But Kevin Owens struck while the ref dealt with Rollins’ minions, Stunning The Monday Night Messiah to tee up a Ford Frog Splash for the pinfall on the solo Rollins. Rollins quickly cried foul and demanded a rematch at Elimination Chamber, but for now, he remains a Messiah without a relic, a preacher whose bully pulpit now looms significantly smaller.

Could Ricochet reverse his fortunes against Riddick Moss? 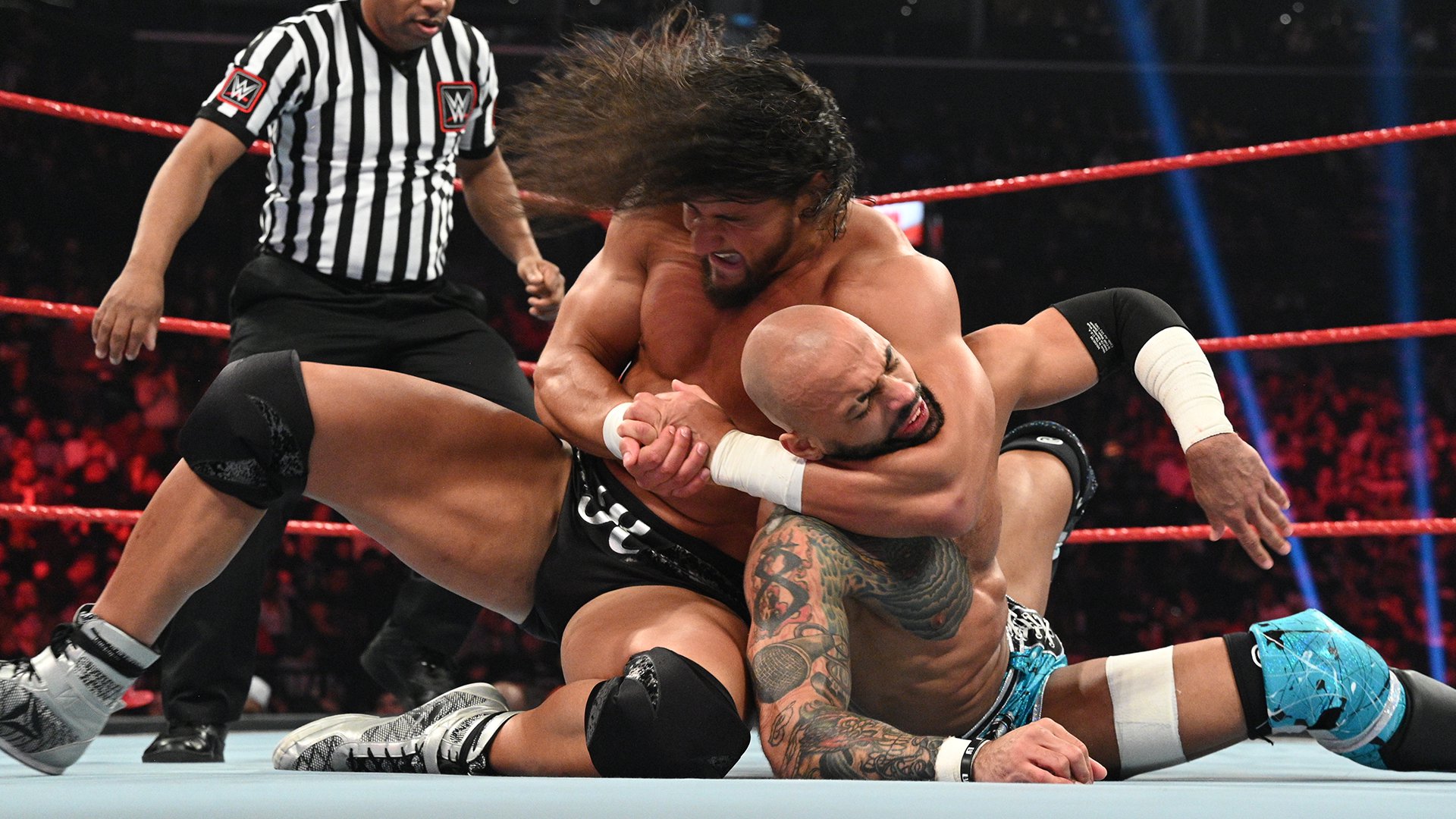 There’s no point in sugarcoating it: Ricochet did not have his best night at WWE Super ShowDown. And while it’s understandable that the former United States Champion would want to reclaim some pride by challenging Riddick Moss for the 24/7 Title, lingering damage from Brock Lesnar’s onslaught left him unable to capitalize against the relatively untested titleholder.

Not only was Ricochet a step slower than usual, but Moss, a former linebacker turned five-tool player, did not hesitate to pick on the hampered highflyer. Moss clubbed Ricochet to the ground with a kind of pop-up forearm and followed up with a unique reverse neckbreaker to end Ricochet’s challenge. The good news, of course, is that this is merely a blip on the radar, and nobody will begrudge Ricochet wanting to change his fortunes — even if seems likely that he was thinking more with his heart than his head.

Styles uses Black to send a message to Undertaker 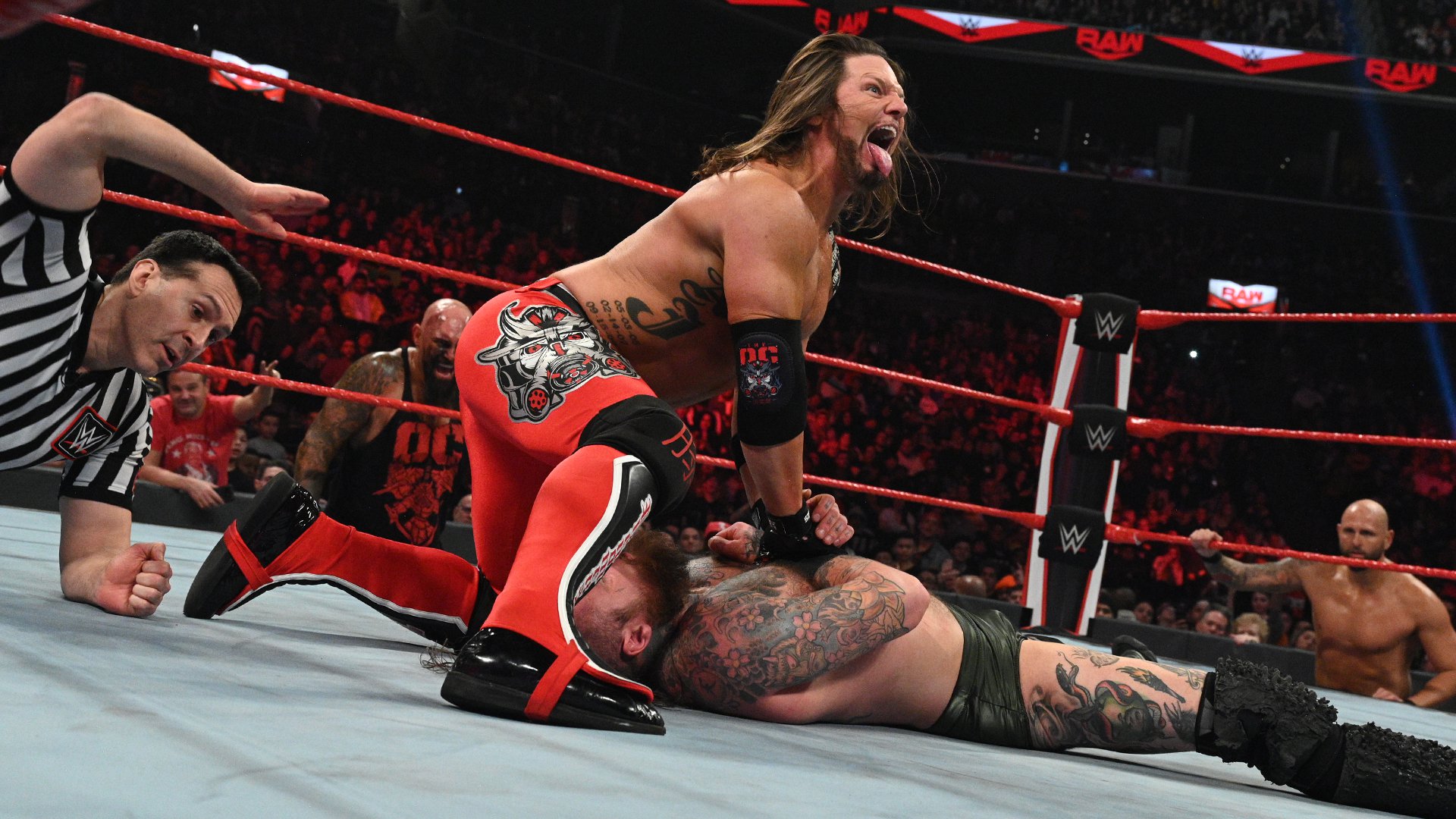 After being trounced by The Undertaker at WWE Super ShowDown, AJ Styles came to Raw with one mission: send a message to the Superstar with whom he acknowledged he’s on a collision course. So, rather than face Aleister Black straight-up as he had been scheduled to do, the two-time WWE Champion instead snuck some fine print into the match contract that forced Black to take on Karl Anderson and Luke Gallows in a pair of one-on-one matches before getting to Styles.

The strategy definitely worked. After Black pinned Anderson,  Gallows got himself disqualified by clobbering Black off his feet. Styles finished the job with a Phenomenal Forearm, pinning a depleted Black with The Deadman’s signature rest-in-peace cover. And for Undertaker (to say nothing of Black), the message was clear. When one picks a fight with AJ Styles, one does not necessarily end it on their own terms.

Liv, Ruby and Logan come to blows on Raw 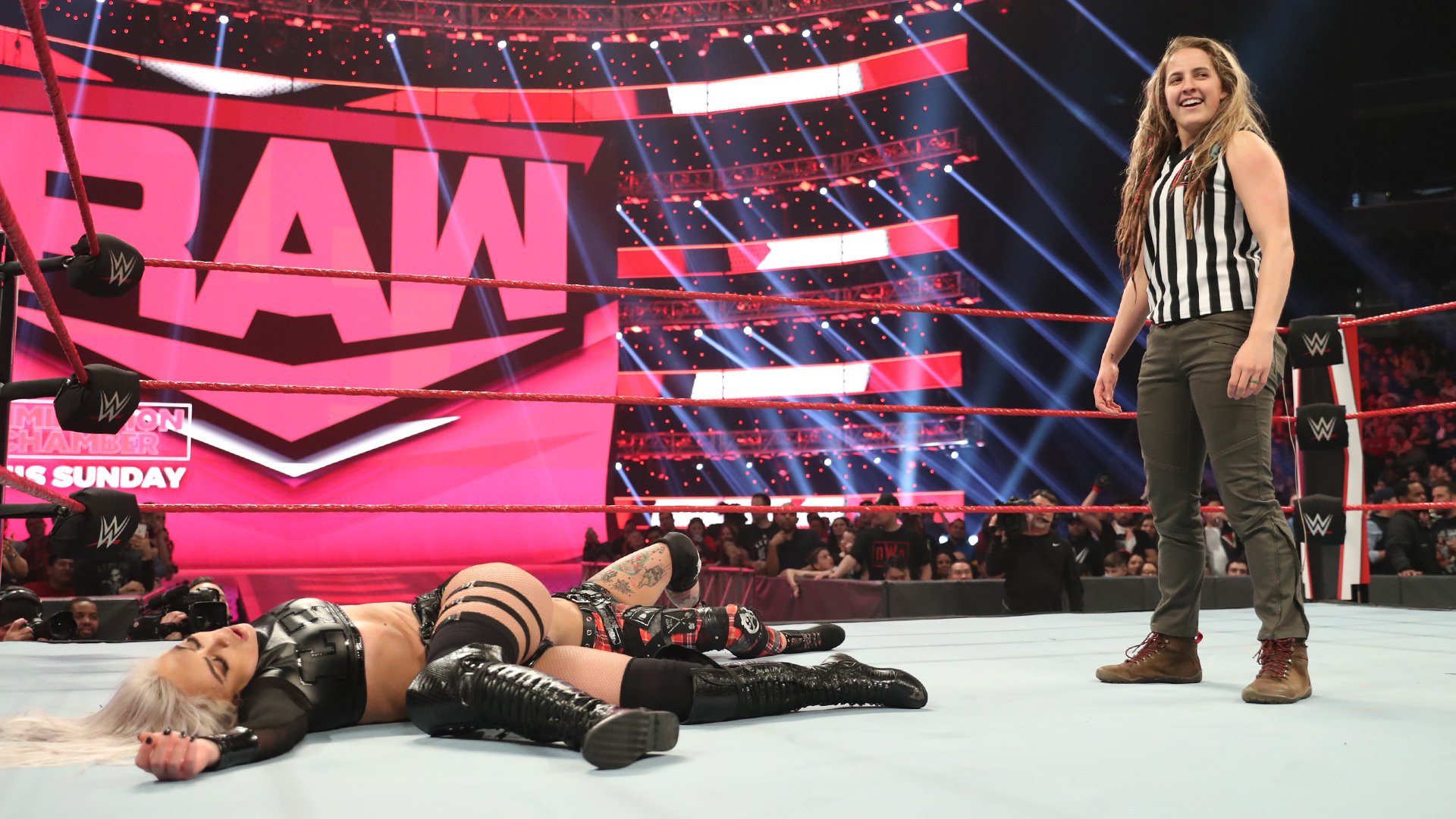 This time last year, The Riott Squad was a cohesive unit, and all three members were challenging for titles at WWE Elimination Chamber. This Sunday, they’re enemies, all challenging for a WrestleMania opportunity inside the Chamber. And of the three of them, it seems like Liv Morgan might be the one best suited to seize the moment.

Given Ruby Riott’s status as the group’s ringleader, that’s somewhat surprising, but give Sarah Logan credit for potentially tipping the scales. The third Riott Squad member served as guest ref and counted a pinfall that was conspicuously fast following a confrontation with Ruby during the match. That isn’t to say Logan was making nice with Morgan, however: All three Superstars traded blows after the match, and Logan emerged as the last Superstar standing in what has become a crystal clear scenario of every woman for herself. The Squad is gone.

Rowan finally revealed the contents of his cage 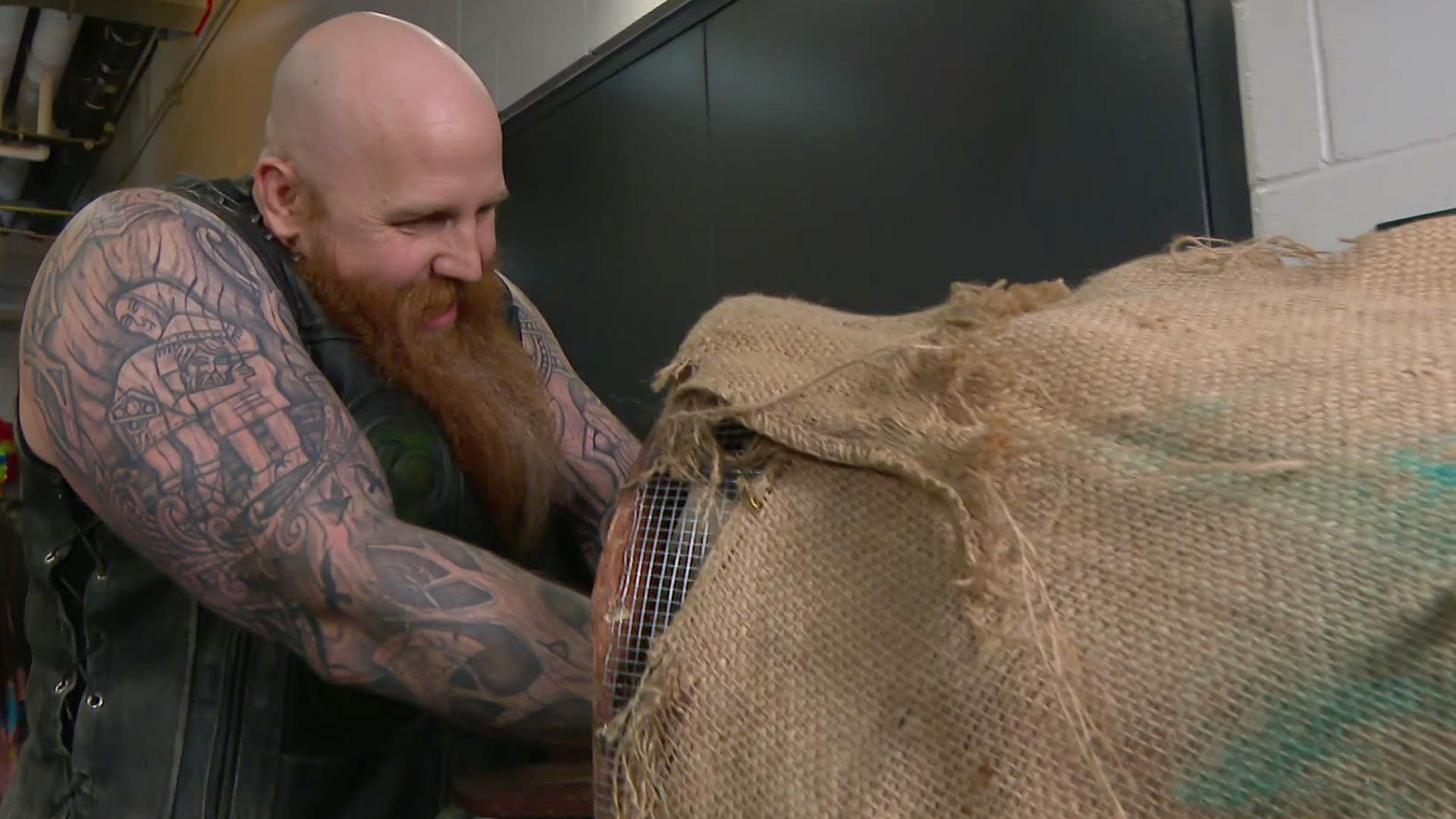 For months, local competitors and Superstars alike have been trying to sneak a peek at what Erick Rowan is hiding inside of his cage. And of all people to crack the code, it was No Way Jose politely asking to see what’s inside. Surprisingly, the former SmackDown Tag Team Champion obliged, giving him — and us — the first clear glimpse of his “friend.”

As it turns out, the thing Rowan has been carrying around is a gigantic, grey tarantula the size of his head, the sight of which sent Jose and his conga line scurrying for cover. Understandably so, though Rowan seemed completely unfazed by the spider, petting it gently as he put it back in the cage. Now, the mystery has been answered. Consider it another reason to give Rowan a wide, wide berth. 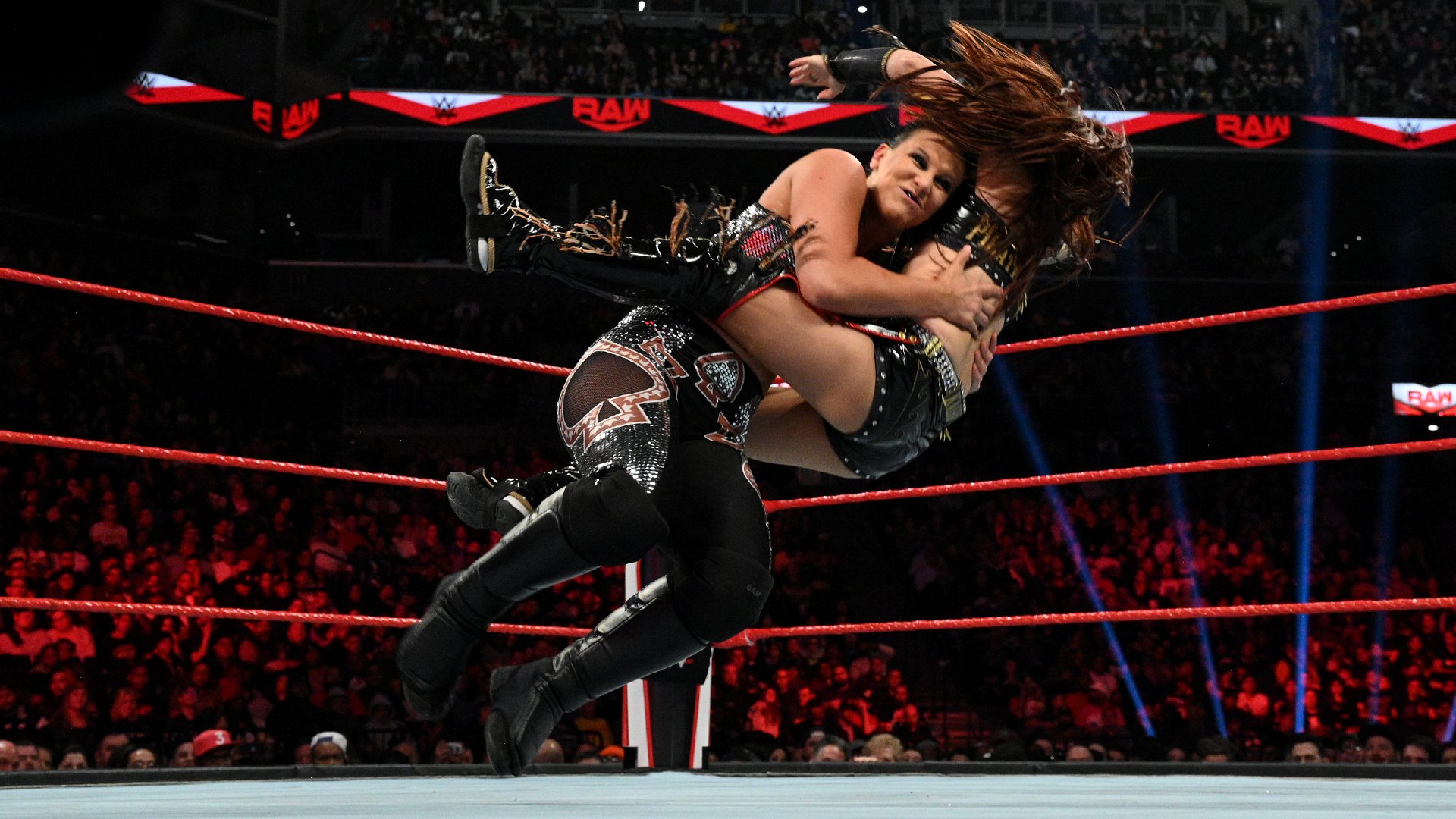 Between her savage attacks and swaggering mystique, Shayna Baszler is looking like the odds-on the favorite in the Women’s Elimination Chamber Match. Even though The Queen of Spades couldn’t mix it up with the injured Asuka on Raw, her bout against Kairi Sane served as a frightening example of what the two-time NXT Women’s Champion is capable of even when she’s not taking a literal bite out of the competition.

Defeating Sane is theoretically no cakewalk for Baszler. The two had a series of classics over the NXT Women’s Title in 2018, but The Submission Magician was on another level in her Team Red debut, dismantling The Pirate Princess piece by piece before submitting her with the Kirifuda Clutch. Raw Women’s Champion Becky Lynch, however, wasn’t overly impressed, chiding Baszler from the commentary desk for refusing to fight her head-on. Based on tonight, she might want to count that as a blessing. 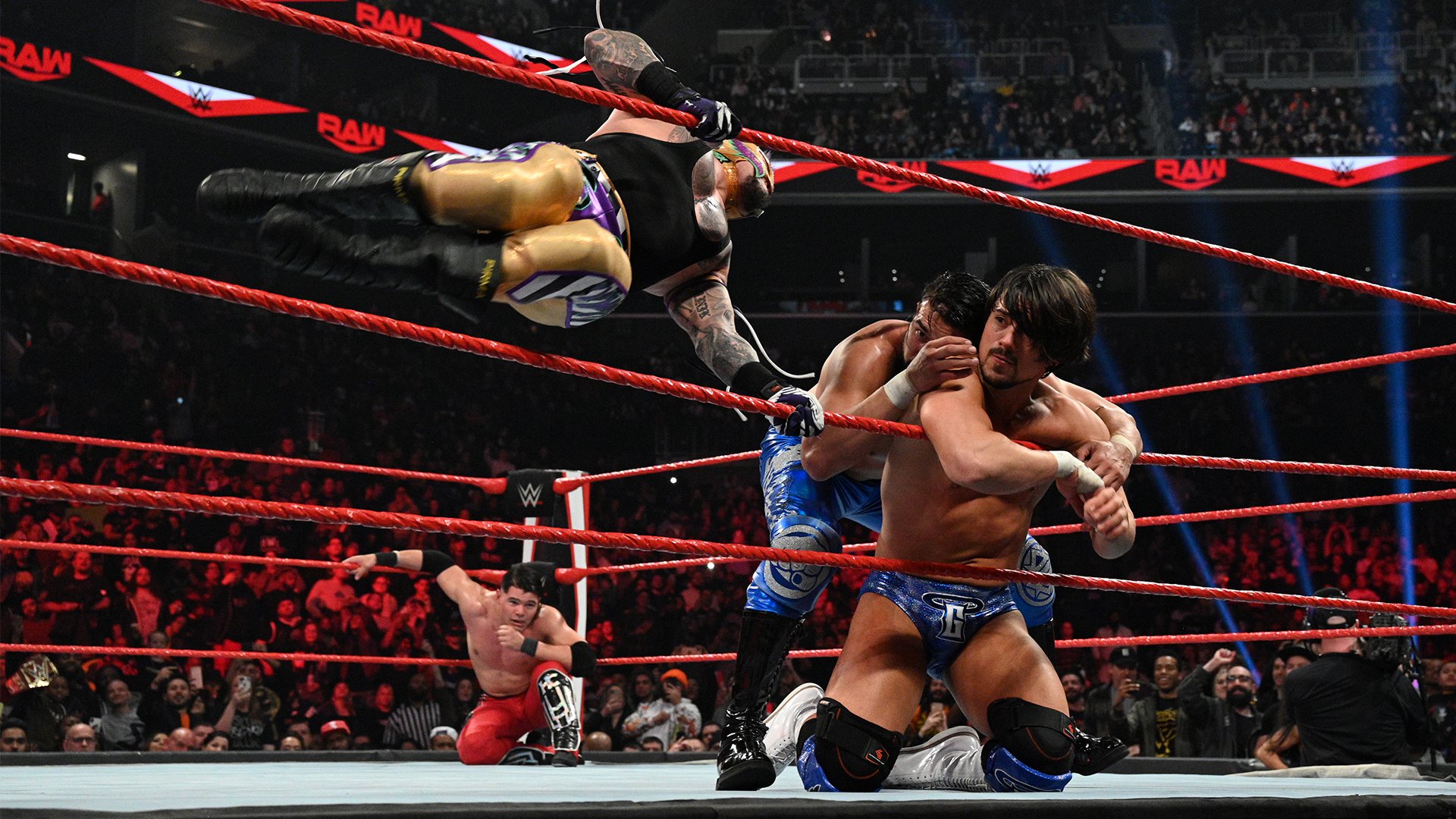 It’s a wonder what the right partner can do. After weeks of coming up short to Andrade and Angel Garza, Humberto Carrillo finally got one over on Zelina Vega’s dastardly clients thanks in large part to the help of his tag team partner for the night, Rey Mysterio.

Mysterio & Carrillo’s chemistry couldn’t be overstated, and neither could Andrade & Garza’s. But Mysterio (who has his own beef with Zelina’s boys) provided a crucial assist, hitting both opponents with a 619. While Rey dispatched a stunned Garza on the outside, Humberto finished off Andrade, swooping down on the United States Champion with a soaring moonsault. Carrillo didn’t hold back on the celebrating, either; he marked the win with a joyful scream atop the turnbuckle, the mark of a man who has gotten over the hump and may finally — finally — be ready for the next step. 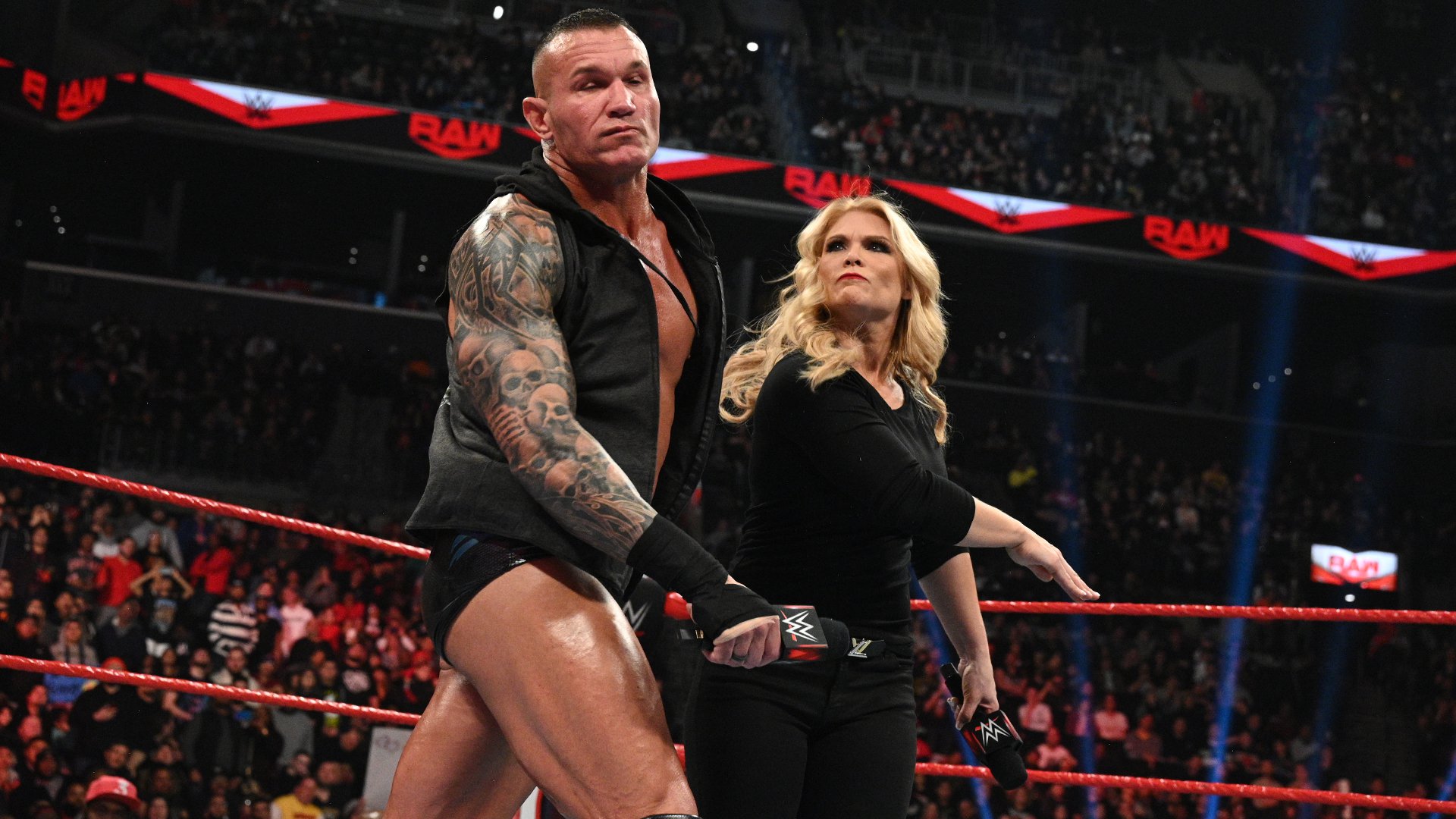 Beth Phoenix came to Raw to provide a medical update on her husband Edge. Instead, she managed to do what no one else could and get Randy Orton to explain why he attacked The Rated-R Superstar during a confrontation that got intensely personal and culminated in a quick-strike RKO to the former Women’s Champion.

As to the long-awaited why, The Viper justified his attack as a return of a long-unpaid favor. Edge saved Orton from himself once upon a time, and Orton reasoned that his old friend’s pursuit of an in-ring return could put him in the path of even greater danger that would take him away from his wife and daughters. Beth, he said, was the real villain here, labeling her an “enabler” who refused to recognize that Edge was a “junkie” for the roar of the crowd, and it was Orton who did the hard thing and took away his supply.

That might have been understandable enough, in a twisted sort of way, but The Apex Predator’s final turn of the knife made it even more personal, when he implied that his love for Edge and his daughters was more than Beth could ever muster. The Glamazon answered with a slap to the face followed by a swift kick to the gut, and Orton retaliated with an RKO before walking out without a word. Several of Beth and Edge’s old friends rallied to Phoenix’s side. Beth became the latest member of Edge’s family to fall victim to Randy Orton’s “love,” though it’s hard to imagine how this action could have possibly saved anyone. If anything, it’s just made things worse.