The World’s Largest Athlete and WWE Champion Brock Lesnar returned, multiple Superstars declared for the Royal Rumble Match and more on the first Raw of 2020. 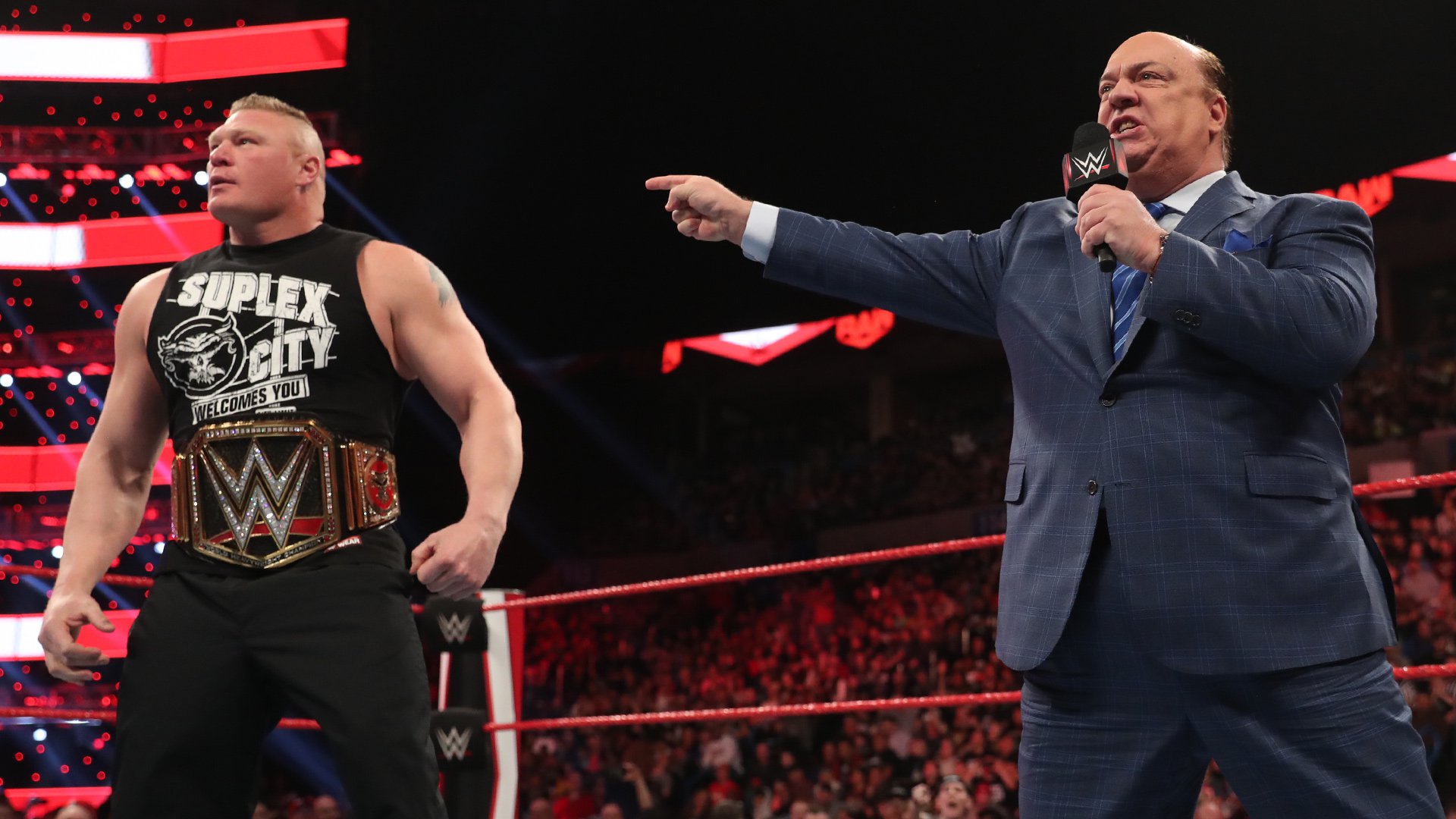 OKLAHOMA CITY — It’s a new decade, but Brock Lesnar is still making history. Under the pretense that nobody on the current roster is worthy of challenging The Beast for the WWE Championship at the Royal Rumble event, Lesnar opted to declare for the Men’s Rumble Match at No. 1, setting himself up for a feat that no reigning WWE Champion has achieved, from a position no WWE Champion has voluntarily taken.

More to the point, Paul Heyman’s announcement that his client would be taking the dreaded No. 1 slot ensures Lesnar will have to run through the entire roster to get that elusive victory. The good news there is that anybody who wanted a piece of Lesnar at the pay-per-view will get it after all. The bad news is that it gives The Beast all the more chance to knock them down, one by one, en route to immortality. 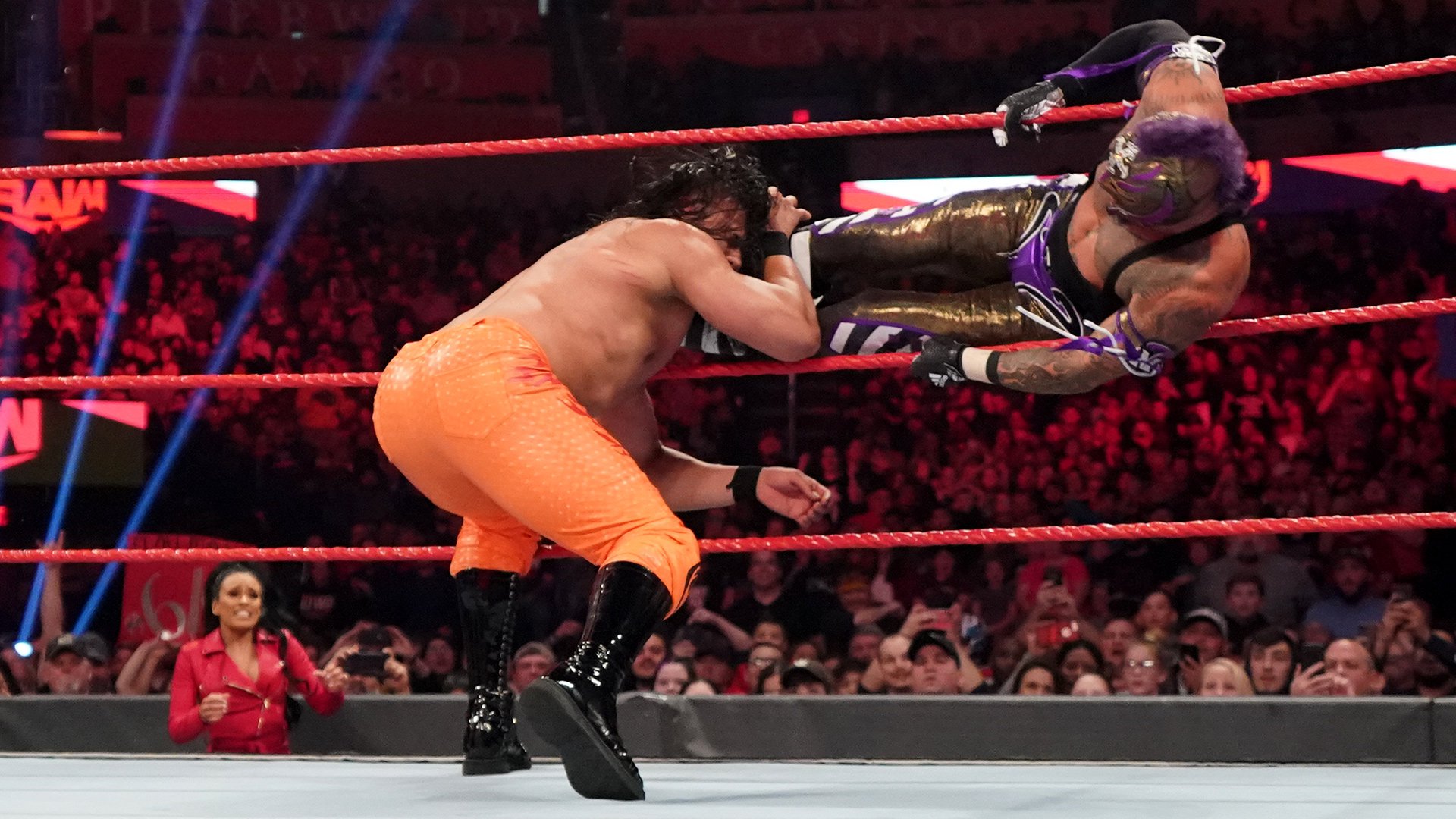 For Rey Mysterio, his bout with Andrade was about reclaiming his United States Title, his own personal pride and his position as the preeminent Latino representative of the WWE Universe. He’ll have to settle for two out of three. Rey certainly reaffirmed his legend status and fought the good fight against his rival, but thanks to some dirty pool from Andrade and Zelina Vega, The Ultimate Underdog was narrowly swindled out of the title.

La Muñeca threw herself into the proceedings when Mysterio scored what would have been a match-ending pinfall by placing Andrade’s foot on the ropes to nullify the victory and force a restart of the bout. She again came into play when she caught some inadvertent contact from Mysterio during a ringside scrap, a collision that left the masked Superstar visibly distraught. Andrade capitalized anyway, hitting Mysterio with the Hammerlock DDT to win the match. He took a trophy with him, too, seizing Mysterio’s mask and presenting it to Zelina, forcing WWE officials to shield Rey with a towel … at least until Rey ambushed Andrade during an interview later in the show, taking his mask back by force and leaving the champ down. Title or no title, it looks like this rivalry is just beginning. Again. 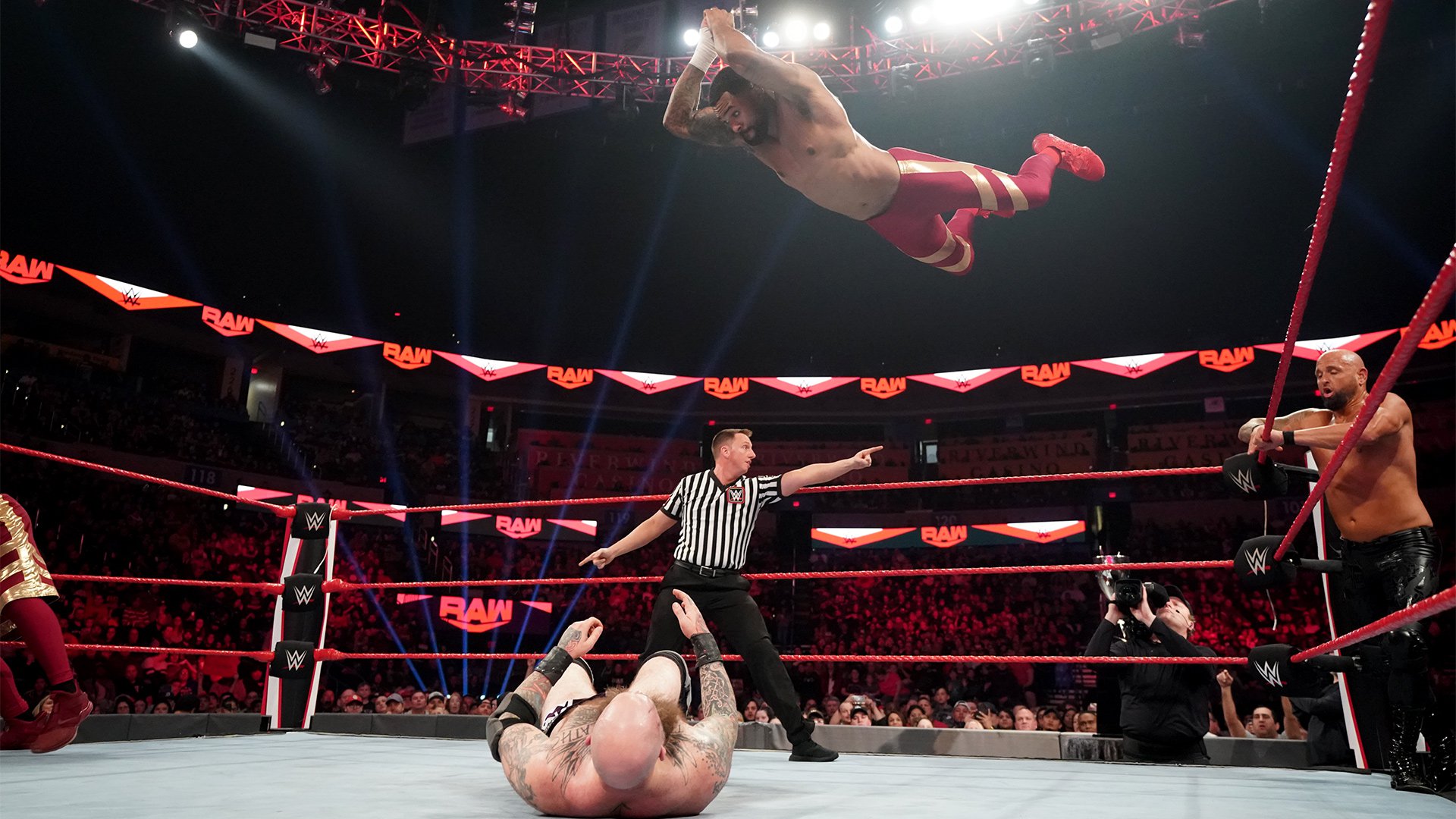 The Street Profits came to Raw looking to “change the conversation” in their Triple Threat bid for the Raw Tag Team Titles. They certainly did that, opening plenty of eyes against reigning champs The Viking Raiders and persistent contenders The O.C., only falling short thanks to a narrow failure to close.

Even though the Profits went home empty-handed, it was hard to argue they weren’t one of the driving forces of the match, as the Raiders and the good brothers had to adapt to them on the fly. Montez Ford went move-for-move with the fleet-footed Ivar early in the match and Angelo Dawkins nearly sealed a win singlehandedly down the stretch. But a behind-the-back tag from Karl Anderson took the Profits out of action and instigated a massive brawl that only ended when Anderson got caught with a massive splash from Ivar, who scored for the win for his team. The Street Profits did indeed change the conversation. The focus, however, remains the same. 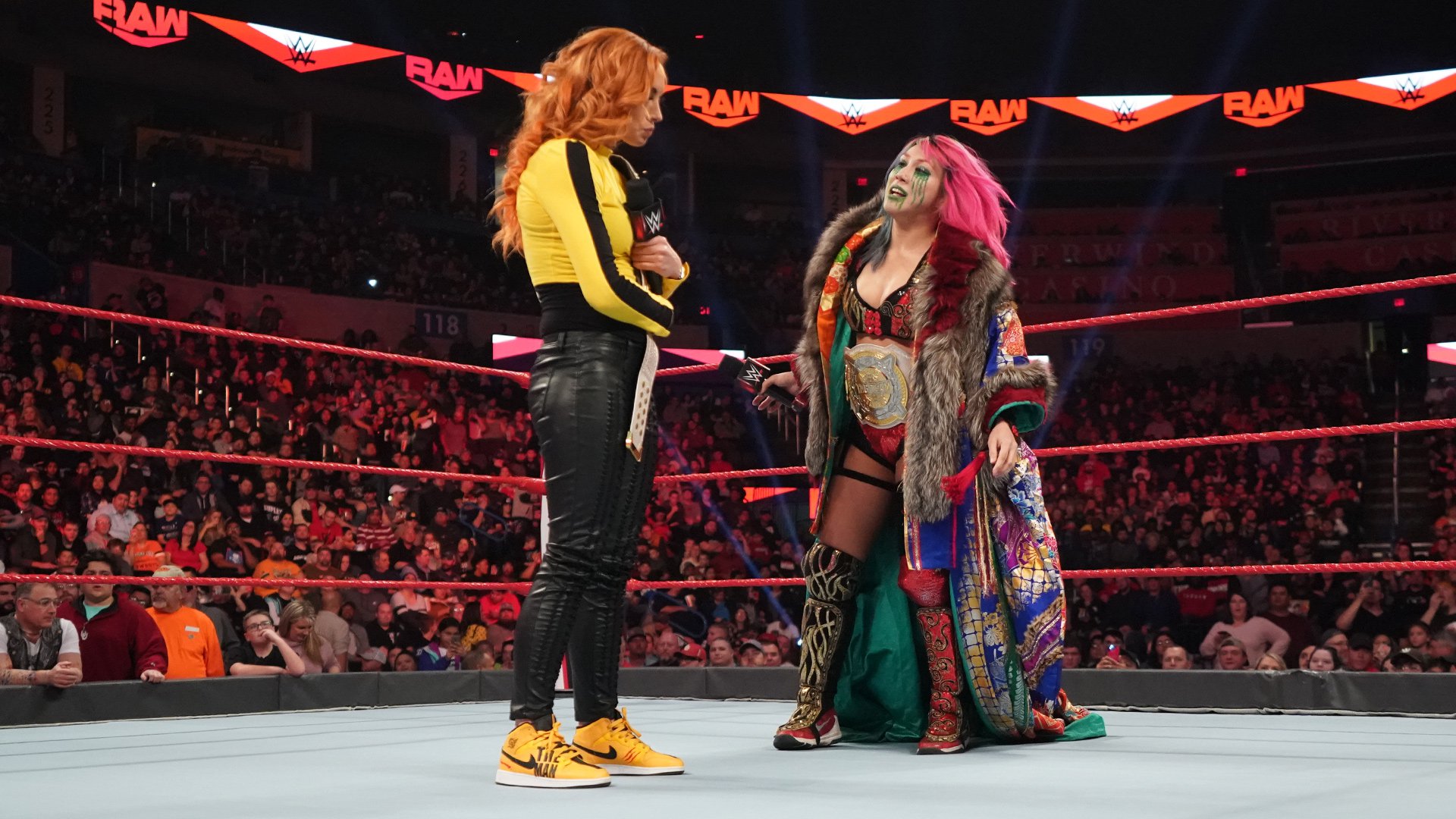 The idea that Becky Lynch would hold off on signing a contract until she received a match with the one woman she can’t beat is either a symbol of her determination or a one-way ticket to self-dismantling the legend she worked so hard to build. Even The Man admitted she had done some soul searching as to whether she should just be happy with her accomplishments and accept that the powers that be were trying to protect her from herself.

But a confrontation with Asuka, her challenger, showed what kind of champion Lynch believes she is. Following an extended entrance where The Empress of Tomorrow sneered at Lynch in Japanese, Becky dropped her foe with a punch to the face and left the ring, as if to say she’s a fighting champion. Doesn’t mean she’s not nervous. But if this is where everything crumbles around Becky, it’s only fitting she goes down the same way she went up: swinging.

Rowan reveals what’s in his cage … to one man 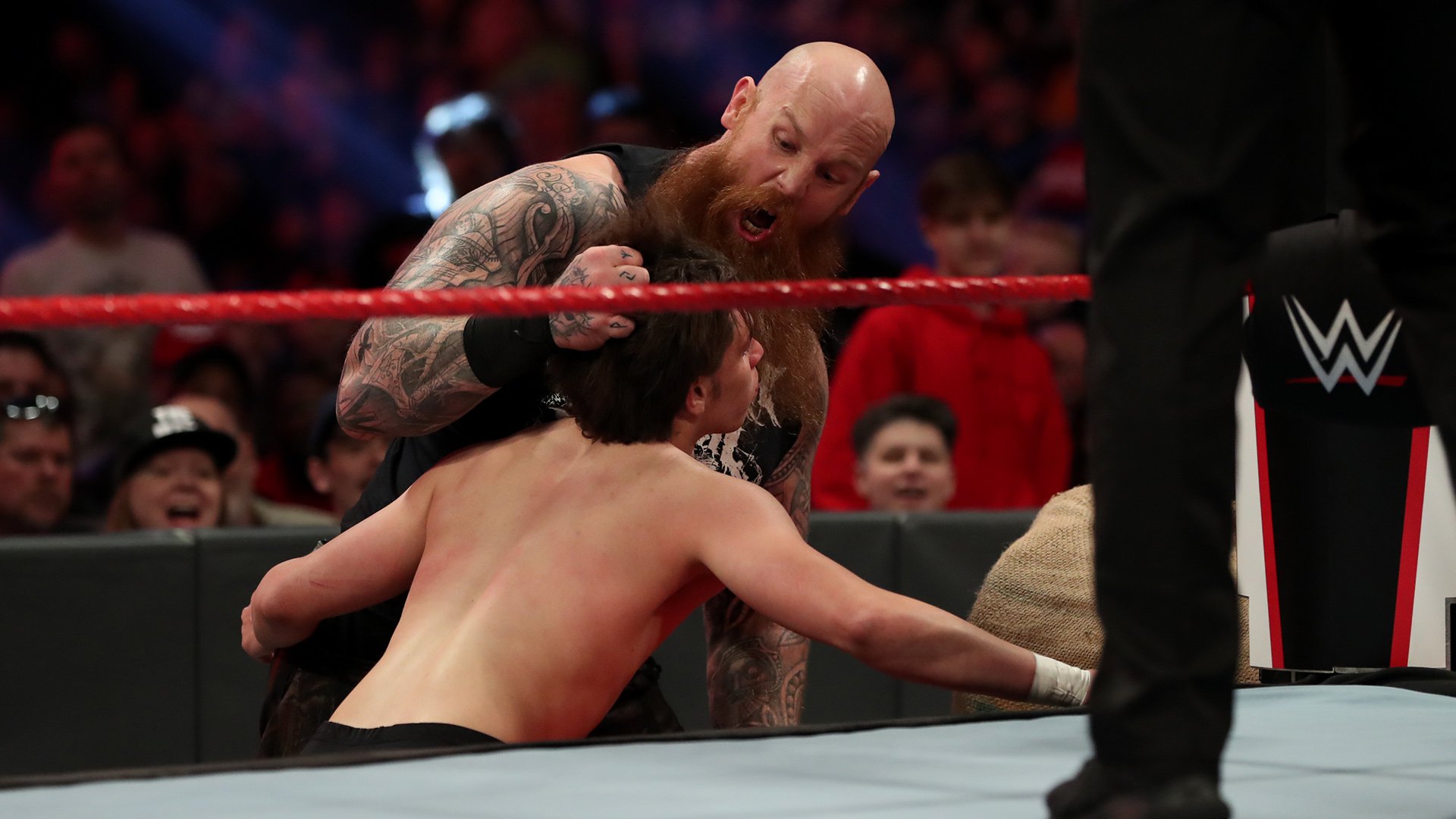 New Year, new outlook for Erick Rowan. The former SmackDown Tag Team Champion stacked another doomed local atop his pile of conquests, but he seemed more open to showing his foes what he has in his pen. Not only did he allow Mojo Rawley to take a peek backstage (the sight left Rawley abjectly horrified), he shoved the local face-first up against the bars. The sight left the poor guy similarly terrified and covered with a strange red liquid to boot. And while we are, of course, nowhere closer to discovering the mystery of what Rowan’s carrying around in there, it looks like we’re getting closer and closer to the day where we do. 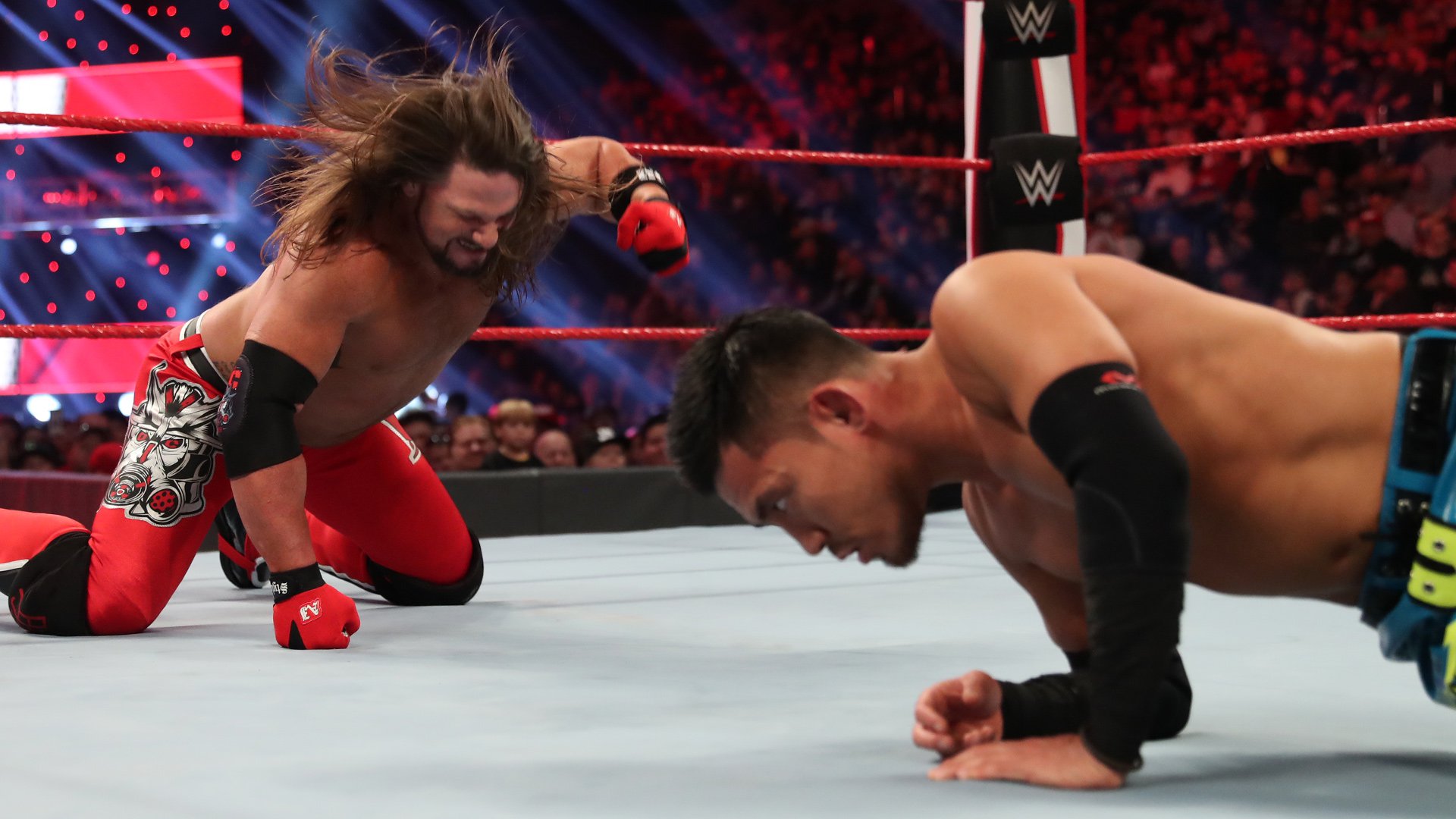 Filed under matches you never thought you’d see: Akira Tozawa vs. AJ Styles, a completely random pairing that turned into a rout thanks in part to Styles’ lingering anger over his rivalry with Randy Orton.

Styles landed an early Phenomenal Forearm against Tozawa but, unwilling to end the match there, opted to play with his food by executing his own variation of The Viper’s hanging DDT and an impressive RKO. Unsurprisingly, Styles scored the victory, but with a bout against Orton looming one week down the road, it’s plain to see where his focus is, was and will be until he gets satisfaction. 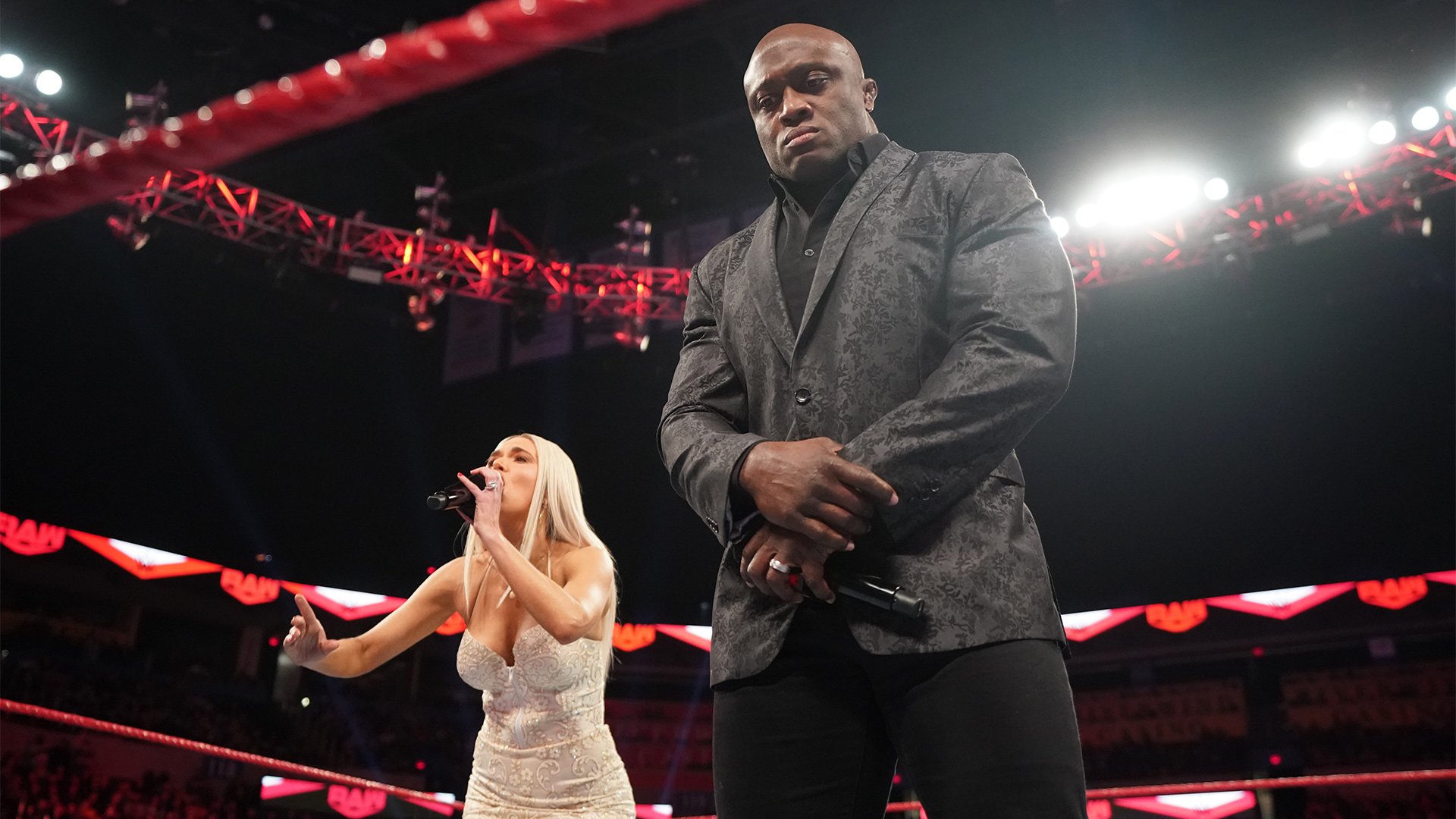 Bobby Lashley and Lana’s wedding did … not go as planned last week. The (proverbial) honeymoon is looking to be a similarly rocky affair. While Lashley and Lana were finally married by their Belichickian wedding officiant, it didn’t take long for Rusev to interrupt their victory lap, this time via satellite from the beach.

The Bulgarian Brute’s snarky “gift” of a wedding album that featured last week’s humiliation infuriated Lana to the point of hysterics, but Lashley quickly commanded his wife to “shut up” and dared Rusev to fight him next week, where The All Mighty vowed to strip away whatever manhood Rusev had left. The jilted brawler instead ripped off his cheesy flower-print shirt and promised to return as The Bulgarian Brute next week, vowing to brutalize every inch of Lashley’s body. Lana, he said, could have what’s left. Conspicuous by her absence was Liv Morgan, though she pointedly noted during a later backstage interview that Rusev might need someone in his corner next week to cancel out Lana. Make of that what you will …

Charlotte Flair’s march to the Women’s Royal Rumble Match (and beyond?) continues apace, with Sarah Logan emerging as the latest Superstar to be trampled under The Queen’s diamond-encrusted boot. Logan, unwilling to be made an example of, jumped Charlotte before the match and put on an impressive showing despite the match never officially starting. But it was her disrespect of Flair’s robe that drove The Queen into a fury, leading her to retaliate and leave Logan down with barely a sweat broken. We’re one week closer to the Royal Rumble, and it’s increasingly looking like Charlotte’s to lose. 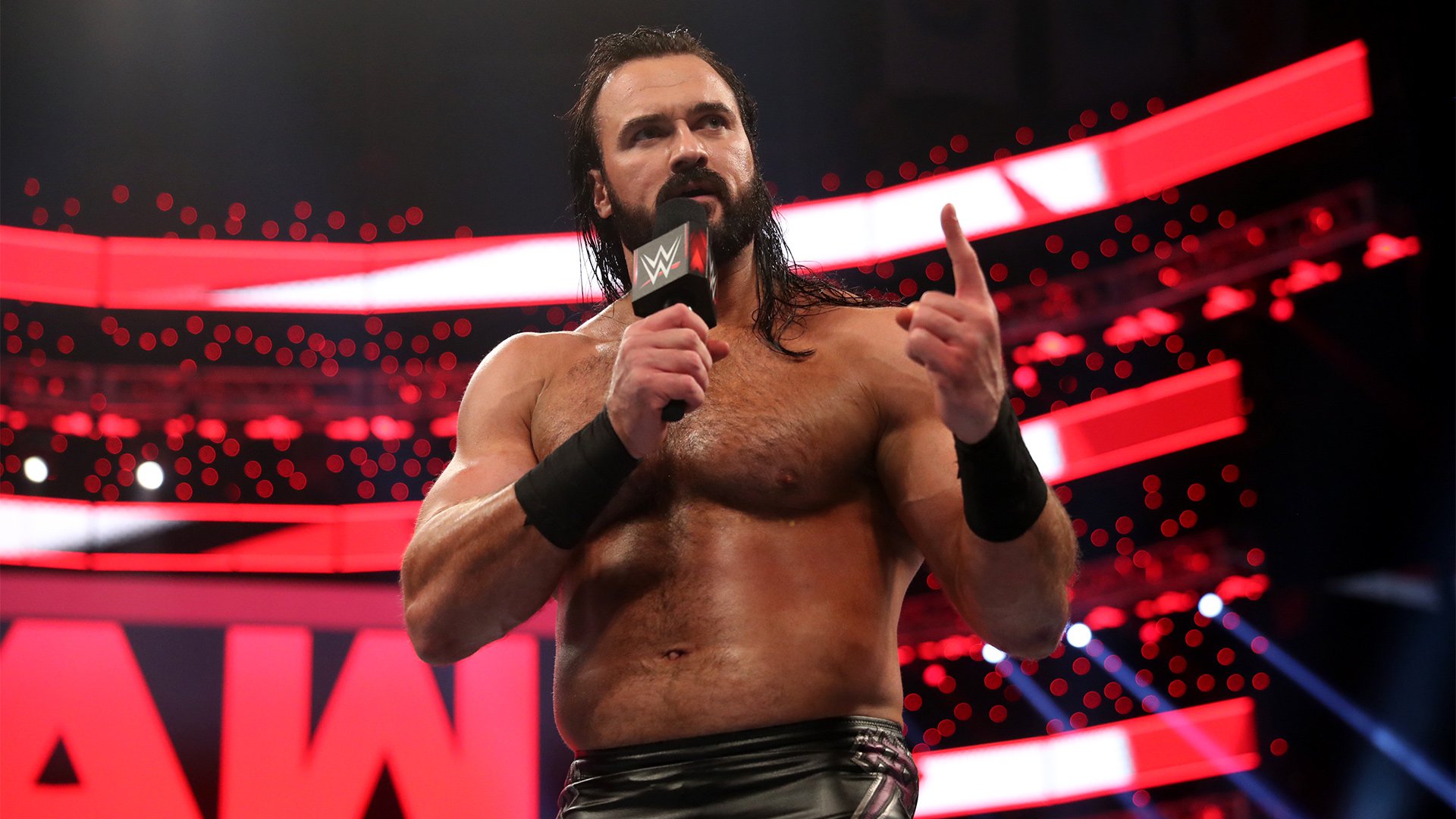 Prayers up for No Way Jose, who simply never stood a chance against a Drew McIntyre who has more or less decided he’s simply incapable of losing anything ever again. In the two previous weeks, Zack Ryder & Curt Hawkins found themselves eating a face full of boot. This week, Jose was quickly sent tumbling in their footsteps, bulldozed by a Claymore after only a brief burst of offense. Just to complete his victory, McIntyre delivered a second, crowd-sourced Claymore after the match and merrily threw hands with the conga line — though he seemed a little sorry about beating up the cheeseburger.

With his mission to build momentum already known, it was no surprise that McIntyre declared for the Men’s Royal Rumble Match, looking to earn the first World Title challenge of his WWE career. He was also quick to take great umbrage with the fact that he has never had an opportunity to contend for a world championship. That might make it seem like his eyes are getting bigger than his stomach, but there’s clearly no better time to declare his intentions. Winning is energizing, he’s doing a lot of it and it doesn’t look like he’ll be stopping anytime soon. 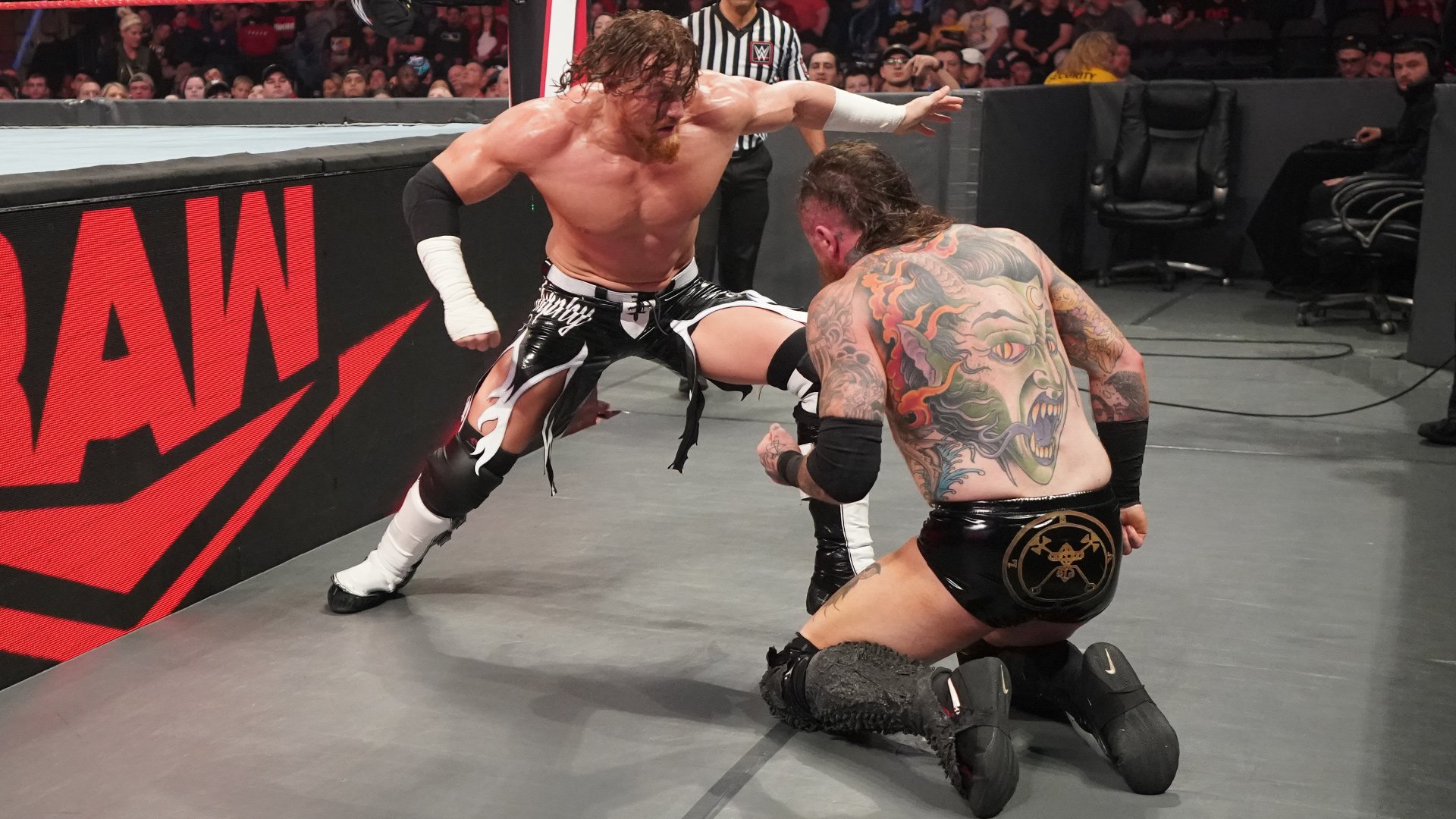 With Buddy Murphy seemingly in his rearview mirror, Aleister Black began Raw in search of worlds to conquer and chins to cave in. In terms of someone with whom to pick a fight, you could certainly do worse than Shelton Benjamin. Indeed, Black’s opponents have been notable lately for actually living up to the standards The Dutch Destroyer sets for those who come knocking on his door, and Benjamin was no exception, deadlifting Black out of an omoplata into a modified suplex.

Black, however, has been notable for winning those matches anyway, and he did so here as he has so many times prior. But Buddy Murphy struck in the immediate wake of the match, ambushing Black from behind and beating him around the outside, finally dropping his foe by balancing his chin on the back of a steel chair and kneeing him full in the face. Murphy then sat cross-legged on the barricade while Black stirred to life, as clear a sign as any that their business remains unfinished, and the door remains open. 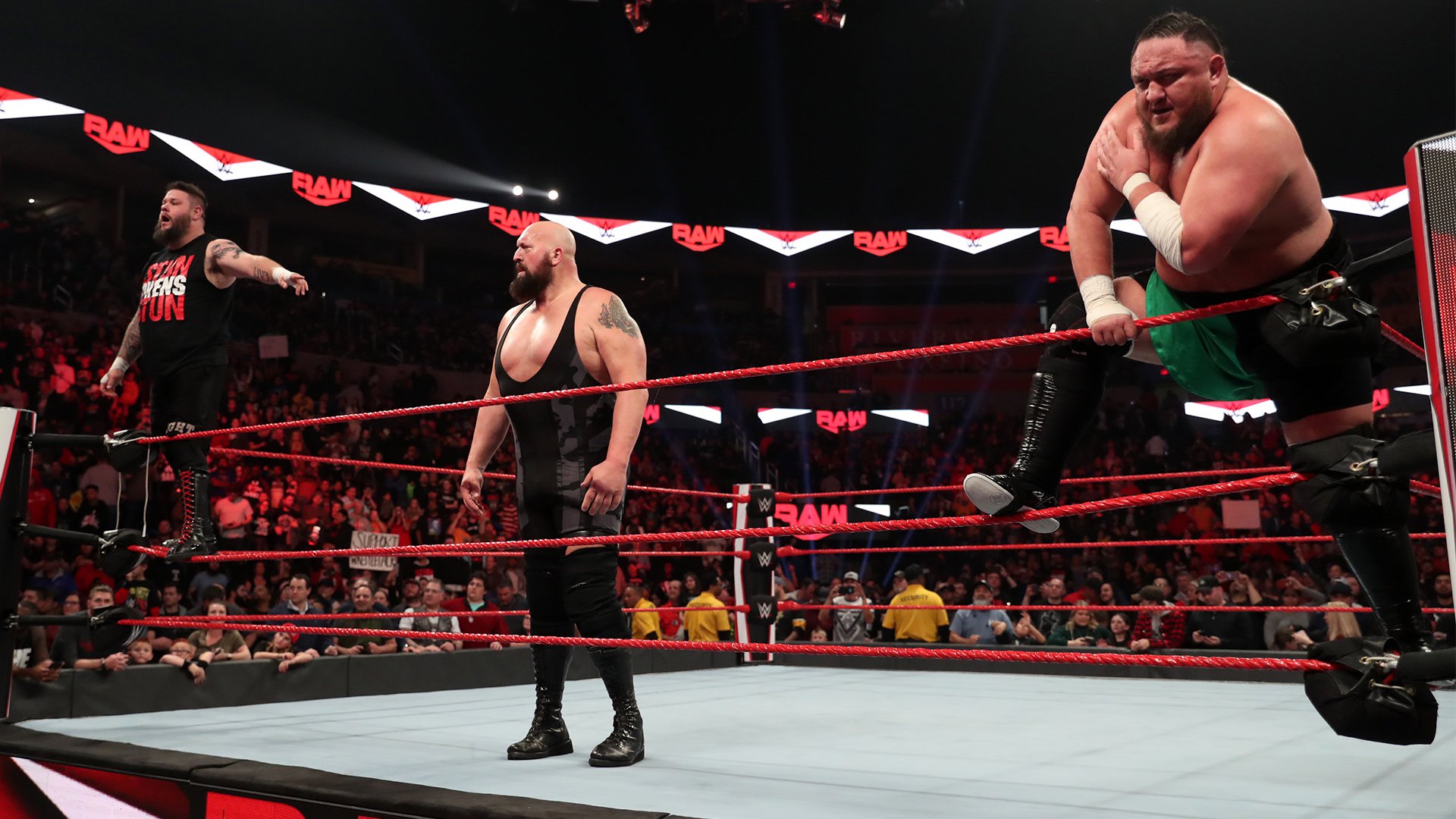 When you’re looking for a third man to battle Seth Rollins & AOP, you go big. Literally. Kevin Owens and Samoa Joe took their seven days of lead time to recruit none other than Big Show to their cause, unveiling The World’s Largest Athlete at the last possible second in a main-event bout against “The Monday Night Messiah” and his two disciples.

And even though the makeshift trio of heavy-hitters only got the win via disqualification when Rollins smashed Show in the back with a chair when he was ready to double-chokeslam AOP, selecting Big Show was still a wise choice. KO, Joe and Show got the last word, with The World’s Largest Athlete downing Rollins with a KO Punch during a post-match brawl moments later. Seth Rollins refashioning himself as a literal savior certainly lines up with his rhetoric over the last few weeks, but given the events of tonight, he might want to reconsider turning the other cheek since there are plenty of people on the current roster and beyond who’ll be lining up to punch it.