Why did Randy Orton attack Edge? 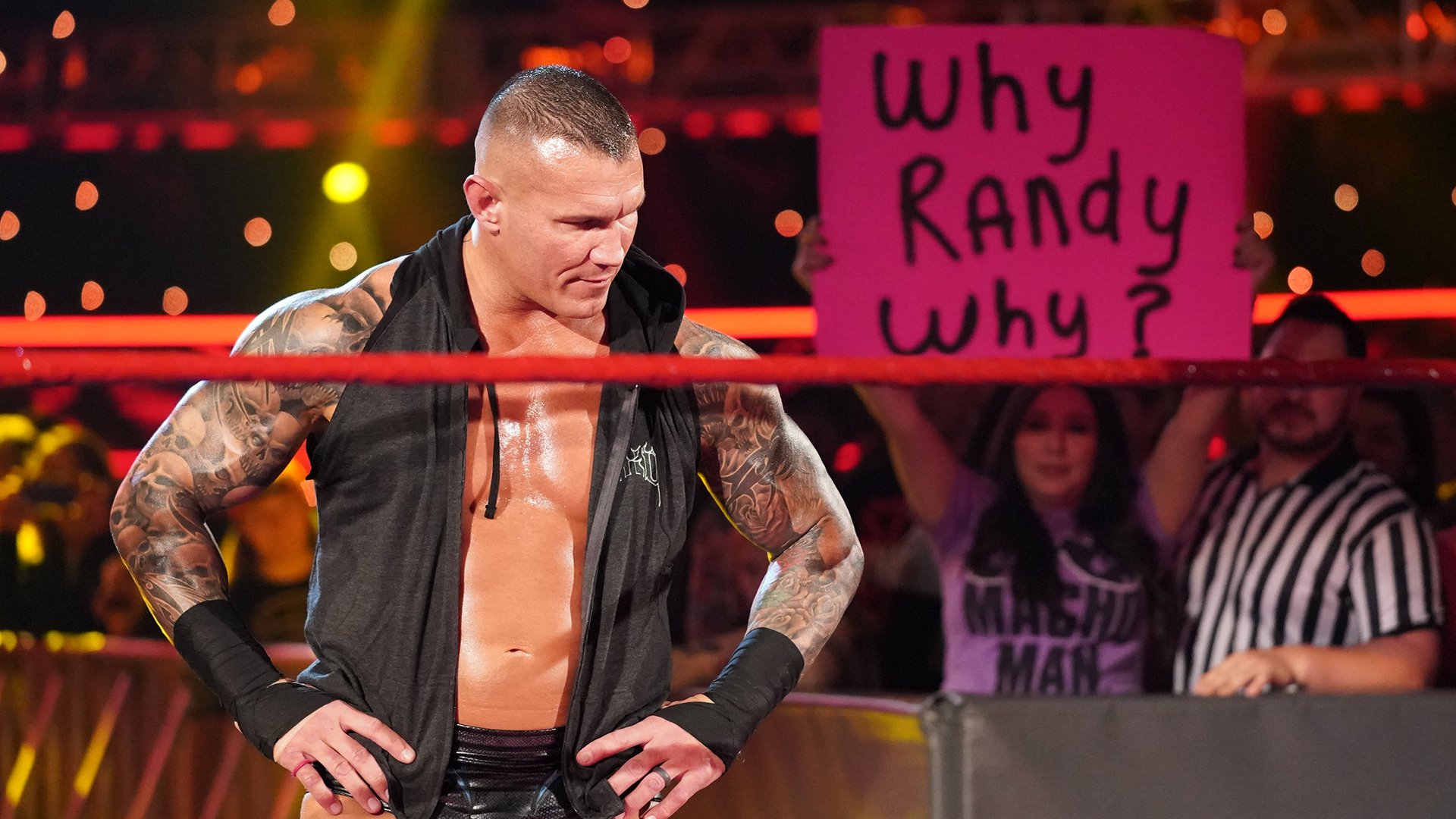 SALT LAKE CITY — Edge’s Raw return lasted all of 15 minutes before Randy Orton sent the WWE Hall of Famer out on a stretcher, courtesy of a one-man Con-Chair-To that left The Ultimate Opportunist in a heap. The good news is that Edge is on the road to recovery, as revealed by Raw’s commentary team. The bad news is that we still don’t know why any of this happened.

Despite being granted time at the top of this week’s Raw to presumably explain his actions, Orton found himself at something of a loss for words. The Viper began to speak on several occasions, but as the boos intensified, Orton seemed to rethink his strategy. “I can’t do this,” Orton said before he dropped the mic and walked away, leaving us with a downed hero, an unanswered “why” hanging in the air and the truth known only to one man who isn’t telling. 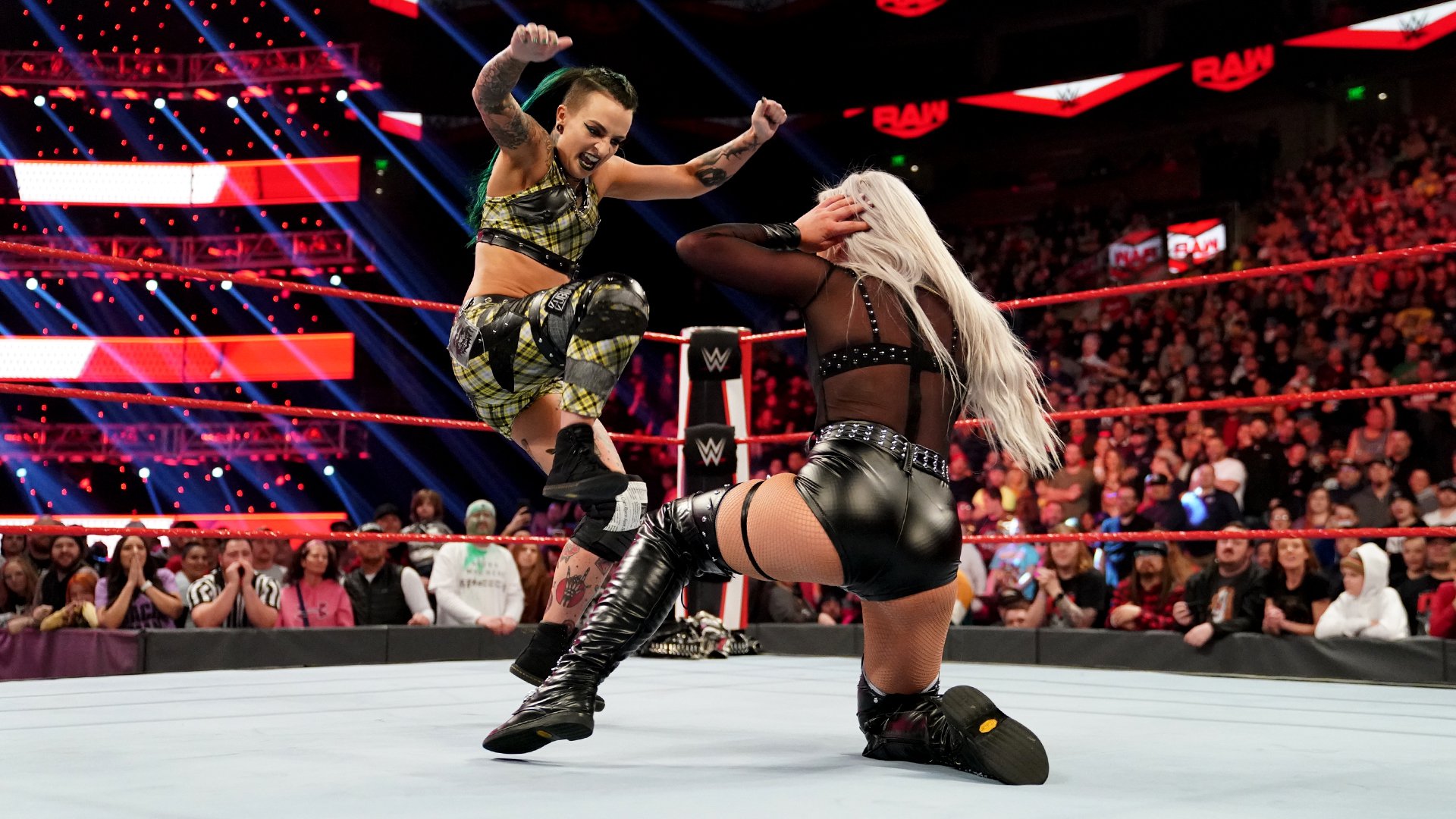 With no one banned anyone from ringside, all signs pointed to some shenanigans during Liv Morgan’s rematch with Lana. Surprisingly, that wasn’t the case. No one got involved in the match, and Liv won without incident. After the match, however, was a different story.

Morgan’s victory lap over The Ravishing Russian was spoiled by the sudden return of Ruby Riott, who returned to seemingly congratulate her former Riott Squad running mate and then suddenly attacked, dropping Morgan and leaving her to the mercy — or lack thereof — of The Ravishing Russian, who struck with a facebuster. Clearly, the new Liv Morgan is not someone who has a problem making enemies; good for her, then, that the list is growing by the day. 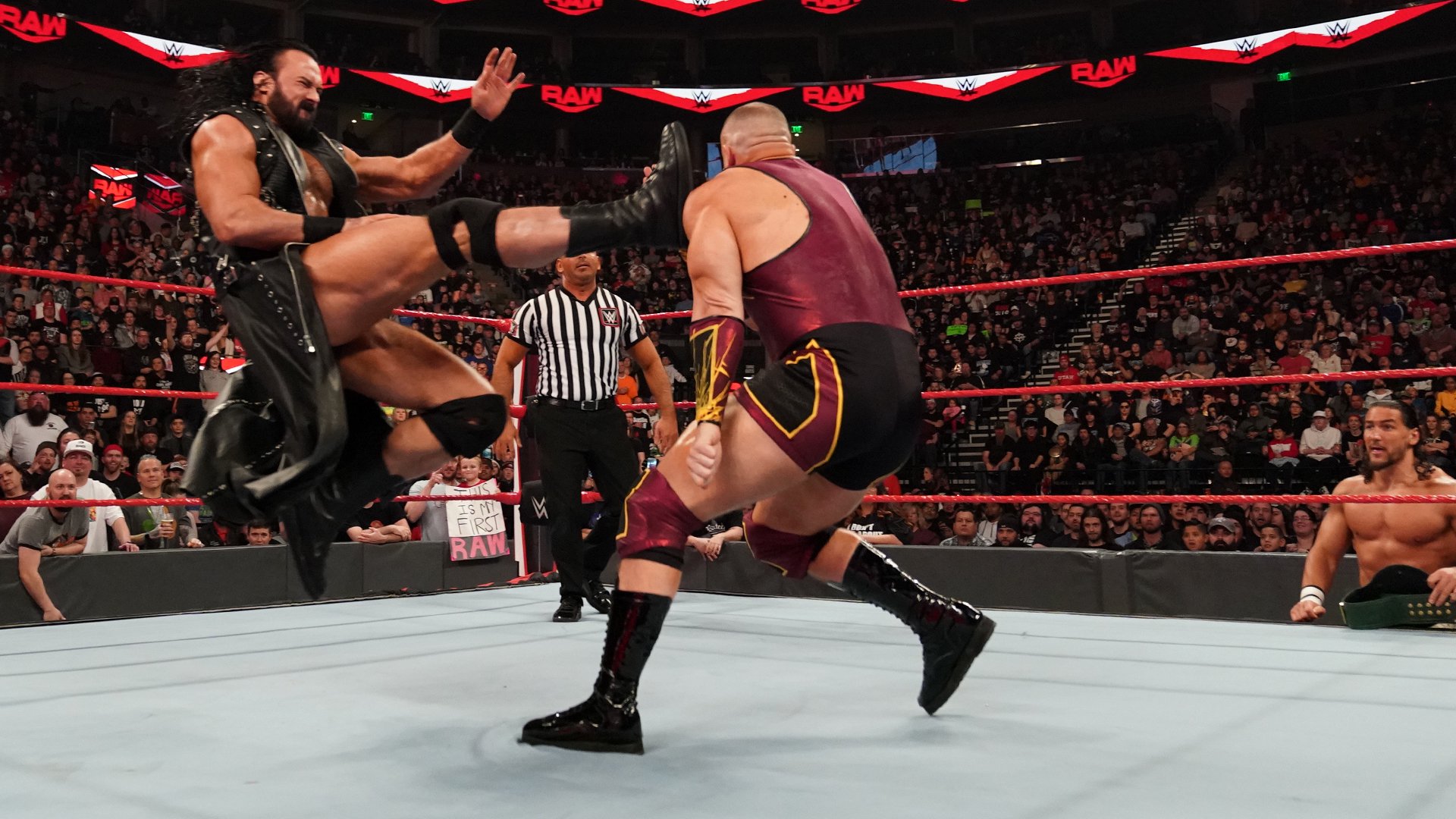 Is Drew McIntyre unstoppable? It’s a bit early to say for sure, but early returns are looking good. One week after defeating The O.C. in a Handicap Match, the Men’s Royal Rumble Match victor defeated 24/7 Champion Mojo Rawley in a match that lasted a grand total of three seconds.

McIntyre also had some fighting words for WWE Champion Brock Lesnar. The Scotsman claimed his WrestleMania opponent was “apprehensive” in the face of the Claymore, a move that had already upended him once and a move McIntyre promised would defeat Rawley in three seconds. It did, seemingly confirming that Drew’s ace in the hole is nothing to scoff at, and Lesnar might have more on his hands than he thinks. As for “offensive lineman” Riddick Moss, Mojo might want to consider a contract renegotiation. Or, at the very least, some incentives. 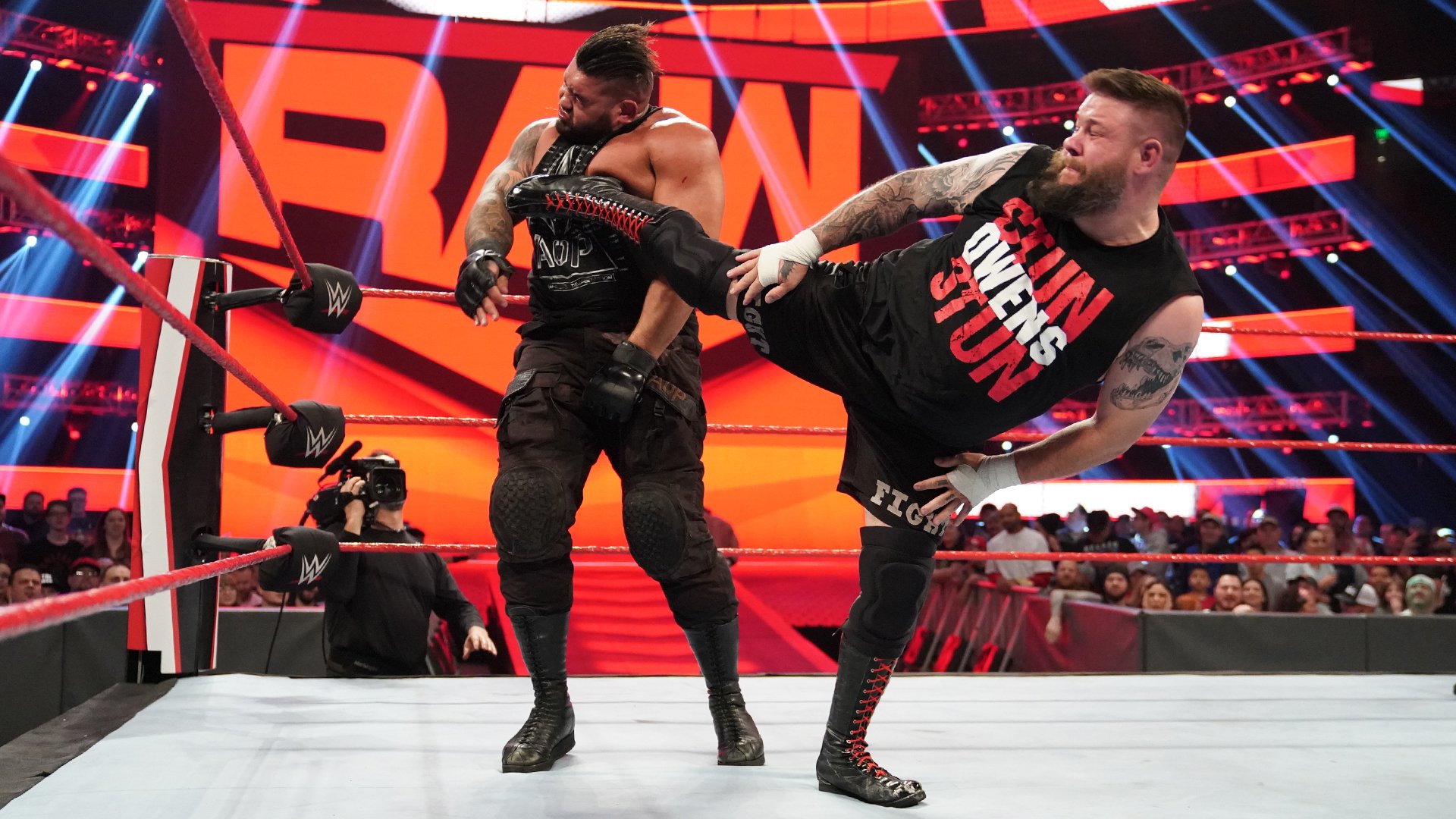 Let’s be honest: Kevin Owens was never going to stop battling Seth Rollins and his disciples even in the wake of Samoa Joe’s rough landing last week. But bravery doesn’t always translate into wins, and Monday’s Six-Man Tag Team Elimination Match proved to be an admirable effort with a demoralizing end.

Facing Buddy Murphy & AOP with The Viking Raiders at his side, Owens had as good a chance as ever to land a blow against The Monday Night Messiah and his flock. But thanks to a combo of Rollins interfering with a Stomp and a grisly collision with the ring apron, Erik & Ivar were taken out of commission, leaving Owens to go it alone. KO improbably brought it down to one-on-one by eliminating Murphy and Akam, but another assist from Rollins helped Rezar snuff out an excellent effort by the former Universal Champion. It might not help him sleep much better, though. In a rivalry like this, moral victories will only get you so far.

Aleister Black reveals his worldview to the Raw roster 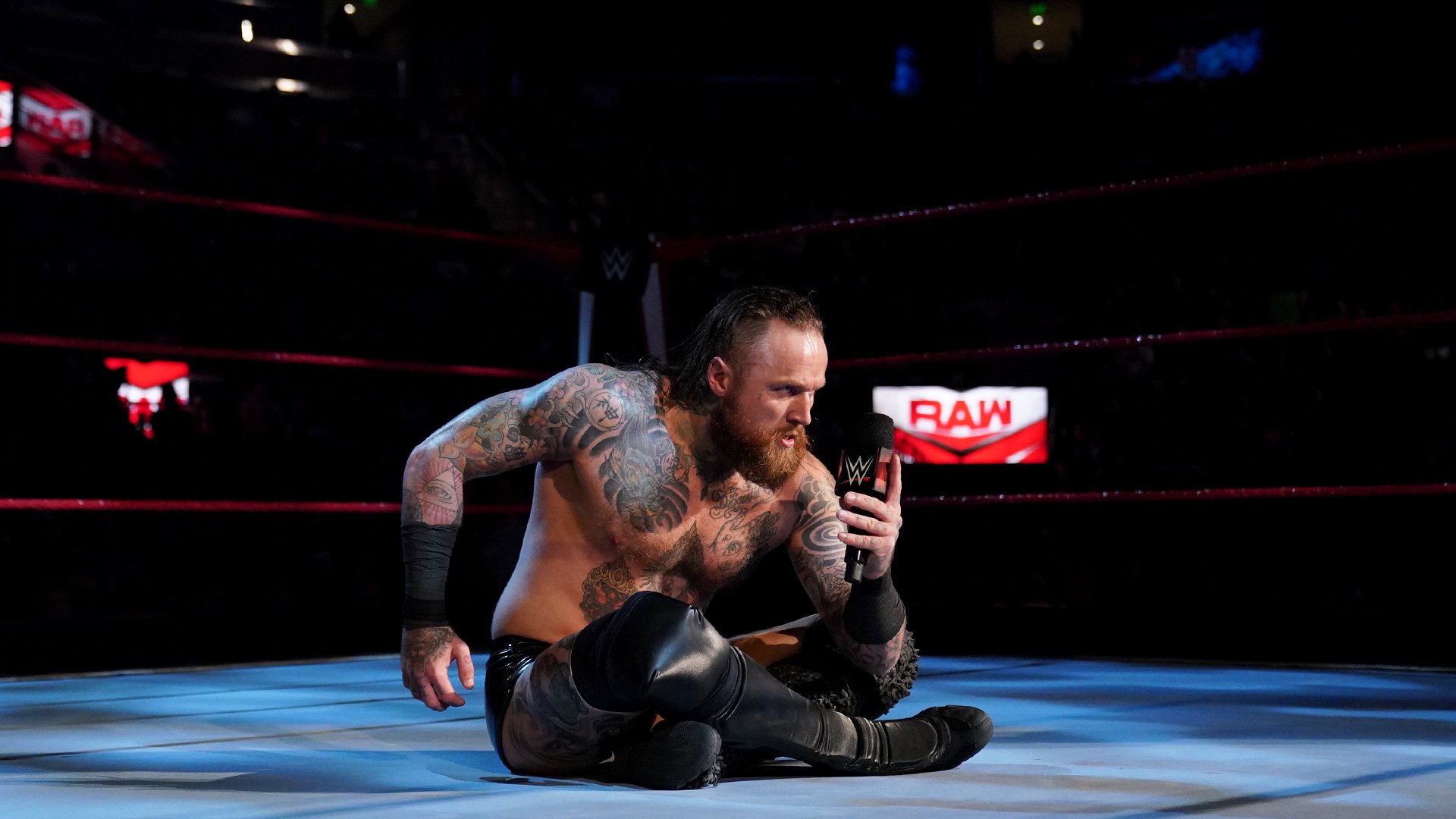 If it’s momentum you seek, Aleister Black has it, but to what end? That is yet unclear. The Dutch Destroyer added Eric Young to his list of conquests, but one week after putting the entire Raw locker room on notice, he offered no insight into his endgame, preferring instead to leave it as an open-ended question. He did, however, offer one glimpse into his worldview: that people should be whoever they want to be, all the better to offer him the “relentless competition” he craves. It’s the same advice he was given once upon a time, and by the looks of things, that advice is clearly serving him well. 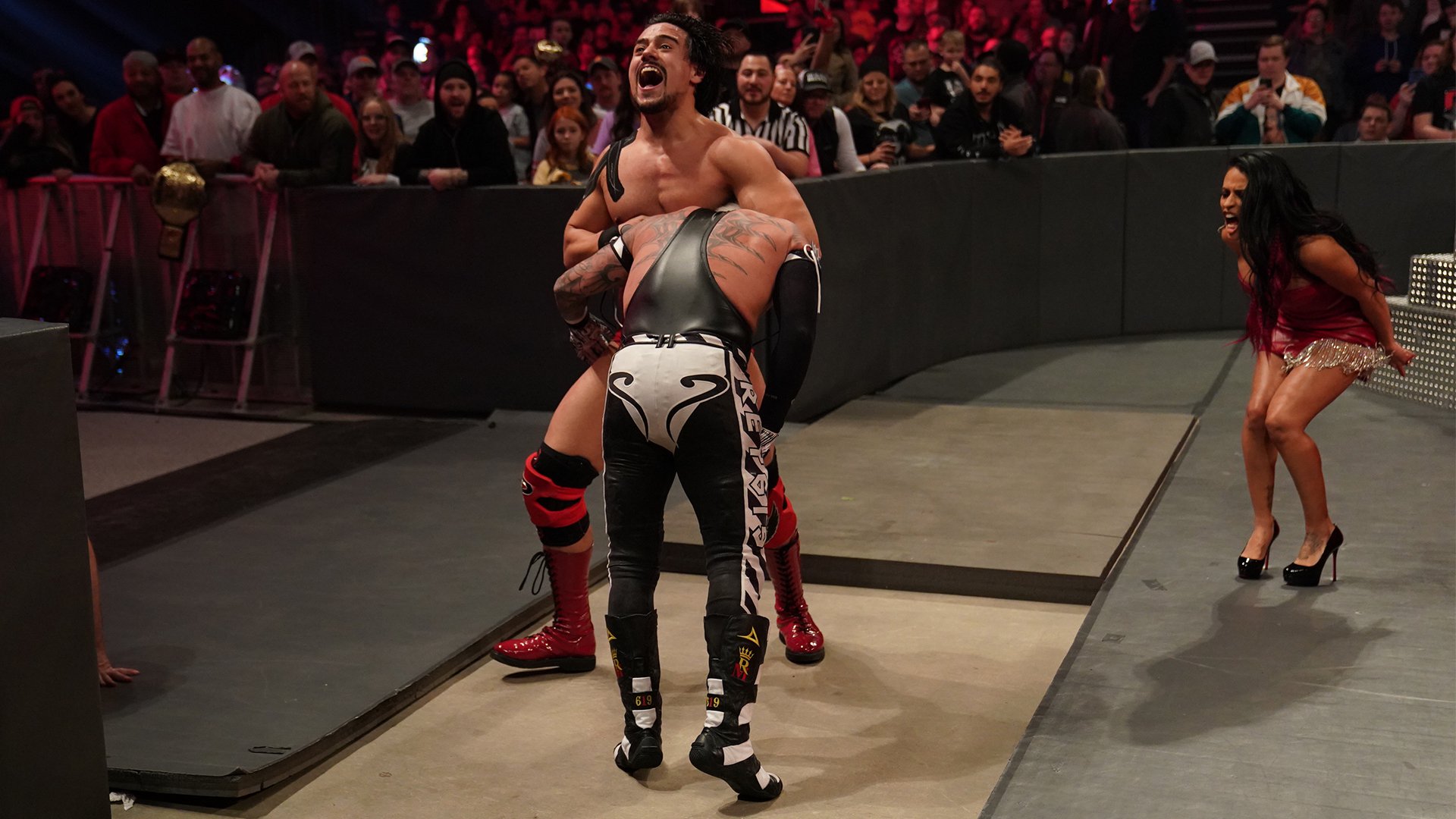 The devil works hard, but Zelina Vega works harder. One week after losing Andrade to a wild attack by Humberto Carrillo, La Muñeca brought in Angel Garza — former NXT Cruiserweight Champion, Carrillo’s cousin and self-proclaimed “leader of the family” — to face the young Superstar. Her plan paid off magnificently. Garza took out Humberto with a sickening attack and made an example of Rey Mysterio, who came to Carrillo’s defense and found himself in a match with the former champion instead.

Garza is as eccentric as he is ruthless, and Mysterio was caught somewhat flat-footed against a competitor he seemed to underestimate. (Mysterio might have thought better since he faced Garza’s uncle Héctor in WCW once upon a time.) And after Zelina Vega instigated a confrontation on the outside, Garza got what he came for, attacking Mysterio from behind and drilling him into the exposed concrete of the arena floor with a Hammerlock DDT. Whether Garza proves to be a permanent addition to Vega’s clientele or just another hungry Superstar in the mix remains to be seen. Either way, Zelina’s happy, and that means trouble. 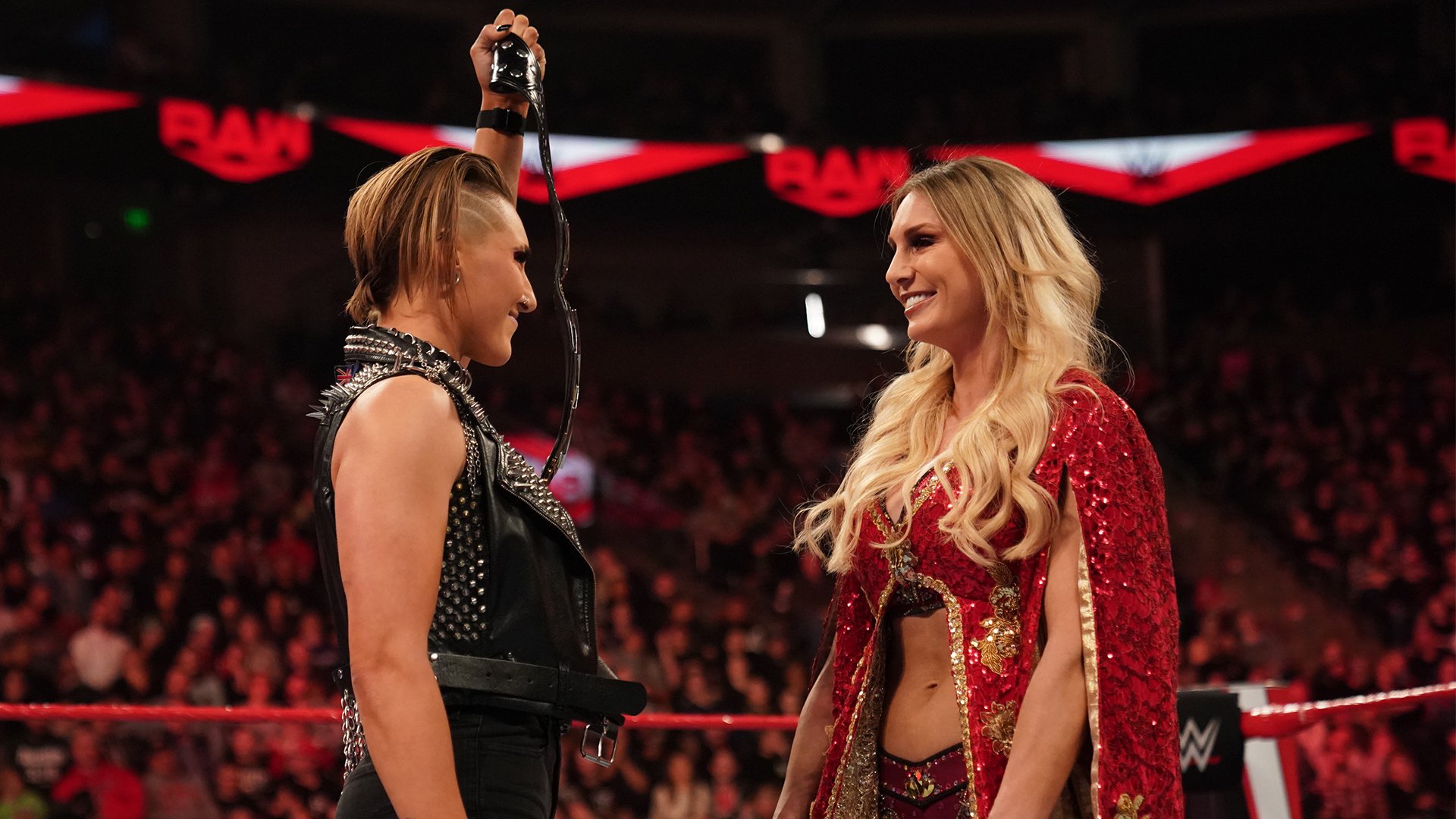 Charlotte Flair’s victory in the Women’s Royal Rumble Match allows her to challenge for any championship she wants at WrestleMania — the operative word here being “any,” as the 10-time Women’s Champion found herself fielding an offer from a surprising titleholder: NXT Women’s Champion Rhea Ripley.

Making a surprise appearance on Raw, The Nightmare put herself forward as a potential opponent for The Queen at WrestleMania, and she made quite the case for herself. While Charlotte owns several wins over Raw Women’s Champion Becky Lynch and SmackDown Women’s Champion Bayley, she has never beaten Ripley. In fact, Ripley has beaten her. It was enough to earn consideration from The Queen, though Charlotte’s only response was a “WOO!” that drew immediate speculation from the commentary team. Was Charlotte thrown off her game? Is she just keeping Ripley on the hook? She’ll tell us when she’s ready. Until then, we have to wait. 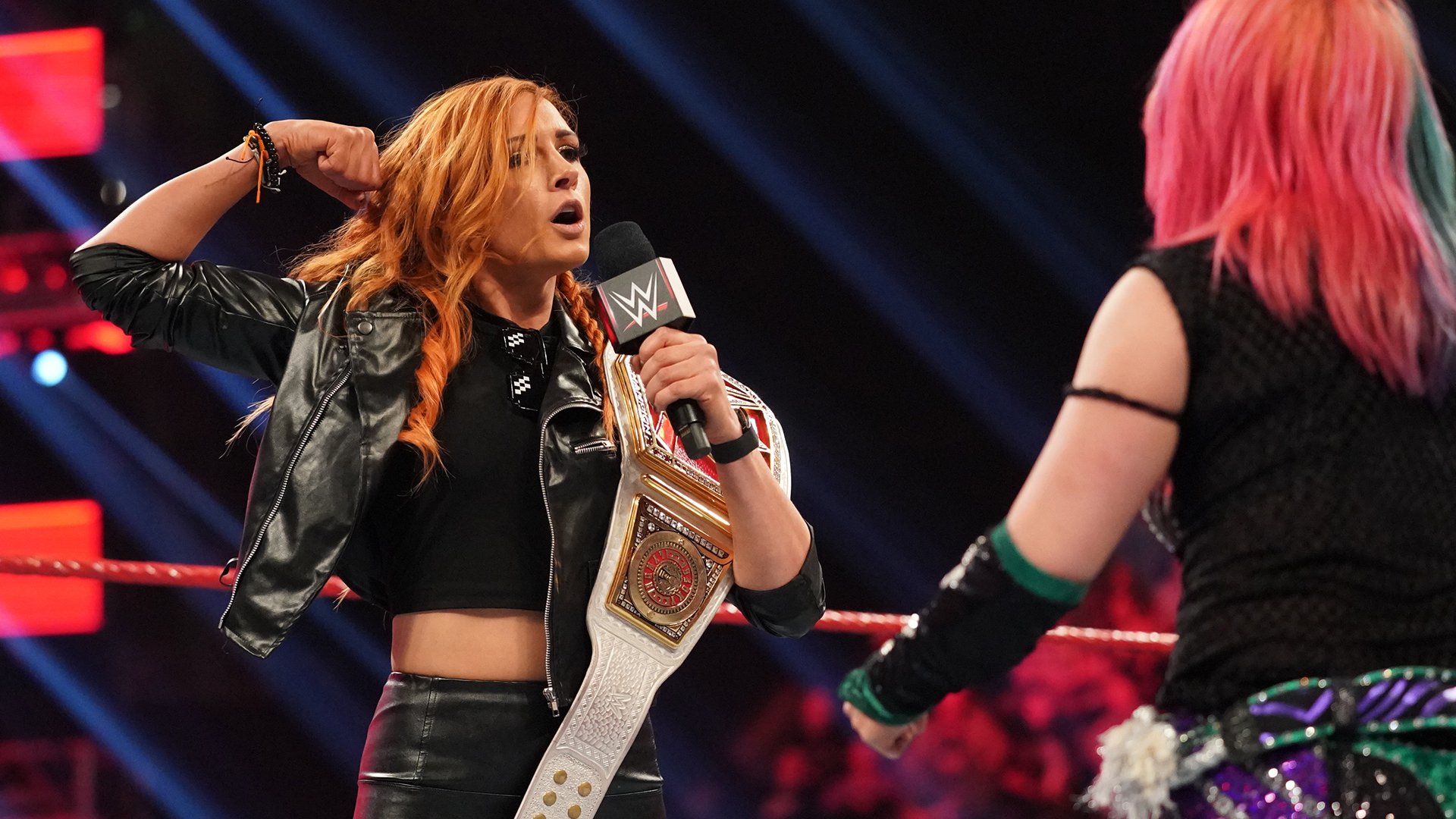 Asuka’s loss to Becky Lynch at the Royal Rumble event was close. Too close, as it turns out, for her to accept. Minutes after outlasting Natalya in a match that quickly got chippy and personal, The Empress of Tomorrow grabbed hold of a mic and issued a challenge for Becky Lynch to once again put the Raw Women’s Title on the line, effectively demanding a rubber match between the two rivals.

Unlike Charlotte Flair, who had refused to tip her hand one way or the other, The Man happily answered her challenger then and there. Sporting a pair of IRL “Deal With It” sunglasses, Lynch happily accepted Asuka’s offer, looking to put her new “superpowers” to good use and double up against The Empress of Tomorrow on The Road to WrestleMania. As if to make her point, The Man took out an interfering Kairi Sane with the help of the “eyes in the back of her head.” All well and good … provided she also keeps her eyes on the destination and doesn’t get so caught up in the side quests along the road. 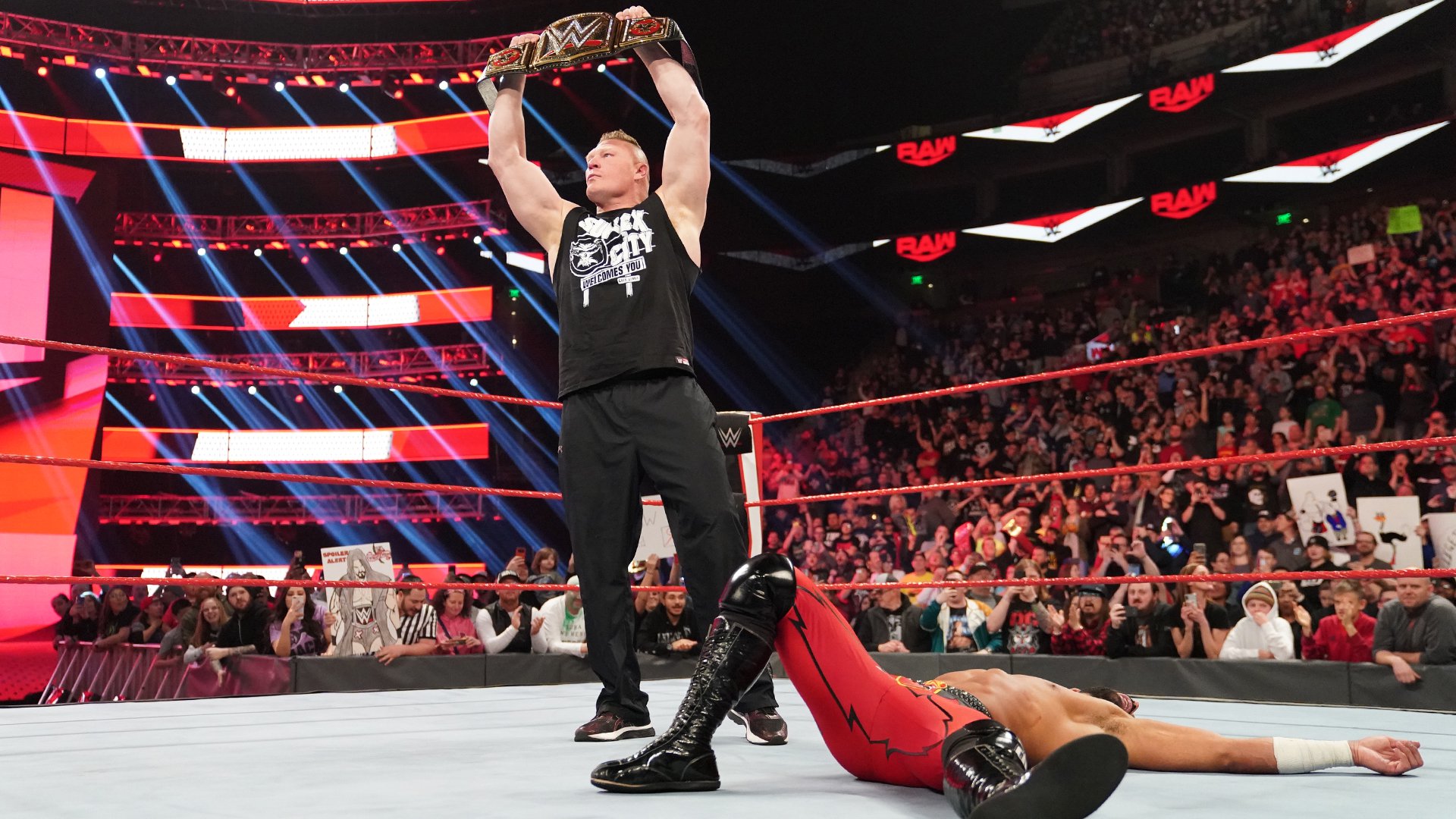 A few weeks ago, Ricochet looked Brock Lesnar in the eye and said he wasn’t scared to fight him. Here’s his chance. The former United States Champion is set to challenge The Beast Incarnate for the WWE Championship at WWE Super ShowDown, having outlasted Seth Rollins and Bobby Lashley in a truly chaotic Triple Threat Match.

Unsurprisingly, AOP & Buddy Murphy emerged to assist Rollins, but the arrival of Kevin Owens and Erik of The Viking Raiders (and their steel chairs) helped drive Rollins’ allies away. With things back to normal, Ricochet claimed the win with a 630 to Lashley. And right on cue, Lesnar appeared out of nowhere, dropping his Super ShowDown challenger with an F-5 as Raw went off the air. Ricochet gets the fight he wants, and from the looks of things, Lesnar is happy to give it to him.

We already know that Royal Rumble winner Drew McIntyre has chosen to challenge Brock Lesnar at WrestleMania, but will The Beast still be WWE Champion come April 5?

He’ll first have to get through either Ricochet, Raw Tag Team Champion Seth Rollins or Bobby Lashley come WWE Super ShowDown on Thursday, Feb. 27. Those three men will complete in a Triple Threat Match on Raw to determine the next challenger for Lesnar’s title.

Ricochet played a critical role in Lesnar’s elimination from the Royal Rumble Match, teeing him up for McIntyre’s Claymore. The Monday Night Messiah has been running roughshod over Raw since forming his stable of disciples, while Lashley — a former Intercontinental and United States Champion — is no stranger to gold either.

See who emerges to challenge The Beast this Monday night on Raw at 8/7 C on USA Network!