Randy Orton finishes what he started against Matt Hardy 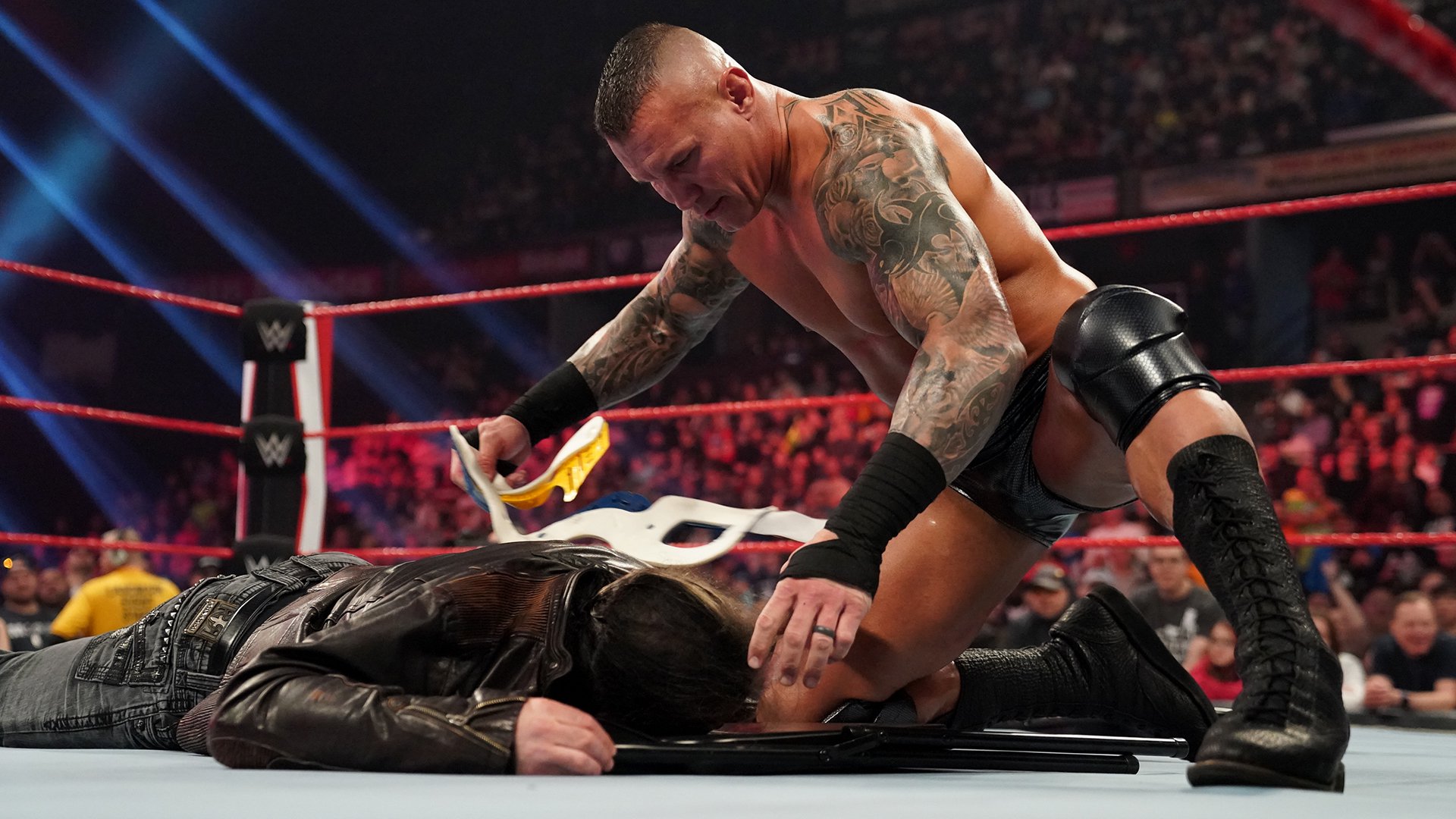 WASHINGTON STATE — We may never understand why Randy Orton attacked Edge and now, Matt Hardy. Twice. But we know this: He is sorry for it.

Hardy wasn’t cleared to compete in the announced No Holds Barred Match with Orton but defiantly confronted him anyway, waving a steel chair and demanding The Viper “finish” him. The Apex Predator joylessly granted the request, RKOing Hardy before turning the chair against the legendary Superstar in an attack that culminated with two one-man Con-Chair-Tos against the steel steps.

Prior to the horror show, Orton finally addressed his attacks on both Hardy, who he claimed to respect, and Edge, who he insisted he loved, in what was perhaps the most surprising development of the encounter. “I am sorry,” he said, without elaborating. “I am truly sorry.” He apologized after the vicious assault, too, screaming that he was sorry at Hardy’s limp body before stalking off to the locker room. For all the difference it made, at least we got that. 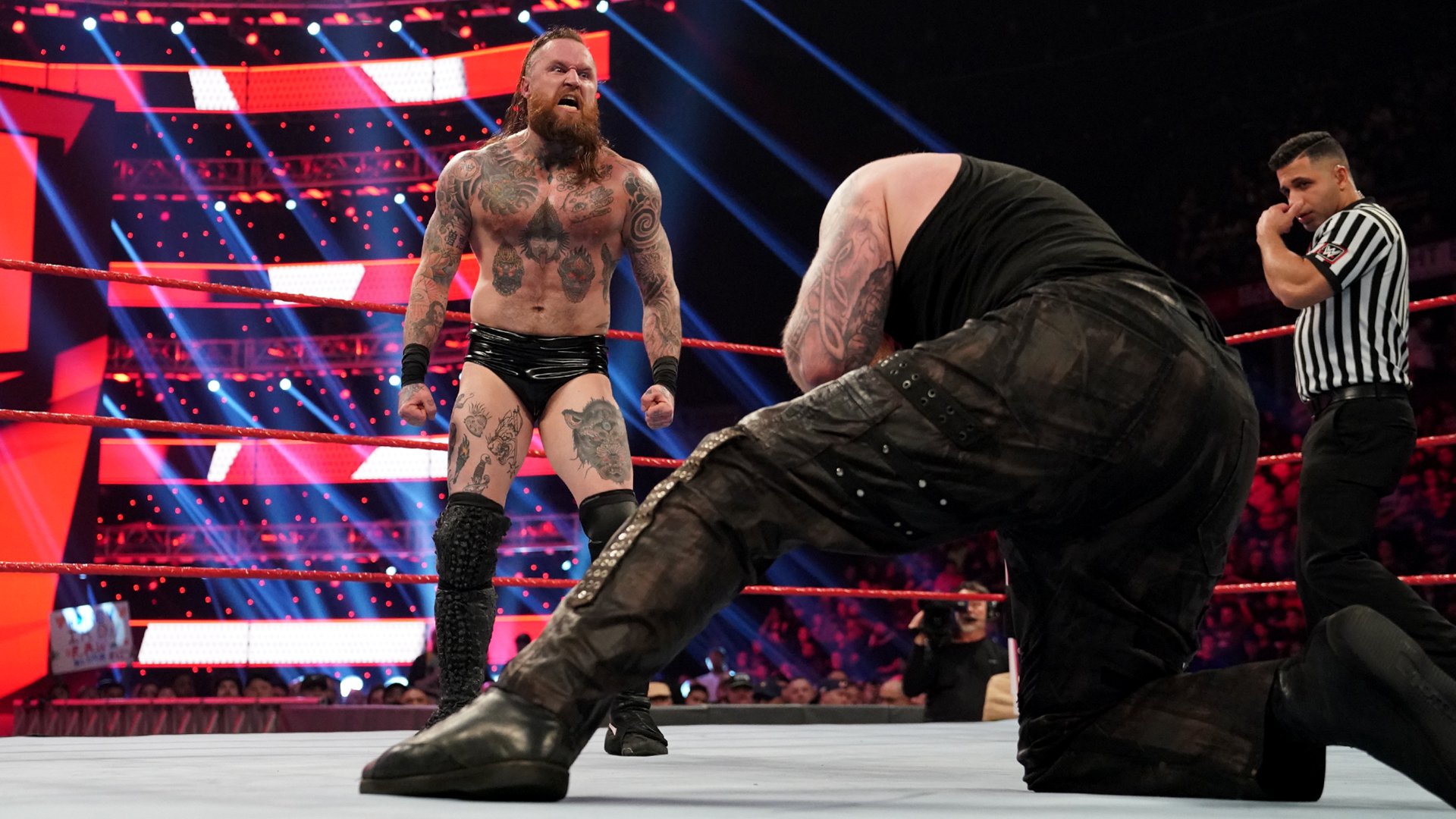 We should know by now that Aleister Black is not a man who makes idle threats, and yet it was still somewhat surprising to see the former NXT Champion, who has vowed to fight anyone and everyone in the locker room, not just hang with the monstrous Erick Rowan but defeat him in decisive fashion.

Rowan, of course, didn’t make it easy for Black; the big man’s opponents in the Tuwaiq Trophy Gauntlet Match should be sweating right about now. Nevertheless, The Dutch Destroyer countered Rowan’s fists with knees and feet, narrowly escaping the Iron Claw and dropping Rowan with a pair of Black Masses when one didn’t quite get the job done. Black’s endgame still remains somewhat unclear, as he had nothing to say after this victory. Then again, it certainly seems like he said all he needed to in the ring. 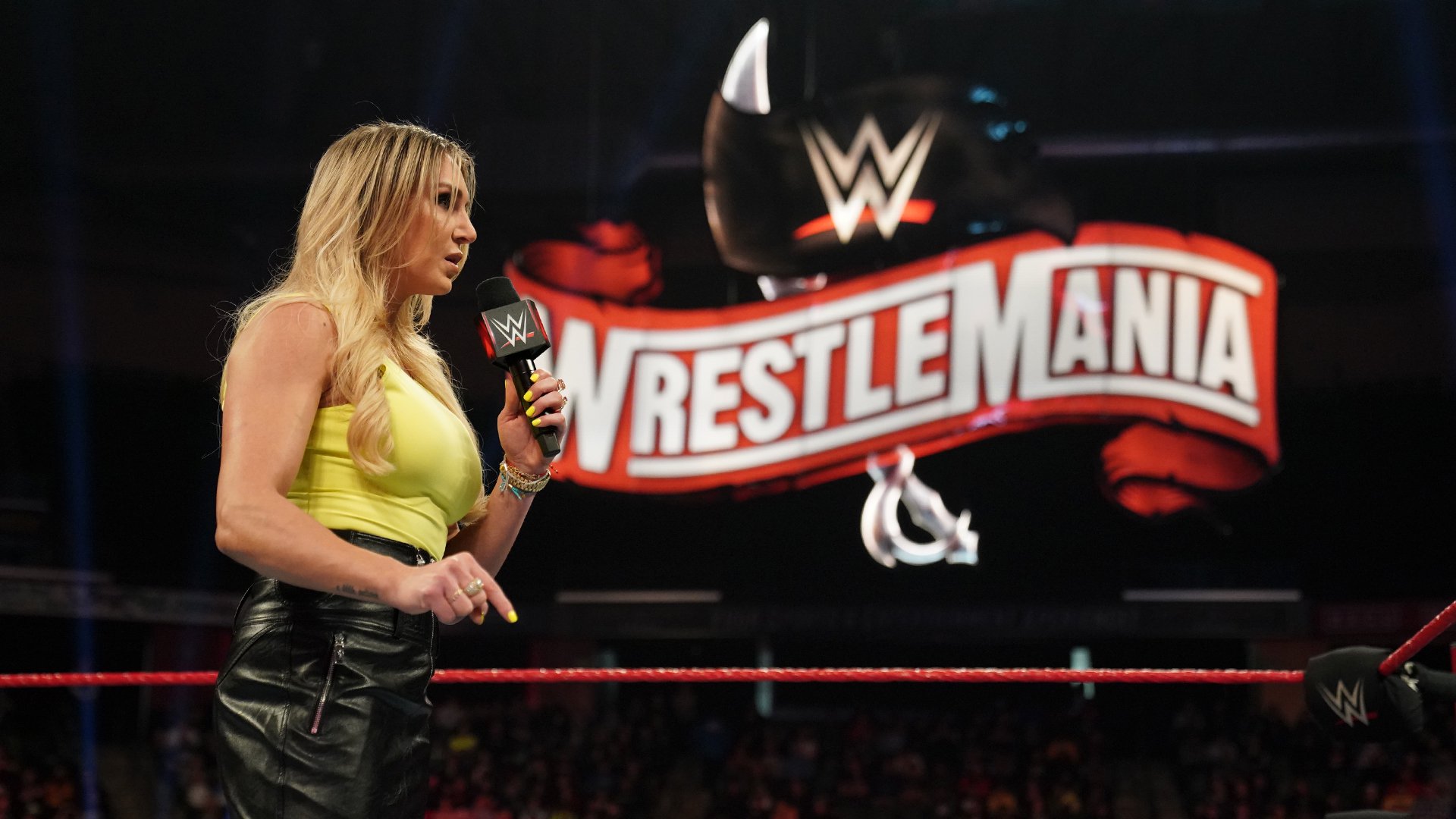 So, it’s official. Charlotte Flair will challenge Rhea Ripley for the NXT Women’s Championship at WrestleMania in a historic showcase for the title The Queen helped make famous. And, if you ask Flair, she’s never gotten the proper credit for that: As Charlotte stated on Raw in an address that was half victory lap for jumping Rhea at NXT TakeOver: Portland and half mission statement for The Road to WrestleMania, she sees Ripley as reaping the benefits of her hard work.

That work, Flair claimed, took NXT from a “warehouse” to WWE’s third brand and put the NXT Women’s Title on the map. As far as Charlotte’s concerned, Rhea’s challenge is little more than misplaced entitlement, and for all The Nightmare’s skills, Charlotte is facing her not as a way to downplay the champion’s accomplishments, but simply to remind Ripley whose shadow she’s standing in, and who made the title WrestleMania-worthy in the first place. 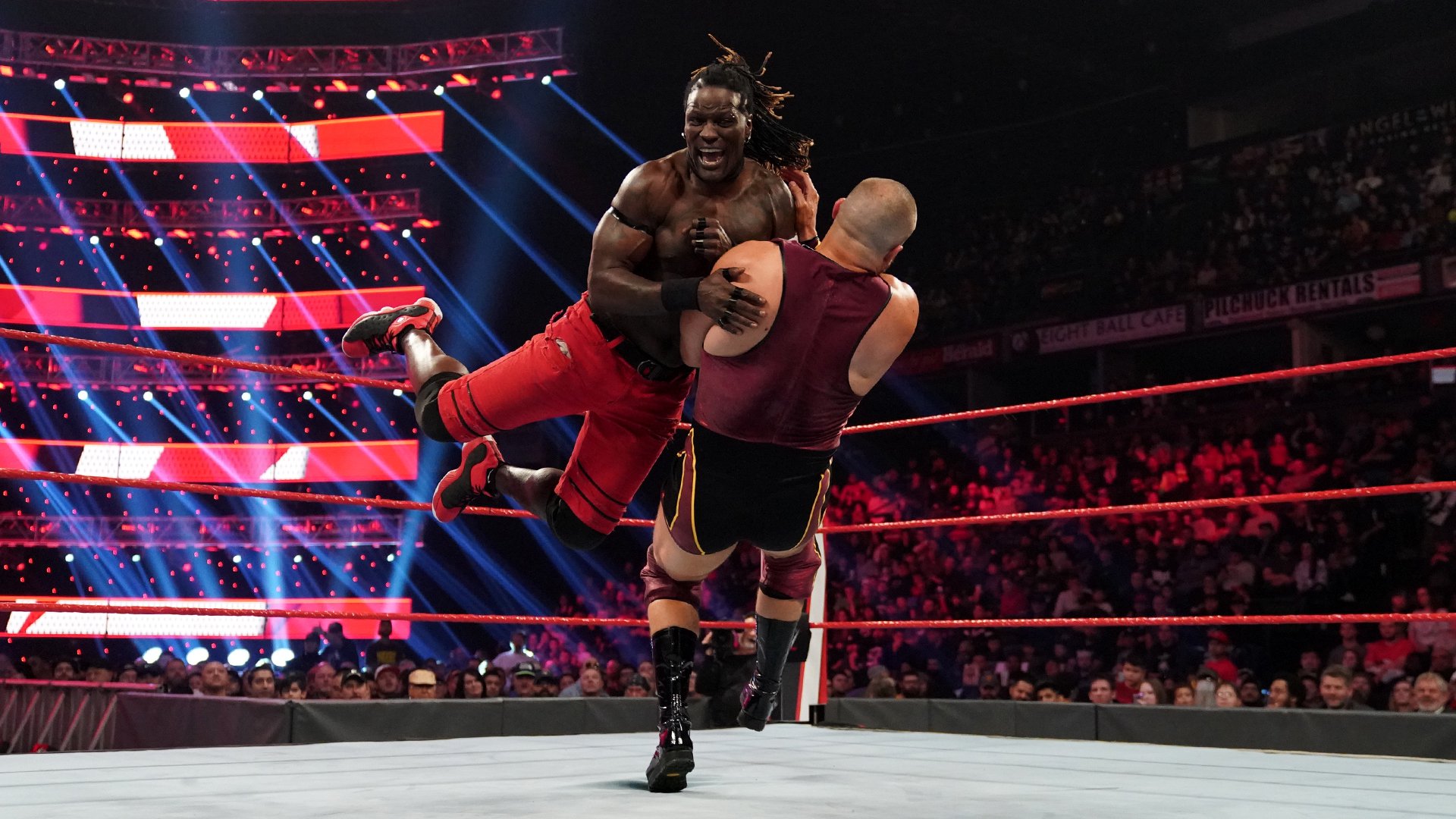 R-Truth made the 24/7 Championship famous through a series of increasingly zany wins and losses. Mojo Rawley tried to revolutionize it by becoming the first-ever fighting 24/7 Champion. Riddick Moss seems to be staking out a middle ground, and surprisingly, it’s working for him.

The current champion, having narrowly escaped an ambush at the Funko factory, defeated Truth and Mojo in a Triple Threat Match to retain his title, pinning Mojo to win the match and fleeing through the crowd to keep his reign safe. While Moss remained out of reach, however, Truth (who channeled “childhood hero” John Cena with a Five-Knuckle Shuffle during the match) merrily dropped Mojo as a final note to the confrontation, a reminder of sorts as to who sets the pace in the 24/7 chase, whether he holds the title or not. 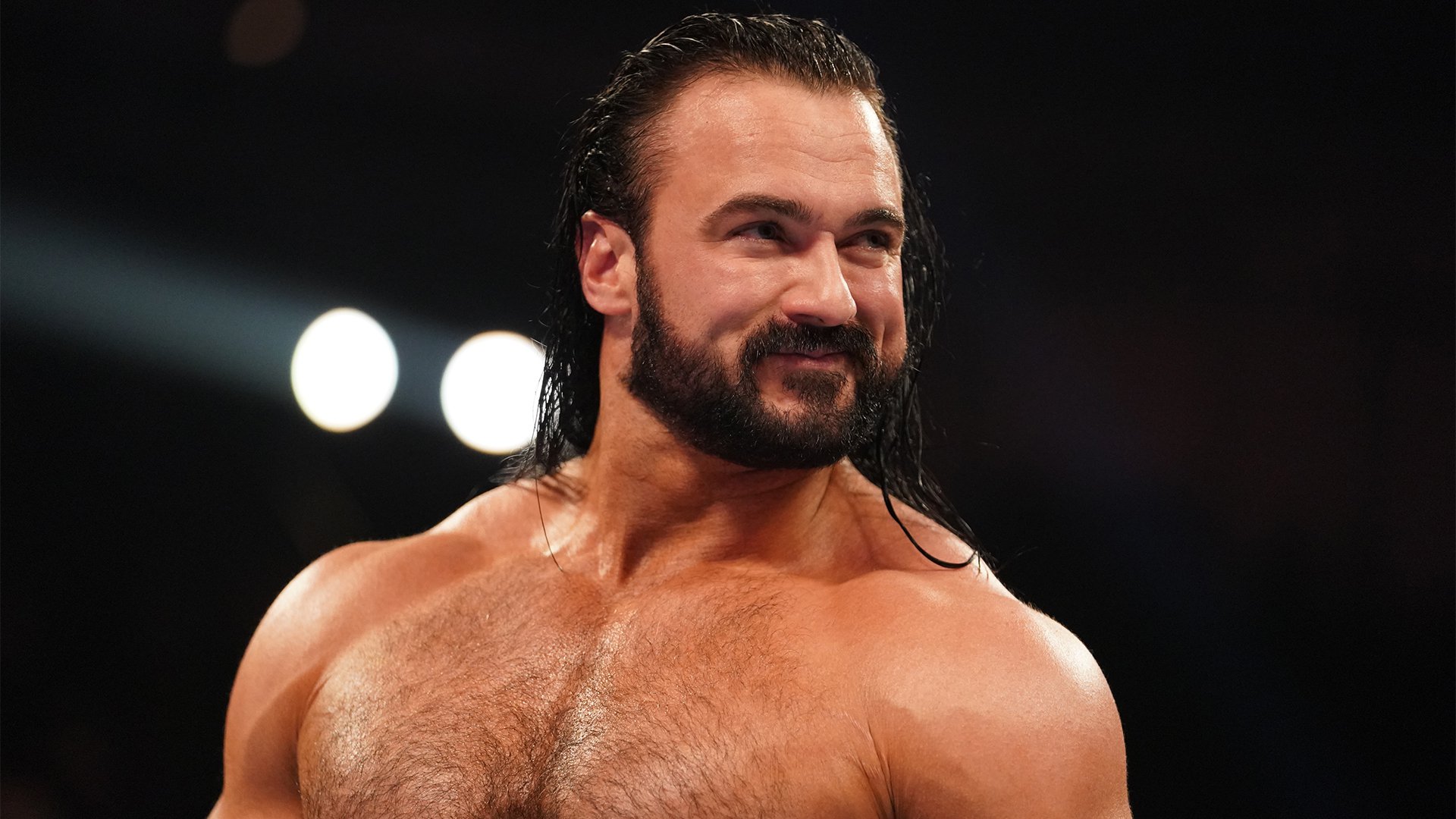 What’s it going to take to stop Drew McIntyre from turning Suplex City into “Claymore Country”? We can cross Paul Heyman speeches and angry rivals off that list, as Brock Lesnar’s challenger merrily batted away a verbal volley from The Beast’s advocate and an attempt by Montel Vontavious Porter to stop McIntyre in his tracks.

Heyman’s usual boisterousness was certainly subdued by McIntyre’s continued defiance, but MVP, who Heyman introduced, was straight-up silenced by a Claymore despite a fiery attempt at “retribution” after getting beaten down during last week’s “VIP Lounge.” Now, while accomplished, MVP is not Brock Lesnar. But McIntyre’s instant victory is no longer an isolated incident, and that spells worry for The Beast. As Heyman knows better than anybody, the one thing more dangerous than someone who knows they’re good is someone who backs it up.

Becky Lynch offers “down payment” for retribution against Baszler 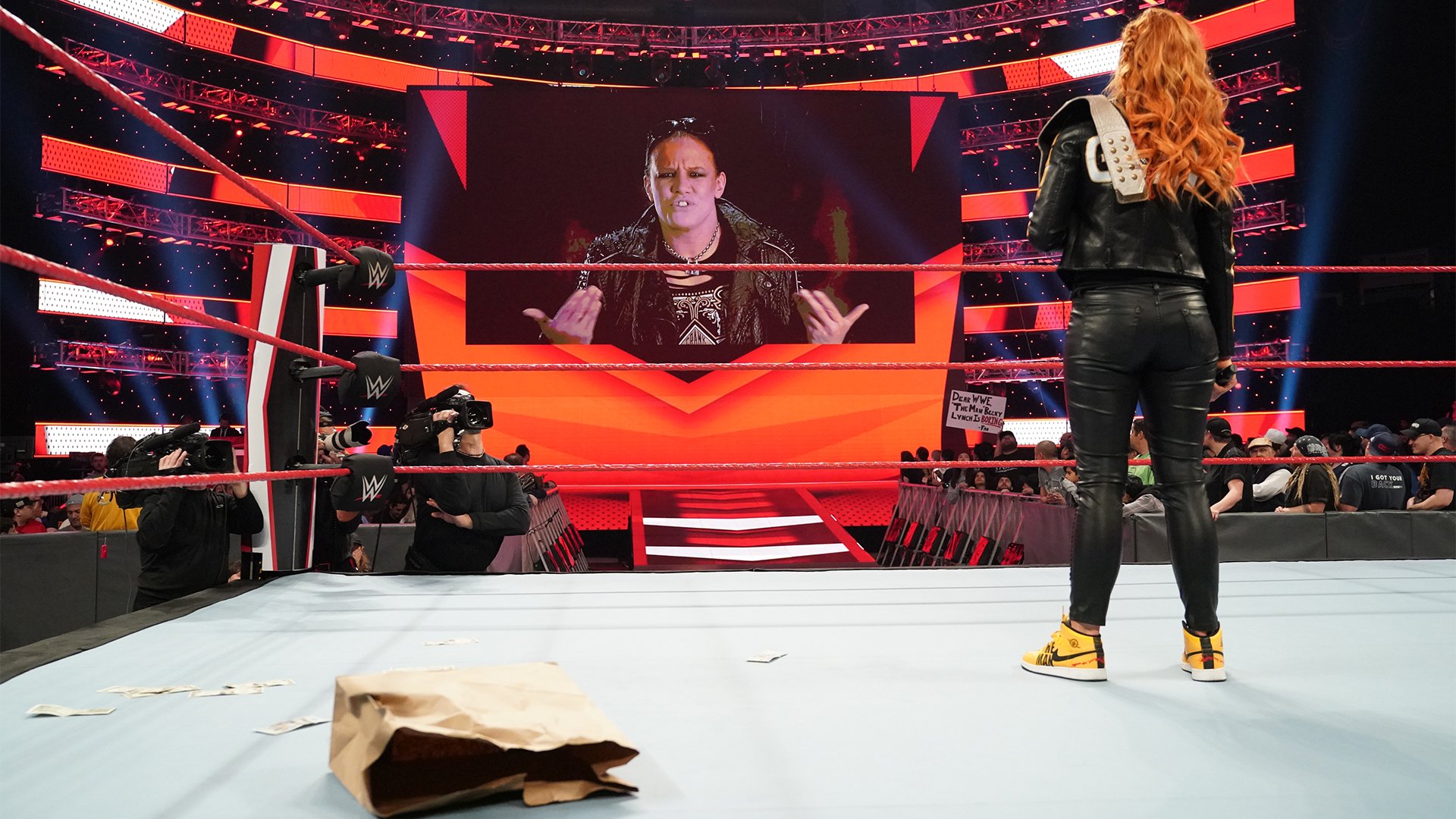 If you didn’t know who Shayna Baszler was before last week, you certainly do now. The two-time NXT Women’s Champion took a literal bite out of Becky Lynch and may end up facing her at WrestleMania, depending on what happens in the Women’s Elimination Chamber Match. As far as Becky’s concerned, that’s fine with her.

The Man came to Raw with yet another symbolic gesture in tow — she dumped a literal bag of money in the ring as a down payment for future fines she’ll incur for whatever she does to Baszler — but The Queen of Spades wasn’t sweating the idea of facing Lynch. Quite the opposite, actually. She called the Elimination Chamber a natural fit for a cagefighter like herself and promised to “tear the living ****” out of Becky should she find herself opposite The Man at WrestleMania. As for Becky? She’s clearly hoping Shayna gets the chance to do just that; whether it’s WrestleMania or not, a match between these two seems like it’s just a matter of time. 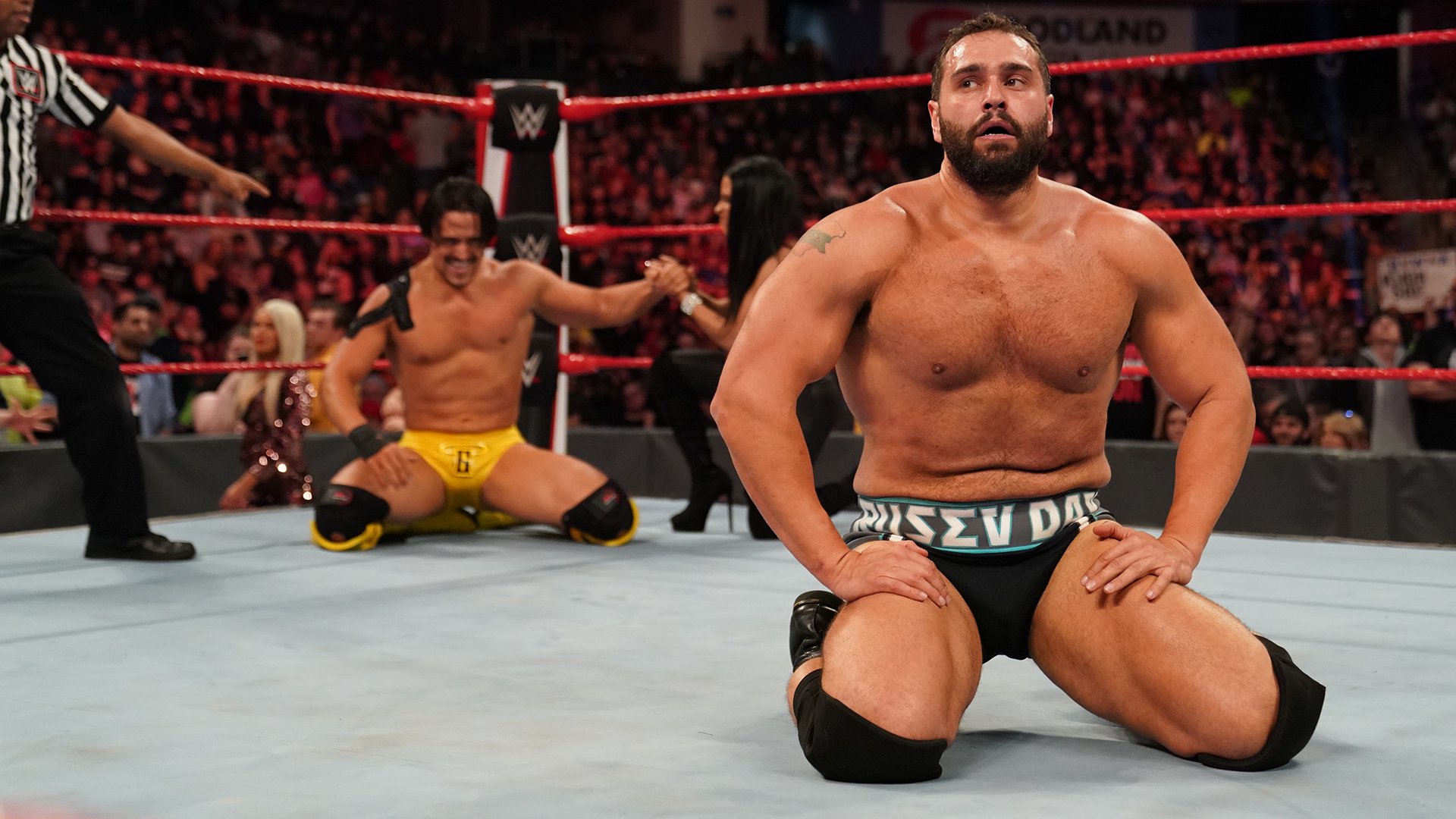 Whether Angel Garza and Bobby Lashley’s impromptu tag team constituted a double-date with Zelina Vega and Lana is up for debate. Either way, it was a rousing success, as the former NXT Cruiserweight Champion and two-time Intercontinental Champion stole a win from Rusev & Humberto Carrillo in a furiously-paced battle on Raw.

The hits kept on coming, and Garza stole both the show (he got a peck on the cheek from a smitten fan) and the match, pinning Rusev with a handful of tights. With Rusev and Lashley poised to reignite their rivalry in the Tuwaiq Trophy Match, The Bulgarian Brute has a chance to pick himself up off the mat yet. For Garza, however, the momentum is strong, and the ceiling is nowhere in sight. 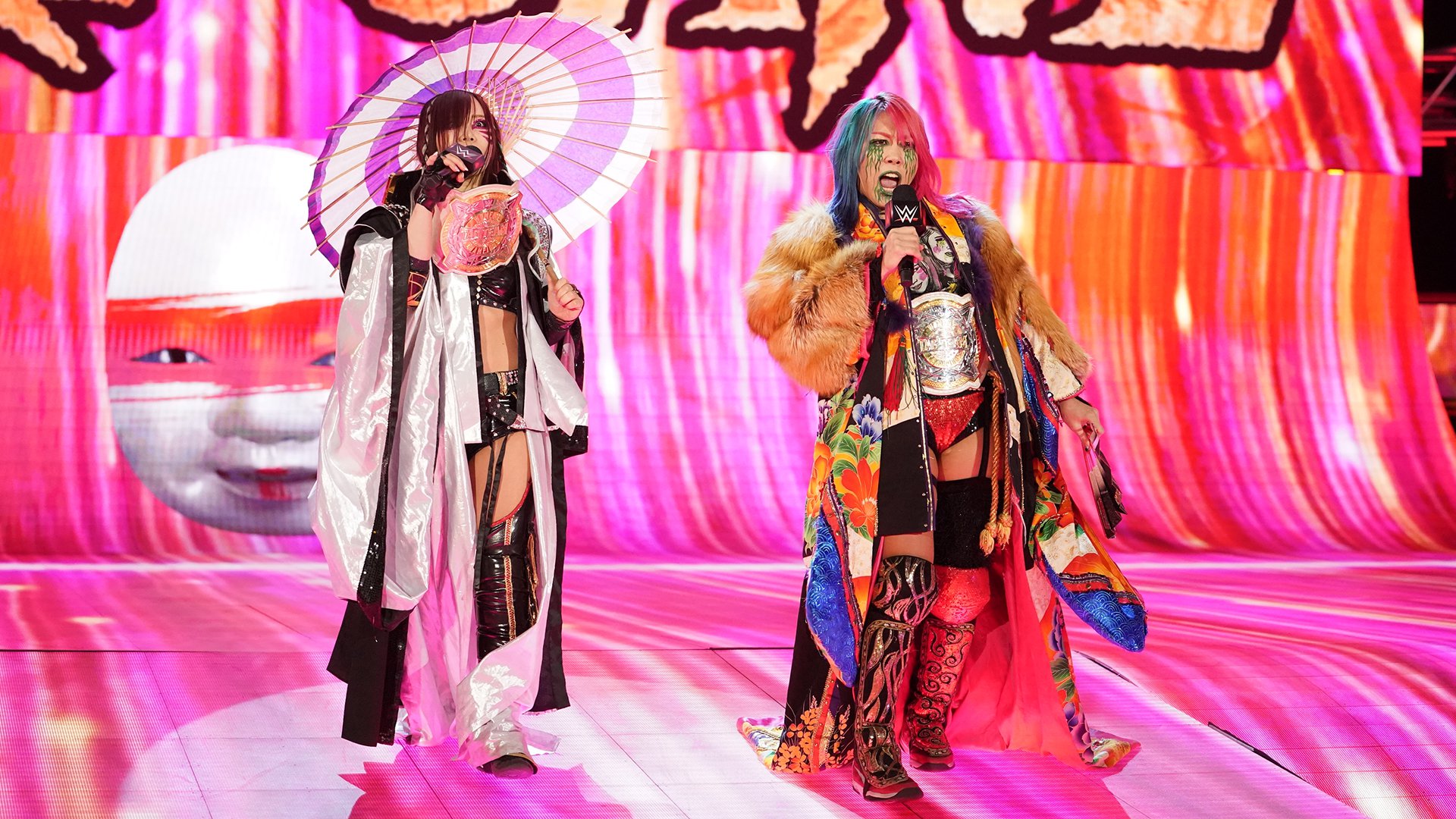 A couple of weeks ago, Asuka left Natalya with a black eye en route to a Raw Women’s Title Match with Becky Lynch. This week, she added insult to injury by costing The Queen of Harts a match against Kairi Sane, a move that could bode ill for Natalya’s chances against Asuka inside the Women’s Elimination Chamber.

The specter of that match hung over Natalya vs. Kairi — Asuka explicitly promised to defeat Natalya in the cage and barked instructions at her partner from the corner. Most crucially, however, she got involved, blasting Natalya with a kick on the outside that dropped the former SmackDown Women’s Champion to the mat, leaving her incapacitated long enough for Kairi to earn a count-out win. Like she says: Easy peasy. 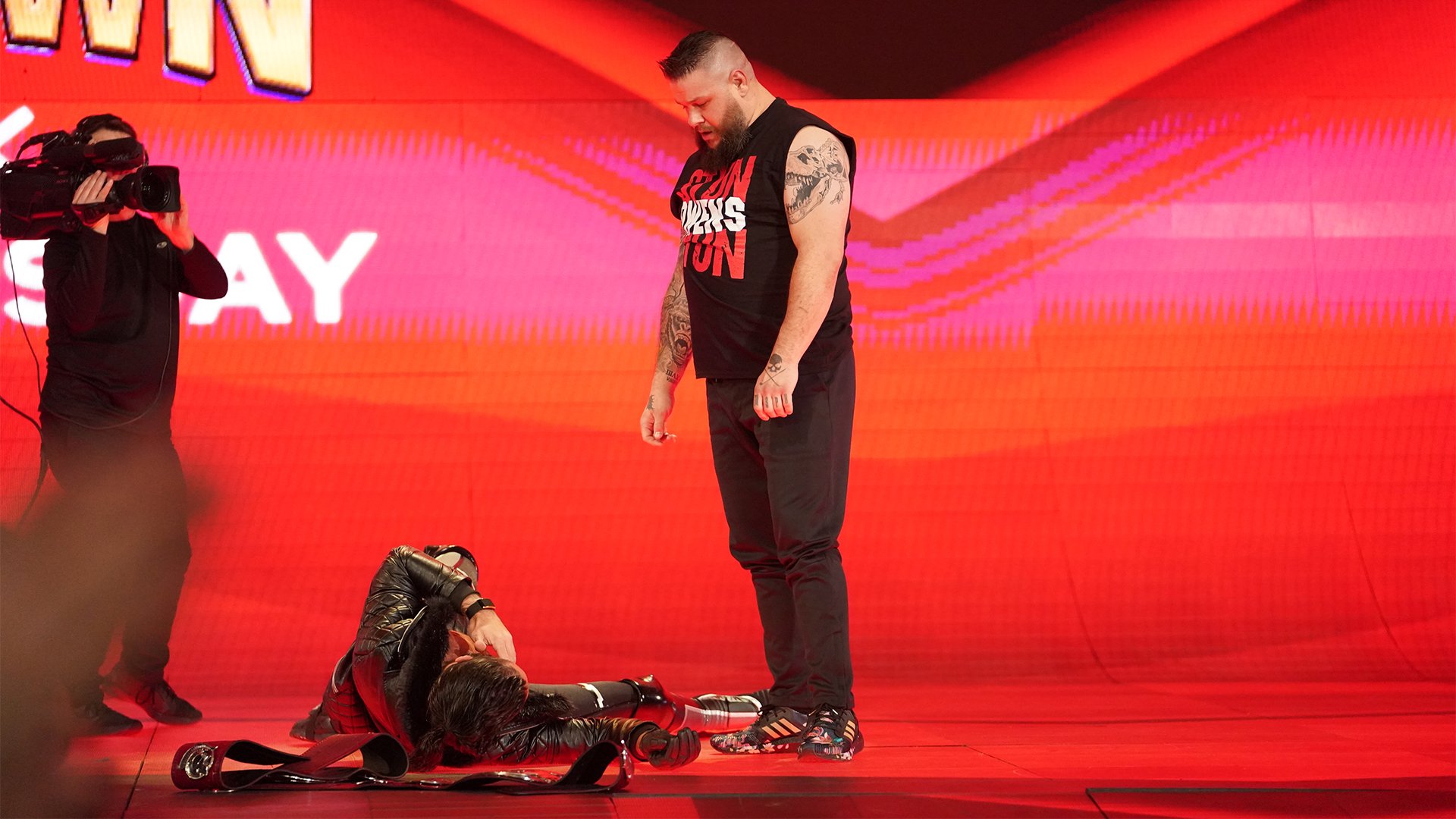 Seth Rollins revealed his gospel on Raw — seek out the weak, rehabilitate the flawed and eradicate the noncompliant — but The Monday Night Messiah’s kickoff of “Phase Two” of his movement may have been slightly premature.

Rollins found himself waylaid during his first-ever “sermon” by the same Superstars he claimed to have vanquished, with The Viking Raiders storming his pulpit and kicking off a brawl with Murphy and AOP. While Rollins evaded the fracas, he was still humiliated when Kevin Owens snuck out from behind the curtain and blasted him with a Stunner. It was an act of blasphemy in some circles, but it was also its own declaration of noncompliance, defiance and purpose. Some gospels are more direct than others. 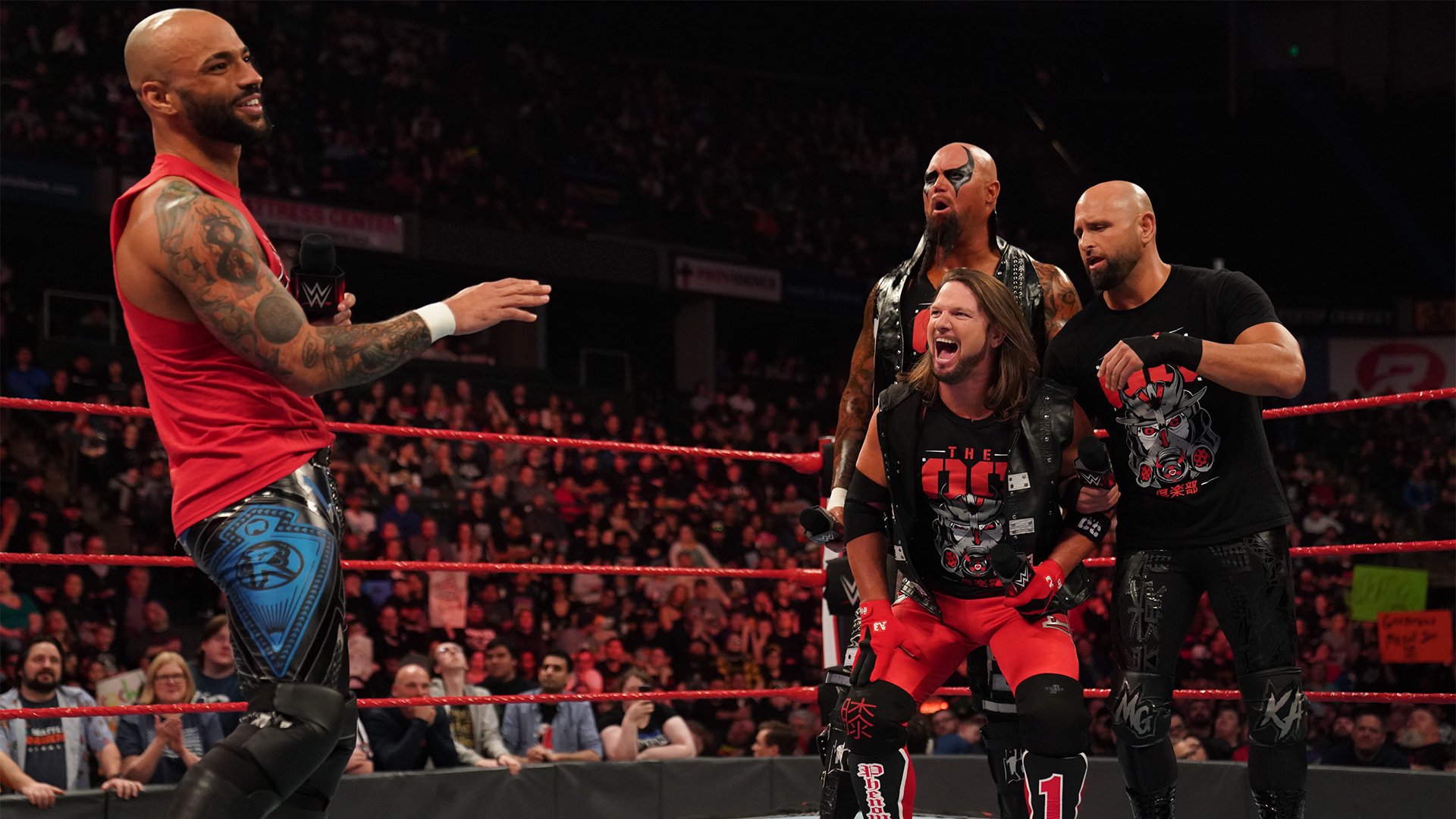 First thing’s first: AJ Styles is back on Raw. But while Styles was as boastful as ever — we do believe he called himself the best Superstar of any era, ever — Karl Anderson lost to Ricochet in an impromptu match that stemmed from a confrontation between The Phenomenal One and Ricochet, the latter of whom is about to challenge Brock Lesnar for the WWE Title at WWE Super ShowDown.

As far as AJ’s concerned, Ricochet doesn’t deserve that match, but Anderson ran interference rather than “Uncle Allen” square up with an opponent he felt was unworthy on his first night back. Anderson’s strategy ended up backfiring; Styles and Luke Gallows were ejected for ringside interference, and Ricochet pinned the solo Anderson to spoil The O.C.’s big night. And for all Styles’ insistence that he can hang with the Legends of the past, tonight was as clear as any that the road to immortality can’t be traveled in a single evening. 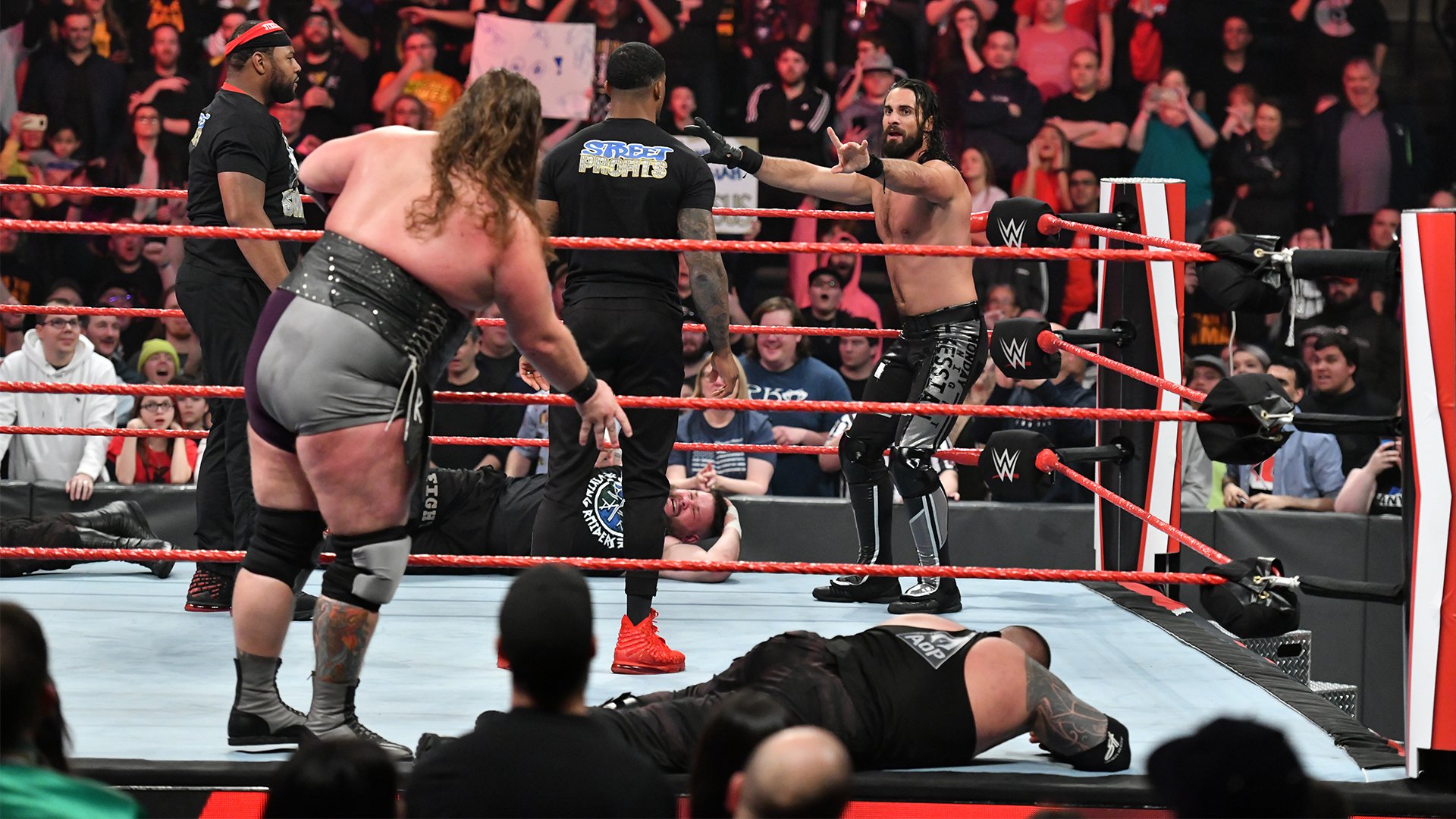 For Seth Rollins’ movement to work, he claims the noncompliant must be eradicated, but despite The Monday Night Messiah’s attempt to “crucify” Kevin Owens in the closing moments of Raw, his disciples found themselves surprised by Profits of a different kind.

Rollins broke up a pinfall after Owens dropped Murphy with a Stunner, which got his disciples disqualified and handed the win to the “nonbelievers” in a Six-Man Tag Team Match, and he followed up by having his minions hold Owens down for what he called a “crucifixion.” Instead, he was cast down by the arrival of The Street Profits, who overwhelmed The Messiah’s men with the help of Owens and the Raiders. Raw ended with two dueling, striking images — Montez Ford and Ivar executing dueling Frog Splashes, and Rollins falling to his knees in anguish as his enemies grew and his followers fell, the threat of his own eradication growing exponentially by the second.