Braun Strowman lashed out on The O.C. following his disqualification against United States Champion A.J. Styles.  Earlier, Sasha Banks continued her rampage vs. Natalya in her first match since Wrestlemania. 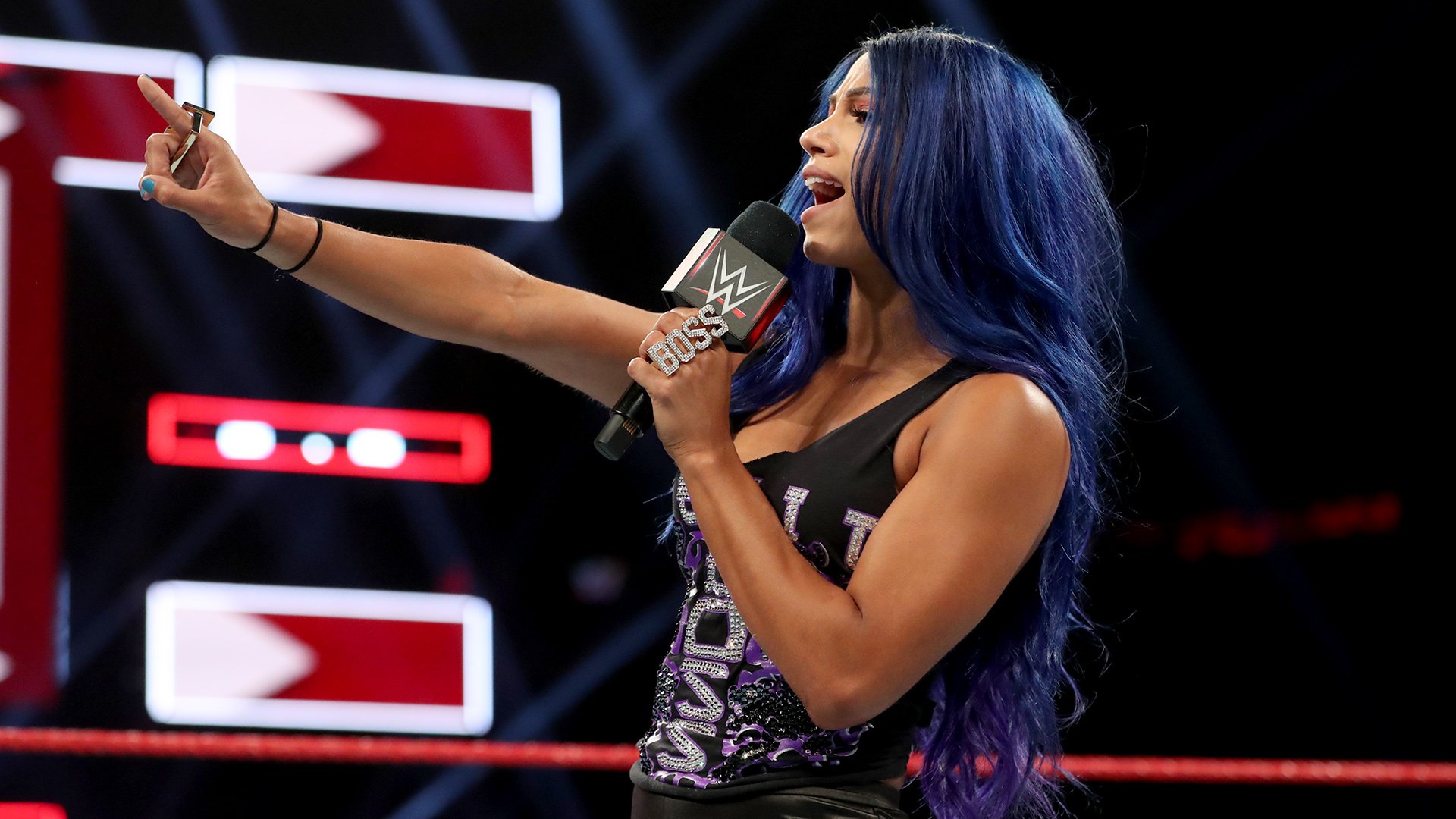 NEW ORLEANS — For four months, Sasha Banks was conspicuous by her absence, her name in the streets even as she stayed out of sight and minded her own business in the aftermath of WrestleMania. And, in her first significant turn on the mic since her return two weeks ago, The Boss took the opportunity to correct — and confirm — a few blind items that persisted since her departure. Yes, she “threw a fit” at The Showcase of the Immortals; yes, she cried on the locker room floor; and yes, she took her ball and went home. The why, however, was far from what was rumored.

The reason The Boss was so despondent was because she’d been “relegated” to a tag title match she didn’t care about, defending titles she didn’t care about, while Becky Lynch got the main-event spotlight against Ronda Rousey and Charlotte Flair. To reclaim the spotlight, Sasha knew she needed a “perfect plan,” which is why she picked a precise moment to heinously ambush the grieving Natalya two weeks ago. And even though Becky Lynch came to save the day, The Boss’ mission was accomplished: She had the WWE Universe’s attention, she had the spotlight and she had all the “glory” she deserved.

Natalya’s arrival somewhat rained on Banks’ parade, as The Queen of Harts sprinted toward the ring and began trading haymakers with Sasha at ringside. The Queen of Harts’ vicious throwdown showed The Boss that she isn’t quite as impervious as she thinks. Natalya may have gained an edge in advance of her match against Banks later tonight, but it’s hard to believe the fight didn’t play into Sasha’s hands even further: Now, everyone’s talking about her for one more reason.

Was this our first King of the Ring upset? 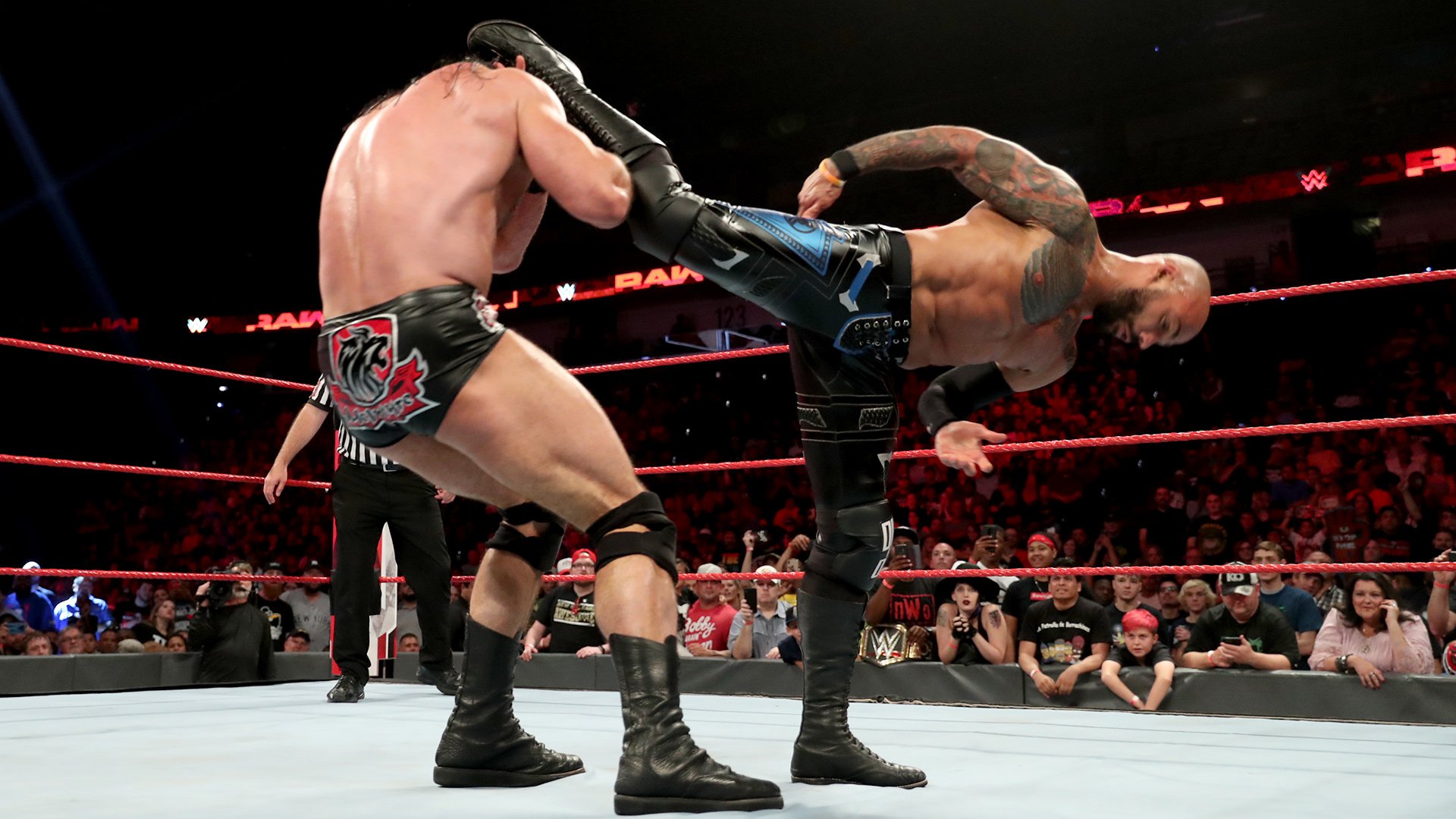 That sound you hear is the busting of brackets nationwide. Drew McIntyre is out of the King of the Ring tournament, having been handed a first-round exit by Ricochet that, while not exactly an upset per se, isn’t necessarily not not an upset, either: The Scot had been reasonably tabbed by anyone with a working pair of eyes and ears as a favorite to win it all, while Ricochet’s size difference rendered him something of a longshot in prognosticators’ eyes, at least for this match.

That McIntyre was visibly buying into his own hype didn’t necessarily doom him — yes, he pompously sat on the King of the Ring throne and waved the scepter around before the match, but he also thoroughly manhandled his opponent in the early goings. The bout was looking like a textbook example of a Superstar talking the talk and backing it up; McIntyre had an answer for everything, and the former United States Champion was forced to improvise his way out of the Scotsman’s various traps.

Luckily for Ricochet, chaotic improvisation is where he lives, and all he needs is a single opening. The high-flyer stopped McIntyre cold with a Recoil off the turnbuckle, leaving his towering foe down long enough to set up and execute the 630 for the win. And with a favorable matchup against Samoa Joe looming — remember, Ricochet beat him for the U.S. Title — the high-flyer is suddenly looking like a favorite himself, and that Twitter handle is one step closer to becoming a reality. 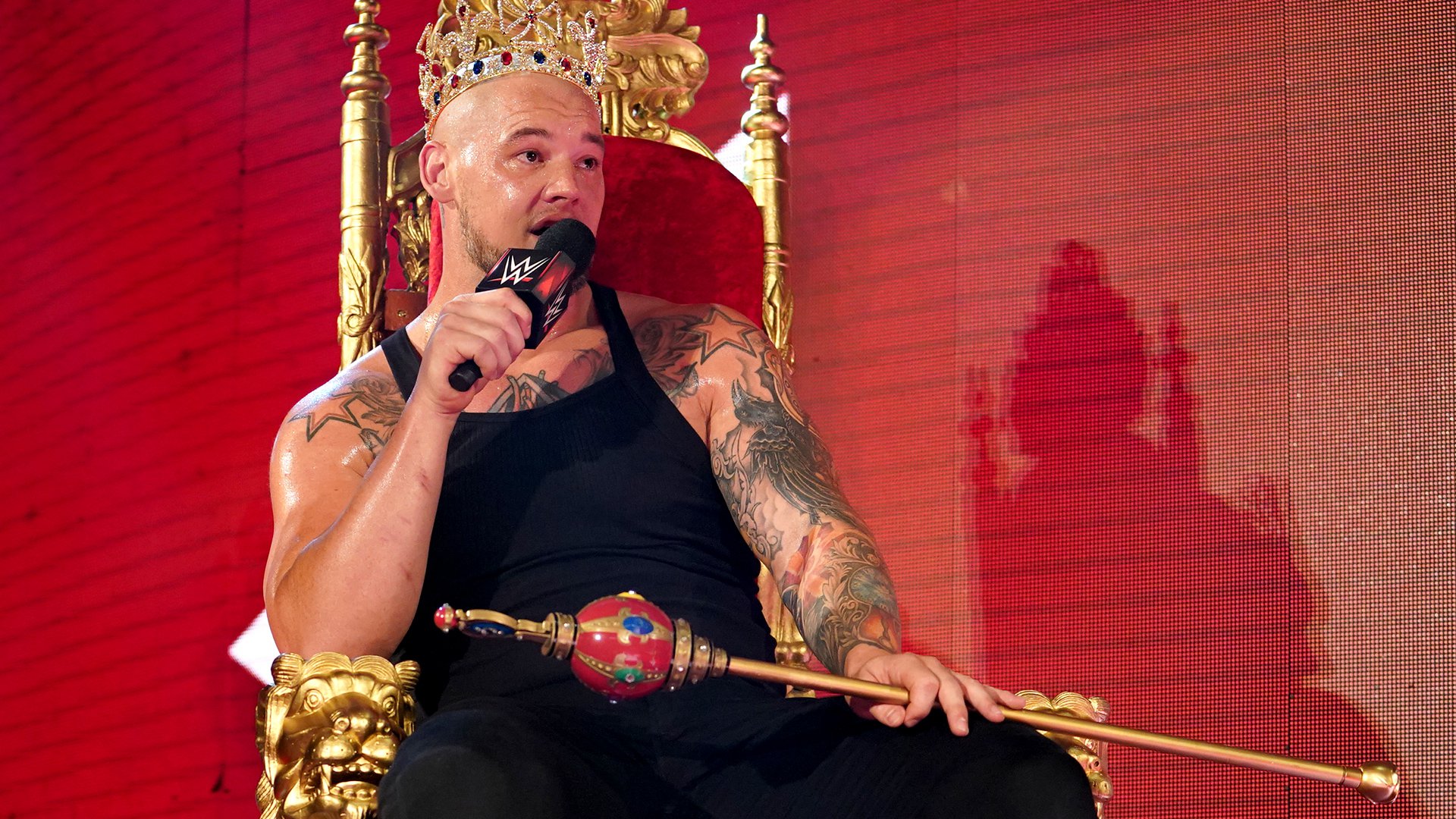 King Corbin. Say it. Savor the words like a fine vintage, or spit it out like swill if you prefer; but get used to the idea either way, because Baron Corbin is still in the King of the Ring tournament. Not only that, but there is a very real chance he makes a deep run, leaving The Miz in the rearview to land himself a matchup against Cedric Alexander in the quarterfinals where Corbin holds the size advantage.

That’s likely awful news for everyone in the WWE Universe who continues to clamor for Corbin’s humiliation, but little more than fuel for The Lone Wolf, who has made a career off of upsetting his legions of boo-birds. As for The Miz, his burning desire — “I want it all” — got him to the cusp of victory but no further, as Corbin kicked out of the Skull-Crushing Finale and caught Miz off a springboard with the End of Days. And yes, Corbin putting on the King of the Ring crown and lounging back on the throne surely rankled a few feathers, as did his sneering insults of the commoners who besmirched his name in a digital poll. But, as always, that mattered not to him: The king can do as he likes. Baron Corbin’s just getting a head start. 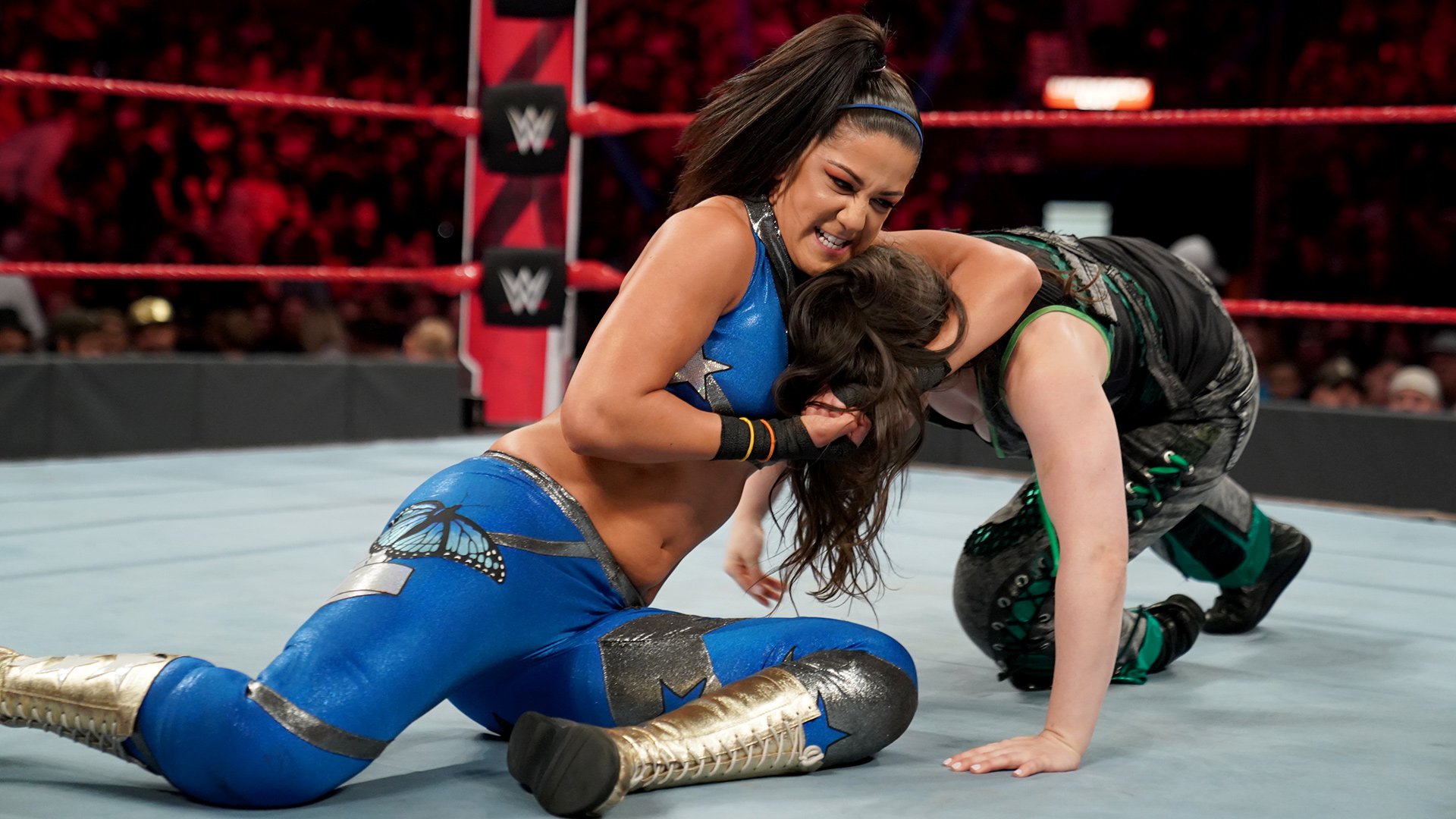 Is Bayley biting off more than she can chew by defending the SmackDown Women’s Title against Charlotte Flair at Clash of Champions? The answer, at least on Raw, is that she might have a better chance than the naysayers think: The Huggable One knocked off another titleholder, WWE Women’s Tag Team Champion Nikki Cross, in a match that quickly turned into a knock-down war of attrition. Bayley broke the stalemate with a top-rope elbow drop and perhaps reminded the WWE Universe about her history as she marches toward Charlotte: When she bets on herself, she tends to win. 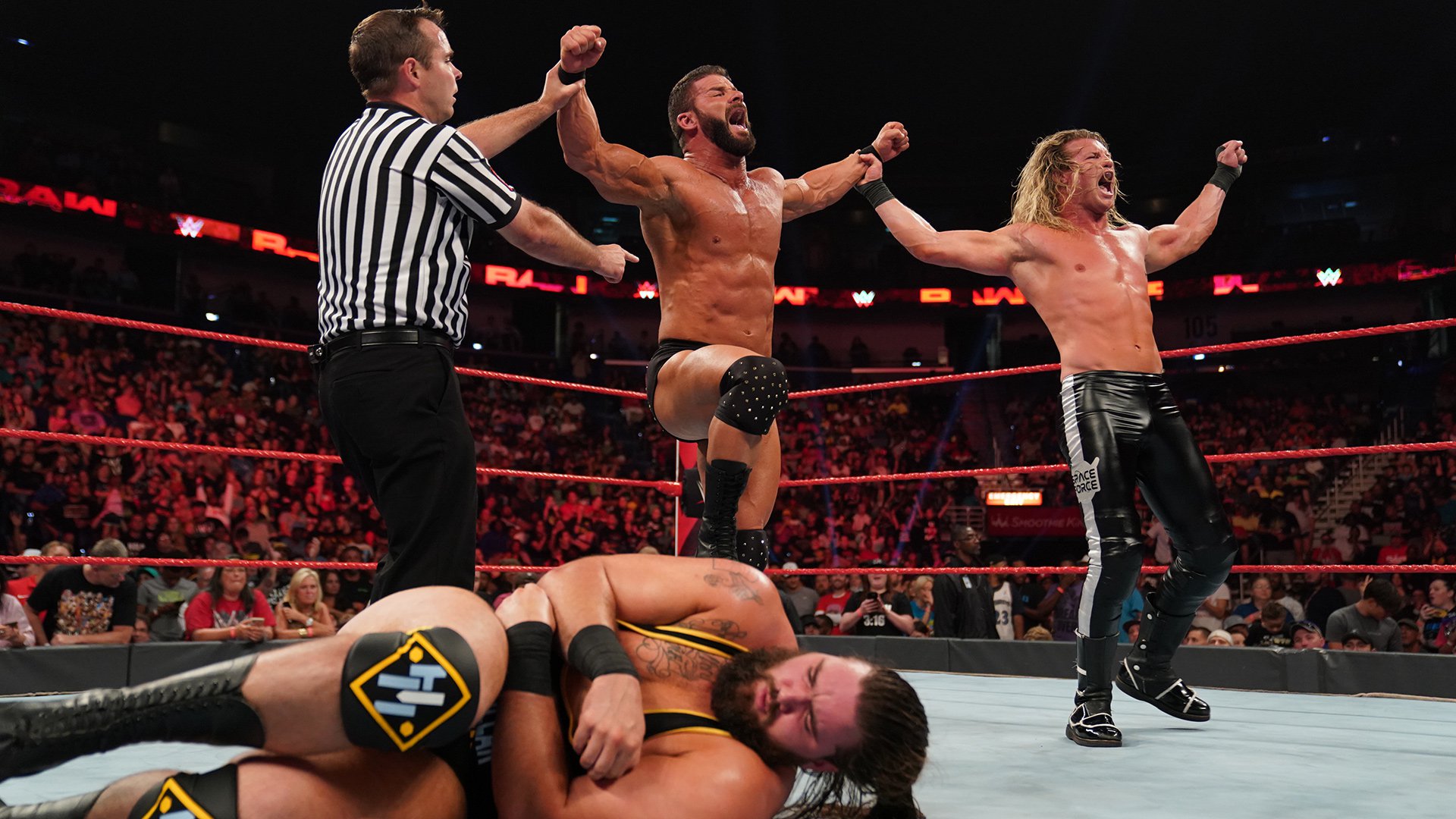 Dolph Ziggler & Robert Roode are now next in line to challenge Seth Rollins & Braun Strowman for the Raw Tag Team Titles. And if that sentence isn’t strange enough — these two have been a tag team for a grand total of one night — consider how they got the nod in the first place: Winning the largest Tag Team Turmoil Match in Raw history and outlasting a field that included The O.C., The Revival, Zack Ryder & Curt Hawkins, The B-Team, Lucha House Party, The Viking Raiders and Heavy Machinery. That’s four former tag team champions, one team of unpredictable veterans and two pairs of hosses. In terms of big wins, we’ve gone past glorious and entered the realm of the miraculous.

And yet, nobody can say it wasn’t earned: The Viking Raiders’ early win over The B-Team was nullified by a double-disqualification against The O.C., leaving Ziggler & Roode with the benefit of a clean slate. They made good on that chance, running the table against The Lucha House Party (superkick to the back of Gran Metalik’s head), The Revival (Glorious DDT to Scott Dawson) and Ryder & Hawkins (superkick to Ryder) to bring it down to the wire against Heavy Machinery.

They played that matchup perfectly, too, isolating Tucker with a two-on-one assault designed to keep Otis from getting into the match. When Heavy Machinery turned the tables and set up the Compactor, Ziggler struck, Zig-Zagging Otis on top of Tucker to set him up for a Glorious DDT. As unlikely a victory as ever, and given the chemistry shown tonight, it might not be the last. After all, Ziggler & Roode aren’t so far from Rollins & Strowman, who were brought together by happenstance themselves. This is going to be interesting. 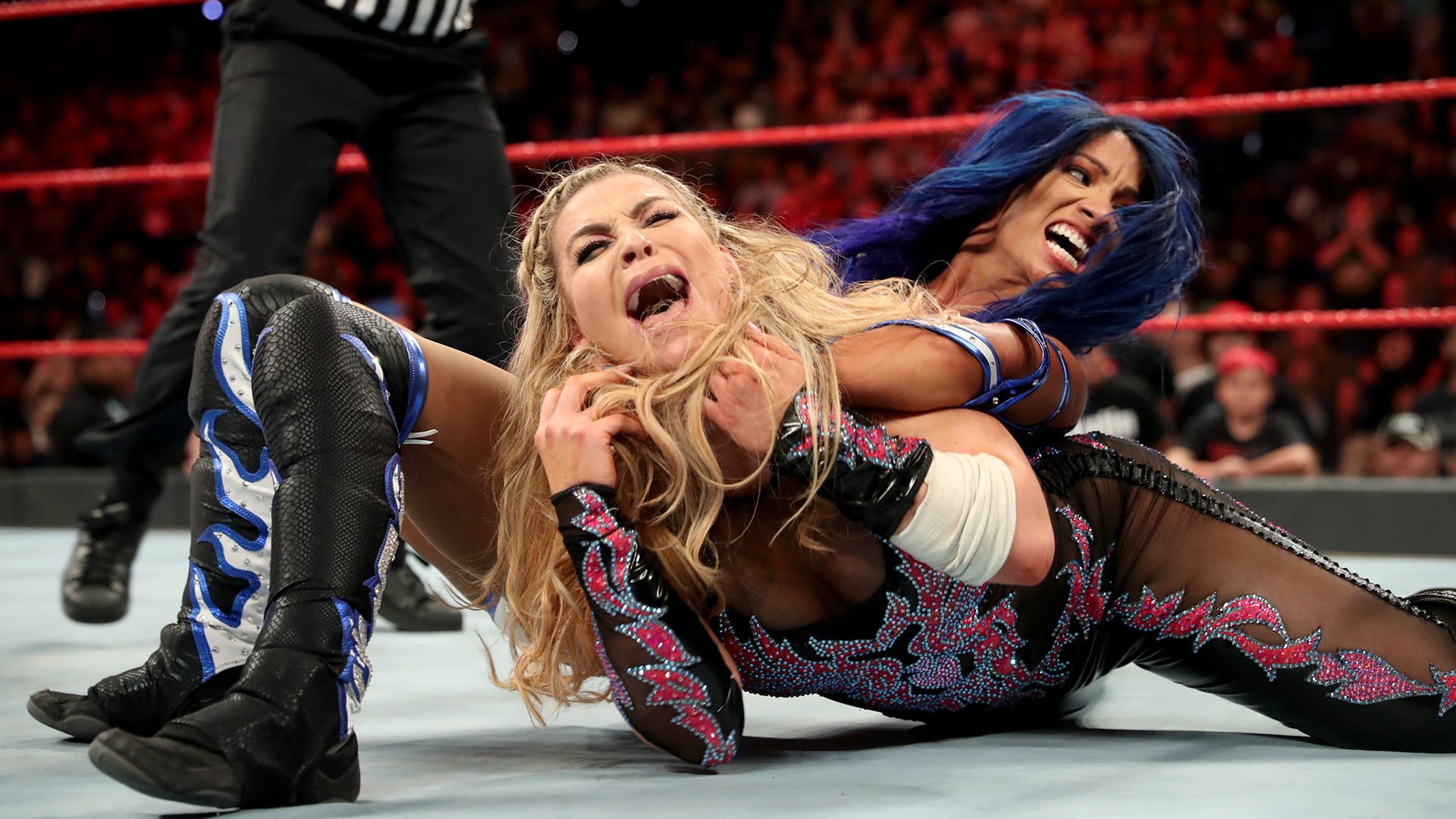 About the best thing that can be said for Natalya in her match with Sasha Banks is that she refused to go down without a fight or to wait for her injured arm to heal before she tried her hand against The Boss for the sake of her own pride and the pride of her family. The decision cost her greatly, but at least she was able to leave Raw secure in the fact that she did not let Banks’ insults stand.

Unfortunately, that’s also probably the worst thing that can be said for the match as well. It was painfully apparent that the clipped-wing The Queen of Harts was facing an uphill battle against the healthy Banks, especially after The Boss repeatedly slammed her arm into the ring post. Natalya certainly made it interesting against the “snake” who insulted her, but her injured arm left her unable to apply the Sharpshooter, and The Boss capitalized, locking in the Bank Statement and using that same arm as a leverage point against Natalya’s throat.

The returning former champion didn’t hesitate to add insult to injury after the match, trapping Natalya in yet another Bank Statement just for kicks. Michael Cole was at a loss for words as he tried to determine why a star as accomplished as Banks would “stoop” to savaging Natalya in such a manner when she had already claimed the victory. The question might just answer itself: Clearly, when it comes to Sasha Banks, the submission was nice, but statement was the point. And as long as people are talking, she wins. 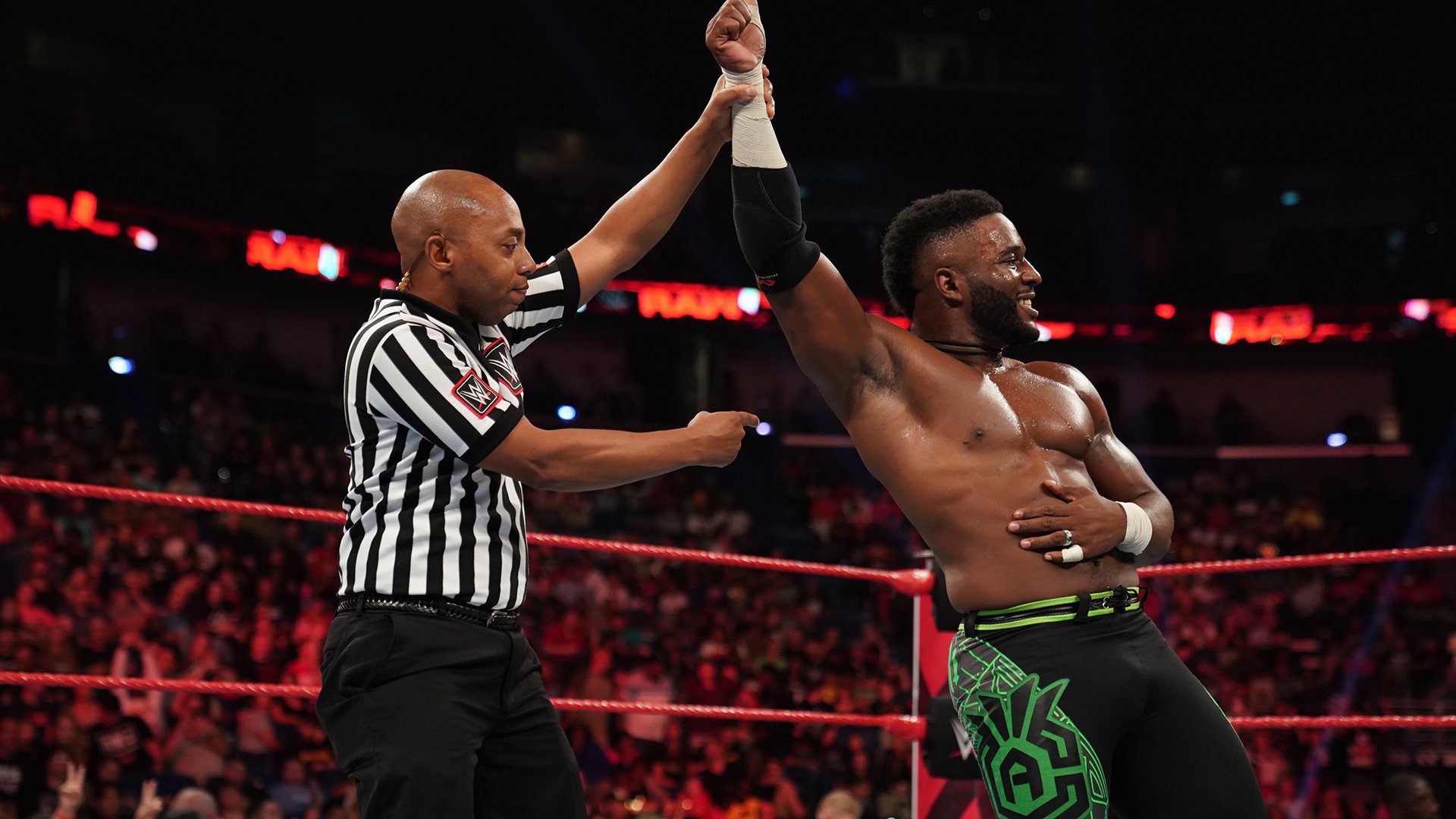 In his very first match as a Raw Superstar four months ago, Cedric Alexander fought the good fight against Cesaro and came up short. The tables turned in their latest matchup, and it was The Swiss Cyborg who found himself taking the L … though not before he gave Alexander a parting gift that may well haunt the former WWE Cruiserweight Champion down the stretch of the tournament.

Alexander was looking to keep his sea legs before the King of the Ring quarterfinals, and Cesaro was attempting to regain his after a first-round ouster at the hands of Samoa Joe. But long-term consequences also came into play, thanks to Cesaro’s ruthless attack on Alexander’s knee and ankle. Alexander powered through the pain, catching The Swiss Cyborg with a Lumbar Check out of nowhere, but the wisdom of that strategy may be up for question: Baron Corbin now has a big fat target that he won’t hesitate to exploit during the quarterfinals next week. Clearly, however, heart goes a long way, and unless that gives out, Alexander’s got a fighting chance. 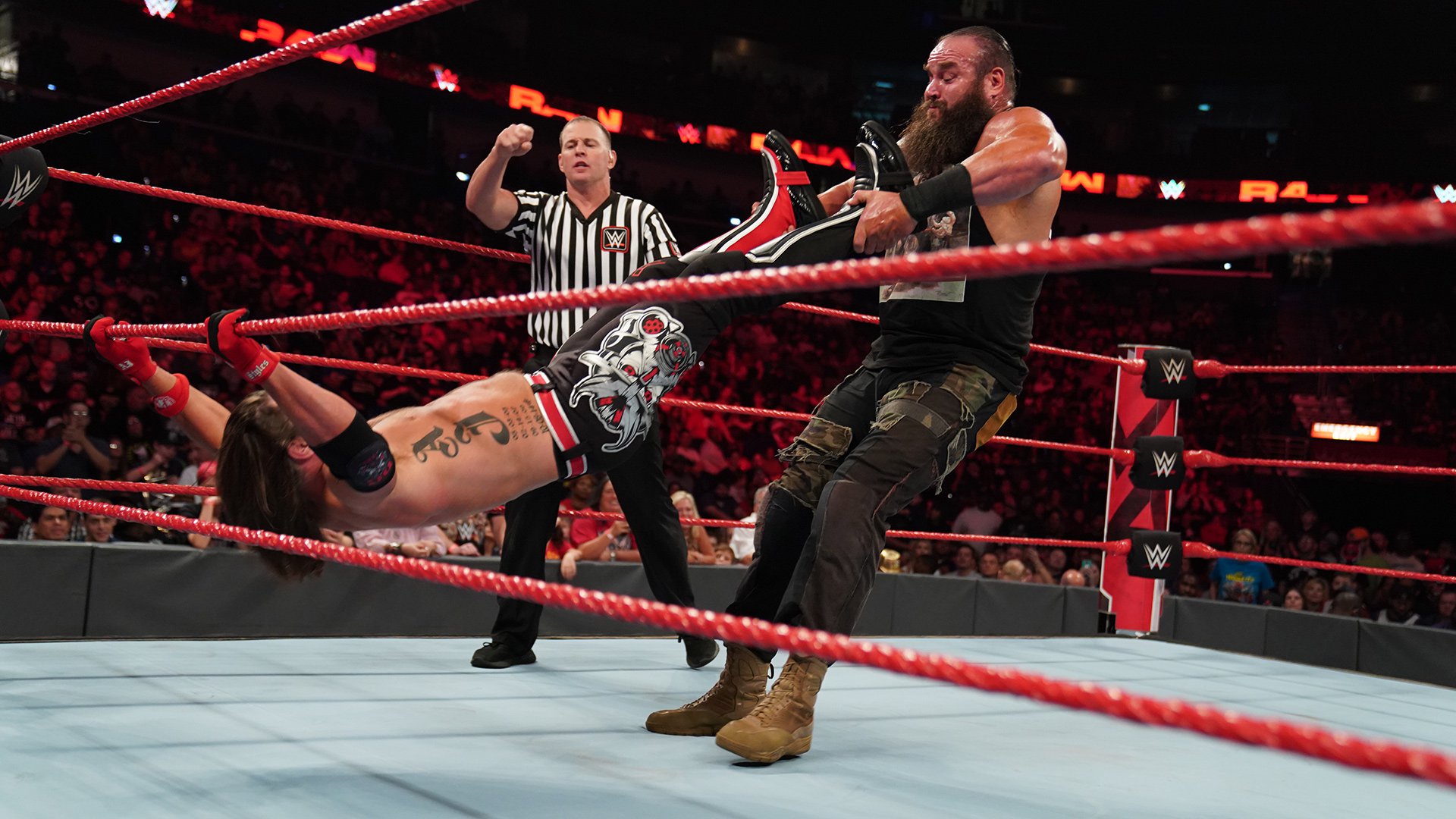 If not for a truly chaotic series of events, Braun Strowman would have a United States Championship to go with his Raw Tag Team Title right about now. Unfortunately, disaster struck during The Monster Among Men’s title rematch against AJ Styles, and The Phenomenal One staggered out with Old Glory by virtue of a disqualification win — though Strowman made sure the walk back to the locker room would be a painful one indeed.

Things had progressed much as you might expect — Styles targeted Braun’s base with a Calf Crusher; the big man shook it off — until Braun crashed headlong into referee Chad Patton, sending him tumbling to the outside. Styles took advantage with a thumb to the eye and a low blow, with the rest of The O.C. running interference and putting the boots to Strowman. Braun shook that off, too, beating back Luke Gallows & Karl Anderson singlehandedly — no Seth Rollins, no problem — before whaling on all three with the chair. Unfortunately, Patton came to right at that exact moment, having heard but not seen enough to disqualify Strowman and save Styles’ title. It wasn’t enough to save his hide; Strowman obliterated The O.C. with the chair and a final Running Powerslam to AJ, having to settle for a moral victory instead of a literal one, and one title instead of two … at least for a few weeks.