Asuka gets back to basics against Liv Morgan 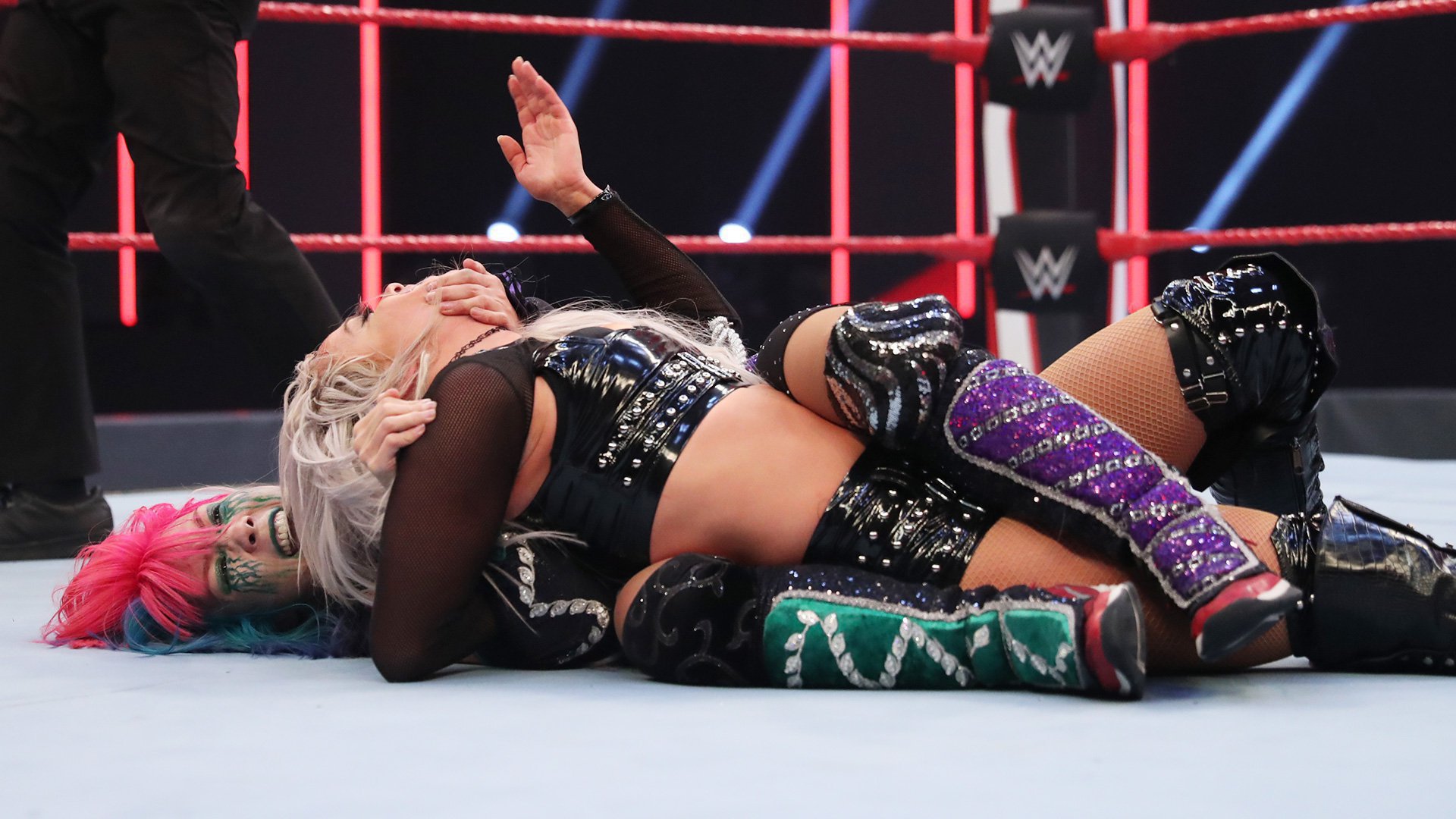 ORLANDO, Fla. — Asuka lost the WWE Women’s Tag Team Titles at WrestleMania, but she may have gained something — or rather, regained something. The Empress of Tomorrow, who had already begun to show flashes of her former unbeatable self, reassumed her original form in a hard-fought match against Liv Morgan that signified the reestablishment of Asuka’s dominance and a bright future for Morgan as well.

Yes, Liv was in this one. Right down to the wire, in fact; the same toughness that took her to a victory over Natalya at WrestleMania Kickoff was once again on display. But like so many women before her, she wasn’t ready, and The Empress of Tomorrow wrangled Liv into the Asuka Lock and muscled her to the ground, smiling gleefully as Morgan submitted. It’s good to see that again. 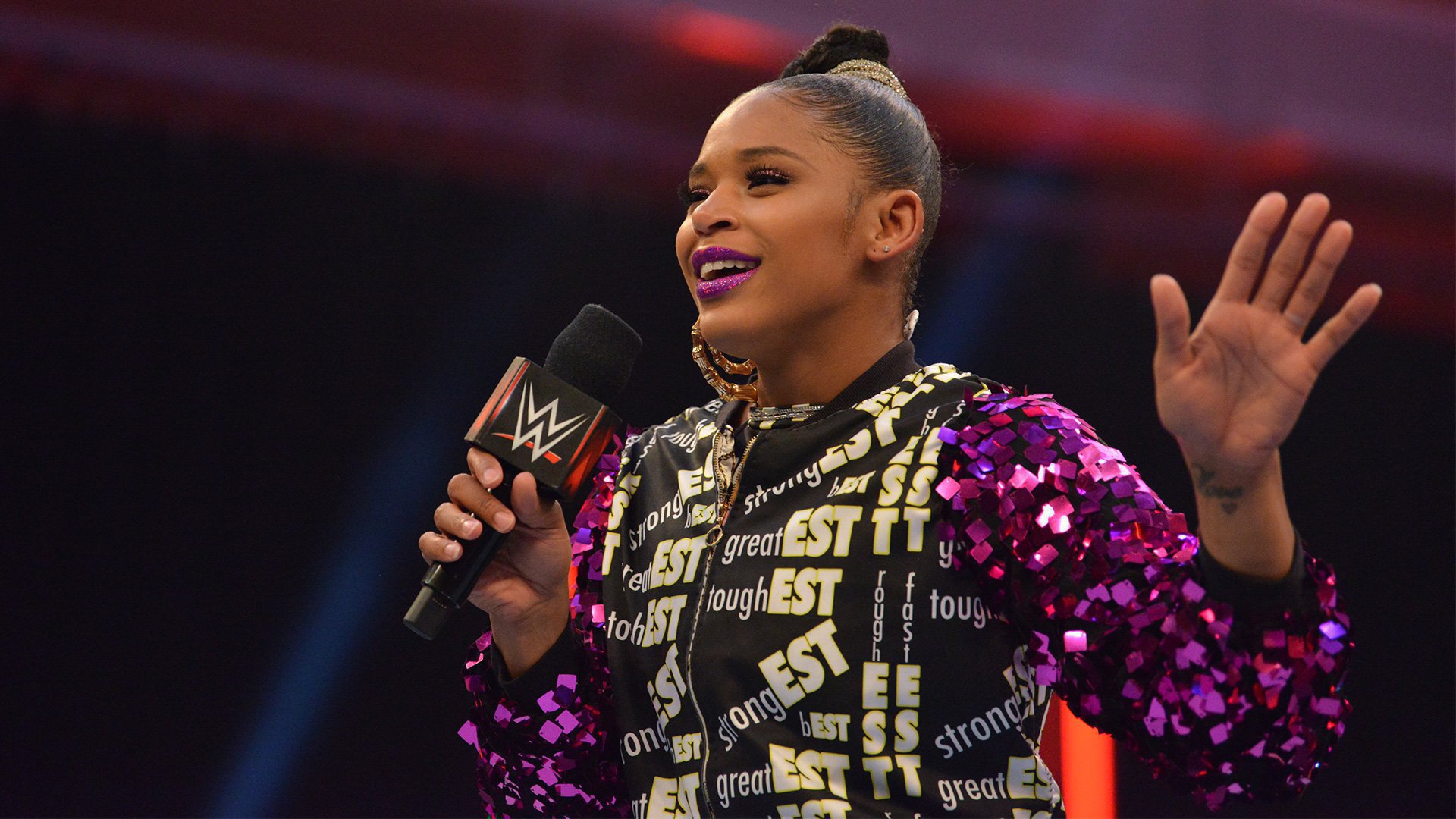 Although they were facing an almost completely-untested team in Angel Garza & Austin Theory, The Street Profits only narrowly retained their Raw Tag Team Titles at WrestleMania. Monday was shaping up to be a far more decisive win, but Montez Ford & Angelo Dawkins were robbed due to an interference that set off a rapid-fire sequence of events involving the duos’ respective enforcers, Bianca Belair and Zelina Vega.

Vega ended the title bout, meddling in the action and getting the match thrown out when the ref caught her red-handed. With the action stopped, La Muñeca was free to tee off on the Profits, but Belair once again came to the rescue, driving off Vega and issuing a then-and-there challenge that also upended Raw’s Women’s division with a single sentence: “I go here now.” 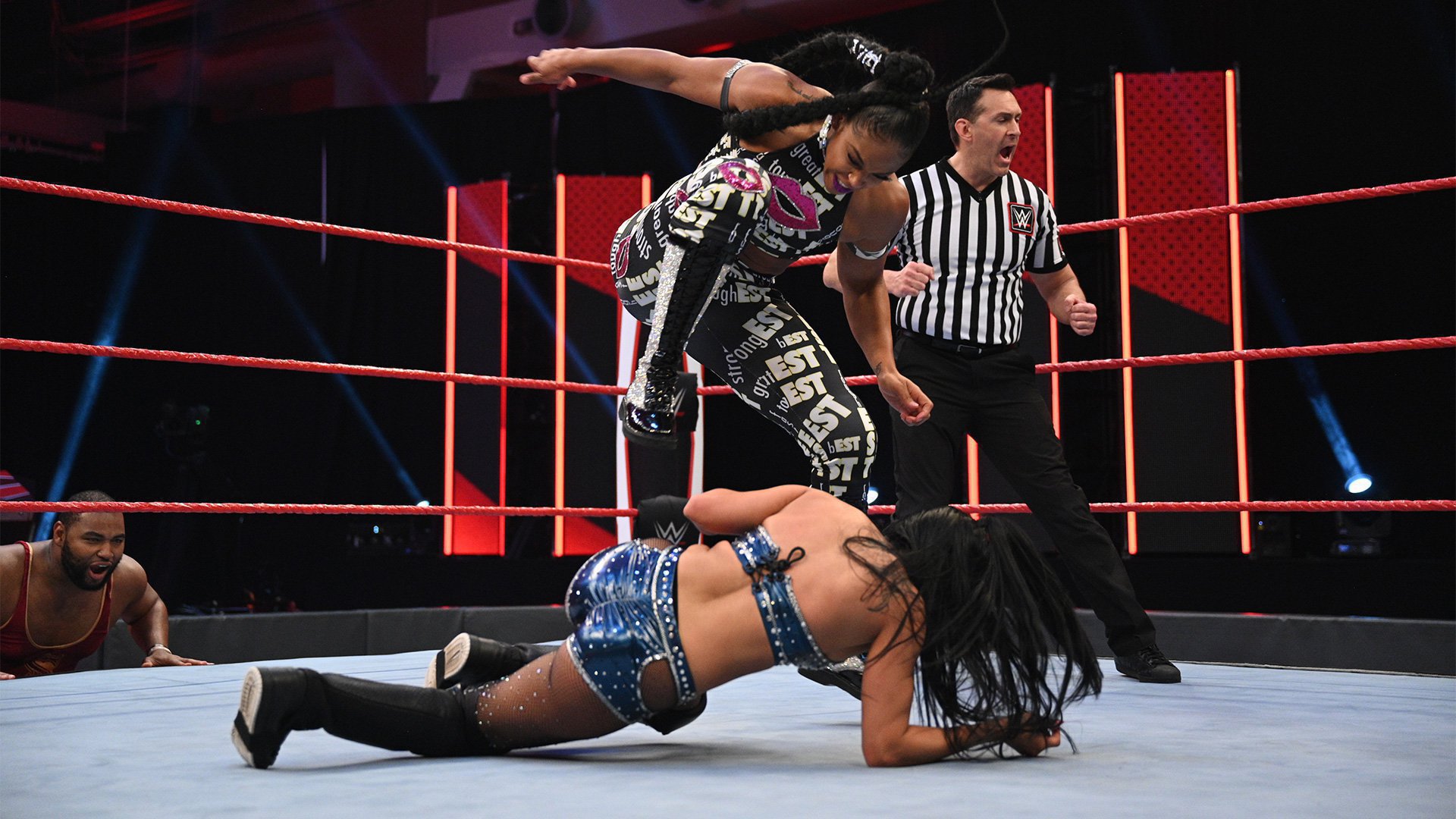 It would appear that The EST of NXT is now The EST of WWE, and appropriately enough, Bianca Belair was en route to earning one of the bEST Raw debuts in recent memory against Zelina Vega, but some interference from Angel Garza & Austin Theory stopped her in her tracks.

Belair had just accomplished an incredible feat of strength by muscling Vega out of a dragon sleeper into an overhead pres slam press when Theory clambered up on the ropes. Montez Ford understandably didn’t take kindly to All Day mean-mugging his wife, so he laid one into Austin, and Angelo Dawkins went after Angel Garza. The all-out brawl caused the ref to throw out the match, but Ford had a solution that surely made everyone happy: A Six-Person Tag Team Match — the easiEST solution, and one that everyone seemed to like. 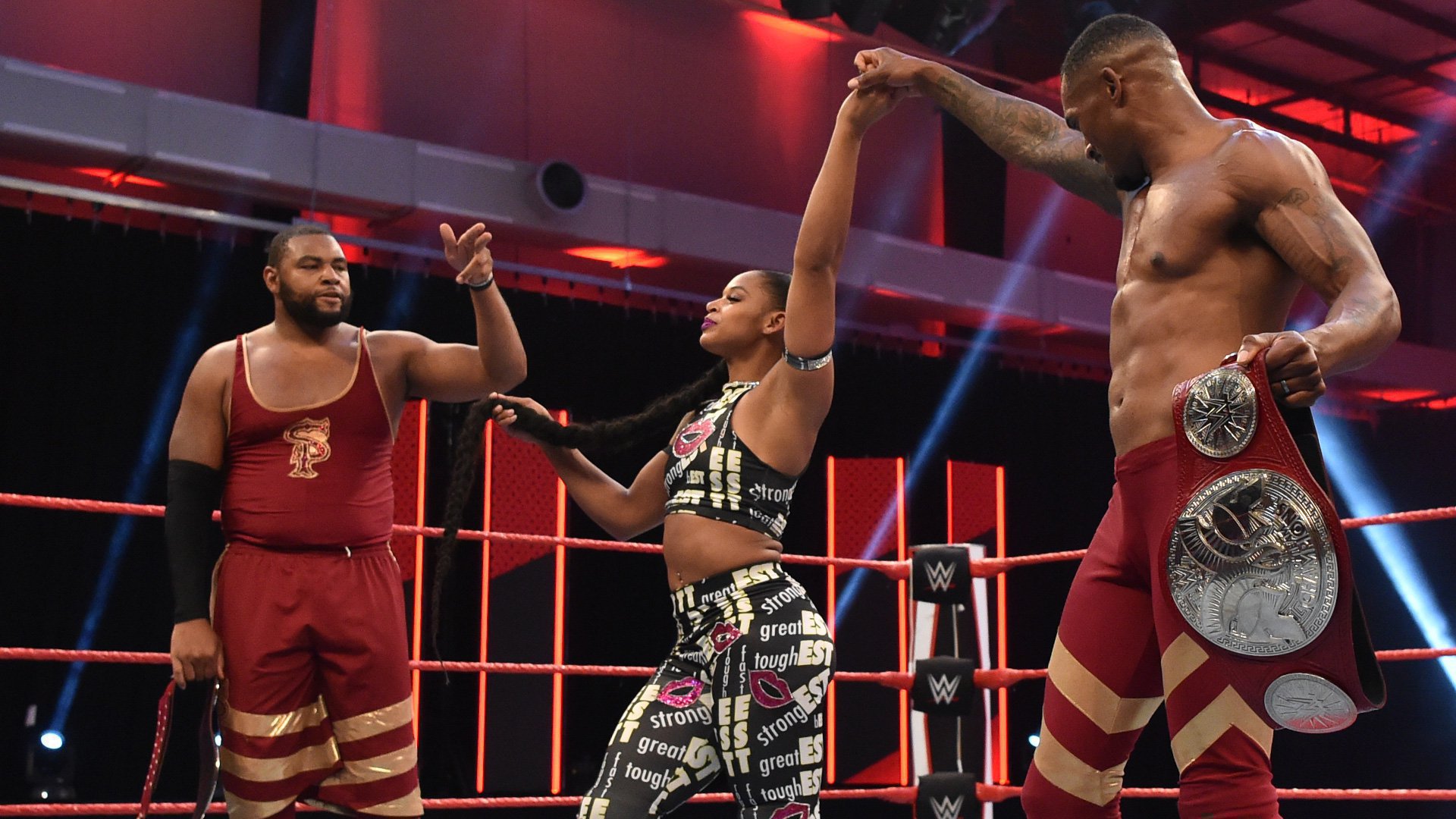 It took two tries, but Bianca Belair got the Raw debut she wanted, pinning Zelina Vega in a Six-Person Tag Team Match that stemmed from a singles match between the two that had blown up just minutes earlier. The EST of WWE largely stayed on the corner until the final moments, but her crew of The Street Profits wrapped this one quickly against Angel Garza & Austin Theory. So quickly, in fact, that Garza didn’t even get the chance to take off his famous tearaway pants.

When Belair entered the bout, she went to work instantly, flattening Vega with a Glam Slam into the turnbuckle and sealing the win with a KOD that finally brought her Raw debut to a close — the first display of her dominance on the red brand, but certainly not the last.

Aleister Black and Apollo Crews fought for 40 minutes on Raw 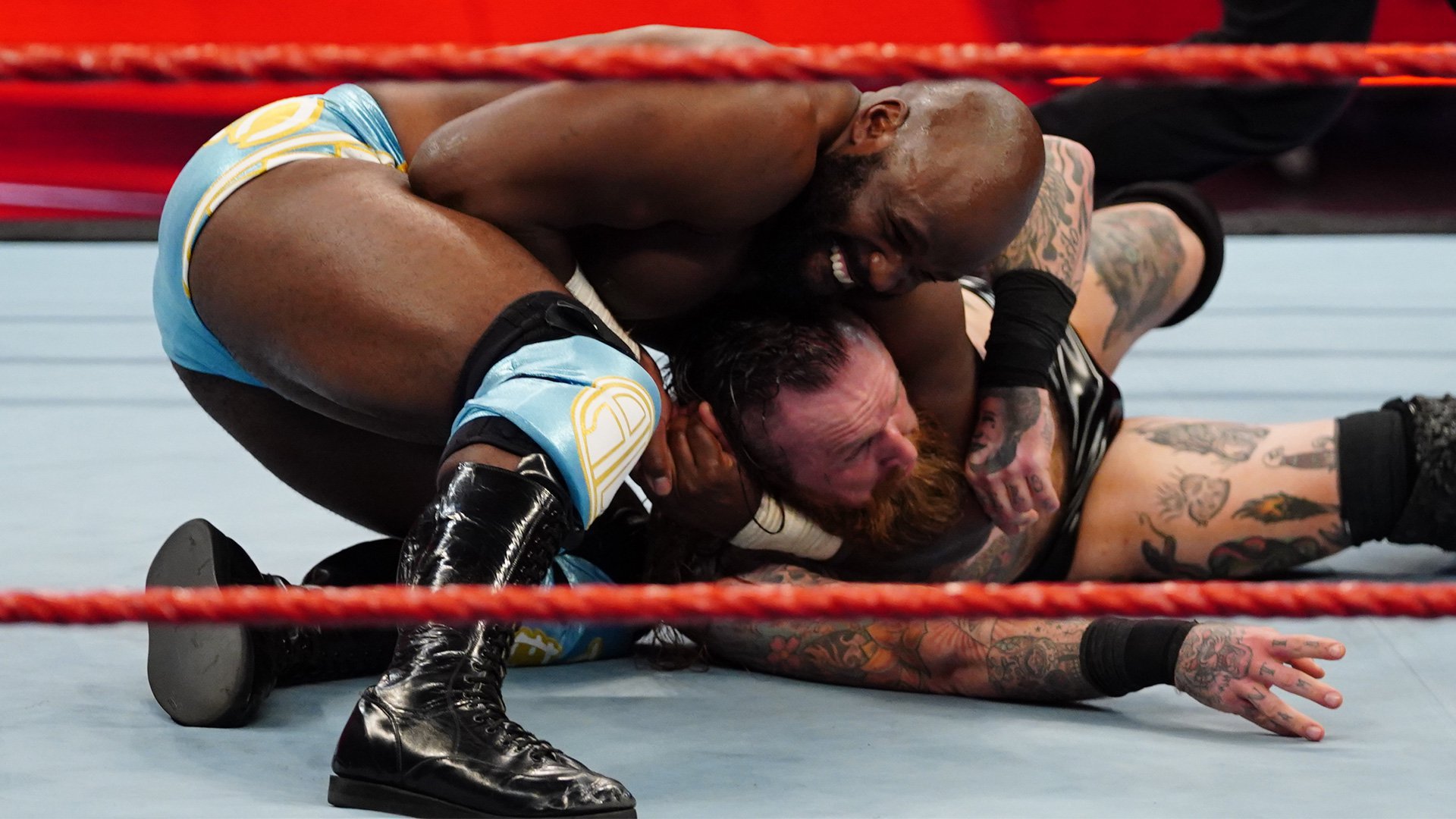 Thanks to some draft picks that were set to expire, Apollo Crews found himself back on Monday Night Raw after a yearlong stint on SmackDown. And he wasted no time showing the WWE Universe what they’d been missing, going toe-to-toe with Aleister Black for nearly an hour in an effort that was so impressive that you’d be forgiven for burying the lede that he lost.

Black, who likes to put his opponents away quickly, found himself completely stymied by Crews, who had an answer for every move and enough athleticism to send The Ominous Man From Amsterdam struggling for answers. Crews went down swinging, and only a last-gasp Black Mass finally put him down for three. Points to Black for a hard-fought victory, but the message couldn’t be clearer: Apollo Crews is going to be a problem. 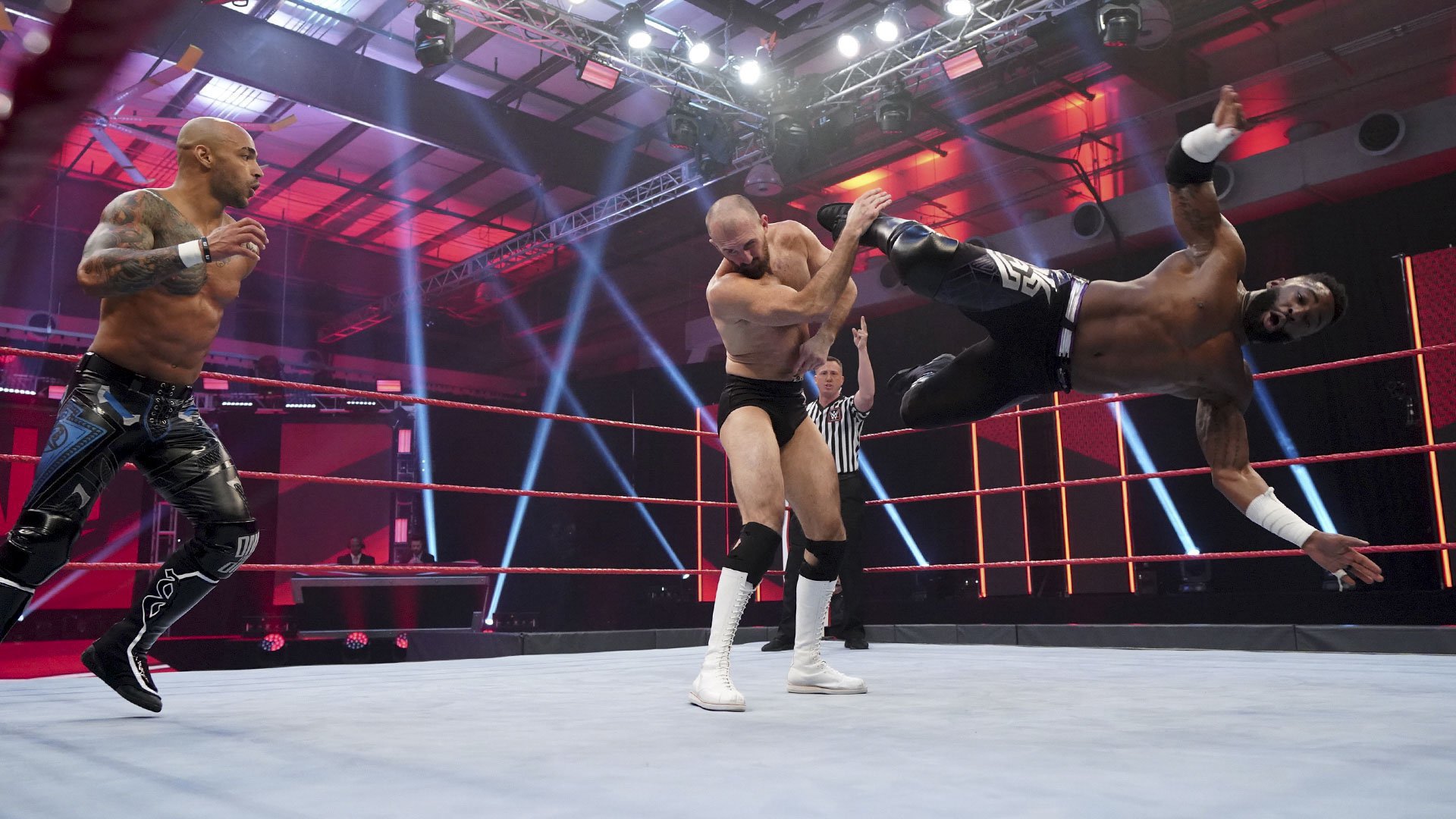 Ricochet & Cedric Alexander have only been a tag team for one match, but they were, to put it mildly, incredibly impressive. So here they are again — and potentially for the foreseeable future, now that they’ve gotten past an established duo in NXT, NXT UK and 205 Live mainstays Oney Lorcan & Danny Burch.

Throw ‘em up, of course, for the efforts of Lorcan & Burch, a beloved team on their home brands who looked great. But Ricochet & Alexander seem to have caught magic in their pairing, and they weren’t about to let it slip. Despite Burch’s efforts to smother Alexander with submissions, Ricochet tagged in to turn the tide, and the pair quickly dismantled Lorcan with a quick-strike string of signature moves. Yeah. We could get used to this.

Rollins takes his frustrations out on Denzel Dejournette 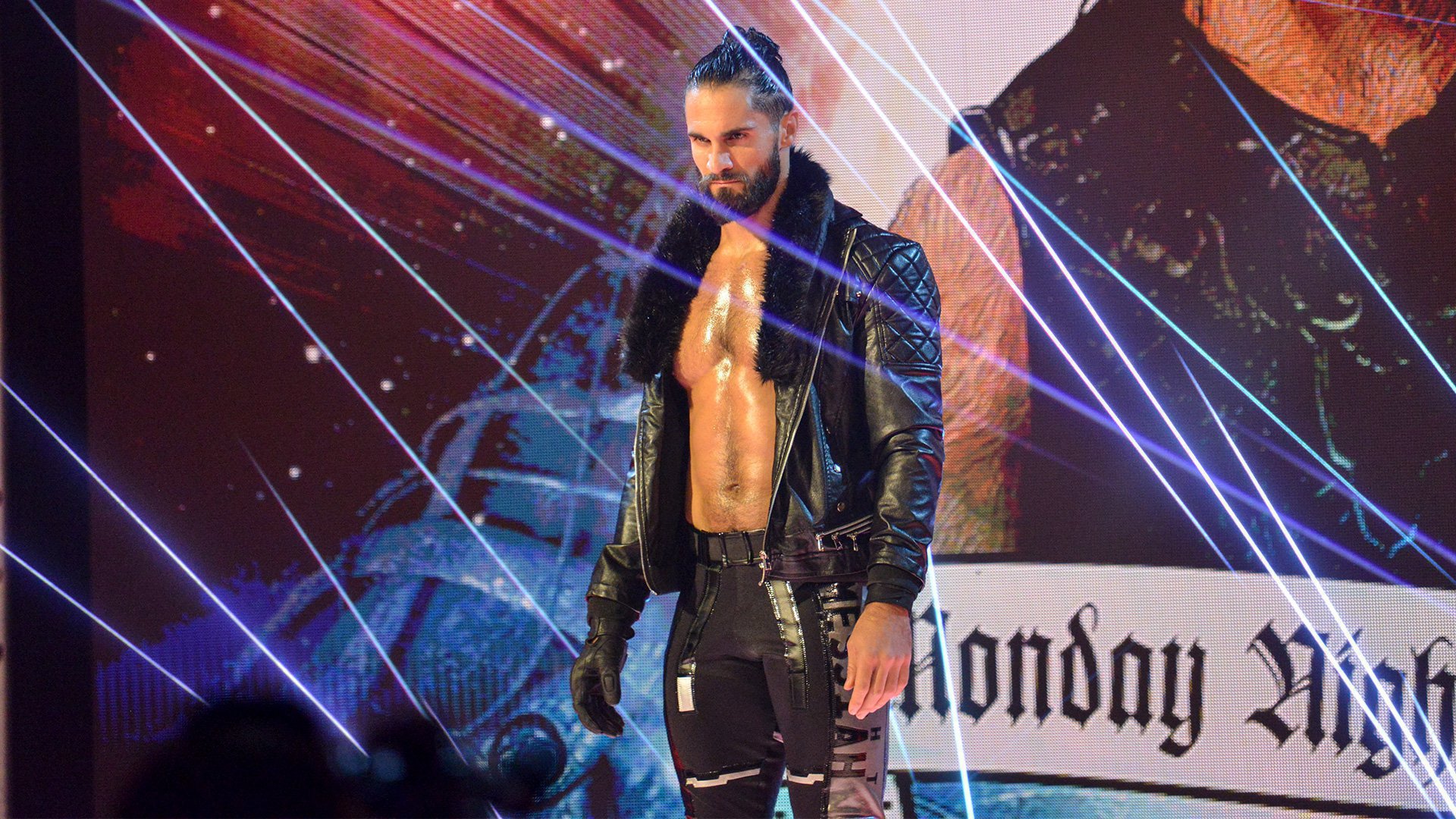 NXT’s Denzel Dejournette surely has a bright future, but on Raw, he was merely a sacrificial lamb for a furious Seth Rollins, who was fuming after his WrestleMania humiliation at the hands of Kevin Owens and surely looking to reclaim some of his messianic mystique in the wake of two WrestleMania losses in one night.

Dejournette, then, was toast before this even began, and Rollins showed no mercy against him, beating Dejournette across the ring and dispatching him with the Stomp. During a pre-Raw interview, Owens promised to kick things into the next gear, so it’s hard to imagine that Rollins didn’t hear those words and decide to do the same. 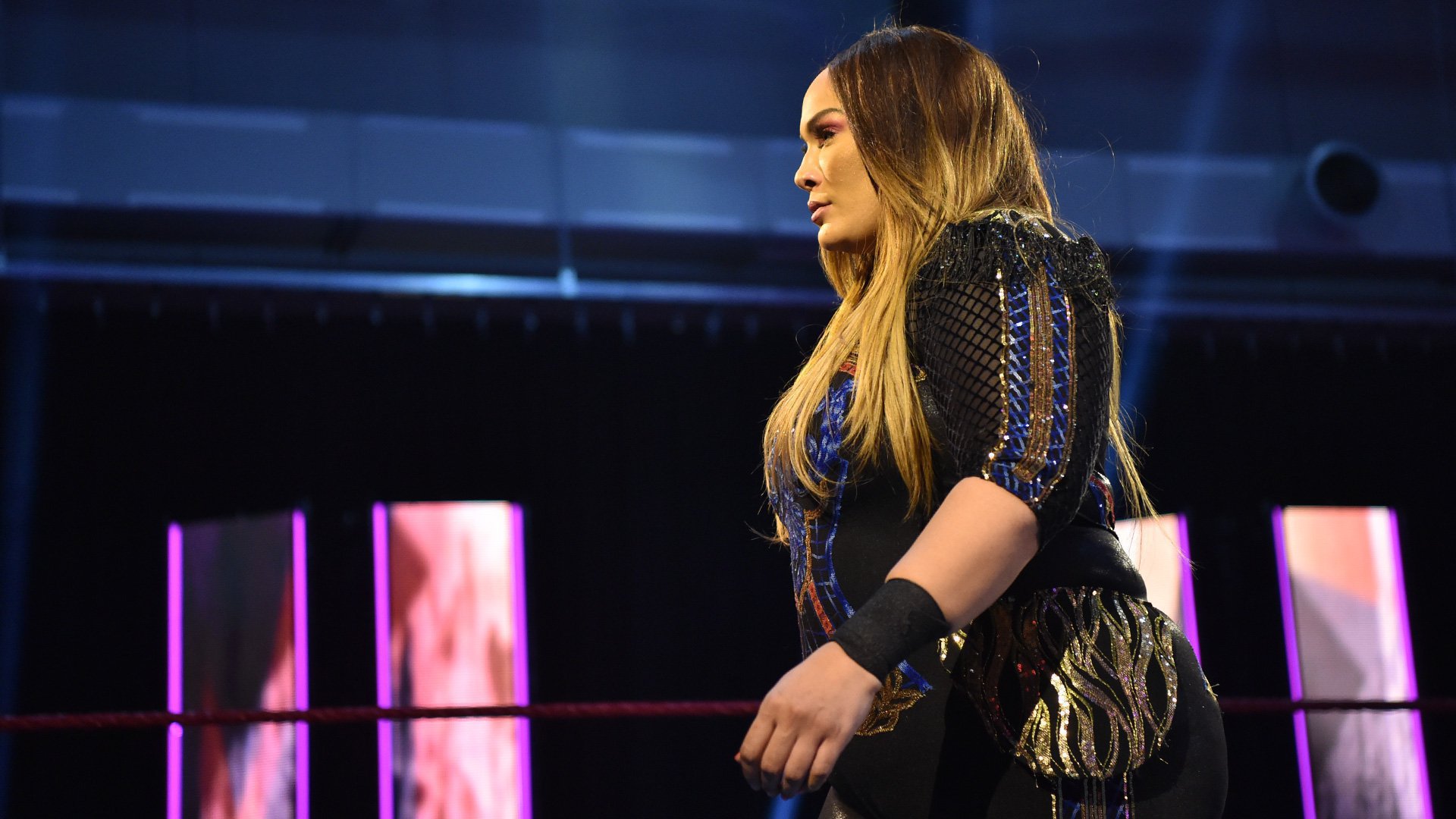 It’s been a long time since we’ve seen Nia Jax in a WWE ring, but The Irresistible Force picked up right where she left off in her big return from double knee surgery. Jax was all but unstoppable in her comeback, thoroughly dismantling NXT’s Deonna Purrazzo before pinning her with a Samoan Drop and modified DDT with a simple “Bye-bye” to her overwhelmed opponent. Seems like we’re going to be hearing that a lot. 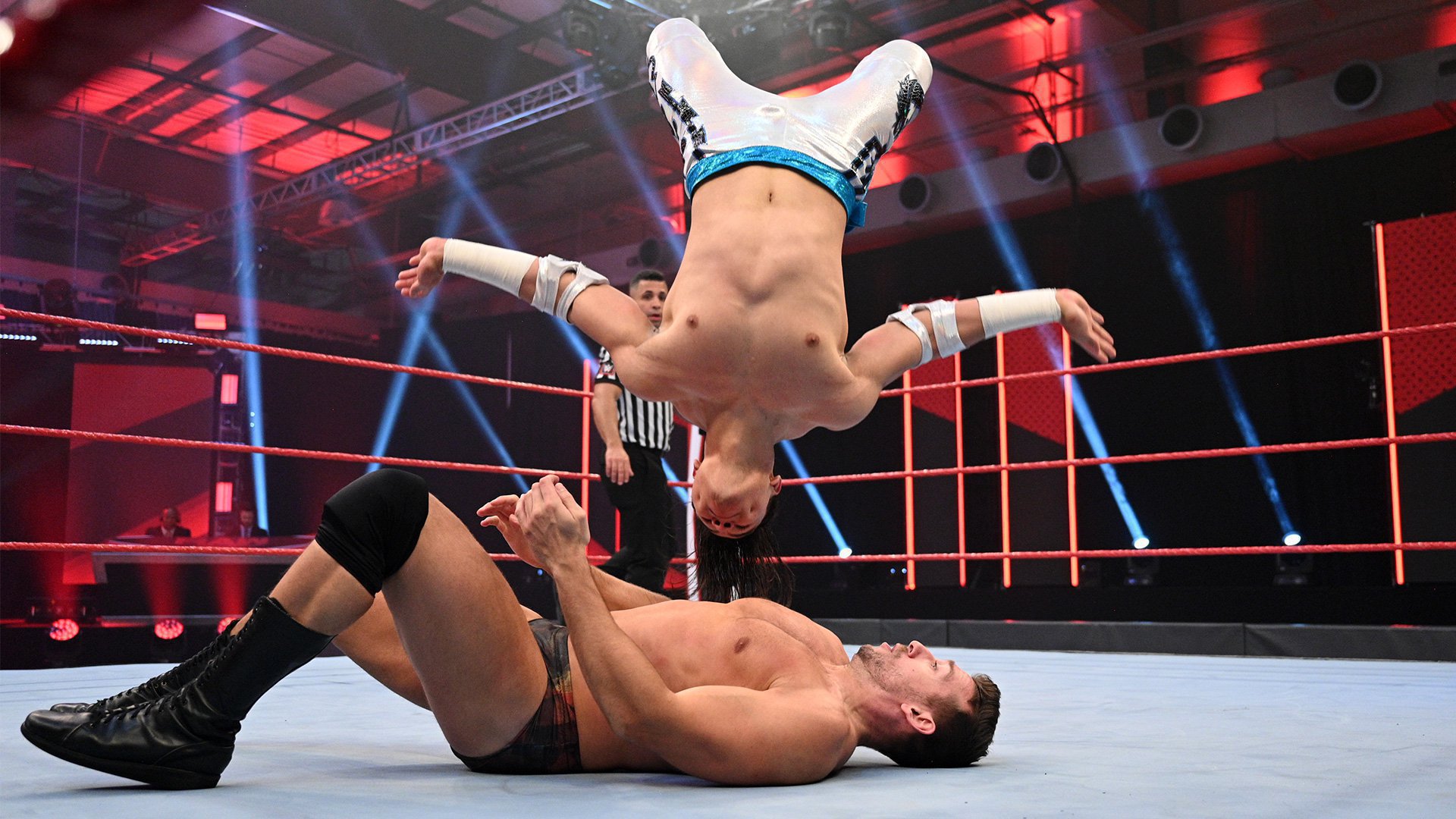 Conspicuous by his absence these last few weeks has been Humberto Carrillo, who was becoming a reliable mainstay of Monday Night Raw before The Road to WrestleMania kicked up in earnest. He’s back, and by the looks of things, he hasn’t lost a step. Carrillo scored a tough win against Brendan Vink (who, you may remember, is an enormous man) with a pitch-perfect moonsault once he got the big man off his feet. With a fresh start before him, it’s looking like the world is once again at Humberto Carrillo’s feet. Let’s see what he does with it.

What happened between McIntyre and Big Show after WrestleMania? 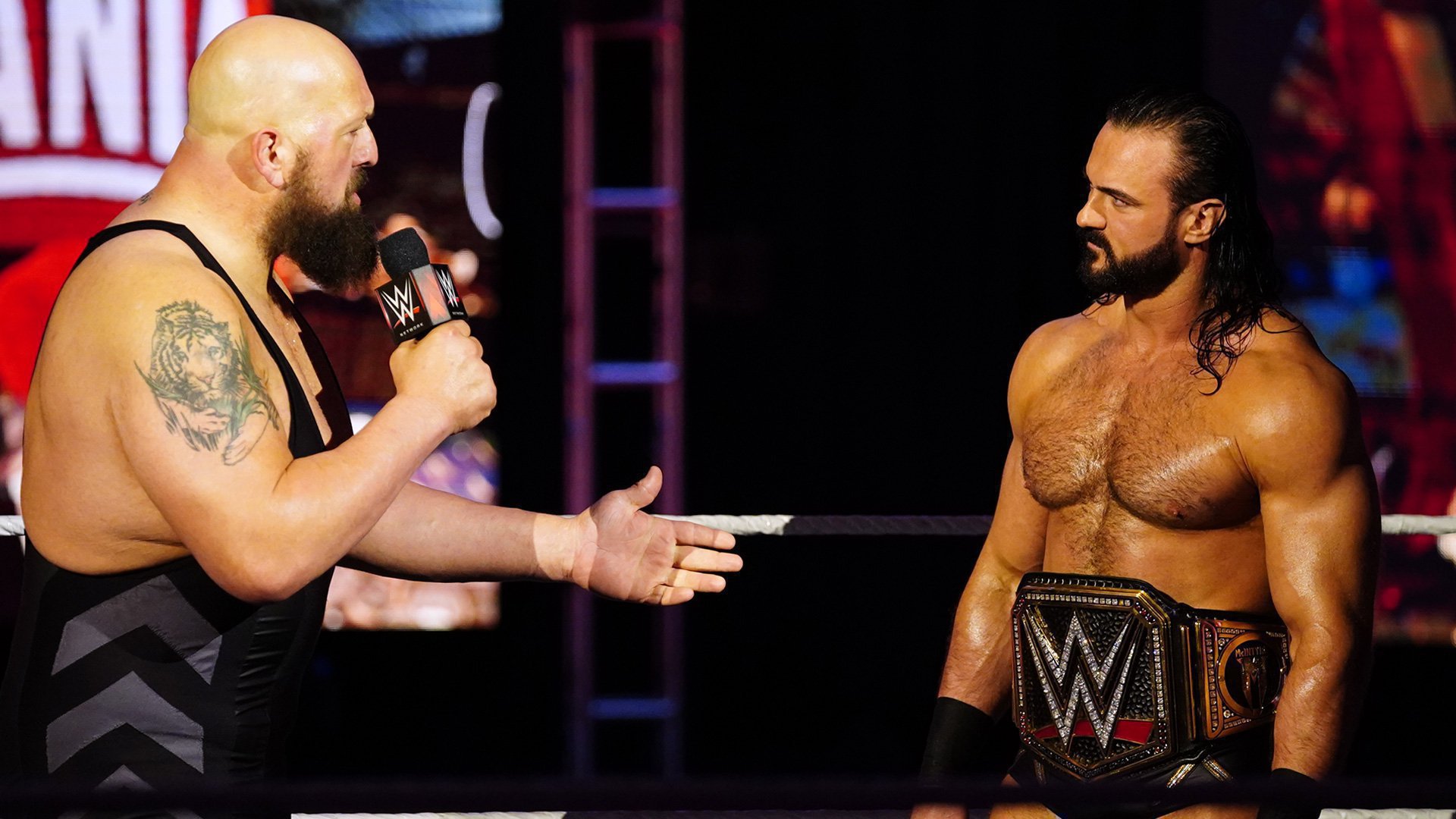 It took Drew McIntyre 19 years to become WWE Champion, but he quickly learned that the hard work begins after you’ve climbed the mountaintop. He learned it immediately, in fact. We found out on Raw that McIntyre was provoked into a match by Big Show just minutes after pinning Brock Lesnar to win the title at WrestleMania, and the footage aired on Raw as McIntyre’s first defense.

Big Show’s rationale for confronting McIntyre was to make the champion show he had what it truly takes to win the title and he certainly had his fun with the wounded titleholder, but the answer turned out to be a resounding “yes.” McIntyre roared back from his deficit to down The World’s Largest Athlete with a Claymore and retain the championship. Props to Show for knowing when to pick the right moment, but McIntyre clearly wasn’t about to be written off as a fluke. After years of being called “the future,” there’s no way he’s about to let the moment pass, and he knows what he’ll have to do to keep it.