Just as soon as he returned to Full Sail, Tyler Bate might be right back in the thick of things on NXT thanks to a sour encounter with Cameron Grimes.

Matt Riddle put an end to Grimes’ recent winning streak with a scintillating victory, ultimately countering The Technical Savage’s attempt to hit “The Cave-In” into a powerbomb before connecting with the Bro Derek.

Afterward, Grimes was disinterested in Riddle’s show of “bromanship,” turning down a fist bump. Obliging The Original Bro’s gesture instead was Bate, seated in the front row after arriving alongside Pete Dunne earlier in the night.

Grimes greeted “Textbook” Tyler with a shove,  prompting Bate to drop him like a pile of bricks with a Bop and Bang punch.

The Forgotten Sons used the numbers advantage to get the better of Breezango two weeks ago with Jaxson Ryker serving as the x-factor at ringside. Thanks to a newfound ally in Isaiah “Swerve” Scott, however, Tyler Breeze & Fandango returned the favor with a victory in the two teams’ latest tussle.

Recently removed from a near-upset win against NXT North American Champion Roderick Strong earlier this month, “Swerve” paid dividends when Breezango — this time sporting “Top Gun”-inspired outfits as their fashion of choice — tapped him as their partner.

With Breezango’s previous tag team partner Kushida sidelined due to a broken wrist, Scott proved to be more than up to the task as the next man in. Dazzling the NXT Universe by using Ryker as a springboard to launch himself onto Steve Cutler & Wesley Blake on the outside, “Swerve” later secured the pin on Blake after a step-up kick that echoed throughout Full Sail Live.

There’s a new Man of the Hour in the NXT Cruiserweight division — and challengers are already lining up to dethrone him.

Two weeks into his reign, NXT Cruiserweight Champion Lio Rush joined the commentary team to take in Angel Garza’s victory over Gentleman Jack Gallagher. The encounter was a high-impact affair, finding its end after Garza’s quebrada.

Garza left no doubt about his intentions afterward, eyeing Rush from the ring and planting a bullseye squarely on the title.

Dakota Kai & Tegan Nox are one step away from completing storybook comebacks from injury, but their next obstacle is their biggest yet.

Strong and thriving in their recent returns, they joined forces Wednesday to knock off Marina Shafir & Jessamyn Duke in a match that NXT General Manager William Regal ruled would determine the next challenger for the Women’s Tag Team Championship.

Nox used The Shiniest Wizard to clinch the title opportunity, but her celebration with Kai was short-lived. Asuka & Kairi Sane appeared anything but impressed, delivering a message on the TitanTron for their new-found foes, declaring that they have no chance of ending the current champions’ reign when the two teams tangle next week on NXT.

Roderick Strong managed to battle his way out from the corner he backed himself into, narrowly retaining his North American Championship.

With NXT General Manager William Regal foiling Strong’s plan last week to avoid a title defense altogether, Strong found himself between two goliaths in Keith Lee and Dominik Dijakovic with his title on the line in a triple threat match.

Commandeering the imagination of the Full Sail Live crowd and highlight reels with breath-taking moments like a spectacular powerbomb-superplex combination and Lee’s death-defying tope con giro, all three competitors made magic.

In the end, it was the brute force of Lee and Dijakovic sealing their own fate. Strong swooped in to steal the victory, seizing the moment to finish off Lee for a cover after the Limitless Superstar powerbombed Dijakovic off the ropes. 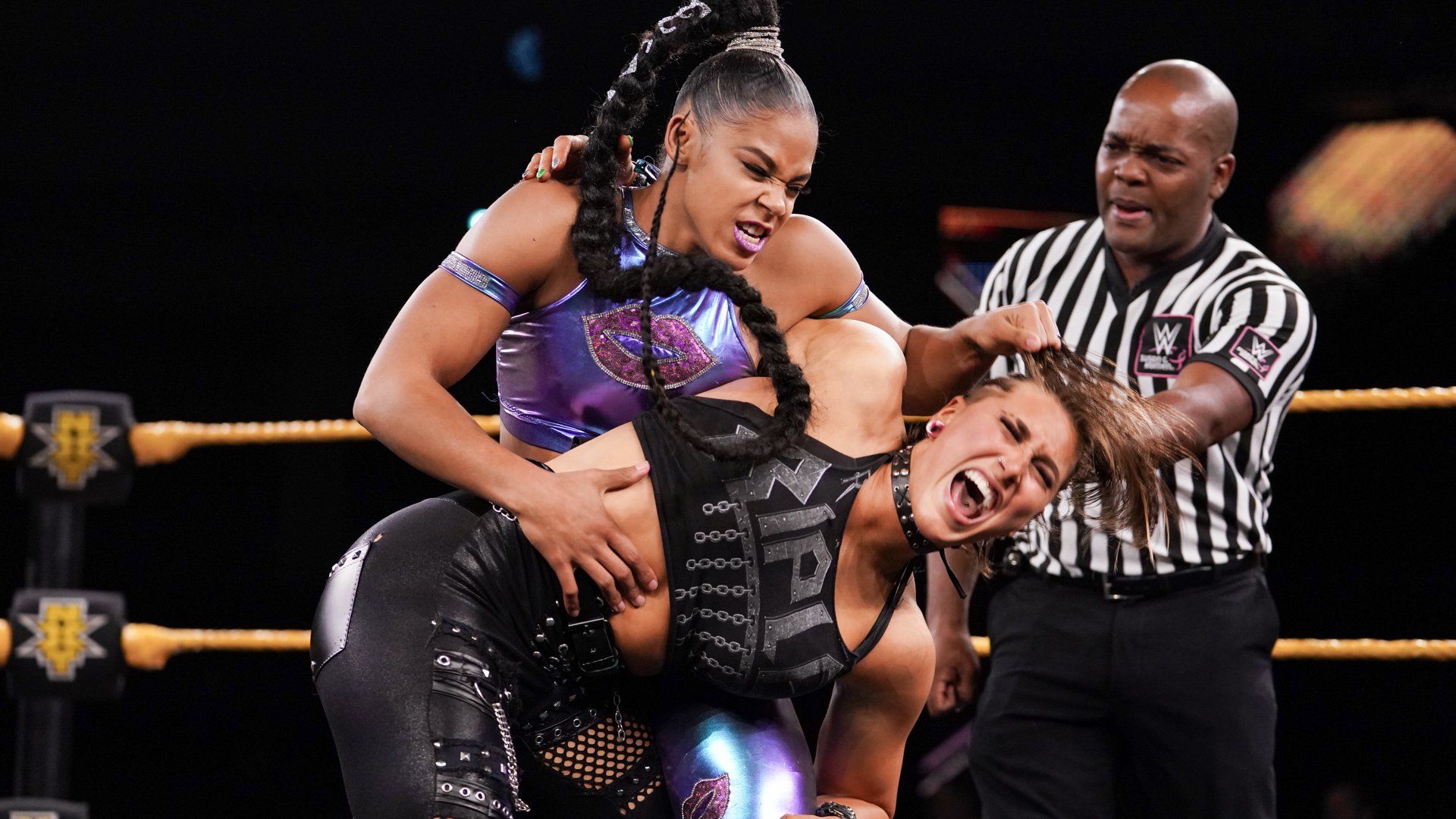 They say the enemy of your enemy is your friend, and that holds true for Candice LeRae in the case of Io Shirai.

Rhea Ripley’s bout with Bianca Belair showcased two of the NXT Women’s division’s most powerful competitors trading tests of strength and athleticism. Neither was able to gain much of an advantage in the evenly matched bout until Shirai arrived to try to spoil things for Ripley, apparently not taking kindly to Ripley confronting her last week.

But LeRae also joined the scene to foil her bitter rival’s plans, taking out The Genius of The Sky at ringside. Meanwhile, “The Nightmare” finished off Belair with the Riptide following an astute counter.

While all four women seemingly have their sights set on Shayna Baszler and the NXT Women’s Championship, Ripley may have seized the pole position with her latest victory. Regardless, there is no shortage of challengers ready to step to The Queen of Spades.

Bálor shocks the NXT Universe with savage attack on Gargano

Finn Bálor already upset the balance of power in NXT once this month, causing a seismic shift with his return to the black-and-gold brand.

He did it again Wednesday in even more shocking fashion.

Bálor arrived to seemingly help even the odds when Tommaso Ciampa and Johnny Gargano confronted The Undisputed ERA, who were fresh off picking the bones of the battered Keith Lee and Dominik Dijakovic after Roderick Strong’s successful North American Title defense.

Standing side-by-side with The Blackheart and Johnny Wrestling, Bálor stunned all in attendance when he instead caught Gargano on the nose with a Pele Kick, leaving The Undisputed ERA to decimate Ciampa four-on-one. Bobby Fish and Kyle O’Reilly held the helpless Ciampa in place for a devastating Last Shot by NXT Champion Adam Cole.

But all incredulous eyes were locked on Bálor, who wasn’t finished. He sent Gargano and the ringside barricade toppling with a thunderous dropkick before punctuating his confounding actions by spiking The Heart and Soul of NXT head-first on the ramp with the 1916 DDT.

With Bálor once again turning NXT upside down, we’re left wondering a simple question — why?