NXT Women’s Champion Charlotte Flair spoiled The Nightmare’s return to the ring against Io Shirai, leaving both Superstars lying. Elsewhere, Karrion Kross turned in another impressive performance before being confronted by Tommaso Ciampa, The Velveteen Dream backed up Dexter Lumis against The Undisputed ERA, and Drake Maverick pulled off another shocking win in the NXT Cruiserweight Title Tournament. 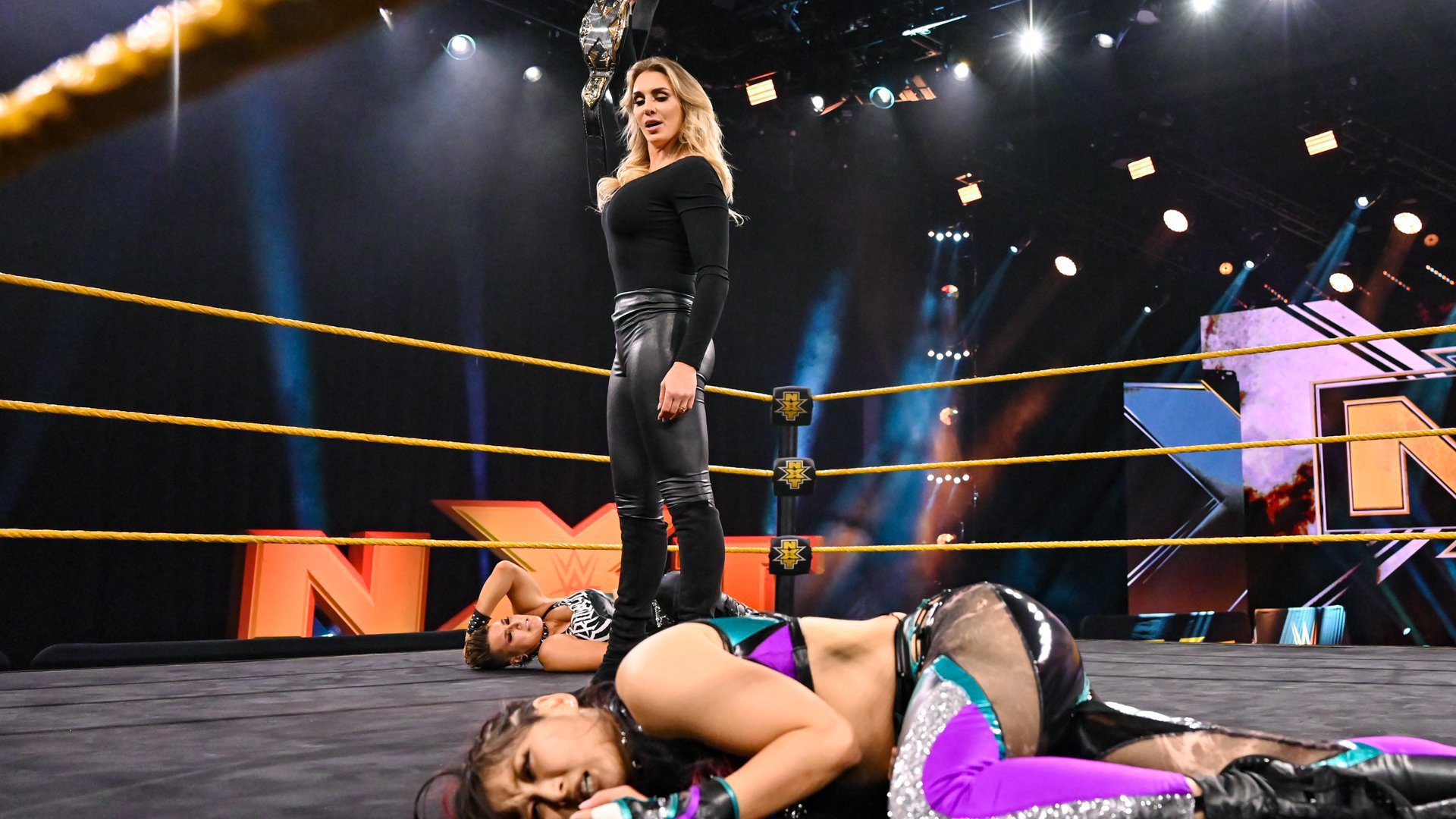 Karrion Kross’ second match in NXT looked a lot like his first: completely lopsided. Kross made short work of Liam Gray, submitting him with the Kross Jacket before being confronted by Tommaso Ciampa. Making his first appearance on NXT since being taken out by Kross more than a month ago, The Blackheart challenged Kross to a bout at NXT TakeOver: In Your House.

El Hijo del Fantasma has wasted no time making an impression in NXT. The masked Superstar bested Akira Tozawa after a “Phantom Driver” to win Group B, clinching a match against the Group A winner to determine the Interim NXT Cruiserweight Champion.

Mia Yim knocked off Santana Garrett after hitting Protect Ya Neck before Candice LeRae and Johnny Gargano came out to rain on her parade, and they weren’t only there to talk trash. The confrontation turned physical until Keith Lee provided The HBIC with backup, giving LeRae and Gargano second thoughts.

Roderick Strong made The Undisputed ERA’s decision to send him into battle look wise, but he may have regretted it in the end. Though he secured victory over Dexter Lumis with a well-timed roll-up, Lumis applied the Anaconda Vice afterward and refused to relinquish it — even when Adam Cole and Bobby Fish attacked him. The Velveteen Dream arrived to fight them off, delivering a soaring elbow drop from the top rope to Cole beyond the barricade.

Drake Maverick again showed tremendous fortitude, refusing to quit despite getting caught in Kushida’s dreaded Hoverboard Lock. Also stuck in Kushida’s armbar later in the bout, Maverick reversed into a pinfall for the massive upset, forcing a three-way tie with Kushida and Jake Atlas atop Group A. All three Superstars will face off in a Triple Threat Match next week to determine who faces El Hijo del Fantasma for the championship.

Damian Priest gave Finn Bálor all the credit in the world for helping to make NXT the brand it is today, and that’s exactly why he took aim at The Prince. The Archer of Infamy announced that he wants to face Bálor at NXT TakeOver: In Your House.

Seeing her first action since WrestleMania, Rhea Ripley showed no signs of ring rust in a seesaw battle against Io Shirai. Charlotte Flair came down to ringside to get a closer look, but she was inadvertently taken out when Shirai’s headscissors sent Ripley crashing into her. The NXT Women’s Champion fired back, flooring Shirai with a big boot before taking down The Nightmare with a spear and standing tall over both foes.

Rhea Ripley returns to the ring against Io Shirai 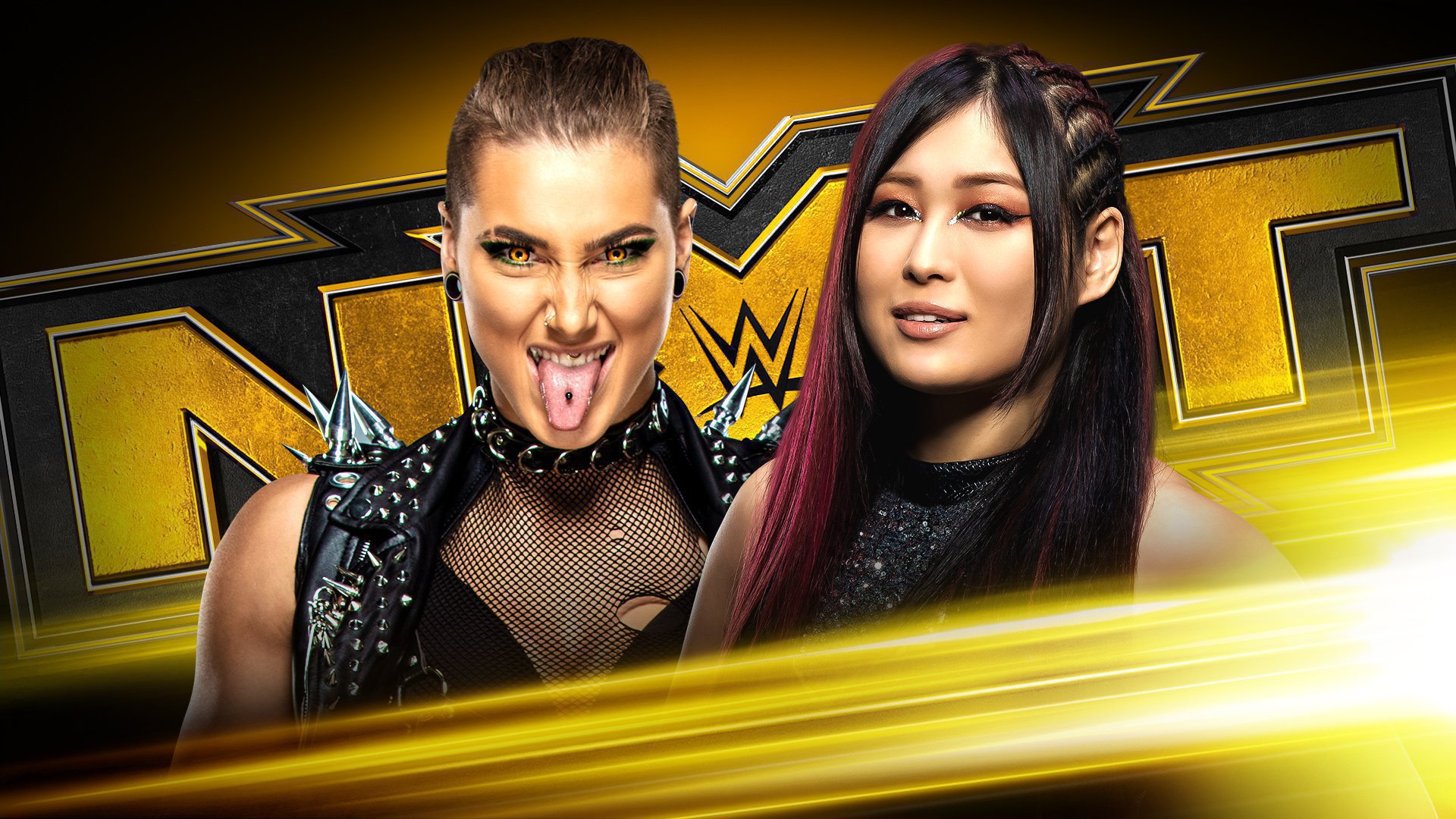 Rhea Ripley has made it clear that she’s laser-focused on regaining the NXT Women’s Championship. But her path back to another matchup with Charlotte Flair likely goes through Io Shirai, whom she’ll face tonight on NXT.

The Nightmare burst back on the scene for the first time since WrestleMania with her sights set squarely on The Queen and the title she took from her. But Ripley’s return also landed her in The Evil Genius of the Sky’s warpath.

Shirai’s opportunity against Flair was well-earned after emerging victorious from a Six-Woman Ladder Match. But The Queen thwarted Shirai’s challenge with a Kendo stick attack, handing Shirai a disqualification win but not the title. As far as The Joshi Judas is concerned, Ripley can get in line if she wants another championship opportunity.

Which woman will claim victory in this match with serious title implications?

Karrion Kross and Scarlett to kick off NXT tonight 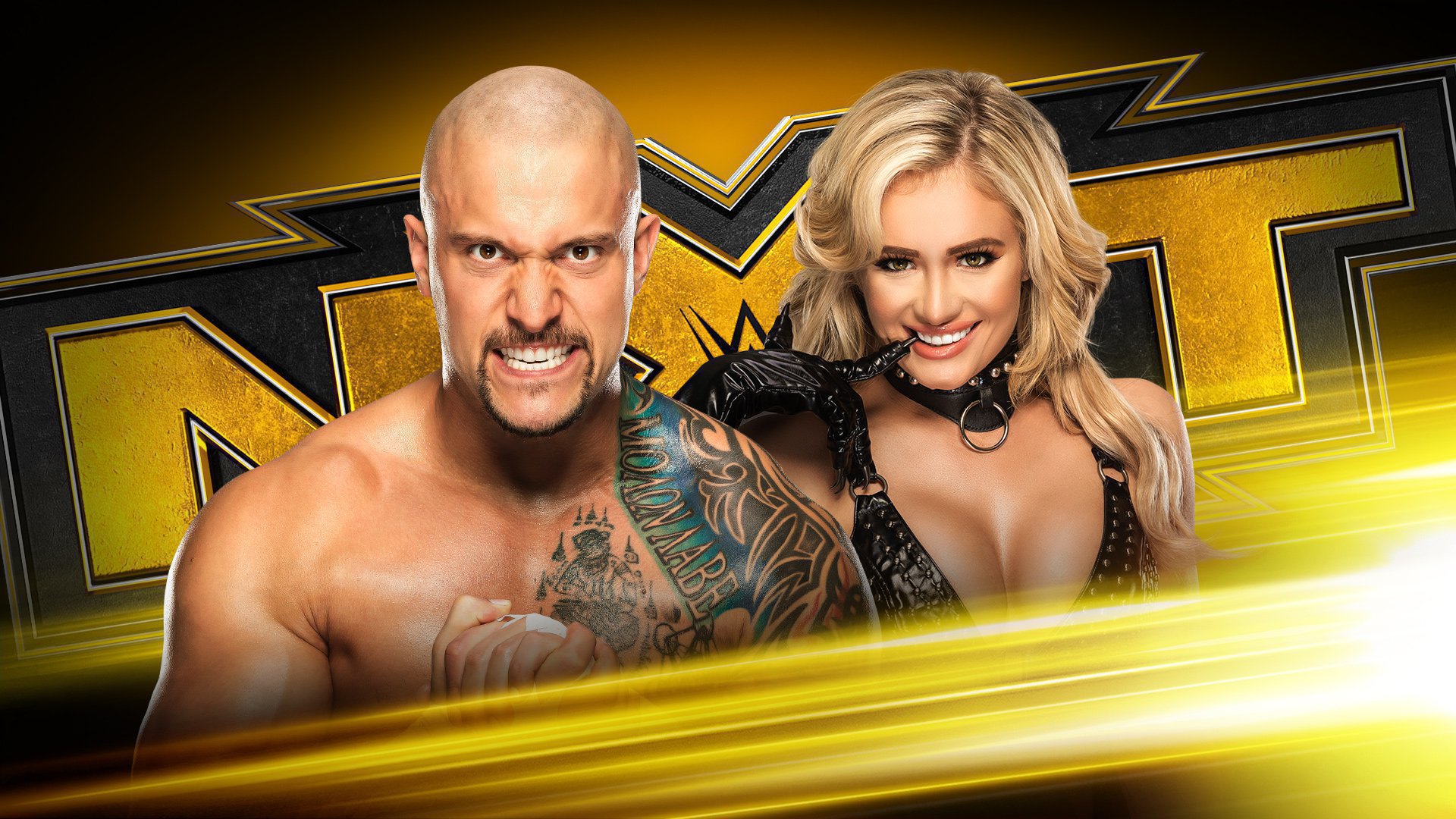 After captivating the NXT Universe in his debut two weeks ago, Karrion Kross will return to in-ring action with Scarlett to kick off NXT tonight.

The doomsday duo promised destruction for months, and Kross made good on those words in his first NXT match. After a spellbinding entrance, Kross decimated Leon Ruff, flattening him with two Doomsday Saitos before submitting him almost instantaneously with the Kross Jacket.

Will Kross’ second opponent suffer a similar fate? Tune in tonight at 8/7 C on USA Network to find out! 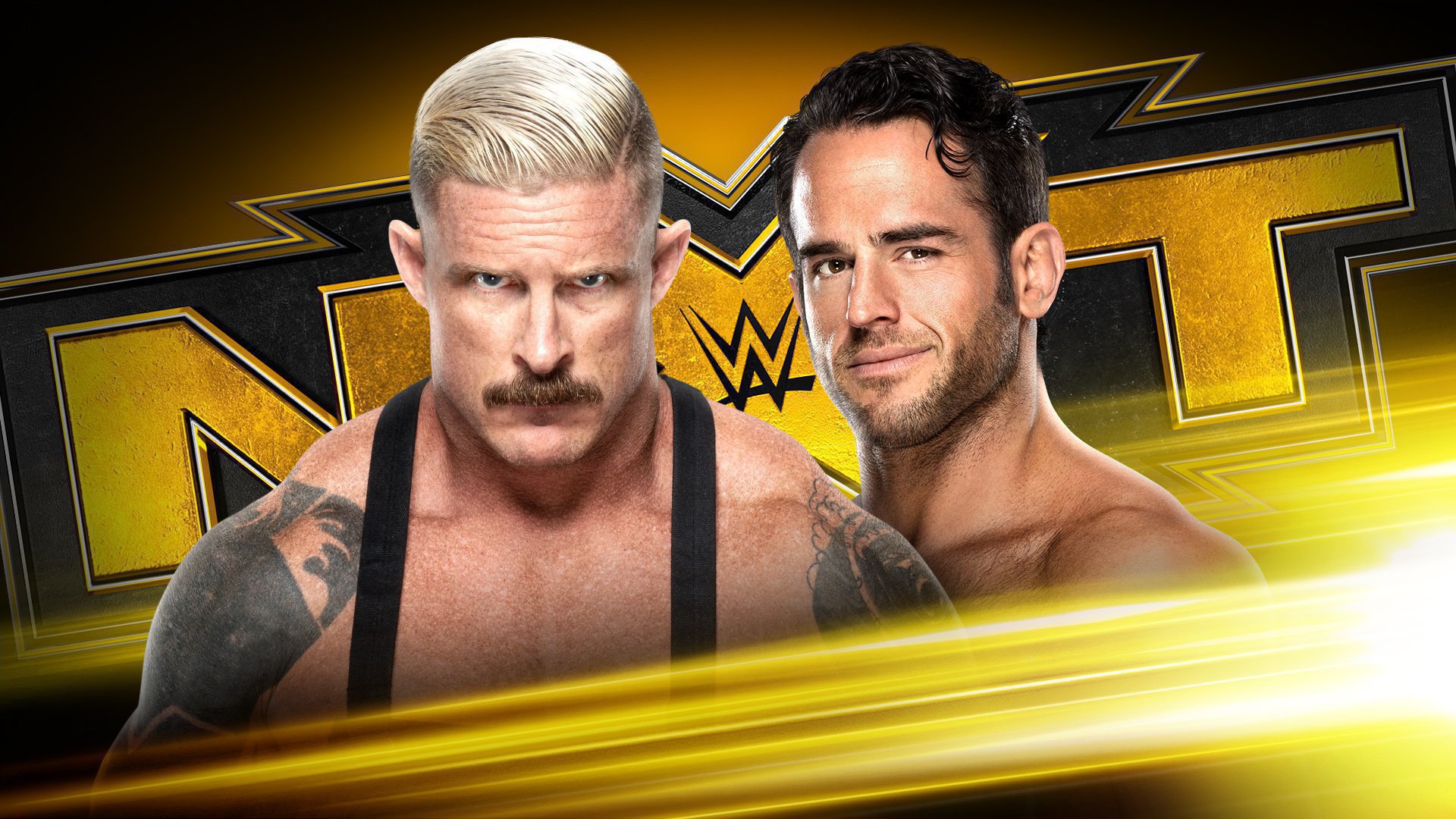 While the NXT Universe still might not be sure what exactly to make of Dexter Lumis, The Undisputed ERA see him as their newest enemy. But can Roderick Strong solve the black-and-gold brand’s most chilling Superstar when he steps in the ring with Lumis?

NXT Champion Adam Cole and company began having problems with Lumis last month. Cole & Strong seemed to essentially find themselves in a Handicap Match against The Velveteen Dream after Damian Priest took out Keith Lee, but Lumis stepped in as Dream’s partner in impromptu fashion and helped Dream pin Cole.

As a result, NXT’s most dominant faction is tapping The Messiah of the Backbreaker as its chosen mercenary. But will Lumis turn the hunter into the hunted? 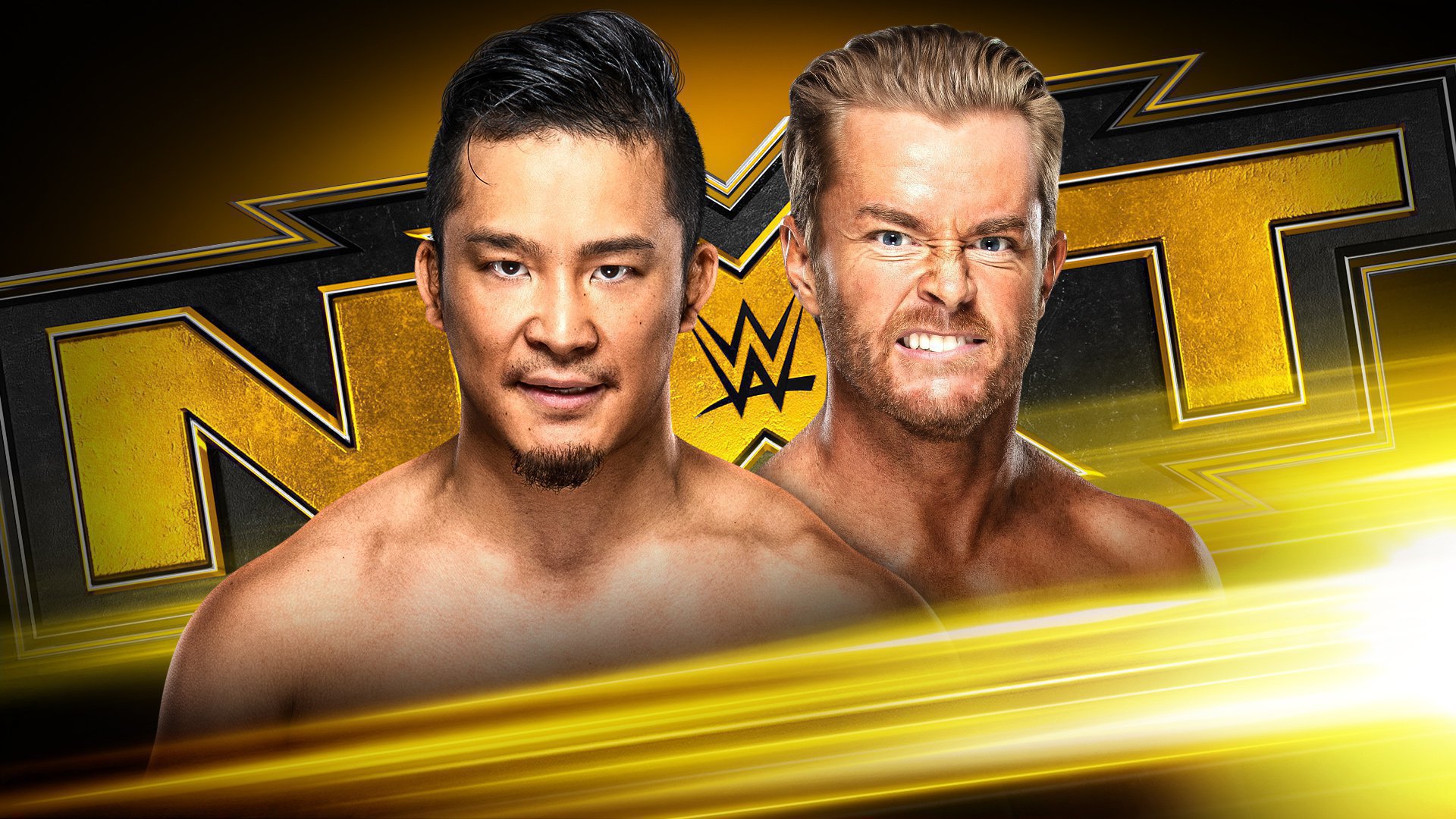 Drake Maverick can still keep his dreams alive in the Interim NXT Cruiserweight Title Tournament, but what awaits him figures to be his toughest challenge as he goes one-on-one with Kushida.

It’s a truly dire situation for Maverick in the Tournament’s final night of group competition. With a win, Maverick (1-1) would force a three-way tie atop Group A. Jake Atlas (2-1) previously lost to Kushida (2-0), but he defeated Maverick.

Meanwhile, a victory for Kushida sends him to the Interim Cruiserweight Title Match opposite the winner of Group B. NXT’s resident Time Splitter has been as impressive as any Superstar in the tournament, using his armbar to not only submit Atlas and Tony Nese, but send them straight to the injury report after their bouts.

Will Kushida punch his ticket for a title opportunity, or can Maverick overcome the odds to muck up the standings? Find out tonight at 8/7 C on USA Network. 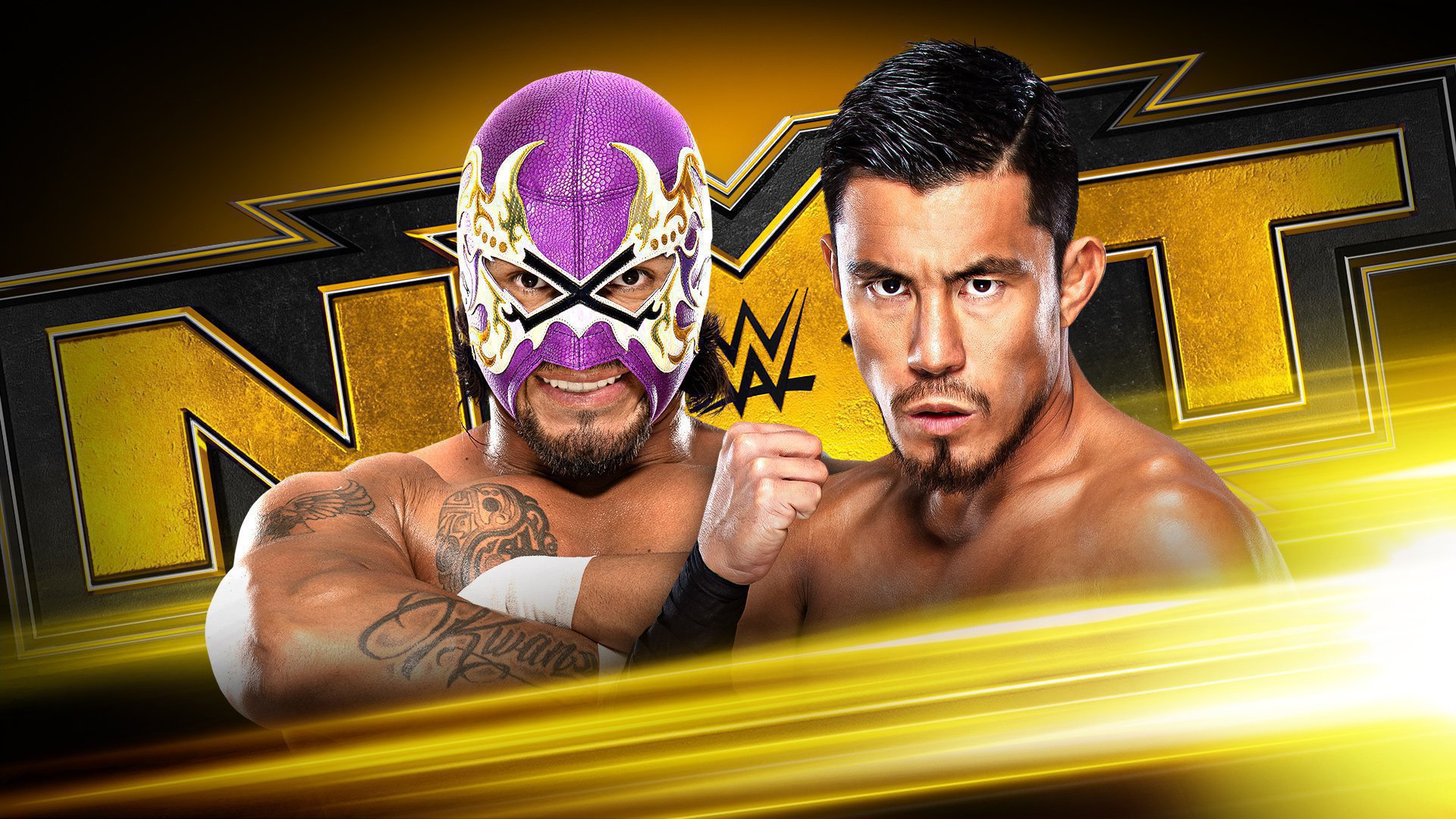 That El Hijo del Fantasma controls his own destiny and is a single victory away from winning Group B is quite a testament to the competitor’s mental toughness. Not only has the newcomer burst onto the scene by dazzling the NXT Universe with a pair of barnburners against Gentleman Jack Gallagher (a win) and Isaiah “Swerve” Scott (a loss), he has done so while fending off several apparent abduction attempts from an unidentified group of masked assailants.

Spending six days as Cruiserweight Champion three years ago seemingly isn’t enough for the revitalized Stamina Monster, who has been living up to his moniker with a pair of grind-it-out tournament victories against Gallagher and Scott. One of only two former Cruiserweight Champions in the tournament – and the only previous titleholder who remains in contention – Akira Tozawa boasts an experience advantage against Fantasma, but will it be enough to ground the high-flying rookie?