The Velveteen Dream appeared for the first time in months to pick apart The Undisputed ERA, while the next challenger for Keith Lee’s NXT North American Title was determined and Charlotte Flair’s homecoming was unwelcome by Rhea Ripley and Bianca Belair.

As difficult as winning The Dusty Cup was, Matt Riddle & Pete Dunne’s next challenge will be even tougher, and The Undisputed ERA made sure to let them know.

The BroserWeights celebrated their Dusty Rhodes Tag Team Classic victory by pulling into Full Sail in style on a golf cart with their trophy, sharing the moment with the NXT Universe. But it wasn’t long before NXT Tag Team Champions Bobby Fish & Kyle O’Reilly, who they’ll challenge at NXT TakeOver: Portland, cut the party short — that is, at least until Roderick Strong appeared to whisper something to his UE brethren and the black-and-gold gang made a swift exit.

That left The BroserWeights to resume the celebration and confidently proclaim that they’d dethrone Fish & O’Reilly in Portland.

Riding high after laying out Rey Mysterio on Raw, Angel Garza picked up an impressive victory over Isaiah “Swerve” Scott and has one thing on his mind: recapturing the NXT Cruiserweight Championship.

Garza came into this one holding a grudge with “Swerve” after he was the one to eat the pinfall in their Fatal 4-Way Match back at WWE Worlds Collide, costing him the title. But NXT’s resident lothario delivered his message in convincing fashion, defeating Scott with the Wing Clipper after again demonstrating the aggression he showcased against Humberto Carrillo and Mysterio. Afterward, Garza was sure to point out that he’d have his eyes on reigning champion Jordan Devlin, who never defeated him in the first place.

Dominik Dijakovic has his wish — another opportunity against Keith Lee, and this time for The Limitless One’s newly won NXT North American Title.

Lee will put that championship on the line against The Rare Breed in less than two weeks’ time at NXT TakeOver: Portland, but getting there was no easy task. First, Dijakovic had to deal with Killian Dain, who felt he was being overlooked in the pecking order to challenge Lee.

To no one’s surprise, these two behemoths brought an enormous amount of physicality to the squared circle, though it was Dijakovic ultimately making The Beast of Belfast feast his eyes.

If there’s one thing we’ve learned right away about Mercedes Martinez in NXT, it’s that she isn’t here to make friends.

That was on full display in her singles bout against the upset-minded Kacy Catanzaro this week. Catanzaro nearly pulled off the shocker with a near fall on a hurricanrana cover, but the close call only seemed to fuel Martinez’s intensity even more. “The Latina Sensation” put her diminutive opponent down after a devastating fisherman’s buster.

The BroserWeights provided backup for Tommaso Ciampa against The Undisputed ERA

Tommaso Ciampa has shown repeatedly that he has no problem taking on The Undisputed ERA all by himself even though the odds are stacked against him. But that doesn’t mean there aren’t allies willing to fight by his side.

Sharing a common enemy, The BroserWeights entered Full Sail to provide sorely needed backup for The Blackheart, who had been taking it to NXT Champion and TakeOver: Portland opponent Adam Cole and the rest of The UE before eventually succumbing to the numbers game. But Pete Dunne & Matt Riddle’s arrival flipped the script and they helped Ciampa go toe-to-toe with The Undisputed ERA in a pull-apart brawl that plunged Full Sail into complete chaos.

For NXT General Manager William Regal, the unruly sight was more than enough to create a Six-Man Tag Team Match pitting the foes against each other later in the evening.

If Angel Garza thinks it will be easy to reclaim his NXT Cruserweight Title, he’s sorely mistaken.

Reigning champion Jordan Devlin made his NXT TV debut in a win over Tyler Breeze, who was barely able to get started after Devlin tattooed him with a baseball slide on the apron during his ring entrance. Breeze later found his bearings and gave The Irish Ace all he could handle and then some. Devlin looked at home at Full Sail, though, putting Prince Pretty away with a headbutt that echoed throughout the arena followed by the Devlin Side.

The Queen was given anything but a warm welcome in her return to NXT.

Charlotte Flair arrived at Full Sail for the first time in years to interrupt Bianca Belair, only to later find herself interrupted by NXT Women’s Champion Rhea Ripley as well — two days after Ripley suggested that The Queen make use of her Royal Rumble win to challenge her at WrestleMania.

Though Ripley and The EST of NXT are squarely in each other’s crosshairs ahead of TakeOver: Portland, they put aside their differences temporarily to crash the 10-time Women’s Champion’s NXT homecoming, taking her down with a double-team maneuver before sharing pointed words with each other.

Charlotte’s WrestleMania plans may still be up in the air, but it’s clear that The Nightmare and Belair are on a collision course.

The Undisputed ERA has long dominated NXT, but their adversaries are starting to line up at a frantic pace.

This time, a ghost from the group’s past — The Velveteen Dream — returned to Full Sail to join the fight against The UE, but for a very different reason.

Making his first appearance at Full Sail since The Undisputed ERA took him out months ago, Dream had clearly not forgotten about their history together. With the Six-Man Tag Team Match between Tommaso Ciampa & The BroserWeights and The UE devolving into an uncontested melee, the former NXT North American seized the moment — and the ring — to dispose of The Undisputed ERA one by one to stand tall.

Before His Purple Highness’s arrival, the Six-Man melee started in a fashion similar to their brawl earlier in the evening — in complete disarray with the action starting on the ramp before the competitors even entered the ring. It also ended chaotically as the referee had no choice but to call for the bell once Roderick Strong interjected himself into the action.

The Undisputed ERA vow to get their hands on Tommaso Ciampa 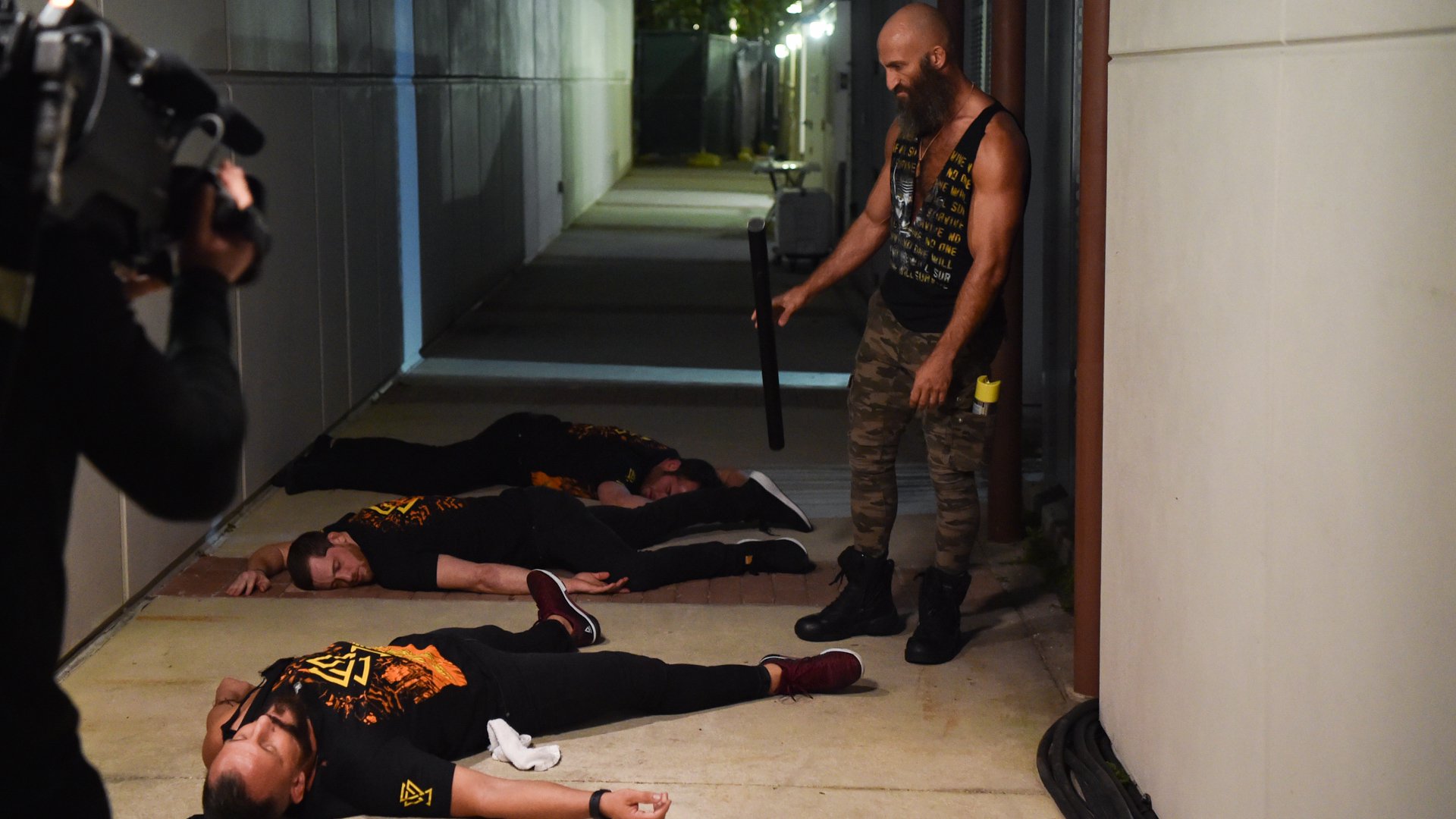 Last week on NXT, Tommaso Ciampa took out The Undisputed ERA before signing the contract for his NXT Championship Match with Adam Cole at TakeOver: Portland. The Blackheart then drove Adam Cole through a table.

Cole and his crew are promising to get their hands on Ciampa. Will they succeed in getting payback?