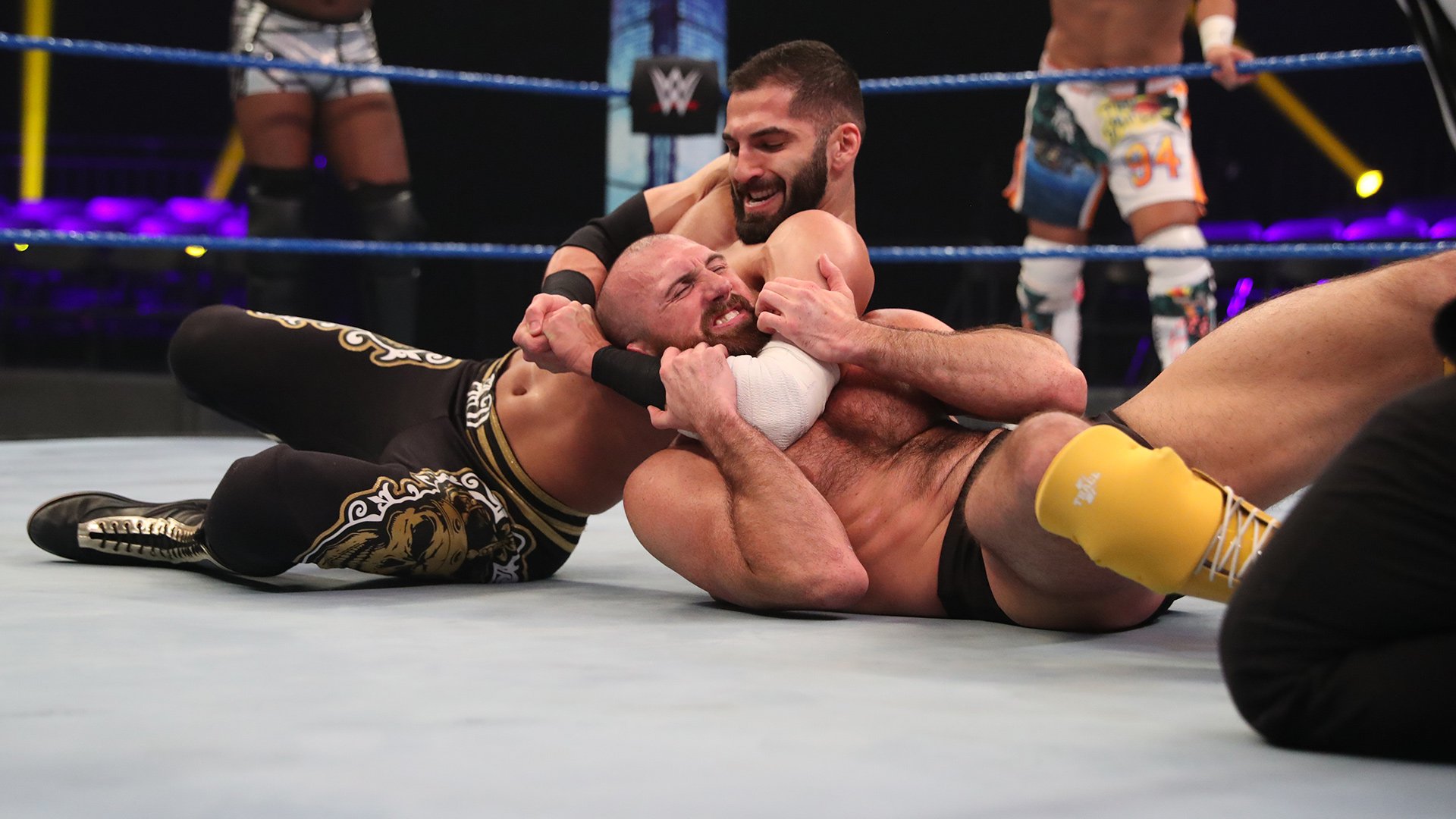 Tony Nese – who selected the team of originals – started off the bout against Kushida and quickly used his raw power to gain an advantage. However, Kushida’s technical ability and innovative offense quickly overwhelmed The Premier Athlete, forcing him to tag in Kanellis. From there, The Opportunist was quickly derailed by Kushida who would bring the hard-hitting Oney Lorcan into the match, followed by Danny Burch. The Strong Style Brit exercised his will on Kanellis, working with Lorcan and his other NXT teammates to keep Kanellis on defense.

A powerful and desperate strike from Kanellis allowed him to drop Lorcan and bring Nese back into the contest, but a counter from The Boston Brawler brought Burch back into the fray and he quickly stopped all of The Premier Athlete’s momentum. As Nese reeled on the outside, Burch pushed The Singh Brothers out of the way to toss his opponent back into the ring. A brief distraction from the Bollywood movie stars gave Nese an opportunity to strike. However, Burch countered, prompting Kanellis to save his tag team partner from a crossface before chaos broke out and all 10 Superstars entered the ring.

As a brawl ensued on the outside, The Singh Brothers unsuccessfully attacked Burch in the ring, but it was enough for Nese to clobber Burch with the Singh Cam and score the first elimination. Wasting little time, The Premier Athlete turned his attention to Tyler Breeze. Nese and Kanellis began working together without the help of the rest of their team. Frustrated with this course of action, Gentleman Jack Gallagher tagged himself into the match and charged at Prince Pretty.

Despite Breeze’s best efforts to fend off The British Superstar, a perfectly timed counter allowed Gallagher to secure a quick pinfall and eliminate Breeze.

Down two Superstars, Lorcan re-entered the match ready for a fight with Gallagher. However, the renewed focus and aggression of Gallagher proved to be overwhelming for Lorcan until Nese tagged himself back into the match. As Nese and Gallagher argued, The Boston Brawler delivered his patented Half and Half to The Premier Athlete and scored the elimination via pinfall.

Following Nese’s elimination, Kanellis argued with Gallagher about taking on Lorcan. The British Superstar relented and Kanellis was met with an explosive set of chops from Lorcan. Fueled by adrenaline and rage, both Superstars exchanged crushing strikes until The Opportunist dropped Lorcan with a superkick. Outside the ring, Nese pulled Gallagher off the apron only to be decimated with a headbutt. As Kanelliss confronted Gallagher, he too was headbutted, allowing Lorcan to score a pinfall and eliminate The Opoortunist.

With the WWE 205 Live originals in disarray, Ariya Daivari charged after Lorcan. The trio of Kendrick, Daivari and Gallagher have a tumultuous history and realized their best course to victory was teamwork. This strategy paid off at Lorcan’s expense, but proving his resilience, Lorcan withstood the opposing offense, eventually making the tag to Isaiah “Swerve” Scott.

Exploding into the contest, Scott matched abilities with The Brian Kendrick and showed off his incredible agility until Daivari saved The Man with a Plan from the offensive onslaught. However, after Gallagher had his way with “Swerve,” Daivari re-entered the match but was tossed into the corner by his bad arm, allowing Scott to score another elimination for NXT.

Kendrick then launched himself into the ring only to be rolled up and eliminated by Scott. Irate, Kendrick and Daivari attacked the remaining NXT Cruiserweights, softening them up for Gallagher.

Wasting no time, Gallagher attacked Scott and Kushida and quickly took the brawl to the outside. Decimating his two remaining opponents, The British Superstar targeted Kushida in the ring. Unable to secure victory, Gallagher grew frustrated and applied his unique technical skills on Kushida. The Japanese Superstar battled through Gallagher’s relentless offense as “Swerve” recovered and the two quickly applied a two-on-one strategy.

Gallagher could only withstand the numbers game for so long before Scott and Kushida delivered a double-team strike in the corner, allowing “Swerve” to execute his cringe-worthy Pop Culture maneuver to his opponent’s arm. Kushida then applied an armbar and Gallagher immediately tapped out, giving the NXT Cruiserweights a hard-fought victory. 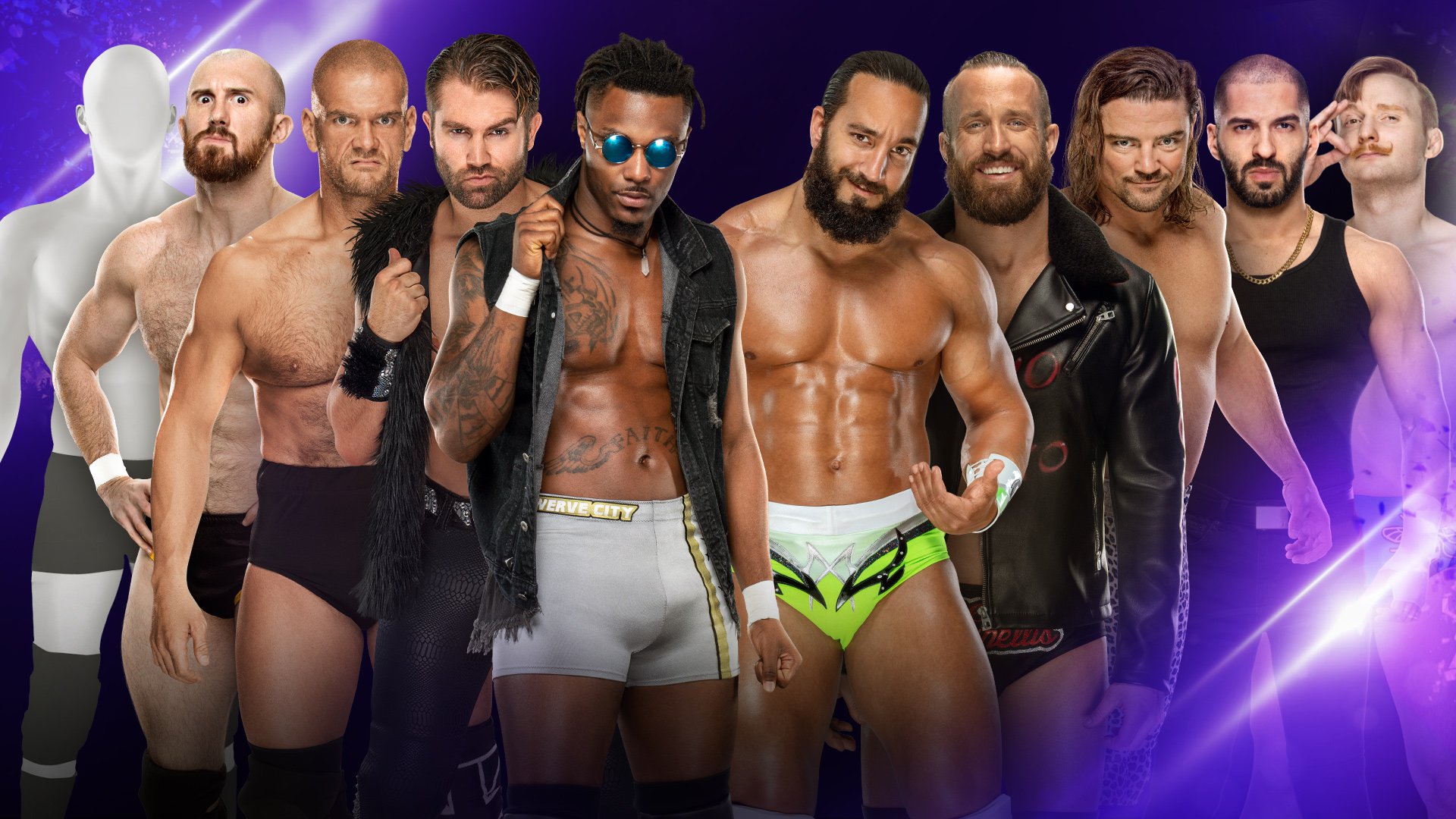 Following Gentleman Jack Gallagher’s shocking attack on Lio Rush two weeks ago on WWE 205 Live, The Man of the Hour has not been medically cleared for competition. As a result, the NXT Cruiserweights have selected a new member of their team, and Isaiah “Swerve” Scott revealed that the team collectively decided it didn’t need a captain. Next week, a mystery partner will join Scott, Tyler Breeze, Danny Burch and Oney Lorcan against Tony Nese and his hand-picked team of Mike Kanellis, The Brian Kendrick, Ariya Daivari and Gentleman Jack Gallagher.

Both teams will collide in a 10-Man Elimination Tag Team Match in the ultimate struggle between NXT Cruiserweights and WWE 205 Live originals. Who is the mystery Superstar? The NXT Cruiserweights know their partner’s identity, will that give them an advantage?