On the final SmackDown before Sunday’s Royal Rumble, Universal Champion “The Fiend” Bray Wyatt turned his Strap Match Contract Signing with Daniel Bryan into chaos. Plus, SmackDown Women’s Champion Bayley brawled with Lacey Evans and so much more. 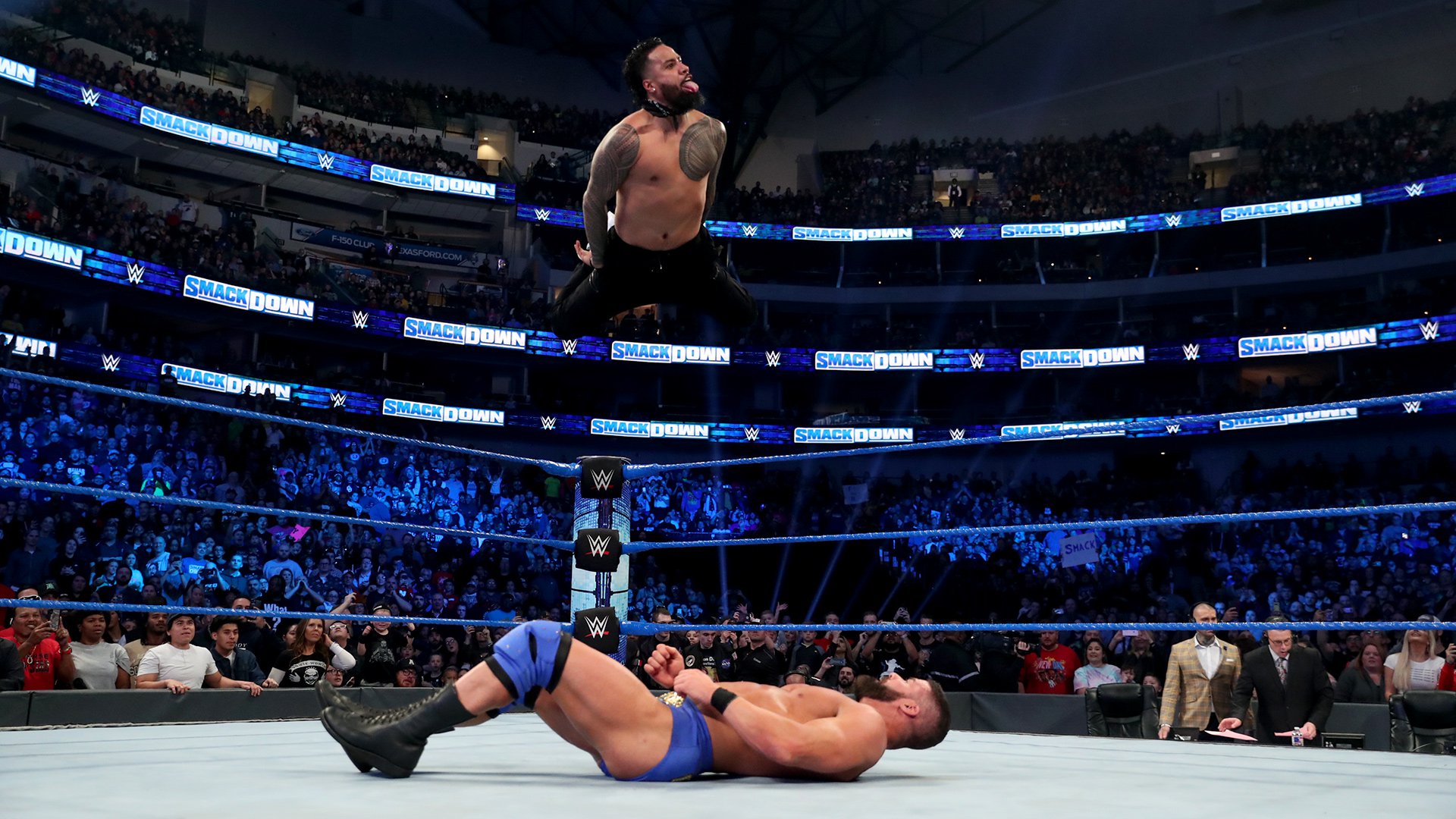 Ahead of Roman Reigns’ highly-anticipated Falls Count Anywhere Match against King Corbin at Sunday’s Royal Rumble, The Big Dog once again joined forces with his cousins The Usos against the dangerous combination of Corbin, Dolph Ziggler & Robert Roode in a Six-Man Tag Team Match.

Things took a dark turn in a hurry, though, when Ziggler suddenly drove Jimmy Uso into the steel steps and the ring post head first outside the ring, taking him completely out of the matchup and leaving Reigns and Jey in a two-on-three disadvantage.

Reigns and Jey battled on in heroic fashion though. And after Jimmy bravely returned in the final moments of the turbulent showdown, Reigns chased King Corbin out into the crowd, leaving Jey to neutralize Ziggler outside the ring and Jimmy to finish off Roode with the Samoan Splash off the top rope for the big victory. 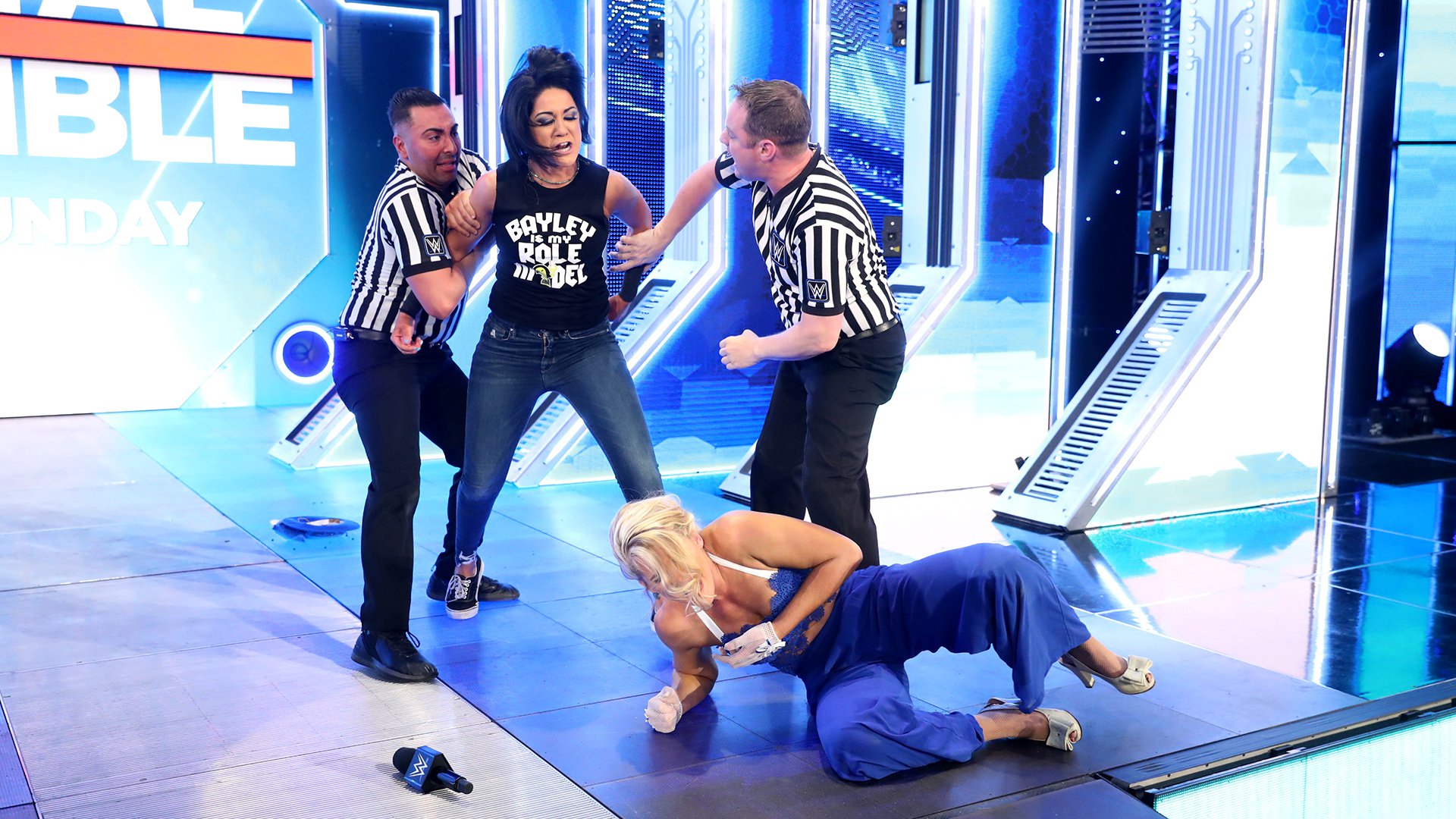 Two days before she will challenge SmackDown Women’s Champion Bayley at Royal Rumble, Lacey Evans sat down for an emotional discussion with Michael Cole to discuss Bayley and Sasha being bullies and showing a lack of locker-room leadership, her own tough upbringing, her service in the Marines and how important it is for her to be an inspiration. After putting Sasha on a shelf for interacting with her daughter, she insisted she would do the same to Bayley at Royal Rumble.

Suddenly, without warning, Bayley attacked The Sassy Southern Belle. As the referees pulled her off their imminent challenger, it was clear that their conflict only intensifies with each interaction.

Moments after this incident, matters turned volatile between Evans and Bayley once more and they brawled backstage during an interview with Carmella and Dana Brooke. 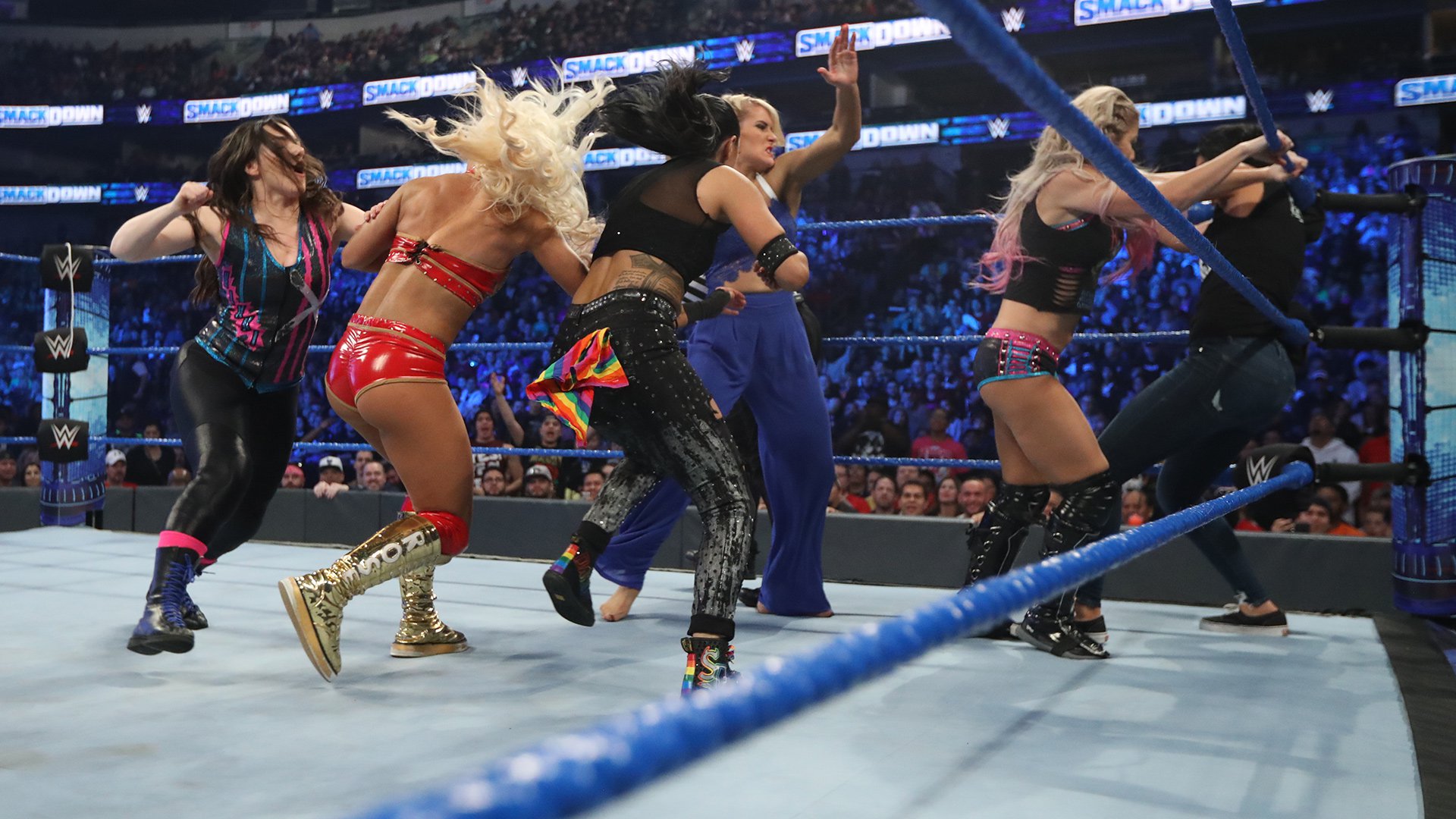 Two weeks ago, Alexa Bliss lost to Mandy Rose after being distracted by Otis coming out to the ring with the cake Mandy had given him. One week later, Sonya Deville asked Mandy to invite Otis to the ring to assist her as well, but that backfired when Sonya lost focus over Mandy getting knocked off the apron into Otis’s arms and caused her to lose her match.

This week, although both Fire & Desire and Bliss & Cross were looking for a decisive “tie-breaking” victory, it was not to be. Just seconds after the tag team match began, the continued brawl between Evans and Bayley interrupted the action, ending the match in a No Contest and leading to all six Superstars brawling it out. 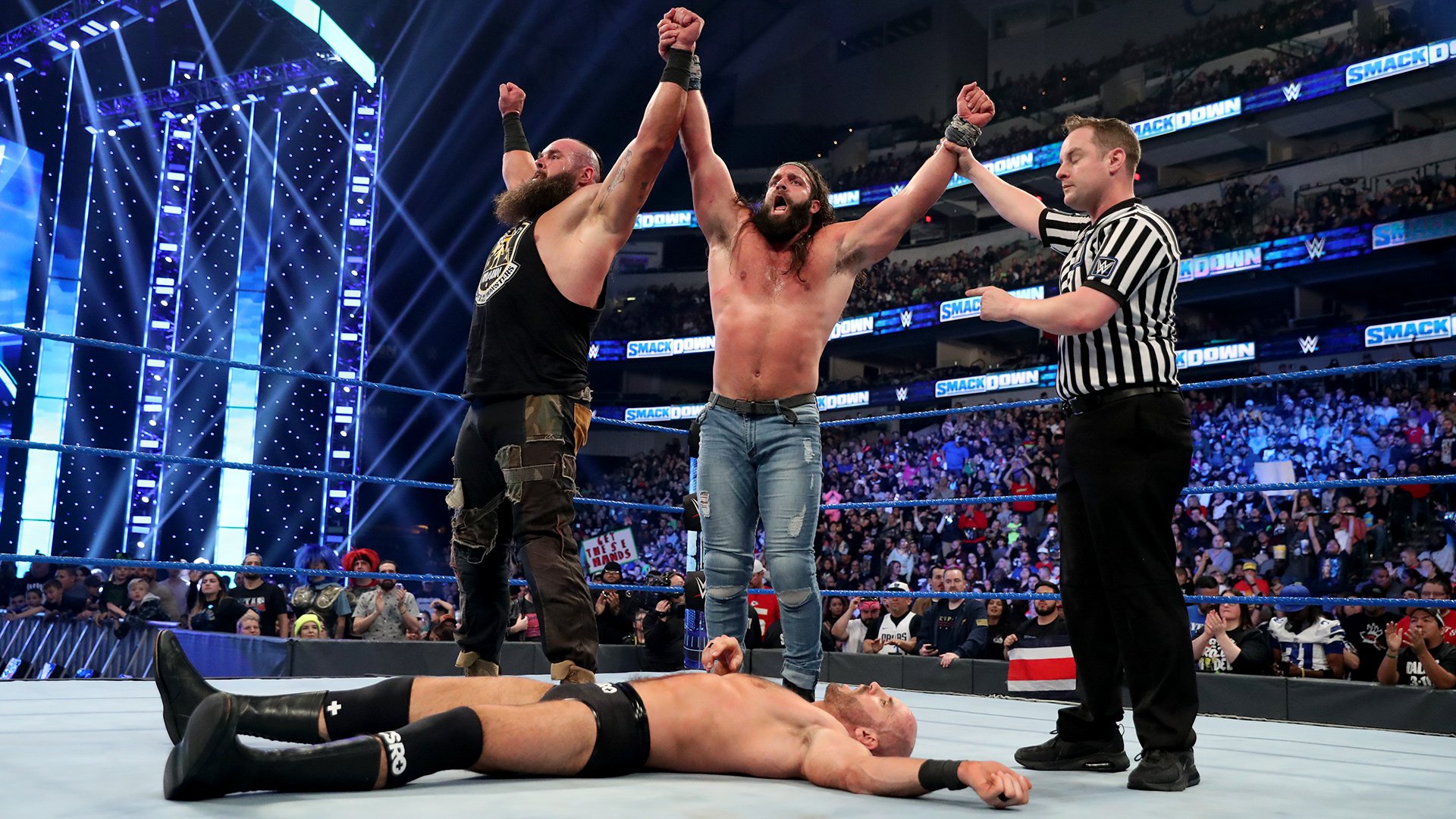 To antagonize matters further, before The Monster Among Men joined Elias in a matchup of redemption this week, The Swiss Superman and the reigning Intercontinental Champion interrupted what was sure to be a very entertaining musical duet between Elias and Strowman.

In the height of the tag team contest that followed, Strowman and Elias made beautiful music nonetheless. The Monster Among Men delivered a powerslam on Cesaro and paved the way for Elias’ elbow off the top rope and the tag team triumph. 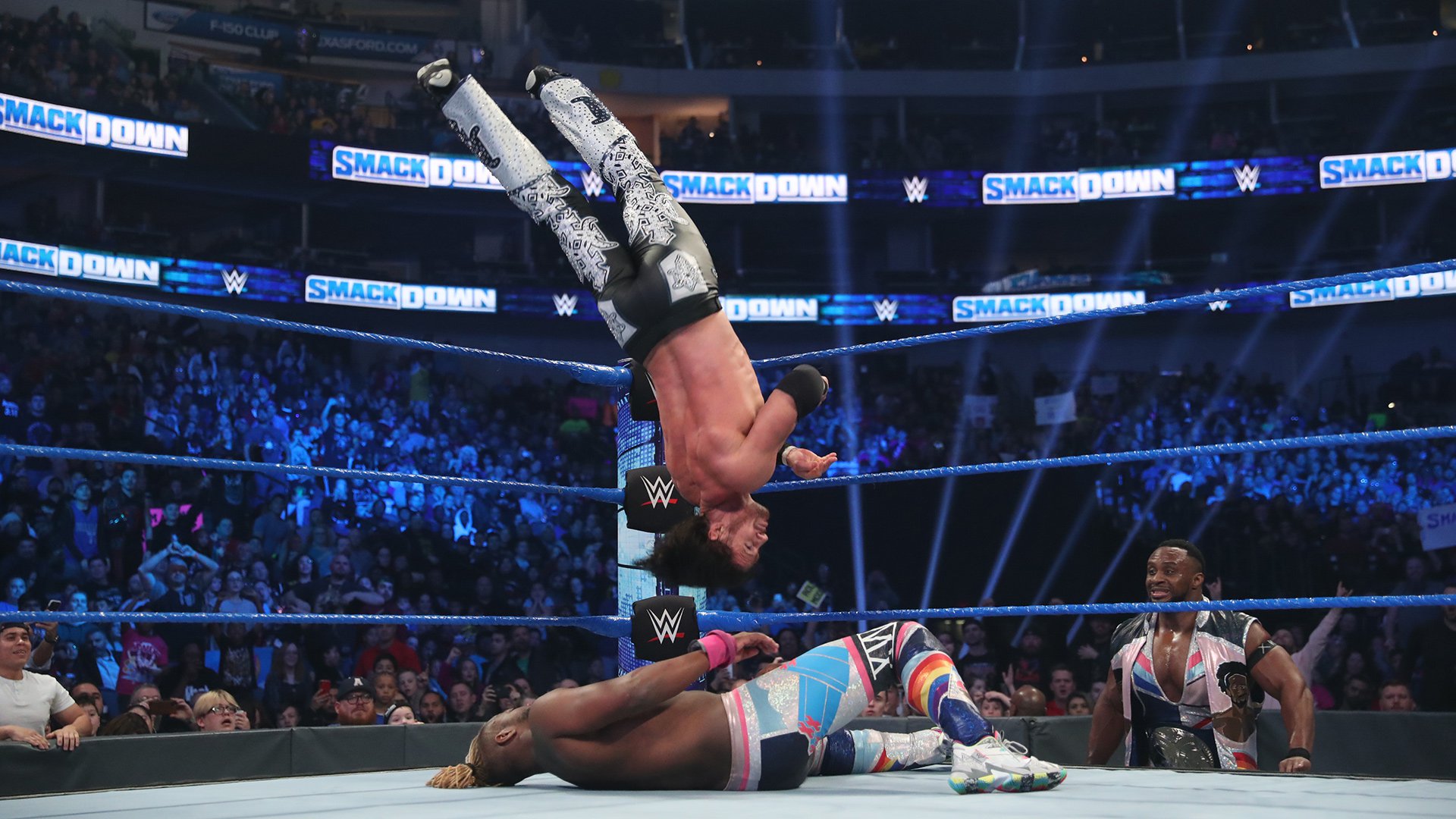 After overcoming Big E last week in his first WWE match in eight years, John Morrison took on Kofi Kingston in an attempt to defeat both SmackDown Tag Team Champions in two weeks’ time and continue his comeback in style heading into the Royal Rumble Match.

In the end of an extremely hard-fought matchup by both competitors, interference by The Miz caused Kofi to turn his attention to The A-Lister. Although he took out the meddling Superstar with Trouble in Paradise, Morrison attacked him from behind and overcame Kingston with Starship Pain. 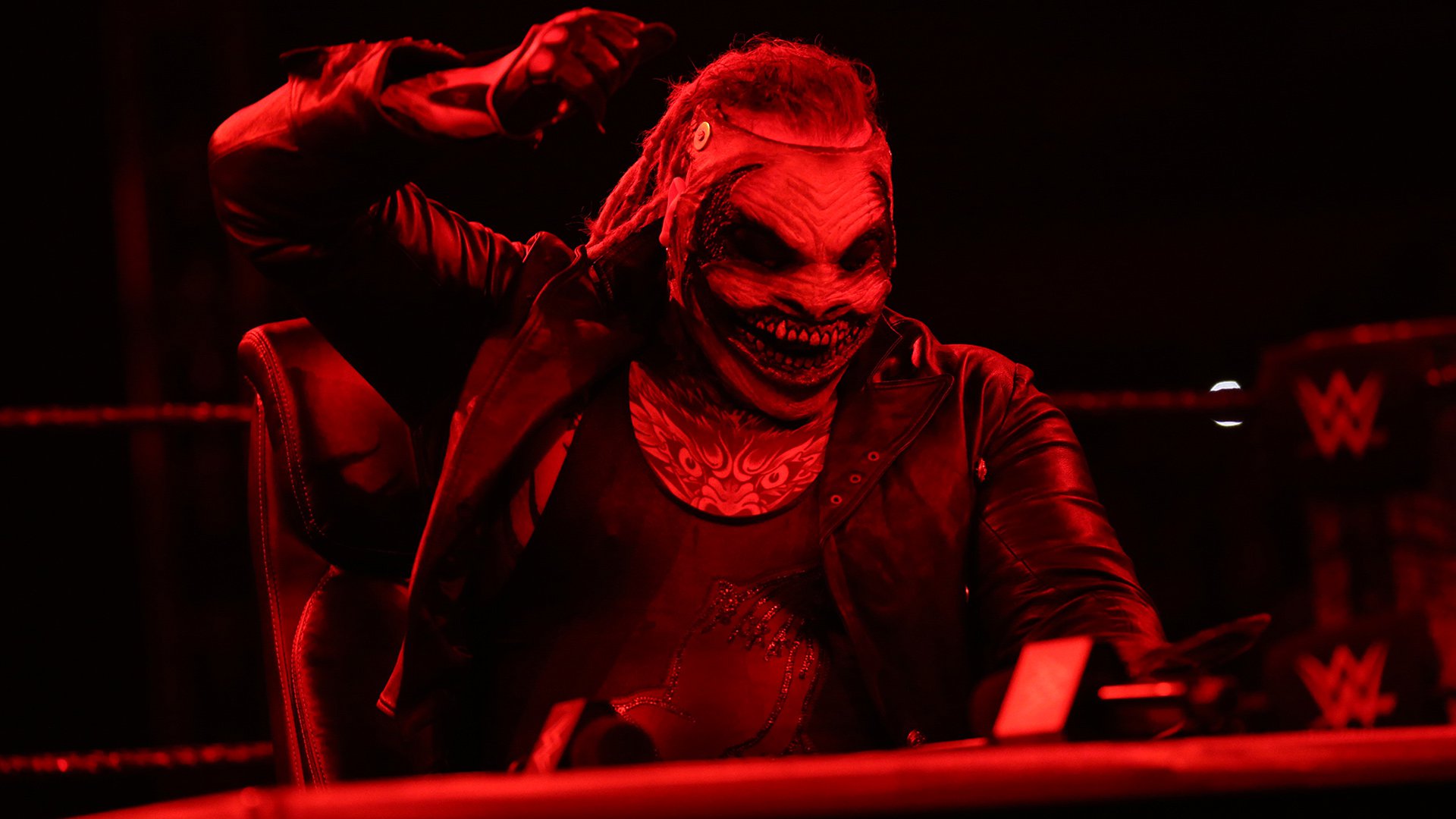 Daniel Bryan emerged to sign the contract and make his Universal Championship Strap Match against “The Fiend” Bray Wyatt at Royal Rumble official. In that match, a strap will be tied to a wrist on the challenger and a wrist on the champion for the entire contest and the winner will only be decided by pin-fall or submission.

However, instead of coming to the ring to sign the contract, a sweater-clad Wyatt appeared in the Firefly Fun House, trying unsuccessfully to fax the contract at the advice of his attorney, Mercy the Buzzard.

As Bryan & Wyatt engaged in a war of words, Bryan wrapped the strap around him, anticipating his showdown with the monstrous titleholder at Sunday’s Royal Rumble.

Finally, Wyatt insisted that the “The Fiend,” and not him, should be the one to sign the contract since he will be competing in the match.

After the lights changed, the monstrous titleholder appeared in the ring holding the other end of Bryan’s strap. After unleashing the Mandible Claw and Sister Abigail and relentlessly using the strap against WWE’s “Yes!” Man, “The Fiend” stabbed himself though the hand several times and signed the contract in his own blood.