Roman Reigns finally got the answer he was looking for when he confirmed that Erick Rowan was indeed responsible for attacking him. The reveal set “The New” Daniel Bryan into a frenzy, exploding on Rowan and attempting to explain to The Big Dog that he had no knowledge of Erick’s motives … but Reigns wasn’t exactly having it. 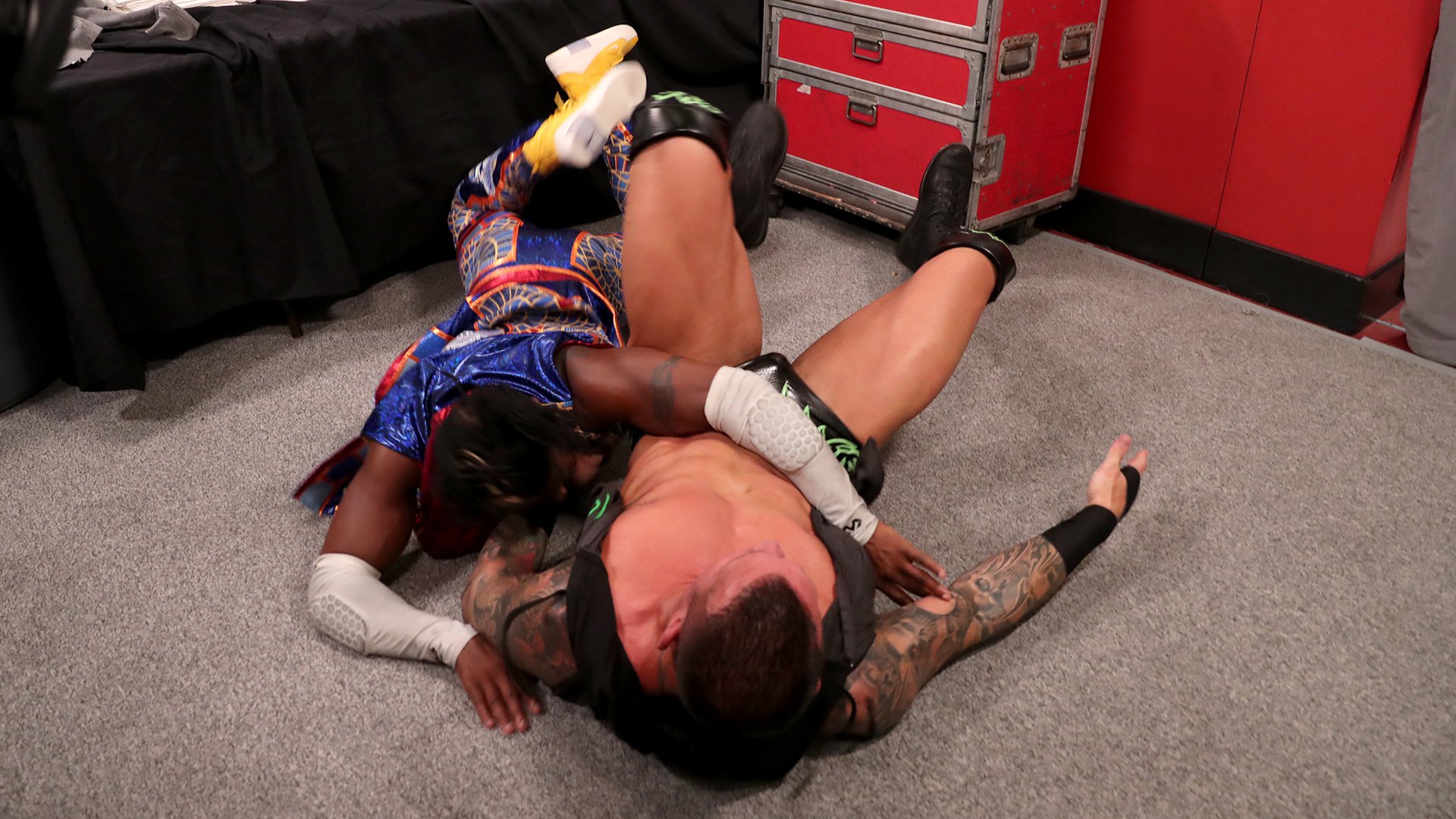 Following Randy Orton’s blatant and aggressive attempts to prey on WWE Champion Kofi Kingston in recent weeks, Kingston kicked off SmackDown LIVE with a clear mission: defend his title against Orton at WWE Clash of Champions so that he could retaliate on The Viper for everything that he’s done to him, his family and The New Day. However, as Kingston would quickly find out, The Apex Predator was ready to stoop even lower.

Orton appeared on the TitanTron, calling Kofi stupid an almost infinite amount of times, with a letter from a young WWE Universe member. The Viper claimed that the letter was from no ordinary young fan, but Kofi’s son, Kai, who was writing Randy to get him to leave his dad alone. Randy read the letter aloud to a seething Kingston and claimed that he was in the same hotel as the Kingston family, and The Viper seemed to revel in the idea of going to see Kofi’s family at the hotel right now.

Kingston darted out of the ring with purpose and met Orton in the backstage area, setting off a wild brawl. Kofi walloped The Viper with several blows, but The Apex Predator soon got the upper hand and DDT’d the WWE Champion off a production crate onto the ground below before WWE personnel intervened and Orton exited.

Kingston was down, and Orton is now up in every facet imaginable as WWE Clash of Champions approaches.

Ali def. Buddy Murphy in the first round of the King of the Ring Tournament 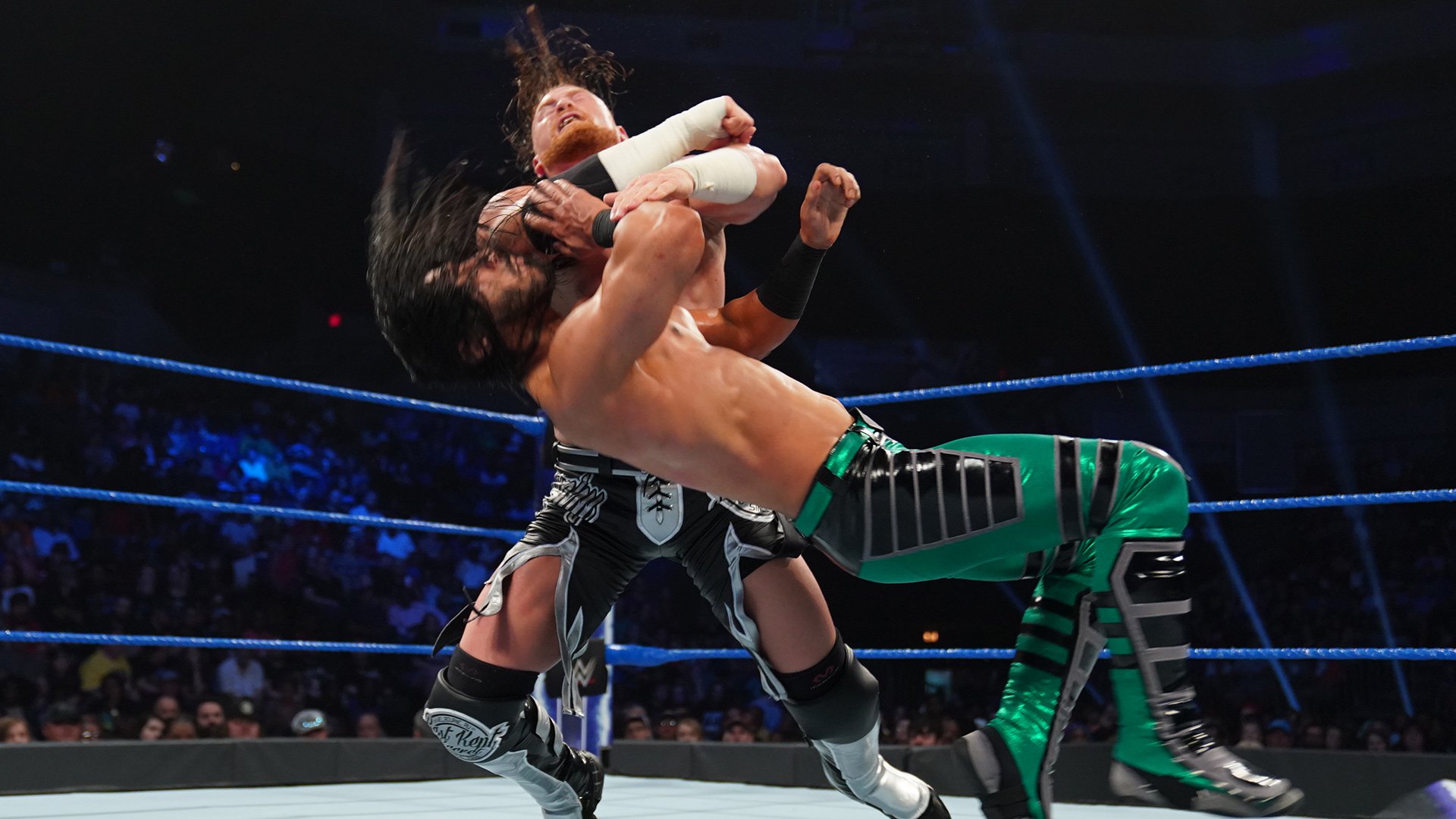 Two surging Superstars collided in the first round of the King of the Ring Tournament as Ali and Buddy Murphy set their sights on the throne.

The two former rivals went absolutely berserk, with such highlights as a dazzling senton dive from Murphy and Ali connecting with an unreal reverse ‘rana. In the critical moments though, Ali weathered an absolute onslaught from Buddy, finding the space to connect with one of the most amazing DDTs you’ll ever see into a dazzling 450 splash, giving Ali one of the biggest wins of his life.

WWE’s Best Kept Secret showed respect where it was due after the thriller, raising Ali’s hand in victory. 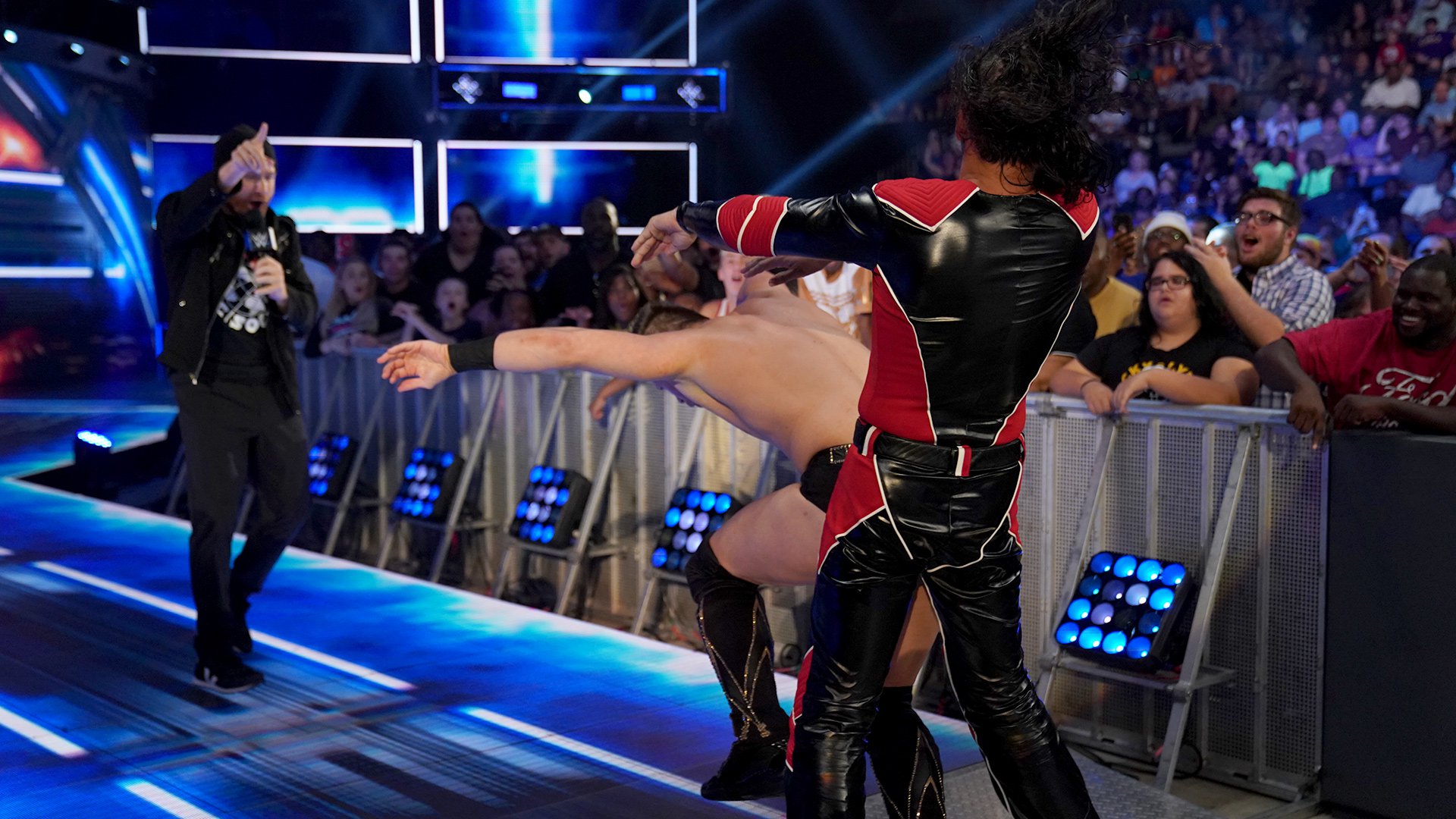 Last week on SmackDown LIVE, The Miz became the first Superstar to feel what Intercontinental Champion Shinsuke Nakamura was capable of with Sami Zayn guiding him as his spokesperson. Tonight, The A-Lister arrived with a challenge for WWE’s Rockstar: Defend the Intercontinental Title against him at WWE Clash of Champions so that Miz could regain the title that he believes he once again made prestigious.

Arriving by his lonesome, Zayn scoffed at the notion that Nakamura or the Intercontinental Title would ever need to associate with Miz to gain prestige and claimed The A-Lister was soft. A laser-sharp Miz darted out of the ring to ”beat some respect” into Sami, but Shinsuke immediately blindsided and pummeled The Miz, laying him out for the second straight week with multiple Kinshasas as a giddy Zayn commented on the microphone in euphoria and held Miz down for the attack. 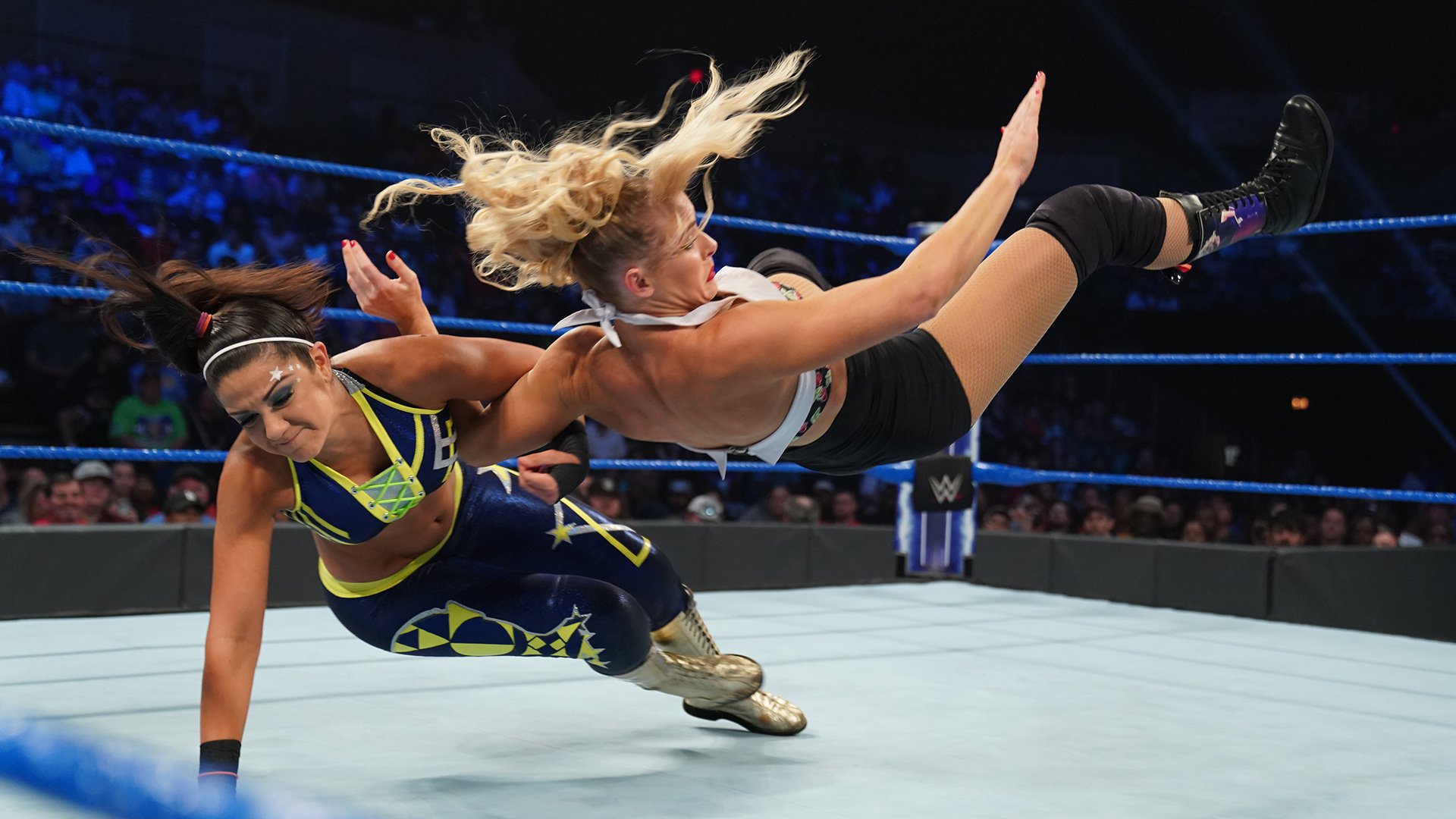 Lacey Evans received a match against Bayley after sharing teatime with WWE management, as The Lady agreed with Charlotte Flair’s assessment that Bayley isn’t up to the high standard of representing the Women’s division on SmackDown LIVE.

Bayley came right at Evans in this non-title matchup, clearly looking to make a statement to Flair ahead of their SmackDown Women’s Title clash at WWE Clash of Champions. The titleholder very soon got the chance to make the statement right in front of her, as The Queen arrived during the contest to get an up-close look.

In the clutch, Bayley fought through the pain of her injured arm, which Evans relentlessly targeted throughout the bout, and planted Lacey with a Bayley-to-Belly, though Evans grabbed the bottom rope during the pin attempt. The Hugger persevered with a second Bayley-to-Belly, followed by a top-rope elbow to score an incredibly gutsy win on the road to WWE Clash of Champions. 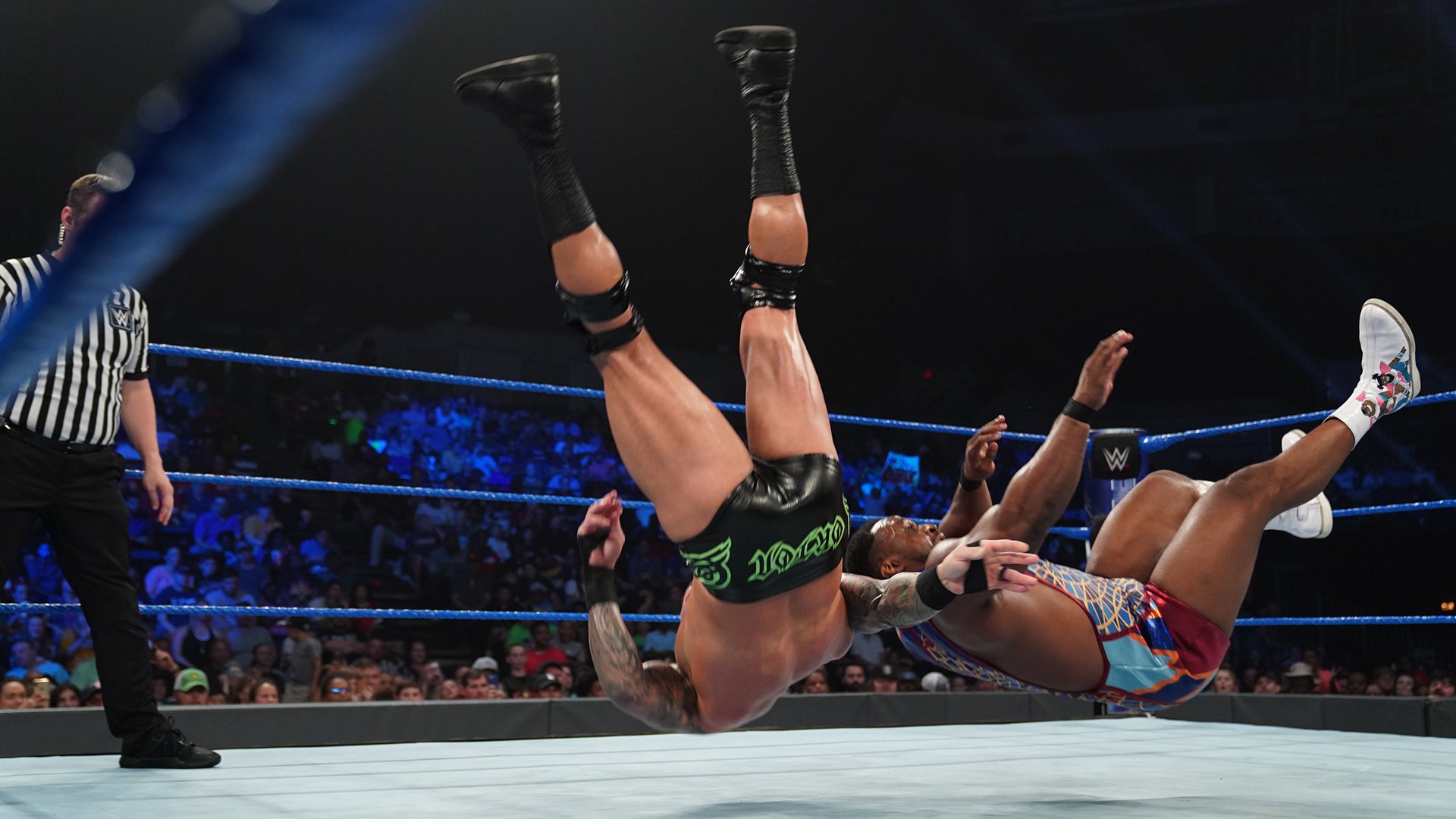 Following Randy Orton’s ominous and haunting words earlier that led to the brutal brawl between he and Kofi Kingston in the evening, a bout between he and Big E was made official, but Big E was tasked with having to fend off more than just The Viper.

Clearly looking to defend the honor of his New Day brother Kofi Kingston, Big E came out of the gates hot, flinging The Apex Predator into the steel steps and hurling him over the announce table. However, the match took a critical turn when Orton raked Big E’s eyes and began to systematically tear him apart. The New Day member refused to let The Viper’s dirty tactics slow him down, but The Revival soon hit the scene and nailed Big E with hits to his head behind the official’s back that opened Big E up to a pinpoint RKO for the victory.

The onslaught wouldn’t end there. With Kofi Kingston receiving medical attention after his earlier brawl with Orton, The Apex Predator and The Revival lifted the already battered Big E for their devastating Super RKO to lay the big man out.

Orton had made his second statement of the night, and neither were particularly kind to The New Day. 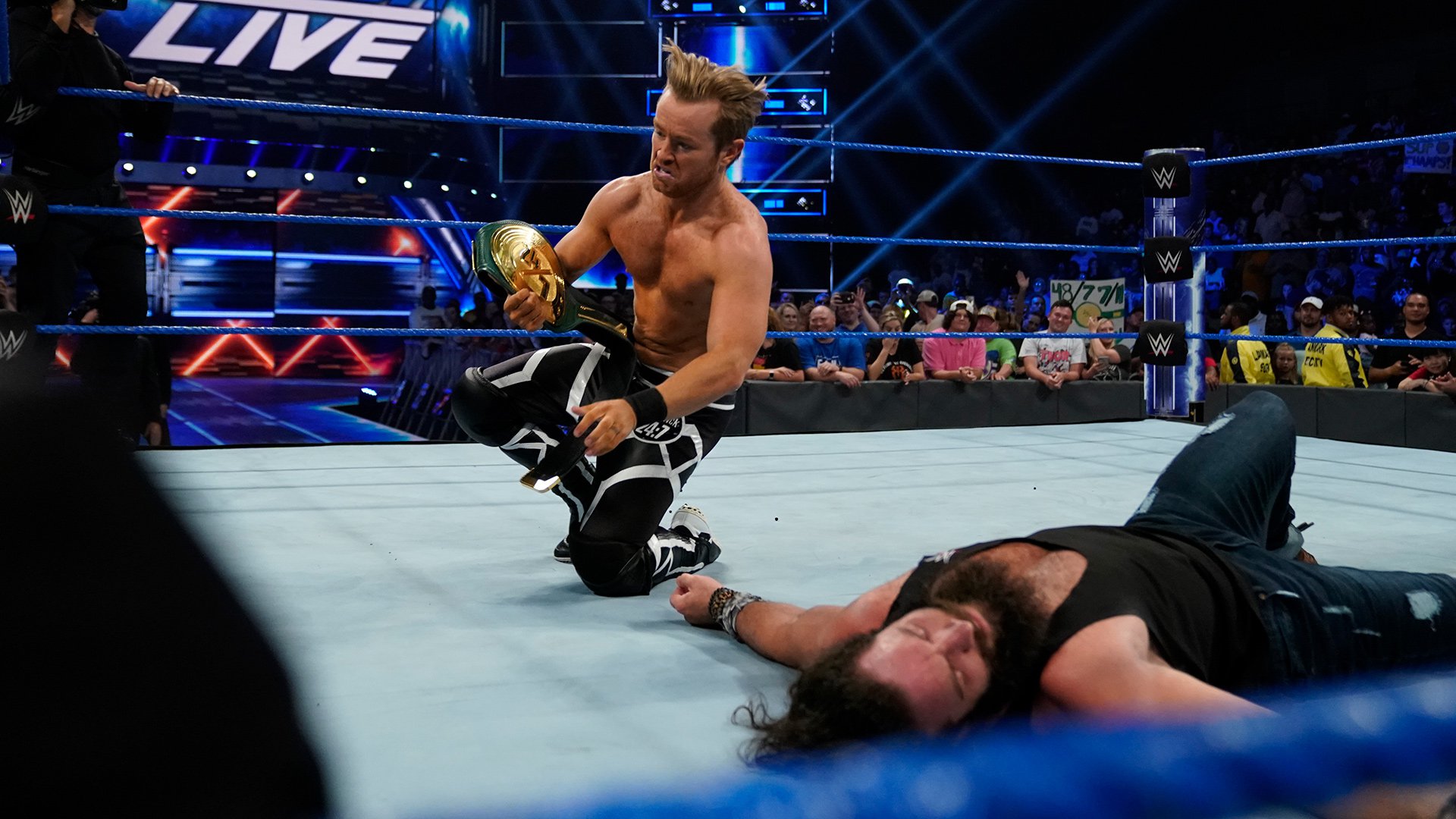 Elias walked into SmackDown LIVE with the 24/7 Championship by his side and sitting atop the King of the Ring throne, attempting to make a bold statement to all those still in his path en route to becoming the King.

But Kevin Owens had bold statements of his own in mind. KO, who was defeated by Elias in the first round of the King of the Ring tournament in controversial fashion last week, soon hit the scene to interrupt his nemesis. To borrow a phrase from “Stone Cold,” Owens proceeded to raise hell, hitting Elias with a Stunner and leaving.

That Stunner opened the door for 24/7 Title bedlam, as R-Truth appeared with a referee in an attempt to capitalize on the fallen Elias. Truth couldn’t seal the deal this time, as Drake Maverick popped up, tossed R-Truth into the ring post and pinned Elias for three to become the new 24/7 Champion… and then got the heck out of dodge and hopefully into a situation that finally results in him consummating his marriage.

Chad Gable def. Shelton Benjamin in the first round of the King of the Ring Tournament 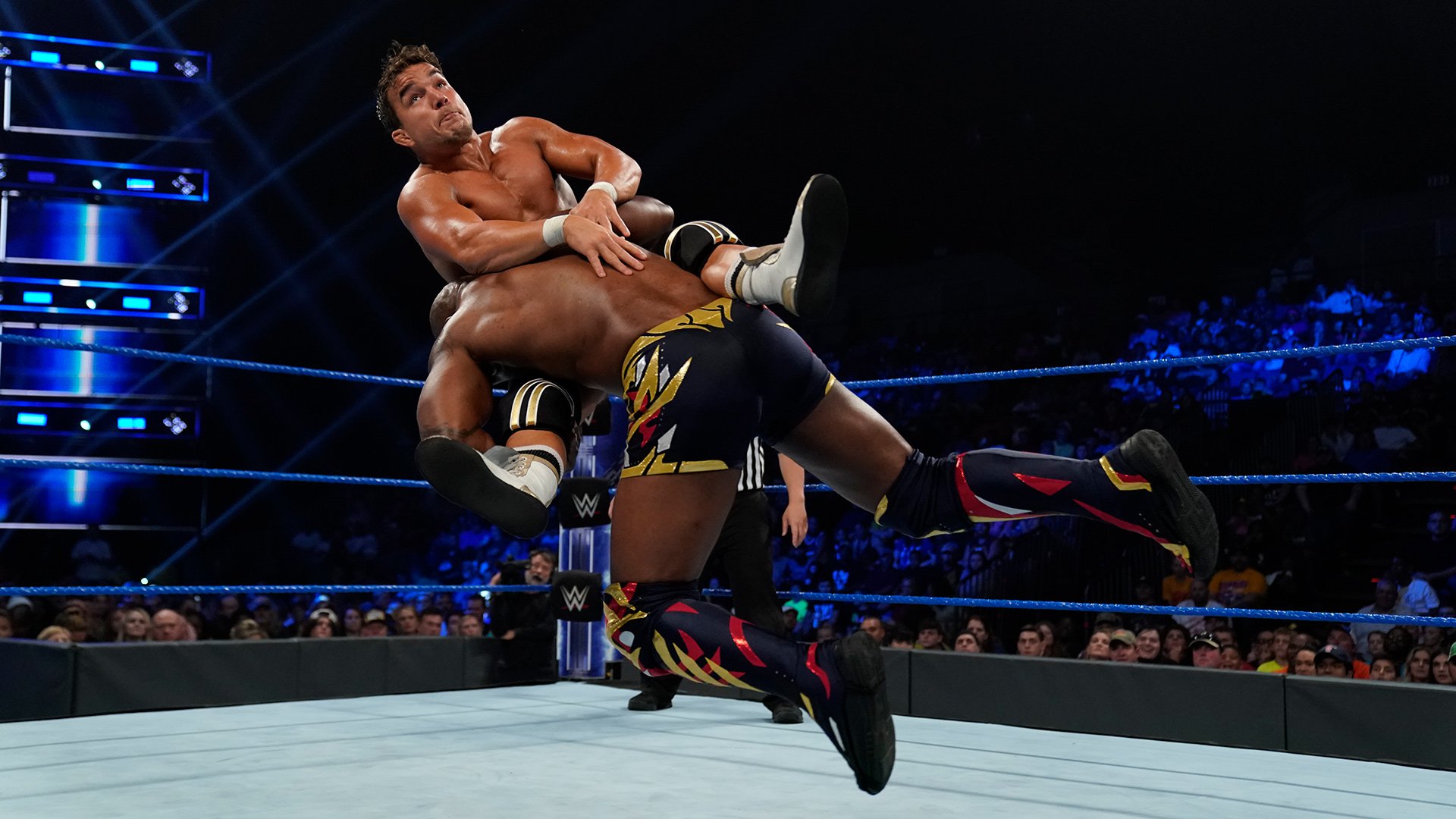 Chad Gable and Shelton Benjamin closed out the first round of the King of the Ring Tournament on SmackDown LIVE, as the two former tag team partners collided to earn the final spot in the quarterfinals.

Benjamin, the crafty veteran, looked to have all his trash talk pay dividends early, coming out strong and applying pressure quick. Benjamin kept up the insults as the match progressed, until Gable could simply not take it anymore, unleashing on Shelton with a barrage of offense. From there, the two would go back and forth in an ultra-physical contest until Gable was able to counter Shelton with an impressive rollup that would secure the three-count and the chance to still be the next King of the Ring. 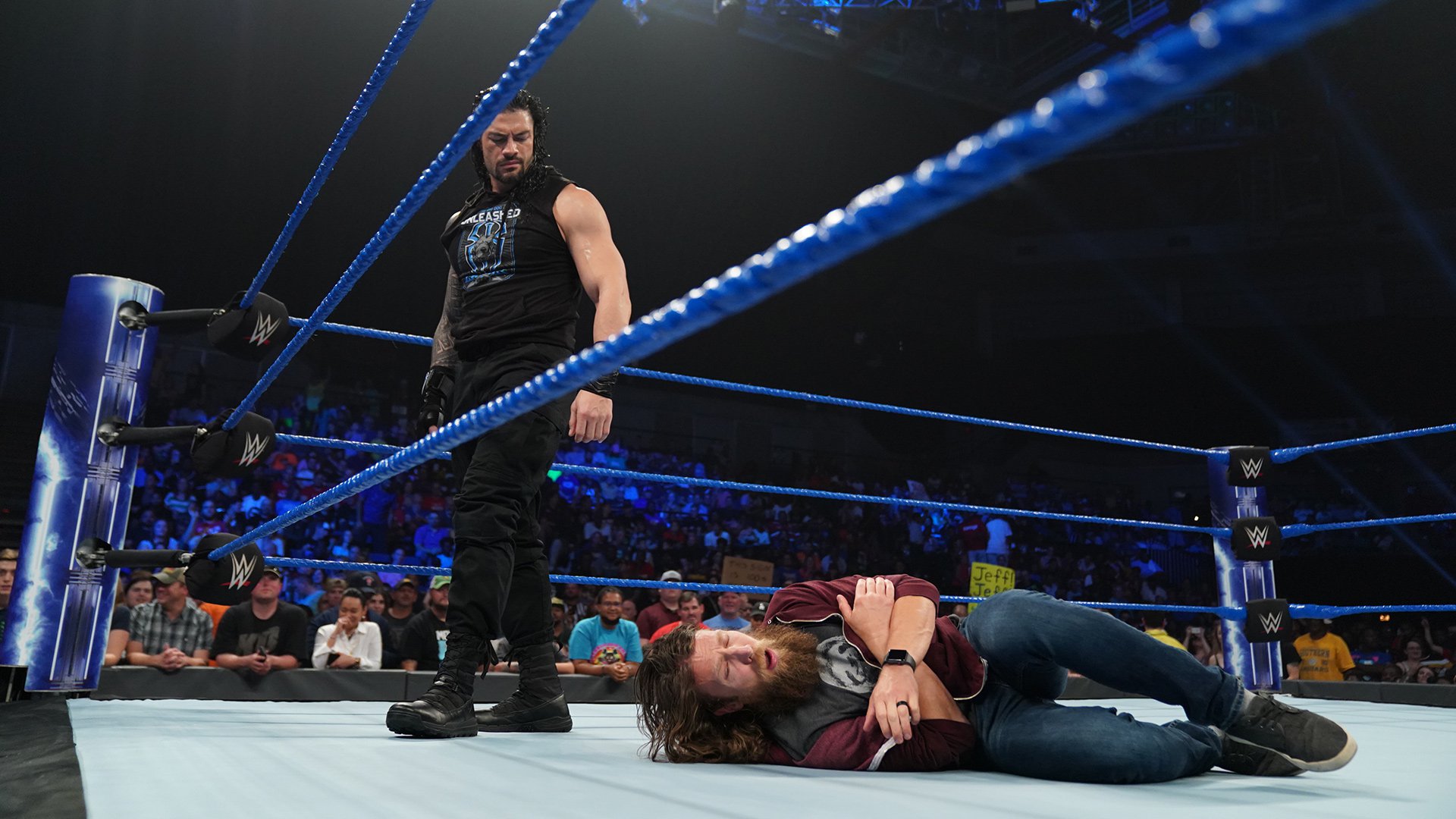 Daniel Bryan & Erick Rowan wanted an apology from Roman Reigns … but that’s not exactly what went down.

Before Roman could get a word out after hitting the ring, Bryan & Rowan appeared on the TitanTron and yet again prompted The Big Dog to apologize. Reigns, however, had different ideas. He rolled a video that clearly showed that Erick Rowan was responsible for the first attack on Roman.

Bryan exploded, slapping Rowan repeatedly and telling him to get out of his sight. Bryan lost it on the microphone, screaming that he hates liars and suggesting that someone must have put Rowan up to going after Reigns. However, before Bryan could explain further, Reigns dropped Bryan with a brutal Spear, making it clear that he had no interest in any explanations tonight.