NXT UK TakeOver: Cardiff kept the WWE Universe on the edge of their seats with new NXT UK Women’s and NXT UK Tag Team Champions crowned, as well as countless stunning moments throughout the action-packed event. 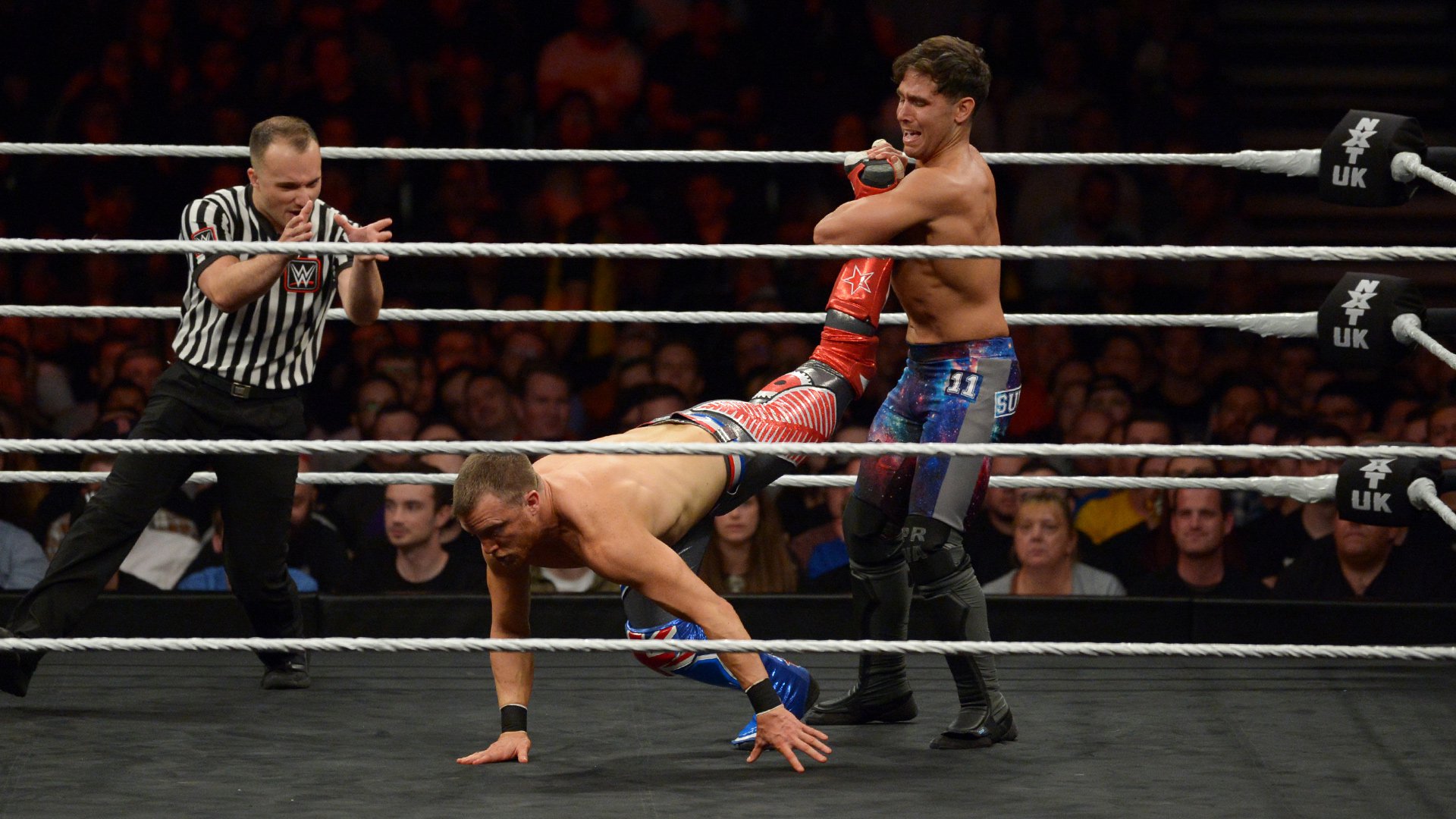 Although Travis Banks missed the inaugural NXT UK TakeOver in Blackpool after being attacked by Jordan Devlin back in January, The Kiwi Buzzsaw journeyed to Cardiff ready to take full advantage of the big TakeOver stage against the outspoken Noam Dar.

In the early moments of an explosive contest, Banks seemed to injure his shoulder as well as his knee, and Dar attacked the weak spots like a shark that smelled blood. But the resilient Banks battled through the pain, opening the door for both skilled competitors to leave it all on the mat with an inedible display of high-octane offense that produced near-fall after near-fall. Banks got within an eyelash of victory when he tattooed Dar with a Slice of Heaven off the ring barricade before executing a double stomp off the top rope, but Dar kicked out at the last possible second.

When Banks tried for another Slice of Heaven, The Scottish Supernova tripped him up on the ropes before putting him away with a pinpoint Nova Roller for the three-count. 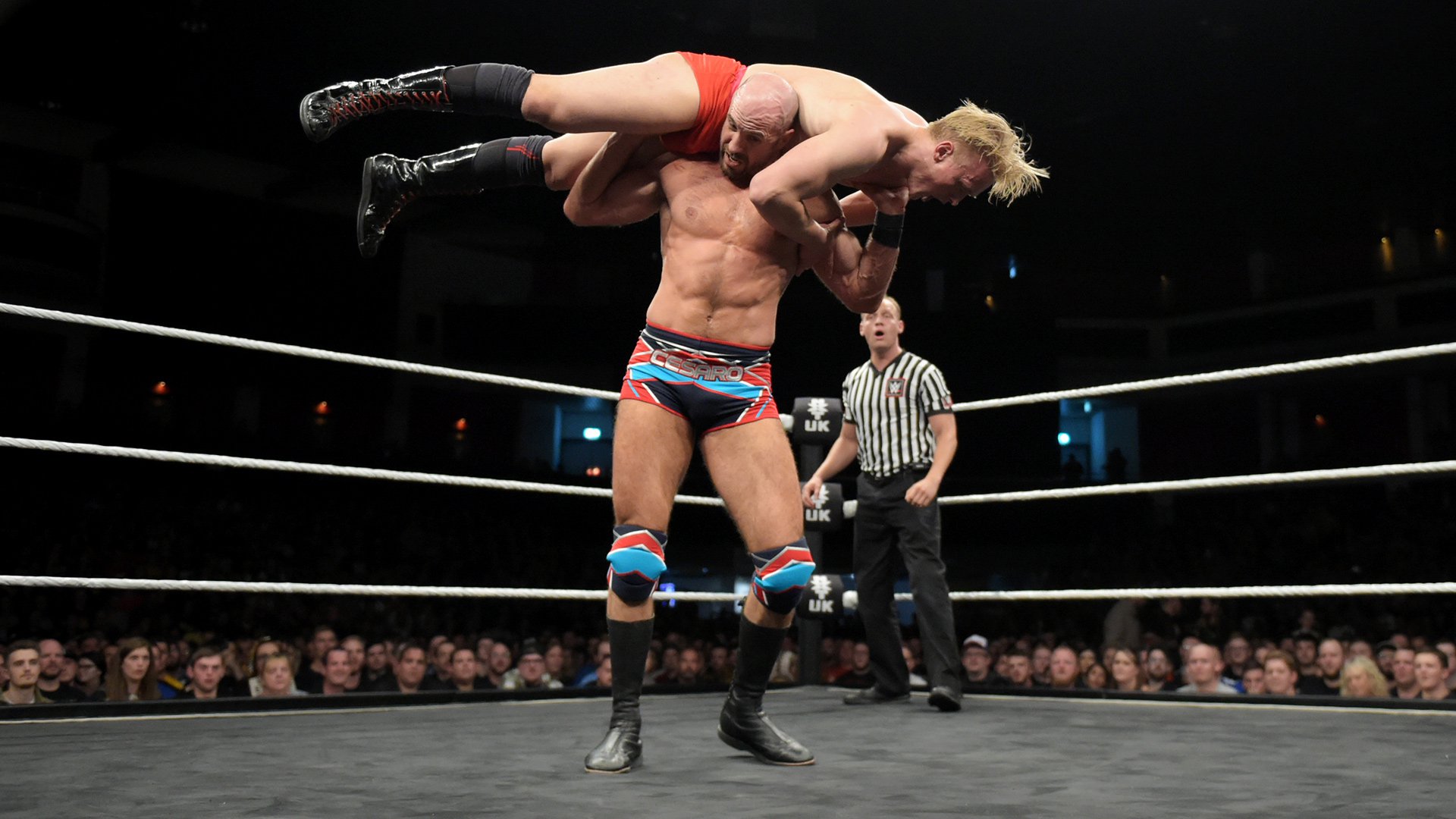 Earlier this week, Cesaro informed the WWE Universe that he was coming to NXT UK TakeOver to take a “hands-on approach.” After Cesaro emerged in Wales to issue an open challenge, Ilja Dragunov answered the call, and the stage was set for an impromptu showdown between the highly decorated WWE Superstar and the NXT UK upstart.

Cesaro took the early upper hand, unceremoniously tossing Dragunov over the top rope and out to the hard ringside floor and spinning him in the Cesaro Swing to the tune of 40 rotations!

Dragunov fired back with a fury, as both men unleashed a series of high-impact maneuvers that thrilled the Wales fans.

When Dragunov appeared to be going for the Tornado Moscow in the final moments, Cesaro suddenly countered, throwing his opponent into the air and catching him with the uppercut on the way back down before finally finishing him off with the Neutralizer.

Although it looked as if Cesaro was going to execute a post-match attack on the defeated Dragunov, he stopped short to shake his hand and embrace him instead. (Holy) Moscow indeed! 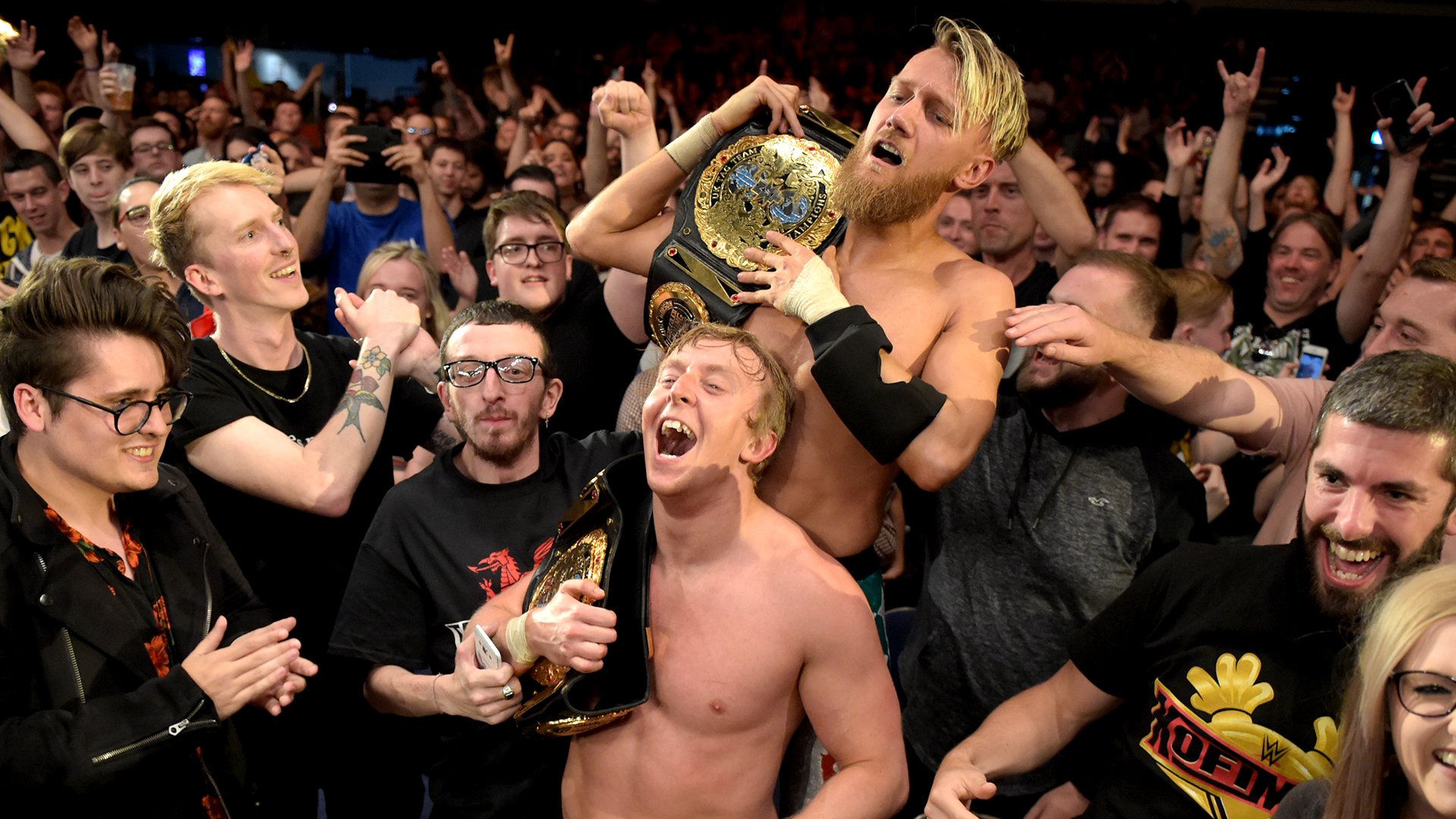 When Flash Morgan Webster returned from injury, NXT UK General Manager Johnny Saint decreed that he and Mark Andrews would have to earn a title match and that winning a pair of singles matches would be the only way to do so.

In the three-way tag team encounter that followed, the distinctly different tandems fought tooth-and-nail in a back-and-forth struggle for momentum inside and outside the ring that garnished near-falls for each team and truly reflected the magnitude of the prize at stake.

Moments later, he and Drake capitalized when they hit a Ticket to Mayhem that looked like it would be the decisive blow. When Gibson instructed Drake to dive out of the ring to flatten Gallus and prevent them from breaking up the pinfall, however, he left himself open for Andrews to hit Fall to Pieces. Gibson never saw him coming, and the awe-inspiring maneuver cleared the way for the boys from Wales to emerge triumphant before their electrified home crowd!

The thrilling title victory means Webster & Andrews have made history, as they are the first Welsh-born champions in WWE history. 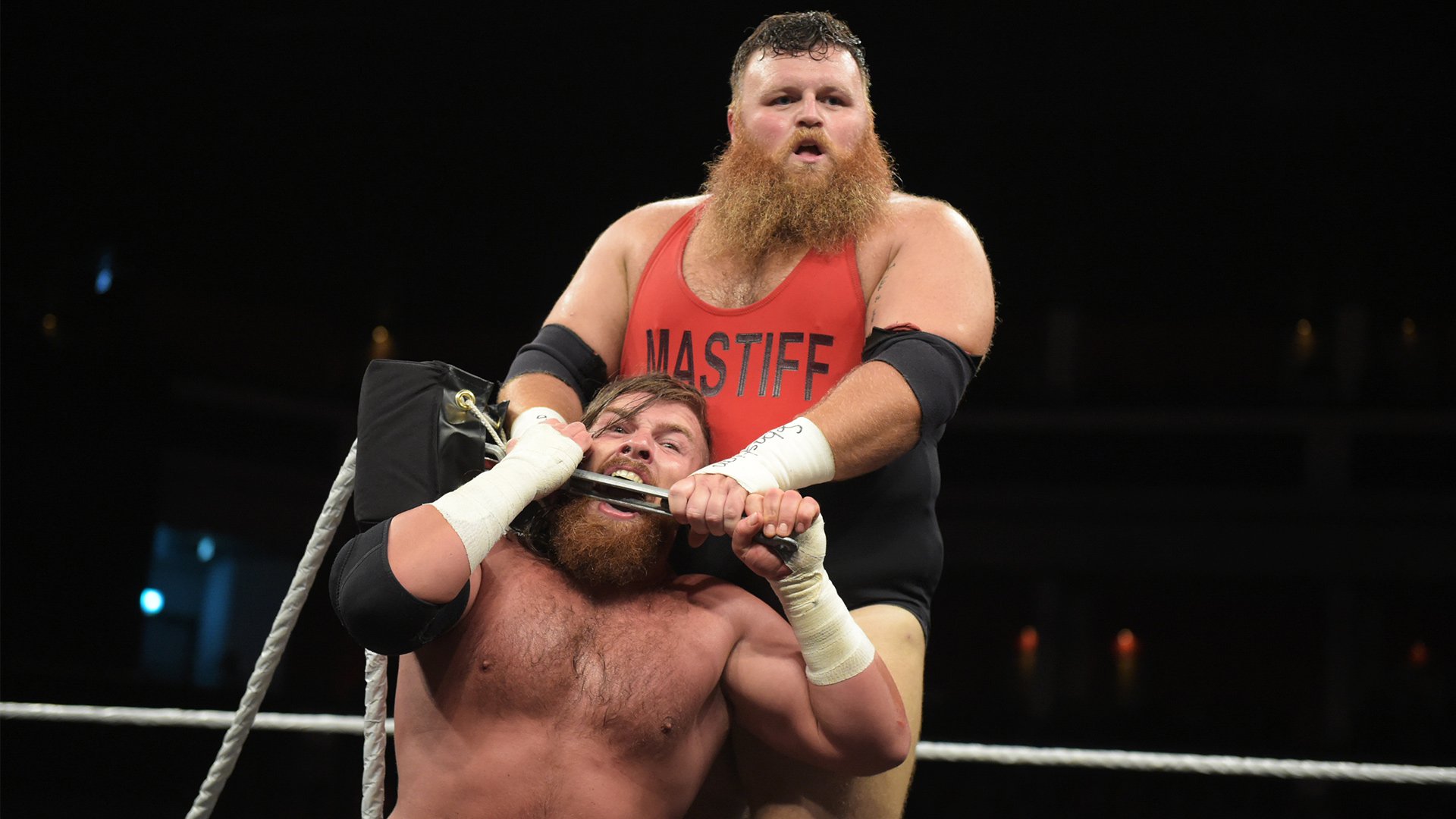 After Dave Mastiff and Gallus’ Joe Coffey each sustained injuries during their last legendary encounter which ended in a double count-out, General Manager Johnny Saint and Assistant to the General Manager Sid Scala decided that the only way to settle things and assure a clear winner would be a Last Man Standing Match at TakeOver.

With all the rules out the window, the mammoth competitors began throwing their weight around right from the opening bell, as Mastiff hurled Coffey into the turnbuckles and caused the top rope to break in the first minute of the bout.

Coffey soon introduced a series of Gallus-approved weaponry — a pool cue, a cricket bat, a table and a steel chain — and both massive competitors used them in a series of brutal attempts to secure the 10-count victory.

When the carnage moved into the NXT UK Universe, the two titans charged at each other through the aisle with steel chairs in hand and collided full force. As both mastodons climbed onto the announce table, Mastiff drove Coffey’s chest onto the hardwood.

In the final moments of the absolute bedlam, Mastiff and Coffey battled high atop the Pre-Show platform before a headbutt from Mastiff sent both competitors sailing through the air and crashing through two tables and to the hard floor below. In the aftermath of the fall, both men struggled to get back to their feet, but before Mastiff could pick himself back up, Coffey pushed the box supporting Mastiff’s weight out from under him at the crucial count of nine to send Mastiff back to the floor, giving the brutal win to The Iron King. 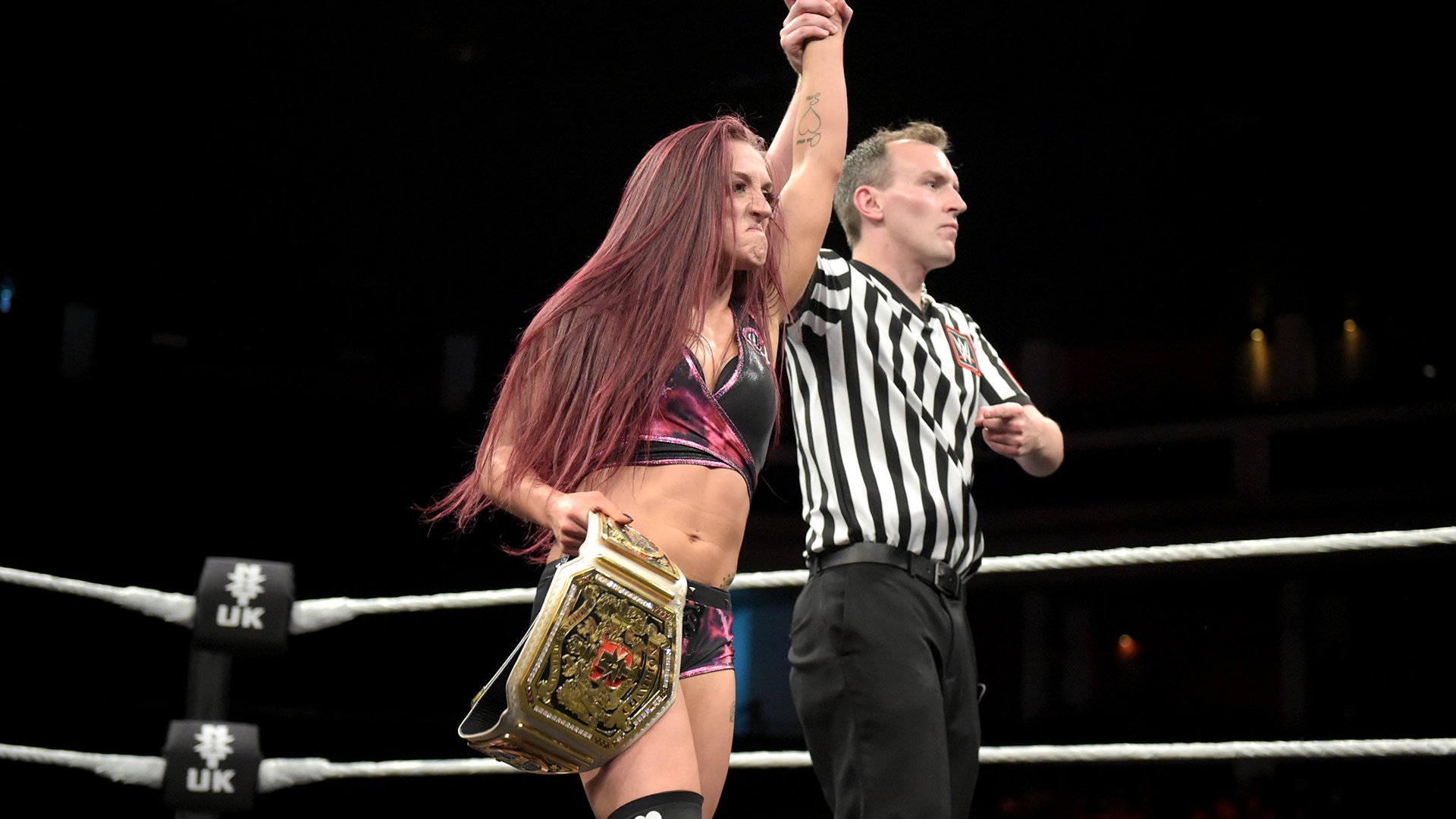 Kay Lee Ray earned her opportunity to challenge her one-time friend Toni Storm for the NXT UK Women’s Title by surviving the first-ever NXT UK Women’s Battle Royal, but the devious challenger waged war against the titleholder with a series of anything-goes mind games in the weeks leading to TakeOver, throwing their friendship out the window.

From the start, Storm had a different look in her eye in the highly personal showdown, as she attempted to make Ray pay for her words in recent weeks. The crafty Ray roared back, however, and the fiery showdown featured no shortage of haymakers and edge-of-your-seat moments, as Storm and Ray narrowly kicked out of each other’s finishing maneuver to the shock of the WWE Universe.

Ray came through in the clutch when she locked in the Widows Peak for the third time in the match and drove Storm’s face into the canvas to pick up the monumental three-count and become the new NXT UK Women’s Champion. 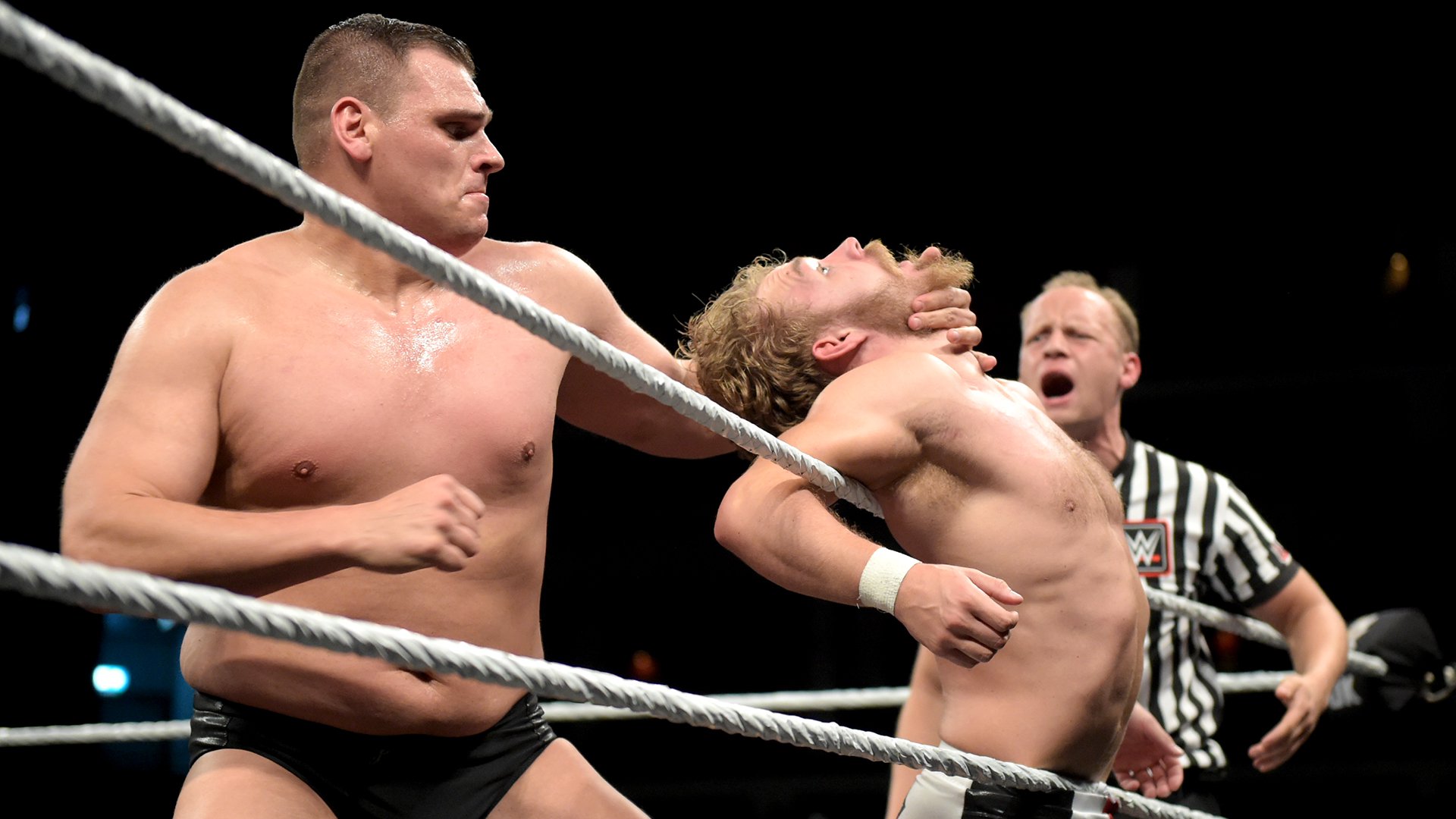 The main event of NXT UK TakeOver: Cardiff was more than a contest for the WWE United Kingdom Title; it was a battle for the very heart and soul of NXT UK, pitting the leader of Imperium WALTER against Moustache Mountain’s Tyler Bate.

The match was a true battle of intestinal fortitude and pure guts as both competitors kept the pedal to the metal from start to finish and gave every bit of themselves for 40 minutes of pure mayhem.

At the start, Bate stayed with the physically imposing titleholder with maneuvers like the big slam — the first of many incredible feats of strength by the challenger — and an electric hurricanrana. When he dove at the massive Ring General through the ropes, however, WALTER caught him, hurled his prey onto the ring apron with a massive powerbomb and began decimating Bate inside and outside the ring.

No matter what was thrown at him, the relentless Bate fought back with incomparable desire. The leader of Imperium continued to punish his challenger with an arsenal that included countless vicious chops and submissions like the Boston crab, a crossface and a three-quarter nelson from the back.

The remorseless champion continued to punish his foe with a series of excruciating sleepers and a sleeper suplex that served as a precursor to WALTER dropping down on his prey from the top rope, the same sequence that nearly destroyed Pete Dunne. Still, Bate refused to quit, firing back with efforts like an exploder suplex off the apron that sent WALTER crashing down to the ringside floor, a superhuman suplex, the airplane spin, the Burning Hammer, another exploder suplex off the off the top rope and the Tyler Driver, all of which nearly allowed him to become the first two-time United Kingdom Champion.

Finally, after both competitors left every bit of themselves on the canvas, a thunderous clothesline from WALTER finally brought down Bate for the three-count in a struggle that will go down as a match for the ages.

Now that WALTER has conquered Bate, who will oppose the dominant champion and the rest of Imperium, who have taken full control of NXT UK?