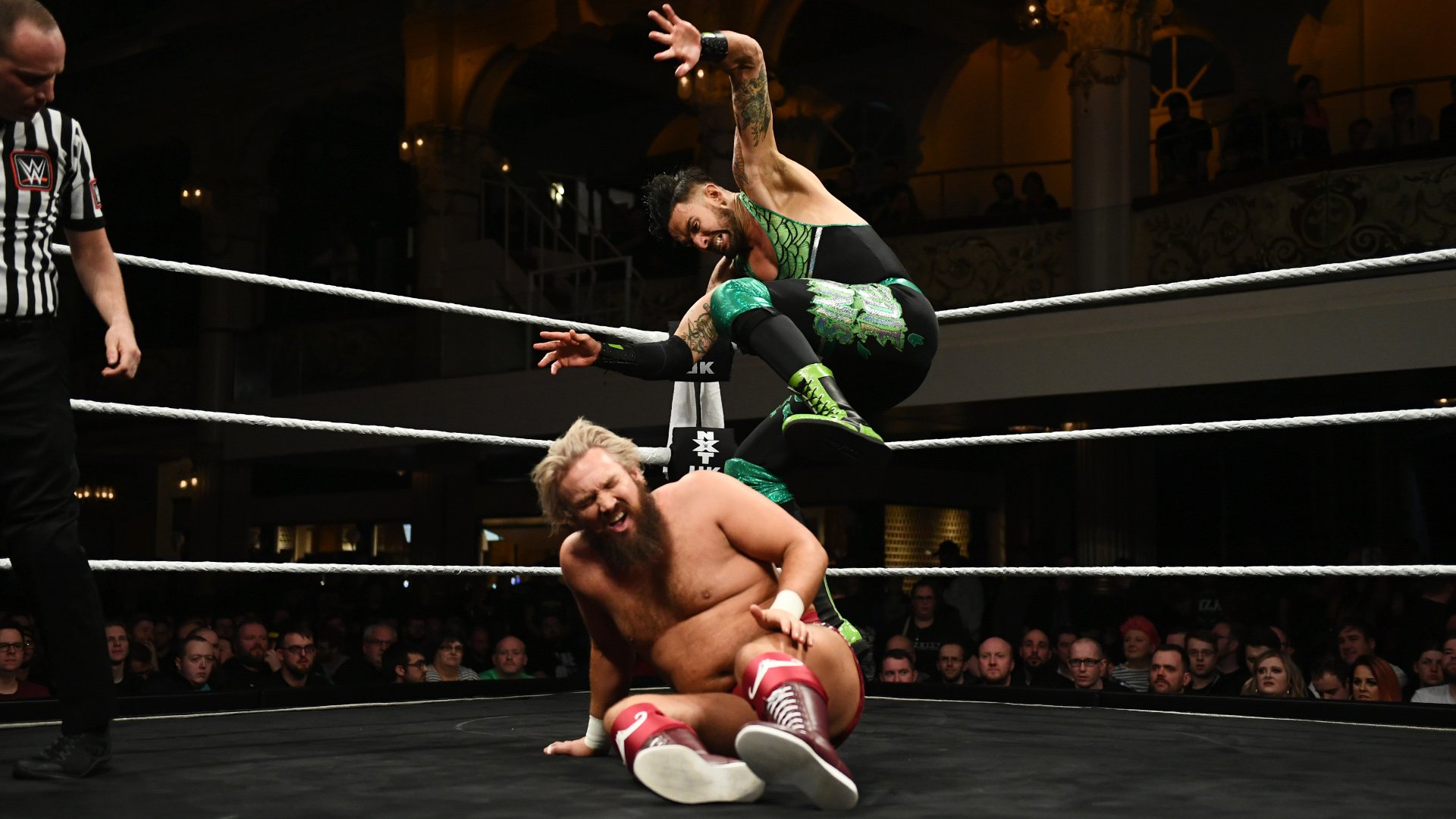 If Eddie Dennis sought to make a name for himself at Trent Seven’s expense, consider it a success. The former Headmaster knocked off The Big Strong Boi at TakeOver: Blackpool II for one of the biggest victories of his career.

Overwhelming Seven early with an intense onslaught, including a massive Severn Bridge, Dennis tried to secure a quick victory with several early pinfall attempts. The Artful Dodger rallied with a tope suicida and snap dragon suplex on the outside of the ring, and from there, much of the action was a back-and-forth affair.

That was until Seven collided face-first with a top turnbuckle exposed by Dennis. The impact put the former Headmaster in position to deliver another Severn Bridge — but one that was significantly more devastating as it launched Seven over the top rope into the barricade for an unbelievable sight.

Seven somehow found a way to get his shoulder up on the ensuing pinfall attempt, but didn’t have anything left to kick out after Dennis’ Next Stop Driver moments later. 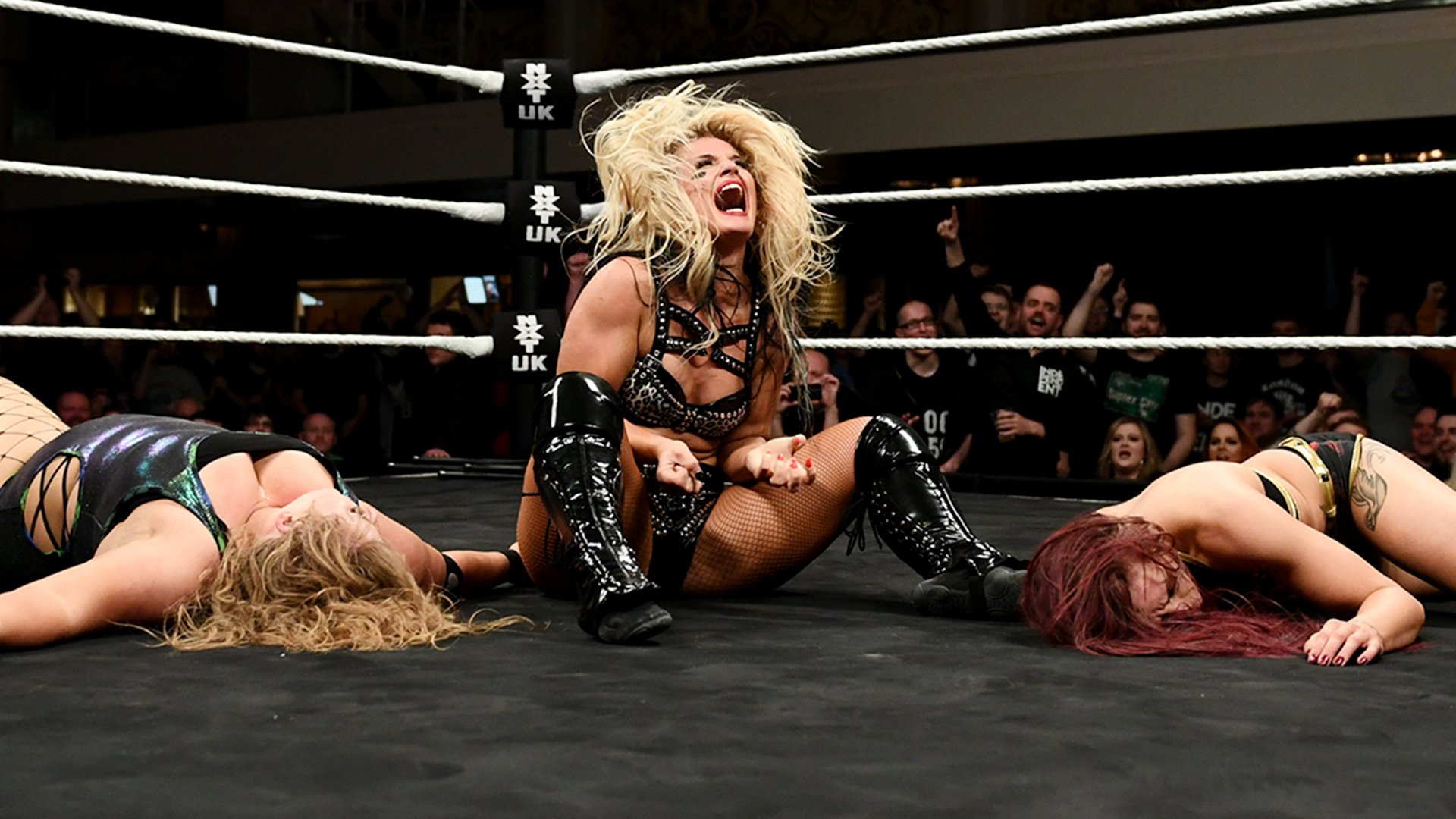 After warding off worthy challenges from two bitter foes, Kay Lee Ray remains NXT UK Women’s Champion. The Queen of Scots got the better of Toni Storm and Piper Niven in a fast-paced encounter from the opening bell, beginning with Storm’s immediate attack on the defending champion before she could even remove her robe.

Wielding a steel chair, Kay Lee Ray exploited the no disqualification circumstances, wedging it into both Storm and Niven’s necks in succession. The Queen of Scots looked to escalate the brutality when she wrapped the chair around Storm’s head before Niven saved her from what likely would have been a career-threatening act.

Storm grabbed the chair moments later and exchanged words with Niven, while Kay Lee Ray happily watched. But instead, Storm ditched the chair and the two former allies brought the fight to the champion.

The partnership disintegrated shortly thereafter though, and the Queen of Scots exploited their infighting to hit a senton to both on the outside

The champion wasn’t the only one to capitalize on the rules. Storm’s obsession with regaining the title reared itself in an uncharacteristic move when she grabbed the official’s arm before he could count Niven’s shoulders down after Kay Lee Ray hit the Widow’s Peak/Gory Bomb combination.

Storm seemed set to regain her coveted title after hitting Niven with a rafter-kissing frogsplash, but the Queen of Scots swooped in with a perfectly timed super kick to steal the victory and retain her championship.

Tyler Bate pushes the limits with Jordan Devlin in an instant classic at TakeOver: Blackpool II 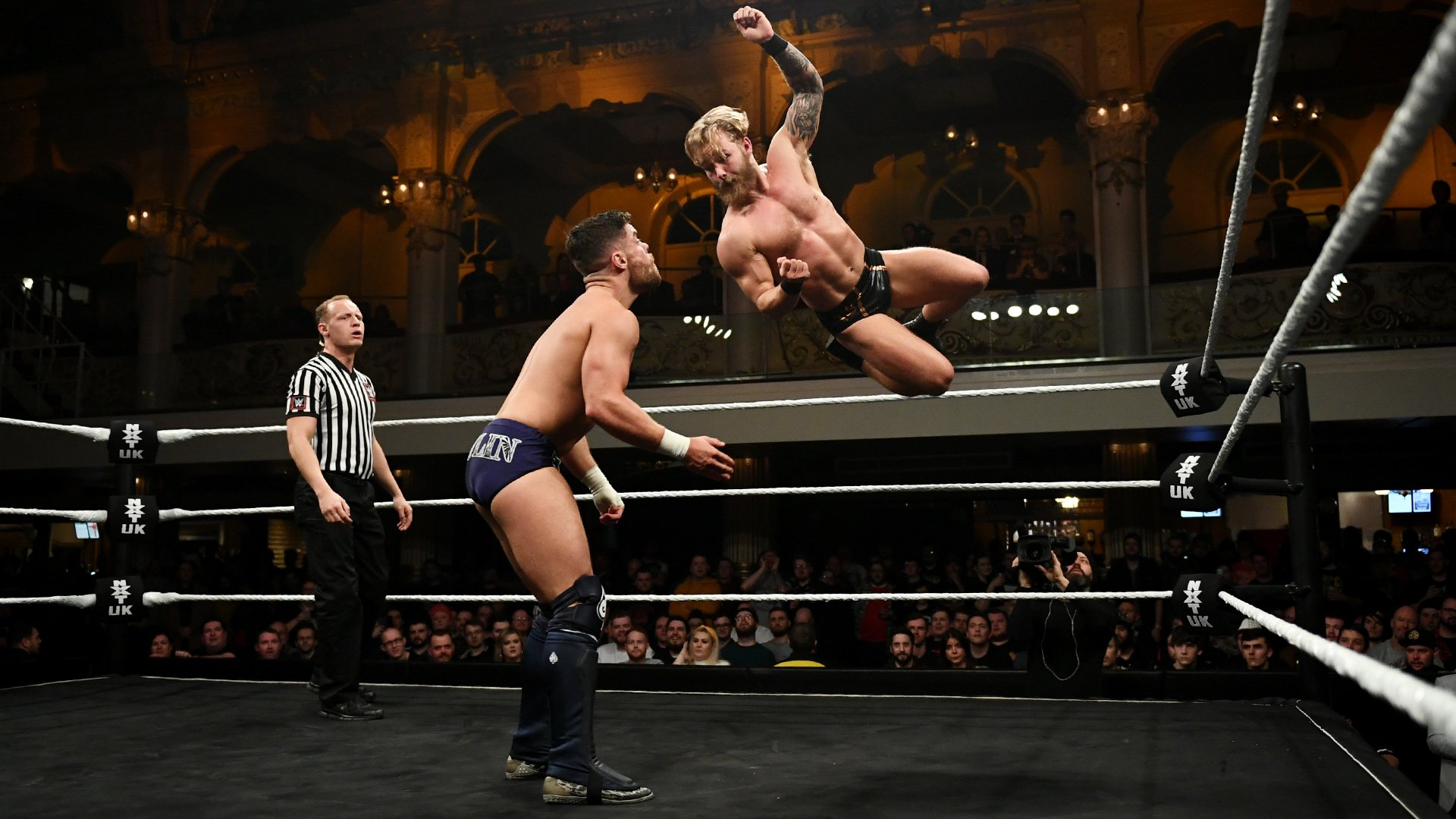 Jordan Devlin targeted Tyler Bate in his mission to prove he has been long overlooked in NXT UK. While Bate managed to win at TakeOver: Blackpool II, Devlin left no doubt about his abilities either.

All business from the get-go, Devlin’s trademark intensity appeared to be ramped up a notch higher than usual. Having made clear in recent weeks that he had a chip on his shoulder and Bate was the one to blame, The Irish Ace verbally berated his opponent early on while doling out punishment.

But Bate flipped on its head Devlin’s campaign to solidify himself as NXT UK’s ace when he spun Devlin on his shoulders for what seemed like an eternity before dropping him with a brainbuster.

The contest later turned into a test of wills. With both barely able to stand, the combatants exchanged a flurry of massive straight right hands in a sequence that ended with Textbook Tyler hitting the Bop & Bang after a Spanish fly from Devlin.

The Irish Ace had seemingly wrapped things up with another Spanish fly — this time from the top rope — followed by the Devlin Side, but Bate miraculously found a way to kick out.

Attempting to add insult to injury, with a Tyler Driver ’97 of his own, backfired on Devlin, who was hit with a huge springboard tornado DDT and Bate’s Tyler Driver. That wasn’t quick enough to put away the Irish Ace, but Bate’s twisted corkscrew clash moments later was, putting a bow on an instant classic that brought Blackpool to its feet.

Who emerged victorious from the all-out bedlam of the 4-Way Ladder Match? 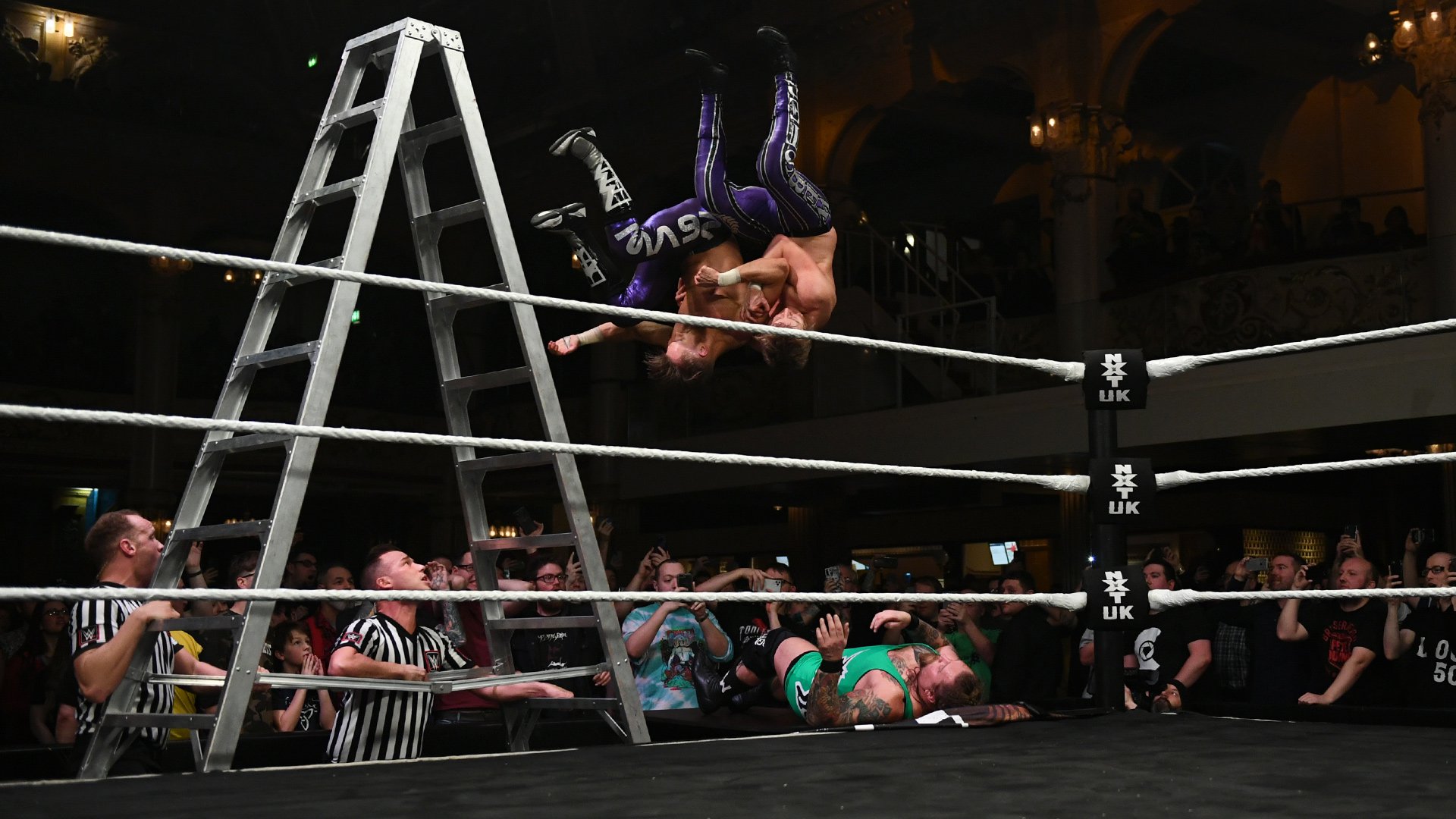 If one word was fitting for the first-ever Ladder Match in NXT UK history, it would be anarchy. But two words were even more important: “And still.”

Though Mark Coffey & Wolfgang stood tall with the gold in the end, no team avoided punishment — whether it was James Drake’s 450 splash off a ladder, Gallus repeatedly bashing Imperium’s Fabian Aichner & Marcel Barthel between a pair of ladders or Webster & Andrews delivering a double senton from atop a gigantic ladder onto Wolfgang through a table.

The violence reached yet another level when Andrews introduced a kendo stick, blasting James Drake & Zack Gibson with it repeatedly until it splintered.

Able to subdue Andrews from there, Imperium seemed primed for victory — that was until Wolfgang came out of nowhere to spear Aichner through a ladder. With his teammate no longer able to protect him, Gallus launched Barthel from the top of the ladder to the outside of the ring, clearing the way to grab the titles.

TakeOver: Blackpool II ends with a shock to the system after WALTER’s war with Joe Coffey for the WWE UK Title 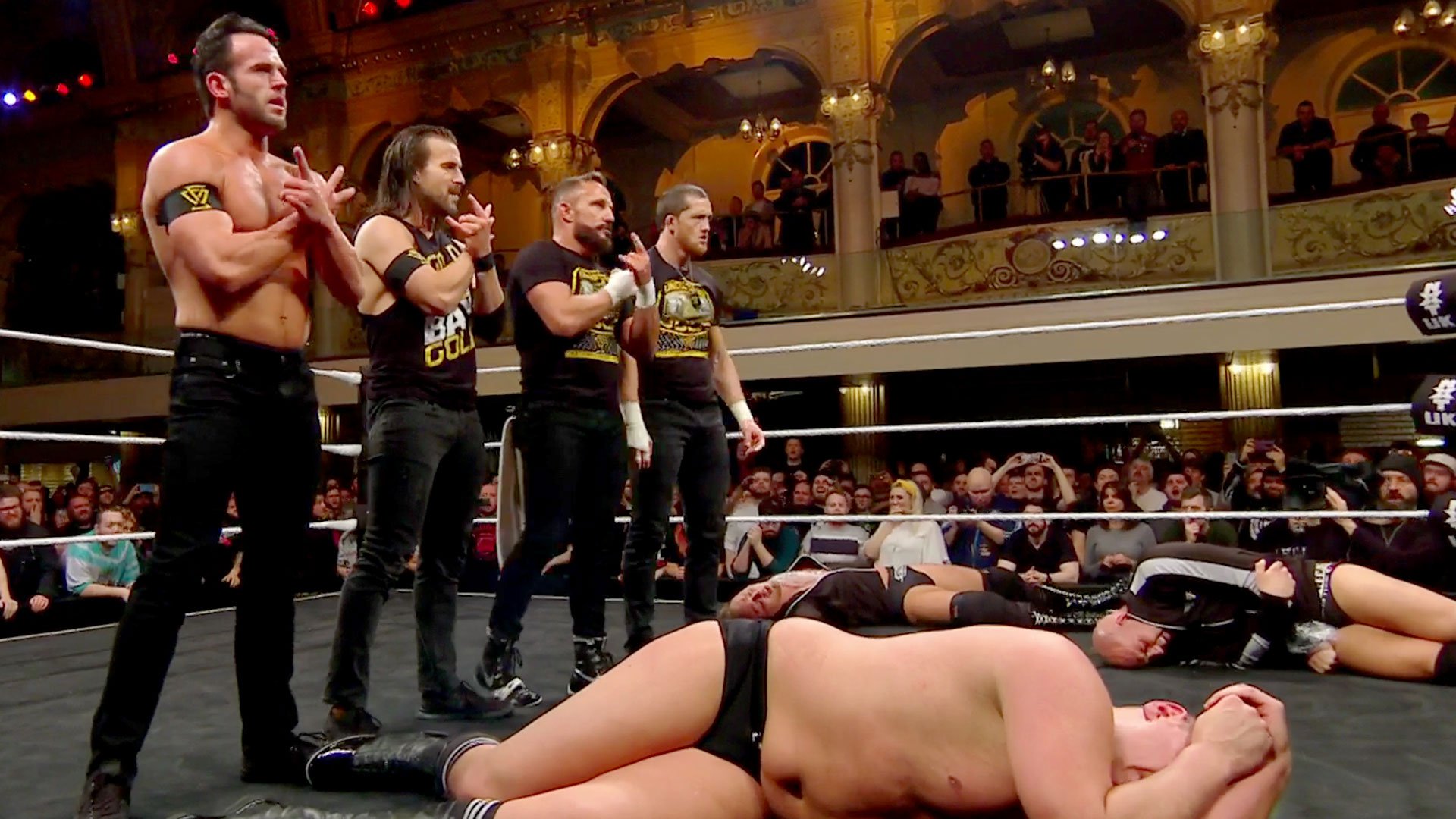 WALTER’s reign over NXT UK will continue, but he and Imperium now face a challenge for undisputed brand supremacy from NXT’s best.

The moment of triumph for The Ring General and his allies following WALTER’s grueling yet successful WWE United Kingdom Title defense against Joe Coffey didn’t last long. It was cut short by The Undisputed ERA, who shockingly took over The Empress Ballroom to lay waste to Imperium ahead of their Eight-Man Tag Team Match at WWE Worlds Collide in two weeks.

Moments earlier, we saw the dramatic conclusion to the war between the leaders of Imperium and Gallus that had become about so much more than simply the WWE UK Championship. It was about The Iron King having spent the past year feeling reduced to a self-described “afterthought” following WALTER’s arrival.

That bitterness fueled Coffey, who brought a strength WALTER has rarely run into during his dominant reign as champion. The Ring General also came prepared with his signature hard-hitting repertoire, however, blistering Coffey’s chest with ruthless slaps, chops and clubbing blows.

The Iron King also caught some bad luck, downing WALTER with a powerbomb late in the match — but the referee was nowhere in the ring to count the pin after being taken out with the defending champion’s errant dropkick moments earlier. That led to a chaotic sequence with Alexander Wolfe interfering on behalf of his Imperium comrade before being fought off by Ilja Dragunov.

Dragunov’s Torpedo Moscow sent Wolfe crashing into the left knee of Coffey, adding further to the immense damage he had already suffered. The Ring General finished Coffey off with a powerbomb before slapping on a modified sleeper hold that left the battered Iron King with little choice but to tap out.

The rest of Imperium joined WALTER in the ring to celebrate before being ambushed in lightning-quick fashion by The Undisputed ERA. Landing the formidable first blow before Worlds Collide, NXT Tag Team Champions Bobby Fish & Kyle O’Reilly took down WALTER with their patented high-low combination before NXT Champion Adam Cole blasted him with The Last Shot. Message sent and delivered.