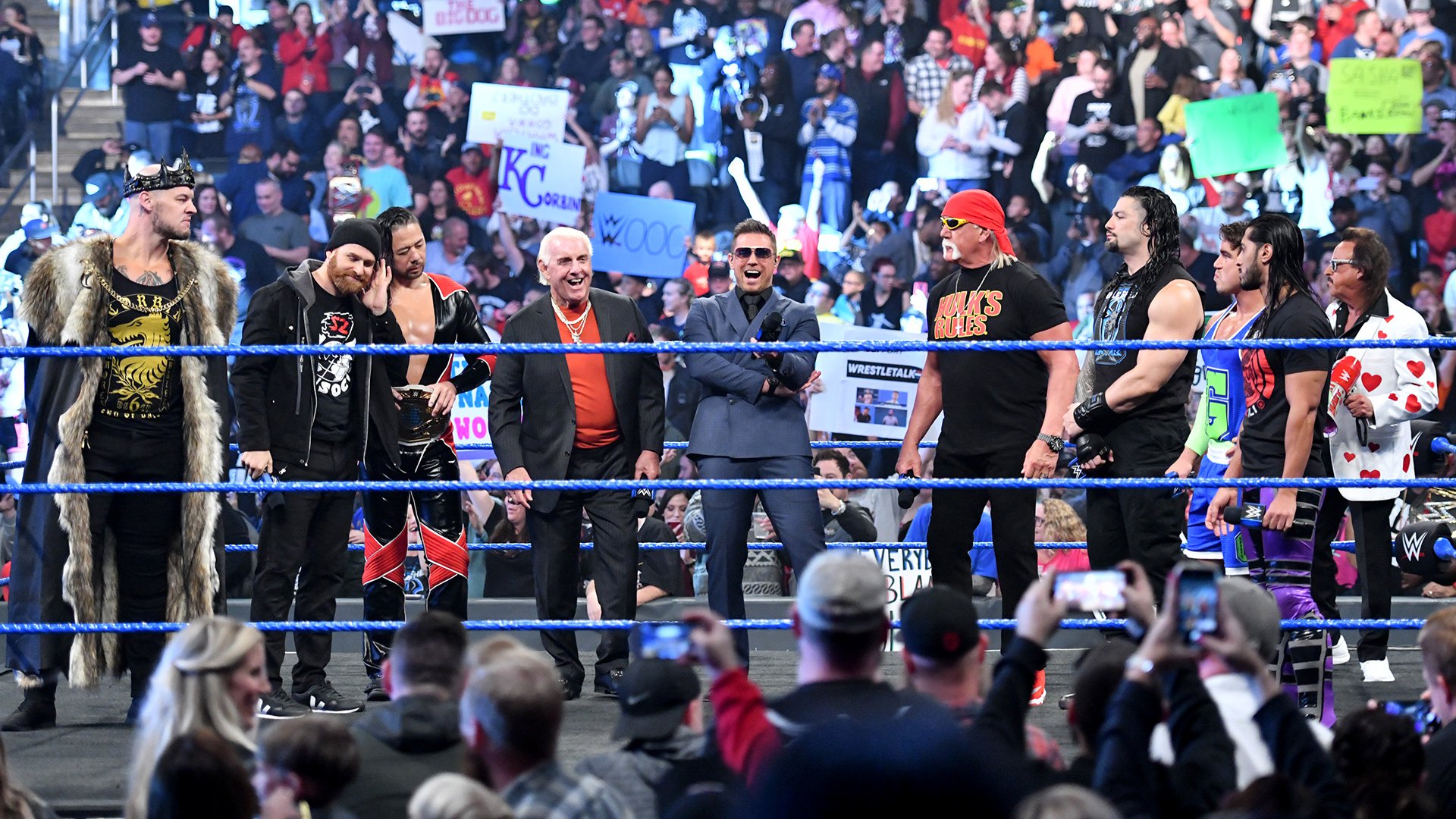 With the Team Hogan vs. Team Flair clash at WWE Crown Jewel next Thursday rapidly approaching, both Hulk Hogan and Ric Flair guested on “Miz TV” tonight with several team members each in tow.

Hogan and Flair were each revved up from the jump, with both supremely confident in their respective team’s chances at WWE Crown Jewel. The Superstars engaged in some pre-match smack talk with insults flinging back and forth between the likes of Roman Reigns and King Corbin. Matters escalated quickly though, with Team Hogan members Reigns, Shorty G & Ali ready to punch Intercontinental Champion Shinsuke Nakamura, Sami Zayn and King Corbin in the face. Zayn would first have Nakamura and Corbin refrain from such activity in the main event tonight, but then after some goading from The Hulkster, Zayn would agree to a Six-Man Tag Team Match, only with him not involved due to a supposed neck injury. However, Sami would have a replacement, a man itching for an opportunity on the blue brand: Cesaro.

The Swiss Superman’s arrival prompted a massive brawl between the two sides, with a massive melee going down that saw the Team Hogan representatives stand tall leading into the massive main event matchup. 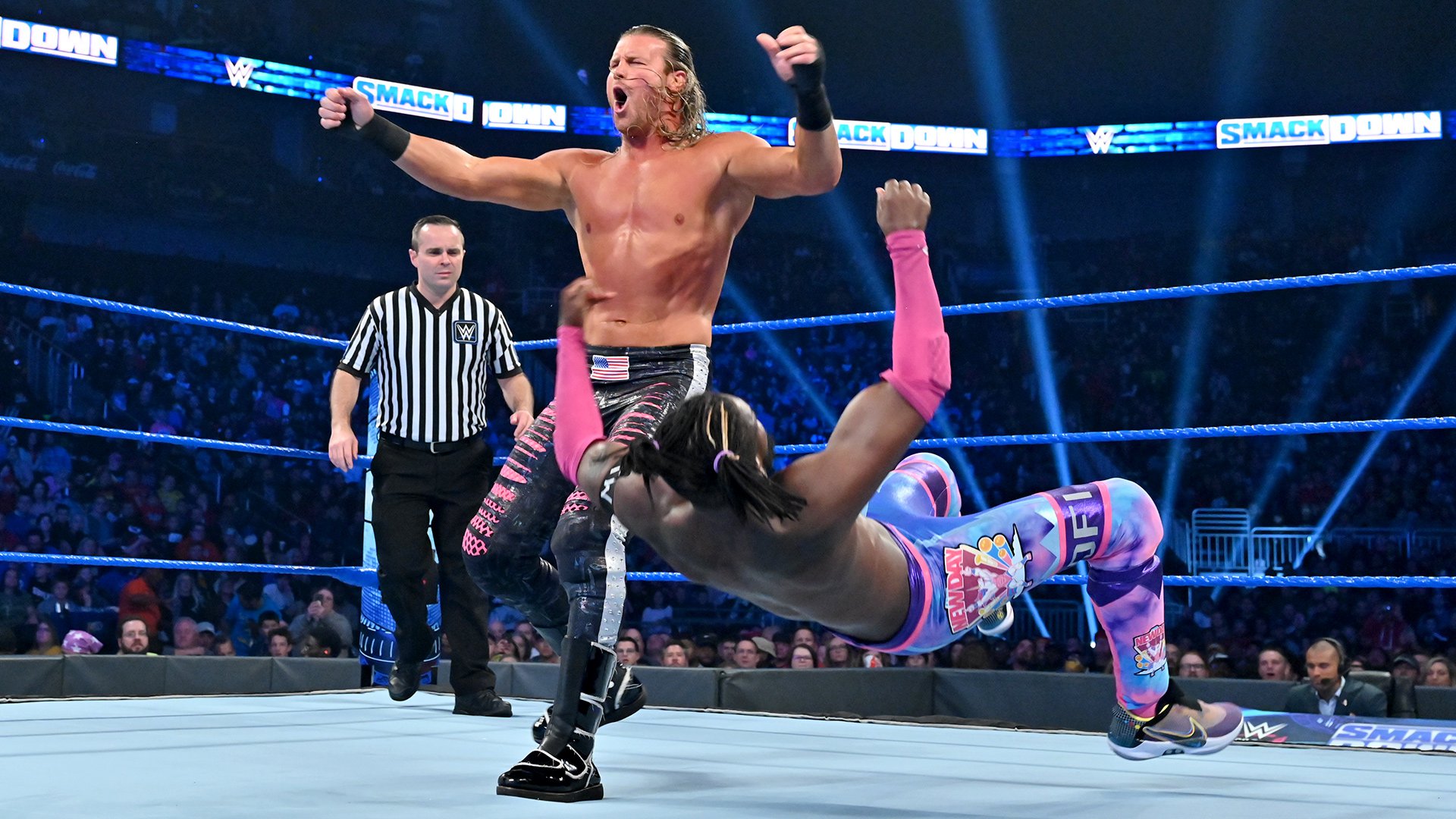 Following Xavier Woods’ devastating Achilles injury, Kofi Kingston & Big E attempted to right the ship ahead of the largest Tag Team Turmoil Match in WWE history by taking on a squad that will oppose them in that contest at WWE Crown Jewel, Dolph Ziggler & Robert Roode.

The four former Tag Team Champions went at it with intensity as each team tried to score a big win ahead of WWE Crown Jewel. In the critical moments, Kingston & Big E would appear to be rolling, but Ziggler would catch Kofi off-guard from behind, rolling him up by surprise and getting the W.

However, a preview of Tag Team Turmoil at WWE Crown Jewel would then spontaneously happen when SmackDown Tag Team Champions The Revival and Heavy Machinery darted out, and Kofi, Big E, Otis & Tucker cleared the ring to stand tall as a foursome… but it will be every team for themselves in Saudi Arabia. 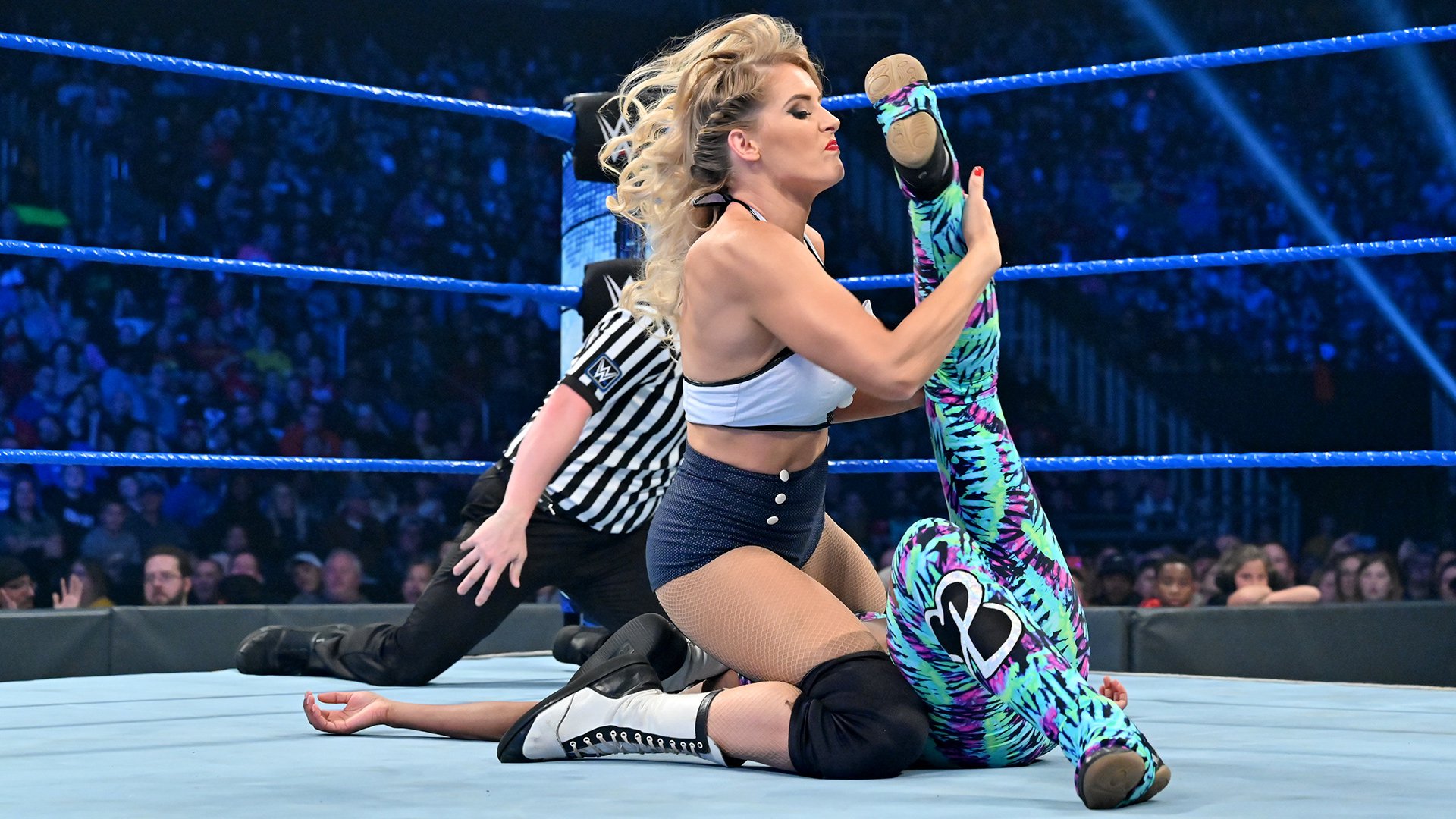 Disgusted with the notion of having to compete against a local “nasty,” Lacey Evans first disparaged her scheduled opponent’s very existence before seemingly walking out on the match before it could even begin. However, the local Kansas City competitor got a little too excited while dreaming about what a win over Evans could do for her career, counting along with the referee until The Sassy Southern Belle returned to the ring and dropped her flush with a Woman’s Right for an automatic and classy victory. 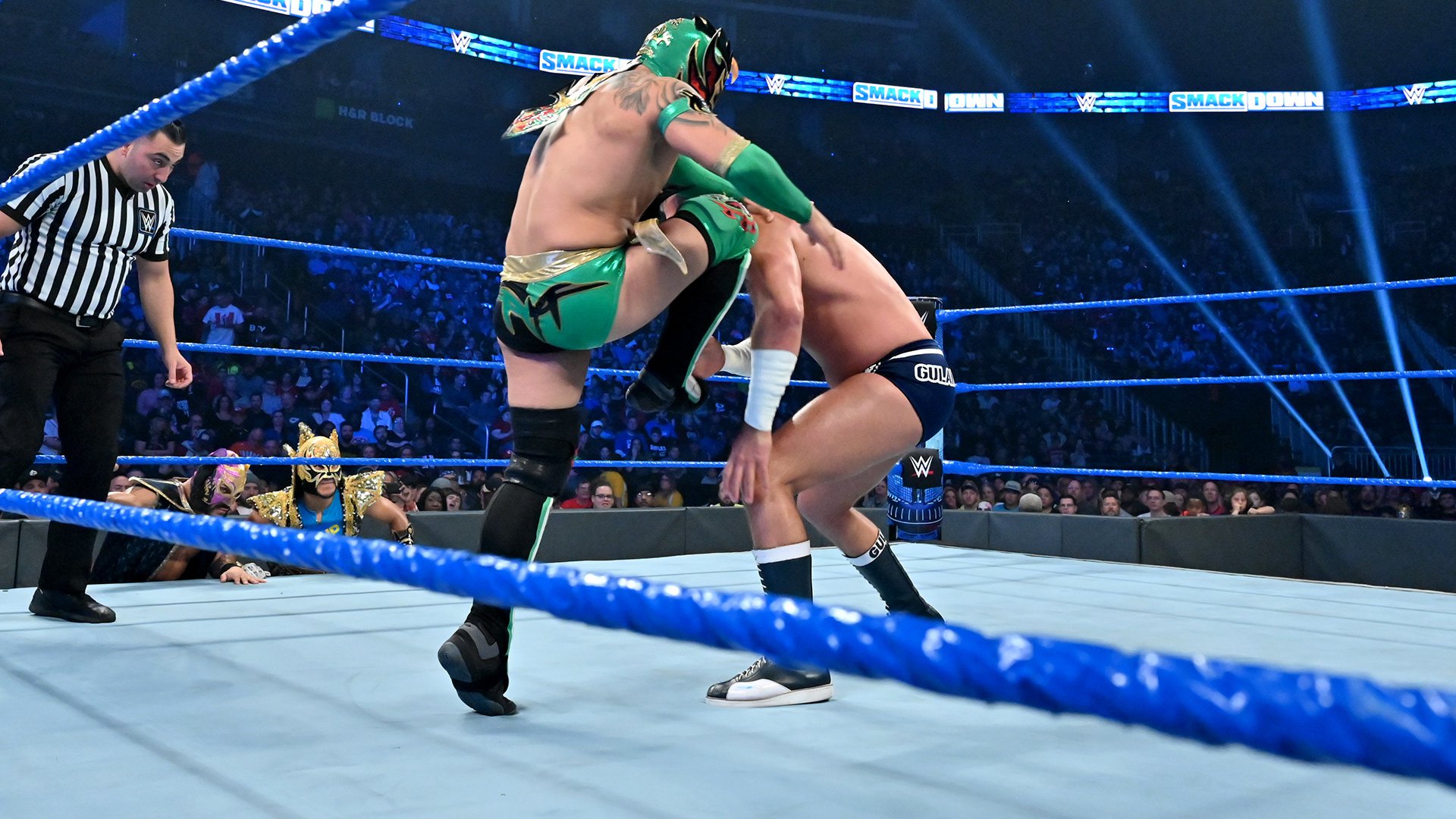 Gulak prodded the bear (or Monster Among Men as it is) before the contest, showing off some slides of a PowerPoint presentation that detailed why he believed Strowman would lose to Tyson Fury at WWE Crown Jewel before have the fight brought to him by his scheduled opponent, Kalisto. Gulak attempted to wear down The Lucha House Party member, but the mood changed when Strowman arrived, distracting Gulak and allowing Kalisto to capitalize with a Salida Del Sol for the victory.

From there, Gulak was all but done for. The former Cruiserweight Champion was annihilated by Braun for the second straight week with two Running Powerslams, and The Monster Among Men followed up the beatdown by vamping on the microphone, declaring that this is what he does to people who disrespect him. He stated that that Fury does not belong in WWE and made a promise for what would happen to The Gypsy King WWE Crown Jewel. Yup, Fury would Get. These. Hands. 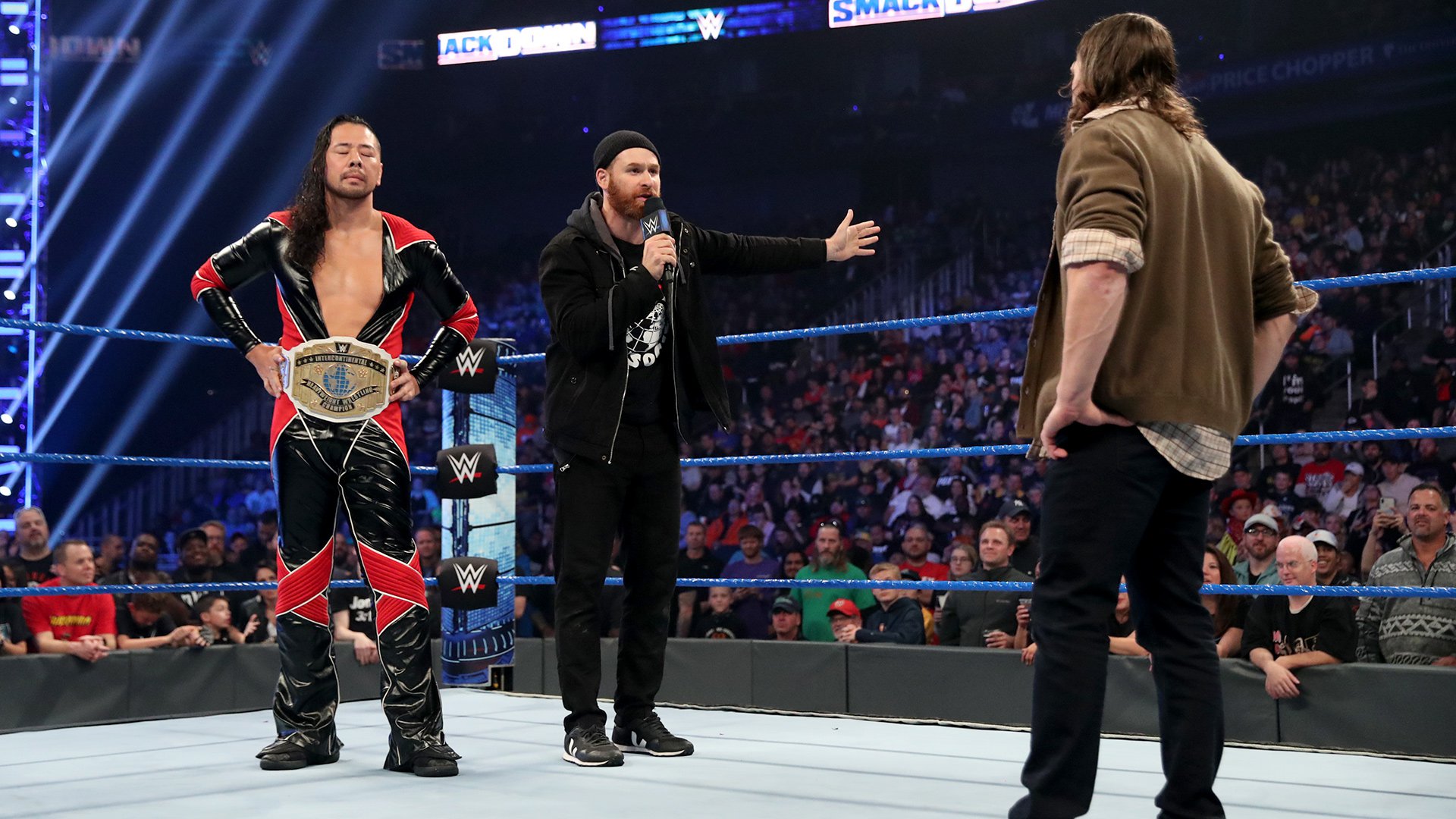 Daniel Bryan joined Michael Cole in the ring for a hard-hitting interview centering around one central topic: Was “Yes!” about to be back?

However, before Bryan could respond, he was interrupted by Zayn, who would throw comments Bryan made last November about the “Yes!” Movement being dead in his face and suggest that “The New” Daniel Bryan was the real Daniel Bryan. Sami would go on to say that Bryan has nothing in common with the WWE Universe, but that he actually has a ton in common with both Zayn & Nakamura and that all three are true artists inside the ropes. Zayn would then encourage Bryan to join both him and WWE’s Rockstar so that the three could go on to conquer Friday Night SmackDown.

The WWE Universe was clearly against Zayn’s proposal for Daniel, but Bryan seemed conflicted about what to do. Sami extended a hand, and Bryan thought about it for a moment before walking away. 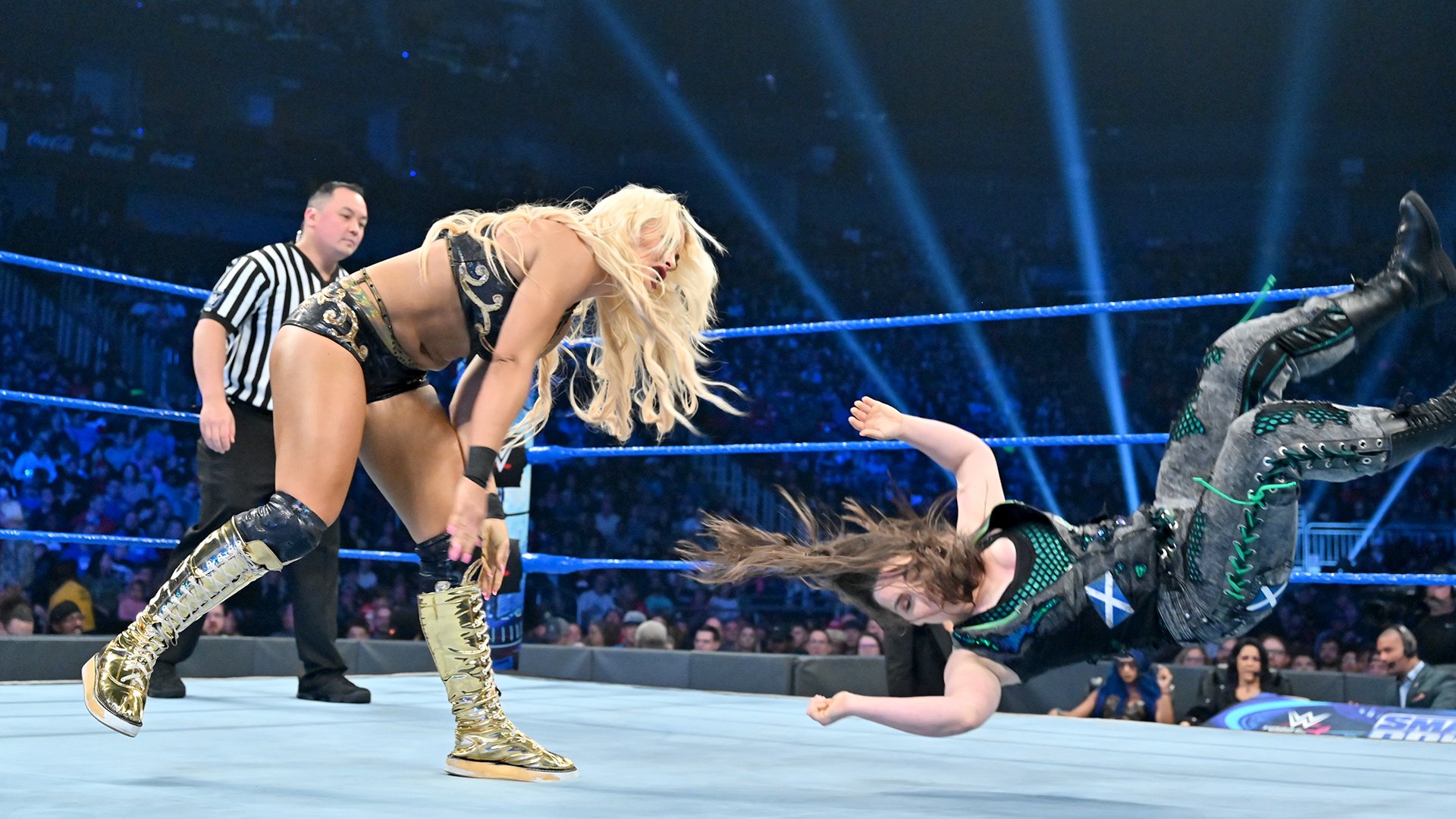 Cross had to deal with meddlesome Sonya Deville and also keep her eyes on SmackDown Women’s Champion Bayley and Sasha Banks, who were deriding her from the commentary table. Cross smashed through all the obstacles, defeating Rose with a ring-rattling Swinging Neckbreaker and making a major statement to Bayley. 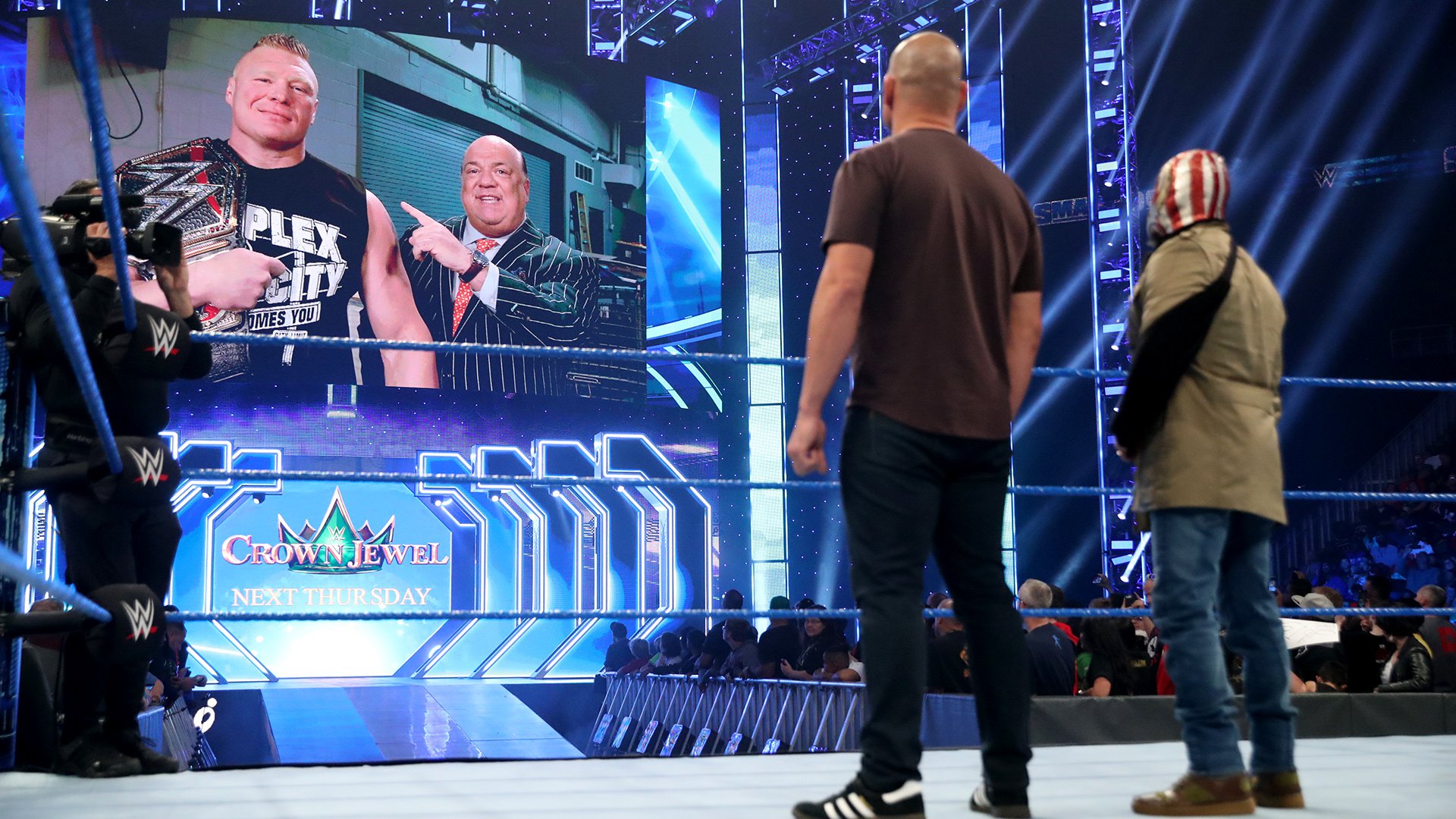 With Cain Velasquez by his side, Rey Mysterio lamented the attack that WWE Champion Brock Lesnar brought on to both him and his son Dominik several weeks ago. Mysterio then confidently proclaimed that Velasquez was going to bring the fight to Lesnar at WWE Crown Jewel and put a scar on the other side of The Beast’s face. Both Rey and Cain were then ready for the scheduled face to face between Velasquez and Lesnar, but The Anomaly & Paul Heyman had other ideas.

The two would instead appear on the TitanTron, saying that they had “other things to do” rather than go face to face tonight. Those “other things?”

Lesnar & Heyman would reveal a severely beaten Dominik laying in a heap, prompting Mysterio & Velasquez to dart out of the ring and toward Mysterio’s son. The two would get Dominik to WWE medical personnel as soon as possible, but that wouldn’t be the end of Lesnar’s assault. The Beast would soon storm in and absolutely pulverize Mysterio, Velasquez and Dominik with an all-out assault that would see Brock pelt Rey onto a wall and F-5 Cain right onto the already struggling Dominik before leaving all three laying very, very worse for wear. 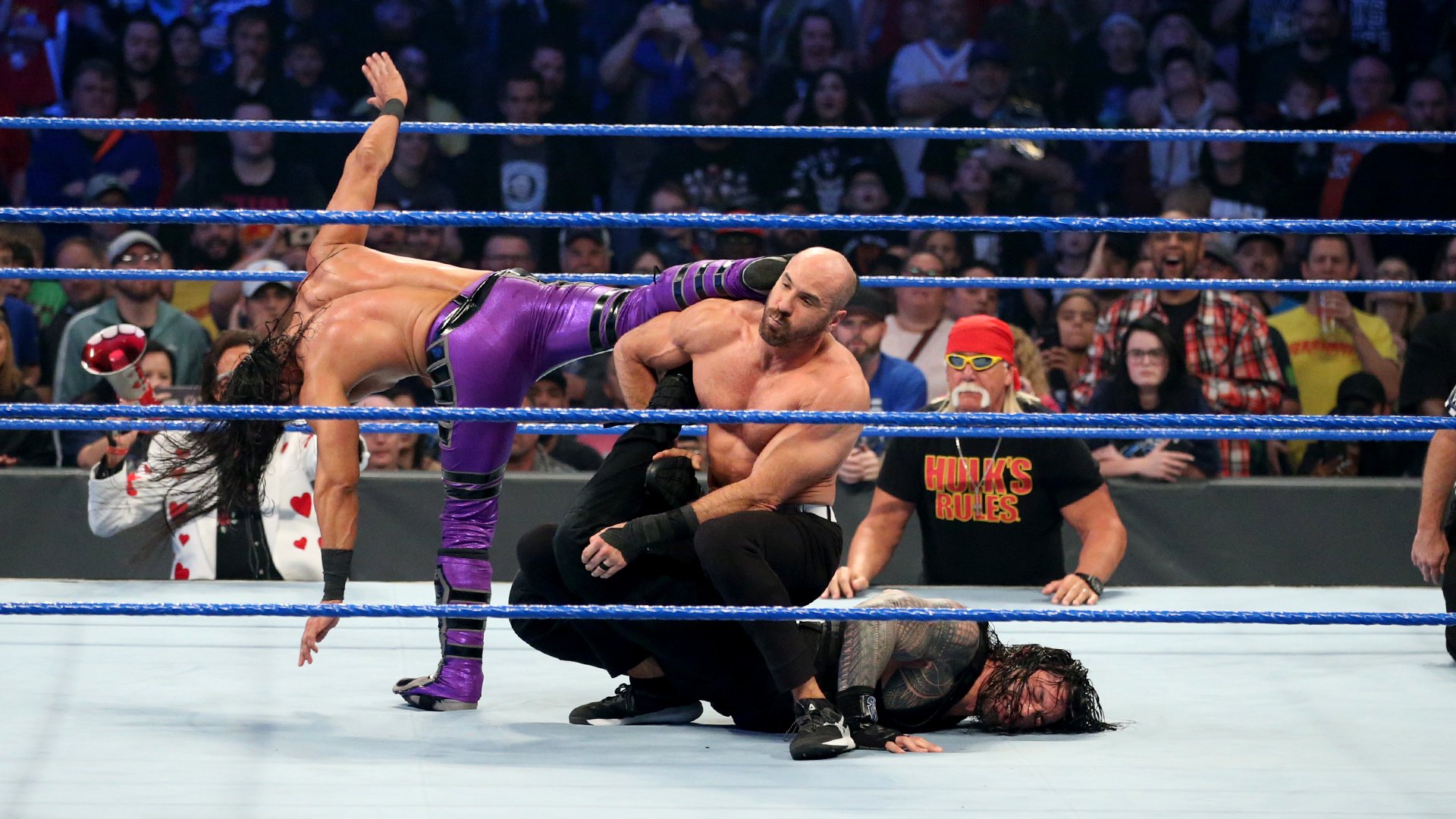 After the tense exchange between Team Hogan and Team Flair on “Miz TV” earlier in the evening, Roman Reigns, Ali & Shorty G took on Intercontinental Champion Shinsuke Nakamura, King Corbin and Cesaro with Hulk Hogan and Ric Flair in their respective corners.

The two sides went at it with intensity with WWE Crown Jewel now very much in sight. Both teams would appear to close in on victory several times, but in the critical moments, The Big Dog started to roll, connecting with a massive Spear onto Cesaro before tagging in Ali to finish off The Swiss Superman with a dazzling 450 Splash for a major win ahead of WWE Crown Jewel.