Adam Cole defended the NXT Championship against Daniel Bryan in an instant classic to conclude a night of surprises as the black-and-gold brand claimed a resounding victory over SmackDown in the first battle on the march toward Survivor Series. 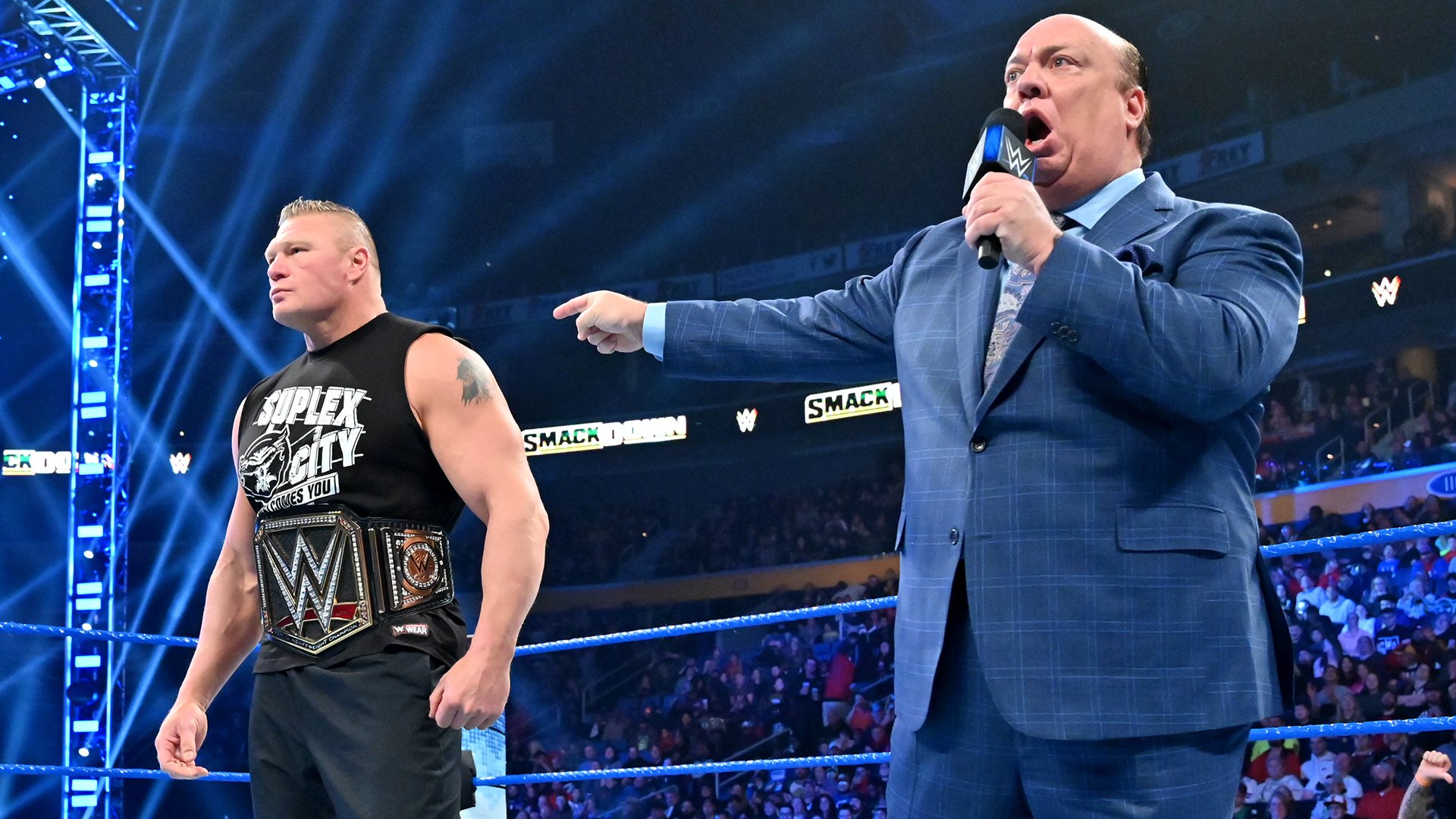 WWE Champion Brock Lesnar conquered a ghost from his past in defeating Cain Velasquez at WWE Crown Jewel, but he already has his sights set on his next target — and he’s apparently willing to leave SmackDown to pursue it.

Lesnar and Paul Heyman kicked off SmackDown to celebrate The Beast’s successful title defense the night before at Crown Jewel. They had much more than that in store for the WWE Universe, however.

Heyman addressed the victory and turned his attention to Mysterio, who enraged Lesnar by fighting him off with a steel chair when The Beast refused to relinquish his Kimura Lock after using it to make Velasquez tap out.

Explaining that WWE Chairman Mr. McMahon said he couldn’t comply with Heyman and Lesnar’s demand to face Mysterio due to Raw and SmackDown contract exclusivity, Lesnar’s advocate announced a different plan: The Beast was quitting SmackDown immediately and heading to Raw to “hunt” The Ultimate Underdog.

And just like that, Heyman and Lesnar had rocked WWE to its very core. 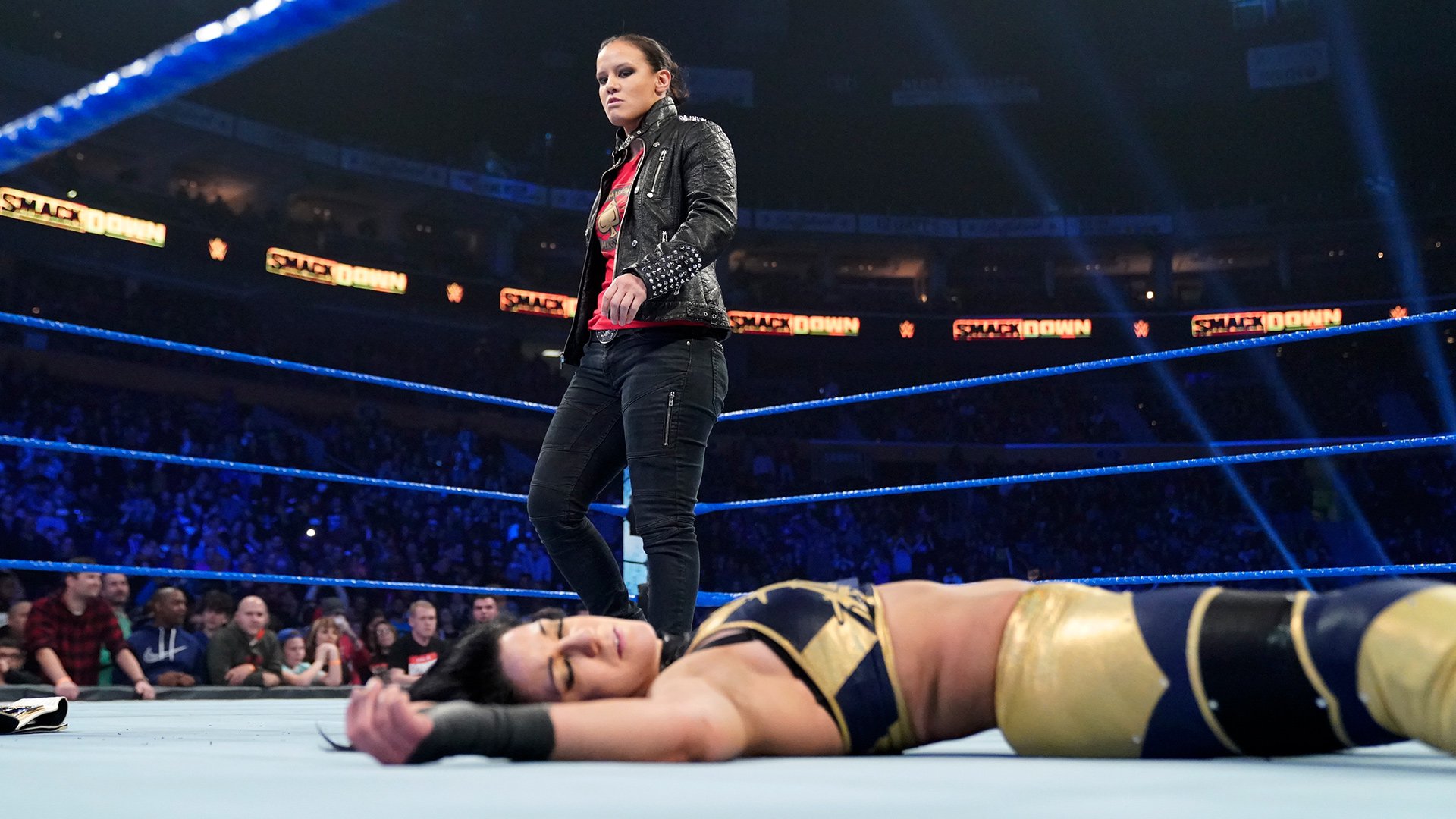 Bayley was more than up to the challenge of Nikki Cross, but she wasn’t ready for the wrath of Shayna Baszler.

The SmackDown Women’s Champion overcame a valiant effort by Cross to retain her title — with thanks due to close ally Sasha Banks.

Cross nearly scored the upset victory with several near-falls, seemingly overwhelming Bayley with her initial aggression. WWE’s Twisted Sister had been on a roll in recent weeks with multiple victories, including one in a Six-Pack Challenge two weeks earlier to earn this very title opportunity. The numbers game proved too much for Cross, though, with Banks interfering a second time at ringside to allow Bayley to hit an innovate twisting facebuster for the pinfall victory.

​​​Bayley didn’t have long to bask in the glow of her win, however, finding herself ambushed by Baszler immediately after the NXT Women’s Champion took down Banks.

After overpowering Bayley with a gut-wrench dominator and dropping her with a vicious kick, The Queen of Spades made her exit, leaving wreckage in her wake. 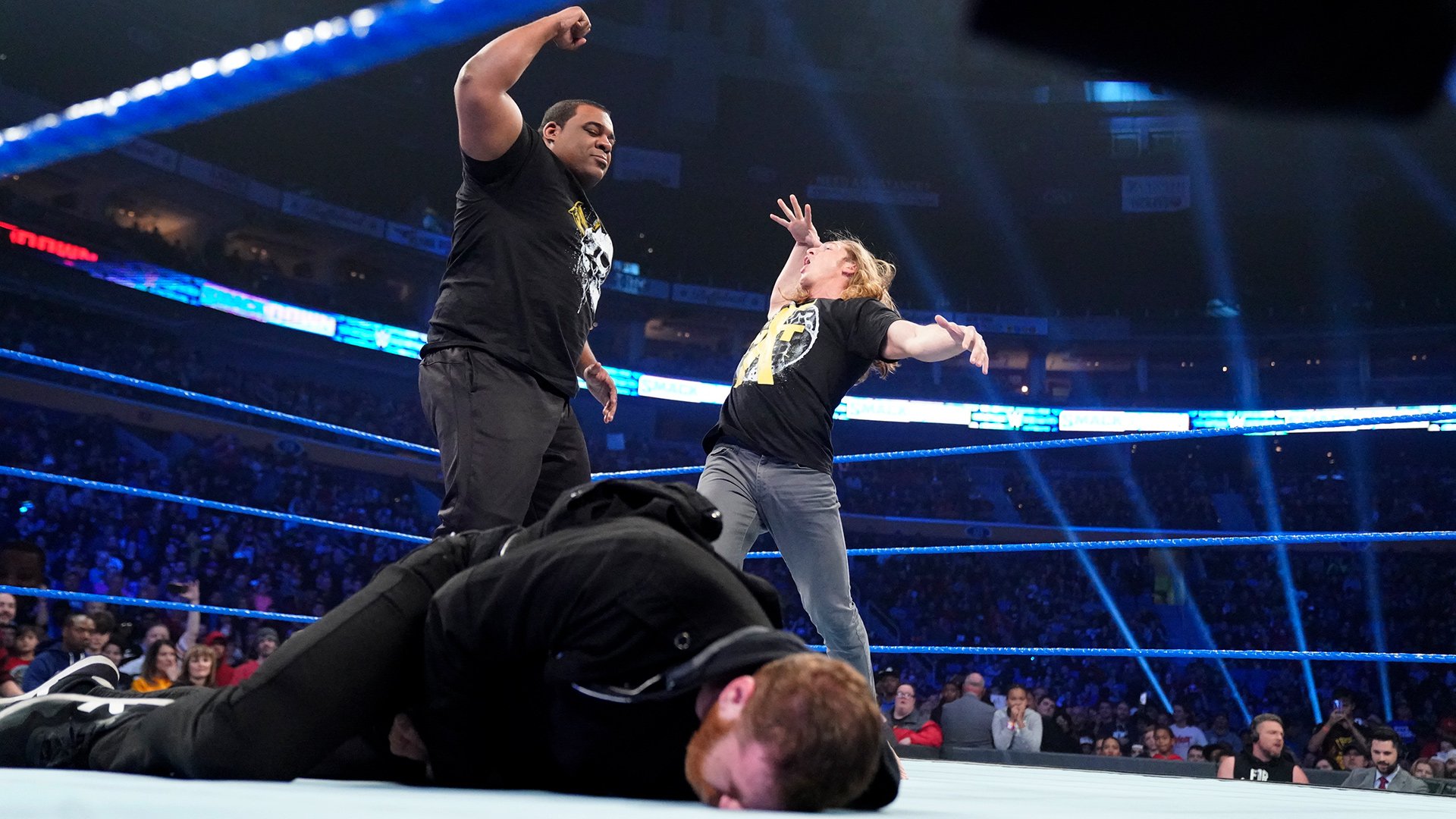 Sami Zayn appeared focused on getting to the bottom of what he seemed to suggest was a conspiracy involving NXT Superstars, hatched from the brain of the man behind the black-and-gold brand, Triple H.

All he found were not-so-friendly introductions from two of NXT’s top Superstars in Keith Lee and Matt Riddle.

Sensing danger immediately after running into both Superstars backstage, The Critic of the Critics immediately tried to make peace. When diplomacy failed him, Zayn made a run for it, but his route brought him to ringside where Riddle chased him down like a lion in pursuit of a gazelle.

Forcing Zayn into the squared circle where he was without escape, The Original Bro connected on a crisp ripcord knee strike before dropping Zayn with the Bro Derek. The moment was punctuated by the 320-pound Lee flattening him with a breathtaking moonsault.

Zayn may have not found any clear answers, but one thing was clear: NXT had made a resounding statement, courtesy of Lee and Riddle. 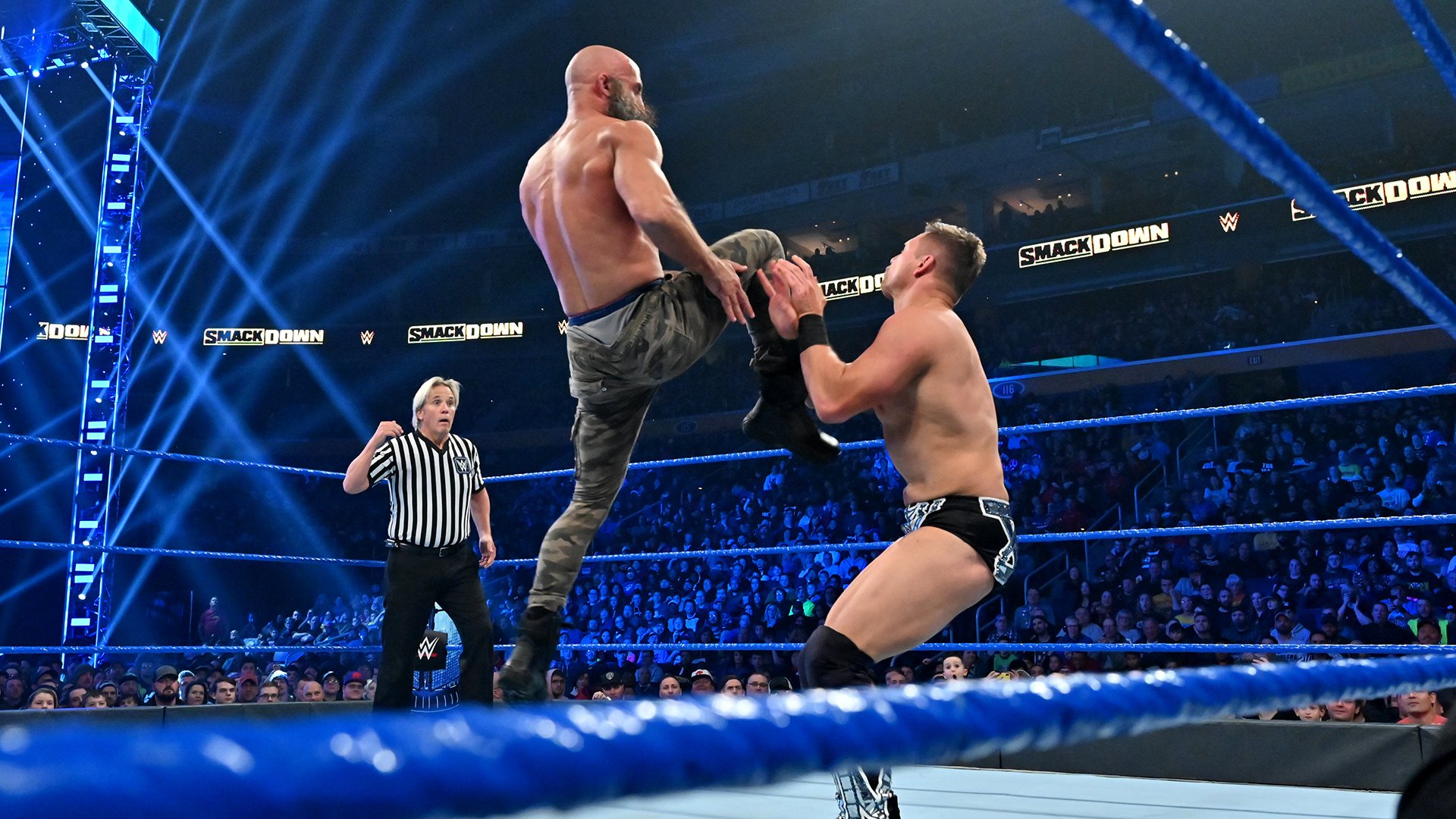 Not only did The Miz find himself with surprise company on “Miz TV,” he also found himself on the short end of an impromptu matchup with The Blackheart of NXT.

“Miz TV” was originally set to play host to new Universal Champion “The Fiend” Bray Wyatt, but with Wyatt being one of many Superstars unable to make it to SmackDown after mechanical issues kept them grounded following WWE Crown Jewel, The Miz was without a guest — but not for long. The A-List Superstar soon shared the ring with Tommaso Ciampa, who returned to NXT last month after recovering from a devastating neck injury.

And just as he proved more than capable of going toe-to-toe with The Miz in a war of words, the self-proclaimed Greatest Sports Entertainer of All Time was also ready for The Awesome One inside the ring.

The two engaged in a back-and-forth duel before Ciampa caught The Miz off the top rope with a blistering knee to the face. That opened the window for Ciampa to hit the Fairytale Ending and score a victory on behalf of NXT. 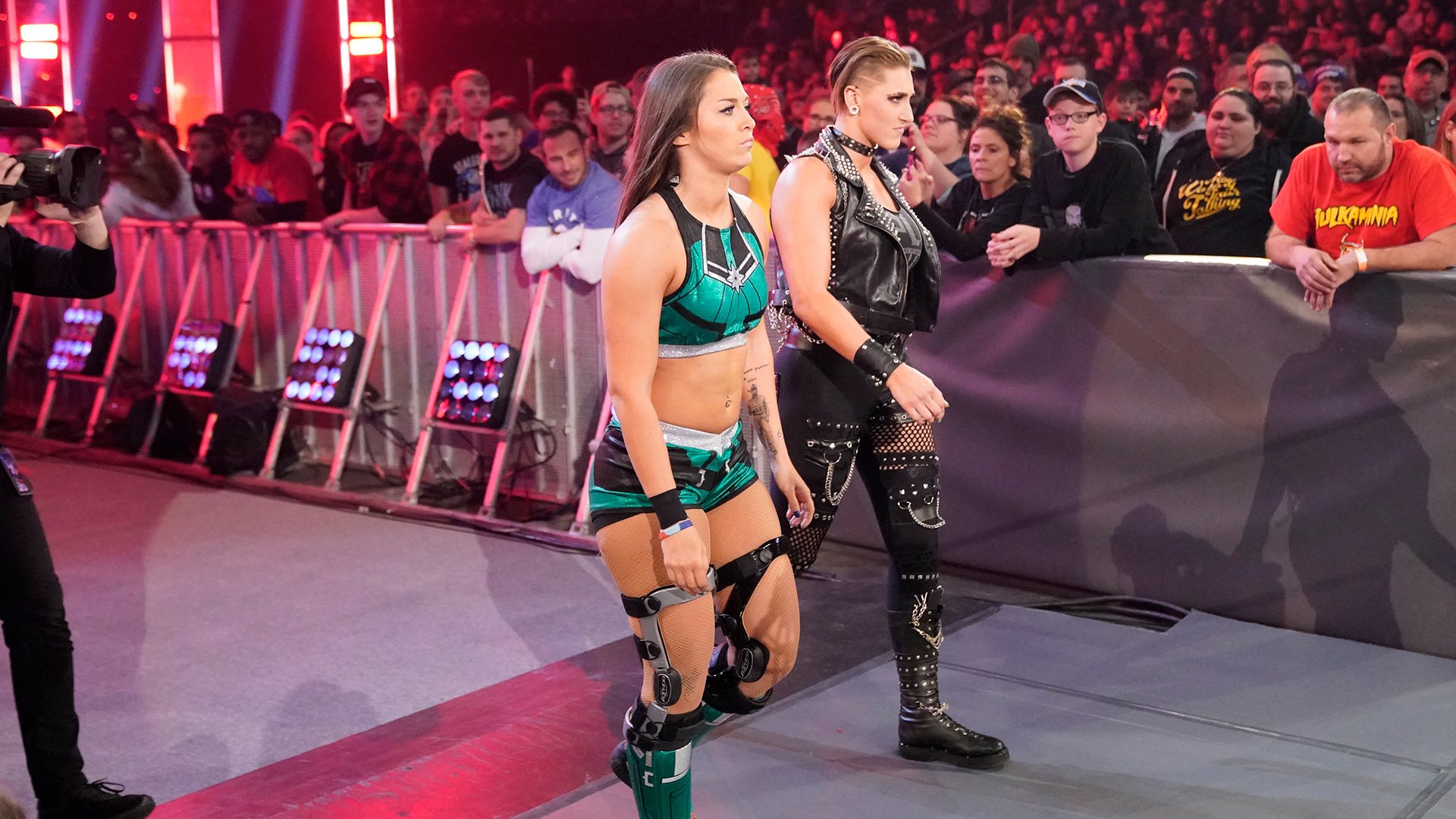 With SmackDown already under siege by NXT, the hits kept coming for the blue brand when the night shifted to women’s tag team competition.

This time, Rhea Ripley & Tegan Nox took out Fire and Desire in an impromptu challenge.

Mandy Rose & Sonya Deville expected a matchup with Carmella & Dana Brooke, but the camera cut backstage to find NXT’s Bianca Belair demolishing their scheduled opponents, ending her assault by launching The Princess of Staten Island over a set of crates in savage fashion.

That prompted Ripley & Nox to arrive and insert themselves in the match. Seemingly catching the confused and stunned Fire & Desire off-guard, Nox dispatched of Deville by tossing her into the announce team before flooring Mandy with the Shiniest Wizard. The Golden Goddess had little choice but to tap to Ripley’s expertly applied inverted Texas Cloverleaf. 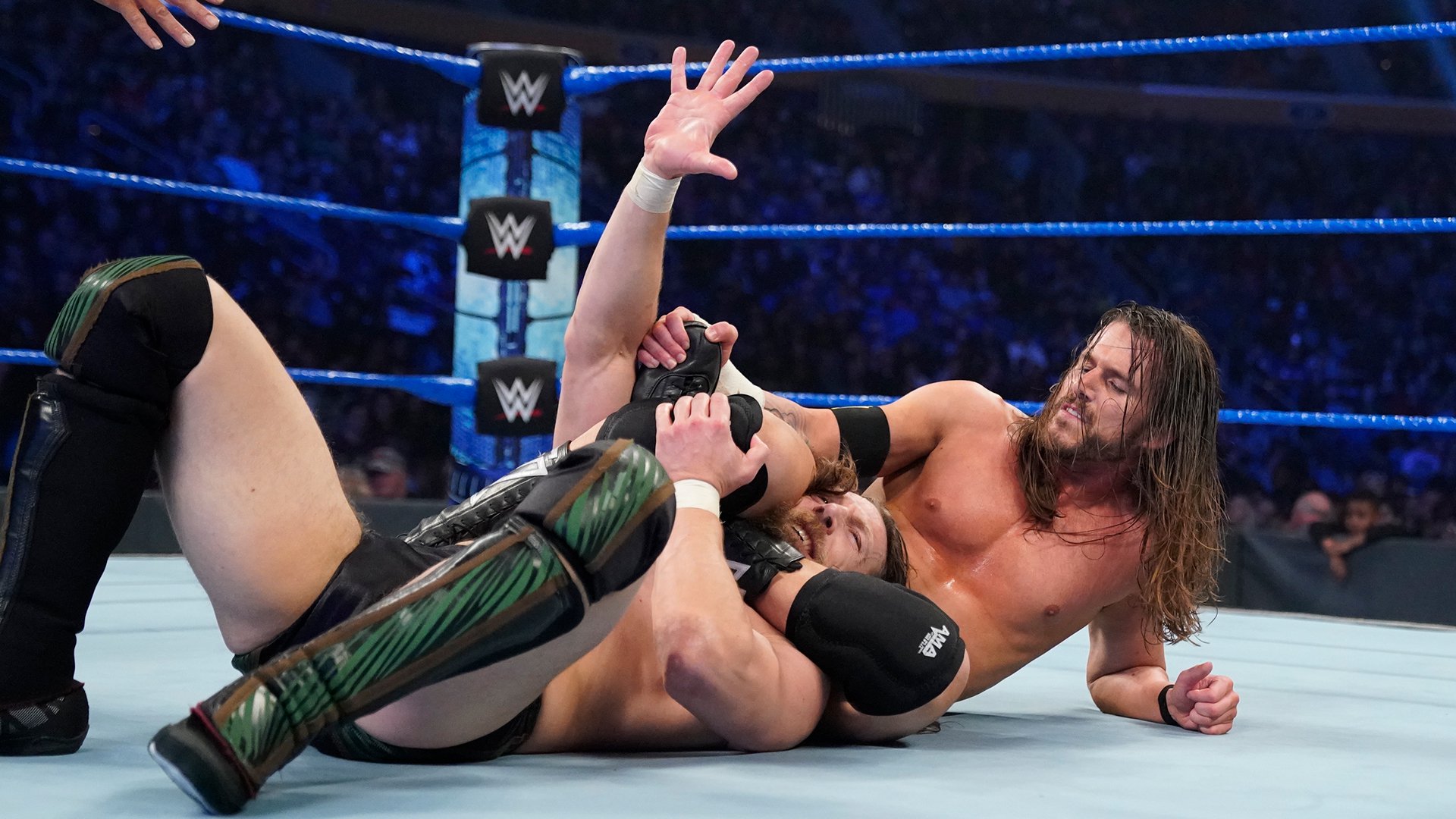 The first battle in the march toward Survivor Series is in the books, and Adam Cole made sure that NXT won in emphatic fashion.

Earlier in the evening, Daniel Bryan made it clear he had seen enough of NXT’s surprises, finding Triple H and WWE Hall of Famer and NXT Trainer Shawn Michaels backstage and demanding answers — and a fight. While the mastermind of NXT was not long for competition on this night, he introduced Bryan to someone who was — NXT Champion Adam Cole.

Bryan accepted on the condition that Cole put his title on the line, and with that, the WWE Universe was treated to an instant classic.

It was no shock that the first-ever meeting between two of WWE’s most technically sound competitors amounted to a squared-circle education. Even with a fractured wrist sustained in recent competition on NXT, Cole went blow-for-blow and then some with Bryan in the impromptu dream match.

Though Bryan is widely regarded as perhaps the finest tactician in all of sports-entertainment, the NXT Champion repeatedly showcased his impressive mat acumen en route to victory. A fiery back-and-forth sequence of strikes eventually gave way to Cole connecting with a superkick straight out of Michaels’ playbook before hitting the Panama Sunrise and the Last Shot for the win.

Cole was soon mobbed by his fellow NXT Superstars, many of whom had already made their presence felt throughout the night at the expense of the SmackDown roster.

Triple H joined the fray and threw down the gauntlet not only for SmackDown, but also for Raw, declaring “This is our army, this is our fight, this is our ring.

“At Survivor Series, know what you’re getting into. Raw and SmackDown, let’s see what you got.”