The Miz & John Morrison briefly thought they had taken out both sets of their potential WrestleMania challengers, but they were in for a rude awakening when WWE officials revealed that they will now defend their SmackDown Tag Team Titles in a Ladder Match against both The New Day and The Usos at The Show of Shows.

Tamina made a massive statement ahead of WrestleMania 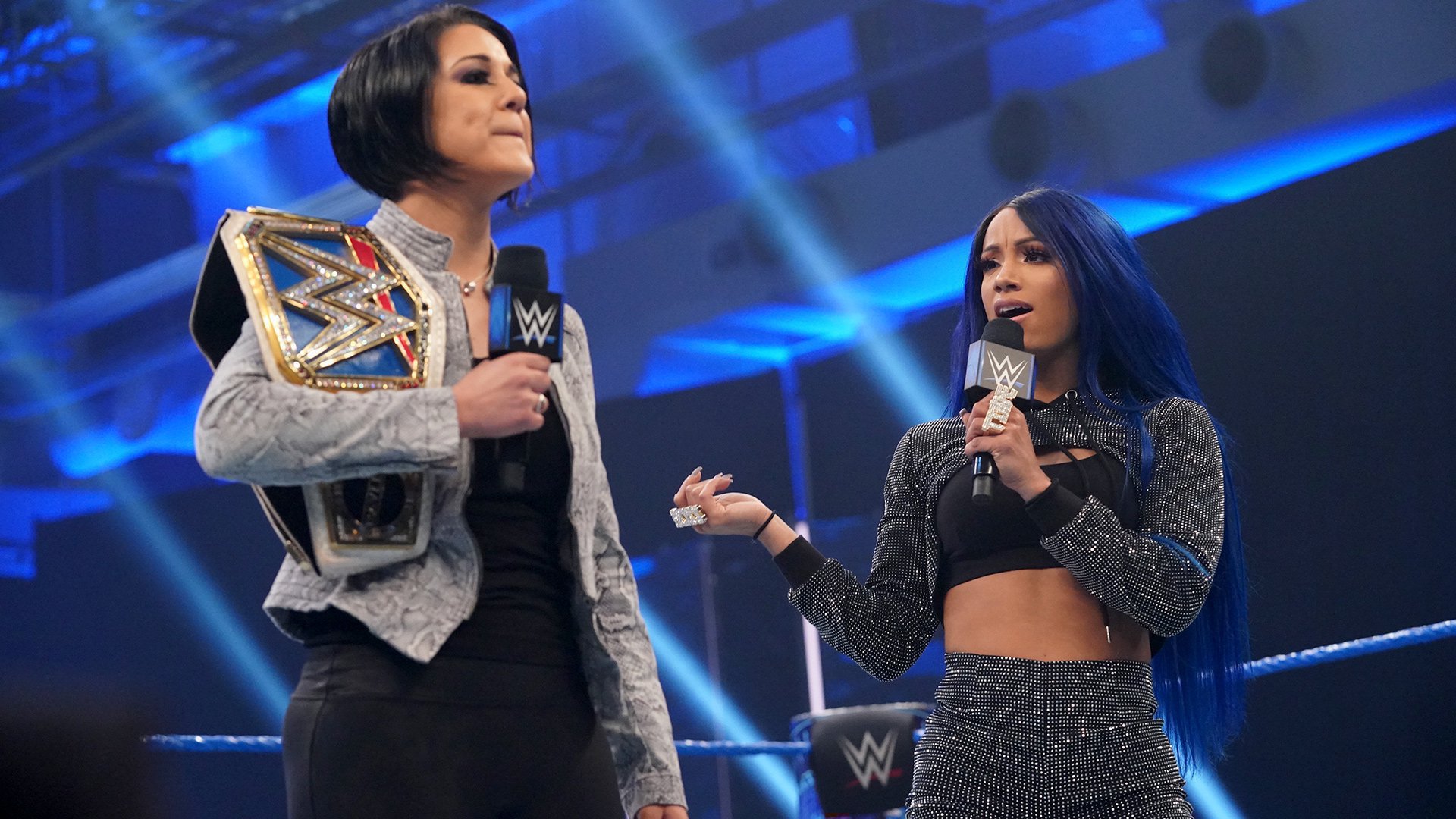 SmackDown Women’s Champion Bayley and Sasha Banks were still irate about the Fatal 5-Way Elimination Match for Bayley’s title at WrestleMania 36, which will force Bayley to defend the title against four other Superstars and pit her against Banks.

The two self-proclaimed role models claimed their friendship was unbreakable, but they were interrupted by their opposition at The Show of Shows – Lacey Evans, Naomi and Tamina. Whereas Evans and Naomi came to trade barbs with Bayley & Banks, Tamina came to fight, and she decimated The Sassy Southern Belle and The Glow, leading Bayley & Banks get some additional licks in on Naomi. But Tamina them shot a menacing look to the pair, prompting the best friends to exit quickly. 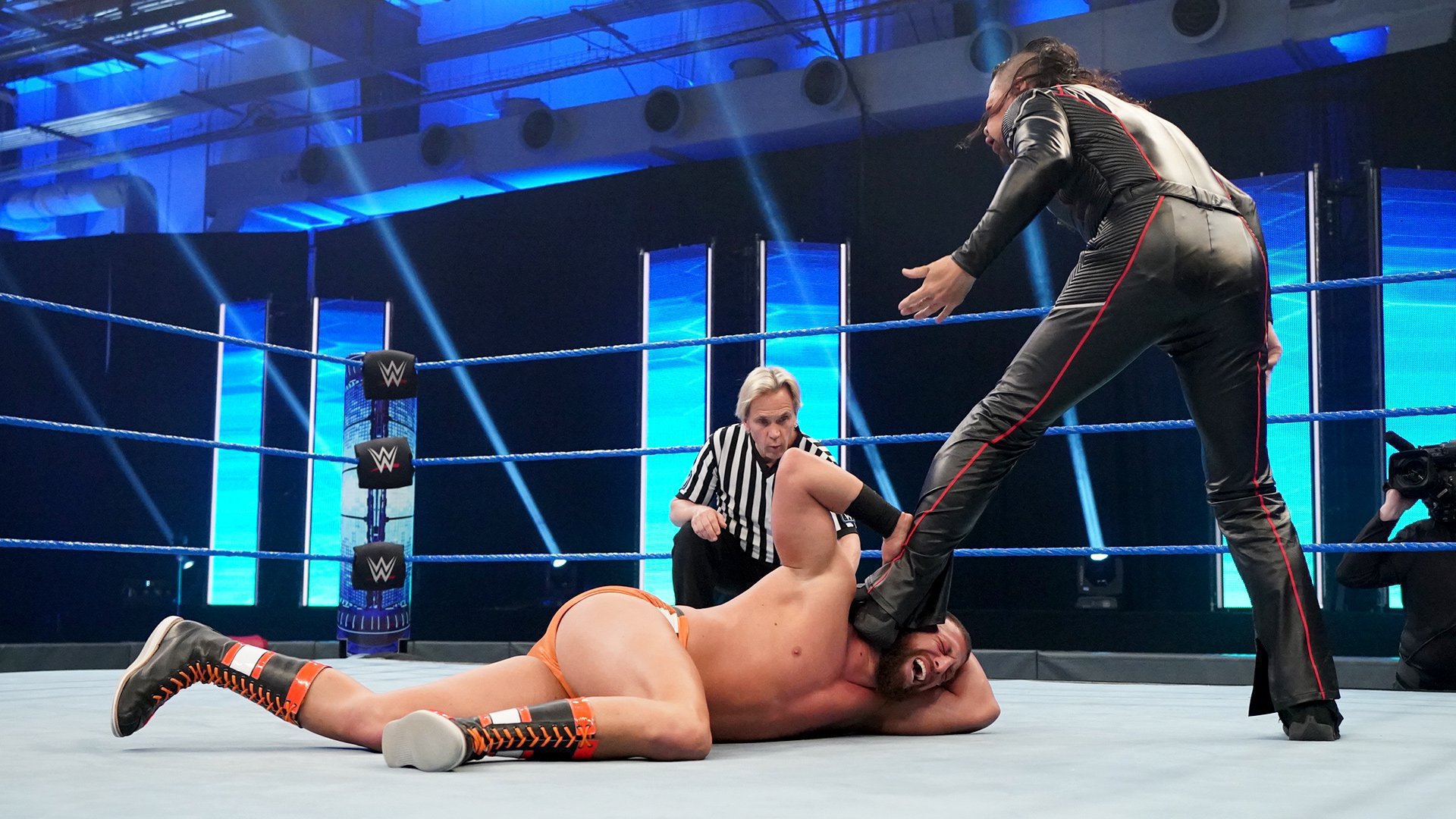 The stakes were simple, but incredibly high: If Drew Gulak defeated Shinsuke Nakamura tonight, then his new pupil Daniel Bryan would get an Intercontinental Title Match against Sami Zayn at WrestleMania 36.

Gulak and Nakamura, colliding for the first time ever, exchanged strikes and holds in an incredibly hard-hitting affair. With Bryan in Gulak’s corner and Cesaro and Sami Zayn out there to support Shinsuke, the match was contentious from open to close. In the closing moments, it appeared that The King of Strong Style had Gulak primed for the Kinshasa, but Bryan subtly helped Gulak evade the maneuver. It was so subtle that the referee did not see it, and it allowed Gulak to follow up and catch Nakamura with a pinning combination that secured the three-count. Zayn saw the assist, however, and petitioned to the official, but to no avail. He is now locked in to defend his title against Bryan at WrestleMania! 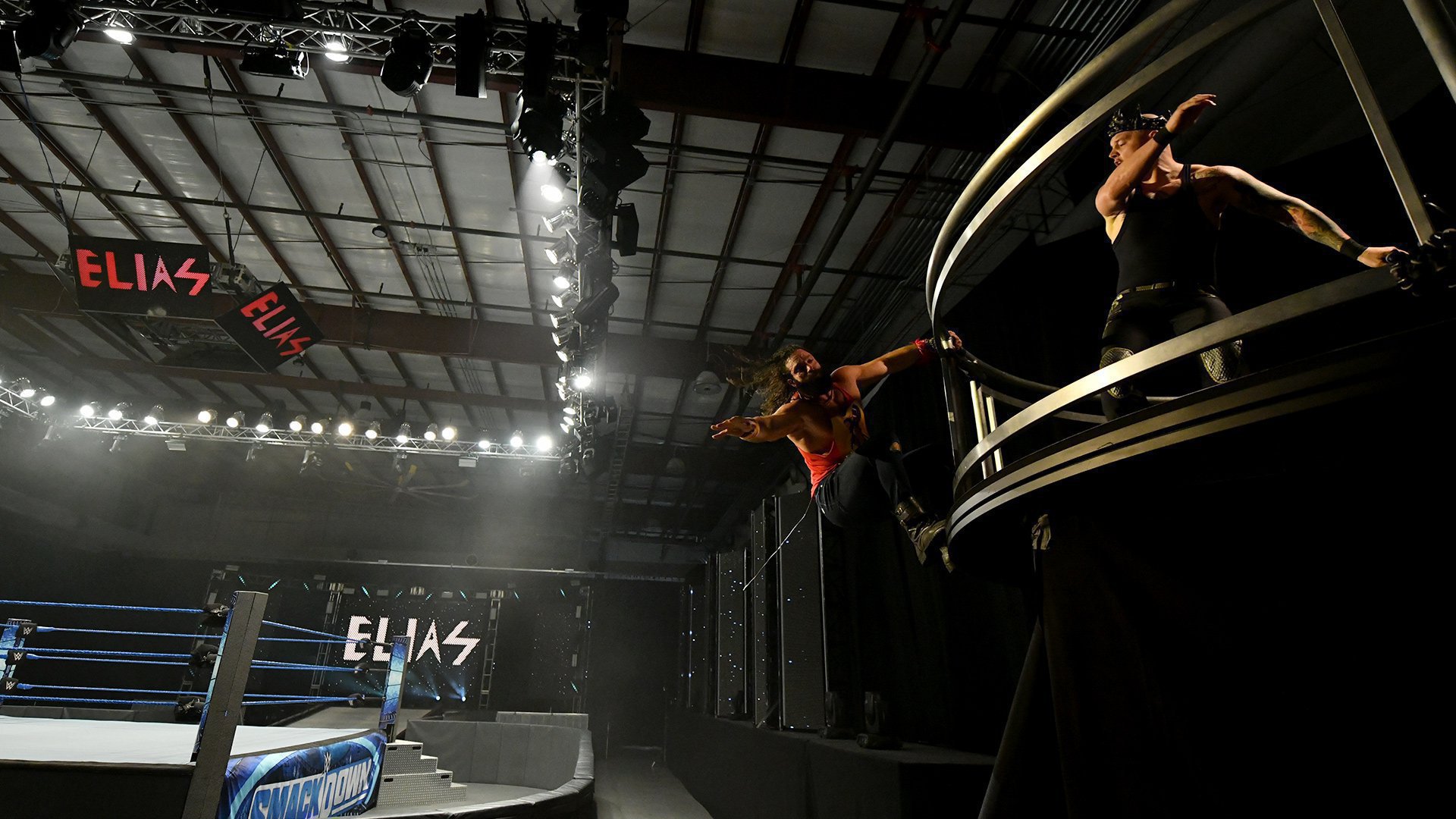 With his match against King Corbin at WrestleMania now official, Elias arrived on Friday Night SmackDown with one intention: embarrass King Corbin yet again!

Elias came equipped with a brand-new song to ridicule his nemesis, but King Corbin got the most maniacal last laugh, as he appeared out of nowhere to attack Elias. Corbin concluded the beatdown by throwing Elias over a railing and using his scepter to knock him off a perch to the floor. Corbin admired his work as medical personnel came to check on Elias in a horrifying scene. 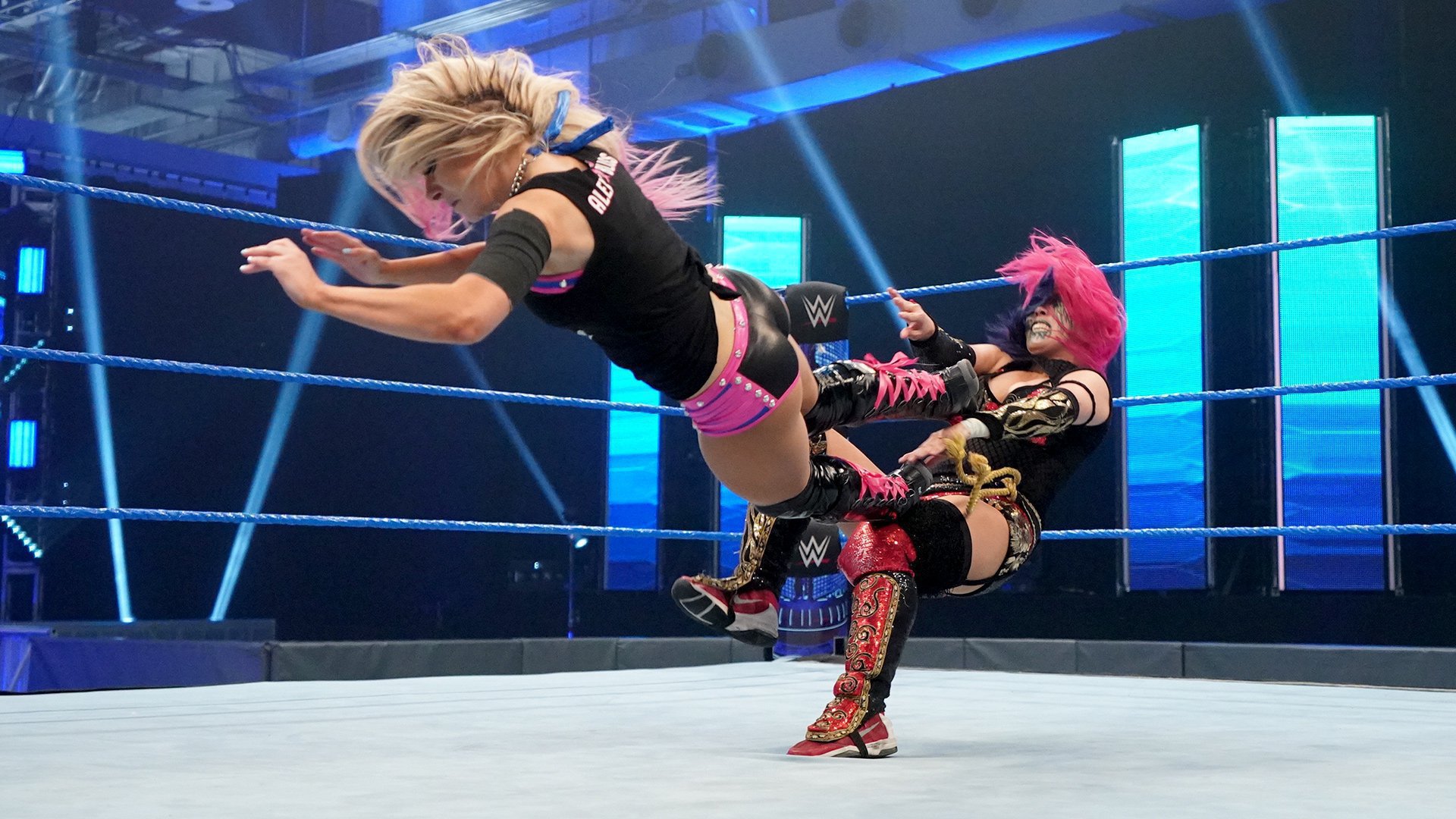 Bliss was as tenacious as ever, scrapping against the hard-hitting Asuka. Nikki Cross, who provided guest commentary with Michael Cole (much to Cole’s dismay), bugged out through the whole match while claiming that she and Alexa were the greatest WWE Women’s Tag Team Champions of all time. In the clutch, The Goddess stayed with The Empress of Tomorrow on a roll-through attempt, allowing her to connect with a pinpoint DDT for the massive victory.

The “Firefly Fun House” returned, and with it, a massive WrestleMania twist was born. Bray Wyatt took us through the oddities and complexities of the Fun House, as well as reflecting on his previous WrestleMania effort against John Cena six years ago, before arriving at a statement that took everyone off guard. Wyatt revealed that “The Fiend” Bray Wyatt was challenging Cena to a Firefly Fun House Match at WrestleMania 36.

What that meant, no one knew, but it sounded like an ominous proposition for The Leader of Cenation.

The Miz & John Morrison attacked The Usos and The New Day, resulting in a massive WrestleMania matchup 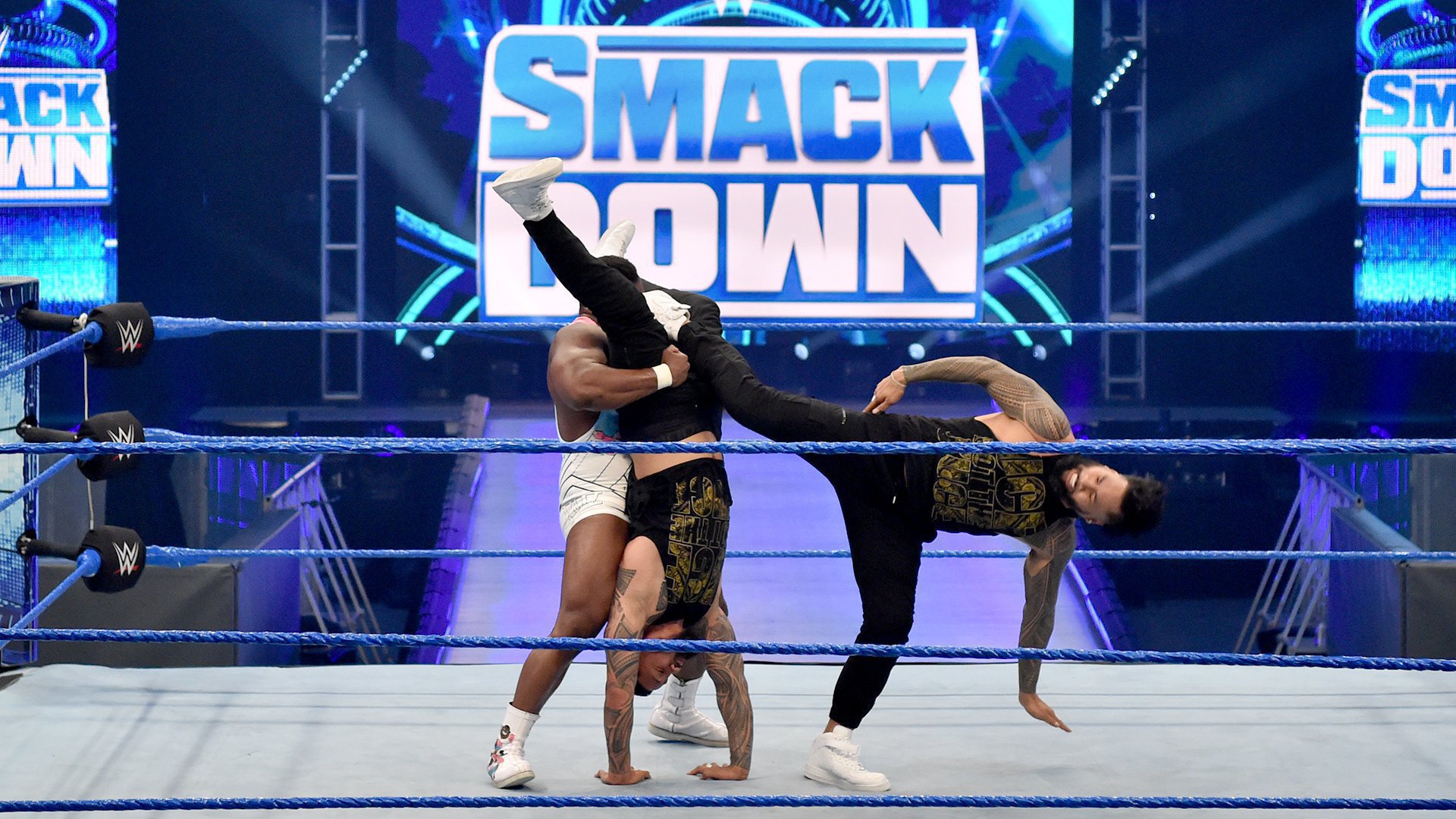 With SmackDown Tag Team Champions The Miz & John Morrison watching from the announce desk, The New Day and The Usos collided for an opportunity to challenge the titleholders at WrestleMania 36. Miz & Morrison had other ideas.

The two teams went back and forth, with Miz & Morrison reveling in it at the commentary desk. Eventually, Kofi Kingston heard enough, and New Day went after the SmackDown Tag Team Champions. After an absolute melee ensued, Miz & Morrison took advantage of the two teams’ conditions and assaulted them. However, Michael Cole interjected, revealing that WWE officials had informed him that due to the inconclusive result of this match, Miz & Morrison would now have to face both teams at WrestleMania… in a Ladder Match!