A main event pitting Daniel Bryan & Roman Reigns against King Corbin & Dolph Ziggler saw “The Fiend” Bray Wyatt emerge to target Bryan as well as the return of The Usos, who came to the aid of their cousin to close out a newsworthy Friday Night SmackDown. Also, Sheamus returned to ruthlessly ambush Shorty G, and John Morrison was spotted entering The Miz’s locker room. 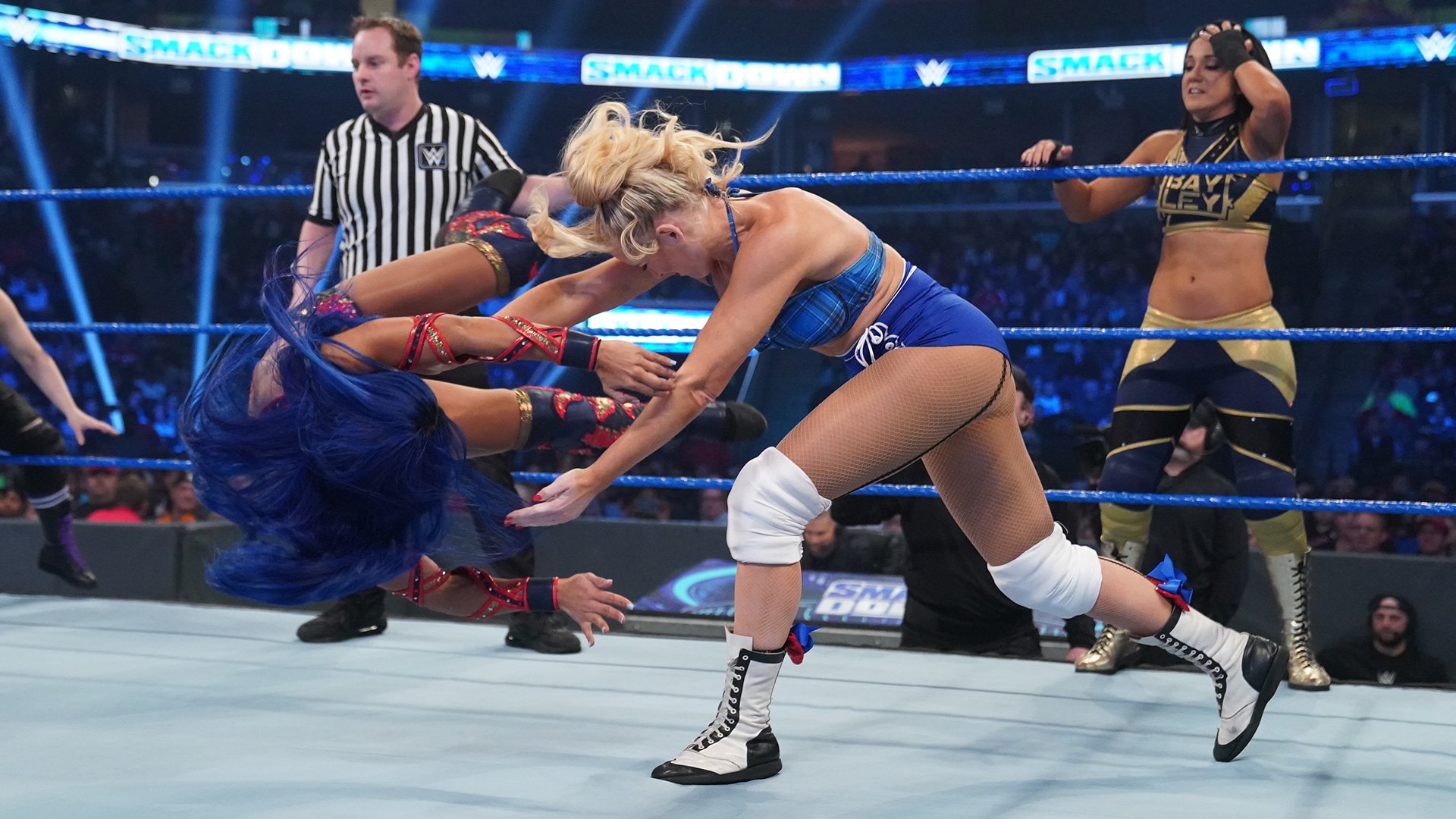 SmackDown Women’s Champion Bayley and Sasha Banks kicked off SmackDown with a familiar message – that they are the leaders of the SmackDown Women’s division, all the while continuing to talk about Lacey Evans’ daughter. Evans and Dana Brooke hit the scene to chirp back at Bayley and Banks, but before the two tandems could mix it up, Alexa Bliss & Nikki Cross hit the scene and announced their intentions to kick off 2020 by toppling both teams in Triple Threat action.

Evans attempted to get her hands on Banks at the start of the contest, but the ever-resourceful Boss quickly found her way out of the match. The critical moments came when Evans & Brooke neutralized Bayley, allowing The Sassy Southern Belle to catch an all-alone Sasha with a vicious Woman’s Right that gave Dana the opening to connect with a ring-shaking Senton Splash from the top rope for the win. 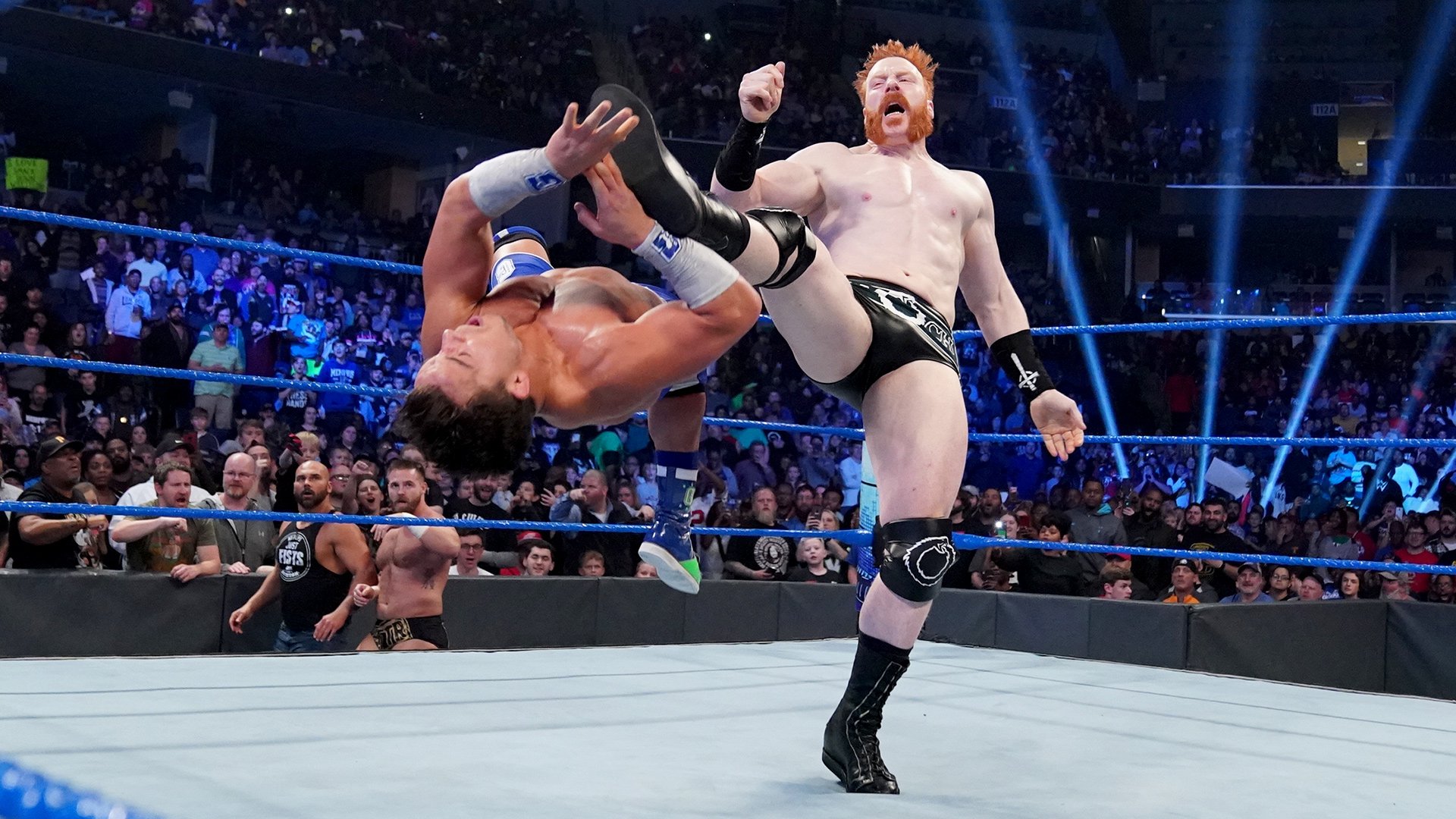 After The Revival came at him with some harsh words earlier in the evening, Shorty G took on Dash Wilder on the blue brand.

With his partner Scott Dawson providing guest commentary at ringside, Wilder kept Shorty G on defense with some ground and pound. However, the ever-resilient former Olympian fought back and locked his foe in the Ankle Lock for an academic submission victory. Shorty G had no time to celebrate, however, as Dawson bolted from the commentary table and blindsided Shorty G before the former SmackDown Tag Team Champions dropped their new rival with a Shatter Machine.

Their attack came grinding to a halt, though, as Sheamus made his long-awaited return, prompting Dash & Dawson to exit the ring. The bad news was just beginning for Shorty G, however, as The Celtic Warrior dropped him with a Brogue Kick before coldly glaring into the WWE Universe and taking his leave.

That’s one way to make a comeback.

The two long-tenured Superstars would have an ultra-competitive back and forth contest, but Kofi would ultimately catch Miz at the exact right moment with a rollup that secured him the victory. However, still clearly frustrated over his tensions with “The Fiend’ Bray Wyatt, Miz would waste no time after the bell to put the boots to Kingston, seemingly in a fit of frustration.

Not a positive note for either Superstar to end the match on. 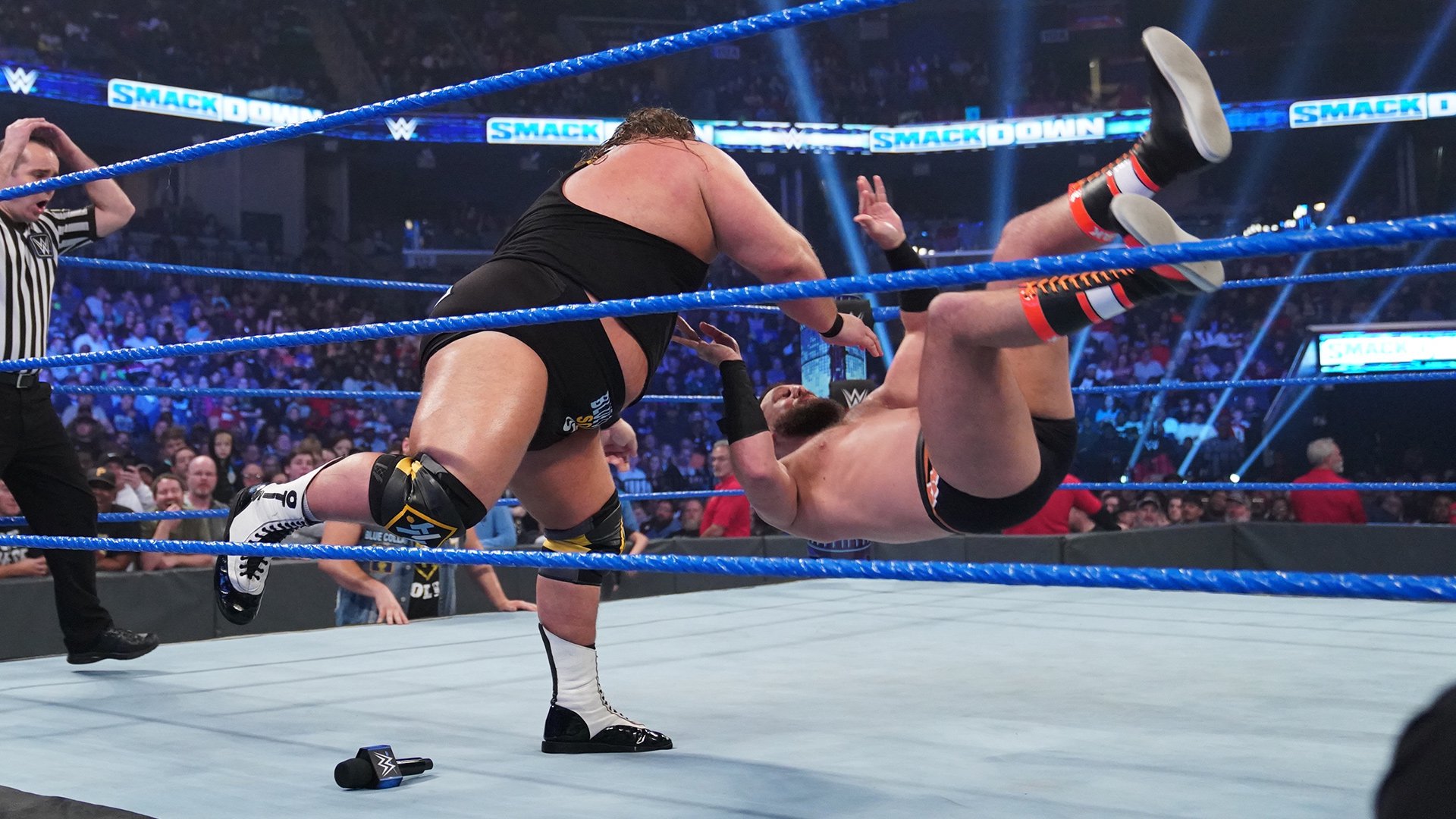 With Otis heartbroken after discovering the cake he gave Mandy Rose last week was crushed on the floor, Drew Gulak tried to add insult to injury right before their scheduled match by deriding the big man, which led to Otis going on an absolute rampage.

The former Cruiserweight Champion had no answers for Otis, which led to Otis finishing off Gulak with a thud-inducing splash off the second rope. However, unbeknownst to Otis, Dolph Ziggler tried to chat up Mandy during the contest. 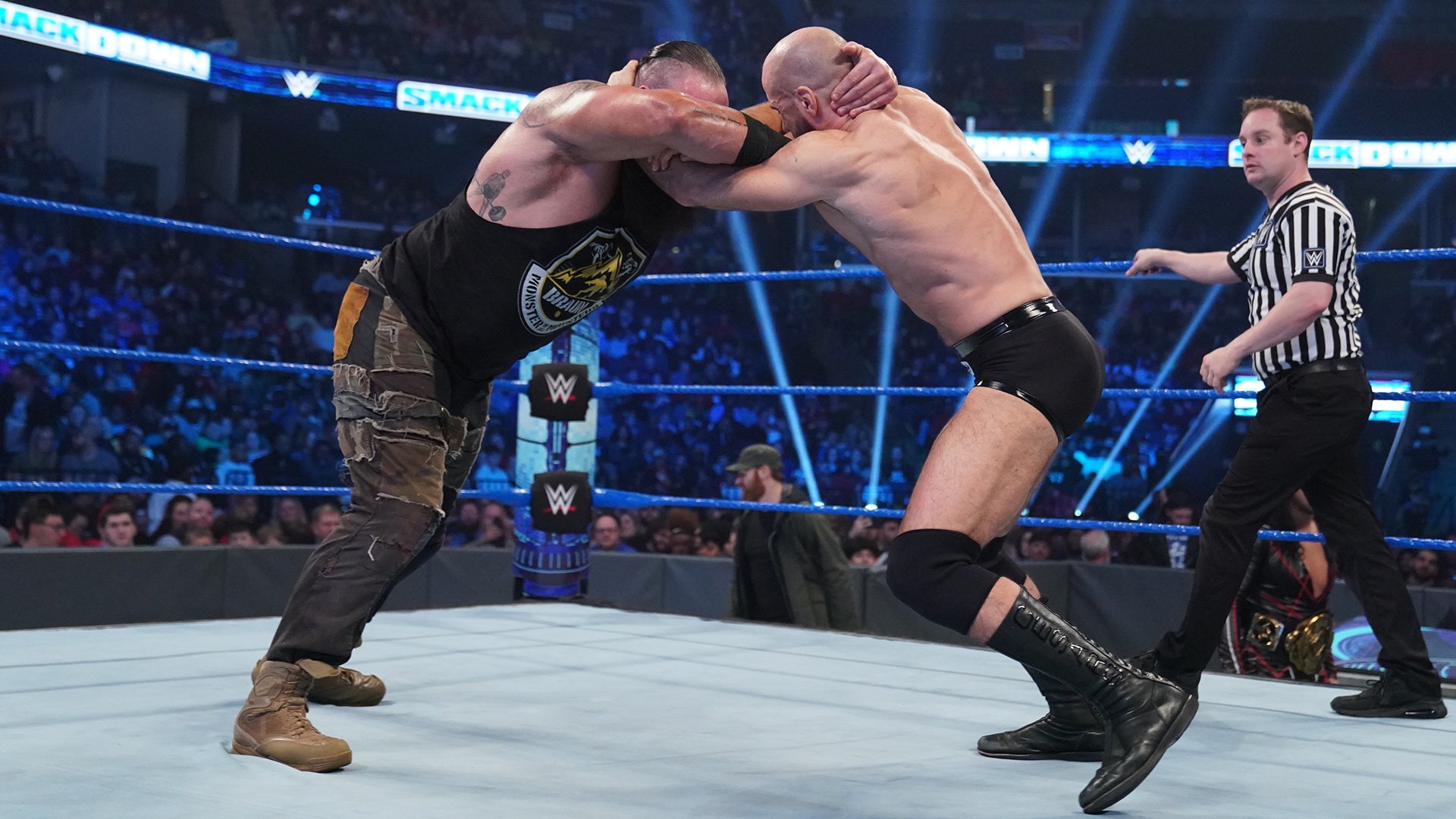 With his sights still set on Shinsuke Nakamura’s Intercontinental Championship, Braun Strowman tonight had to focus on another of Sami Zayn’s clients, Cesaro.

Riding the momentum of pinning Nakamura last week in Six-Man Tag Team action, The Monster Among Men looked to use his brute strength to throttle The Swiss Cyborg as Zayn and Nakamura lurked at ringside. After fending off constant distractions from both, Strowman connected with the Running Powerslam for the win.

Braun had no time to celebrate though, as he was struck with a Kinshasa from The King of Strong Style mere seconds after winning the contest. The knee left Strowman on dream street, but he nevertheless appears firmly on a path toward Shinsuke.

The match as scheduled was Daniel Bryan & Roman Reigns vs. King Corbin & Dolph Ziggler in the main event of Friday Night SmackDown.

But we wound up seeing many more faces than that.

The match had an unusual feel from the jump, as a surging Bryan was interrupted by flickering arena lights and the haunting sound of Bray Wyatt’s laugh. Bryan regained the form that was briefly halted earlier, but in the critical moments, Universal Champion “The Fiend” Bray Wyatt emerged, prompting Bryan to dive right through the ropes at his Royal Rumble opponent. Bryan’s efforts were unsuccessful though, as Wyatt applied the Mandible Claw and smashed Bryan through the barricade on the outside before reapplying the Mandible Claw.

Wyatt vanished just as quickly as he appeared, prompting Corbin & Ziggler to pounce on the solo Reigns. King Corbin & The Showoff tried to replicate their actions of a few weeks ago by attempting to handcuff The Big Dog and pour dog food on him, but their plan was thwarted by the returning Usos! Jimmy & Jey struck with a few vicious superkicks to dispatch Reigns and Corbin before helping their cousin to his feet, closing out an absolutely wild first Friday Night SmackDown of 2020. 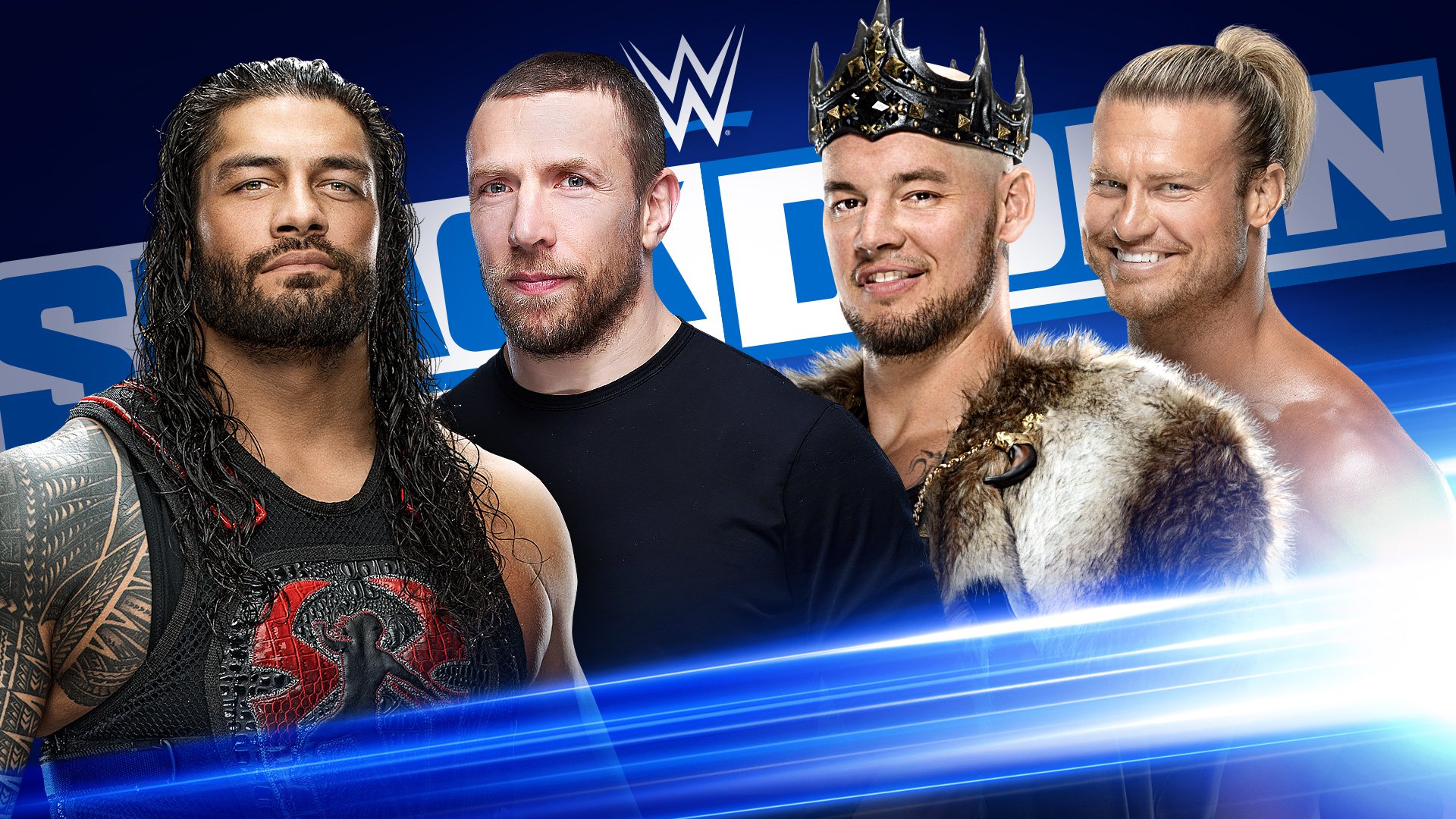 Seeing as how the final SmackDown of 2019 marked the passage of time, perhaps it was somehow fitting that Roman Reigns spent most of the episode clocking King Corbin.

First, The Big Dog launched an attack on the outspoken monarch at the top of the show that effectively delayed the scheduled Triple Threat Match between his adversary, Daniel Bryan and The Miz to determine Universal Champion “The Fiend” Bray Wyatt’s opponent at Royal Rumble. Then, in the main event, he destroyed Corbin’s chances at that opportunity outright by naturalizing him mid-contest.

As a result, King Corbin & Dolph Ziggler will be out for royal revenge when they go head-to-head against Reigns and the Superstar who won the Triple Threat Match, Daniel Bryan.

Don’t miss the all-out slugfest, tonight at 8/7 C on FOX.