Roman Reigns defeated Robert Roode in a high-stakes Tables Match that allowed The Big Dog to choose the stipulation for his match against King Corbin at Royal Rumble. The Big Dog would not disappoint, opting to face off against the King of the Ring in the always-unpredictable Falls Count Anywhere Match next Sunday.

Kane made a special appearance on Friday Night SmackDown that turned into a special, clutch reunion. The Big Red Machine, a Royal Rumble legend, first foreshadowed the opportunity that awaited every WWE Superstar competing in a Rumble Match next Sunday, but then found himself interrupted by Universal Champion Bray Wyatt from the Firefly Fun House. Wyatt also took to foreshadowing, saying that he would never forget the turbulent past he shares with Kane and then ominously saying, “Neither would he.”

Enter “The Fiend” Bray Wyatt. Arising straight through the ring, Wyatt prowled behind Kane until the two came face-to-face. With the WWE Universe in a frenzy, Kane showed no fear whatsoever in the face of Wyatt. Kane and Wyatt never came to blows, however, as Daniel Bryan arrived, dropped the Universal Champion with the Running Knee and continued an onslaught that saw Wyatt retreat back underneath the ring, but not before Bryan wound up with a fistful of Wyatt’s dreadlocks.

Team Hell No had an impromptu reunion, leading the WWE Universe in a “Yes!” chant and leaving all to wonder if Bryan had just gotten his first real leg up on his upcoming opponent.

In a subsequent backstage interview, Bryan proposed a Strap Match for his Universal Title bout against Wyatt at Royal Rumble!

After John Morrison dropped Big E last week to assist The Miz in The A-Lister’s win over Kofi Kingston (sporting a new blonde hair color this week), Morrison squared off against Big E with Miz and Kingston in their respective corners.

Competing in his first WWE match in over eight years, Morrison looked dynamic as ever, but he ran into trouble when Big E’s power began to shine. In the critical moments, Miz got up on the apron, but Kingston shoved Miz into the ring steps. JoMo took out Kingston, allowing Miz to recover and distract Big E just enough to give Morrison the opening he needed to connect with several strikes to Big E’s head. The former Intercontinental Champion followed up with Starship Pain for an impressive victory in his first match back.

The Usos def. The Revival

The Usos and The Revival are on contrasting paths – Jimmy & Jey looking to build on their monumental return to the blue brand, Dash & Dawson simply trying to get back on track.

This tag team contest saw far more of the former than the latter.

The Revival came out of the gates strong, looking to isolate The Usos for as long as they could, however, once Jimmy & Jey got rolling, they weren’t to be stopped. The former SmackDown Tag Team Champions took down The Revival in impressive fashion as Jimmy finished Dash Wilder with a massive splash for the win. 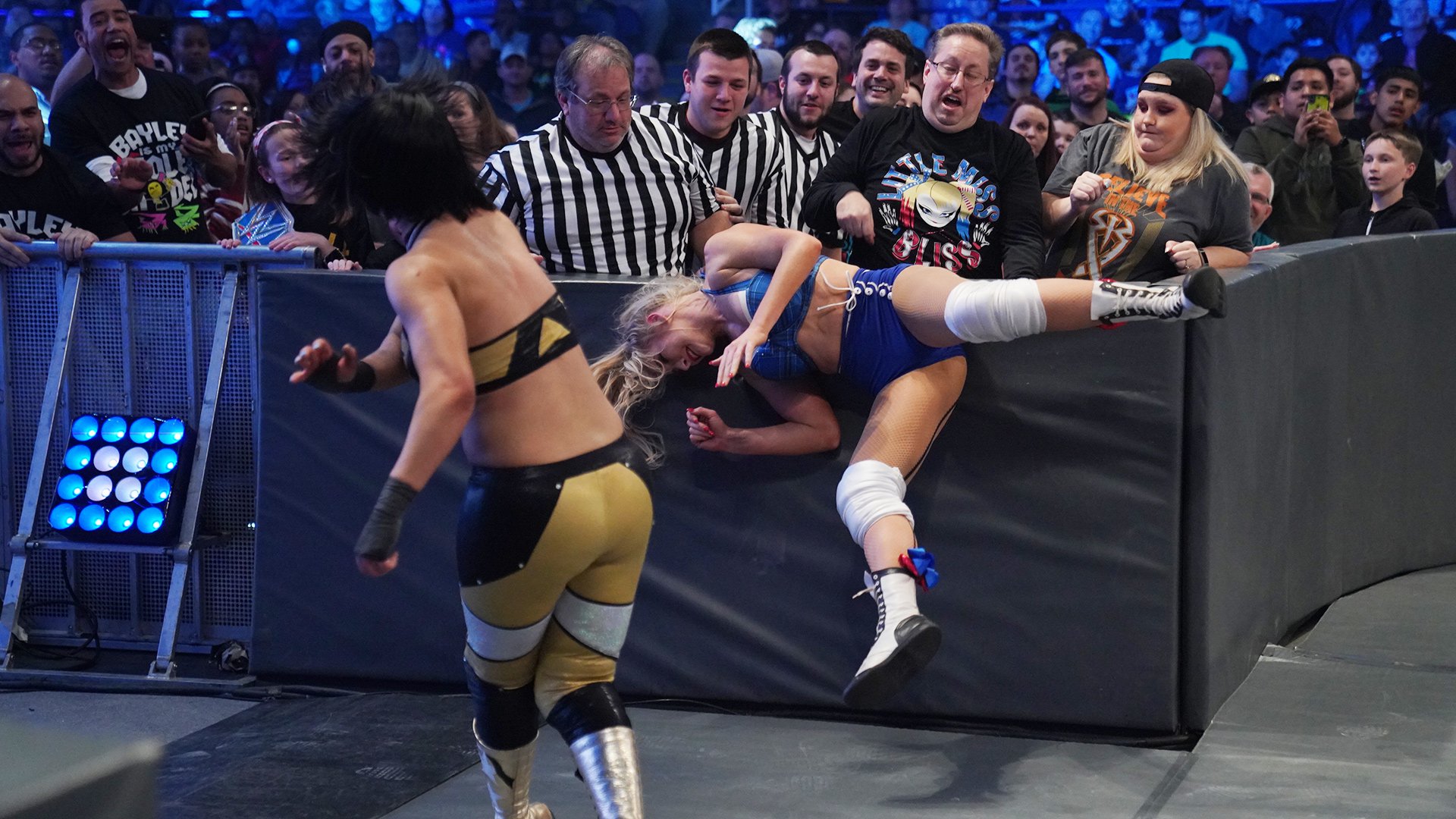 Following Lacey Evans’ raucous backstage brawl with Bayley and Sasha Banks that saw The Boss seemingly injure her ankle, Bayley was forced to saddle up against The Sassy Southern Belle in non-title competition on the blue brand due to Banks not being able to compete.

A clearly less-than-enthused Bayley attempted to put the boots to Evans in the early goings, looking for any advantage possible to put Lacey down for three. The Lady of WWE battled back with a gritty showing though, scoring a major victory over the SmackDown Women’s Champion after connecting with the devastating Woman’s Right. 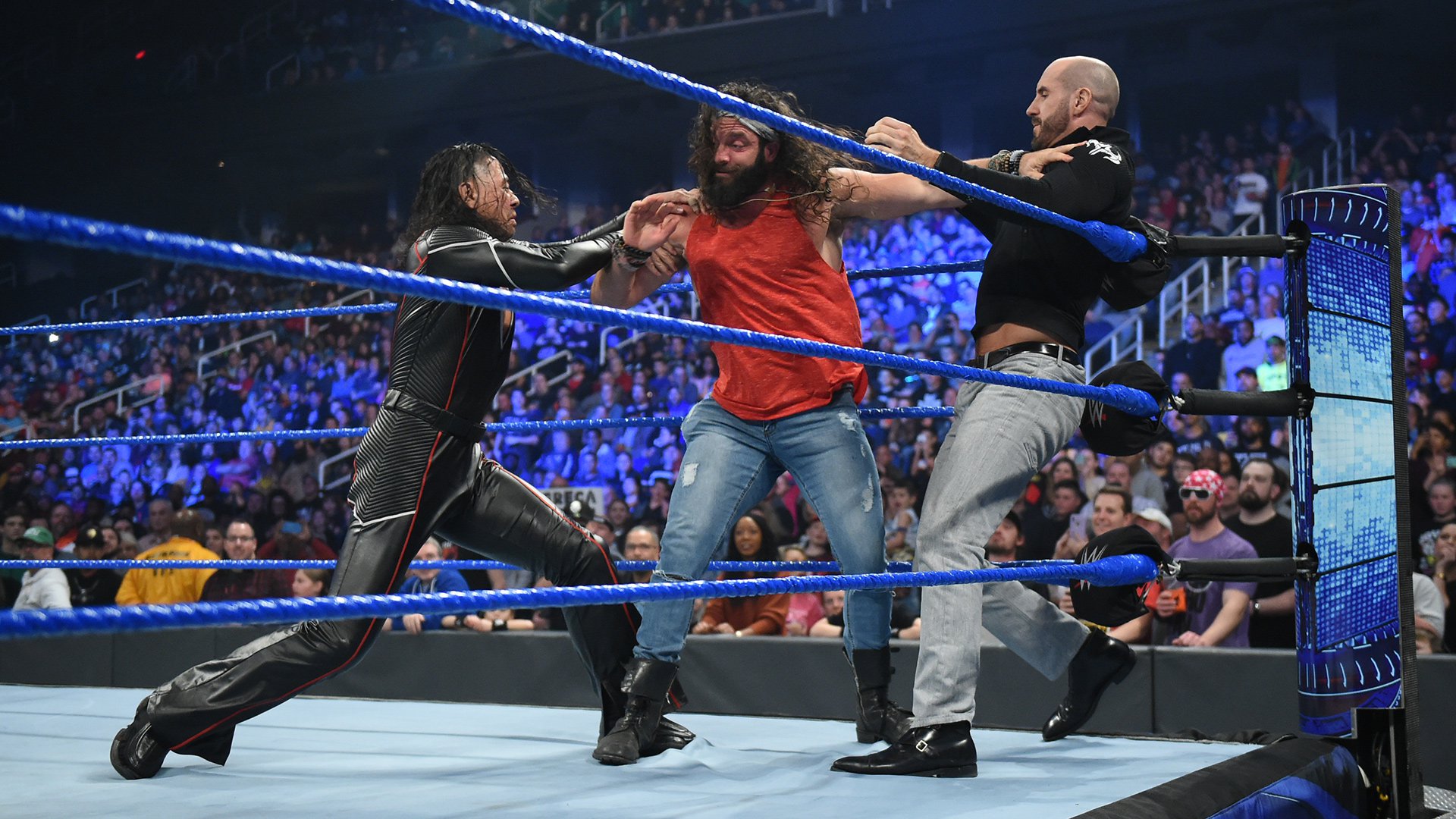 Elias has made it a weekly tradition to serenade the WWE Universe in attendance for Friday Night SmackDown with an original song, but Sami Zayn and company wanted to stop the music this week.

Zayn, Cesaro and Intercontinental Champion Shinsuke Nakamura interrupted and revealed that they simply had no interest in accepting Braun Strowman’s challenge to take on Nakamura for the Intercontinental Title. After Zayn declared The King of Strong Style for the Royal Rumble Match, Elias started singing a new song bashing Nakamura, Cesaro and Zayn, prompting Zayn and company to use their numbers advantage to beat down Elias. Braun Strowman had different ideas though. The Monster Among Men hit the scene, as he and Elias cleared house and left one very clear impression: Strowman is still eyeing Nakamura. 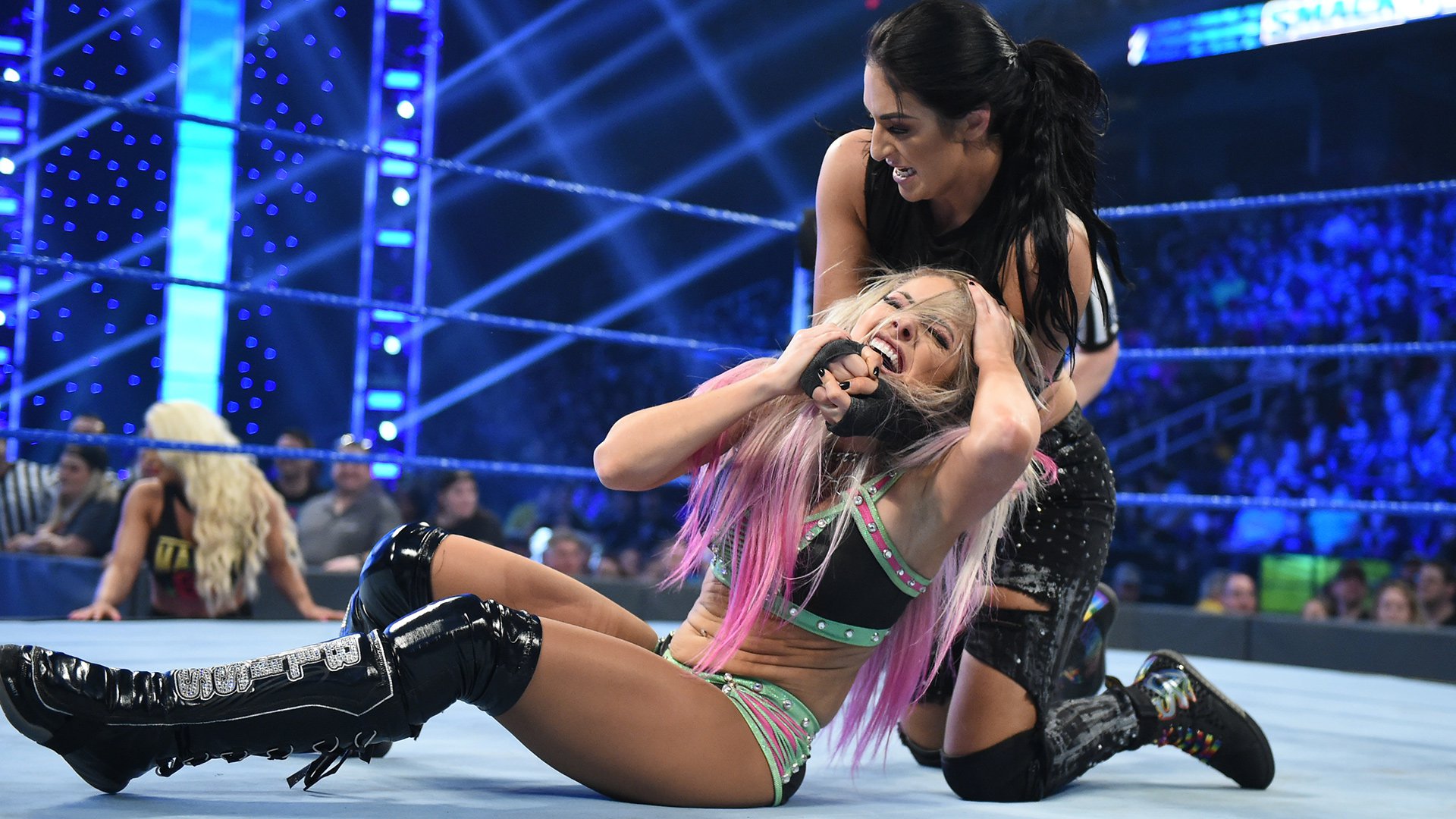 Last week, Otis paid major dividends for Fire & Desire. This week… not so much.

After Otis was unintentionally instrumental in helping secure Mandy Rose a victory over Alexa Bliss last week, Sonya Deville figured to keep the good vibes going by actually having Otis in her corner (along with Mandy and Tucker) tonight against Bliss, who was flanked by Nikki Cross.

A competitive match saw The Golden Goddess get up on the apron in an attempt to help Deville. However, Cross knocked Rose off the apron, and Mandy fell right into Otis’ arms as the two locked eyes. The chaos distracted Deville, giving Bliss just enough time to sneak up behind Sonya and roll her up for the victory.

Sonya was heated, Mandy was speechless and Otis was absolutely devastated. It’s hard to replicate success. 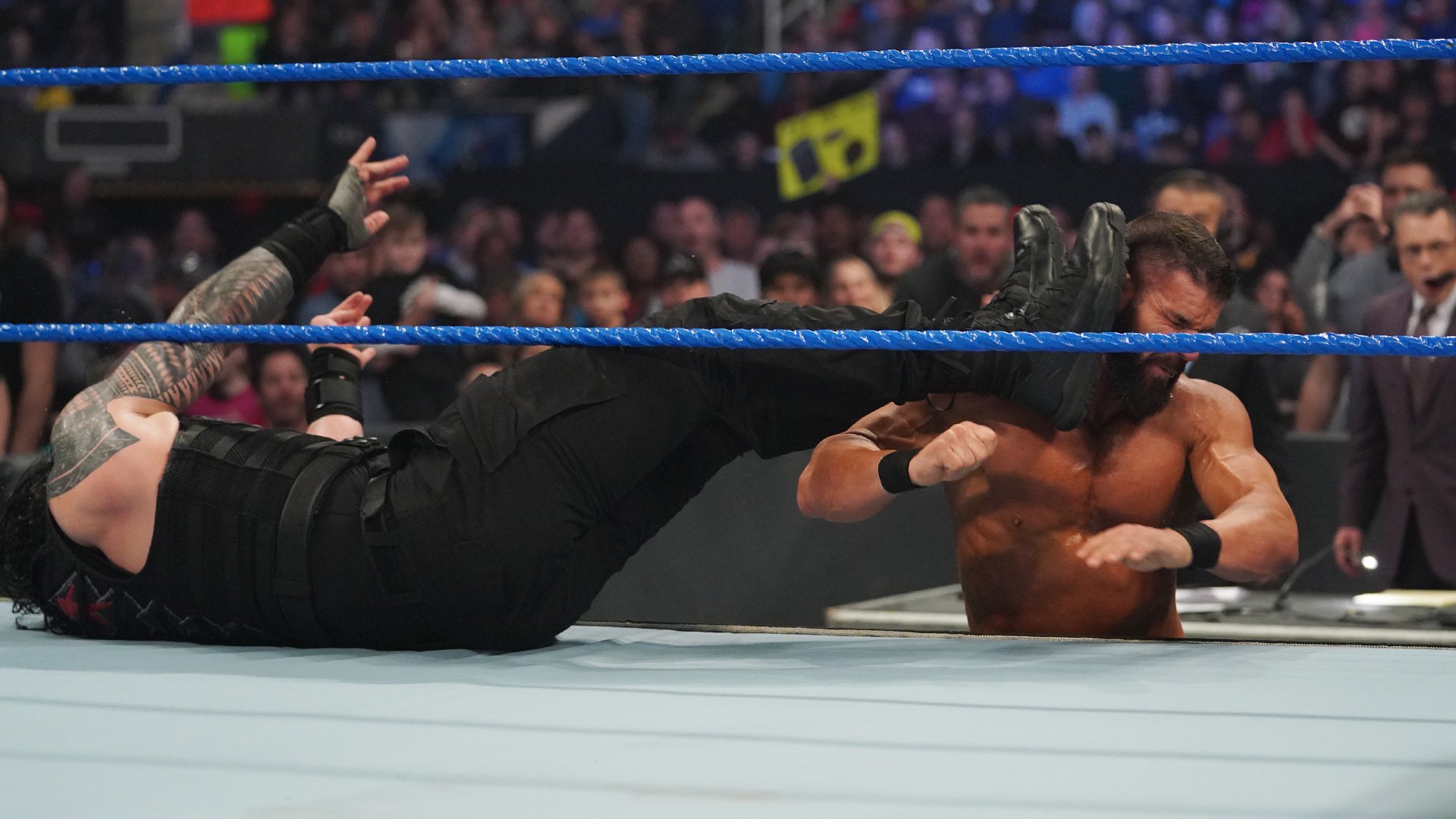 Robert Roode returned last week, getting instant retaliation on Roman Reigns for badly injuring him several weeks ago, leading to this Tables Match in the main event. The stakes were high because the winner would get to choose the stipulation for the match between Reigns and King Corbin at Royal Rumble next Sunday.

Roode ambushed Reigns from behind during The Big Dog’s entrance to jumpstart the action. The frenetic match changed completely when Roode used Reigns’ momentum against him to smash him through the barricade. That catastrophic moment prompted the arrival of King Corbin, who leered on from ringside as Roode attempted to put Reigns away. Dolph Ziggler then arrived, also trying to assist, but The Usos intervened, smashing Ziggler through a table and giving The Big Dog the needed space to finish off Roode with a massive Spear through a table for the win.

From there, Reigns would not disappoint, announcing that he and Corbin will collide in a Falls Count Anywhere Match at Royal Rumble next Sunday!