MADISON, Wis. — Faith and family mean everything to Quintez Cephus, and for 16 months, the Wisconsin wide receiver needed every bit of his faith and every member of his family more than ever.

Cephus and 10th-ranked Wisconsin (10-2, 7-2 Big Ten, No. 8 College Football Playoff) are one win away from capturing their first Big Ten championship since 2012. The Badgers will face No. 2 Ohio State (12-0, 9-0, No. 1 CFP) in a rematch for the conference title Saturday in Indianapolis.

But four months ago, football was gone, and Cephus’ fate rested in the hands of a jury in Dane County, Wisconsin.

“It was many times, many nights, every night, when I go to bed by myself and I don’t have people around me, you’re wondering what’s going to happen,” Cephus said. “You know you’re innocent, but you don’t know. Because of the place you’re in, the situation you’re in, the optics, you always get nervous about the ‘what ifs.’”

On the night of April 21 and early morning of April 22, 2018, the 21-year-old Cephus engaged in sexual acts in his Madison apartment with two 18-year-old women who were also University of Wisconsin students. The women later alleged Cephus raped them, saying they were too drunk to consent. Cephus maintained the sex was consensual and was arranged by one of his accusers.

Cephus was charged with second- and third-degree sexual assault, both felonies. The second-degree charge carried a maximum sentence of 40 years in prison.

Cephus was suspended from the Badgers football team in August 2018 and was expelled from the university for violating its nonacademic misconduct code.

Suddenly, Cephus found himself off the team, out of school and back home in Macon, Georgia, the place he worked so hard to get out of.

“When you grow up in Macon, man, it’s crazy how much stuff happens,” Cephus said. “You kind of get numb to people passing away. My dad always told me he could be here today and gone tomorrow because of some of the stuff that he had to do to make sure we were good.”

Cephus’ mother, Lakesha, raised him, his brother and sister in the central Georgia city of about 150,000. His father, Andre Taylor, did not live with the family but was a part of his children’s lives. Cephus even visited his father in state prison when Taylor spent four years there in the early 2000s for aggravated assault and cocaine trafficking.

Taylor, who was also known as “Gangsta Dre,” was a high-ranking member of the Westside Gangster Crips street gang, according to authorities. But Cephus said Taylor always made sure his son didn’t fall into the same lifestyle.

“He always showed me the other route,” he said. “He told me his stories and that’s what interested me, the stuff he went through. You have two options: You’re going to either live in that life or you’re going to try to make a way and be different than everybody. That’s what fueled me.”

While Cephus was a standout athlete in basketball and football at Stratford Academy, a private school in Macon, Taylor sent an email to Wisconsin wide receivers coach Ted Gilmore, who was recruiting soon-to-be Badgers receiver A.J. Taylor.

“I come off the road — spring recruiting — and I saw an email that said, ‘AJ,’” Gilmore said. “I assumed it had to do with A.J. Taylor. But it was Q’s (Quintez’s) dad. They called him A.J. I opened up the email and read it. It was about Quintez Cephus. So I pulled up the information and there was enough that intrigued me.” 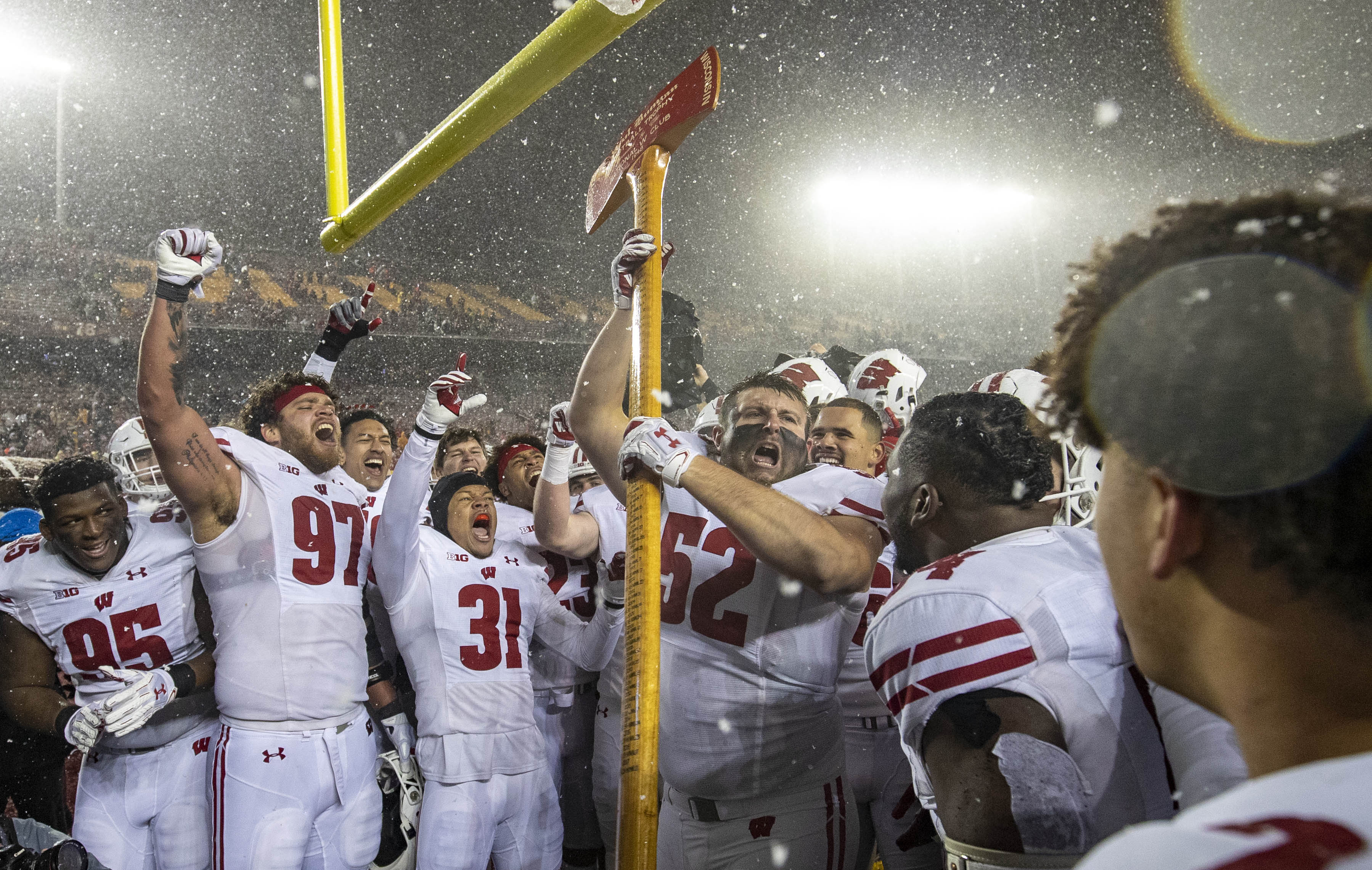 “I grew up around a lot of family,” Cephus said. “My family is the reason why I push and do some of things that I do in trying to be great and trying to set an example for my family. So when I came up here, that’s the type of vibe that I got. And Coach Gilmore, he was a guy that I really looked up to from Day 1 when I met him. It’s been a blessing to have the coaches and the teammates that I really saw in the guys when I came on my visit because I’ve obviously been through a lot and I needed good people around me. People that look more into the person than just the athlete.”

On April 3, 2017, during the spring of Cephus’ first year in Madison, his father was fatally shot in the head. He was 39.

“That was tough on me because that was my guy,” Cephus said. “That was my guy. He was the one that helped me to get to where I am.”

Cephus left practice and went home to Macon to be with his family. Gilmore went with him.

Gilmore, while recruiting Cephus, attended several of his high school basketball games. The first game he attended, he met Taylor. He made a promise to Taylor that he would take care of his son.

When Cephus was arrested on sexual assault charges, the first person he called was Gilmore.

“I called him as soon as I got a phone call,” Cephus said. “I told him everything that happened and he stuck with me because he believed that I was innocent and he knows who I am. Just having somebody like that that will support you, not just turn you loose.”

Gilmore said he never doubted Cephus for a second.

“I’ve never lied to him and he’s never lied to me,” Gilmore said. “That’s why when all of this came about, I said, ‘Q, tell me everything.’ And he told me everything. I said, ‘If that’s how it happened and if this is what’s going on, you tell the truth to everybody.’ And he never wavered. In my heart, I believe everything the kid said. Never doubted it. Never wavered from it. It may have been unpopular for others to see me support him in that way, but, hey, I wasn’t going to turn my back on him.”

Cephus was ordered to stand trial. The 6-foot-1, 207-pound black man sat in a Madison courtroom July 30 in front of a white judge, an all-white jury, an all-white prosecution team, an all-white defense and his two accusers, a white woman and a white and Hispanic biracial woman, according to his attorney, Stephen Meyer.

“We were walking through the courthouse and I was upset about something and he goes, ‘Mr. Steve, I’ve chosen not to hate because if I did, it would consume me,’” Meyer said.

Meyer argued during court hearings that the second-degree sexual assault charge should be dismissed because the woman linked to that count wasn’t drunk and parted with Cephus on good terms. Meyer said surveillance camera footage shows the woman walking down stairs in the apartment building without any difficulty after the alleged assaults supposedly took place. The footage also shows the second woman talking with Cephus at the apartment door in what appears to be normal conversation, Meyer said.

He also pointed to a text message one of the women sent to Cephus hours after the alleged assault asking him to look for a vaping device she left at the apartment. She closed the text with a heart and a kiss emoji, signaling she was interested in seeing Cephus again, Meyer argued in court filings.

After a weeklong trial, the jury came to its decision after deliberating for 41 minutes.

Cephus was acquitted of both charges.

Cephus was reinstated by school officials and was ruled academically eligible in time for the season opener at South Florida.

After missing the final five games of Wisconsin’s 2017 campaign because of a broken right leg, Cephus took the field for the first time in nearly two years. Twelve games later, Cephus leads the Badgers with a career-high 720 yards on 45 catches and has six touchdowns.

“I think he’s an unbelievable teammate because he truly cares about the guys and each individual,” Wisconsin coach Paul Chryst said. “He’ll do anything for them. He’s open to them. He’s got enough awareness that he kind of sees when someone’s working through something. He’s got a spirit about him. He’s got an infectious personality. He will find the good in people.”

Cephus will lead the Badgers against second-ranked Ohio State on Saturday in the Big Ten Championship Game. He will have a one-on-one battle with Buckeyes cornerback Jeff Okudah, who is widely regarded as the top defensive back in the country.

“It’s what you want. It’s the reason why I worked to get where I am today,” Cephus said. “It’s the reason why our team has worked and bled and cried and persevered. And to get to face all these great players across the board, for our team, it’s such a great opportunity.”