Upon Further Review: Badgers self-inflicted wounds too much to overcome in Rose Bowl loss

Wisconsin should have won its Rose Bowl matchup against Oregon. But it’s easy to see why the Badgers lost.

Simply put Wisconsin shot itself in the foot. Multiple times.

A questionable offensive pass interference call likely stood out in the eyes of fervent fans, but the Badgers never should have put themselves in that situation (and, yes, unfortunately refs make bad calls in every football game).

Let’s do a quick recap of some of the ugliness. The worst of the bunch is turnovers – Wisconsin had four and it resulted in 21 of Oregon’s 28 points in the game. One turnover – punter Anthony Lotti dropping the ball — was returned for a touchdown while two gave the Ducks a short field, allowing them to score after taking over from the Badgers’ 33- and 30-yard lines, respectively.

There were nine penalties committed by Wisconsin for 79 yards – both tied season highs. There was a missed field-goal attempt by Collin Larsh from 47 yards, which would have been a career high (he matched his longest earlier in the game with a 44-yarder). Three dropped passes. One red-zone trip which ended with three points instead of seven. Danny Davis slipping on a third-down route late in the game, Wisconsin having to punt – just an exclamation on the Badgers’ third-down troubles, UW converting just 5 of 17 chances.

It all helped add up to a 28-27 loss to Oregon, Wisconsin’s fourth straight in a Rose Bowl. It also ended the Badgers’ five-game bowl winning streak, which was the longest in school history.

And it’s too bad because beyond driving 75 yards for a touchdown on its opening possession, Oregon could do very little against Wisconsin’s defense.

The Ducks finished with 204 yards of offense – their previous low on the season was 320; Oregon entered averaging over 458 yards per game – averaging just 4.0 yards per play. Oregon gained only 66 yards on the ground (although quarterback Justin Herbert did rush for three touchdowns).

Oregon only had four drives which lasted longer than 25 yards – three resulted in touchdowns and the fourth, the Ducks’ final drive, was 38 yards and allowed them to run out the clock on the game.

Wisconsin dominated the statistical side of things but Oregon had the lead in the only thing that mattered – the score.

Here’s a recap of Wednesday’s game:

We’ve said it before but it’s hard to imagine where this Wisconsin offense would be in 2019 without Quintez Cephus. The Badgers offense struggled in the first quarter, barely moving the ball. It’s no coincidence that Cephus wasn’t targeted at all in the first 15 minutes. He’d end up with seven catches for 59 yards, not exactly eye-popping numbers, but Cephus made a couple of great catches and caught the only touchdown pass from Jack Coan. He also drew a pass interference penalty by the goal line which helped set up his TD catch. In all he was targeted 12 times, including that penalty. No one else on the Badgers had more than five targets. Cephus was tightly guarded in the fourth quarter and was targeted only twice, one of those coming on a third-and-20 heave into traffic which had no chance as Wisconsin couldn’t finish things off in the final quarter.  That’s how important Cephus was to the offense in 2019 and, more specifically, in this game.

The defense deserves some credit in this space. Wisconsin did allow that big opening drive but after that initial possession, Oregon’s next five drives went for 0, 4, -3, 2 and 9 yards. The Ducks would only score against the Badgers D again thanks to short fields. Linebacker Noah Burks helped lead the charge. He finished with seven tackles and a team-high 1.5 tackles for loss. In the fourth quarter after Wisconsin had extended its lead to 27-21, Oregon drove to the Badgers’ 35-yard line. But on third-and-2, Burks and Donte Burton sacked Herbert for an 8-yard loss and Oregon punted. At the time, it was as big a play as there was in the game. Obviously things went downhill after that, but kudos to Burks on the defense for helping to keep this a game throughout.

It was disheartening for Wisconsin to see Oregon move right down the field on its opening possession. If anyone was down, attitudes perked up after Aron Cruickshank returned the ensuing kickoff 96 yards for a touchdown. It was the longest kick return in a bowl game in Badgers history (Kenzel Doe had the record of 91 yards in 2014). It was the first kick return in a Rose Bowl since 2003 and the second longest in the bowl’s history. It was also the first kick return touchdown allowed by Oregon since Sept. 30, 2006. Cruickshank became the third Badger to have two kick return touchdowns in one season, joining Ira Matthews (1976) and Nick Davis (1999). Cruickshank would averaged 49 yards on his four kick returns, putting his season average at 29.3 – second-highest in UW history and just one of three to have an average of better than 29 yards (minimum 10 returns). Cruickshank is seventh in FBS in kick return average as well. Certainly a memorable Rose Bowl moment.

Jonathan Taylor rushed for 94 yards on 21 carries – it was just the ninth time he’d been held under 100 yards at Wisconsin (and one of those came in his debut when he only got nine rushes). In those nine contests, the Badgers went 5-4. Now in those nine games, Taylor was held without a touchdown (rushing or receiving) five times. Wisconsin was 1-4 in those games with the only win coming in a 24-10 victory at Illinois on Oct. 28, 2017. One more Taylor number: He fumbled for the 18th time in his three years, with 15 lost. It was his sixth fumble of the 2019 season, five which were lost.

“Huge, I mean, lose by one point, those are opportunities, and you just have to kind of keep finding ways, and we didn’t. But all those are big. We’re driving. We get a penalty. J.T. has a nice run and we get a penalty and didn’t overcome that. We didn’t overcome ourselves.” — head coach Paul Chryst on turnovers, missed field goal and getting a field goal instead of a touchdown in the red zone

“When you have those things happen in a game, it will definitely hurt you. Possibly slim chance you could win, but definitely put you in a tough position when you have self-inflected penalties, special teams problems, turnovers. But when you’re playing an elite team like Oregon, a great team like that, they’ll capitalize on those mistakes. I think that was the biggest part on us, is understanding we should have had to clean things up. You can’t expect a win, a burst team like Oregon, with turnovers, penalties, special teams issues. I think that played a factor with everything, not playing clean Wisconsin football.” — running back Jonathan Taylor 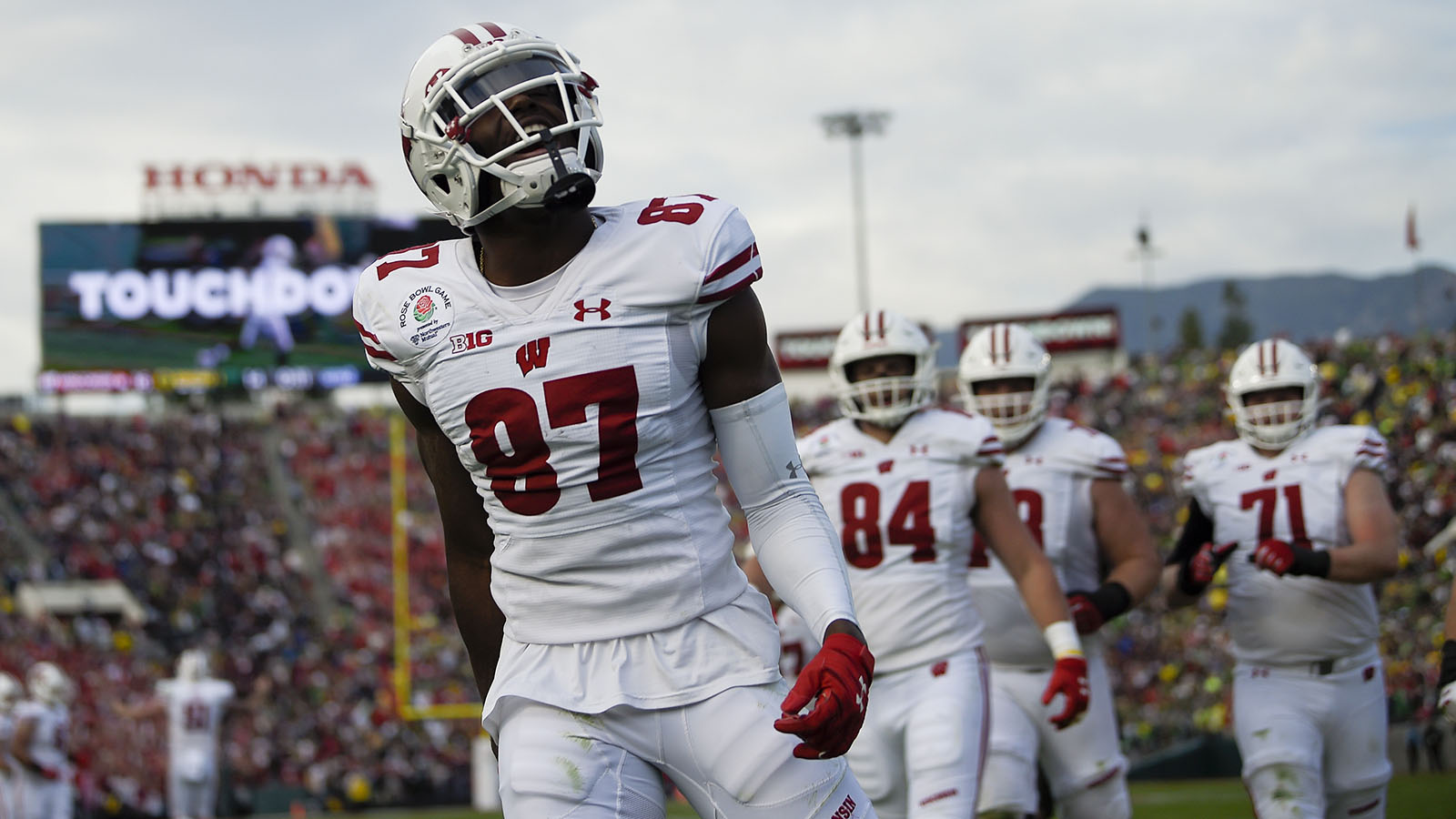 “Hurt, disappointment, mostly in myself. Feel like you let your teammates down, trust in the leadership position, you feel like you let them down when you can’t make, find a way to pull through for them. But it’s a terrible feeling. It’s the worst feeling in football to lose a game, and to know it’s your last time hurts you even more. You hurt more for everybody else around you more so than even yourself. I’ll probably just say hurt.” — linebacker Chris Orr on his feelings after losing

“It’s been amazing, people ask me about Camp Randall, but it’s just a stadium like any other stadium. But it’s the people that fill the stadium and the fans that take time out of their jobs and daily lives day in, day out to spend their hard-earned money to come watch us play a game we love. It’s definitely the fans that make Camp Randall what it is. Coming out here, we travel well. They made it feel just like Camp Randall today.” — Taylor on the fans, who gave him a standing ovation after the game

Can Wisconsin reload and make another run in 2020? Expect Jonathan Taylor and Tyler Biadasz to leave for the NFL. Linebackers Zack Baun and Chris Orr, seniors, will need to be replaced. The Badgers didn’t have many seniors, though, and have had some decent recruiting classes. There will be some calling for Graham Mertz at quarterback but expect Jack Coan, who will be a senior, to be at the helm once again when Wisconsin opens its season with a Big Ten game – against Indiana on Sept. 5.