Preview: Packers could send a message in primetime showdown with Detroit

GREEN BAY, Wis. — The stakes will be high on Monday night.

The Packers and Lions enter Week 6 as the only two teams in the NFC North with one loss. A win in the primetime showdown at Lambeau Field will no doubt send a message to the rest of the division and the conference on which team is a serious contender.

“We only got one Monday night game, so we got to take advantage of that and let everybody know the type of team we are and the type of players we are,” Lions safety Quandre Diggs said. “We just have to go out there and have some fun and enjoy the bright lights.”

Detroit (2-1-1) has won four in a row against Green Bay (4-1) for the first time since the 1982 and 1983 seasons. Will Detroit’s success last season, including a 31-0 drubbing at Lambeau, help the team slow down Aaron Rodgers on Monday night?

“It probably makes me more nervous than anything to be honest with you, just knowing what a competitor he is,” coach Matt Patricia said.

The Lions have won three of four at Green Bay after ending a 24-game road losing streak in the series in 2015.

“The toughest part of playing at Lambeau is the Packers,” quarterback Matthew Stafford said. “It’s not the environment.”

AARON’S READY, BUT IS DAVANTE?

Rodgers has thrown for 300-plus yards and achieved a passer rating of at least 100 in four consecutive Monday night starts. That’s the longest streak in the history of “Monday Night Football.” But will the two-time MVP have to take the field for the second straight week without his favorite target?

Receiver Davante Adams said Thursday he wasn’t sure if he’ll be able to play on Monday after suffering a turf toe injury during the Packers’ Week 4 loss to the Eagles.

“It is a major injury so it’s something that we gotta pay attention to and make sure we monitor in the correct way to make sure that it’s not something that gets re-aggravated later on in the season or I come back a little too early and really mess the thing up,” Adams said. “So we are really just trying to pace it at this point. I can’t really tell you when I’m going to play. I don’t know. it doesn’t feel how I want it to feel at the moment.”

Adams was having his best game of the season before going down in the fourth quarter against Philadelphia. The two-time Pro Bowler had 180 yards on 10 catches but was not on the field when Green Bay suffered its only loss of the season. 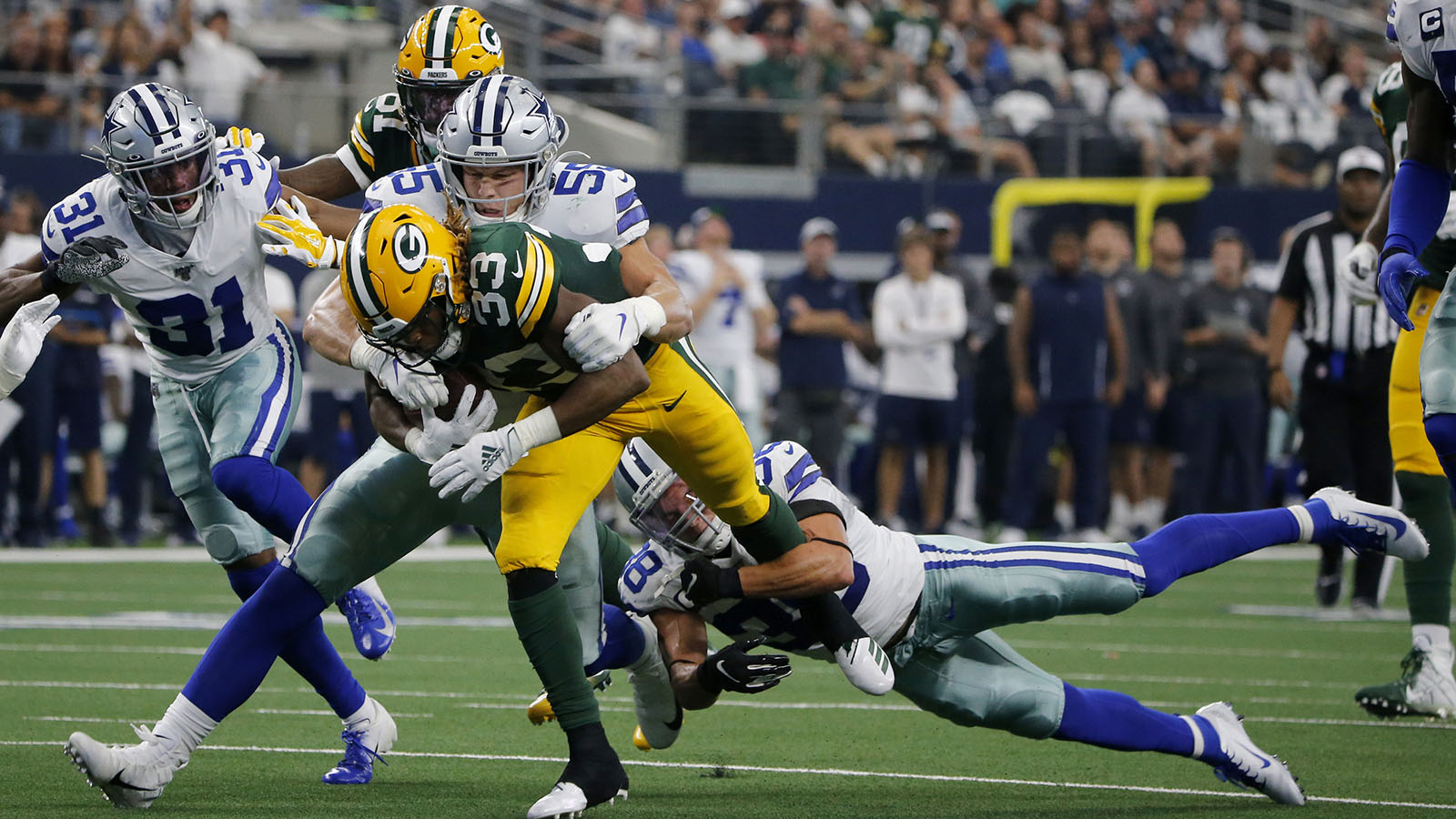 Diggs is not afraid to express his affection for Rodgers as a player and person.

“I’ve always been an A-Rod fan since I was in high school and college and he’s a cool guy,” said Diggs, who met Rodgers when he entered the draft four years ago because they’re represented by the same agency.

AN ENCORE FOR JONES?

Running back Aaron Jones had four touchdowns in the Packers’ win at Dallas last week. Jones, who played high school and college ball in El Paso, Texas, became the first player ever to run for four touchdowns against the Cowboys. Jones finished with 182 scrimmage yards (107 rushing and 75 receiving).

“He’s a great kid and does it all the right way,” Rodgers said of Jones. “So you can’t help but to be excited for a guy like that. It couldn’t happen — a game like that — to a better guy, a better teammate.”

Lions receiver Danny Amendola is expected to play after missing the team’s previous game, a four-point loss to Kansas City in Week 4.

“He brings that fire, energy and juice,” receiver Marvin Jones said. “Happy to have him out there.”

RETURN OF THE MIKE

Lions defensive tackle Mike Daniels may face his former team for the first time. Daniels was inactive in Detroit’s previous game against the Chiefs with a foot injury. The Packers released the former Pro Bowler in July, and Daniels signed a one-year deal with the Lions two days later. Daniels spent his first seven seasons in Green Bay.

STREAKS, STATS AND NOTES – Green Bay is 1-1-1 against Detroit on Monday night. … Lions coming off bye. … Detroit lost last Monday night game to New York Jets 48-17 in coach Matt Patricia’s debut last year. … Lions LS Don Muhlbach to break tie with Hall of Famers Reggie White and Chris Doleman for games played, appearing in 233rd to move into tie for 97th with players such as James Lofton on all-time list. Muhlbach ranks 10th among active players in games played. … QB Matthew Stafford 352 yards passing from 40,000-yard mark for career. Matt Ryan reached mark fastest in 151 games, six more than Stafford has played. … Stafford one TD pass away from 35th against Packers, breaking tie with Hall of Famer Johnny Unitas for most against them. … Lions have given up league-low 393 yards receiving after catches. … Detroit defense allowing NFL-low 1.76 yards inside its 20. … FS Tracy Walker had career-high 12 tackles against Kansas City. … Green Bay 27-11 against Lions since 2000. … Packers 16-3 at home (.842) against Detroit since 2000. … QB Aaron Rodgers has led Green Bay to seven wins in nine starts at home against Detroit, throwing 17 TDs and three INTs with passer rating of 109.4. … Rodgers has passer rating of 100-plus in six of nine home games against Lions. … If Packers win, it will be their first 3-0 start in NFC North since 2012. … Fantasy tip: Stafford averaging 283.3 yards passing and has thrown nine TDs without INT in past four games against Green Bay.