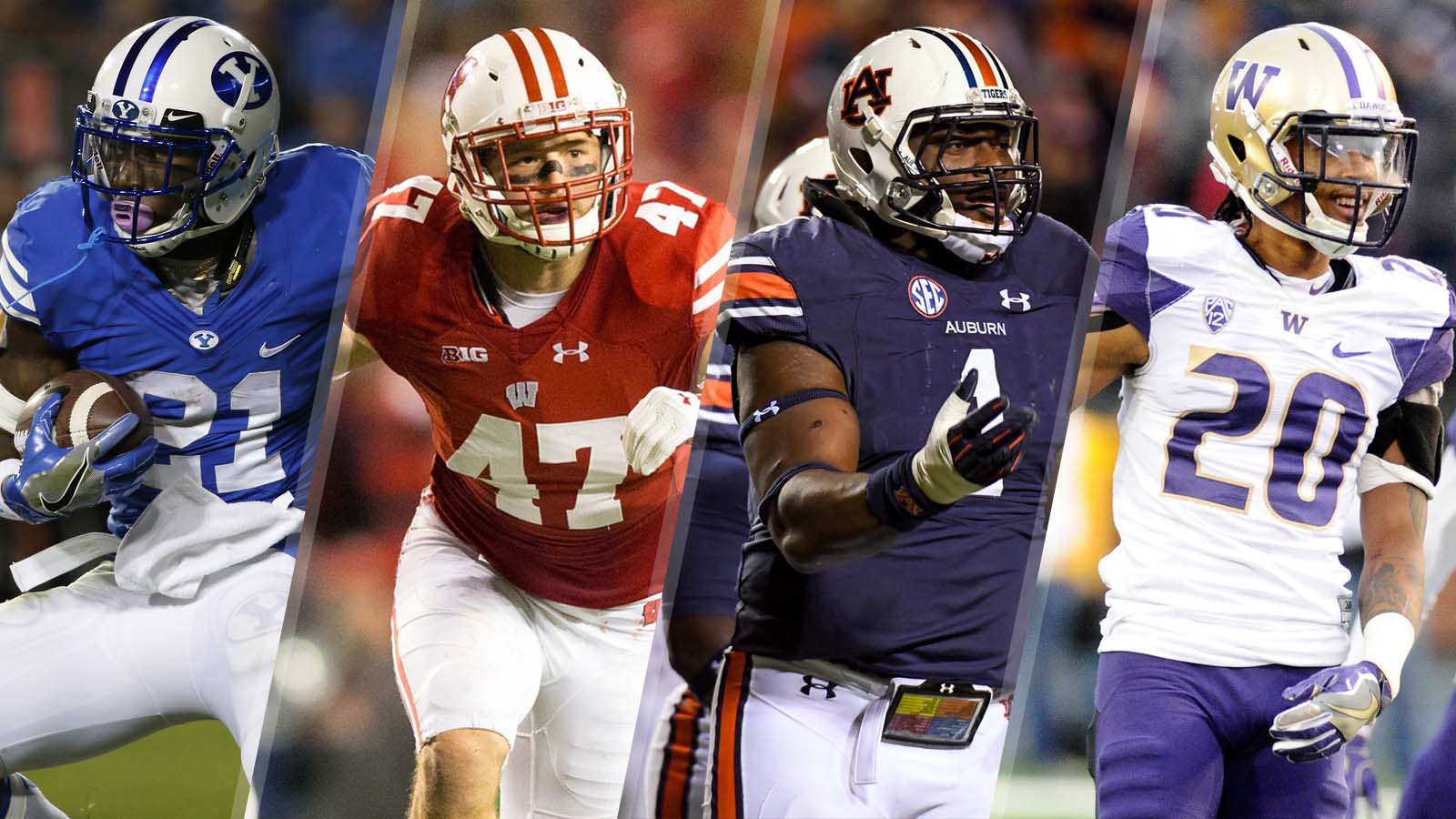 The 2017 NFL Draft is over and of course people are quick to judge how teams did.

Normally, you really need three or five years to grade a class (like we did here and here).

But who is kidding who — we all want to know what others think of the selections made by our favorite team now. And there are plenty people doing just this.

We’ve tried to compile as thorough a list of Green Bay Packers draft analysis as you’ll find anywhere on the Internet. Without further adieu, enjoy.

— Dieter Kurternbach of FOX Sports: A+. “Yes to everything on this board. They added two of the best secondary players in this draft in the second round, a perfect fit for them in the middle of their line in Montravius Adams in the third round, a high-floor outside linebacker in Vince Biegel and three really good running backs — Aaron Jones could be a stud. Don’t sleep on Malachi Dupre, pick No. 247, either.”

Kurtenbach also gave out individual grades of the Day 2 picks. His grades: Kevin King — B; Josh Jones — A+; Montravius Adams — A.

— Chris Burke of SI.com: B+. “The defense was priority No. 1 for GM Ted Thompson, so he delivered CB Kevin King (pick No. 33, after a trade out of Round 1), versatile S Josh Jones (No. 61) and underrated OLB Vince Biegel (No. 108). He also used a third-rounder on DT Montravius Adams (No. 93), which at best is a decent—probably not eye-popping—value and at worst is a throwaway pick. Later, it was the run game on the docket, and the Packers doubled up at the RB spot with Jamaal Williams (No. 134) and Aaron Jones (182). That could be a very good duo alongside Aaron Rodgers. At the bare minimum, they’ll free up Ty Montgomery to roam the scheme more.”

— Mel Kiper Jr. of ESPN Insider: B+. “Overall, Green Bay hit the jackpot with King and got a pass-rusher named after the most famous Packer ever. There’s little not to like.”

— Pete Prisco of CBSSports.com: A. “Some general managers seem to always do it right in the draft, and Green Bay’s Ted Thompson is one of those guys. He had another good draft, trading out of the first round and still landing a lot of good players. He took Washington corner Kevin King in the second round, and he will be a big-time player. Second-round safety Josh Jones is a nice player who helps offset the loss of Micah Hyde. I love third-round defensive tackle Montravius Adams. Fourth-round running back Jamaal Williams will be a 1,200-yard rusher in a season at some point in his career.”

— Luke Easterling of Draft Wire: C. “Go ahead and put the Packers’ class in the ‘strange’ column, too. After trading out of the first round, they addressed their needs at corner (Washington’s Kevin King) and linebacker (Wisconsin’s Vince Biegel), but North Carolina State’s Josh Jones felt like a reach they didn’t need in the second round. The Packers took three running backs on Day 3, but didn’t touch the offensive line until the sixth round and reached for their only pass-catcher in fifth round. Auburn’s Montravius Adams was a solid value in the third round to bolster the defensive line, but otherwise, much of this group doesn’t make sense.”

— Mark Maske of the Washington Post: B. “GM Ted Thompson traded out of the opening round but got CB Kevin King with the first pick of the second round. King and safety Josh Jones, taken later in the second round, should help in the secondary. Jones also could get a look at CB, which had been a position of dire need for Green Bay. The Packers demonstrated that promising RBs could be gotten in the middle rounds of this draft by using a fourth-round choice on Jamaal Williams.”

— Rob Rang of The Sports Xchange/CBSSports.com: C+. “Seeking to fill holes in the secondary, Thompson landed a lanky press corner in Kevin King with the first pick of the second round and a hard-hitting safety in Josh Jones at No. 61. King and Jones are imposing but aren’t quite as reliable as tacklers are their size suggests. An ultra-safe (but perhaps limited) linebacker in Vince Biegel was nabbed in the fourth after the requisite gamble on a talented but highly inconsistent defensive tackle in Montravius Adams, who came off the board in the third. With Eddie Lacy no longer on the squad, the Packers needed to get help at running back, and the team found three of them on the final day, beginning with a hard-running gasher in Jamaal Williams and complementing him with similar big backs in UTEP’s Aaron Jones and Utah State’s Devante Mays.”

— WalterFootball.com: King — A; Jones — A; Adams — B; Biegel — B+; Williams B-; Yancey — B-; Jones — A; Amichia — C; Mays — C; Dupre — A+.Overall: A. “Of the Packers’ first seven picks, they scored three “A” grades, and they didn’t get anything below a B-. There were some sketchy selections late in the draft, but even then, Green Bay obtained a tremendous value in Malachi Dupre. This was an awesome draft for Green Bay.”

— Vinnie Iyer of The Sporting News: B-. “There’s no doubt, with 10 picks, Ted Thompson made sure the Packers took care of their weak spots in the secondary first. He also increased the depth of their defensive front seven and offensive backfield. They probably could have taken an interior offensive lineman much earlier, and other than King and Jones, none of the picks look in line to start anytime soon.”

— Evan Silva of Rotoworld: C. “In a deal with Cleveland, the Packers turned pick No. 29 into Nos. 33 (King) and 108 (Biegel). 6-foot-3, 200-pound King was the draft’s most athletic cornerback, posting near-100th-percentile SPARQ results and flashing an acrobatic game reminiscent of in-prime Antonio Cromartie on tape. Second-rounder Jones is another elite athlete who adds depth to a position where Green Bay has struggled to withstand injuries. On the other hand, Adams was one of the worst picks of round three and is a likely non-NFL contributor. Biegel offers a role-player ceiling at a position where the Packers lacked depth. In terms of draft value and big-league projection, I preferred Aaron Jones over Williams as a running back investment. Day-three fliers Yancey and Dupre both offer vertical-receiver potential. I do not pretend to know anything about Amichia or Mays. I think this was an average to above-average draft haul, with King and the Joneses standing out as my favorite picks. The Packers’ draft grade would be higher had they used the No. 93 selection on Carl Lawson or Trey Hendrickson instead of Adams.”

— John McClain of the Houston Chronicle: B+. “They traded out of the first round and got two starters, Kevin King and Josh Jones, for their secondary. Montravius Adams is a tough run stuffer. Don’t be surprised if Jamaal Williams is a big contributor.”

— Paul Domowitch of the Philadelphia Daily News: B+.

— Todd McShay of ESPN Insider offered his best pick for each team. For the Packers he named Kevin King. “The Packers could’ve justified taking King with their original first-round pick (No. 29), but they showed a great feel for the draft board by moving down four picks and still getting their guy. (The extra fourth-round pick they acquired in the deal turned into LB Vince Biegel). Green Bay ranked 31st against the pass last season, and got exposed by the Falcons’ Matt Ryan and Julio Jones in the playoffs. Injuries obviously played a huge role. With his long arms (32 inches), the 6-foot-3 King is a perfect fit for Dom Capers’ press-man scheme. His stock really started to rise after the combine, where he showed the speed (4.43 40), agility (3.98 short shuttle and 6.56 3-cone), and lower-body explosion (39-inch vertical) to hang with receivers on the perimeter.”