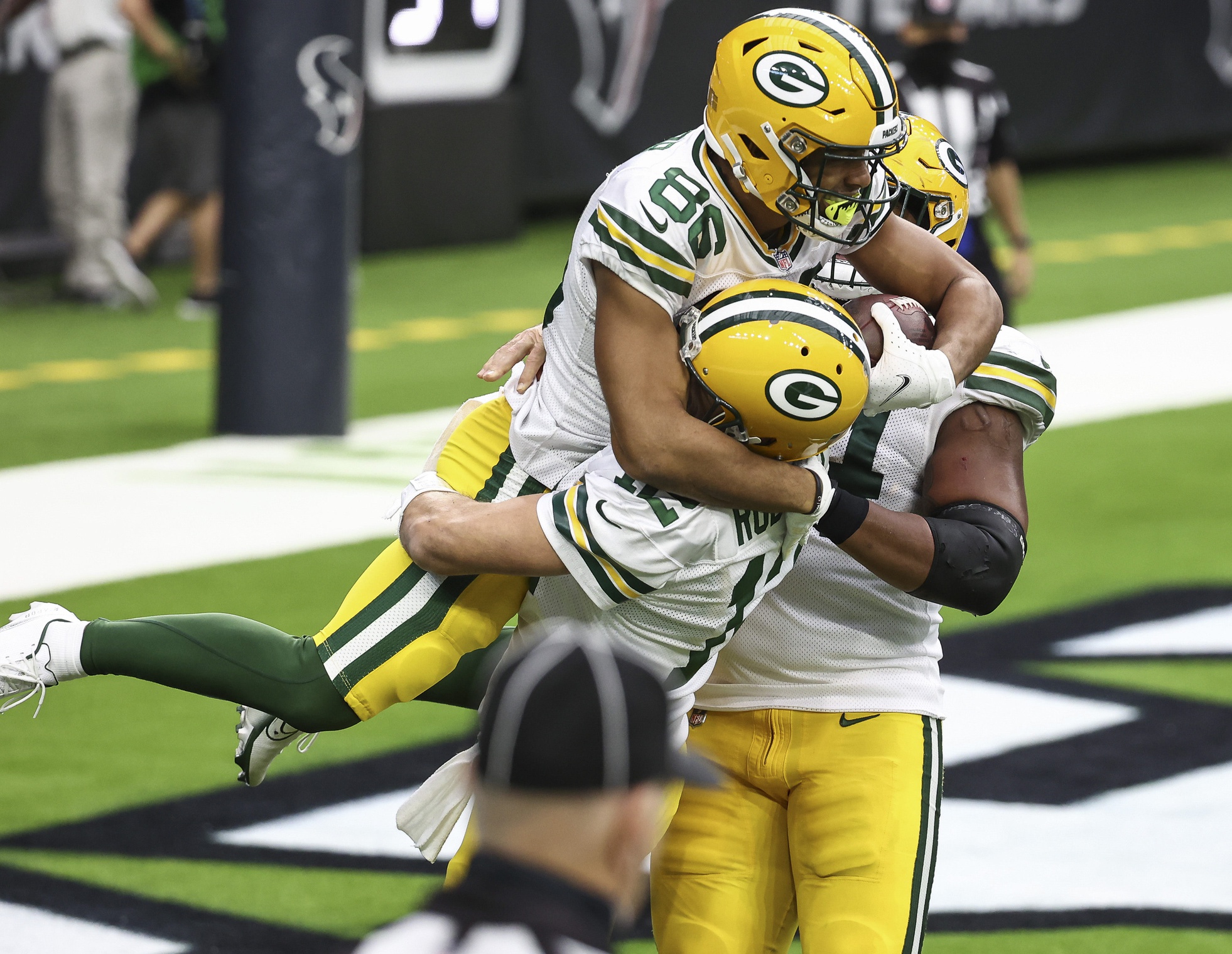 HOUSTON — Aaron Rodgers insisted that Green Bay’s lackluster performance in its first loss of the season last week was an anomaly.

And on Sunday he and the Packers proved that by easily handling the Houston Texans.

“That game is an outlier I believe and today was more in line with our first four weeks,” Rodgers said.

Rodgers threw for 283 yards and four touchdowns and the Packers bounced back with the 35-20 victory.

Rodgers played a near-flawless game and tied his season high for TD passes. The performance came after he threw two interceptions, including one that was returned for a touchdown, with no TDs in a 38-10 loss to Tampa Bay last week.

Despite being without leading rusher Aaron Jones and left tackle David Bakhtiari, Green Bay (5-1) had no such trouble handling the woeful Texans (1-6) on Sunday as the Packers built a 21-0 lead by halftime.

Green Bay’s strong day on offense was aided by a career-high 196 yards receiving by Davante Adams, who had touchdown receptions of 3 and 45 yards.

“When he’s in the game, obviously we’re tough,” Rodgers said.

Adams did whatever he wanted against Houston’s defense after top cornerback Bradley Roby left with a knee injury after Green Bay’s first possession.

“I can only eat what’s in front of me, so I’m going to go out there and play and run my routes to win no matter who’s guarding me,” Adams said.

Green Bay made it 35-13 when Jamaal Williams scored on a 1-yard run with about four minutes to go.

Deshaun Watson threw a 6-yard touchdown pass to Will Fuller with about 90 seconds left before the Texans recovered an onside kick. But David Johnson fumbled after a reception on the next play and the Packers ran out the clock.

Houston was left searching for answers after another lopsided defeat that came after losing to Tennessee in overtime last week.

Interim coach Romeo Crennel fell to 1-2 since taking over after Bill O’Brien was fired following an 0-4 start.

“We’re an inconsistent team and we showed that today,” Crennel said.

After failing to move the ball effectively in the first half, the Texans finally got on the board when Watson threw a 3-yard pass to Johnson to cut the lead to 21-7 early in the third quarter.

But Green Bay pushed its advantage to 21 again later in the third when Adams got in front of the defense to grab a 45-yard reception. It is the second game for Adams this season with at least 150 yards receiving and two touchdowns, making him just the third player in franchise history to have two such games in one year and the first since Antonio Freeman in 1998.

The Texans added a field goal early in the fourth quarter and got another one following a blocked punt that got them within 28-13 with about 10 minutes left.

The Packers took an early lead when Adams grabbed a 3-yard touchdown reception on the first possession. They made it 14-0 when Jace Sternberger caught a 3-yard TD pass early in the second quarter. That play was set up by a 36-yard reception by Adams two plays earlier.

Watson was sacked twice on one drive with about four minutes left in the first half to stall the offense. The Texans attempted a field goal after that, but Káimi Fairbairn’s 41-yard try sailed wide left.

Malik Taylor scored his first career touchdown on a 1-yard reception late in the second quarter that put the Packers up 21-0 at halftime.

Texans: Crennel said he didn’t think that Roby’s injury was major. … LB Kyle Emanuel left the game to be evaluated for a concussion in the fourth quarter.

Packers: LB Krys Barnes injured his shoulder in the first half. … S Raven Greene hurt an oblique in the fourth quarter.

HOME AWAY FROM HOME?

The home crowd, which was limited to 13,000, because of coronavirus restrictions, was filled with Green Bay fans in the team’s first trip to Houston since 2012. The stands were so overrun by Packers fans that players on Green Bay’s defense raised their arms to hype up the crowd when the Texans started a drive at their 2 in the second quarter.

“It’s always fun to come into another team’s stadium and the support we had from our fans was unbelievable,” coach Matt LaFleur said. “There were a lot of “Go Pack Go” chants. I think that provided us with a lot of energy.”

Packers: Host the Vikings next Sunday.

Texans: Houston is off next Sunday before visiting Jacksonville on Nov. 8.