Major League Baseball and the Players Association got together to announce the creation of Players Weekend on Wednesday. The newly created event with be part of the weekend of games from Aug. 25-27, and is set to feature some colorful uniforms with some unusual names on the backs of your favorite players.

According to MLB.com, Players Weekend was created as “a player-focused field festival of sorts, different than anything seen before at the top rung of the sport. In addition to nicknames on the backs of jerseys made by Majestic, players can wear and use uniquely colored and designed spikes, batting gloves, wristbands, compression sleeves, catcher’s masks and bats.”

During the special weekend, the Angels will take the diamond against the Houston Astros in these little league-inspired jerseys: 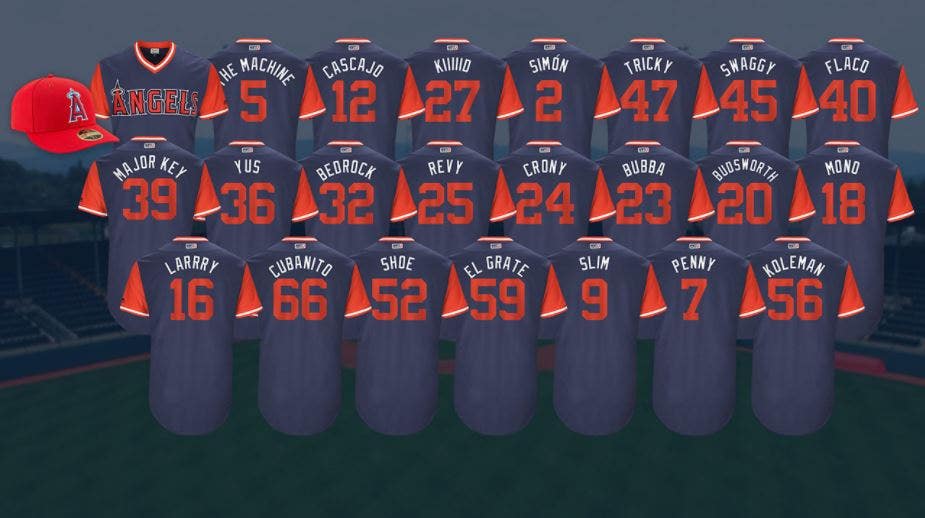 On the backs to the new unis, Angels players have the chance to express themselves with personalized nicknames on the back. We’ll see the likes of “The Machine” for Albert Pujols to “KIIIIID” for Mike Trout (“SLIM” for Cameron Maybin is our personal favorite).

In addition to the new threads and nicknames, the right sleeve of every uniform with have a patch depicting the path of a little leaguer to the pros and a blank space for players to write in the names or organization that was influential in their path to big leagues.

After the weekend, game-worn Players Weekend jerseys will be auctioned at MLB.com/auctions with 100 percent of net proceeds donated to the MLB-MLBPA Youth Development Foundation, a joint effort established in July 2015 by MLB and the MLBPA with an initial commitment of $30 million focused on improving the caliber, effectiveness and availability of amateur baseball and softball programs across the U.S. and Canada.