The Hitlist: The Top 5 Moments of UFC Fight Night 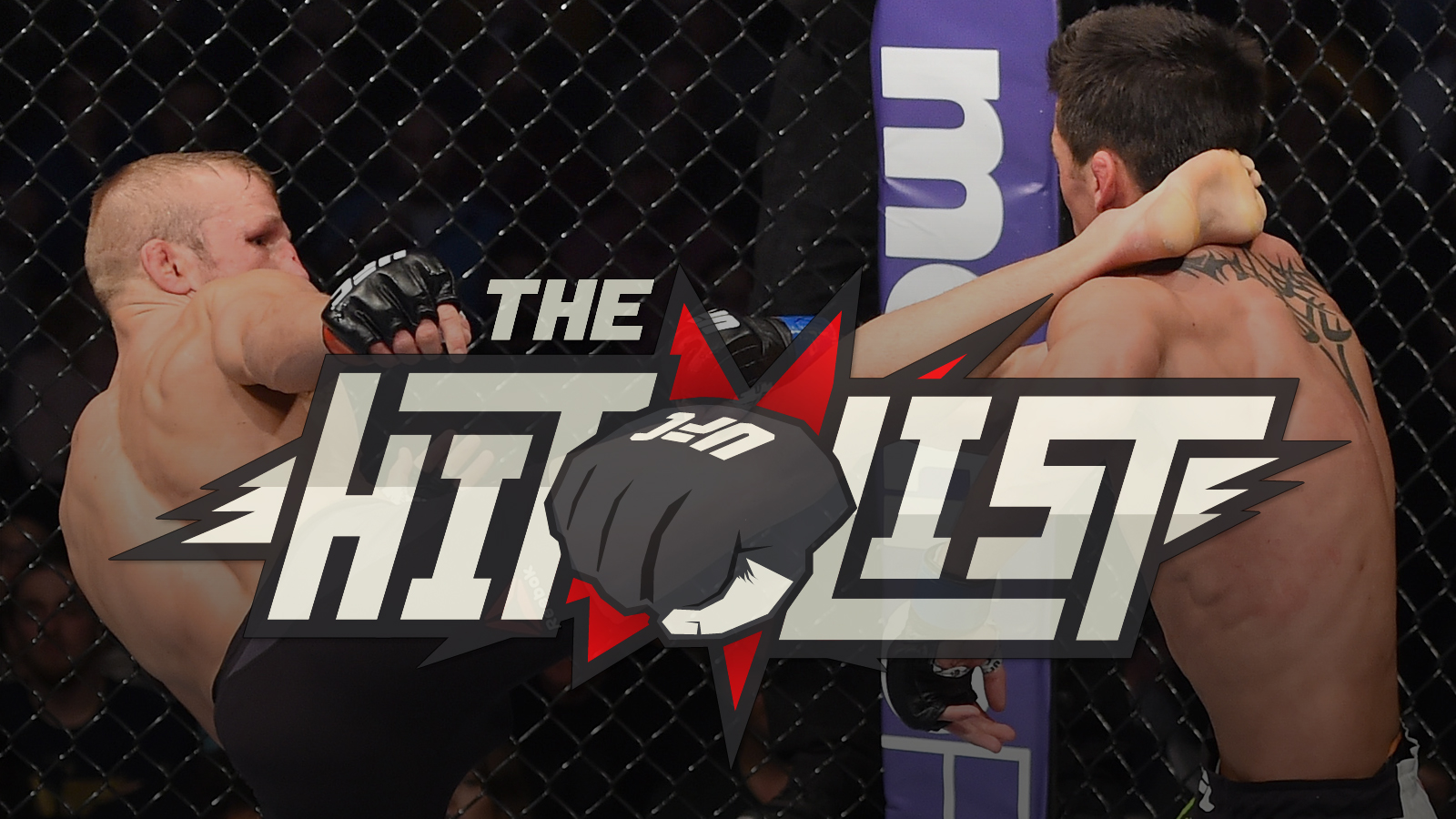 Sunday’s championship card was as good as it gets, with many exciting finishes and razor-close, exciting decisions. Still, the five moments below were our favorites.

Read on to learn why, and then tell us yours!

Yes, the bantamweight title main event ended up being a great fight and closely contested. Yes, both Cruz and Dillashaw looked phenomenal.

Let’s back up for a moment, however. Before all that, it was simply fantastic to see the injury-plagued Dominick Cruz fight again, period.

He is one of the best fighters in MMA history, but has missed out on the sport’s latest boon in popularity because of three ACL surgeries and a torn groin. At least until Sunday night.

Finally, Cruz had the stage he’s earned, and he shone on it. I had no favorite in last night’s headliner, and would have been equally happy for a clean fight with either man winning.

But I have to admit that I was rooting for Cruz to at least make it to the bout, relatively healthy, and able to show what he’s made of. He did, and accomplished much more than that.

Neither man being wrong

Both Cruz and Dillashaw insisted that the other had never faced an opponent like them. Heading into the grudge match, both champs said that they’d have more success against the other than just about anyone had, prior.

The great thing about Sunday’s instant classic was that neither man was proved a liar. Either could have reasonably been seen as the victor, and both had many moments of success against the other.

Cruz became the first fighter to out-wrestle Dillashaw, and showed that he still has the smoothest footwork and angles in MMA. Dillashaw hit Cruz more than he’d ever been hit before in a fight, and never looked out-classed against the man he’d largely modeled himself after.

No one was exposed as less than they claimed to be, as both men rose to the moment. There couldn’t be two official winners, but neither loses any standing as far as I’m concerned.

New options for the bantamweight division

If we’re fair, Raphael Assuncao deserves the next bantamweight title shot. The Brazilian-American has been in line for a title fight since beating TJ Dillashaw but has been kept on the sidelines with injuries.

When he recovers from a recent surgery, he could be an exciting new challenger for the title. Of course, Sunday’s great fight could warrant an immediate rematch that few could complain about.

What’s more, there’s a third compelling option for a title challenger – Urijah Faber. Faber has split two fights with Dominick Cruz and is coming off of wins.

If he were to win, he’d be set up for a grudge match against his former teammate Dillashaw. That would be pretty sad, but at least it would be fascinating.

The point is, the bantamweight division is as exciting as it has ever been, at the top.

Eddie Alvarez’s entire career is a highlight reel. The Philly fighter has always been a blood-and-guts fighter.

He’s also a skilled and well-rounded fighter. Thankfully, he remembered that, Sunday, and fought with the best strategy to give him a chance at beating Anthony Pettis.

Fans in the arena booed Alvarez after he was announced the winner. Perhaps they didn’t appreciate how he mixed takedowns with hard-swinging stand-up striking exchanges.

Well, they can go kick rocks.

I just wanted the best man to win Sunday night, and didn’t have a preference for who would come out on top, but I am a fan of fighters using everything at their disposable to win. That, of course, should include their minds and all facets of their physical skills.

Alvarez is a KO artist but was a wrestler first, and he used that to great effect against Pettis. The truth is that if Alvarez would have refused to use his grappling and insisted on a kickboxing fight with Pettis, he would have lost.

Pettis is a sniper and too refined a striker to fight him in that realm alone. All Alvarez did was assess the fight in front of him, come up with and effectively implement winning tactics.

Alvarez was the aggressor at almost all times during their fight, and edged Pettis out because he was stronger in one area than the former champion. That’s how fights on the highest levels are usually won.

Especially in great fight towns like Boston, it is always satisfying to watch local-area fighters get chances to impress their friends and families. Boston has been great to Rosa, as his two UFC victories have come there, inside the Garden.

He prevailed in a close, hard, fight after a week of uncertainty that saw him have to prepare for three different opponents. Font returned after a long layoff and continued to impress as a devastating striker, en route to his second stoppage win in as many UFC bouts.

The crowd loved it, and both men are still likely smiling from the experience.