Matt Riddle is featured in High Times magazine, because of course he is

For those of you not familiar with former UFC star Matt Riddle, well, just picture Towelie with muscles and you’ve pretty much got the idea. The TUF 7 alum was primed to have a long career ahead of him in the UFC, but then one day (well, several days), he just sort of got high and wandered off. More specifically, he failed two drug tests in three fights, received his walking papers, and then proceeded to go on a series of anti-UFC rants that ensured the promotion would never have him back. So Towelie with a slightly less sunny disposition, then.

After signing with LFC (Legacy Fighting Championships) and having his contract immediately bought out by Bellator, Riddle suffered a rib injury just days before his promotional debut and retired from MMA, only to un-retire a month later, pull out of another fight, get fired by Bellator, and sign with Titan Fighting Championships last week. That last sentence was so scatterbrained I felt stoned just writing it.

If Riddle’s appearance in the new issue High Times magazine is any indication, it appears that he is taking his new fighting gig about as seriously as he did his old one(s). Yes, Riddle (pictured above with what Nick Diaz throws into his pancakes each morning) will be receiving a multi-page spread in the March edition of the popular marijuana-centric magazine, according to a tweet sent out by the publication yesterday. The exclusive interview is said to cover everything from Riddle’s notorious falling out with the UFC, to his current training regimen, to which brand and flavor of corn chips truly tops them all (FYI, the answer is BBQ Fritos). 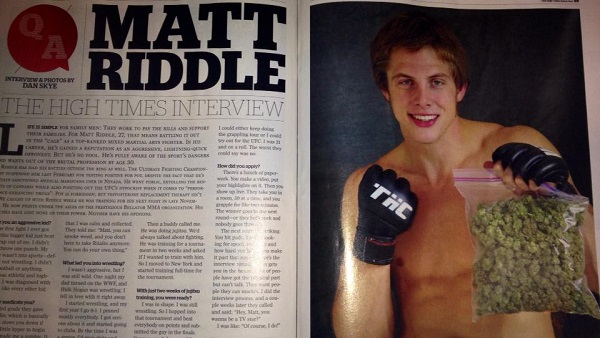